Carrying on the theme...

Thursday
Breakfast was better than I was expecting.  I made some of these bagels (with spinach instead of kale) yesterday, but ended up leaving them to rise a little too long after they'd been shaped.  This resulted in four huge but rather flat bagels.  They looked alright when I sliced into them though, so I put three in the freezer pre-sliced, and kept one aside.  I toasted it and had it with marmite and soy cream cheese.  Yum!  And due to the size, it was very filling.  It also took care of about half my daily iron requirement ;)

For lunch I made some protein fries - CCK is right, they're addictive!  I ate the whole 370g batch!!  And a salad, because just eating tofu fries would be weird.  I seem to prefer my salads naked (ie: no dressing).  Anybody else like that?  Or is that just me...?

Dinner was curried roast vegetables.  I couldn't find a 'recipe' as such, so kinda just winged it a little.  I grabbed an assortment of vegetables - three little potatoes, three radishes, three stalks of celery, three mushrooms, a carrot, a parsnip, and half an onion, and chopped them all up into chunks:

Ooh, look at the pretty colours!  I threw them in a bowl then drizzled over 1 tbsp rice bran oil, a large teaspoon of minced garlic, a decent grind of rock salt and pepper, a teaspoon of paprika and 2 tsp mild curry powder:

I baked it all for about 45-50 minutes until they were all cooked through and tender, and served it up with some brown basmati rice: 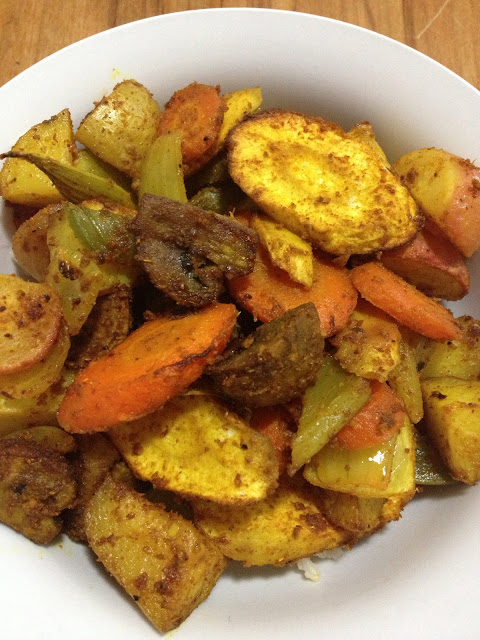 Surprisingly good, although I kinda wished I'd only used one mushroom.  I got a little sick of them towards the end... 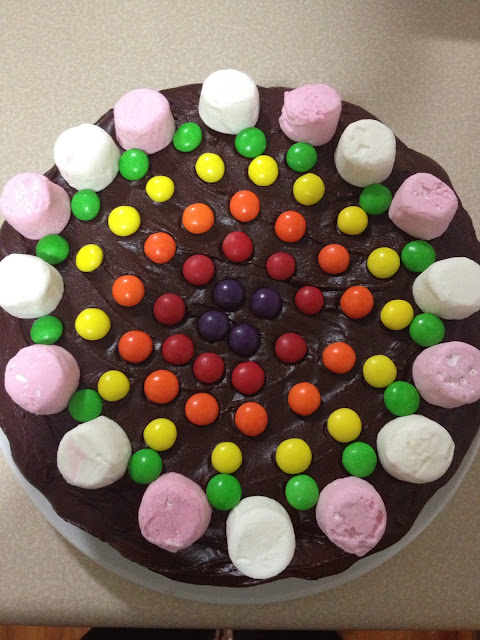 The hugest, bestest, yummiest chocolate cake ever, covered with chocolate icing and lollies!  It was nearly 3" tall!  (And full of butter and sugar, in case you were wondering...)  I knew it would sell out, but I didn't bet on it selling out before my kids managed to get a slice!  Poor T, who had been looking forward to it since I showed him the finished cake last night, watched all the other kids in line ahead of him buy every single slice before he got to the table.  He was a little disappointed and ended up buying a much less awesome slice of somebody else's cake :(  At least he didn't have to resort to buying a store-bought biscuit I guess... This was the main reason why I decided to make chocolate pudding.  That, and X had been home sick all day so had also missed out on the cake.  I figured they deserved some chocolatey goodness ;)  I may even make them another chocolate cake on the weekend, depending on how my Saturday rolls out.

With X home all day, and the weather being rather soggy, I didn't get out for a run.  Instead, I spent some of my morning organising this lot: 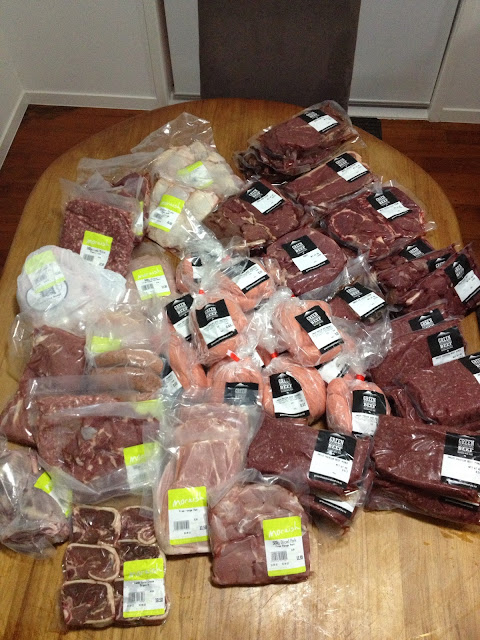 This is what happens when you order four months worth of meat from two different online companies (Green Meadows Beef and Moreish Online) on the same day, and they're both so awesome and efficient they send your order out via overnight courier that same day, and it arrives the following morning at 5.38am.  And they both happen to use the same courier company.  I felt a little sorry for the driver having to deliver my four boxes choc-full of meat in the rain.  He was very quiet though, I barely heard the gate close behind him.  Awesome guy, my courier driver ;)

I have a little whiteboard on the wall in the laundry where I keep a list of everything in the chest freezer, so I don't have to dig through looking for things - I already know what's in there.  As long as I remember to wipe off a wee mark whenever I take something out I'll always know exactly what I've got on hand, which makes it much easier to meal plan.  Here's the list after this morning's deliveries: 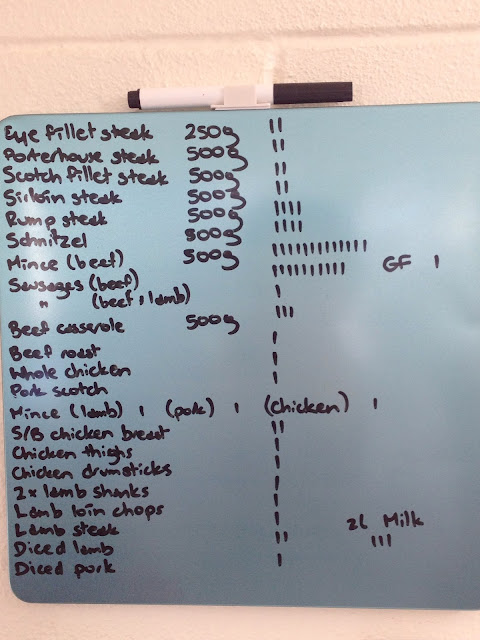 This should keep my omnivorous boys happy for a while!  I admit it felt a little weird sorting out all this meat when I've just begun a wholly plant-based diet.  I'm actually starting to wonder if I will go back to eating meat next month...  I don't miss it at all.  Having said that, it's only been two weeks ;)

Friday
Breakfast was a fairly simple affair this morning.  I really wanted a big hit of fresh fruit, so I chopped up an orange, a gold kiwifruit, a banana and the last remaining strawberry for a lovely fresh fruit salad, topped with some soy yogurt: 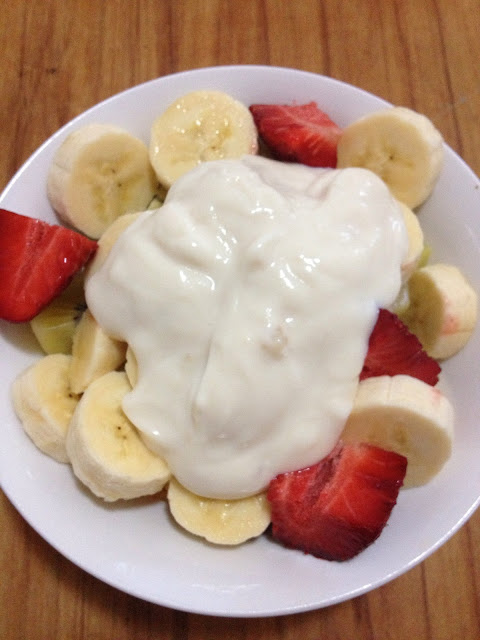 Sometimes there's just nothing better :)  I'm tracking my food intake and keeping an eye on the levels of various vitamins and minerals for this month-long experiment using MyFitnessPal.  It's great, but the daily recommended level of sugar seems a little too low to me.  After breakfast I was already well over the suggested 32g for the day.  In fact, I have exceeded the recommended sugar level every day without fail.  But you know what?  I really don't care.  The stuff I'm eating isn't bad - the sugars are mostly fresh fruits, maple syrup and agave syrup - so MFP can suck it.

I'm finding that when recipe creators say that the flavours of a sauce or a dish will develop over a period of time, they're not lying.  Case in point: I made this mayonnaise yesterday afternoon - the creator said not to adjust seasonings straight away, but to leave it for an hour or so to develop.  Glad I took heed, because that evening it tasted exactly right.  I didn't have any grapeseed oil, but it worked perfectly well with rice bran oil.  Just look at that creamy goodness: 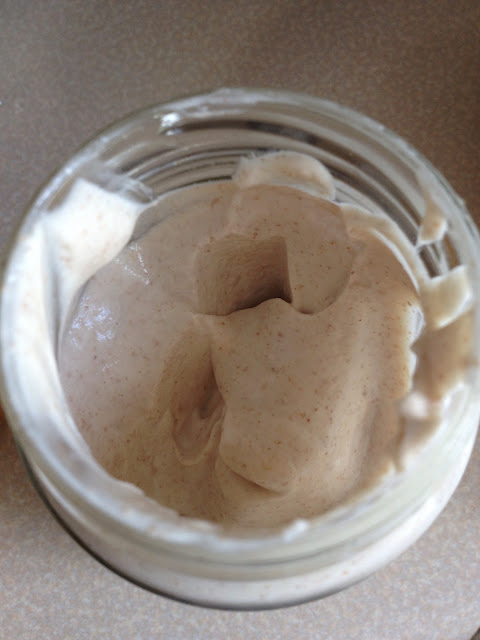 If I'd added more salt and vinegar as Deane suggested it needed, it would've tasted awful.  My first homemade mayonnaise = success!  (Unlike that time I tried to make aioli for Deane...)  Also, that chocolate pudding we had last night really does taste better the next day.  I had some as part of my lunch - sooooo much sweeter and much more delicious!  So glad there's leftovers in the freezer for another day :)  The pudding for lunch was the second course - I decided I'd earned it, running a pretty darn quick 7km in the morning.  The first course was a 'chickpea salad sammich': 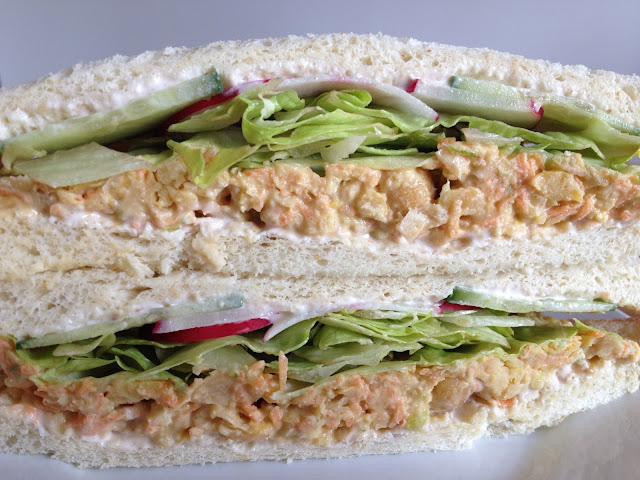 This is what the mayonnaise was for.  Sooooo gooooood!  Chickpea salad is awesome!  I had cucumber, radish and iceberg lettuce in my sandwich, along with the chickpea salad and some extra mayo.  Yum!!

And I am once again really looking forward to dinner - the boys are having burgers.  So will I, but instead of a meat patty, I'm having a vege burger patty.  I made the mix up this morning and put six patties in the freezer - Deane's going to try one of the vege patties alongside a meat one.  He helped me sample the raw mix this morning to see if it needed any extra spices (just a little salt).  The raw mix tasted pretty good, so I can only imagine it's going to taste even better cooked in a burger.  I made a pesto to go in my burger along with some more of that yummy mayo and salad:

Throw everything into a food processor and whizz it up until you reach your desired consistency.  Makes one cup. 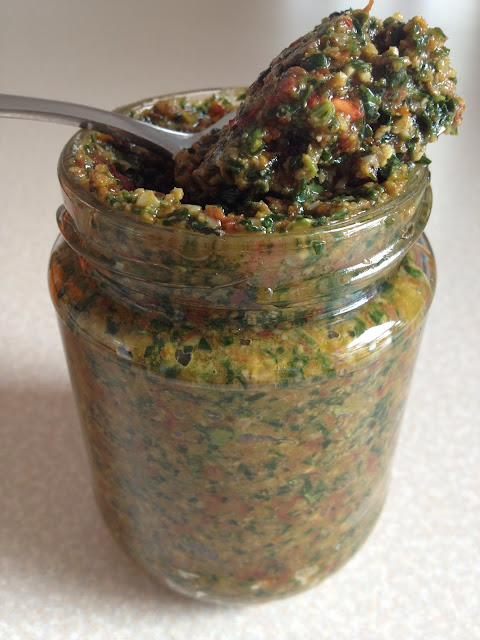 This vegan food just keeps getting better and better!!
Posted by kreachr at 12:43