Way back last year, I signed myself up for the Unitec Run Walk Series, the Auckland Half Marathon, then early this year I added on the North Shore Half Marathon.  Call me crazy, but it seemed like a good idea at the time.  Well, I'm now over half way through that list of race events, with the 14km Unitec run this Sunday.  Which leaves just the 16km Unitec race and the Auckland Half Marathon to go...  Then there's the Cancer Society nighttime half marathon walk which, thankfully, is not at all a race, just a fun evening to get together with others in the same situation, remembering loved ones that have passed on (please donate to my fundraising efforts!!).  I think after all that, I will have earned myself a bit of a break!  I'm planning on taking it easy over the Christmas/New Year period, and will look at getting back into it in February once the kids have gone back to school.  I'll continue running of course, but will take it a little less seriously with shorter runs, less long runs, and probably slightly slower paces.  Perhaps a little more yoga and strength training.  Or maybe just the yoga ;)  Next on the menu, picking a full marathon to sign up and train for...  I'll probably just stick close to home and go with the Auckland Marathon.  It's not 'til late in the year - plenty of time to train for it ;)

Now, back to vegan foodie goodness...  I thoroughly enjoyed my dinner on Friday night - the vege burger with sun-dried tomato spinach and basil pesto, and vegan mayo.  It was ridiculously delicious!  I had a large handful of baby spinach leaves in the burger as well, and that topped it off nicely.  Unfortunately, we were out of tomato :(  If I'd had the option, I'd have gone for a whole wheat or whole grain burger bun.  All we had were white burger buns.  Oh well.  It was still good :)  I was really naughty and had more chocolate pudding and ice cream for dessert.  Totally blew my calorie count for the day, but does this look like a face that cares? 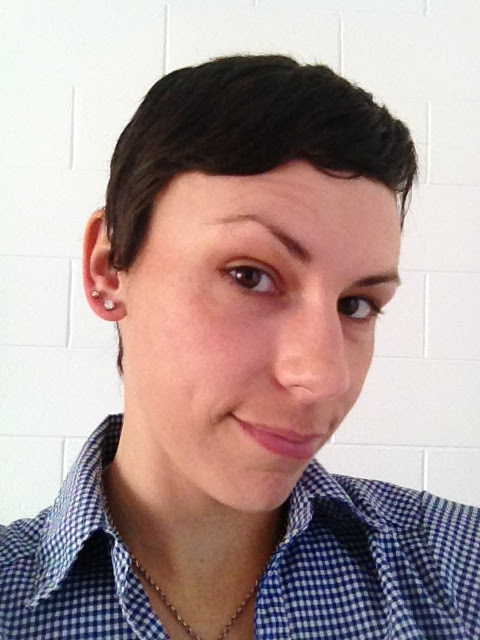 Saturday
Since I was totally not caring about the whole 'chocolate overload' thing and carrying on the theme from the night before, I decided to make some chocolate brownie pancakes for breakfast.  It turned out to be the cutest, most delicious little mini pancake stack ever!  I had mine with sliced banana and maple syrup, because although the original picture on the CCK website looked good, dusting it with icing sugar and smothering it with chocolate syrup seemed a little like overkill: 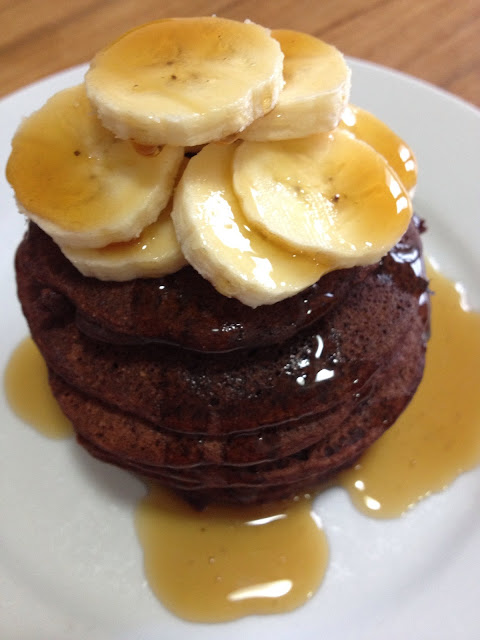 Omnomnom!!!  Deane and the kids left for a weekend-long errand so I had the house all to myself, which gave me time to catch up on things like laundry, and I got to watch some more Dresden Files.  And read some Dresden Files.  I lurve me some Harry Dresden...

Since I was alone, I decided it was up to me to eat all the leftovers that were floating around in the fridge.  So lunch was pretty much a repeat of yesterday, sans second course - ie: a chickpea salad sandwich.  Although this time I had it with spinach, and a lot more radish and cucumber.  Yum.

I snuck in some baking during the afternoon while the weather was really packing it in a bi-polar kind of way.  Still not entirely enthusiastic about the recipes available to use up almond pulp from making almond milk, I decided to have a go at one of my own.  Thus, I have created:

Mix together the flaxseed and water and set aside.  Preheat oven to 180°C and line a baking sheet with baking paper.  While the oven is heating, place the almonds in the oven for about 8 minutes to toast lightly (this step is optional).  Don't forget to take them out!!  Mix together the flour, baking powder, salt and sugar.  In another bowl, combine the applesauce, flaxseed mix, vanilla and orange zest.  Pour this into the dry mixture along with the almond pulp, toasted almonds and dried cranberries then stir it all together until well combined.  Split into two and shape into loaves on your baking sheet.  Bake for 35 minutes, then remove from the oven and allow to cool 5-10 minutes before slicing into 1cm wide slices.  Return the slices to the baking sheet, sliced side down, and bake another 10 minutes.  Take out, flip over, and bake a final 10 minutes on the other side.  Allow to cool completely before storing in an airtight container. 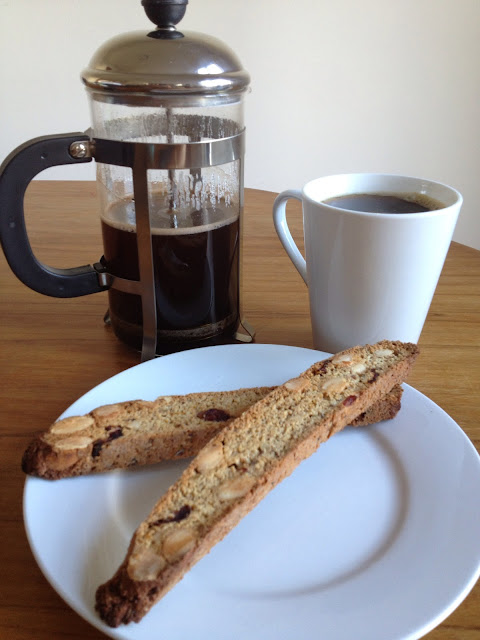 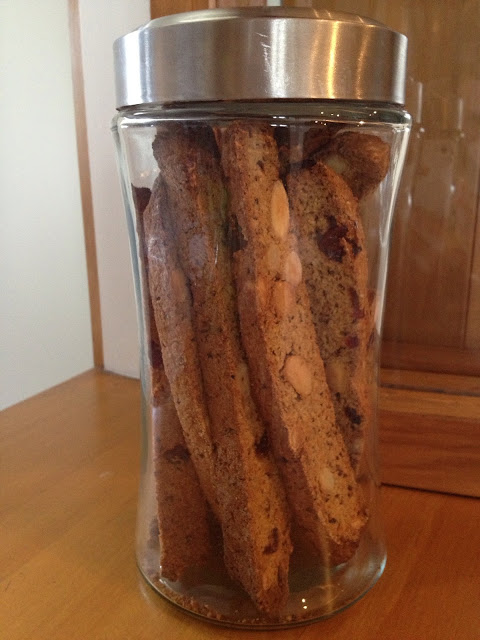 I'd never made biscotti before but always wanted to.  Now I have :)

Dinner was more leftovers - curried roast vegetables with brown basmati and the last of the lettuce and celery salad.  I didn't need much after scoffing taste-testing a whole bunch of biscotti ;)

Sunday
The birds were chirping their heads off at 4.30am - I've noticed that a few times lately.  I always thought they got chatty when the sun was rising.  Either the sun rises a lot earlier than I thought it did, or I've been wrong my whole life...

I got up at 6.30am and had a hearty breakfast of a giant spinach bagel with marmite and soy cream cheese.  Seriously, those things are just too big.  If I make them again, the dough will be split into six instead of four.  Soooo full!  This was not helped by also having a giant cup of tea...

At 8.20am I headed out the door for my race.  By the time I got on the road after putting on my shoes and attaching the timing tag, getting the right sets of keys, sorting out the car and the garage door and everything, it would've been closer to 8.30.  I missed the turn off into El Kobar Drive (stupid missing road sign, grr) and had to backtrack, then it took me a while to find a park and I ended up being about 1km from the start line.  Deane's stupid car alarm was playing up and I couldn't get the car locked and the alarm on without it going berserk.  Dramas!  I could hear them counting down for the start of the race as I was pinning my number to my shirt while running to get to the start.  I scooted around the barriers and crossed over the start line right at the back of the pack with the walkers, then had to weave my way through them and the slower runners to get to where I wanted to be in the running pack.  Phew!  Close call!  Next time I'll aim to be at least 15 minutes early...  The course was a relatively flat one, which made a nice change.  There was a rather unpleasant odour at one part of the course near a plastics factory, so I tried not to breathe through my nose at that point.  Otherwise it was relatively nice and quiet, with very little traffic.  Ah, the benefits of an industrial park on the weekend :)  The second lap was almost like a normal Sunday run, since the number of people running had significantly dropped.

I tried to smile and wave for every photo so they're probably going to be the dorkiest running photos I've had to date - I'm looking forward to looking at them and laughing my butt off - I'll be sure to post a link so you can all have a good laugh too :)  Unfortunately, once again, I forgot to stop the timer on my phone app so according to the timer my last kilometre took nearly 11 minutes!  Oops...  Sadly, there were no Abe's Bagels this time around.  Bummer.  I grabbed a banana and some water though, and had a chat to the guy I was talking to during the last race (you know, the 'thumbs up' guy).  My official net race time was 1:11:30 - I finished 24th out of 197 overall, and 5th out of 119 women.  My second lap was evidently over a minute slower than my first.  Still, not a bad result, and one I'm happy with.

Once I got home and had a shower, I sliced up the banana and made little mini PB sandwiches: 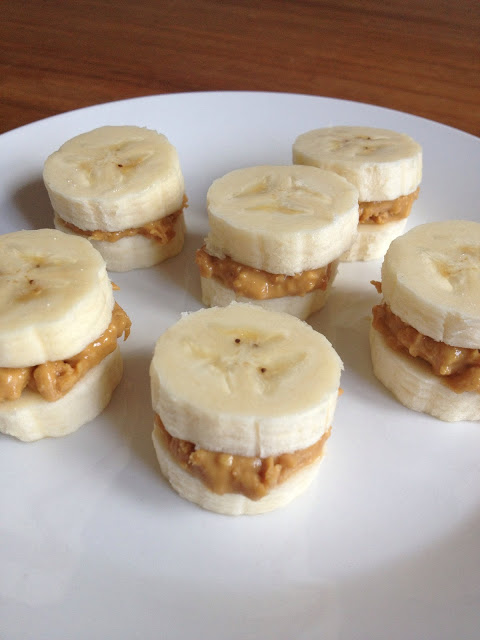 Simple, delicious, and the perfect post-run protein hit.  Lunch was chickpea salad.  Again.  Next time I'll make a half batch.  Rather than a sandwich this time, I had it with a couple of endurance crackers.  I like to change things up a bit while sticking with the mainstream.  It's how I roll ;)  I also had some almond biscotti with a cup of tea.  More biscotti ideas are floating in my head, and I'd love to try them out soon.  Let me know if you want to be a taste tester - a girl can't eat her weight in biscotti and get away with it, you know!

Dinner is going to be pretty simple - 'mac and shews' with some steamed broccolini.  Cashews are just awesome.  I love them.  What interests me about this recipe though is the use of sauerkraut.  I'm looking forward to trying it!  I've only ever had sauerkraut in a reuben sandwich, so this should be a little different :)  Think I'll make a half batch though.  I doubt the kids will eat it, and it's got those pesky carbs that Deane doesn't like in the form of pasta.  Mmmmm, pasta...

You may have noticed a slight difference in the home page of this here blog - I spent a little time (when I should've been writing that assignment - day six of procrastination and counting...) reorganising things a little.  You can now click on the links at the top and access the recipes I have created, or find what recipe sites I'm currently using (such as Chocolate Covered Katie, Oh She Glows, The Oatmeal Artist etc), or even where I source my food.  Grass fed beef, organic and free range pork, chicken and lamb, or fresh, locally grown fruits and vegetables and free range eggs.  Not to mention my latest favourite supplier of nuts, pulses, legumes, dried fruits etc etc.  I've also included a page of yarn and knitting/spinning suppliers that I have used in the past and been very happy with.  I say 'in the past' because I haven't bought any yarn since February (I'm trying for a year-long yarn diet and I think I may just make it.  Surprisingly, not as hard as I thought it would be).  But these people are all good, nice people that are a pleasure to deal with, and I just want to share the love.  Man, if I had a dollar for every time... ;)