Hello my name is kreachr...

...and I'm a bakeaholic/foodaholic/kitchenaholic.  I am imposing a baking ban on myself for the remainder of this vegan trial month.  Read on to find out why...

Friday
The morning didn't start out as planned.  I was happy to discover that the impending head cold was not particularly aggressive (at least not so far) so I wouldn't have to spend the entire day blobbing on the couch.  I made tofu scramble for breakfast, but I wasn't at all impressed.  I've tried tofu scramble before and didn't think much of it, but at the time I thought it might have been the nutritional yeast as it was a fairly new ingredient to me at that point.  This morning there was no nutritional yeast to blame - it was just tofu, turmeric and some salt, with a few leftover vegetables thrown in.  Blah.  I think I'm just not a tofu scramble kind of person...

I spent most of the day, once again, in front of the laptop working on my assignment.  So again, lunch was a reheat of leftovers - today it was the lentil meatballs in tomato sauce.  I took a wee break midday and baked some muffins with blueberries instead of strawberries.  Again, I was underwhelmed.  Perhaps because I used splenda instead of actual sugar...  I'm not a huge fan of the taste, but I have it in the cupboard and I'm trying to use it up.  I was feeling a little morose after that, so just went back to the computer.  Things started looking up soon after when I finished writing my assignment, did a quick review and final edit, then submitted it online.  I was pleasantly surprised to find that I had enough time left for a 10km run so headed out on my 'Tamaki Out & Back' (there's a run name for you there, Sheryl!) and had a quick shower before the boys arrived home from school.

Then it was back into the kitchen where I whipped up another batch of almond milk - my nut milk bag arrived in the mail today, woohoo!  It is soooo much easier to strain the milk through than my homemade bag.  Awesome stuff.  I decided to try a double batch of freezer fudge to use up the pulp - it's in the freezer awaiting the taste-testing later this evening.  Hmm, might have to make that tomorrow now, because I also ended up making some of these brownies.  At least one resounding foodie success today!  The kids ate it happily, Deane enjoyed his piece so much he snuck another one two (btw, he corrected this, not me!  Cheeky...), and I've already devoured three four pieces myself.  Luckily it's only 102 calories per piece...

Comparatively, dinner was rather low-cal:

Kale with sliced cucumber, radish, and little wedges of tangelo.  I had it with the leftover lemon poppy seed dressing from the salad the other day.  I was quite surprised at how fantastic this salad tasted - the combination of flavours was really quite good.  I ate the first bowl so quickly I forgot to take a picture.  So of course I had to have a second bowl... ;)  Sadly, I am now all out of kale.  On the plus side, we're getting baby spinach in next week's Foodbox, hurrah!  Spinach is awesome for everything.

So anyway, it occurred to me while I was munching happily away on my fourth slice of brownie that perhaps I need to step away from the kitchen and stop baking for a bit.  I'm starting to get a little too sugar-happy.  Easier said than done I guess.  I would need to commandeer Deane for cooking duty, and I'm not sure how that would go...  I doubt he'd be willing to whip up a batch of banana french toast for my breakfast tomorrow morning...  Guess I'll just have to be a little better at balancing the food groups.

I did end up trying that freezer fudge.  It's pretty good actually.  As always my sugar intake is way over for the day, but on the same note, my iron intake is over 100% for the first time, so yay for that!  I guess the food choices weren't too bad today after all.  As long as you don't count the fifth slice of brownie and the brazil nut ice cream before bed...  I think I need a lock on the door after 8pm...

Saturday
I made that banana french toast, and can honestly say I prefer the tofu french toast.  There is quite a strong cooked-banana flavour (that I am not overly fond of) with this version, which is not surprising considering it's a main ingredient.  It was perfectly edible, I just don't think I'll make it again.

I was thinking of going to ParkRun today, but when I had a look at my stats on the Nike website I saw that my next run would be my 200th (on the app), and I've run 990km this year (not including those three runs I didn't track).  So I kinda want my next run to be a fairly decent one, at least 10km in any case.  I'm thinking an 18-20km tomorrow might do the trick - fingers crossed for good weather!

Having munched through another two pieces of brownie (before 9am) I'm putting myself on a baking ban for the foreseeable future.  No baking of any kind.  At all.  The boys will have to eat store-bought cookies and bread for a while I think, just to be on the safe side.

Lunch was the rest of the lentil meatballs (so good!), and the last piece of brownie.  I had to get rid of it somehow ;)

The rest of the day was spent doing housework that I had neglected over the week because of my assignment (at least that's my excuse), and making some more granola since I'd run out.  This time I tried cinnamon bun granola, which is a recipe by Lisa Pitman and Nicole Axworthy in their ebook Tiny Treats, shared on the Oh She Glows blog.

I tried a little bit once it was cooled and was surprised to find it wasn't nearly as sweet as I was expecting.  This is very likely a good thing.  I had made a special trip to the supermarket to buy buckwheat groats for this recipe and as it only used half a cup I had heaps left.  What else to do but make more granola?  This recipe caught my eye, and I'm looking forward to trying a bit with a green monster smoothie next week when that spinach arrives in the Foodbox.  I've sampled a wee bit of it (okay, quite a bit of it) and it is rather yummy.  I am surprised at how moreish it is - buckwheat is awesome, y'all!

I love spending time in my kitchen, but it's rather small and quite limited on storage space.  My 'baking' cupboard is usually overflowing with ingredients and it gets a little annoying when stuff flies out at you when you open the cupboard door.  So I stood around for a while thinking about what I could do, and finally settled on this: 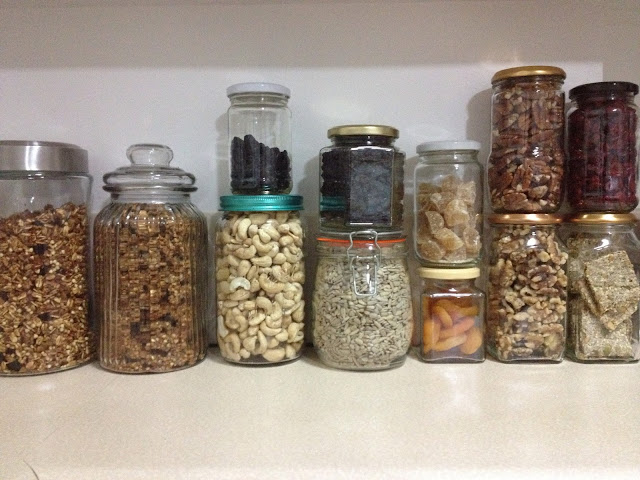 From left to right, top to bottom:  cinnamon bun granola, buckwheat granola clusters, dried blueberries and raw cashews, currants and sunflower seeds, crystalised ginger and dried apricots, pecans and walnuts, dried cranberries and endurance crackers.  To the immediate left of this picture is the rice bubbles, weetbix, rolled oats and a giant container with 2kg blanched almonds - easy access for the almost-daily batch of almond milk :)  I spent about an hour removing labels from jars, washing them, filling them, and arranging them until I was happy with how it looked.  I guess when I decide to do something, I like to do it well.  I'm glad I kept all those jars now!  I could add even more to this collection (macadamias, pistachios, pumpkin, chia and flax seeds, etc etc, but I ran out of bench space and jars).

We had vegetable stir fry for dinner (the boys had chicken and/or noodles as well), then we had friends over to watch a movie so I managed to offload a couple of pieces of that crazy-dangerous sticky date pudding.  Of course I had a piece myself (how could I not?) and that leaves one lonely piece remaining in the freezer.  I can't guarantee it'll still be there next week...  I also had a muffin.  I'm the only one eating them, and I'm starting to wonder why I made them.  Oh right, I wanted to use up the cashew oat milk...

Sunday
We had a rather fabulous thunderstorm between about 2 and 3.30am.  It was just wonderful.  Then the boys and I got up at around 6.30am.  I had intended on having a chickpea pancake for breakfast but when I walked into the kitchen I suddenly became very lazy and decided to just have a couple of muffins and a cup of tea instead.  Six muffins left.  They may just have to quietly disappear (and not into my stomach).  I have a feeling they wouldn't freeze very well.

Another hour for my breakfast (if you could call it that) to settle, then I'm heading out the door for my run.  Might have to make it a 15km looking at the weather.  It doesn't appear too bad looking out the window, but it's supposed to rain all day and Auckland weather is very changeable so the probability of it absolutely pouring down while I'm out is very high.  My planned run to Cornwall Park and back is probably not the best option.  And I need to have enough time afterwards to get showered, dressed, and into town for knitting :)  Mezze Bar again today, I think I'll have the lentil soup...
Posted by kreachr at 07:57