When running the sheep trail around Cornwall Park, you never quite know what you're going to encounter.  I would quote Forrest Gump here and say it's 'like a box of chocolates', but you do know what you're going to get in a box of chocolates because they always have the little pictures of each chocolate telling you what's inside them.  Sorry Forrest.  Maybe boxes of chocolate used to be different back in the day...  In any case, I thoroughly enjoyed my run today, taking it slow and enjoying the scenery and local wildlife.  Although its not really wildlife when you can get within half a metre of them and snap photos without them batting an eye...

I was determined to add a run up One Tree Hill as well, because it had been a while since I'd done that.  I did consider walking up again after my run to take a few more scenery pictures, but a) you've already seen it, and b) it had become rather overcast by the time I'd finished so they wouldn't be as good anyway.  Still, the ones I did take while running the two laps around should keep you amused :)  I got the trek up and over the hill out of the way first off, then headed around the outside of the park.  On my first lap, I encountered this handsome fellow: 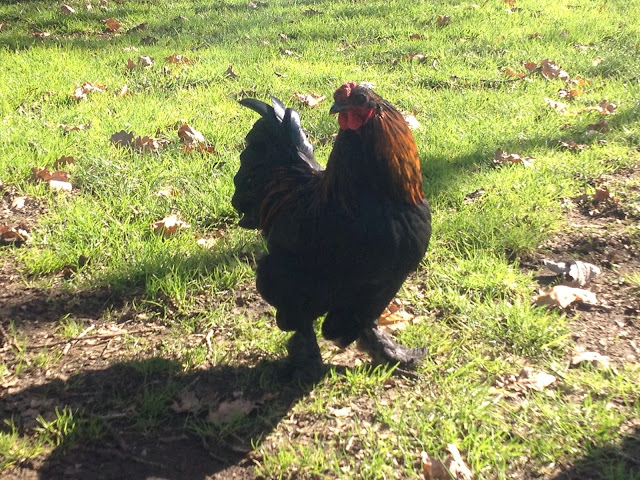 I can honestly say I haven't met him before.  Isn't he dashing?  I was also rather pleased to be able to capture a few lovely pics of the lambs and calves - a much better attempt than last time at least: 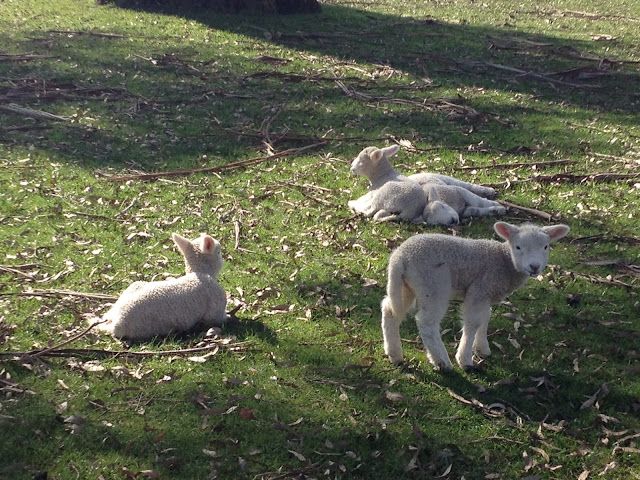 One of the little lambs tricked me.  It was lying across the path, looking rather little lifeless.  I was concerned briefly about the state of its health, but was quickly reassured when it suddenly looked up, saw me coming, and hopped out of the way.  Bless. 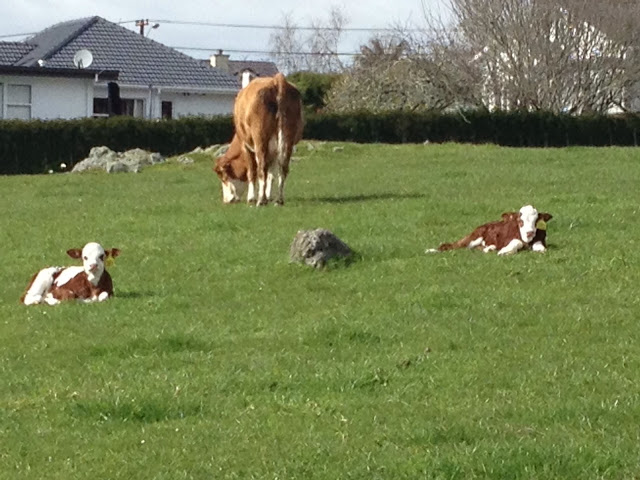 Oh my gosh, the cute!!!  And I spotted these wee lovelies near the end of the first lap: 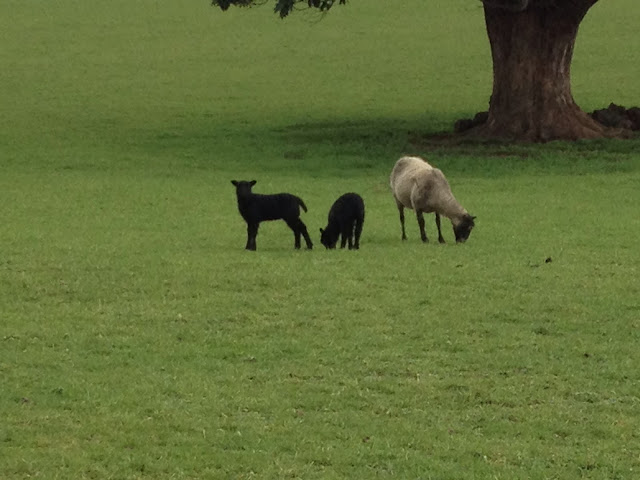 Black fuzzy lambs covered in woolly goodness!  Just imagine all the beautiful things that fleece could be knit into...

The second lap was a little more adventurous than the first.  You may think this odd since it was exactly the same park and exactly the same route on exactly the same day.  However, whilst both laps involved a little commando-crawling under electric fence wires and some dodging and weaving through cows: 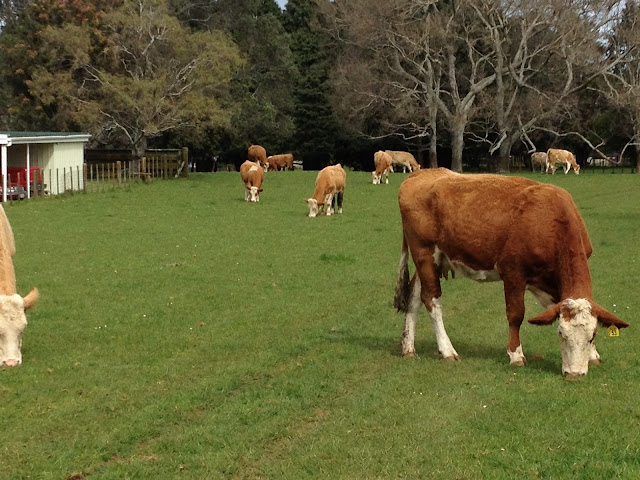 The second time around there was a herd of cows and their calves all congregating around the gate and stile of a fence.  They were all looking at me like "you shall not pass", so I pulled a fast one on them and jumped the fence a little further along, sneaking behind their group and carrying on my merry way.  They were none the wiser ;)

All up a rather slow 11.5km run taking just over an hour and ten minutes.  Pretty okay for a recovery run after a few days rest.  And where else can you so readily mingle with farm animals in the city?  Of course, there is the down side of having to run through the land mines, otherwise known as cow pats...

Side note: it is now pouring with rain, so I'm very glad I got my run in this morning when it was sunny and dry!

The vegan trial is going well so far.  This morning I enjoyed some vegan french toast with maple syrup and banana (I subbed almond milk for the water in the recipe).  It was so good, I went back for a third slice and the other half of the banana: 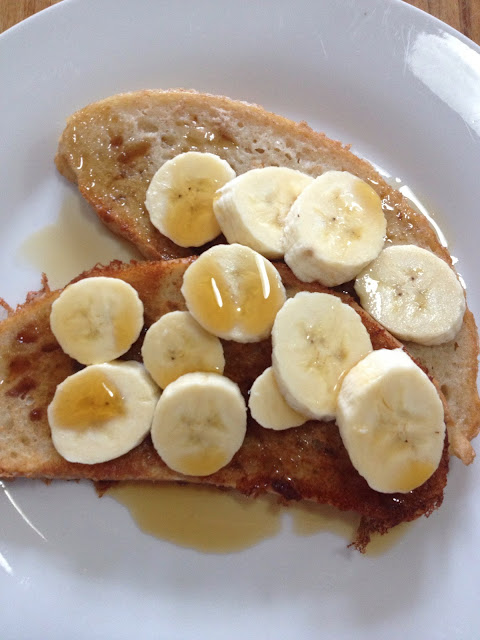 Tofu is rather marvellous, isn't it?  My favourite tofu recipes to date have been this one and this one.  It also blends really well into smoothies when you want a little extra protein.  The Japanese restaurant across the road from us has fabulous tofu dishes too.  I'm looking forward to trying some stir fries and other tofu dishes soon (tofu scramble, anyone?)

Tonight I'm making a vegan alfredo sauce to have with pasta (probably the Slim Pasta since Deane is anti-carbs), and Deane and the kids (or rather, the one that actually eats meat) will also be having grilled lamb.  I'm thinking a side of steamed kai-lan might be in order too, just to make it a totally confusing meal...

I've been having fun experimenting and comparing.  Last week I called in to Wise Cicada in Newmarket to pick up some Co Yo coconut milk yogurt, and while I was there I grabbed a few extra things they had on the shelves - a wee sample sachet of Artisana Cacao Bliss, some Artisana Coconut Butter, some vegan chocolate (totally unnecessary purchase, but its really good!) and a jar of kimchi for Deane.

If I were to buy a jar of the Cacao Bliss it would cost $30.  That's not a price tag I'm happy with.  The little sachet was a way of seeing what it was like without committing to a whole jar.  It also allowed me to compare the home made version to see which I liked better: 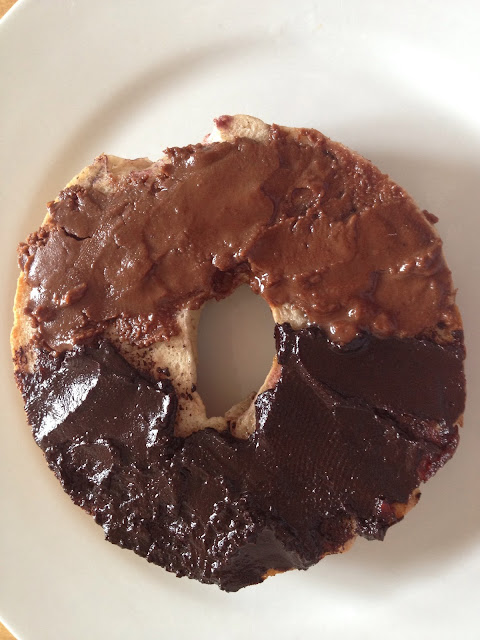 The top half is the real deal, the bottom half is home-made style.  In all honesty, I actually prefer the home made version.  Which is good for me, because it is waaaaaay cheaper, and ridiculously easy to make!

I also compared the coconut butter with a home made version.  Again, since we're on a roll here, I'll be honest.  The store-bought version is much smoother than the home made one, but they both taste the same.  Not surprising really, since it's just coconut that's been blended to smithereens.  The home made version is definitely more textured, but still tasty.  My food processor can't quite make it completely smooth.  ::starts dreaming of owning a Vitamix::    Word of warning: it is a b*tch to get out of the jar if its not warmed up a little first.  But then, so is the commercial version (or so I hear): 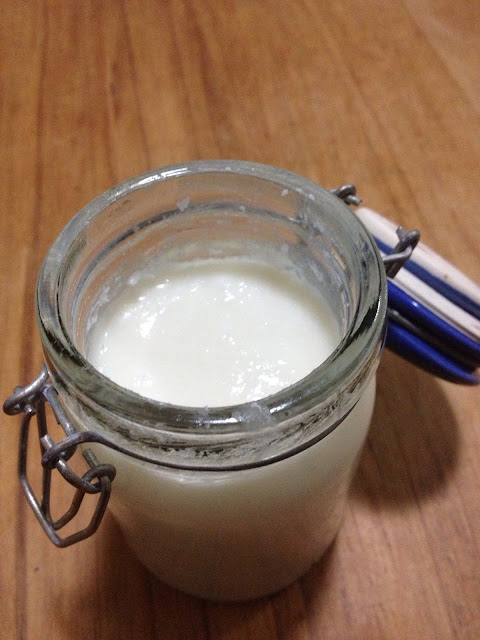 The Co Yo yogurt is really yummy, but (unsurprisingly) quite rich so I can only eat small amounts at a time.  With a $15 price tag that's a good thing!  I think next time I'll save myself some money and stick to soy yogurt.

Last week I bought a tub of Banana Bean Nice Cream.  Again, really yummy, but I don't think I'll buy it again.  So Good soy ice cream is equally as delicious and almost half the price.  I've found the nut ice creams we've been making recently are amazingly good (brazil nut ice cream recipe, cashew (or macadamia) ice cream recipe) so I'll most likely just keep making these and experimenting with flavours.  Although really, who needs that much ice cream anyway?!?  Amiright? ;)

I finally got around to making those girl scout cookie larabars too btw.  Yum!

Okay, enough about sweets.  I think it might be time to go snack on some vegetables ;)  More vegan recipe links next post, and by then I'll have finished a pair of socks - just a cuff and bind off to go!  Until next time people :)
Posted by kreachr at 14:29