Wednesday
I woke up feeling decidedly below-average health-wise, and it is rather icky and wet outside, so once again I will opt out of running today :(

The internet is awash with people raving about green monster smoothies.  My curiosity was piqued, and you may recall a little while back I braved an attempt at green monster oatmeal but wasn't overly impressed.  Well, not to dismiss something too quickly, I thought I'd give the real deal a go.  I used this recipe, substituting almond pulp for the nut butter and using chia seeds.  I sprinkled a little of the buckwheat granola on top too: 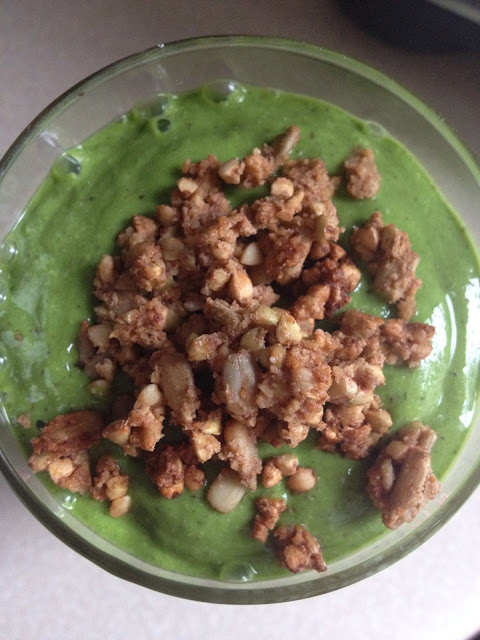 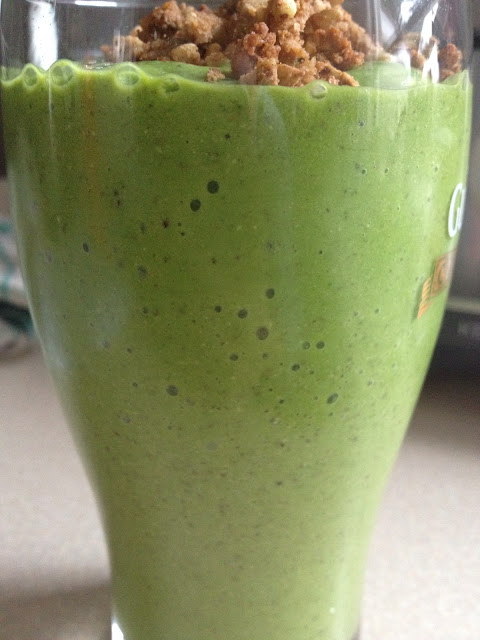 It was... fine.  I don't quite understand why everyone is raving about it so much though.  Sure, it's healthy. But really?  The flavour is mediocre.  I'd far rather have a blueberry or strawberry smoothie, or oatmeal, or pancakes or waffles.  Or if I'm going non-vegan, a spinach omelette with a side of bacon.  I gave it a good go, and I've decided it's just not for me.

I will continue to try new things though.  It's fun, and sometimes you find a really good something that you end up having on a regular basis.  I was rather intrigued by the idea of a grilled PB&J sandwich with banana and granola.  I'm sure I read about that somewhere...  I find it quite fascinating that there is a restaurant and shop dedicated to PB&J sandwiches and gourmet peanut butters.  And there's even a grilled PB&J sandwich shop!  Craziness.  I'd never cared about anything to do with peanut butter before because I didn't like peanut butter.  But as you know, my tastes have changed recently regarding this classic sandwich spread, and I rather enjoy the combination of peanut butter and jam.  Or peanut butter and banana, or apple, or chocolate.  Or even peanut butter as a component of a granola recipe.  So I was interested to see what the PB, jam, banana and granola all tasted like together :)  Behold - lunch!

You know what?  It was really good :)  Pic's Really Good crunchy peanut butter (with added salt - Deane insists), banana, buckwheat granola and my favourite plum jam.  A wee squirt of olive oil in the pan and voila!  PB&J&B&G grilled sandwich!  I could totally eat another one.  But I won't.  Everything in moderation (she says now, after days of eating copious amounts of baking).  I'd be keen to try some other combinations soon.  Gotta say, this one has me a little curious... not this month though ;)  Grilled sandwiches are like oatmeal.  I used to think you were pretty limited to what you could have - cheese, onion, tomato, ham, the usual suspects.  Oh no, my friends.  There are infinite grilled sandwich possibilities!  Fun times ahead ;)

I had a little happy amongst my general feeling of blahness.  X's class was having a shared lunch and had to bring something representative of their nationality.  The first thing I thought of was fish and chips (of course!  We are kiwis after all.  Or should I say 'fush and chups'?).  Rather than going to the local chippie and ordering a couple of scoops, (ew, greasy) I decided to bake some wedges and include a bowl of tomato sauce - Wattie's, naturally.  It's the kiwi classic.  (Wish I had one of those tomato-shaped sauce bottles.  Not sure what happened to the one we used to have).  And because we live across the road from school, those wedges were delivered hot, straight out of the oven, just before lunch was about to start.   Sometimes being a stay-at-home mum has its advantages :)

I decided it was a sandwich-for-dinner kind of day, for me at least.  The boys had other stuff and Deane was out.  My dinner, although at face value sounds pretty lame (I mean, come on, who eats sandwiches for dinner?), it was in fact rather awesome.  Using this 'recipe', although I'm not sure you can call it that, I made some edamame hummus and used some of my spinach tomato pesto with avocado and tomato slices, and a sprinkling of salt and pepper: 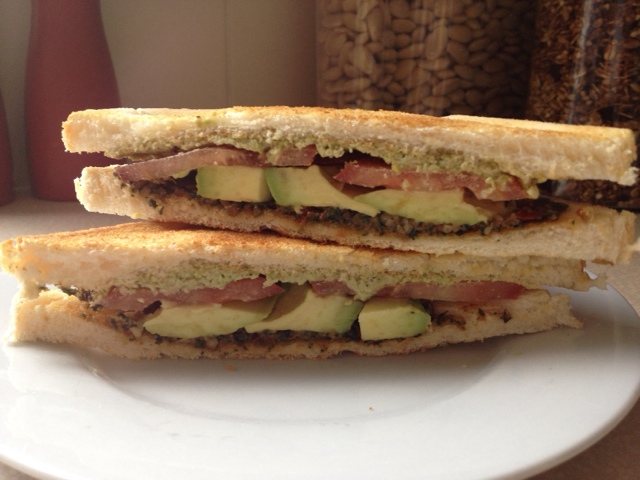 It was surprisingly tasty.  The secret, I think, is toasting the bread before constructing the sandwich.  I had another half-sandwich with fresh bread (because it was just that yummy) and it tasted good, but it was lacking that special something the first sandwich had.  I'd quite happily have this sandwich again.  Not in the near future though, I've run out of avocado :(

Thursday
Feeling a lot better today, thankfully.  I don't do sick very well.  Especially with the knowledge that I don't get to call in sick and stay home from work!  Oddly, I feel like I'm missing out on enjoying the experience because I don't get to stay in bed and watch movies while somebody brings me cups of tea.  Clearly I have a totally unrealistic idea of what it's actually like - I doubt many people get to do this on their sick days.  Perhaps its come about because that's what Deane gets when he's sick (although I bring him coffee and meals instead of tea), and because I've had several child-free people in my twitter feed recently talking about spending their sick days relaxing on the couch and watching Harry Potter while their significant other makes them tea and feeds them chocolate and wine.  Sigh.  I wanted to spend the day on the couch watching Harry Potter and drinking tea  ::pout pout pout::  Where's my sympathy party?!?  Shower me with love and attention, somebody!  No?  Okay, moving on...

I spent the morning on that rather challenging subject of statistics - I'm now working on inference (ugh), then I had another grilled PB&J sandwich for lunch - this time with apple slices and sunflower seeds:

Yum!!!  Sorry the second photo is blurry, I was in so much of a hurry to eat it I couldn't wait for the camera to focus ;)  Then Deane and I headed to Cornwall Park for that run, finally.  I ended up cutting mine short and only running 7km instead of two full laps - we had to get back home by 2pm.  I cooked the family roast chicken and vegetables, and I made myself broccoli and soba noodles: 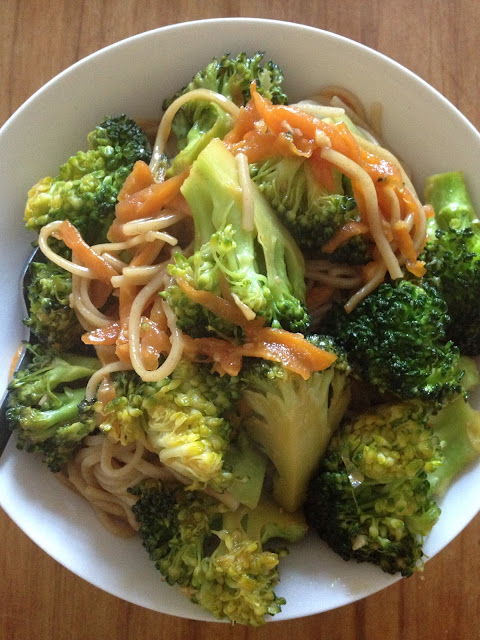 So much broccoli!  So good!  This would make an excellent quick and healthy lunch, I'll have to remember it.  I carried on with stats once the boys had gone to bed, finishing another chapter before calling it for the night.  Two more chapters to go - inference for proportions, and analysis of two-way tables.  With any luck, I can knock them out tomorrow (or maybe finish them over the weekend - let's not be too optimistic) so I can not stress over school holidays about it, and have some prior knowledge (such as it is) before the workshop next Tuesday.  Oh, I'm so looking forward to that workshop.  It seems to make much more sense when somebody is explaining it to you, rather than reading something out of a book and trying to make sense of it yourself!  My next stats assignment is due on the 15th October, right after school holidays.  Hmm, guess I'll be doing some study during the holidays after all...  There's two more stats assignments due after that, on the 14th and 28th October.  Yay :/  The last assignment for my other paper isn't due until 30th October.  Wonder what paper I'll do over summer...?

Friday
Last day of school today!  X is having a pyjama day.  I think he's pretty happy about that.  The wedges for the shared lunch the other day were a hit, they all disappeared.  I think the only other thing that got completely devoured was the bucket of KFC chicken.  Ew.  He was also very happy with his lunch yesterday - he'd been requesting kebabs for lunch for a little while, and I finally got around to marinating some steak overnight on Wednesday to quickly fry in the morning, ready to pop into his lunch box.  Hurray for half-size bamboo skewers!  Not sure it's something I'd want to do all the time though.  Could you imagine, steak for lunch every day?  As if they're not spoiled enough as it is ;)

Breakfast this morning was one of those giant cheesy spinach bagels (one left now), with soy cream cheese and sunflower seeds on one half, and marmite and walnuts on the other half.  Omnomnom!  They really are quite a mission to eat though - will definitely have to make smaller ones next time.

More statistics today.  Trying to finish the last two modules before school holidays start... no time for running... no time for shopping (need a birthday present for a kid's party on Sunday)...

Lunch was a spinach salad with a random assortment of toppings and a lemon dressing.  Quick and easy.  Back to statistics...

Kid #2 arrives home from school.  What?  3 o'clock already?  Parent of kid #1's friend calls and asks if kid #1 can go play at friend's house.  Yes, yes, that's fine.  More statistics... brain starting to fade...  Phone rings again - it's the doctor's saying kid #1 missed his after school appointment.  Ah, dammit!  And I even wrote it on the calendar after making the appointment yesterday :(  Hopeless.  Brain about to explode, despite what are clearly rather large ventilation holes.  I mean, how else can simple things like an important doctor's appointment made yesterday slip through?  Can't figure out how to calculate the last part of the last problem in chapter 8.  So close to finishing it, and only one chapter to go.  Why can't I figure it out?!?  Arrrrgghh!  I give up!!!  The people that came up with all these different calculations are clearly well-versed in the art of brain-torture.  Ugh.

At least Deane is bringing pizza home for himself and the boys.  I'll be noshing on a vege burger (yum!).  No challenging cooking duties this evening!  I'm claiming the TV for Harry Potter too, dammit.  I still feel duped from the other day.  And I'm totally going to be inhaling some of this ice cream while I watch it.  Just because.

Sigh... back to that statistics I guess.  The problem isn't going to solve itself, and I can't move on until I've got it.  Maybe I'll go for a nice long run tomorrow...
Posted by kreachr at 16:37