This weekend was better than last weekend

You know why?  Because I ran my first official half marathon race.  And it was awesome.  On Thursday evening we trekked out to Albany mall to call in to Shoe Clinic so I could register for the race and pick up my timing chip and race number: 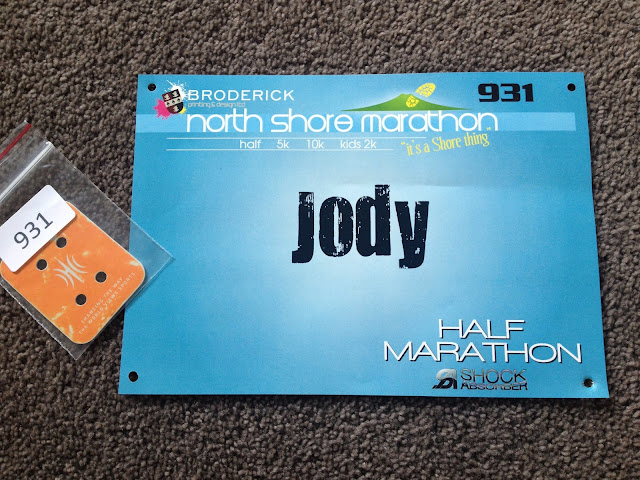 This is the first time I've come across a race bib with the name instead of just a number.  I had visions of people lined up along the side of the race route cheering people by name.  Which I guess would be nice, instead of just generic cheering (which is ALWAYS appreciated, just so you know).  Having never had any family or friends attend any of my races to cheer me on, I thought this might be kinda cool.  The rest of my week carried on as normal - I did some study, ran a short 6.4km on Friday, and I had a relatively slow Saturday so I could chill out and relax.

Sunday morning I got up at 5.45am and had some porridge for breakfast - chocolate PB2 with some vanilla and pear: 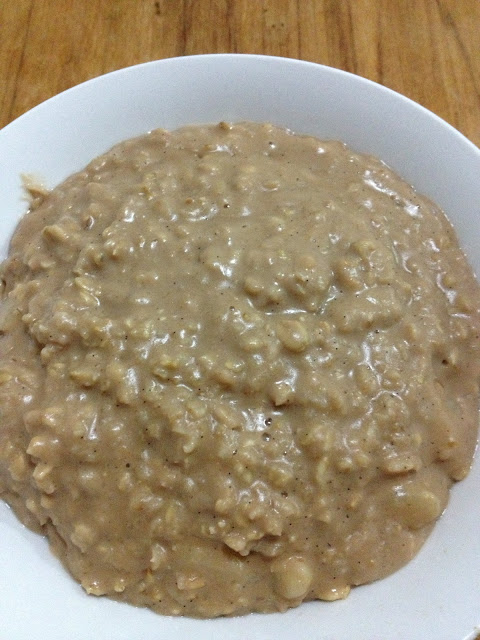 Looks horribly unexciting doesn't it?  Tastes fabulous though - this is the second time I've had it.  Yum!  I think the combination of the chocolate peanut butter and vanilla really works, and the pear is squishy and sweet.  I confirmed that I knew how to get to the race and where I was able to park.  Takapuna Primary had parking for $5, which would save me trying to find a park on a random street - something I'm terrible at.  This sounded like an excellent option.  I visited the bathroom a few dozen times (silly nerves), cooked Deane his Father's Day breakfast in bed, then headed out the door at 7.30am.  My race was due to start at 8.17am and we were supposed to be at the start line 10 minutes beforehand for race briefing.  I find it kind of silly that they run through the full race route for you street by street - who is going to remember all of that?!?  You just follow the road cones, signs, and the people in front of you :)  The men's half marathon started first, then the women about ten minutes later.  I snapped a few pics of the starting area while I was waiting.  It was a rather lovely morning: 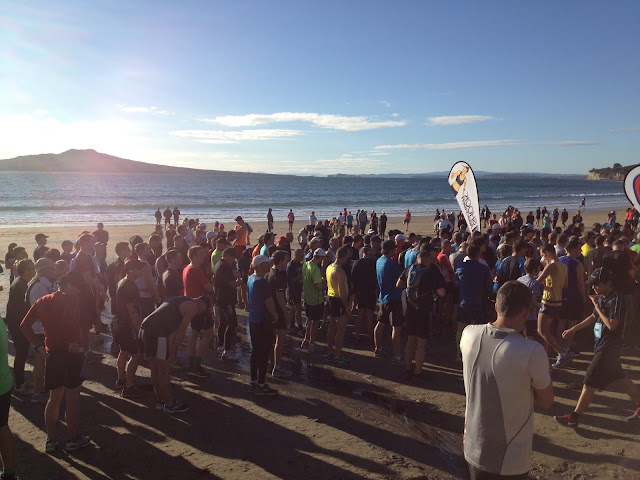 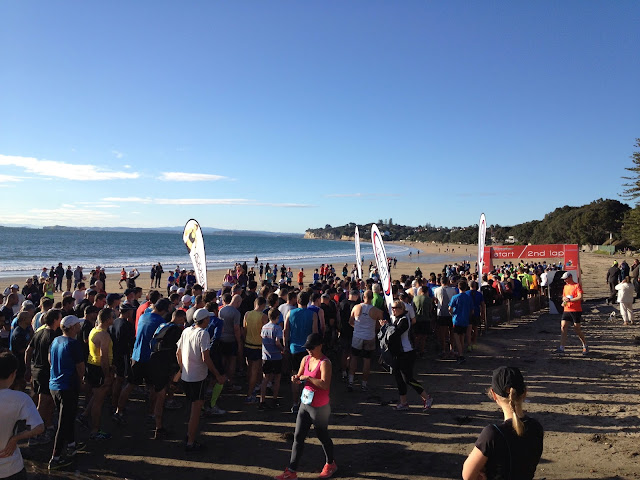 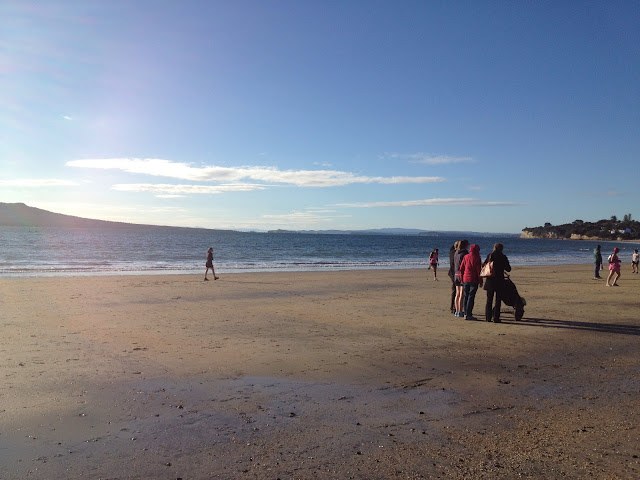 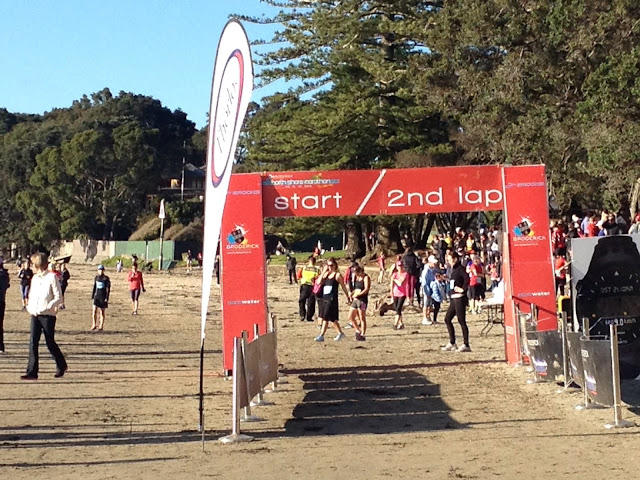 At 8.17am, the women started their half marathon race.  The first kilometre was run on the beach.  Thankfully it was fairly hard-packed sand so I was okay with that.  Then we headed up a little hill through a short patch of soft sand and onto the road.  I thought that was it for beach running, but I was wrong.  We dropped back down onto the beach again a little later, and it was soft sand!  Ugh!  I hate running on soft sand!  There was less than a kilometre of that, although it felt like a lot more.  The majority of the rest of the race was on the footpaths and roads, but there was a bit of trail running in the Hauraki Gulf Maritime Park.  Some nasty, steep uphills, but oh so beautiful views.  I was almost tempted to stop and snap a few pictures!  As a consolation prize, here's a link to an image search, and a couple of pics I snagged off the www: 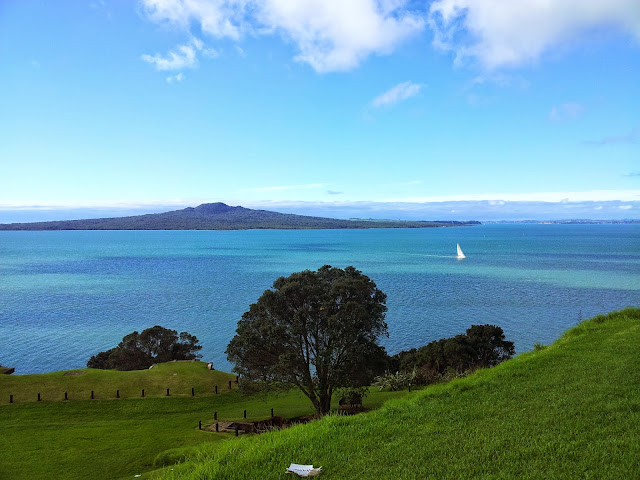 We later ran through Milford, past one of my favourite yarn stores, Crafty Knitwits.  Sadly, there was no time to call in and I didn't have my wallet handy...

The only time anyone used my name during the race was at one of the later water stations, around the 14km mark where they were handing out water and gummy lollies.  They called out and asked if I wanted water or an energy boost.  I snagged a cup of water, then went to grab a lolly but missed.  I stopped, back-tracked, and grabbed one before heading off again.  No way I was missing out on a lolly! ;)  Luckily there was nobody behind me to bump into me because what I did is really bad race etiquette.  I did have some dextrose tabs in my shorts pocket, but didn't end up having any.  That gummy lolly was enough to keep me going for the rest of the race.  I cheered on a few of the slower moving men along the way during the race - older gents who were finding it a bit of a slog.  They're rather inspiring I think.  I hope to be able to still run a half at their age!

At the very end of the race, the finish chute was up a hill from the beach, as you can see from the photo here (snagged off the North Shore Marathon Facebook photo album page):

I drove straight home and had a nice hot cup of tea and some chocolate, then enjoyed a lovely hot shower before having an early lunch.  That afternoon we took the kids to the pool for a swim, and had takeaways for dinner.  I had a falafel kebab, something I haven't had in a long time.  It was really, really good!  Then I had a black bean brownie (these things are amazingly good!) and some banana bean nice cream for dessert.  Because why not? ;)

Much to Deane's consternation, I have decided to make September a vegan trial month.  Not because I have anything against eating meat or animal products, or because of my concern for the effects that our population has on the environment by consuming large quantities of animal products.  This is purely out of curiosity.  I'm going to keep a track of what I'm eating and how I'm feeling so I can see if there are any obvious health benefits (or conversely, negative effects).  Every person is different, and not all diets are suited to everyone.  This is going to be a bit of an experiment, and I'm actually really looking forward to it.  There are so many different things to try, some of which I've already thoroughly enjoyed in the last couple of months as part of our normal diet.  I'm well aware of the need to vary the diet and make sure I'm getting enough of the essential vitamins and minerals, protein, etc etc.  And to be honest, I don't think I could actually live the rest of my life without meat, eggs and dairy.  I'm just really curious to see how it goes.  And of course, I'll be sharing with you all my recipe sources.  The successes and the failures ;)  You may well be aware of my current favourite recipe source - Chocolate Covered Katie.  I have not been disappointed with one of her recipes yet - she is awesome.  But one cannot survive solely on desserts, sadly.  As delicious as we found the ice cream, and this brazil nut ice cream (Deane made some brazil nut milk was was surprisingly good) I think I'm going to need to branch out a little more ;)

For example, tonight's dinner will include Italian butter beans.  Later this week I'll be recreating that delicious pumpkin and silver beet lasagne I made the other week, but my half will have lentil ragu and nutritional yeast (or perhaps this 'cheese sauce') instead of mince and cheese.  Oh, so much fun!!

I hope y'all have a good week.  I have more study to do, some knitting to be getting on with, and of course housework and laundry.  Fun times ;)
Posted by kreachr at 09:56