Too much of a good thing = not so good

Thursday
You know those situations where you know what you're doing has a high possibility of coming back to bite you in the ass but you keep going anyway, and then when it inevitably does turn on you, you're peeved with yourself for being such an idiot?  Yeah...

Here is the offending item: 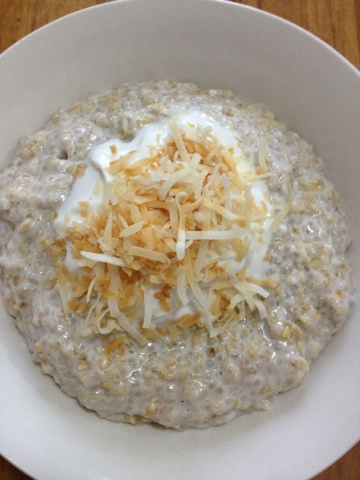 The deliciousness that is coconut cream pie oatmeal, complete with coconut yogurt.  So good and yet so, so bad.  I thought while making it that it was likely a bad idea.  I pondered this a little more while eating it and enjoying the beautifully rich layers of coconut flavour.  Then about ten minutes later I was kicking myself when the nausea set in.  Thankfully that was all I had to endure for the next hour or so - my IBS was being kind.  For the foreseeable future however, I will be steering clear of coconut milk-based recipes :(  Damn you coconut milk, why must you taste so good?

Luckily, there are many other delicious vegan recipes out there that do not contain any form of coconut, although I'm pretty sure I'd be safe with dried coconut and small amounts of milk, cream or oil.  Then there's those delicious coconut-based spreads I made earlier this week. I'm sure they'll be fine since you only have small amounts at a time.

For lunch I had a vegan omelette.  I would share pictures but mine looked a little like a train wreck.  I didn't quite manage to flip it in half properly - clearly I lack the required finesse.  But I can tell you it was very tasty :)  I plan on experimenting a little more with it and practicing the flipping part.  Otherwise there's always tofu scramble.

For dinner - roasted Buddha bowl, and roasted carrot and parsnip: 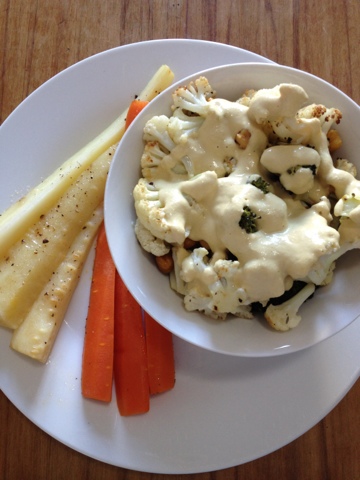 Omnomnom!!  I can understand how the recipe creator managed to eat an entire batch in one sitting, it was really good!  I'm a fan of roasted broccoli and cauliflower already, but with the addition of those roasted chickpeas, oh my.  And the dressing?  Freakin' fabulous!

I had a little fun with the chickpeas while preparing the meal.  As I was drying them, some of the skins were peeling away so I decided to continue with it - the chickpeas would dry better anyway.  This is what I was left with: 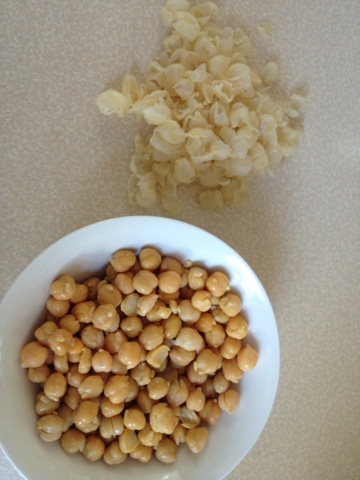 Naked chickpeas and empty skins.  They look a little creepy to me.  It brought to mind sci-fi horror flicks, like where aliens kill you and steal your skin then later discard it when it starts to go bad.  Yeah, I probably have a little too much time on my hands...

Deane and the kids had beef bourguignon as well.  It smelled delicious and looked fantastic so I'm sure I did a pretty good job of that too.  (Later confirmed to be awesome by Deane, yay!).  I had absolutely no problems leaving it for the boys though.

Other points to note so far in the 'vegan trials':

* I'm happiest with my home made almond milk when it's made with one cup of blanched almonds and 3 1/2 to 4 cups of filtered water with nothing else added.  I've worked out that it costs approximately $3.33 per litre, so if unsweetened almond milk or soy milk is on special at the supermarket I'll buy a bunch (because I prefer the flavour if drinking it straight - the home version is a little too 'almondy'), and use home made the rest of the time.

* If you're planning on making nut milk on a regular basis, it's worth investing in one or two nut milk bags.  I've been using my makeshift bag I created out of a spare Wallace Cotton carry bag, but it's already showing signs of wear.  I've ordered a nut milk bag and can only hope my other one holds out until it arrives (eta: late September/early October - coming from the US).  I have muslin as a back-up just in case.

* I have yet to find a recipe I'm happy with for using up the almond pulp from making milk.  So far I've tried these crackers (which were actually not bad), these crackers (meh), and I tried making some cookies using the pulp instead of dry almond meal and although they tasted okay, they were too crumbly and moist despite baking them for twice as long as the recipe recommended.  No surprise really.  I guess I could just dry the pulp out in the oven...

* Soy cream cheese isn't nearly as horrible as it sounds. In fact, it's pretty good :)

* That vegan cashew alfredo sauce I made for dinner last night was delicious!  I was a little concerned at the thinness of it when I poured it out of the blender and went back to check I'd actually read the recipe correctly regarding the amount of water (I had).  It thickened up nicely once it started simmering, and coated the pasta well.  The steamed kai-lan side went with it fabulously, and Deane and the boys had marinated lamb kebabs (sans veges).  It actually worked pretty well.  I plan to have the leftover alfredo sauce for dinner later this week while everyone else is having sausages.

Friday
It would appear that idiocy reigns supreme in the sleep-deprived kreachr brain.  I didn't get to sleep until some time around 1 am (thanks Deane), and some horrible person (probably in some random foreign country running a scam by the looks of the number) called at around 4.30am.  I didn't manage to get back to sleep before T wandered in at 6.30am and crawled into bed.  3 1/2 hours sleep is about half of what I need in order to not be a cranky-pants.  This morning I stupidly decided to use up the last of the coconut yogurt at breakfast, serving it with granola and a sliced banana.  Nausea once again set in, and took the better part of an hour to subside.  Will I ever learn?!?  At least now the yogurt is all gone so there's no chance of it happening again any time soon...

I ended up having the alfredo sauce for lunch with some slim pasta - yum!  I had fun with dinner, using a few different recipes to create one seriously awesome dish:

Vegan Layered Vegetable Bake
Preheat oven to 180°C.  Stab a few holes in the top of a buttercup squash (or pumpkin, whichever you prefer to call it), and roast it whole for one hour.  Cut off the top, slice in half, and set aside to cool.  While this is roasting, take a small bunch of silver beet and rinse the leaves, then trim the stalks off.  Set these aside as well.  Prepare other components as follows:

Heat the oil on medium heat and saute onion, carrot and celery for about five minutes until beginning to soften and colour.  Add garlic and mushrooms and cook a further two minutes, stirring frequently.  Add lentils, tomatoes, tomato puree, oregano and chilli flakes.  Stir until well combined and bring to the boil, then cover and reduce heat to low.  Simmer for about 40 minutes until lentils are cooked, stirring occasionally.  You may need to add a little water towards the end of cooking if the sauce starts to get too dry.  I added 1/4 c about 30 minutes in.  Season with salt and pepper, add the chopped fresh basil if using, stir well then set aside.

Add water, cauliflower, garlic powder, minced garlic, paprika, mustard and turmeric to a pot and set on med-high heat.  Once boiling, cover and reduce heat to low.  Please note that this is a very important step - I forgot to turn the heat down and ended up boiling the pot dry!  I had to start again :/  Luckily I have the world's largest, seemingly never-ending cauliflower in the fridge.  No problems there ;)  Simmer for about 15 minutes until cauliflower is fall-apart soft.  Pour entire contents of pot into blender (you may wish to allow it to cool slightly before doing this), and add the remaining ingredients (nutritional yeast, salt, cornflour and lemon juice).  Blend for a good minute or so until smooth.  Return to pot and heat gently.  Simmer for a couple of minutes until thickened.

Returning to that roasted pumpkin, scoop out and discard all the seeds and stringy bits, then scoop out the flesh of the pumpkin into a bowl and mash it (or if you prefer, whizz it in your food processor until smooth).  Once all the components are ready, grab an 8"x11" (20cmx28cm) lasagne dish and layer as follows:

Pumpkin mash, 1/2 lentil ragu, silver beet, 1/2 lentil ragu, 'cheese' sauce.  I added a little soy cheese to the top of half of it, but seriously people, that stuff does not take kindly to being grated!  It's an optional extra.  Deane is not a fan (at all.  He says it makes him gag) which is why I only put it on half.  Plus, you know, the whole grating thing... 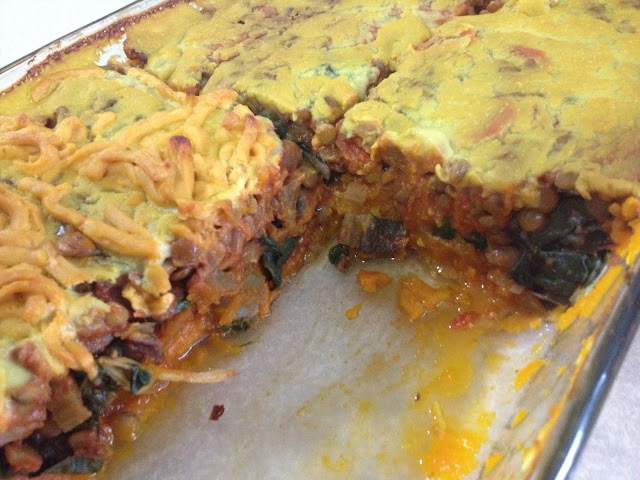 Not the most attractive thing in the world, is it?  And of course, I am not a photographer by any stretch of the imagination.  But it was really quite delicious!  And there's plenty of leftovers, yay!

I had enough room left for the last of the Banana Bean Nice Cream for dessert (the kids insist everyone has a 'pudding stomach' which is totally separate from your normal stomach.  There's always room for pudding ;P) - no ill effects, thankfully - before heading off to bed at 9pm to catch up on some of that missed sleep.

Saturday
Woke up at 6am, then headed out nice and early for ParkRun in Cornwall Park (no stats available yet).  After arriving home again I had gluten free cinnamon sugar waffles with banana and maple syrup for breakfast.  Delish!  My waffles got a little stuck to the waffle iron - first time that's ever happened! - so they looked a little mangled.  But it all tastes the same going down ;)  Later today I'm going to make some skinny figgy bars (aka vegan homemade fig newtons.  Nom).  Then for lunch or dinner I think I'm going to give this black bean and potato nacho plate a go.  Or maybe this layered raw taco salad, I haven't decided yet.  They both look ridiculously good though, don't they?

I am having so much fun with this experiment!!  Not missing animal products in the slightest :)  Although I have to admit the bacon I cooked the boys for breakfast this morning smelled amazing...

This post is now ridiculously long so it's time to cut and run.  More recipe links and updates on the vegan trials next post!  By the way those socks are done,  I just haven't taken photos yet :)  See you again soon!
Posted by kreachr at 11:08