Vegan food is the shizzle

Let me start off by saying that mac and shews I had for dinner on Sunday was AMAZEBALLS.  I made a half batch, and ate half of that.  A whole 675 calories worth!  Soooooo goooooood!  I've had to sequester the remainder of it in the freezer in two separate containers to prevent me from just devouring it.  I didn't end up having anything else with it.  It didn't need anything else with it.  Now you see, the benefit of long runs is that you can eat more.  Gotta love that, right?  So even though my dinner was a rather whopping calorie hit (in a good way), I still had room to wiggle, so I made a single serve chocolate cake for dessert.  Then I was completely stuffed, and felt like a walking lead balloon.  But it was worth it ;)

Monday
Breakfast was simple - granola with soy yogurt, almond milk and a diced pear.  Sounds boring, but it was pretty good.  I love home made granola, especially this batch with dried peach, mango and blueberries!  And seriously, after last night?  I really didn't need to go crazy with breakfast.

Lunch was decided that morning, when Oh She Glows (aka: Angela) posted her chickpea pancake recipe.  I didn't have any capsicum, so I diced up a large button mushroom and a celery stalk in its place, and served it up with some of our favourite salsa (apparently the only thing in the world with coriander in it that I can actually eat), 1/4 avocado, and some vegan mayo.  What can I say, except I really wish I hadn't promised Deane half...?  It was really, really good.  I swear these people are freakin' geniuses!  The recipes they create are just awesome.  I am absolutely loving this vegan trial month! 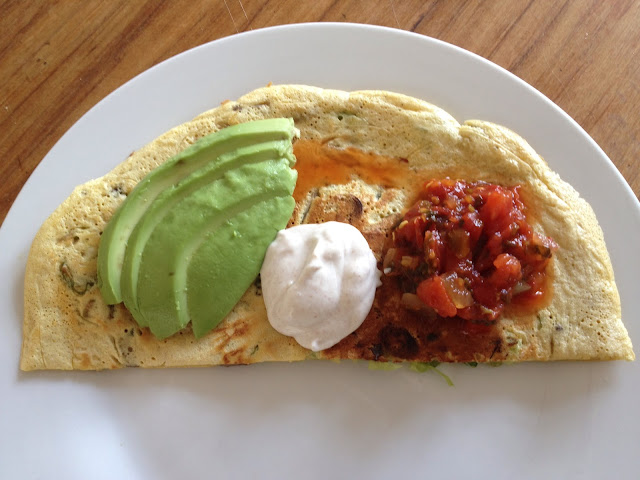 See?  I cut the pancake in half because I'm good at sharing :) 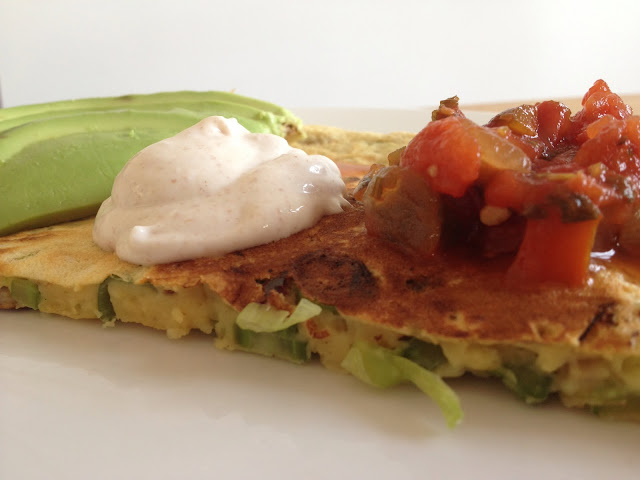 It looked really pretty for the pictures, but I totally smushed up all the toppings and spread them all over the pancake before eating it.  I'm not a complete weirdo.  (btw, if you're one of those people that doesn't like their different foods touching, no offense.  Everybody has their 'thing(s)'.  I myself have many, but we won't get into that right now.  What I'm trying to say here is that we're all a little weird).

I felt like I couldn't really top that for the day, so we had home made potato wedges (with some vegan mayo for dipping) with braised cabbage for dinner, and Deane had a big juicy eye fillet steak.  Not content with the 'normal' braised cabbage however, I decided to recreate a recipe that was passed on to me by a friend when we lived in Wellington.  I can't recall the recipe exactly, so copied it to the best of my knowledge, which I will share here.  I've named it after the lovely Romanian lady that shared it with me:

Slice cabbage, discarding any large chunky stems.  Heat the oil over a medium heat, then add the garlic and cabbage, and sauté until the cabbage starts to soften.  Add the can of tomatoes (or equivalent amount of tomato puree) and season with salt and pepper (I used about 1/4 tsp salt and 1/8 tsp pepper).  Reduce heat to low and simmer uncovered for about 30 minutes, stirring occasionally.  Just before serving, sprinkle in the citric acid and stir through.  Taste, and adjust seasonings if required. 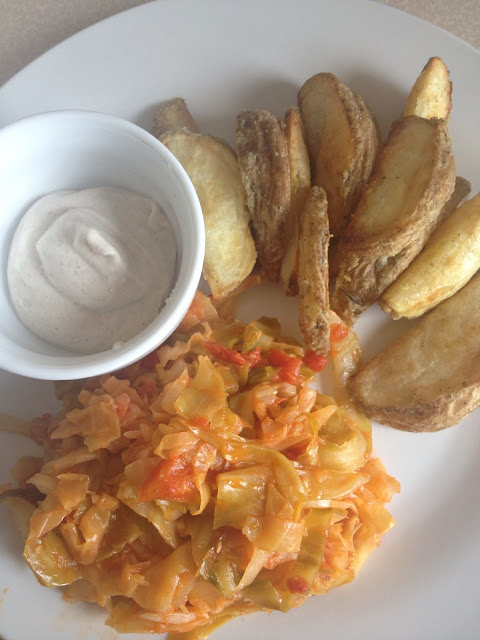 I made a rhubarb and pear crumble for pudding because the rhubarb was looking a little sad and needed to be used up.  It was fine, but the crumble wasn't quite right so I'll work on that one and if I get it right I might share the recipe a little later.  I usually just throw together a random assortment of ingredients for the crumble mix depending on what I have in the cupboard.  This time around I tried it with some almond pulp.  I'm not sure, but I think that may have been what was 'wrong' with it...

I did end up making the kids that other chocolate cake too.  Same recipe, just without the extra decorations on the top.  Here's a pic that shows just how tall the cake is: 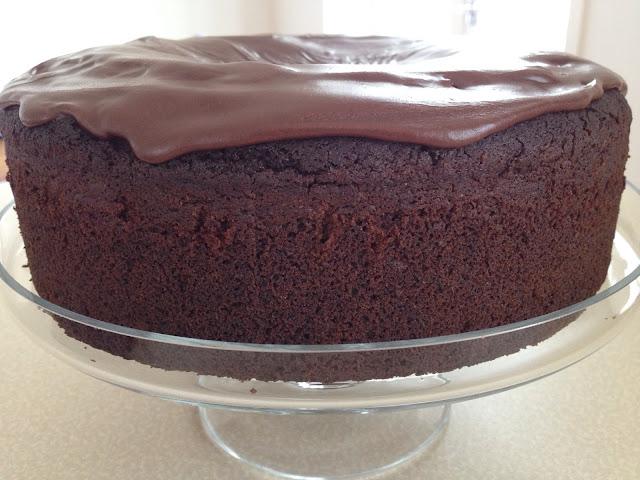 The cake plate lid barely fits!  Crazy, huh?  With neither Deane or myself eating any of this, and with more than enough there for the kids to have a slice for lunch every day this week, I gave 1/4 of it to some friends along with some biscotti, chocolate syrup and orange curd.  And the leftover rhubarb and pear crumble.  I think that's why they visit so often - they usually leave with something I've baked ;)  Well, somebody's gotta eat it I guess.  Or I could just bake less... nah... :)

The photos from last weekend's race have been uploaded.  It appears that if you smile, wave, and make goofy faces the photographers take a lot more pictures of you!  There are 30 photos of me this time around (compared to the usual 3-6) and my eyes are closed in at least four of them :)  I have the cheesiest grin on my face, and am horrified to note that in the last eight photos my thighs appear to be the same size as the man's running next to me!!  Wow, I knew I had stocky legs, but jeez...  As dorky as the grin is though, I think I like photo #6 with the double thumbs up (before I blinked).  So anyway peeps, peruse the pics and have a good giggle at them.  I did ;)

Tuesday
Breakfast was another oatmeal trial - this time, it was chocolate strawberry oatmeal.  It has half a mashed banana in it, and so the other half didn't go to waste I sliced it up and added it to the top along with some chopped up strawberry.  I also added chunks of strawberry into the porridge during the last minute or so of cooking.  I'm a big fan of strawberries ;) 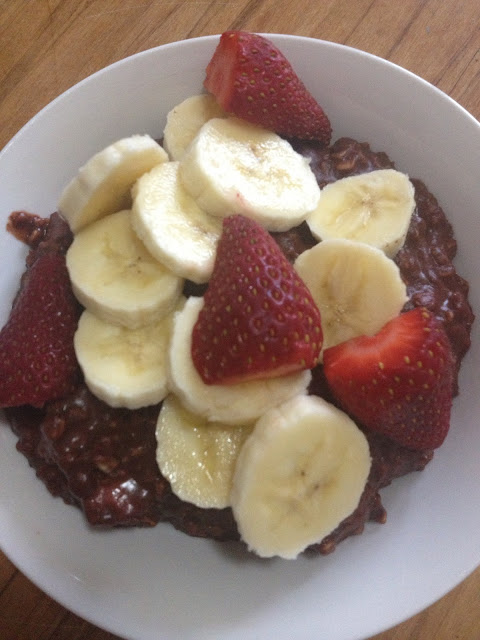 My weekend order from Nuts Online arrived before the kids left for school:

3kg blanched almonds (we go through a lot of almond milk in a month, what can I say?), 1kg cashews (because they are awesome for everything), 700g walnuts (mmm, walnut taco meat...), 1kg black beans, 500g chickpeas, 1kg dates, 1kg sunflower seeds, 300g pumpkin seeds, a jar of rice syrup, more nutritional yeast, vegan chocolate chips (because I love baking, especially baking that involves chocolate) and more rolled oats.  Although it appears I should've got the quick cooking rolled oats.  I guess a quick blat in the food processor will turn them into quick cooking oats though, right?  Problem solved ;)

My only problem now is where to put it all?  I don't have very big cupboards!  My dream kitchen would be huge, with a giant walk-in pantry, bench space for Africa, and allllll the kitchen gadgets - cake mixer, coffee machine, Vitamix, the food processor from 'nam, a big oven, baking trays and dishes in every size imaginable, and of course the space to store it all... a girl can dream...  You know, it's funny.  Deane used to be the 'cook' in the relationship.  He would be in charge of everything from poached eggs to roasts, simply because I found them too challenging.  Baking with yeast scared the crap out of me, and gelatin was something I just couldn't get my head around.  Gravy?  I didn't do gravy unless it came out of a packet and you just added hot water.  I could make a mean cheese sauce though.  Over time, as our roles have changed with the addition of children and his climb up the corporate ladder (haha), I've come to really love spending more time in the kitchen, and reveled in the challenges of conquering learning how to cook with different ingredients.  Its a fun ride, and I'm not getting off it any time soon.

Especially when you get to try things like the broccoli and lentil power plate I made for lunch.  Where to start?  Savoury, sweet, sour, salty, a tiny bit spicy, all kinds of delicious, creamy, refreshing... this plate had it all! 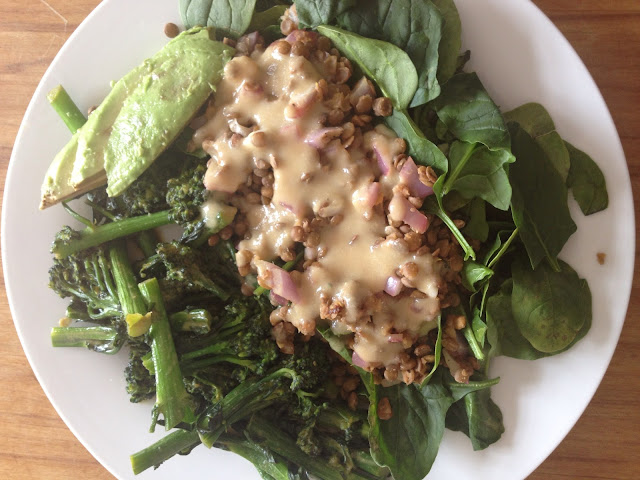 I used broccolini instead of normal broccoli because that's what we had in the fridge.  I omitted the orange slices a) because we didn't have any, and b) the plate didn't need it in my opinion.  I also used red onion instead of white.  But oh my, that was a very good lunch!  And one my childhood self would never in a million years have even considered eating.  I mean, just look at all that green food!!  ::childhood self shudders in horror::

Roll on, dinner!  I made broccoli curry udon, but used pak choy instead since we had broccolini for lunch. It was pretty good, but I made a bit of a mess dishing it up so I'm sparing you the picture ;)

And I've had this dessert in my mind for days, so I finally bit the bullet and made it this evening.  I knew it was going to be dangerous, and I was right to be worried. It is insanely good.  Sadly, Deane won't touch it because its full of sugars and flour, and the kids won't eat it because it has dates and pecans.  Our friends won't eat it because I loaded them up with goodies yesterday.  Halp!!!  What am I going to do with it??  ::sigh::  Guess I'll be going for a run first thing tomorrow...  Maybe I'll have some for breakfast when I get back... (I'm only sort of kidding).  Just a head's up people - if you leave this thing on the bench for an hour or two so the toffee sauce has time to soak into the cake, there will be no telling whether you'll be able to stop yourself from eating it ALL.  You have been warned.  I highly recommend you make sure there are plenty of people around to help you eat it so you don't.  That's all I'm going to say about that.

I finally got my A into G and started my assignment.  Yes yes, about time.  It's due next week.  But what really got me motivated was the realisation that school holidays are less than two weeks away and I need to get ahead in stats before I've got the boys nagging at me for the computer.  Wow, that term just flew by!

Lastly, we received another food delivery today in the form of this week's Foodbox.  We already had a bunch of fruit since I'd sent Deane to get extra apples and bananas over the weekend (because you always need apples and bananas on hand in this house, trust me).  After adding the fruit from the Foodbox, this is what my fruit bowl looks like: 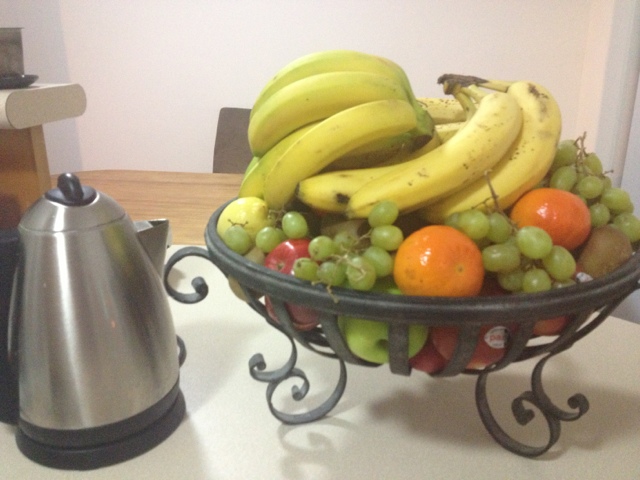 Crazy!  But oh, I do so love fresh fruit.  I'm certainly having no problems at all getting my daily dose of fibre ;)  Iron, on the other hand, is proving a little more of a challenge than I expected...

Right, I think that's more than enough food talk for today.  It's about time for some knitting and a nice hot cup of tea.  Tomorrow I think I'll take it easy in the kitchen and stick to leftovers - if I keep finding new things to cook at the rate I've been going the last couple of weeks, I'm in danger of blowing myself up to the size of a house!  There won't be enough time in the day to run it all off ;)

Have a fabulous week, and enjoy the warmer weather!
Posted by kreachr at 21:12