Saturday
I made those skinny figgy bars - they are awesome.  Can't stop eating them!  I also found a recipe I like that uses up the almond pulp from making almond milk - almond pulp bars.  I'm keeping them in the freezer so they should last for a while.  Having said that, Deane's eating them too so they probably won't last that long...

I ended up going with the raw taco salad for dinner.  Deane had some of the salad and a scotch fillet steak, and the boys had wedges.  I am so very glad I decided to try that salad because it was AMAZEBALLS.  What I found quite amusing is that Deane turned his nose up at the walnut taco meat when he first saw it, but when I constructed the salad and told him to try it, he actually really enjoyed it.  I will most definitely be making this again!! 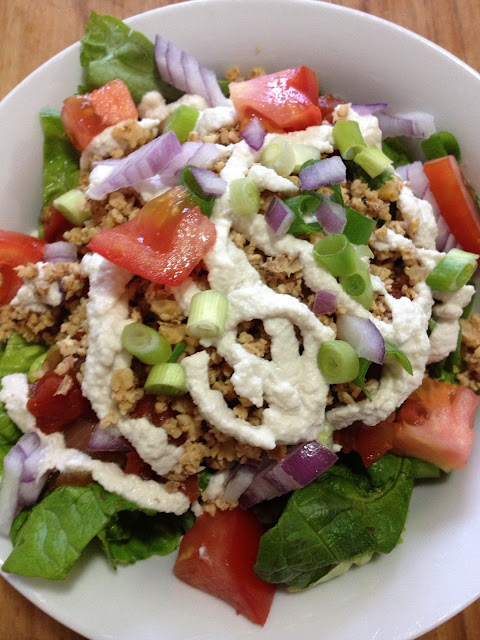 Doesn't it look beautiful?  So yummy!!  I did have some endurance crackers with it as well, but didn't take any pics of those.  I used white chia seeds to make mine so they look a little anaemic, but they're still tasty.

Got my stats for the ParkRun too - I was '11th lady' this time (breaking my 4th lady streak ;P) and 46th out of 98 runners with a time of 25:27.  I thought this was pretty slow and actually felt a little sluggish at the time, but it turns out my time was a 32 second improvement on my ParkRun best time!  Well, there you go...

Sunday
I made strawberry baked oatmeal for X and myself for breakfast, with chocolate strawberry sauce: 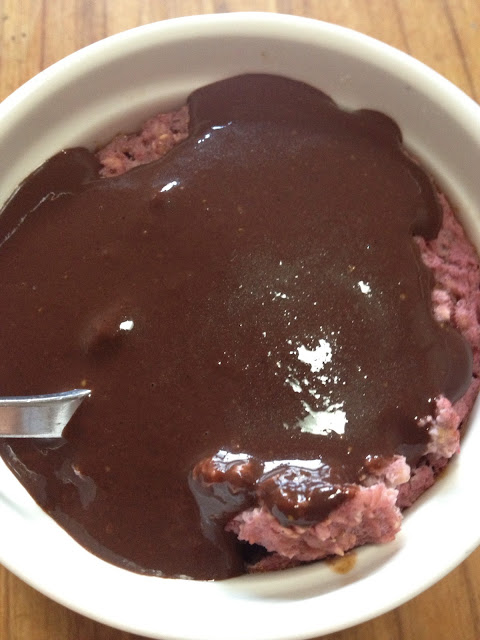 I hate to say it, but I was a little disappointed.  The oatmeal was fine.  The sauce was okay.  Perhaps its because we are at the very beginning of our strawberry season (actually, strawberry season hasn't really started here at all - these were Aussie imports) I had kind of worked up my expectations a little in terms of strawberryness.  A better option may have been the orange strawberry oatmeal where the fresh fruit is left in nice big juicy chunks.  Next time, for sure.  X didn't like his baked oatmeal, so I know what I'll be having for breakfast tomorrow ;)

I went to Sunday knitting for the first time in weeks, and we visited the Mezze Bar in town which has a vegan menu - I ordered the patatas bravas sans aioli, and tea with soy milk.  My friend had the turkish lentil and tomato soup, which was apparently pretty good.  I think I'll try that next time if we go there again.

Dinner was a hodge-podge affair - I made a salad (lettuce, carrot, celery, red onion, spring onion and tomato) and roasted some parsnip, kumara and cauliflower.  I still had some dressing left over from the buddha bowl I had the other night so poured that on.  It was as good as I remembered it being :)  Deane and the boys had chicken and potatoes as well.

(I'm not sure why I feel the need to point out that I am not depriving my family members of meat.  Perhaps I should stop doing that...)

I was a little naughty today and overloaded on fig slice, almond pulp bars (which I refer to as freezer fudge, not that it in any way resembles actual fudge), and vegan hot chocolate - aka soy milk heated up in the microwave with four squares of dark (dairy free) chocolate melted into it.  I spent a while researching various vegan hot chocolate recipes and they all seemed unnecessarily complicated.  Then it dawned on me - I don't need a recipe!  Duh!

I think my craving for hot chocolate came about when I made this chocolate syrup for the boys to have with their ice cream.  Yes I know, it's my own fault.  Back to being good again tomorrow, promise ;)

Monday
So that strawberry baked oatmeal was better the second time around.  Lower expectations re strawberry flavour?  Knowing what to expect already?  Time for the flavours to sit and marinate a while?  The extra added splash of soy milk?  Who could say?  Either way, it was good :)  I bought some more strawberries from the supermarket while purchasing ingredients for the annual Christmas plum pudding (yes people, it is that time of year.  Suck it up and deal with it), so I think I'll try that orange strawberry oatmeal later this week.  I think that's one of the best things about summer - the strawberries!  Agh, I'm getting ahead of myself, we've only just entered Spring...

Lunch is going to be rather unexciting - salad and leftover roast veges.  Dinner will be baked tofu (either this one or this one) with braised celery and steamed kai-lan (aka chinese broccoli).  Deane insisted on buying a large bunch of celery last weekend and has so far, aside from what I've added to meals (vegetable bake, salad) eaten one stalk that I'm aware of.  Gah!  We're also getting a bunch of celery in this week's Foodbox so I decided it was time to find something to do with it - cue the braised celery.  I'm not really a fan of celery, but find it tolerable when surrounded by other flavours.  I can handle it in a salad now, and I'm interested to see how it goes with dinner tonight (I'll be using Olivani spread and vegetable stock instead of butter and beef stock).  I was surprised to find I enjoyed the braised fennel we had a while back despite not liking aniseed flavours.  Mushrooms are becoming tolerable too, to a certain extent.  I'm not going to eat them on their own, but if added into a stew or bake, I'll no longer pick them out (although when preparing the meal I tend to cut them into larger chunks, just in case I change my mind...)

I've been researching a little more the common deficiencies in a vegan diet, and how to combat them without resorting to supplements.  Hopefully this will quell any possible fears my friends and family may have (Deane, I'm looking at you.  You claim to read this blog (still don't believe you) so here you go):

Common deficiencies, and foods to eat to avoid them
Vitamin B12 - nutritional yeast and Marmite.  Need I say more?  btw, water crackers with soy cream cheese and marmite are 'da bomb'.  The question now is, are you raising your eyebrows because you don't believe me, or because I used the term 'da bomb'...?
Vitamin D - this all depends on whether you think sunlight is enough.  Some say yes, some say no.  In any case, there's Vitamin D in mushrooms (and as you can see above, I've started eating them), and we have soymilk available with added D.  I haven't yet looked in to fortified orange juice and whether we have any readily available.
Calcium - dude.  Got it covered.  Broccoli, almonds, almond milk, soy beans, soy milk, tofu, soy yogurt, molasses, bok choy, tahini, chickpeas, oranges... need I continue?
Iron - admittedly, slightly more problematic, particularly with the level of tea that I drink.  Y'all know the tannins in tea inhibits the absorption of iron.  But with iron readily available in legumes, grains, nuts, seeds, and leafy greens, I think I'm going to be okay ;)
Omega-3 fatty acids - flaxseed, chia seeds, beans, squash, berries, leafy greens, cauliflower, broccoli and brussels sprouts.
Protein - I don't think I need to go in to that.  It's well and truly covered in all of the above-mentioned foods.  Looking back over my last week's food intake, I am within the recommended level of daily protein intake each day.  Which, surprisingly, is better now than it was when I was on a normal diet...

See?  Nothing to worry about!  I probably eat better than you do ;)

Jumping off the vegan band-wagon for a bit... I finally took a pic of the finished socks - bear in mind that these are mens socks on a woman's feet, so they look a little ridiculous: 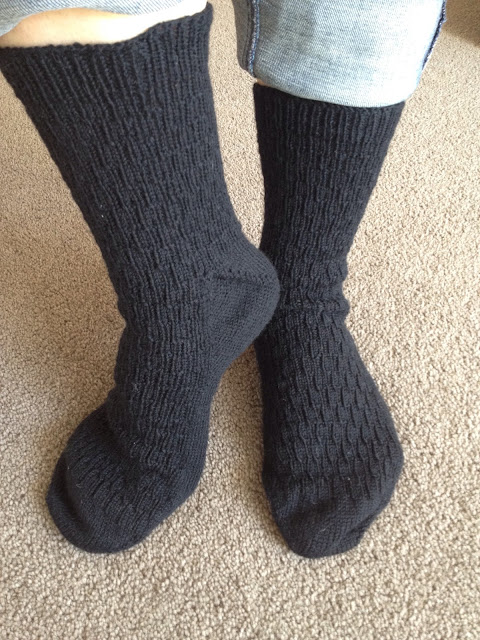 Syncopation socks, knit in Patons Patonyle sock yarn.  I love the pattern, it is so easy to knit!  The way it's written out, although a little unconventional, is the easiest thing in the world to follow so there is absolutely no chance of screwing it up.  And I am really coming to love that fleegle heel.

I got a little bit done on my Cloud Illusions shawl, finally.  It's been sitting abandoned in my knitting bag for weeks.  Probably because I haven't been going to knitting on Sundays, and haven't really done any knitting at all aside from the socks.  I'm only 16 rows (of 78) into the lace section, but at least there's progress: 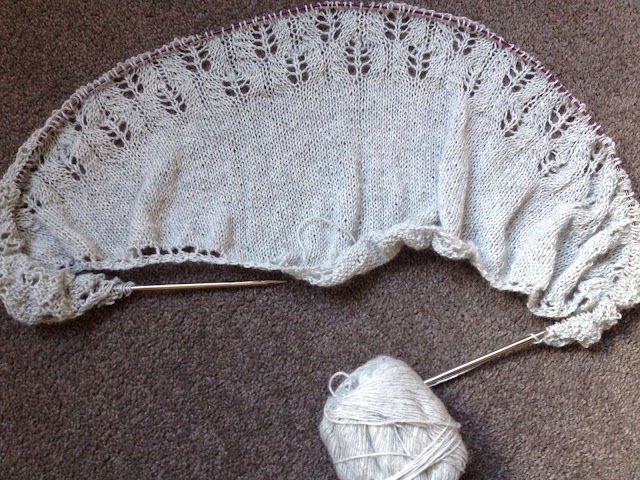 Right, time to stop avoiding my assignment and get on with it!  But first, research into tofu presses...