To the kitchen, not the family, before anyone starts freaking out or getting over-excited ;)  We went shopping on the weekend in order to purchase my birthday present - a shiny new espresso machine, red to match my knife man and various other kitchen accessories: 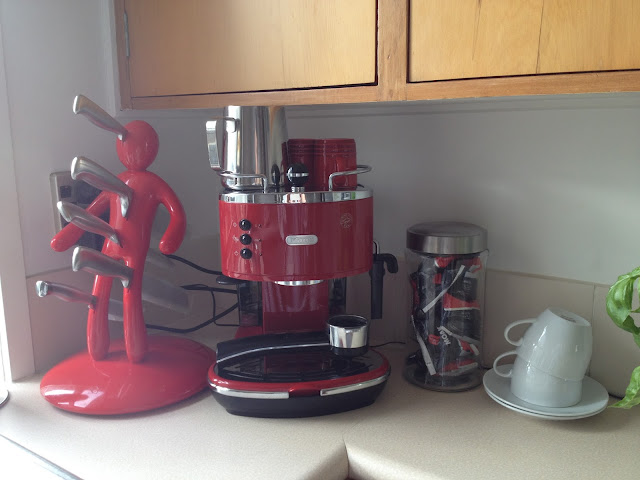 Of course, we also had to buy a milk jug, some espresso cups for Deane, and some cute little cups and saucers to go with.  I've checked - normal-sized coffee cups don't fit.  Not to worry, one does not need a large espresso coffee.  One can just have two!  ROFL!  It is rather straight-forward to use, and took all of a few seconds to figure it out.  Sadly, soy milk doesn't froth nearly as well as cows milk (I've done a comparison - I made the boys a fluffy each yesterday).  However, I still get a decent amount of froth and can make a latte either with the little paper coffee pods (in the jar in the picture) or with normal espresso ground coffee: 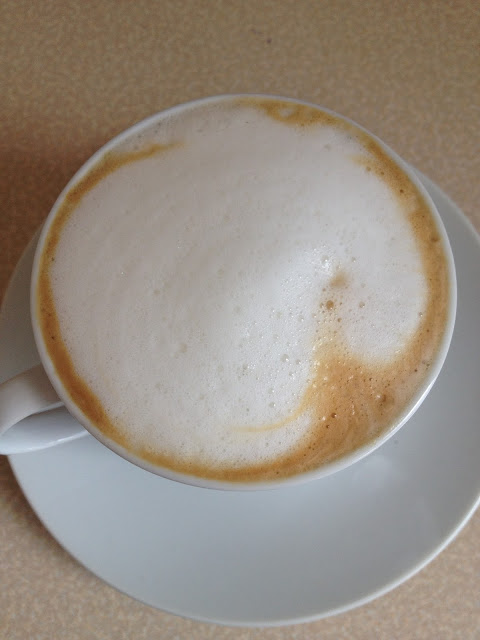 Its fun playing with my new machine, but I have to limit myself to two coffees a day since any more than that can cause havoc with my digestive system.  Not to worry, there's still plenty of room for tea :)  I do have Deane to make espresso for though.  And he drinks a lot more coffee than I do!

I had originally set my sights on a Nespresso machine and have been coveting one for over a year.  I remember wanting one for my birthday last year, but ended up getting a TV for upstairs so I could watch the Olympics in peace without having to war with the kids over screen time.  But after much research, thought and discussion, we decided to go with the one we got (it was cheaper by half, and you aren't limited to Nespresso (or other) aluminium pods which may or may not be recycled, and that you have to drop off to the Nespresso store in Newmarket - our machine takes paper pods or normal espresso grind coffee).  I'm very happy with our decision.  Plus, it was way cheaper than getting an iPhone 5, which is what Deane was planning to get me.  Sure, my phone's a little banged up and it's had a hard life, but it still works perfectly and I take it on runs so there's potential for more damage.  Might as well wreck the old one rather than a new one.

Aside from my birthday, last week was a long, slow, uneventful week.  We took the boys to the Auckland Museum - the ocean exhibition was fascinating, and there were many lovely exhibits throughout the museum.  I practically ran through the war memorial floor though.  I always get a little teary-eyed when I think of what people had to suffer through, and the millions upon millions of people who died in horrible conditions (particularly during the holocaust).  I know there is horror and heartbreak and bad things happening all over the world, but I try not to think on it too much - I'd be a completely incoherent emotional wreck if I did.  I have enough trouble with everyday life sometimes (I get emotional over TV and radio ads, that's how ridiculous I am.  Some days I just avoid the news entirely), without adding in historic events I had nothing to do with and no control over.  Ahem... moving on...

I only managed a 5km run on Tuesday and nothing else during the week which, combined with the copious amounts of chocolate consumed and several muffins,* I really needed to get out on Sunday.  After having driven through Auckland Domain on our way to the museum on Monday and seeing how lovely it looked, I really wanted to run through it and enjoy some of the sights.  So off I went, up Hepburn Street (once again, not a good way to start a run.  That hill is a killer!) and along K Road and Grafton Bridge to the Domain.  I snapped a few pics on the way around: 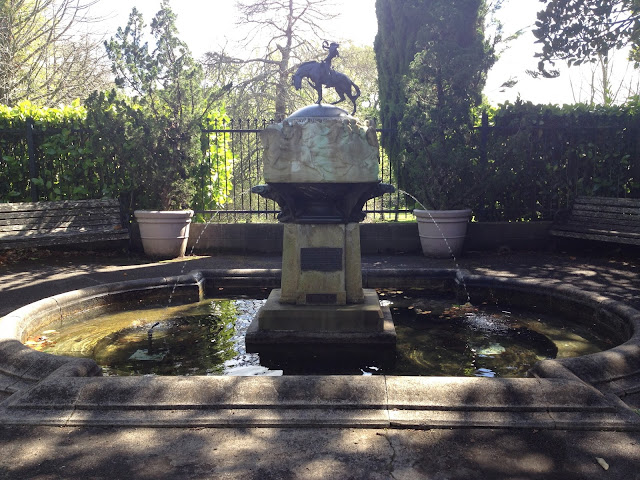 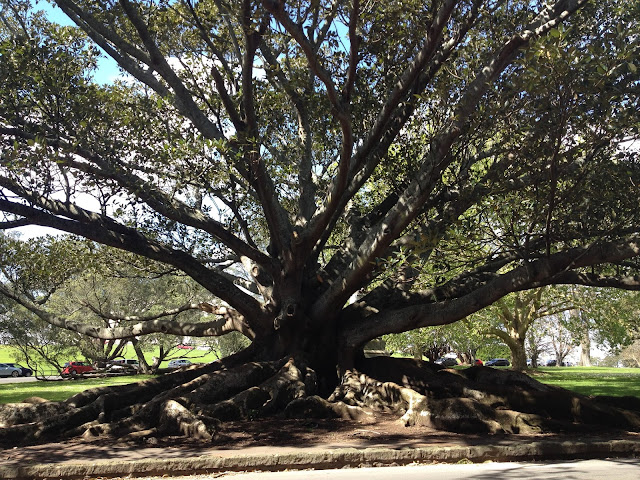 Random tree with a rather impressive root system.  Just found it interesting... 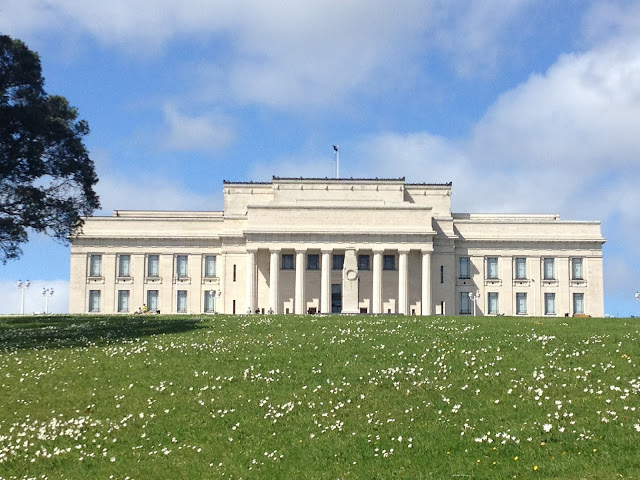 The Auckland Museum; War Memorial.  And a field of daisies and buttercups.  Pretty. 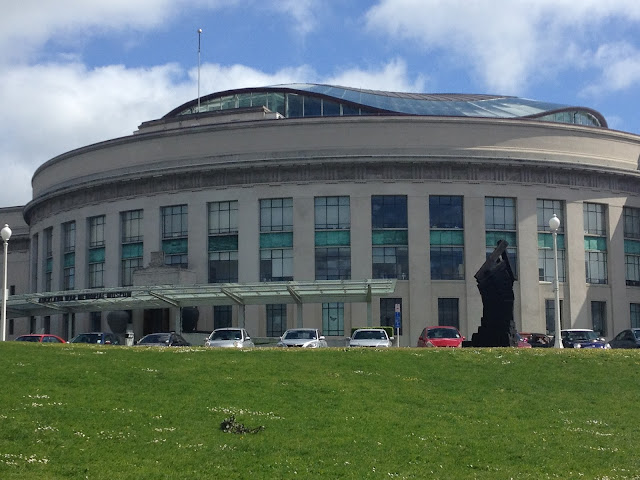 It was a lovely sunny day, and I forgot sunscreen yet again.  However I did manage to avoid getting burnt, yet again.  We're coming in to summer though, so my luck with that is sure to run out soon.  I may attach a bottle of sunscreen to the front door handle as a reminder...  There were plenty of shaded areas during my run, particularly through the park and along Symonds Street.  I did get a little lost through the Domain (as I expected I would) but had some fun exploring.  There are quite a few sculptures I missed entirely so I think I'll have to go for another run through there again soon to see if I can spot them, and try a few different paths.  Perhaps even run the Sri Chinmoy Peace Mile and time it to see how long it takes me, now that I know where it is ;)  The rest of Sunday was back to being lazy, in preparation for the boys going back to school (woohoo!!!)

It is now Monday morning, the house has been quiet for over an hour (ah, bliss) and it is time for me to get on with such things as study and housework.  I got the mark back for my second Accessing Information assignment - 92%!  My highest mark yet!  And it has a 40% weighting for the overall grade.  Gotta be happy with that, right?  Now it's on to the last bit of work for the two papers, and trying to decide what paper to do over summer.  Probably Business Communications.  Or perhaps Organisation and Management.  Maybe even both!  Hmm, lets not get crazy...

*Yes I cheated.  I totally, completely did not achieve my self-imposed (and lets be honest, slightly ridiculous) challenge of no baked goods for all of October.  But seriously, who really cares?  In all fairness, I have cut back significantly compared to recent months.  That's something, right?
Posted by kreachr at 10:17