Two mornings this week I have been up before dawn, running the streets of Auckland.  Oh, how I missed those early mornings!  It's good to have them back again.  Tuesday morning wasn't the best of mornings to be out and about.  It was very windy, although I didn't notice much until I hit the open areas of Tamaki Drive where the wind was coming straight off the sea.  By golly, it nearly blew me over!  And the sky was cloudy and moody looking, so I didn't get any nice sunrise pictures.  I was happy to just run my 11km and head on home for breakfast before the rain arrived.

This morning was a slightly different story.  The night before I set my Nike app to remind me I wanted to go run at 5.45am, and made a steel cut oatmeal bake ready to go in the oven when I got back.  When I got up I grabbed that out of the fridge and set it on the bench, then I was out the door at 6.01am.  The birds were singing, the air was crisp but just a little bit warm, and the streets were already buzzing with boot-campers, runners and cyclists.  Tamaki Drive was vastly different to Tuesday - the water had barely a ripple in it.  The sky was still cloudy, but not so bad.  I did get a few sunrise pictures on my way: 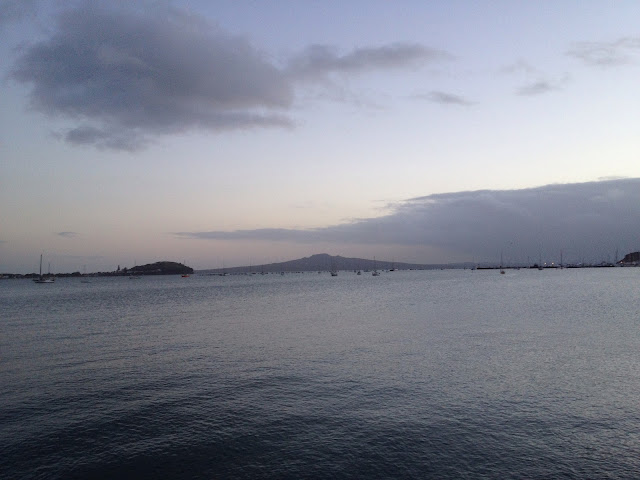 This one was looking out to Rangitoto Island, before the sun started peeking up over the clouds. 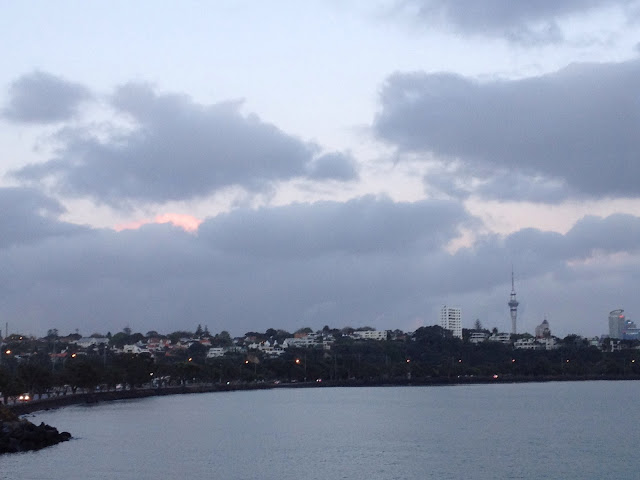 It occurred to me that I never really take pictures in the other direction, so here's one looking back towards the city centre 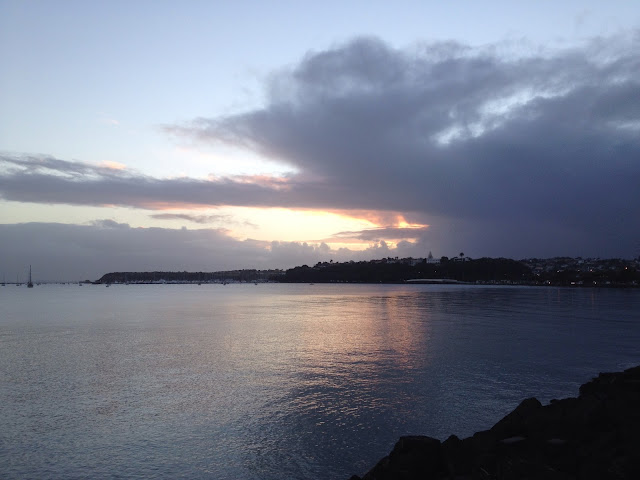 Street lights are still blazing, but the sun is starting to come up.  I love the reflection on the water.

The happy protest man was out again, calling out his cheery good mornings to the passersby.  I guess I've never mentioned him before... He stands on Tamaki Drive most mornings with one sign or other (this morning I believe it was GCSB/CIA or something along those lines) protesting something the government is doing or not doing.  But he's so friendly, waving to all the cars, chatting and saying good morning to everyone.  So I call him the happy protest man (in my head, not to his face).  I think he ran for mayor in the latest election.  Wonder how many votes he got...?

There's something about getting up and out of bed early just to head outdoors.  Most people are still asleep so the streets are quieter than usual, the birds are very vocal, the air is fresh, and there's just so much to enjoy.  Then you've got the whole day ahead of you!  Tuesday was very productive for me - not only did I run 11km, I did all my gardening, a weeks worth of washing and had dinner mostly cooked all before lunch!  Then the afternoon was spent writing up and submitting an assignment.  I felt more than okay with sitting down and knitting that evening (have finished the sleeve increases on my versio hoodie, working my way down to the body increases and splitting off the sleeves).  Today... slightly different.  I've run 12km, but now its 10am and I haven't really done a lot.  My excuse was that I was waiting for the new oven to be delivered ;)  Better get my hustle on - kids shoes and plant pots to buy (for the basil and mint - I'm going to try not to kill these ones...) and I'm going to see if I can hunt out some barista soy milk (so it froths better for my lattes) and some cheap apples (I'm hanging out to try some apple butter).  I hope you have a lovely weekend!
Posted by kreachr at 10:17