This weekend I will be labouring over my assignment that I still have not managed to complete because it is taking waaaaaaaaaaaaay longer than I thought it would, and is proving far more challenging than expected.  Surprise!  The long weekend is going to be boring and not at all filled with laziness, reading and crafting.  Sad face.  I will most definitely be going for a run on Sunday though.  I think it'll have to be about 15-16km at the most, since the half marathon is next weekend (eek!).

I had two great runs this week, complete with pictures.  Here's some from my 12km on Tuesday: 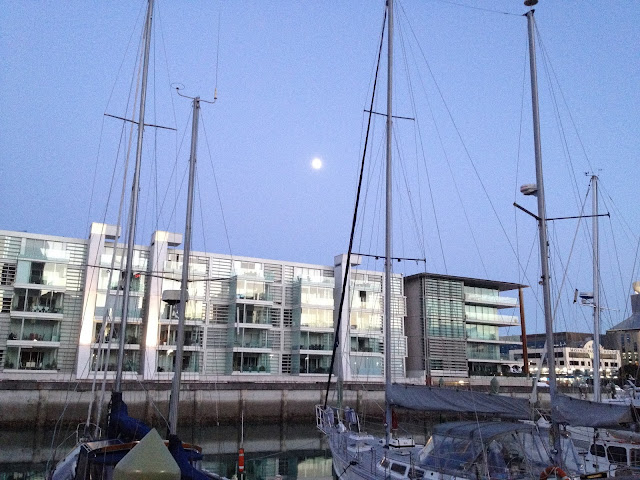 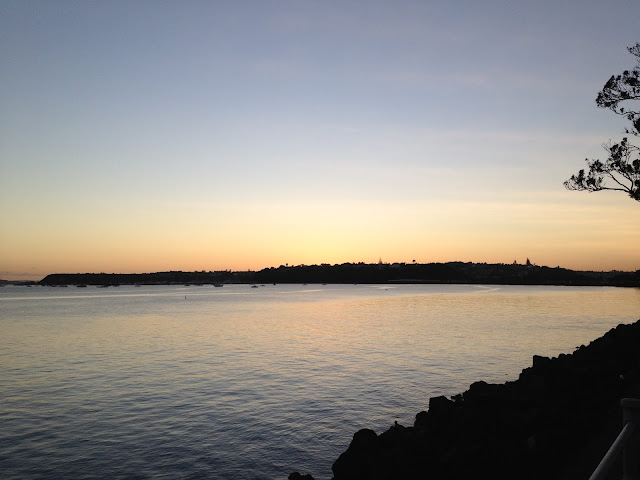 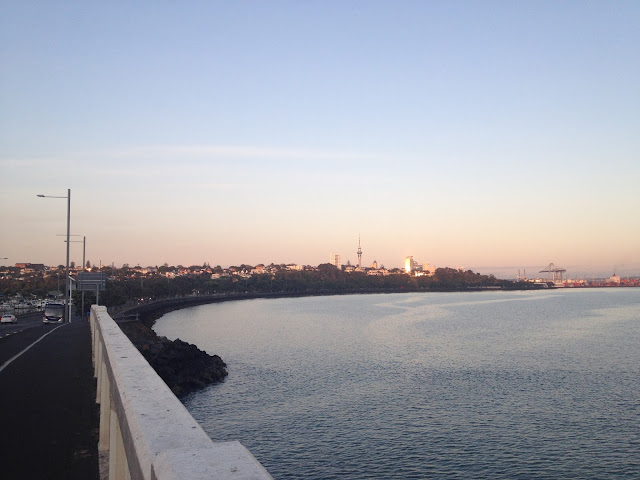 Such pretty colours.  I sometimes wish there wasn't any traffic around to ruin the peacefulness of the early morning.  But then I'd feel a little less safe about running at that time, so I suppose it's a trade-off.

For Thursday's 14km, I got out the door before 6am and oh, it was beautiful: 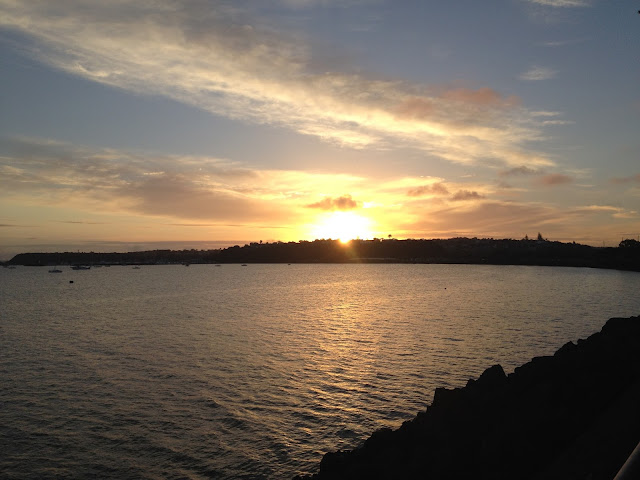 Would you just look at that?  Gorgeous, isn't it?  That was actually on the way back.  I happened to look over my shoulder to see the sun peeking up over the hill and just had to stop and snap a picture.  Absolutely stunning.  On the way out to Okahu Bay (my turnaround point) it looked a little more like this: 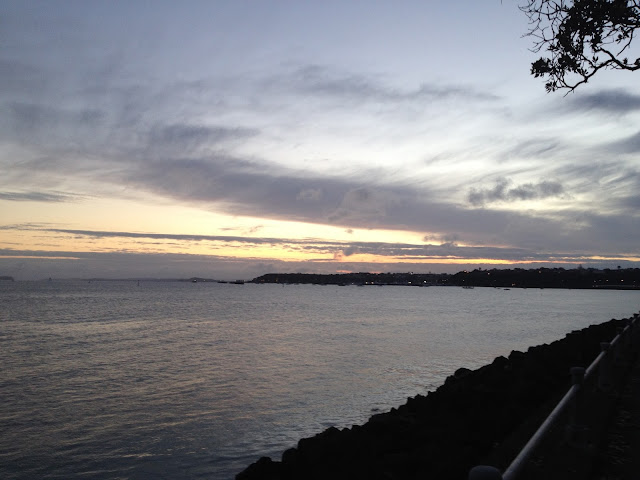 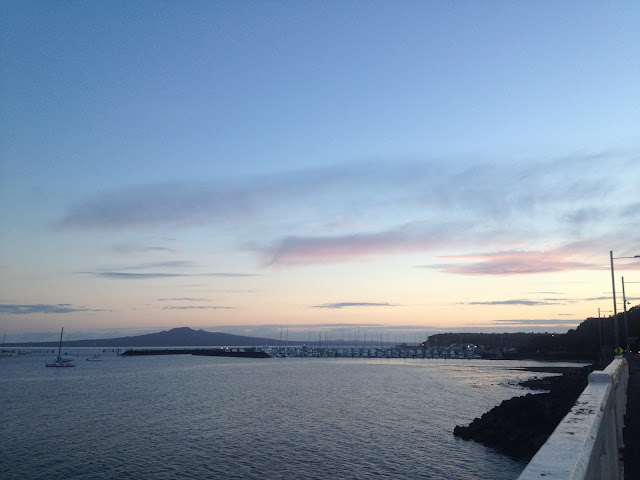 Still pretty but not quite as spectacular, don't you agree?  I'm a little bummed that my phone camera doesn't take very good night shots, because the Sky Tower has looked rather neat the last couple of months and is usually still lit up when I head out.  It's been pink all this month, and was blue during September.  My particular favourites have been when it was rainbow coloured for pride week and when the marriage equality bill was passed, and sometimes they do a cool orange and purple combo.  Fun :)  But I digress...

My run on Thursday morning, as I said, was fabulous and filled with lovely views of the sunrise, but my GPS tracking had a meltdown and clocked my run at 19km.  Um, don't think so...  Especially when it tried to tell me I had run 4km at 0'00" pace!  It stuffed up all my 'best' records, giving me new fastest 1km and 1 mile times of 0:00, a new fastest 5km time of just over seven minutes, and a new fastest 10km time of half an hour.  Ha!  Not likely!  I've emailed the Nike support crew and they're going to fix it for me.  Bless them.  Although I'm pretty sure it was the new auto pause feature on the running app that caused the problem in the first place, in combination with me taking photos without properly pausing the tracker first.  Note to self: stop taking photos during runs!  I took some sport beans with me for that run to try them out.  During the run they were fine, but I had some issues about half an hour after I got home.  Not sure if that was the sport beans or the espresso coffee though...  Or the lack of breakfast pre-run.  Perhaps I'll stick to Dextro tabs for the half, just to be on the safe side.

The 'rents are heading up as I type this post and should arrive early afternoon, around the time the boys finish school.  They're not staying the whole weekend though (heading further up the island for a spell before stopping by on the way back down at the other end of the weekend) so hopefully I will be able to sequester myself in a room to work on my assignment with minimal distraction.  Fingers crossed.  Perhaps I should lay out a large plastic sheet and stick a big bin full of food and drinks in the middle of the lounge floor first, so as to avoid interruption...

Food-wise, I think I've settled on vegetarianism, with minimal dairy and egg, and no honey.  It appears I just can't quite give up milk chocolate.  Plus I think I'd probably cave to the occasional cheesy indulgence (still thinking about that cheese and apple grilled sandwich...).  I can happily go without most dairy though - soy yogurt is delish (if you get the right ones), and there are all sorts of alternatives for sour cream and mayo - both tofu and nut/seed based are good.  I've rather enjoyed tofu mayo (third recipe, scroll down the page), tofu sour cream and pumpkin seed and cashew 'cheese' in some wraps this week with various combinations, along with this salad and other bits and pieces (avocado, cherry tomato, iceberg lettuce, cucumber...).  Omnomnom!!!  As for the wraps, I've been a bit lazy and haven't made any lately, but have found that the Farrah wraps (I'm using sunflower and linseed at the moment) don't split or crack, so you can wrap them without it all falling apart.  Hurrah!  I also found a ridiculously easy and delicious kale and lentil soup.  It is crazy good.  Although that may have something to do with the vegetable stock I used.  This week what with the enriched soy milk, tofu, grains and lentils, not to mention the oatmeal (I'm getting to that) and my recent rediscovery and enjoyment of scroggin (aka trail mix), I think I've done a pretty good job of getting my important proteins, amino acids, iron, fibre, vitamins, healthy fats, etc etc etc...

I splurged on a delicious, big, juicy peach the other day at the supermarket (I say splurged because that one peach cost $4) and split it into two.  For the first half, I made peach cobbler baked oatmeal.  It was yummy, but I found that the cobbler was too stodgy.  It needed quite a large splash of soy milk to accompany it.  For the second half I made a peach and strawberry oatmeal, based on this peach pie oatmeal recipe.  I just added strawberries because I thought they'd go well with the peach.  I was right ;)  I enjoyed that peach so much I decided to buy another one for another two breakfasts.  I ain't sharing my peach with nobody!  Of course, nobody else in this house wants it anyway, so that makes it easier to keep to myself ;)  Deane's allergic, and the kids don't like them.  Yay, more for me!  I adore the smell of peaches and nectarines, and have a tendency to try and inhale them.  They smell like summer.  I'm slightly weirded out by the fuzz on peaches (and apricots) which is why I'll usually opt for nectarines, but sometimes a fresh, juicy peach is so alluring I can look past its velvety outer skin.  Covering it with other things like oatmeal helps ;)  I'd really like to try grilled peach steel cut oats (or just normal oats) next.  Yum!!

Other foodie plans for the long weekend include making another lentil walnut apple loaf.  I ran out of my freezer stores, so it's time to make another one.  It is so yummy, and really great to have on hand in single portions.  I'll be having this for dinner tonight while everyone else has roast beef.  Tomorrow morning I'm planning a veganised version of cinnamon rolls - I'll let you know how they turn out, and whether anyone notices ;)  I figure it'll be a good test run for Christmas.  Mum enjoyed them so much last Christmas she requested them for this year as well.  I'd hate to try and alter the recipe for Christmas morning only to have it not turn out, so being the good forward-thinking planner that I am, I'll give it a whirl now so I have time to iron out any kinks.  With extra people on hand to help eat them, I think this weekend is an excellent time to trial an adapted recipe :)  I'll be making a half batch (which will be a quarter of the original recipe) because this recipe makes a ridiculously large amount of cinnamon rolls!

So, how about you?  Got plans for the long weekend?  Or if you're from somewhere other than New Zealand, got plans for your normal-length weekend? ;)  See you next week!