Bring me peaches, lots of peaches.  They are the best thing evaaaaaaaaar!!!  Okay, maybe I can think of some things that are better than peaches, but oh my.  Breakfast this morning was out-of-this-world good.  I know I'm a little unusual in that I'll happily sit at the computer or on my phone for an hour or so debating with myself about which breakfast recipe I should try next.  For example, last night I was flicking back and forth between peach breakfast bake, peach oat smoothie, or some other peach and oatmeal concoction (such as baked peach almond oatmeal).  You'll see the recurring theme here - peach.  I had half a peach left to use up, after having made grilled peach oatmeal the previous morning.  Which, by the way, was amazeballs: 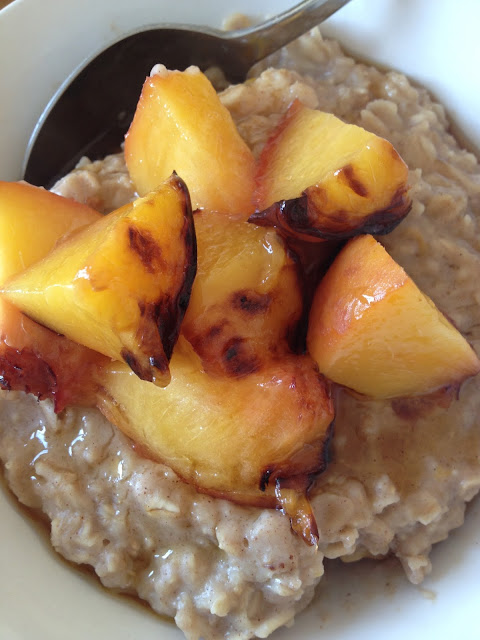 I had a drizzle of maple syrup on top - delish!

I grilled the peach in the oven and just used normal rolled oats because I still haven't bought any steel cut oats (which I'm happy to see are now available at the supermarket.  Also now available at the supermarket - Sweet William dairy free milk chocolate.  Win!!).  So after much deliberation, and getting a little sidetracked with thoughts of a PB&J date smoothie (tomorrow perhaps - I happen to have four medjool dates left in the fridge) I settled on the peach breakfast bake.  I don't have shredded wheat so I used two Weetbix instead (basically the same thing, right?), and cut down the recipe to approximate 1/3 measurements (in other words, I basically just winged it), baked it for about 30 minutes (maybe more like 27 - I got impatient) then dished it up with some peach and mango soy yogurt: 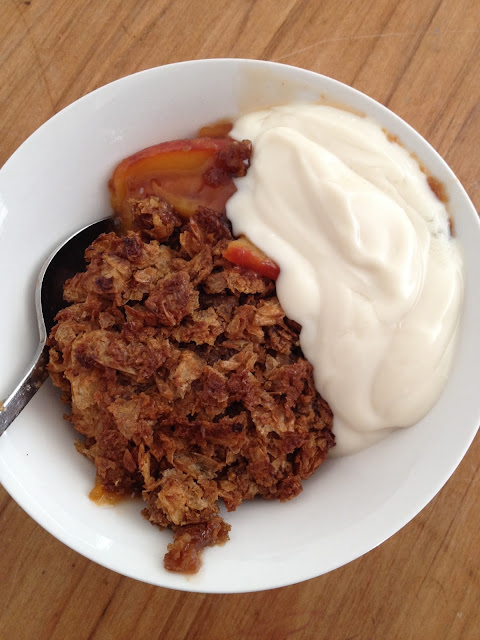 Let's just say I'm glad I only made one serving, because if I'd made a three person serving as per the recipe, I'd have eaten the whole thing.  Damn, that was good!  Sadly, I am once again out of peach.  Oh well, perhaps I should start working my way through the pears in the fruit bowl...

The veganised cinnamon rolls were a resounding success - they were eaten by no less than eight family members (I had some extended family that just happened to be passing through at the time - we'd met them at the airport and they called in briefly for breakfast before heading up north with mum and dad).  Sadly, it didn't occur to me to take a picture of them in the dish before I'd served them up.  But oh, they did look so very pretty.  This batch (only the second batch I've ever made) came out looking so much better than the first, which was all wonky and not very well rolled.  And it tasted awesome.  Dad didn't say anything about the taste, so I can only assume he didn't notice they were made with soy milk and olivani spread.  Which I found kind of funny since he put something in the fridge the day before, on top of the olivani with the comment that "I won't be needing that".  Haha!  I was almost tempted to make another batch just so I could take a photo...  Luckily I came to my senses and just ate T's leftovers instead.  I promise to take a picture next time, which will probably be the Christmas batch.  Can't wait!

Our long weekend has been pretty good.  We went to Armageddon on Saturday.  It's a really neat event but unfortunately is now so crowded with random people just being nosy (ie: not fans) that it is very hard to move around and see everything.  I'm not comfortable in large crowds, and apparently neither is X.  T was being carried on Deane's shoulders most of the time, so I was in charge of X, who would wrap my arm tightly around his neck and cling on to it like a burr.  I was basically glued to him and had to shuffle carefully so as not to trip us both up.  Not the easiest or most comfortable way to walk!  A couple of hours was enough for us to have a look around, and I was more than happy to escape the sea of heaving bosoms and painted flesh for a bit of fresh air.

On Sunday I went for a longer-than-planned run in the morning.  I had decided to do a 15km - my current favourite route up Hepburn, along K Road and Carlton Gore Road, down Ayr Street and around Shore Road to Tamaki Drive.  I figured I wouldn't be out that long so I didn't put on sunscreen or take my hydration pack or any refueling snacks and decided that if I happened across a shortcut, I'd take it.  I had noticed the last time that there was a walkway - Hobson Bay Walkway - that cut around the hillside, and I was curious about it.  The walkway is visible from Orakei Road.  I thought that perhaps it would join up over the other side of Hobson Bay and I'd be able to shorten my run by a kilometre or two, being conscious of the fact that the half marathon is next weekend and I'm supposed to be tapering so I have enough juice for the race.  So when I found a start point to the pathway just past the Shore Road Reserve, I took it.  It was a rather nice little detour: 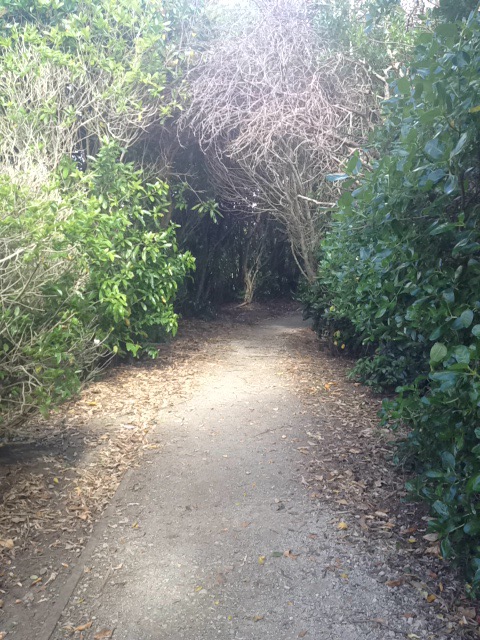 After this view, I had the Teddy Bears' Picnic song stuck in my head for the rest of my run.  'If you go down to the woods today, you're sure of a big surprise...' 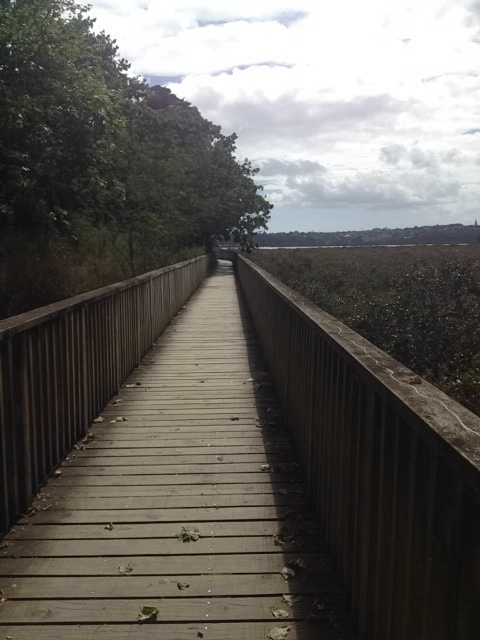 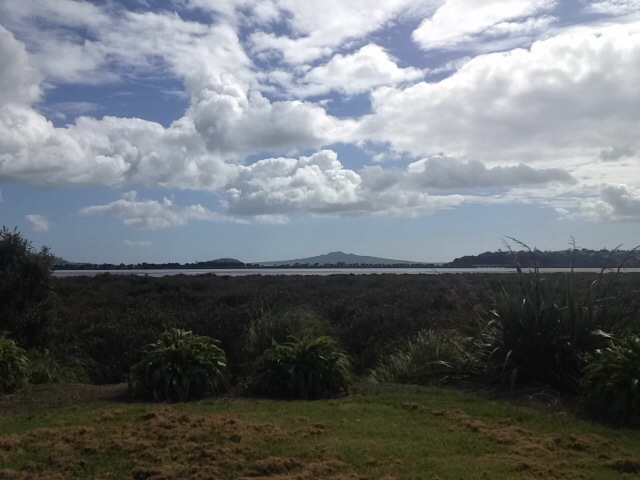 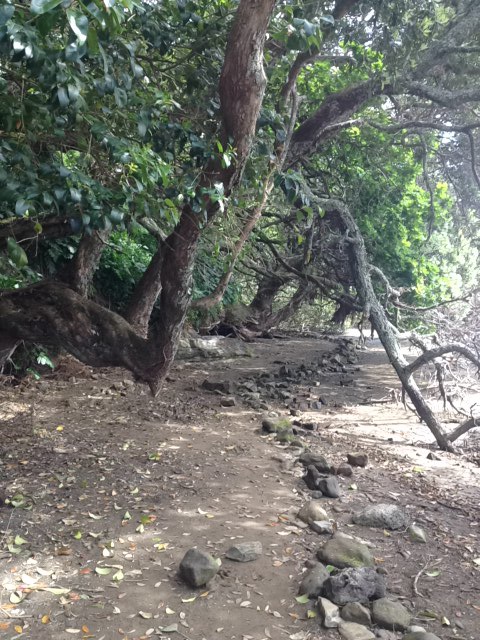 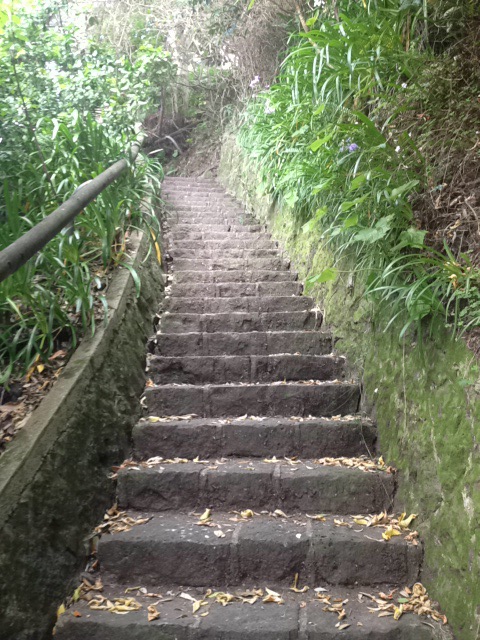 Unfortunately, it had a dead end.  Or at least I thought it did.  I went up these stairs which took me to Logan Terrace, because it looked as though the path ended.  I had no idea where Logan Terrace was, or how to navigate home from there, so decided my only option was to head back the way I had come and run the original route.  This ended up turning my 15km-or-less run into an 18km!!  Oops...

I had a look at several online maps when I got home (after some yoga - my hips needed a good stretch after all those hills!) and it would appear that the pathway does continue on much further than I thought.  Having said that, it appears to end in Hobson Bay, and doesn't seem to join up with (or near) the Point Resolution Bridge in Point Park, which by the way would be really handy... It looks as though the Council are working on the walkways around the area though, so I'll keep an eye out for any new developments.  In the meantime I guess the only way to get from one side of Hobson Bay to the other is to go around the outside, or cut through parts of Parnell.  Maybe take the pathway through Awatea Reserve up to Awatea Road and carry on to St Stephens Ave.  I also noticed there's a new walkway around Orakei Basin on the other side of the bridge.  Hmm, new running route...?

Perhaps it wasn't the best time to be doing it, but I enjoyed going exploring.  It was out of the ordinary for me (I'm usually quite firmly in the 'stick to what you know' camp), and I think I'll have to try it again some time.  What better way to learn about the place than to go adventuring?

Later that day we took a walk down to Queens Wharf to check out the tall ships that are in port for the long weekend.  Very cool!  The boys were only mildly interested though.  They're tough to please - they merely shrugged their shoulders when we took them to Disney World and Universal Studios in the US.  Kids these days ;)

We have now arrived at the last day of the long weekend.  I still haven't worked on my assignment.  I guess that will be my mission for today then.  I hope you're enjoying some good weather wherever you are.  Go out and soak some of it up, and spare a thought for me...
Posted by kreachr at 09:33