Turning 34, and becoming a stalker

Today I am 34.  Yesterday I was 33.  Odd how you're suddenly a whole year older but you still feel exactly the same.  My plans of a run at Cornwall Park were scuppered this morning - I had to stay in bed so Deane and the boys could bring me breakfast (PB&J and banana on wholegrain toast and a cup of tea, as requested at 3am during an unusual moment of Deane being awake in the middle of the night - what better time to put in your breakfast request?) and give me gifts wrapped in fabric and tied with safety pins (someone's been rifling through my craft supplies again) - two large blocks of Whittaker's chocolate, and two tubes of Olay moisturiser with SPF50 sunscreen.  The message, one can only guess, is "eat more junk, we're sick of all the vegetables, and don't get burnt when you're running this summer, your tan lines already look weird enough".  Deane then had to go to a meeting which meant I couldn't go out for a late morning run.  In any case, it's a little wet and chilly outside.  This gives me the perfect excuse to be lazy and knit instead ;)  I've started the Versio sweater (using the pattern notes for a modified hood by another Raveler - I'm not one for big collars) and am working on the sleeve increases at the moment.  I knit a swatch yesterday and found that although my gauge was a little tighter than the pattern recommended, it was easily stretchable to the correct size so will block out quite easily.  Having read through some people's notes, I've decided that knitting the medium size (which is the size needed for my wide shoulders) and not reducing down to the extra small size (for my non-existent boobs) will probably work fine for what I'm aiming for - a relatively loose-knit, kinda floppy light sweater that can go over a bikini or tank top when the weather gets a little cooler on summer evenings, or when we're at the beach and I want something light to throw on.  Whether this will actually work in practice is another thing, but we'll see how it goes.

As for the 'stalker' part of my post title, I was in the kitchen the other day and realised that several of the things I'd eaten recently or was planning on eating, and the stuff I was looking at in the jars on my bench all came from one website - Oh She Glows.  I was starting to think that if Angela was magically transported into my kitchen and saw my menu board and the jars sitting beneath it, she'd think I was some crazy stalker lady.  Maybe she already does.  Maybe that's why she didn't acknowledge my last tweet...  hahaha!

But seriously, she has some amazing recipes.  The latest I've tried have been the black bean and potato nacho plate: 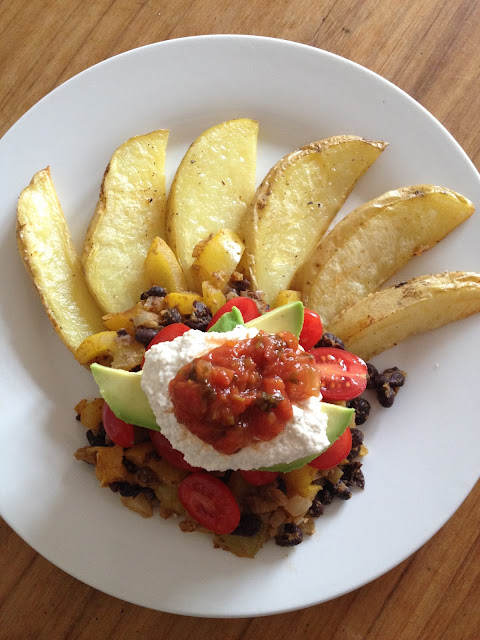 I skipped the nachos - the wedges were more than enough! 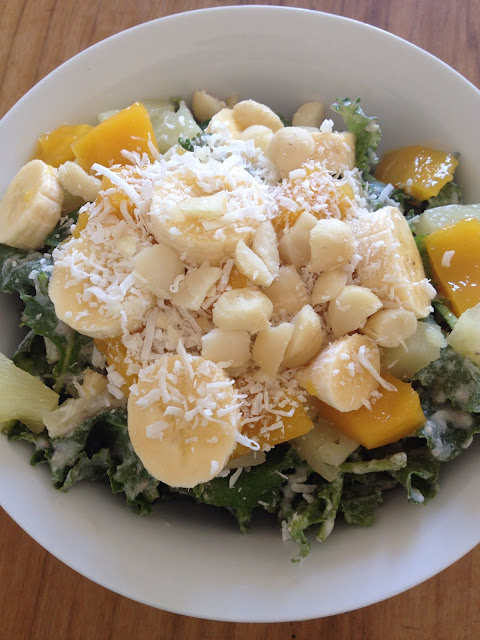 I was going to have the same for lunch today, but ran out of pineapple.  Hmm, quick trip to the dairy across the road...?  The dressing is seriously good, and just enough coconut milk that I can handle it but not feel ill.  Yay, a happy balance :)  I quartered the dressing and halved the other ingredients since the salad was just for me.  Easily repeatable, once I acquire more pineapple :)

Dinner last night was another vege burger with some cashew sour cream (from the layered taco salad recipe - I also used it on the black bean potatoes), lettuce, avocado and tomato sauce.  Every time I have one of these, I remember all over again how awesome they are.  I still have four patties left in the freezer, and no you can't have one.  Make your own!

To be fair though, I haven't focused solely on one website for recipe inspiration.  I've also been poring over Post Punk Kitchen's delights.  I tried the sunflower mac earlier this week (good, but not as good as their mac and shews) and tonight, for my 'birthday cake' dessert, we're having raw strawberry cheesecake.  I've invited friends to come and help us eat it :)  I've had a little trouble getting the filling to set, so if I were to make this again, I'd cut back on the strawberries.  I'll admit I probably went a little OTT using 900g (four full punnets, minus two strawberries).  The recipe calls for 32 oz (which is 907g), but says to take out nine strawberries for the decoration.  Well, I didn't.  I added ALL THE STRAWBERRIES.  Therefore, my filling was a little too liquid to set properly.  I'm hoping the addition of some xanthan gum will firm it up a bit.  If that fails, there's always the freezer ;)  I'm not making the frosting or berry sauce to go with it.  I figured the amount of nuts and strawberries in the cheesecake itself was more than enough.  Plus, I'd run out of cashews and strawberries... I can't wait to dig in to it this evening after dinner, which will include roasted asparagus and baby carrots that I'm really looking forward to.  Fresh fruits and vegetables really are the best, aren't they?

I've been pretty good at not baking, but I did make a batch of double chocolate chip muffins yesterday for the boys and their friends that had come over for a few hours.  I ate about a third of a muffin that T had left behind.  I'm such a cheater ;)

Right, back to blobbing out and knitting!  There's some chocolate that needs to be eaten ;)  I think I'm going to need a long run this weekend...