The vegan trial month finished on Monday.  So far I've had Whittaker's Milk Strawberry chocolate (I ate half the block in one evening.  Oops...), and some cow's milk in a few cups of tea while I was at my stats workshop the other day because there was no soy milk available.  Otherwise I've stuck to the plant-based foods so far.  We're having dinner at someone else's house this evening and I have no idea what's on the menu, so perhaps I'll be eating my first meat dish since August...

I found a smoothie with spinach in it that I like too, which is a good thing considering we have two large bags of spinach leaves in the fridge.  For last week's Foodbox I asked for extra spinach instead of grapefruit and pears, and ended up with two bags.  I managed to get through one on my own, but there was more spinach in this week's Foodbox, so I still have two.  I'm certainly not complaining, I'm absolutely loving fresh salads at the moment :)  But yes, I decided I needed to find ways of getting through it a little quicker, plus the extra nutrients wouldn't hurt.  After posting last week about disliking the green monster smoothie and preferring berry smoothies, it occurred to me that I could combine the two and have the best of both worlds.  Rather than having the spinach as the focus of the smoothie, have it equally sharing the limelight with blueberries and banana, and omit the nut butter.  I'll admit the colour isn't terribly appealing so I didn't bother photographing it (although that can easily be fixed with more blueberries), but the taste was fantastic!  Win!!  And still no added sweetener, because the banana does a fabulous job of that all on its own.  Yay!

Lunch yesterday was something I'd been eyeing up for a while - the roasty soba bowl with miso tahini.  I quartered the recipe (since I was only making one serving) and my miso tahini sauce looks quite different because I used whole tahini made with unhulled sesame seeds, but it was delicious!  Definitely something I'll be having again: 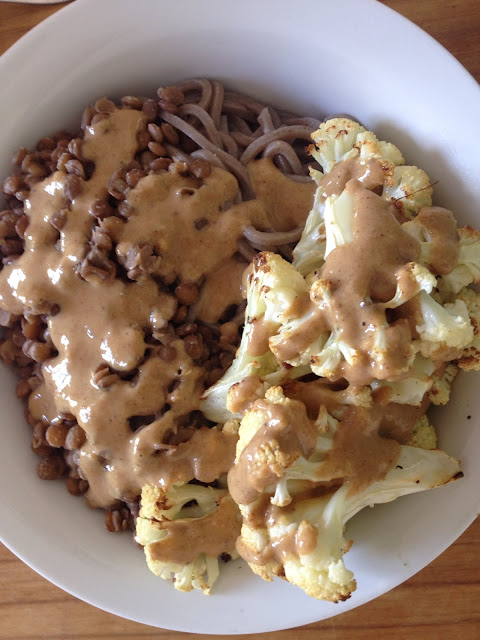 I didn't have any fresh herbs to sprinkle on top to make it look pretty, but I have a tendency to pick them out anyway.  It was very filling too - the soba noodles and brown lentils combined are really great for filling the hunger void.  The boys and I had spent a couple of hours wandering around MOTAT and I was starving.  Mind you, I'm hungry most of the time... ;)

I made some Indian spiced swede cakes (with leek instead of onion) for dinner.  Following the recipe I tried shallow frying the first batch and they were a complete disaster:

(Although Deane still ate three of them, haha!)  Plus, the amount of oil was grossing me out so I got out the non-stick frying pan and put a very small amount of oil in to cook a second batch, and they turned out beautifully.  They went really well with a salad and some roasted asparagus.  Mmmm, the first asparagus of the season.  Drizzled with olive oil and a sprinkling of salt and pepper, roasted at 180°C for about 20 minutes.  Delish! 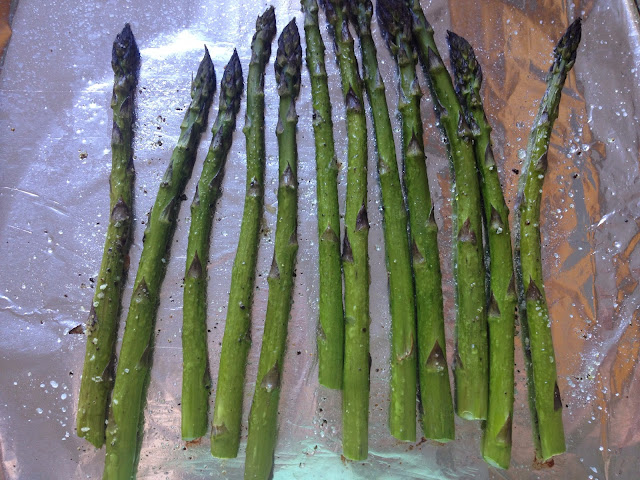 I've been having salad for at least one meal a day for the last few days.  They're so versatile, you can add anything to them.  I headed out for a 12km run this morning (my first since Saturday, one of the downsides of school holidays combined with late sunrises and a paranoid husband that won't let you run unless it's full daylight) then had a spinach, avocado and strawberry salad for breakfast.  Perfect!  (I had a second breakfast of soy yogurt and a mandarin after my shower, and a cup of tea and some freezer fudge for elevenses.  Technically the fudge isn't baking...  I'm such a hobbit).  I think for lunch today I'll give crumbed tofu a go - based on this recipe, although I'll probably alter it slightly and reduce the amounts since nobody else will be eating it.  It should go nicely with the rest of the swede cakes. 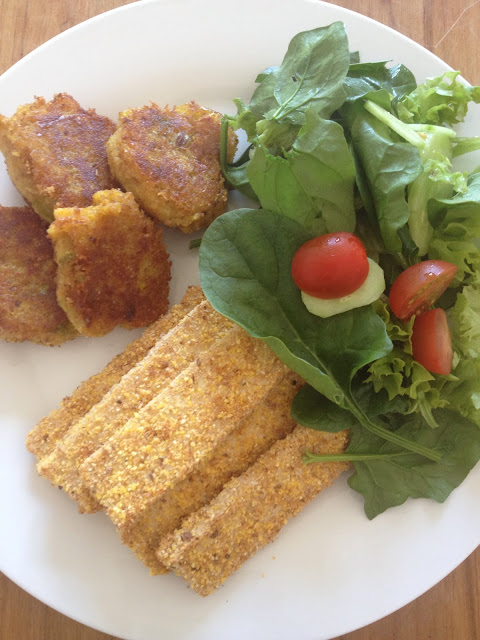 The crumbed tofu was lovely with some tomato sauce.  I only needed to bake it for 20 minutes, because my slices were quite thin.  And as you can see, the swede cakes turned out much better when not completely drowned in oil!  Now, back to our regularly scheduled programming...

Deane decided he didn't like the plain almond milk I was making because the acidity of his coffee would cause it to split.  Although it tastes fine and doesn't have a lumpy texture, it looks rather unappealing.  So we're experimenting with different ways of emulsification.  In yesterday's batch I added a teaspoon of lecithin granules, and added a pinch of salt and a teaspoon of vanilla for flavour.  Much better!!  The milk is very palatable on its own, unlike the plain almond milk which I found to be too strong in almond flavour to drink by itself (although it was fine on cereal or in tea).  Next I'll try coconut oil.  I have a feeling I'll be sticking to the lecithin though.

In crafty news, I've been surprising myself with the rate of progress on my Ron Weasley blanket.  I've connected all the blocks into rows, and am halfway through joining the rows together: 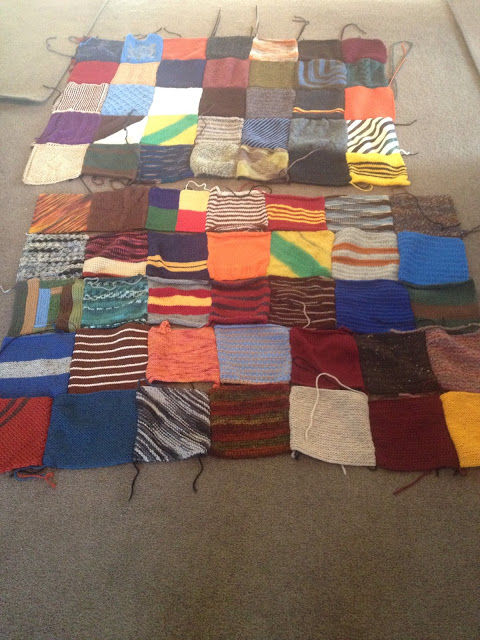 Joined rows at the top, unjoined at the bottom.  It's proving to be quite challenging fitting all the different-sized squares together.  They were all supposed to be 8" square, but this is not a perfect world and everyone used different fibres, different patterns, and clearly had different ideas of what 8" actually is so they're all quite varied.  This blanket will definitely need an edging to help square the blocks around the outside, and will also need a backing to hide all the seams and loose ends that I am most definitely not weaving in.  It's an odd-ball blanket, but it's beautiful in an ugly kind of way.  I'm falling in love with it already :)  I quite enjoyed reading all the names of the people that had made the blocks while I was joining them in rows, and look forward to sending them all a wee message with a picture of the finished blanket when I'm done (which could still be some time from now, but hopefully before Christmas).  Unfortunately, this blanket isn't terribly portable so I'm going to need something else to work on for when I'm out and about.  Perhaps I'll wind the laceweight yarn and print out the pattern for that hoodie...  Summer is on its way here if the recent weather is anything to go by.  I was in shorts and jandals yesterday while traipsing around MOTAT.  Luckily, it hasn't taken long to break in my summer jandal feet.  The first time you wear jandals in the new season always feels really weird and at the end of the day your feet are a little sore, but it doesn't take long to readjust.  Sadly, my jandals are coming to the end of their life.  They've been with me for about eight years or so, and the sole of one has worn through to the leather.  The other isn't far behind.  I'll be sad to see them go, it'll be like saying goodbye to a good friend :(  Maybe they'll last just one more summer...
Posted by kreachr at 11:17