MOAR SALAD! GIVE ME ALLLLLL THE SALAD!!!

'tis the season, right?  Not that the weather is really cooperating at the moment...  I thought I'd try something a little different and after checking out a few recipes online, I came up with this one:

Bring water to boil with 1/4 tsp salt.  Add farro and simmer for 20-30 minutes, or until cooked to your desired texture.  While this is cooking, prepare the capsicum, carrot and peas and throw in a bowl.  Heat 1 tbsp oil on medium heat, saute onions for about five minutes until softened and starting to brown.  Add the second tbsp oil and the balsamic vinegar then remove from the heat and set aside to cool slightly.  Once the farro is cooked, drain well then add to the bowl with the vegetables.  Tip in the onions, stir well, and set aside for at least 30 minutes to allow the balsamic to absorb into the farro.  Add the tomatoes and season to taste with salt and pepper just before serving at room temperature (also good chilled).  Serves 2. 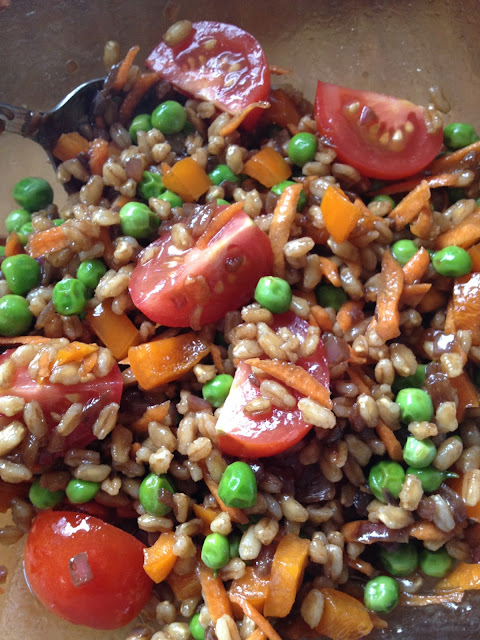 I had to (once again) laugh at myself while preparing the farro salad.  I posted this picture on Instagram: 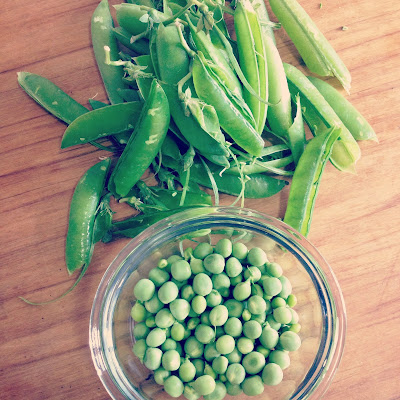 with the comment: 'Fresh peas #omnomnom'.  Growing up, peas were my worst enemy.  The one vegetable that I would always flat out refuse to eat.  Now?  I have absolutely no objections to them, or any other green vegetable.  I didn't eat most green veges - exceptions were lettuce, cabbage, brussels sprouts and occasionally beans - and also hated all forms of salad as a child.  I think that may have a lot to do with the fact that the only salad we ever had was this one, with grated cheese instead of spring onion.  And the salad dressing?  Yuck!!  I hated that salad dressing then, and I hate it now.  My parents still have this salad and dressing every summer.  I blame dad for that.  Sorry mum ;)

It hasn't really been salad weather this week with cooler temperatures and a lot of rain.  I'm certainly not complaining, for several reasons.

Reason #1:  This has been good for the Oatmeal Trials.  I made chocolate zucchini baked oatmeal: 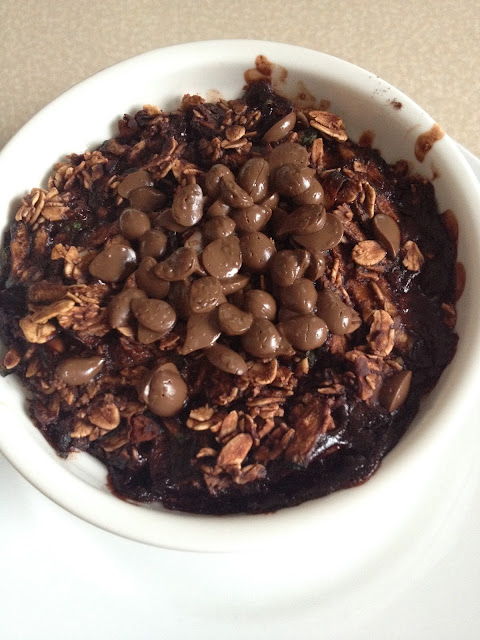 You can't even tell there's zucchini in there, can you?  Mmmm, chocolate...  Mine turned out quite dark, most likely because I used dutch process cocoa.  It was really good.  I had some grated zucchini left over, so this morning I made morning glory oatmeal using steel cut oats (yes I bought some more): 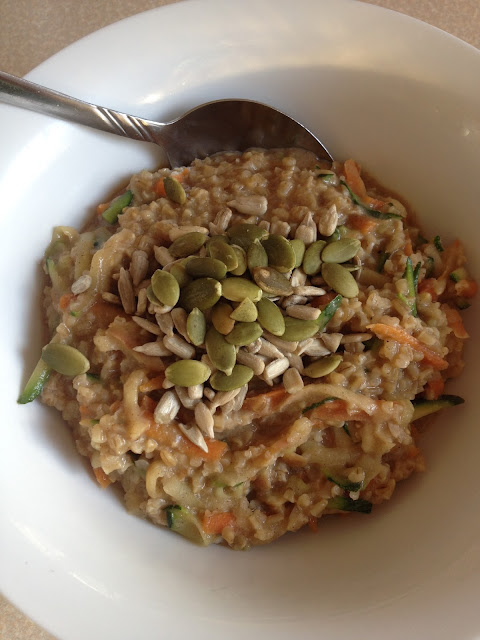 I'm not sure if it was due to increased expectation because of the awesomeness of the previous day's oatmeal, the use of steel cut oats, or the lack of sweetener aside from the 1/8 tsp of molasses (which isn't really all that sweet anyway), but I found this underwhelming.  Perhaps I was expecting something more reminiscent of a morning glory muffin?  Who could say?  I wasn't particularly hungry at the time and had to make myself eat it.  Why was I making myself eat something if I wasn't hungry?  Because I'd shot out the door at 5.30am for another 11km run and had already showered, dressed, dried my hair and had a cup of tea.  I figured it was about time I ate something.  You know, muscle recovery and all that.

Reason #2:  Patchwork.  Christmas is fast approaching, and I'm running out of time to make the kids their new stockings.  A large chunk of the last couple of days have been spent cutting and sewing fabrics: 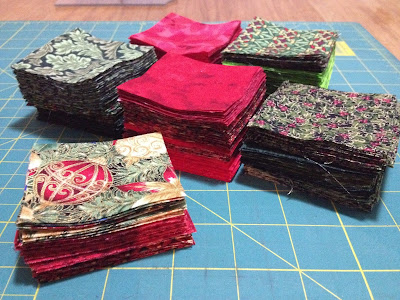 Red and green fabrics for the boys' stockings 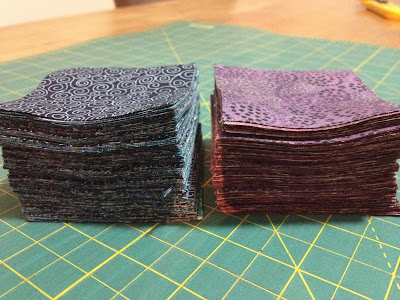 Purple and blue-green fabrics for my niece's stocking

Over seven hundred 2.5" squares.  That took a while...  I've managed to sew together four of these panels: 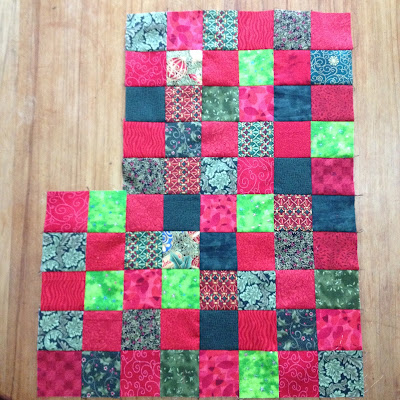 I have another four to go before I can cut out the stocking shapes, and a trip to a fabric store is needed this weekend to get some white fabric for the cuffs.  I'm planning on having the first initial of each child monogrammed onto the cuff of their stocking, which I think will look pretty awesome.  Hopefully they'll look a little like these ones, although I'm not going to quilt mine.  I'm just using the patchwork outer and a lining (loosely following this pattern).  The initials will also help avoid confusion over which stocking belongs to whom.

Reason #3:  X's athletics day has been postponed, which made me feel a little less bad about having to take him out of school for allergy tests.  He was worried he'd miss all the races.  Poor kid, he's had a rough week!  On Wednesday he had three teeth out - baby teeth that were refusing to let go, despite the adult teeth trying to take up residence: 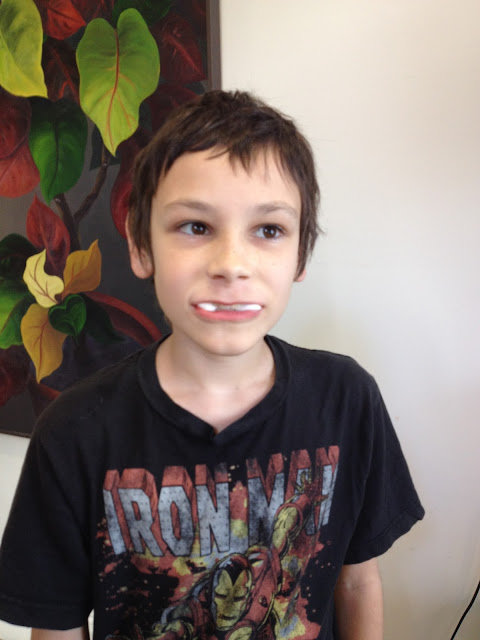 At the dentist after having the teeth pulled, mouth full of wadding to stop the bleeding

Then skin prick tests at the lab, checking for inhalant allergies: 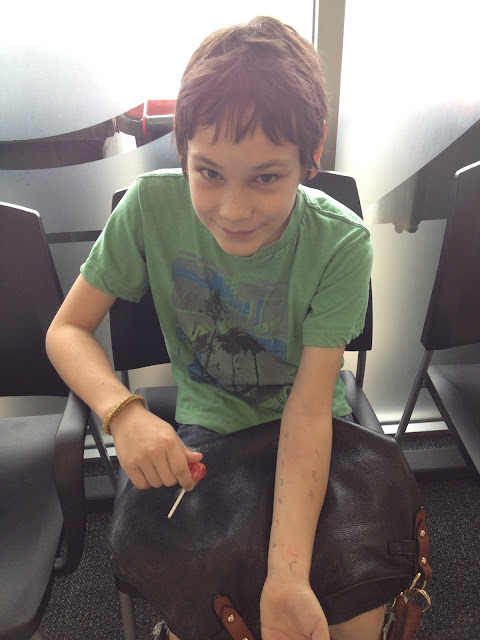 Turns out he's allergic to dust mites, cats, dogs, three grasses, and one type of mold.  He's a trooper though, and dealt with it all pretty well.  It's been an expensive couple of weeks.  Fun times ahead!

Reason #4:  The knowledge that today was going to be another wet one was motivation enough to get me out of bed bright and early for a run this morning, before the rain arrived.  Once again, I couldn't help myself, and took a few sunrise pics: 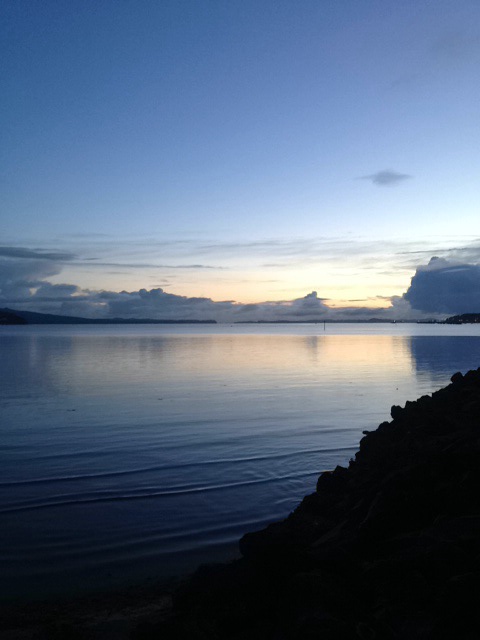 Look at that water, smooth as glass.  I was a little too early this morning though, and the best sunrise colours were popping up just as I was getting home.

I'm looking forward to this weekend - I've been invited by a friend to join him and a group of his running buddies on Sunday for a 14.5km loop run taking in Mount Eden and One Tree Hill (yep, gonna have to run up that sucker twice in one week!) starting at 7.30am.  Should be fun!  This means I'll have to skip ParkRun again tomorrow, but there's always next weekend :)
Posted by kreachr at 16:53