Yeah, it's been a bit quiet around here.  With no running, no knitting, and very little fancy cooking going on, there's not a lot to report.  I spent a couple of days during the week writing an assignment.  Well, more like one day, and about an hour the next day tidying it up and submitting it.  I'm pretty sure that was my quickest assignment ever!  Another day and a half was spent looking after a kid with a tummy bug - that always keeps you on your toes!  Then I spent most of yesterday at the mall getting 90% of the Christmas shopping done.  I love how you can go to one location and get all your shopping done within the space of a few hours.  Carrying the bags does get a little tiresome, but at least the car park isn't too far away so you can offload occasionally.

The first Hillary Trail run is scheduled for next Sunday.  I'm really excited about it, but am quite concerned that a) my injury won't have healed enough by then, and b) I'll be so unfit due to the lack of running since the 19th November (it feels like that was at least a month ago, but its only been a little over two weeks!) that I won't be able to keep up.  I mean, really.  What kind of moron goes from zero running per week to 22.5km on some seriously hilly native bush trails?  Um, me apparently...

I'm trying to shove those thoughts to the back of my mind though, and focus on the positives.  I've been looking forward to this run for quite some time, as I keep mentioning.  (I should probably shut up about that.)  I have all the requisite gear ready to go: 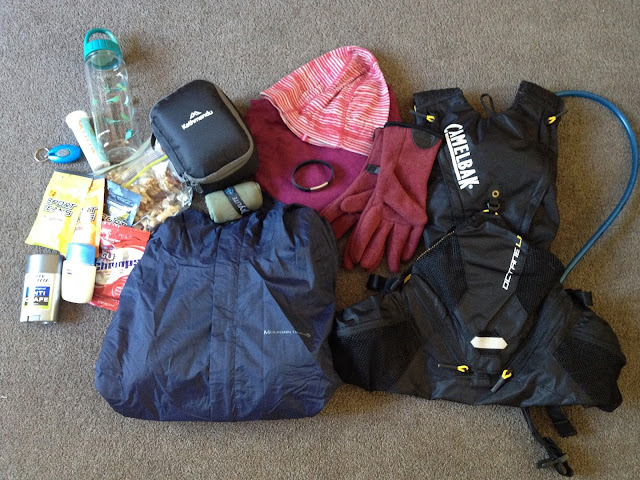 The first aid kit wouldn't fit in the pack as it was, so I had to take everything out and shove it in where it fit.  It contains steri-strips, crepe bandage, lots of plasters, antiseptic pain relief cream, alcohol swabs, medical tape, latex gloves, emergency blanket, cotton balls, cotton buds, ibuprofen... I think that's it.  Kind of wish I had a really good pocket knife with a pair of scissors - I'll put it on the wish list ;)  The pack is ready to go, I just need to fill the bladder on run day and print the map.  I'm sure I can find somewhere to fit that in...  Not sure how useful it'll be since I'm directionally challenged at the best of times and wouldn't have a clue which way is north unless somebody points me the right way.  My plan of attack is to just work really hard at not getting lost and staying within sight of running buddies.  Do you think I'm well enough prepared? ;)

With the lack of running also comes the lack of sunrises.  I don't really get much of a view from my house, situated in a valley.  But boy, did we have some beautiful sunsets this week?!?  I got a few pics from outside my house the other day: 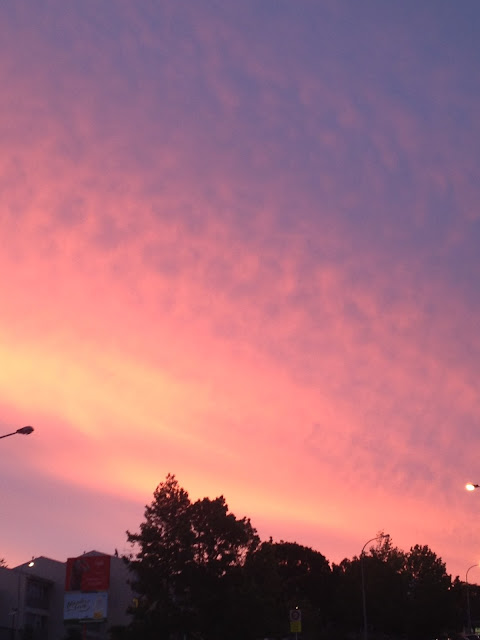 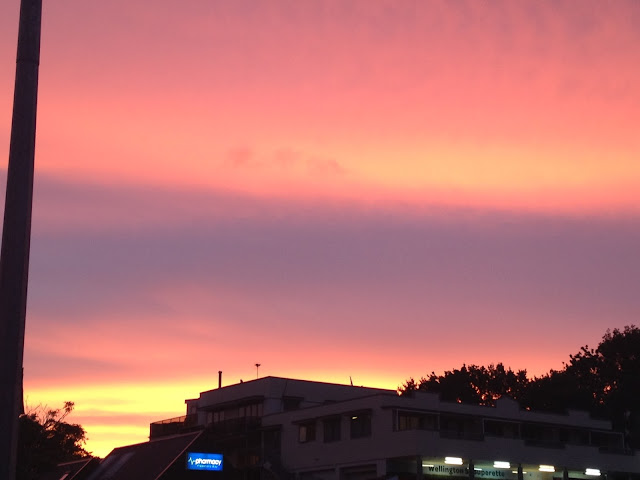 Please excuse the not-so-pretty buildings and street lights.  The view would've been way better from the roof, but there's no easy way to get up there.  Oh well...

And now, because there's no smooth-flowing way of moving from sunsets to food, I'm just going to completely change the subject (I'm really good at that - I confuse the crap out of people during conversations fairly regularly).  We got nectarines in our Foodbox this week, which made me very happy.  I ate one straight away because they are just fantastic, but the rest I made into breakfasts.  First up, we have caramelised nectarines on cinnamon vanilla oatmeal: 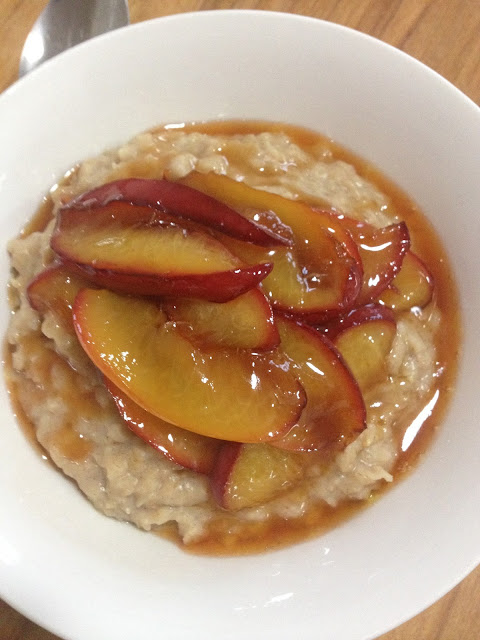 Then we have this beauty: 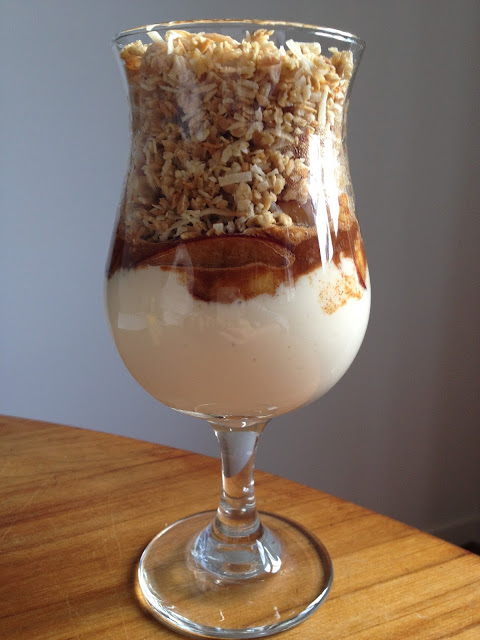 I used the peaches and cream yogurt breakfast recipe from Veggieful, but used nectarines instead.  They're basically peaches without the fuzz anyway, right?  I was a little dubious about the tofu yogurt.  As much as I like tofu in savoury dishes and disguised in sweet stuff (such as these amazing brownies, or smoothies) I wasn't entirely sure how it would do as a main ingredient.  Turns out, it's pretty alright.  By the way, it looks like there's a lot more granola than there actually is - the glass narrows quite a bit at the top.  I was stuffed after eating this, and I have enough for breakfast again tomorrow.  Yum!  I didn't try to foist the vegan breakfast on Deane, instead he got this: 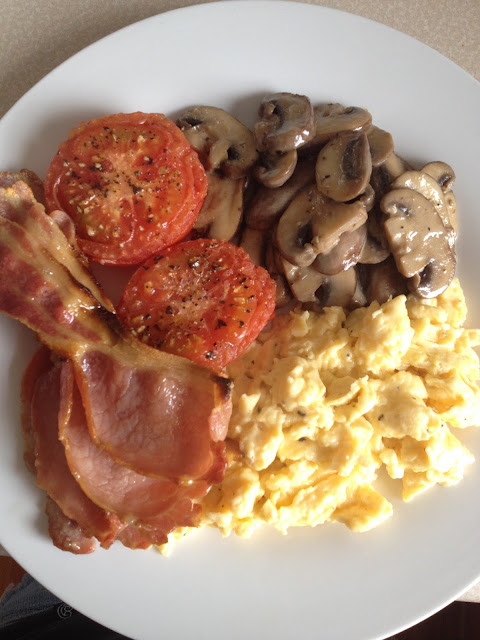 I even took it up to him in bed along with an espresso.  My word, that man is lucky to have me... ;)

So you see, I haven't been completely lacklustre in the kitchen.  I even made some spicy kale and red lentil soup: 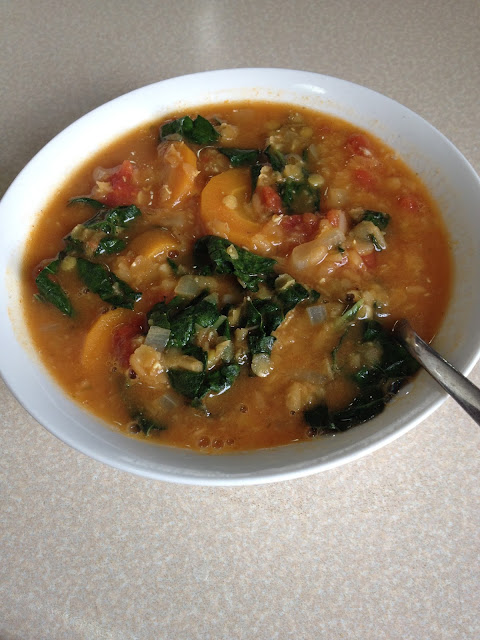 I used a slightly different recipe to the last time I made it - this one had chili powder and cayenne pepper in it.  I used half the amount of chili stated in the recipe, but its still got plenty of kick.  Also, I didn't have any celery so just sliced up a carrot instead.  I prefer carrot anyway.  This was dinner for me two nights in a row, and there's another two servings in the freezer.  Awesome :)

Tonight is T's birthday sleepover, so the boys are having Sal's again (no surprises there).  I've made a giant bowl of salad for myself, and I think I'll make some baba ganoush to go with.  For now though, it's time to ice and decorate the chocolate cake before the extras arrive.  Enjoy your weekend!  I hope you have good weather, ours has been shit all week (not that I'm complaining, especially since I can't run anyway)...
Posted by kreachr at 13:31