I have finished my Christmas shopping!  I even have stocking stuffers, yay!  Next week will be the baking - I have all the supplies ready to go.  Feeling all organised and super virtuous right now.  I've done all the study I can, and am at a sticking point - I have to wait until our compulsory group activity is completed on the 23rd December before I can begin my second assignment.  Unfortunately, this means I only have between the 23rd December and 5th January to complete it, so I'll have to take all my study gear with me to Napier and work at it over Christmas/New Years.  Poop.  It isn't actually due until the 16th January, but we will be heading to Fiji on the 6th and there is absolutely no way I am working on an assignment instead of soaking up the sun on the beaches!  I am ridiculously excited about this trip - I've been wanting to experience the slow-moving, relaxed atmosphere of a tropical island holiday for a very long time.  It's not really Deane's cup of tea so I think he's avoided it before now, opting for slightly more action-packed adventures (snowboarding, zip-lining, theme parks, etc) but he's been getting into free diving of late and Fiji is well known for its beautiful coral reefs so I think he'll be happy :)  He's even entertaining the idea of completing a PADI dive course while we're there.  For me, it's the thought of white sand beaches, crystal clear waters, snorkeling around coral reefs, hiking through rain forests with beautiful bird life and waterfalls ... oh, it's going to be amazing.  I've been spending a fair amount of time researching things to do, places to stay, and the areas that are safe for running.  We're spending half our holiday on a tiny little island northeast of Viti Levu called Naigani, which is in the Lomaiviti group of islands: 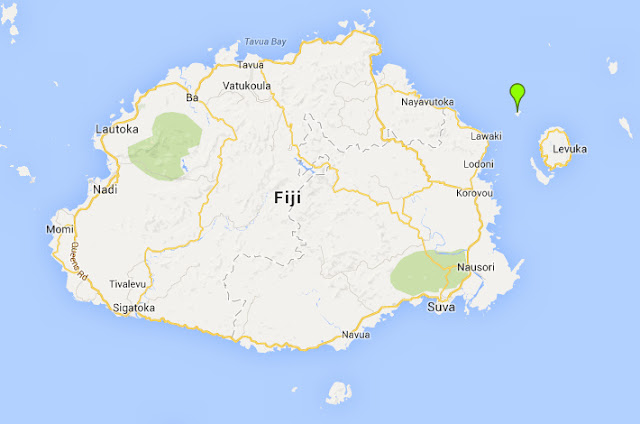 See the little white dot where the green marker is pointing?  That's Naigani.  There's only one resort on the island, no shops or restaurants, and very few tourists.  There's a coral reef within 50 metres of the shoreline, a cannibal cave (that should be interesting, wonder what the boys will make of it?) and not much in the way of technology.  With wifi being charged at $15 an hour, I think we'll just go off grid for a few days.  I will however have my Kindle fully stocked with books!  I've read that the power on the island is run by generator and it gets turned off between 2pm and 5pm, and again between 2am and 5am.  Fun times ;)  Maybe we should stock up on candles and matches before we leave Suva.  Not to mention snacks for the kids...

It's going to be pretty warm (around 30ish) and probably a bit on the rainy side, but it'll be nice to get the boys away from home and seeing a bit more of the world.  A part of the world that doesn't involve a TV or computer screen!  There's not really anywhere to run on this island, nor is there a gym.  I'm okay with that.  I think walking, swimming, kayaking and snorkeling should take care of the physical exercise while we're there ;)

We're currently debating where to spend the other half of the holiday, and what type of accommodation we'll go for.  I'm leaning towards Suva at this stage.  With things like the Fiji Museum, Colo I Suva Forest Park, Thurston Gardens, and places like the Sigatoka sand dunes less than two hours drive away, there's plenty to keep us occupied.  I'd love to be able to go to Taveuni and check out the Bouma National Heritage Park which has the Tavoro Waterfalls and the Lavena Coastal Walk, but I think that since we'll have the boys with us, it'll be easier to stay in a slightly more centralised area.  We've got the out-of-the-way place covered with Naigani, so Suva should cover some of the other aspects of Fiji life (heavy tourism, lots of people, shopping, restaurants etc etc).  My two choices for accommodation while we're there are Raintree Lodge (we'd opt for a family bure) and Five Princes Hotel (twice the price, but rather lovely - we can get adjoining rooms so the kids won't be far away).  Decisions, decisions...

Anybody been to Fiji?  Got any tips?  Recommendations?  Fling them my way :)

In other news, my adductor strain is slowly getting better.  I can't say for sure whether it'll be completely pain-free in time for Sunday's trail run, but as I've said before I'm not going to miss it.  I'll have plenty of time to rest it afterwards in any case.

I've tried out a couple more oatmeal recipes this week: 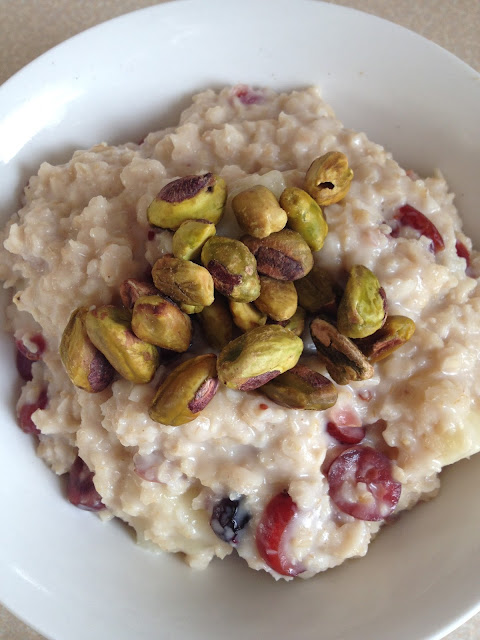 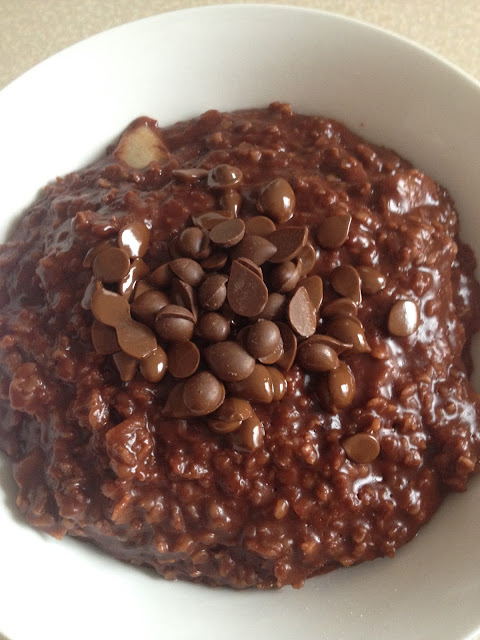 Chocolate pear oatmeal - I made this one up, using one peeled and chopped pear, 1 1/2 tbsp dutch cocoa powder, 1 1/2 tbsp agave syrup and 1/2 tsp vanilla extract, with a sprinkling of chocolate chips

I've also been playing restaurateur for Deane, making him breakfast every morning.  Yesterday he had a spinach and mushroom mini pancake stack: 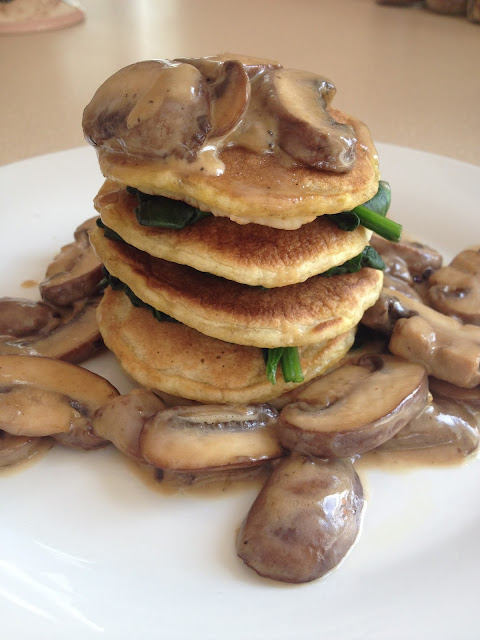 And this morning it was scrambled eggs with salami and tomato: 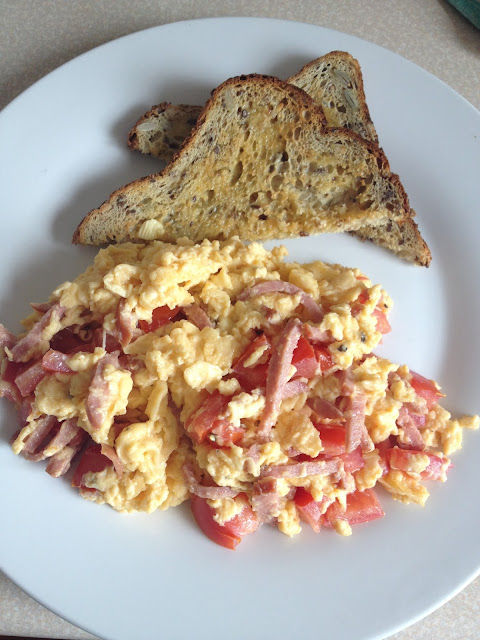 The boys have no real interest in swanky breakfasts - X opts for a chocolate smoothie or bagels, and T's usual choice at the moment is rice bubbles with milo or poached eggs (no toast).  Boring.  X will occasionally try one of my oatmeal creations, but nothing too 'weird' ;)

I've been rather lazy about dinners of late, mostly due to the fact that we had an abundance of Sal's pepperoni pizza left over from T's birthday sleepover on Saturday.  The boys finally polished off the last of that yesterday so I can actually cook something decent for dinner tonight.  This is rather important right now, as I have basically existed on lollies and peanut butter sandwiches for the last few days.  Quite appalling when you think about it...  I will say that I've also eaten a decent amount of salad, so that kinda balances it out a bit.  (Not really).  I appear to have developed a bit of an addiction to peanut butter on whole grain - more specifically, Pic's peanut butter and Burgen pumpkin seed and chia toast sliced bread (they really need to update their website...)  Although packed full of healthy vitamins and minerals, this is not going to help me look good in a bikini while traipsing around on the beach!  I have gained an extra wobbly layer in the few weeks of inactivity and poor eating habits.  Damn you, simple carbs!!!  Why must you be so deliciously enticing?!?  And you, stupid injury!  How dare you interrupt my healthy active lifestyle with your annoying stubbornness?  (None of this is my fault at all, nope nope nope.  It's all the fault of food and injuries.  All of it!)

The boys are winding down at school now - they've entered the sports activities and Christmas crafts section of the term, which will be filling up the last couple of weeks before school close.  T has his athletics day on Thursday, then next week there's X's leaving ceremony, secret santa and shared lunch, and both boys get to spend a day at Point Erin Pool.  Friday is only a half day and it seems a little pointless, but the school legally has to have a set amount of days in the school year, so a half day on Friday it is!  Then we'll be heading to Napier for Christmas.  I must remember to grab the Christmas pudding out the freezer before we go.  One year I completely forgot to pack the giant Christmas ham, and not only did we have to buy one on arrival in Napier to replace it, Deane and I had to eat an entire giant Christmas ham on our own when we got back!  Not an ideal situation...

I think I'll do what I did last year and write a big list of stuff to pack/remember to put on the fridge.  Lists are awesome.  My memory is appalling.  This system works.

I no longer have an excuse to avoid my housework and laundry since everything else is up to date, so I guess I better get on to that.  Hmm, maybe after a cup of tea...  Enjoy your week :)
Posted by kreachr at 13:57