How the other half lives

So I left off the last post leaving Naigani.  We had a four hour drive around the top of Viti Levu on the King's Road to Nadi.  Once again, I spent the time looking out the window and marveling at the beauty of Fiji - it's so lush and green, and there are flame trees everywhere lending a splash of colour to the landscape.  It was humbling to see how many of the Fijians live - they have little, but are content.  Most dwellings outside the larger city areas are simply one- or two-room buildings with louvre windows and woven mats for flooring. Bathrooms?  Kitchens?  One can only guess.  The exteriors are often painted in bright or pastel colours - pink, yellow, blue, green.  The villagers make their money selling fruit on the roadside - bananas, mangoes, papaya, pineapple, whatever happens to be growing in the surrounding area.  They are often seen walking along the roadside to get where they want to go, or waiting for a bus to come by and pick them up (the buses are frequent, as many Fijians don't own cars).  The roads themselves are a little the worse for wear, and the national speed limit on all open roads is 80kmph (which is why it took so long to get everywhere).  The villages were small but many, and it was easy to see how close-knit their communities were.  Fijians are so happy and friendly, we often got waves from the children as we passed by, or a shouted 'Bula!'.  On the King's Road in particular, we frequently had to slow down for wandering cattle or horses that had made their way onto the road.  It certainly made for an interesting journey!

In stark contrast, the moment we turned into Denarau to head to our accommodation, it was like a whole different world.  Manicured lawns, smooth roads, beautifully landscaped gardens, well-constructed fences and modern buildings.  A tourist haven for sure, but nothing at all like the real Fiji.  All of us agreed, from the outset and many times over the next several days, that the only benefit to this type of accommodation was the air conditioning, and that we would've happily done without if it meant we were back on Naigani.  We missed Naigani - the peace and tranquility; the friendly, personal experience of staying somewhere you could get to know the people around you and call them by name; the natural beauty of the surrounding area that hadn't been man-made.  Sure, the Sheraton Denarau Villas where we stayed was nice, comfortable and modern.  But the place was crawling with tourists (obviously) and although you were greeted with a smile and hello by the staff everywhere you went, it just wasn't... real.  The pools at all the resorts closed at 7pm (seriously!  How ridiculous is that?!?) the food was expensive unless you went outside the resort area (which we did several times) and we got frustrated with all the people - standing around and listening (okay okay, eavesdropping) they were stuck-up, demanding, often complaining about something or other with the accommodation, the service, whatever.  Ugh.

Having said that, we still enjoyed our time in Denarau.  The first day we just explored the resort, swam in the pools, did some shopping, etc.  I got up early and went for a run with a staff member from the Westin Hotel - they have a RunWESTIN program that includes a short or long run.  I forget the guy's name (it started with T), but he was very tall and thin, a rugby player, and a slow runner ;)  He took me for a lap around the golf course, then left me to run another lap on my own.  I guess 4km was enough for him... Or it could've had something to do with my comments on how slow we were running...  I had intended to run with him again, but on Wednesday we had an early start, and on Friday I woke up too late (the run starts at 6.30am).  So for the whole 12 day stay in Fiji, I ran one measly 8km run.  Slack! 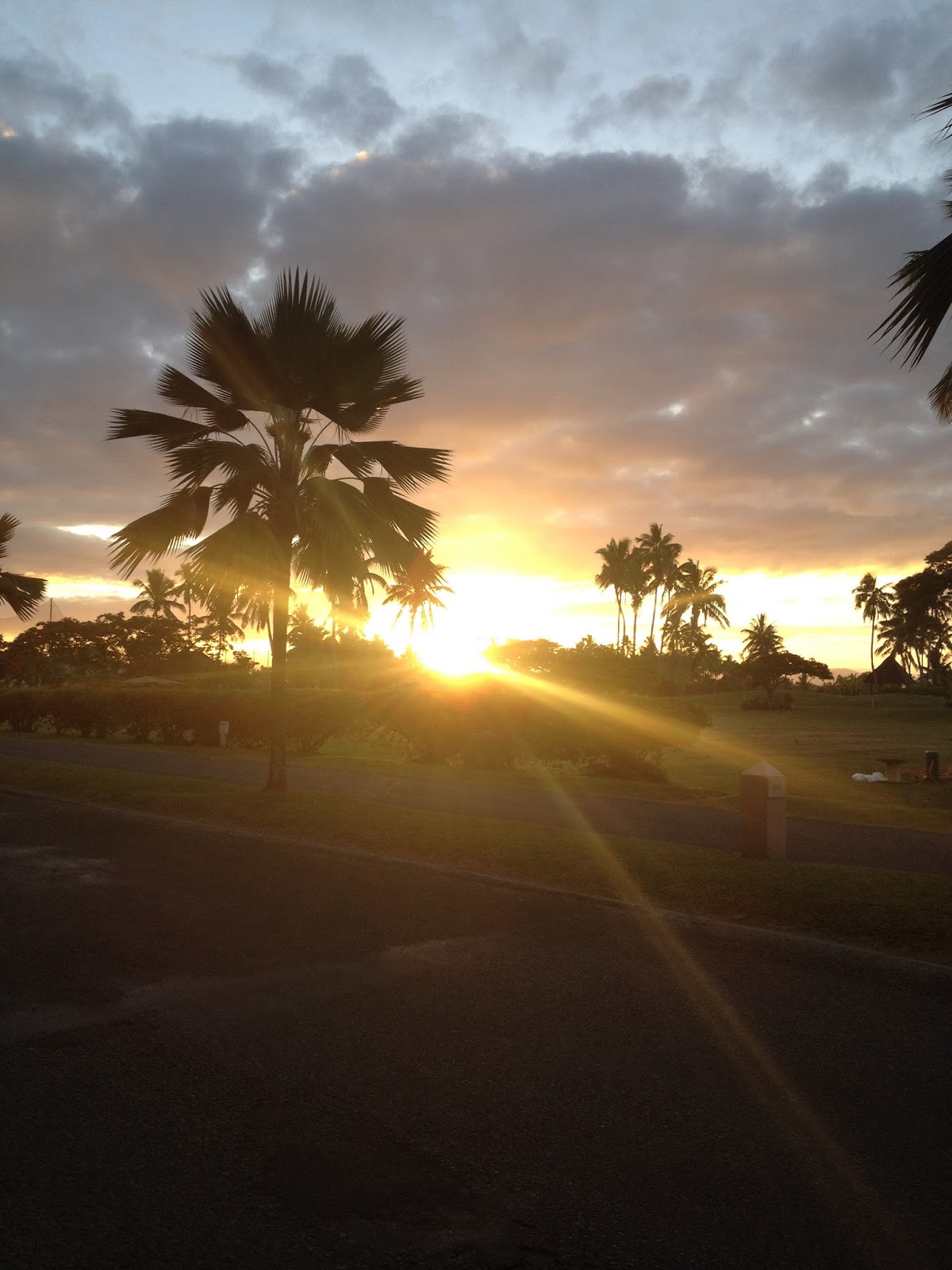 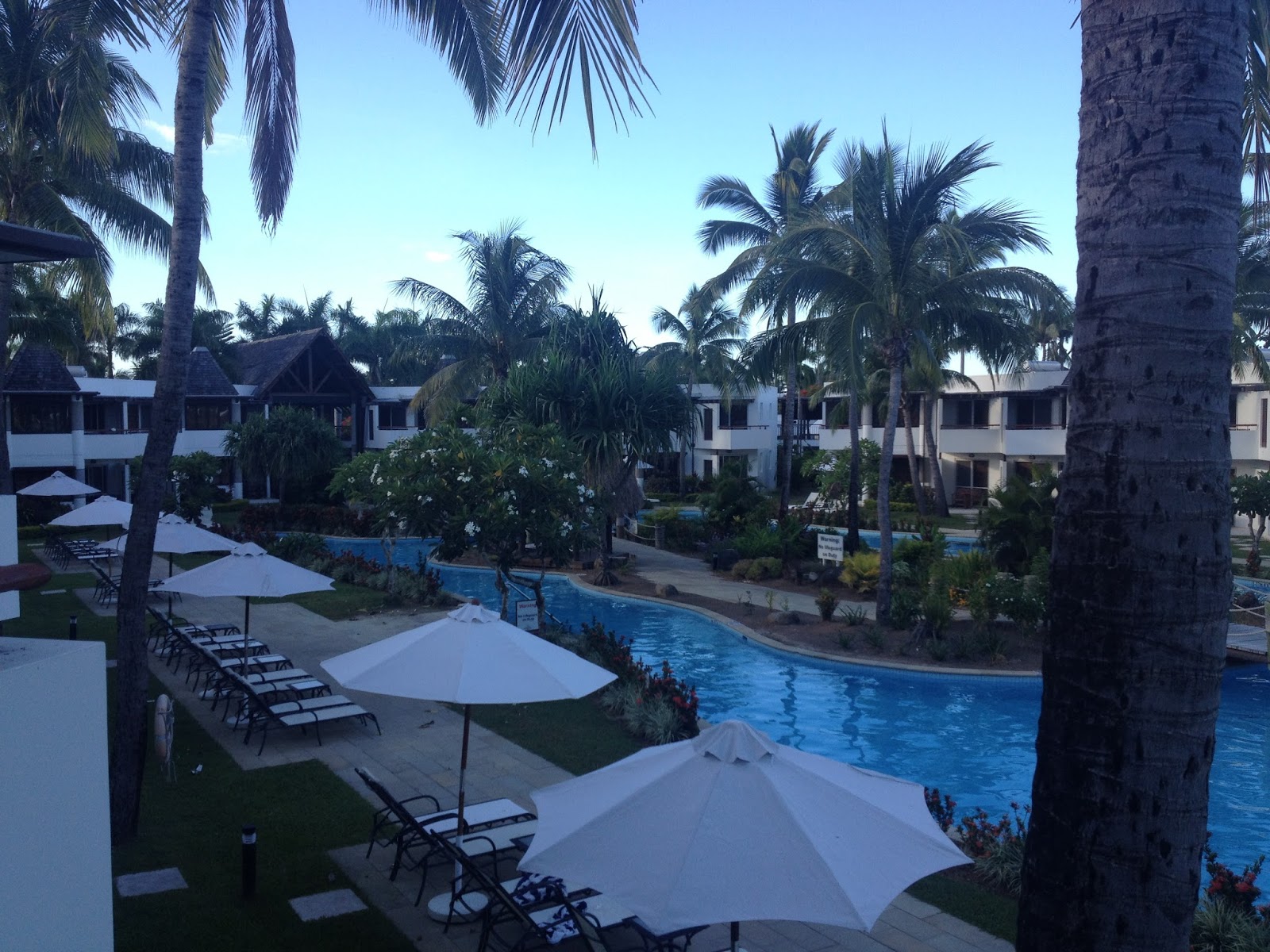 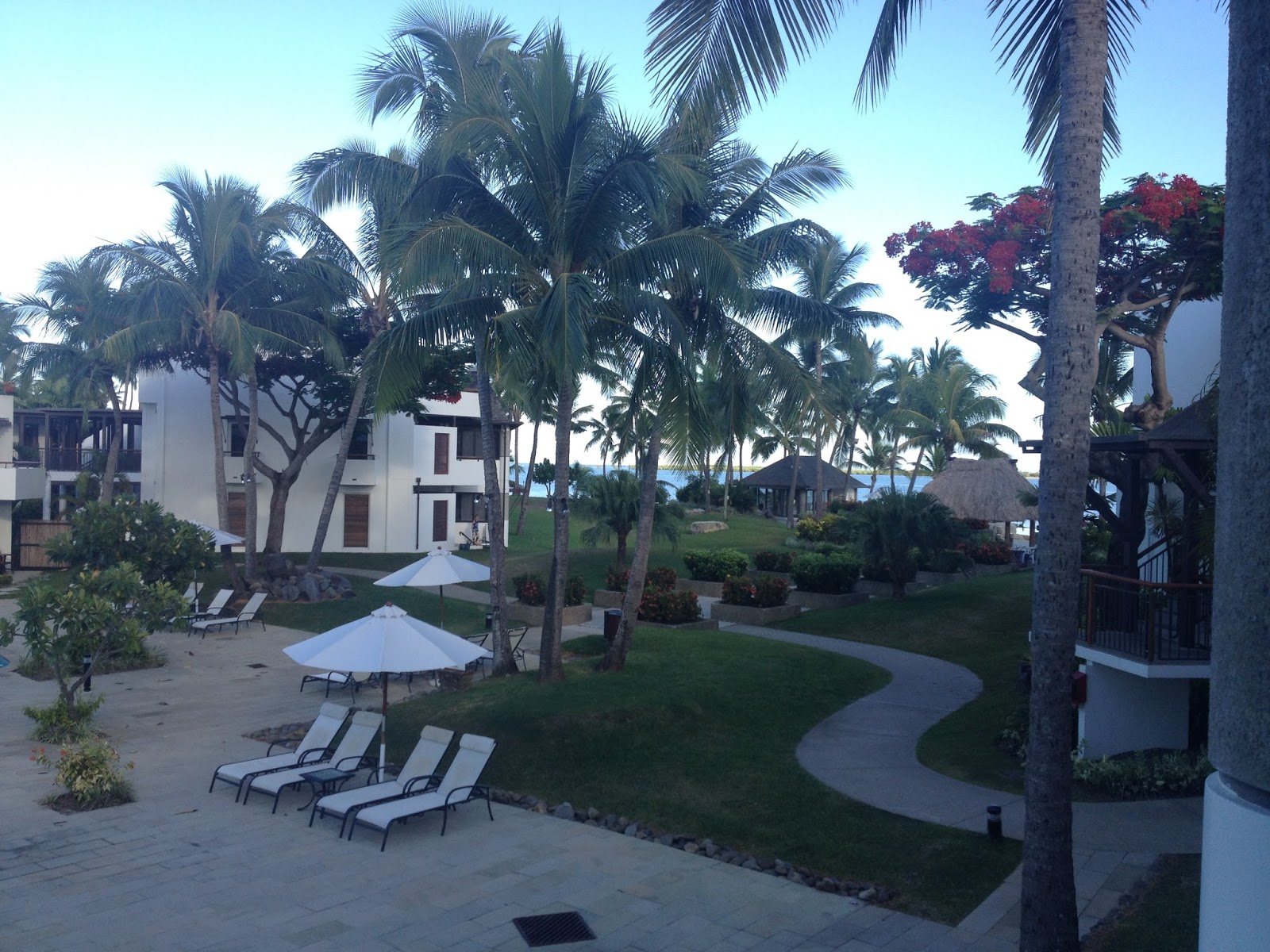 View from our balcony towards the infinity pool and beach 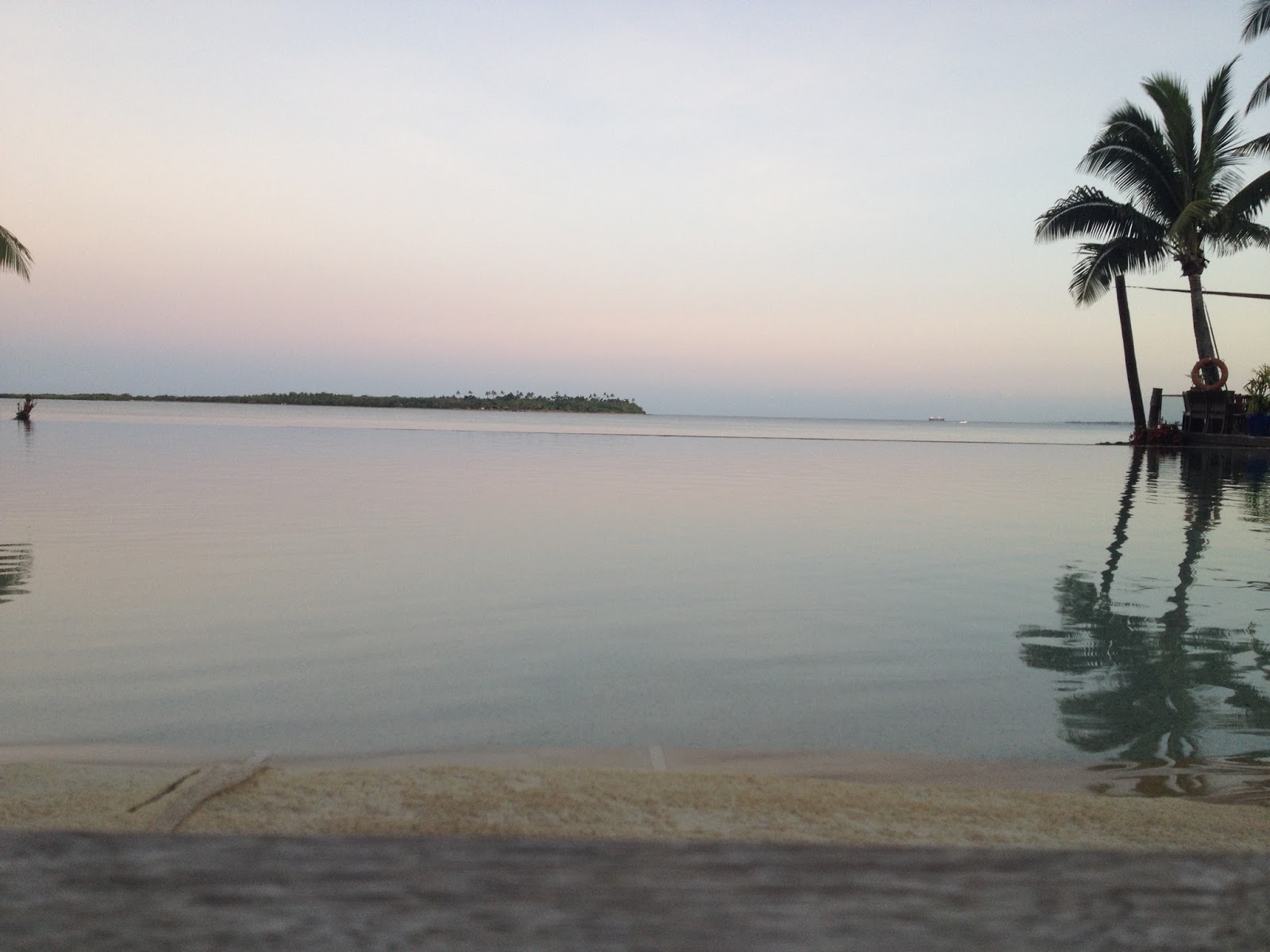 Infinity pool, from the boardwalk - the swim-up bar is on the right

On Tuesday we went for a day trip to Sleeping Giant Zipline - X had a ball of a time.  T (very grudgingly) did one zipline, then spent the rest of the day hanging out with the three resident kittens and a guy called Carlos who taught him how to skip stones on the river.  Ziplining was fun, and we went for a walk through the rain forest with our guide Dean, who taught us a bit about the local plants.  We also got to go swimming in a natural spring pool with a waterfall. 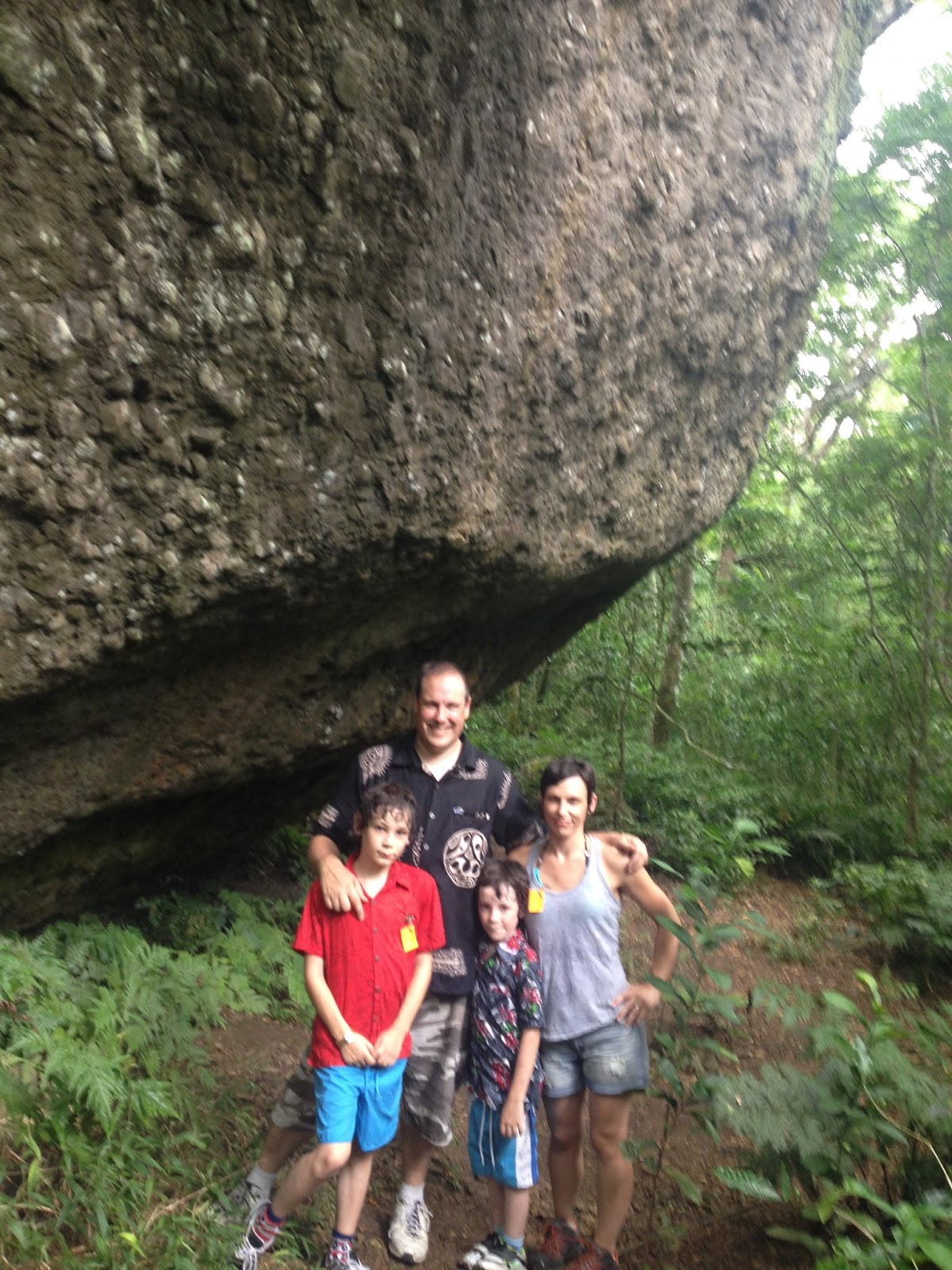 Cannibal rock - slightly blurry because Dean was not very good at taking photos ;) 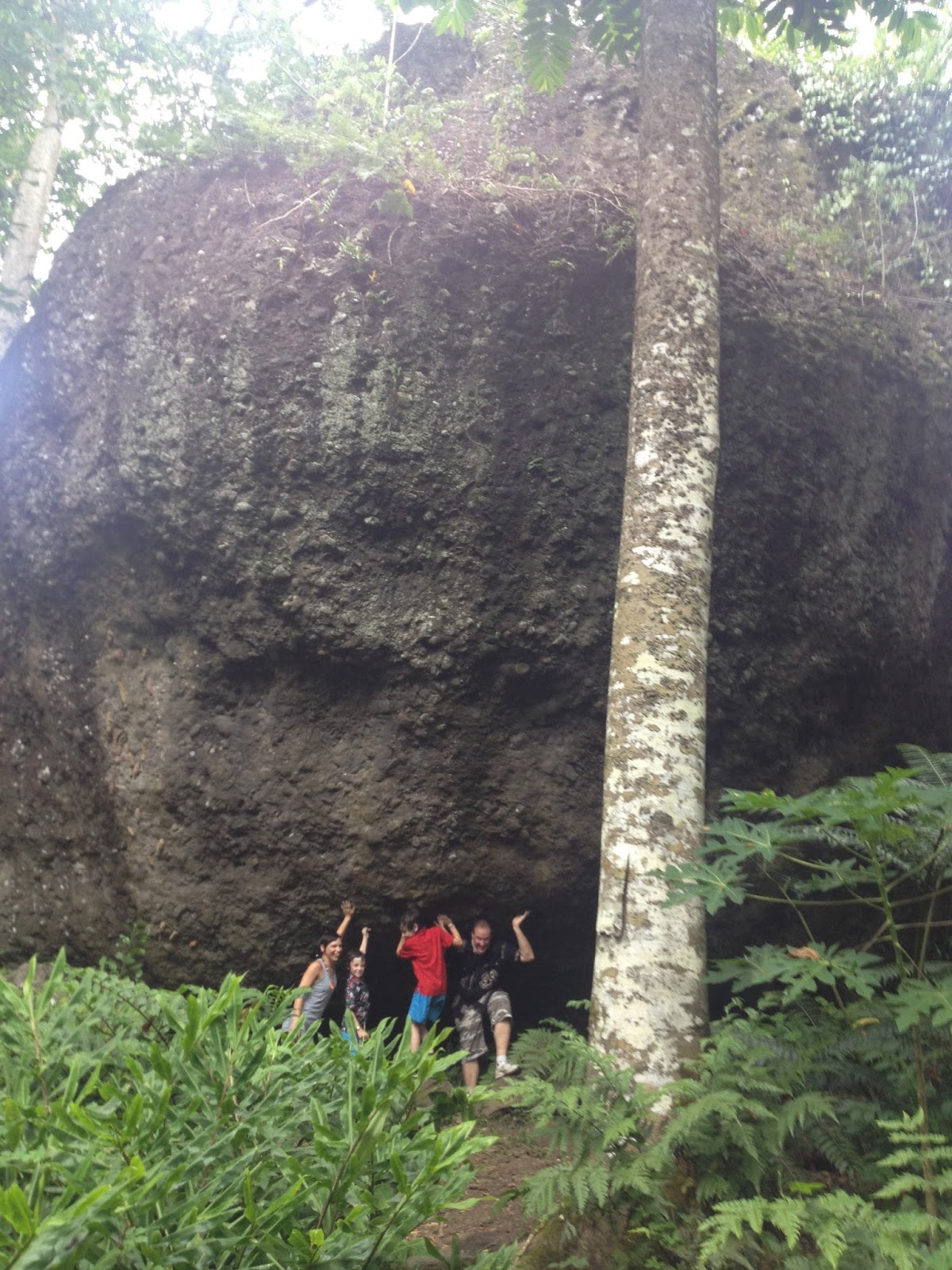 An idea of the size of the rock 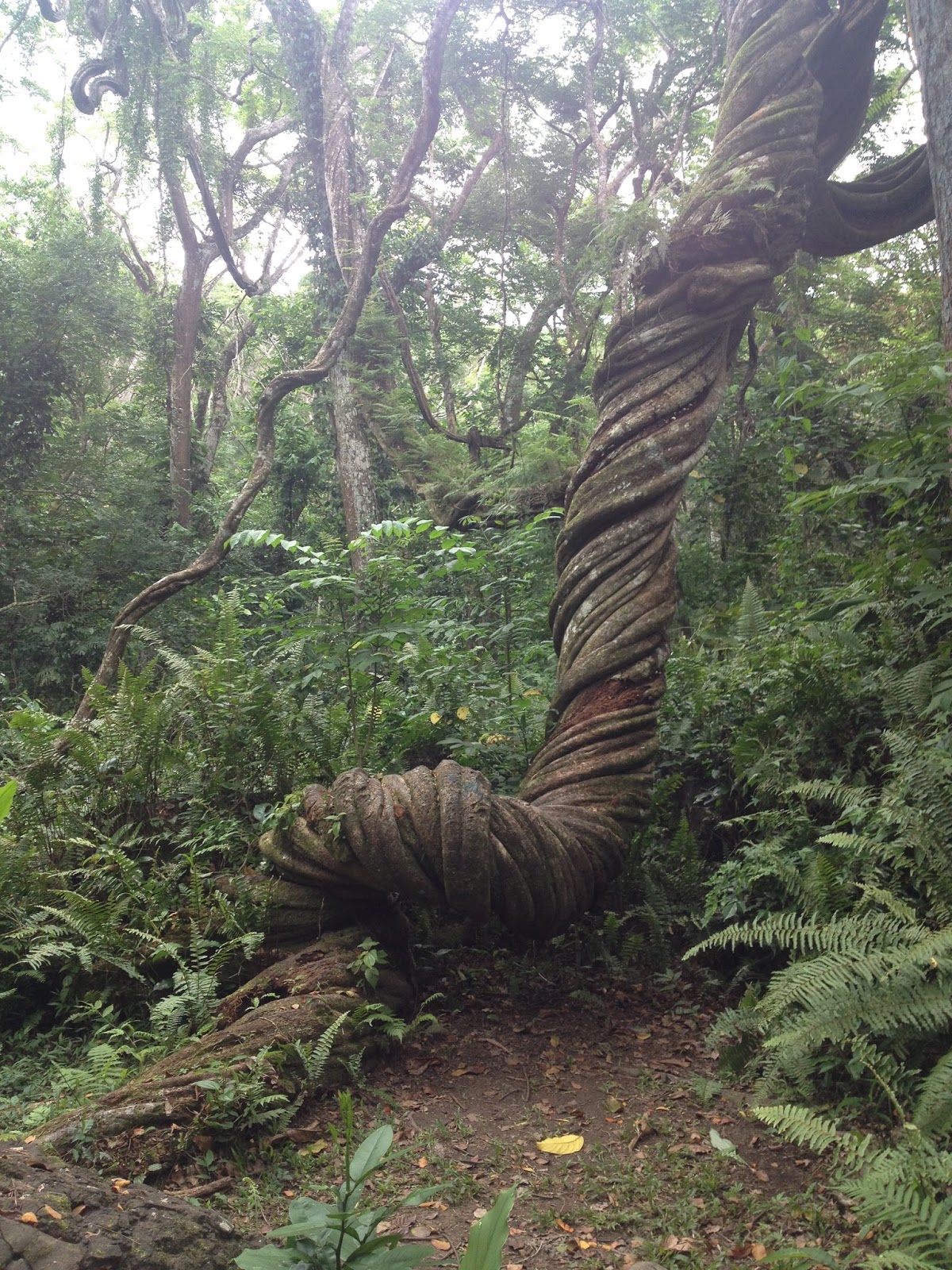 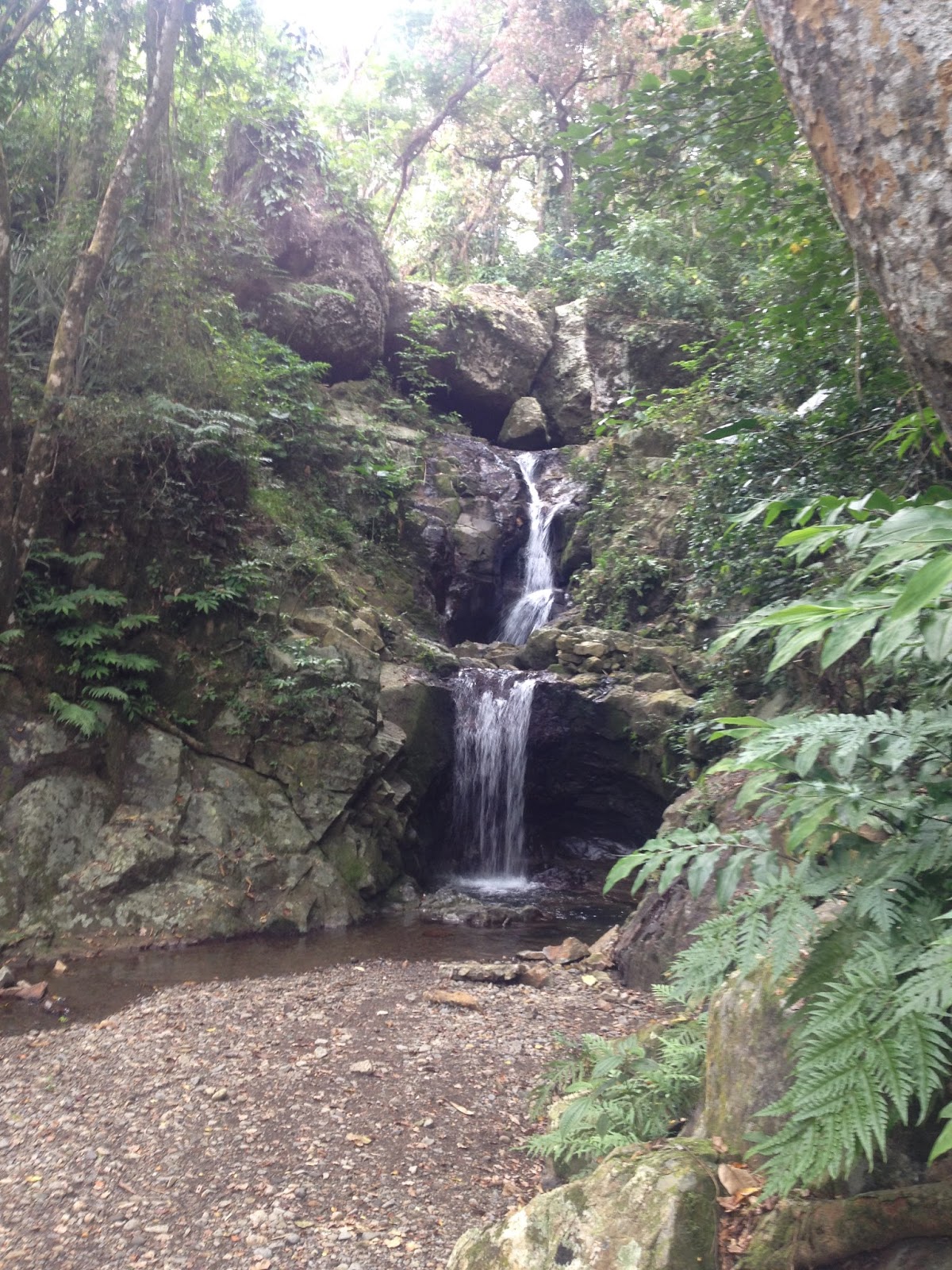 One of the waterfalls - you could sit behind this one 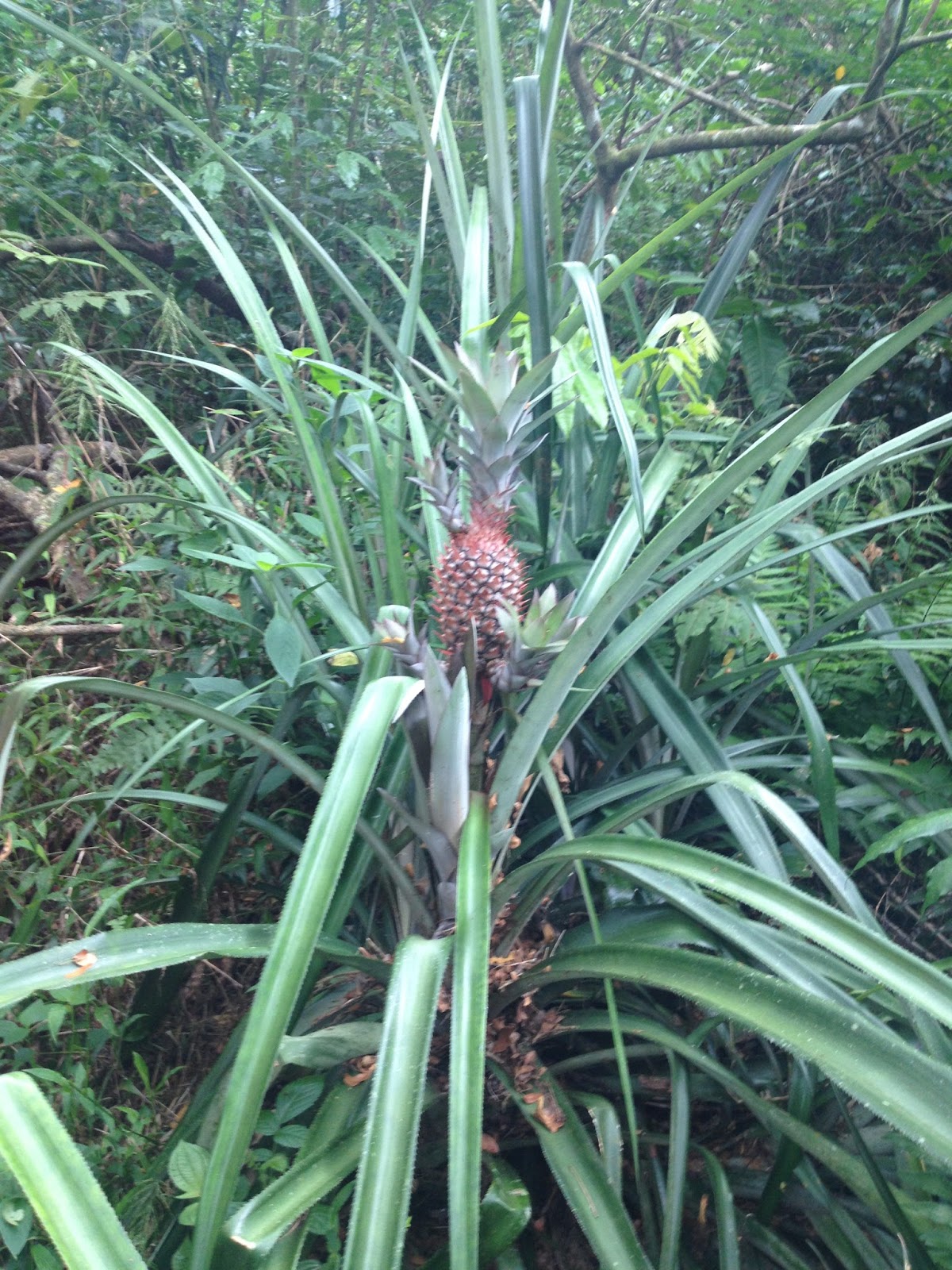 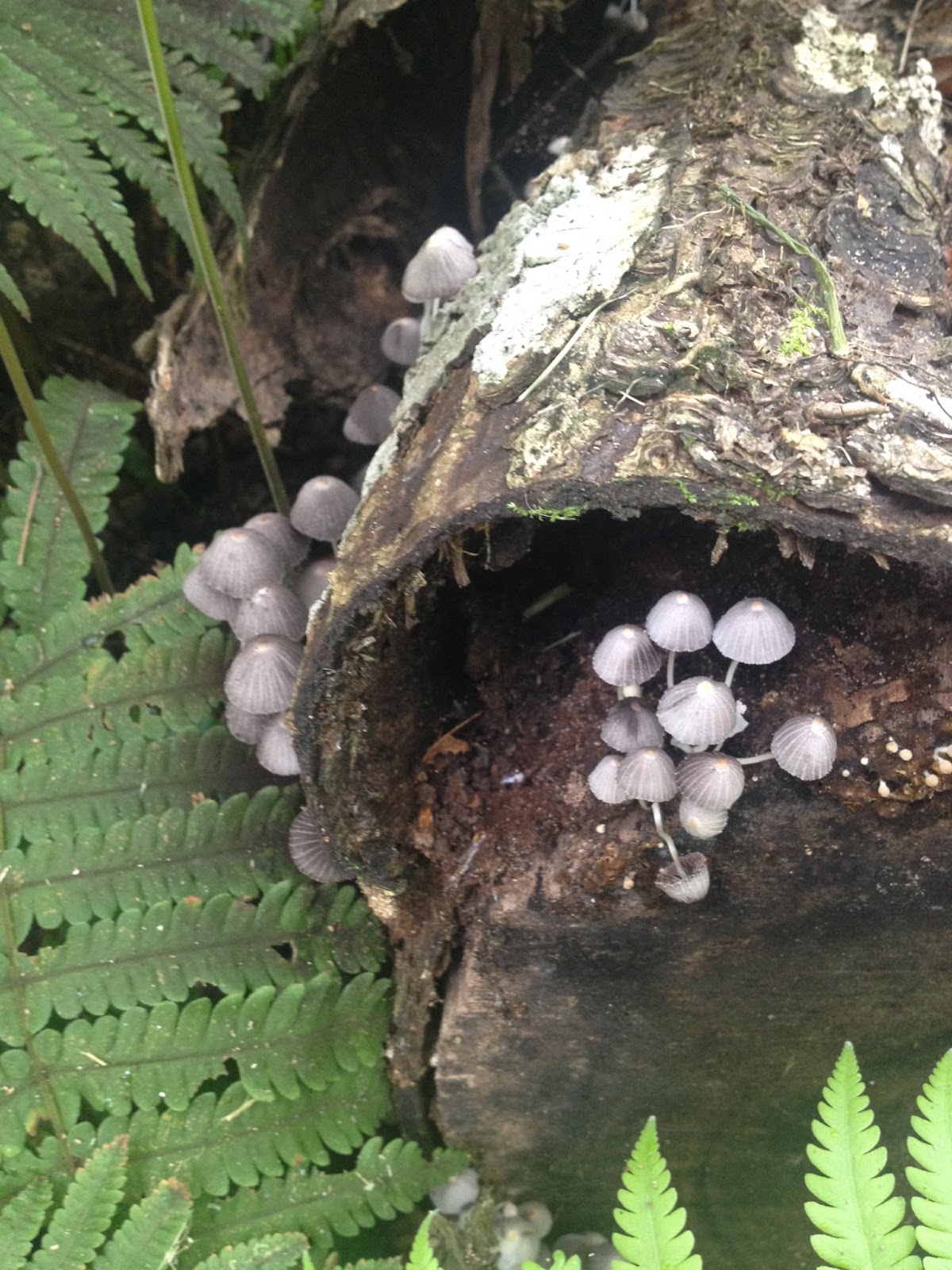 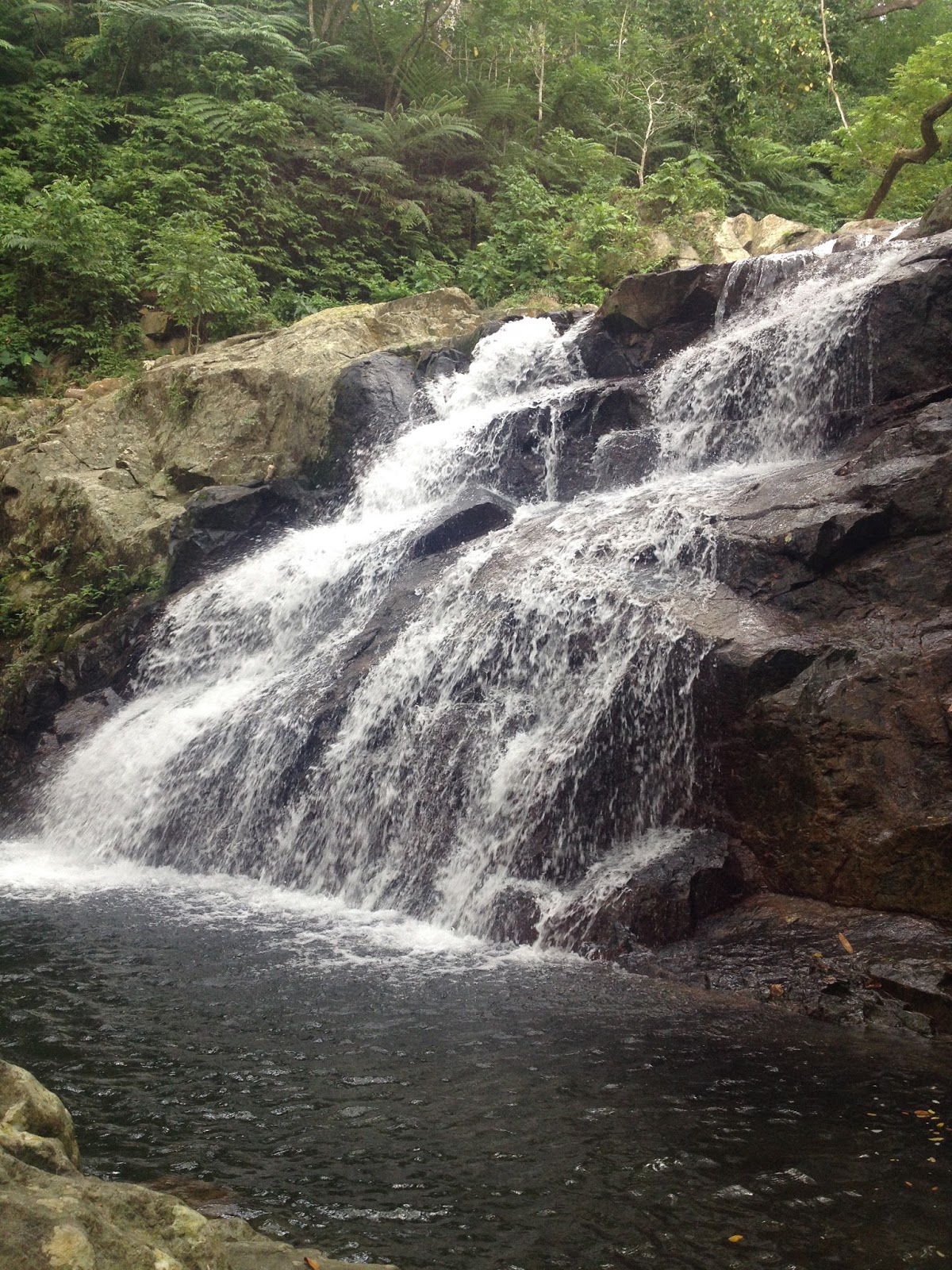 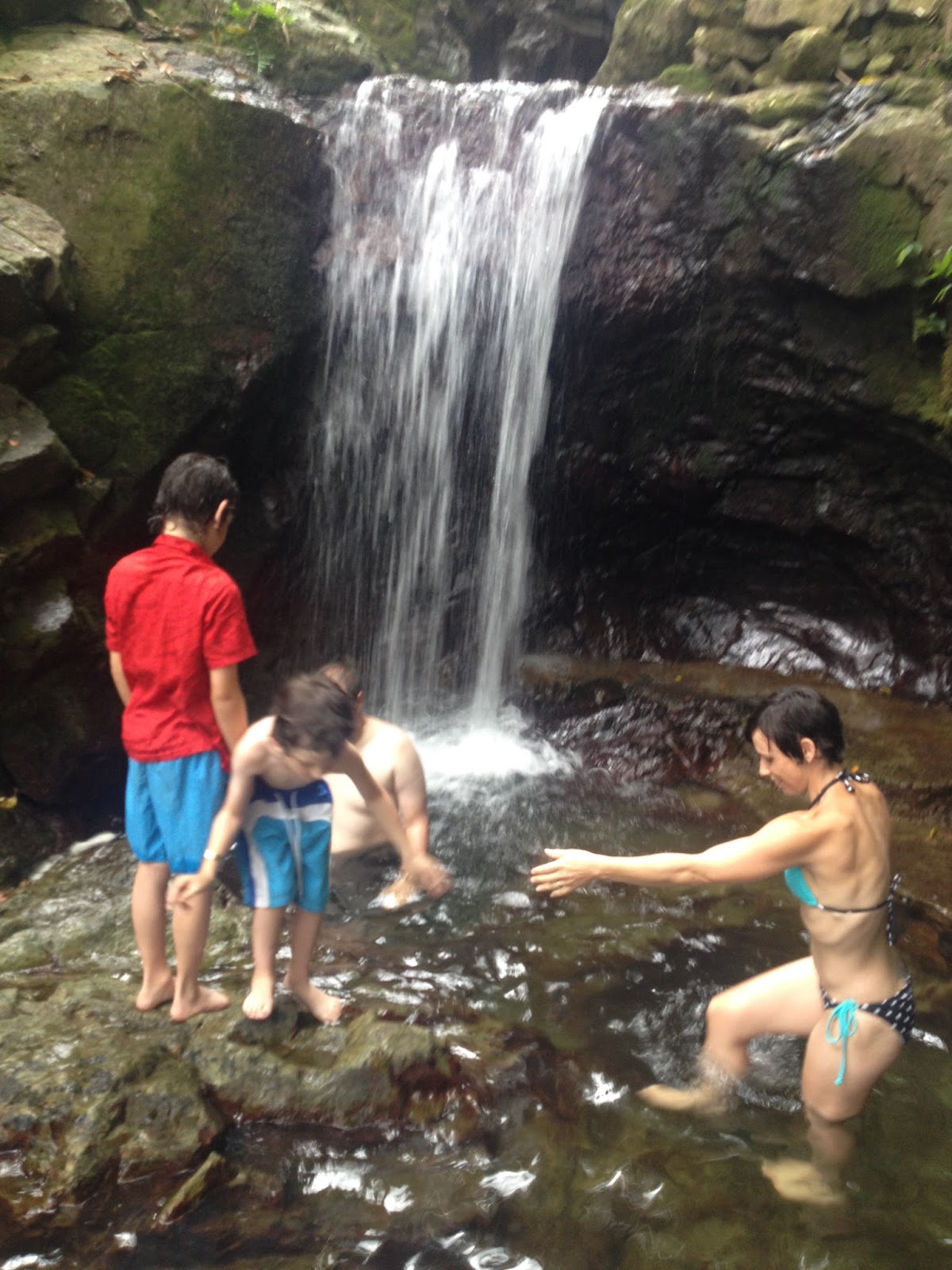 By swimming I mean this is as far in as I got.  It was freezing!!

After our walk we headed back to base and had lunch, then we swam in the river with the koi and rock fish, jumped off the rock, and X and Deane had a go at the natural water slide. 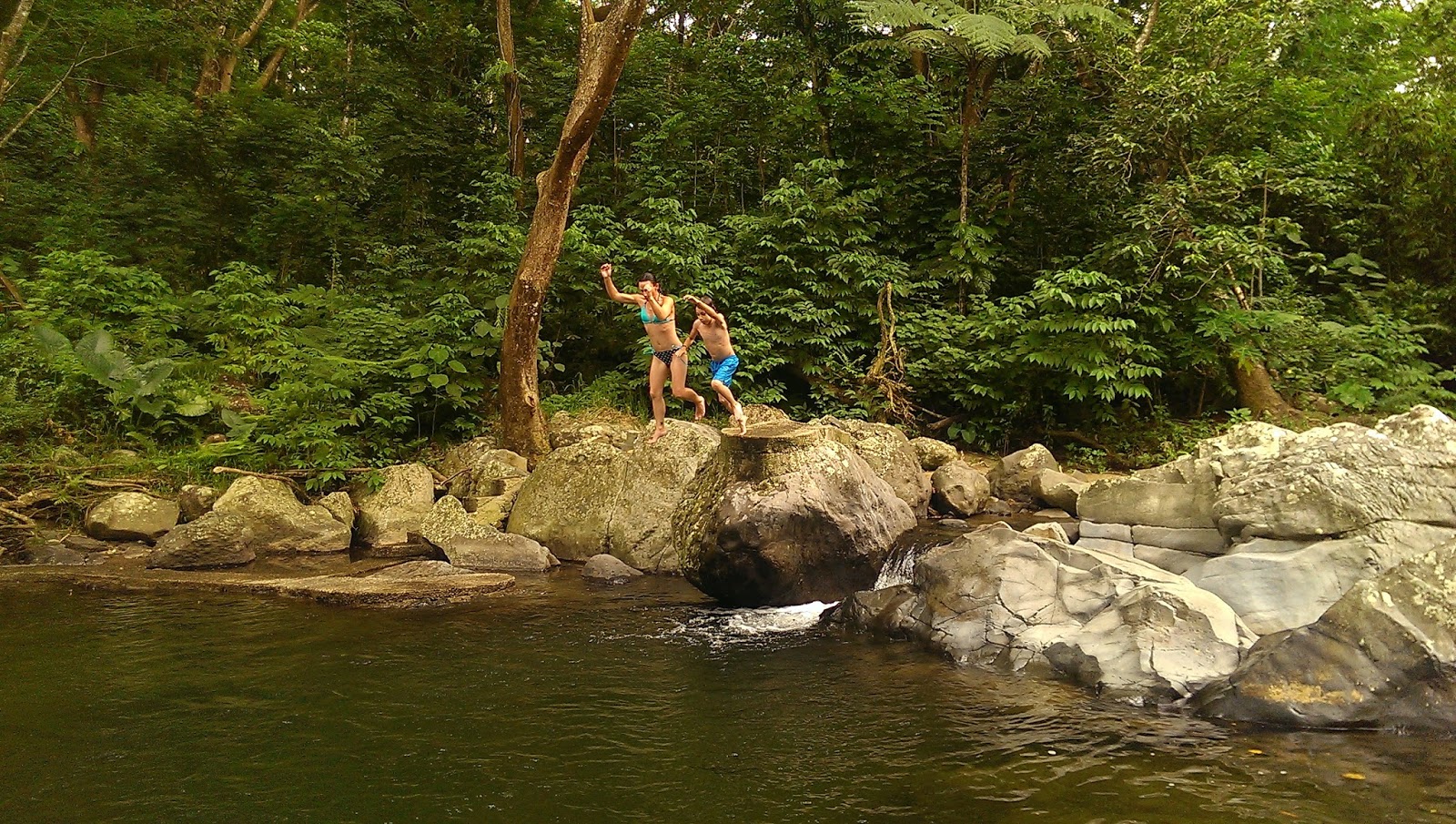 A few more ziplines, then we headed back to the resort for dinner.  The next day was a very early start - we were being picked up from the resort at 6.45am.  Well, we were supposed to be.  The driver was about 15-20 minutes late.  He then spent the next 3 1/4 hours making up for the deficit by driving at about 100kmph (remember the speed limit was 80).  He got pulled over by the police, was (we assume) given a ticket for speeding, then proceeded to drive even faster to get to the Navua River base on time.  We didn't really mind, but there were some rather dodgy passing manoeuvres (passing on blind corners and honking at the oncoming drivers to get out of the way, for example).  By the time we got to base, it had started raining and continued to do so throughout the day - the first day of rain we'd had.  Considering it's supposed to be the 'rainy season' I was surprised we'd got this far.  I think it had rained once or twice overnight, but that had been it.  I guess we were just lucky.  The rain didn't dampen our fun though.  The river was lovely, and the waterfalls were amazing! 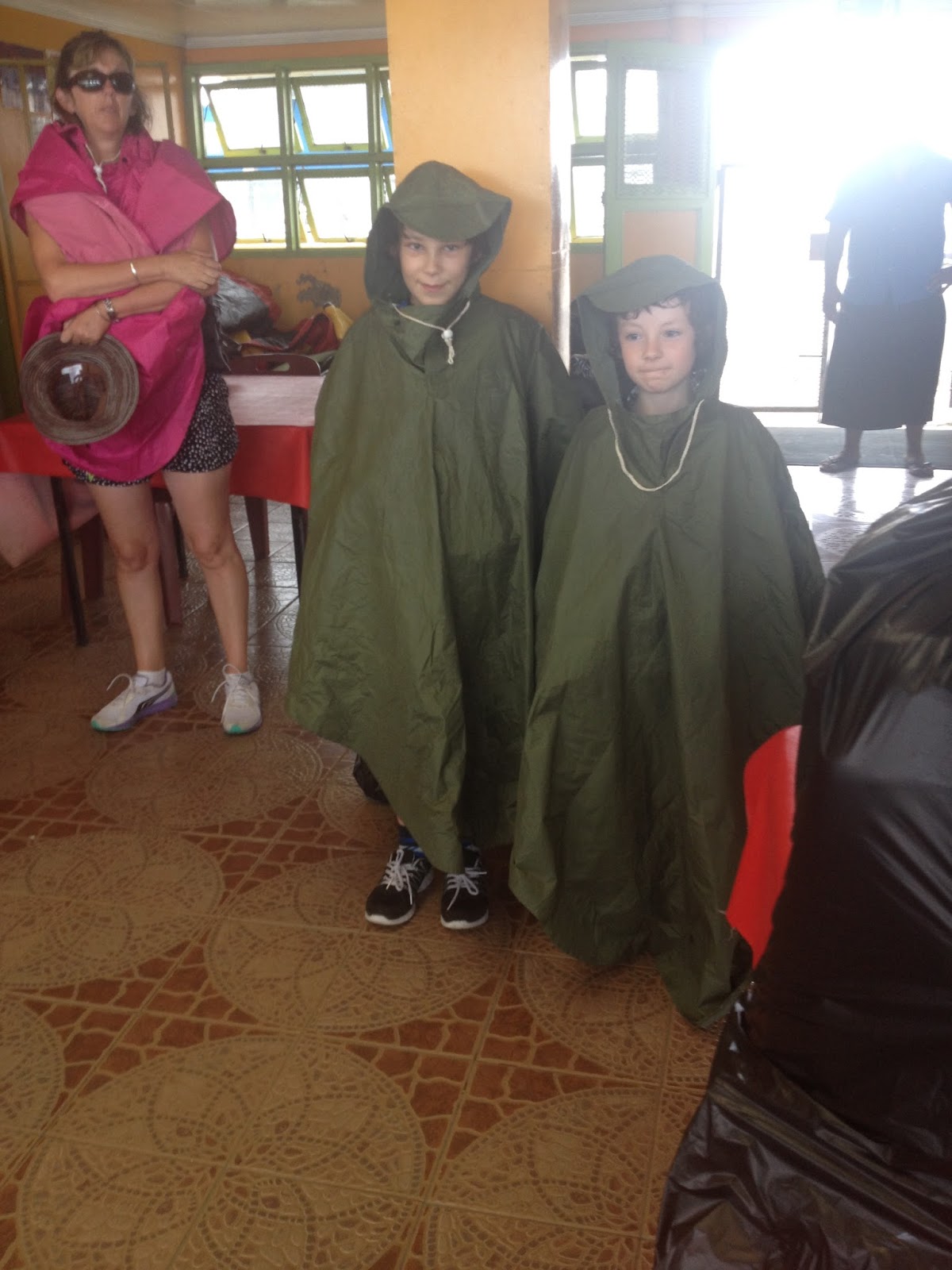 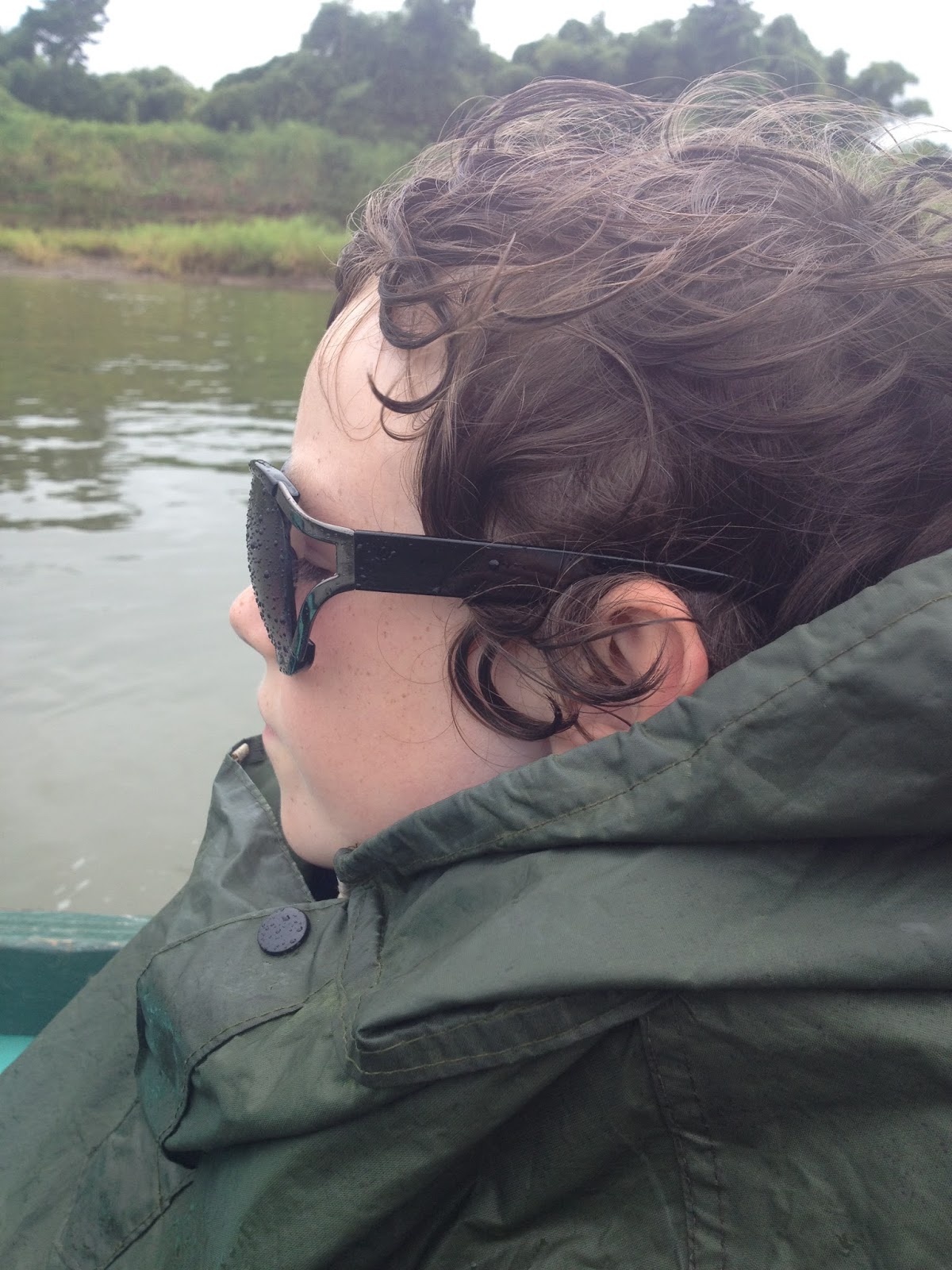 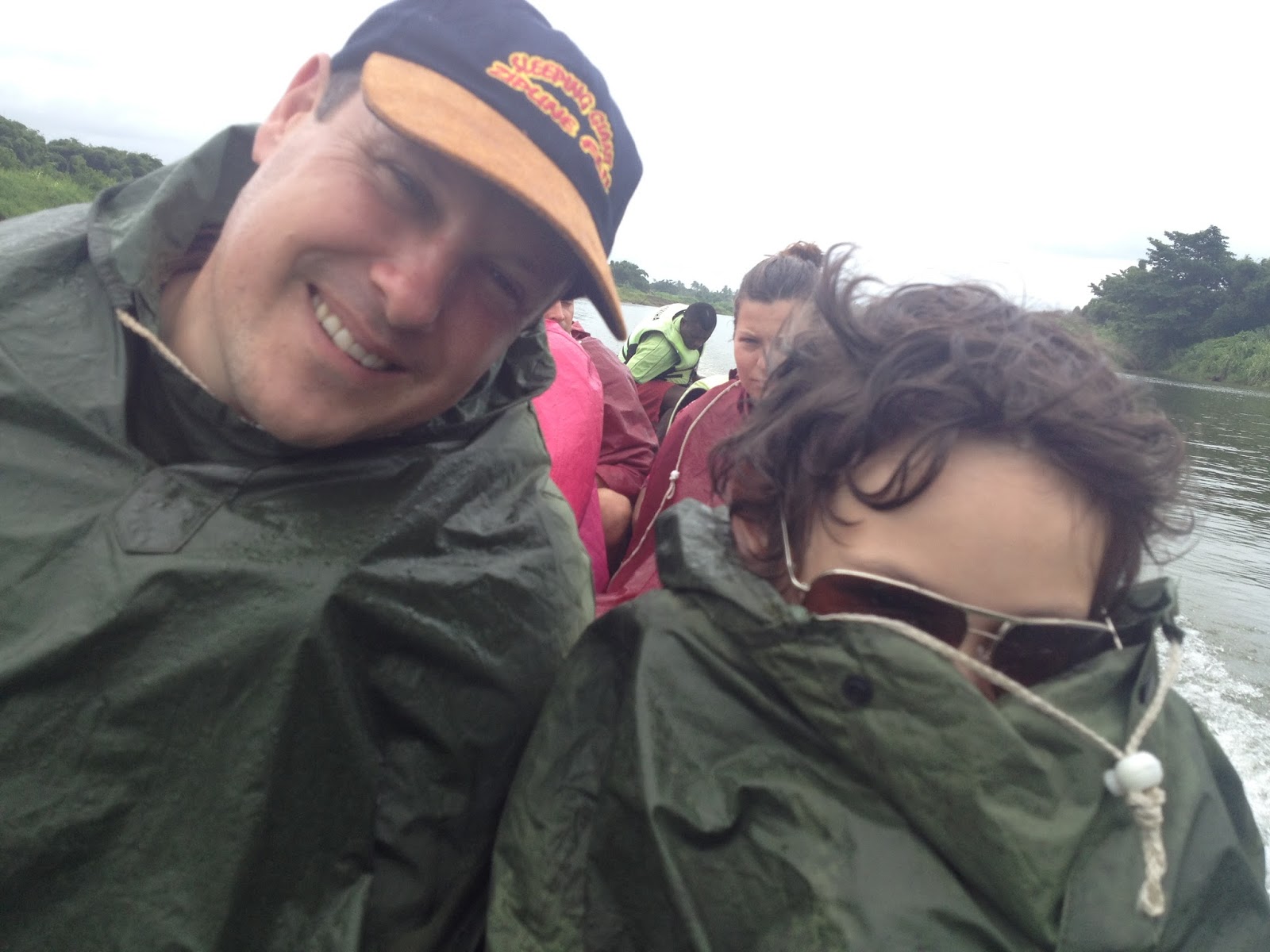 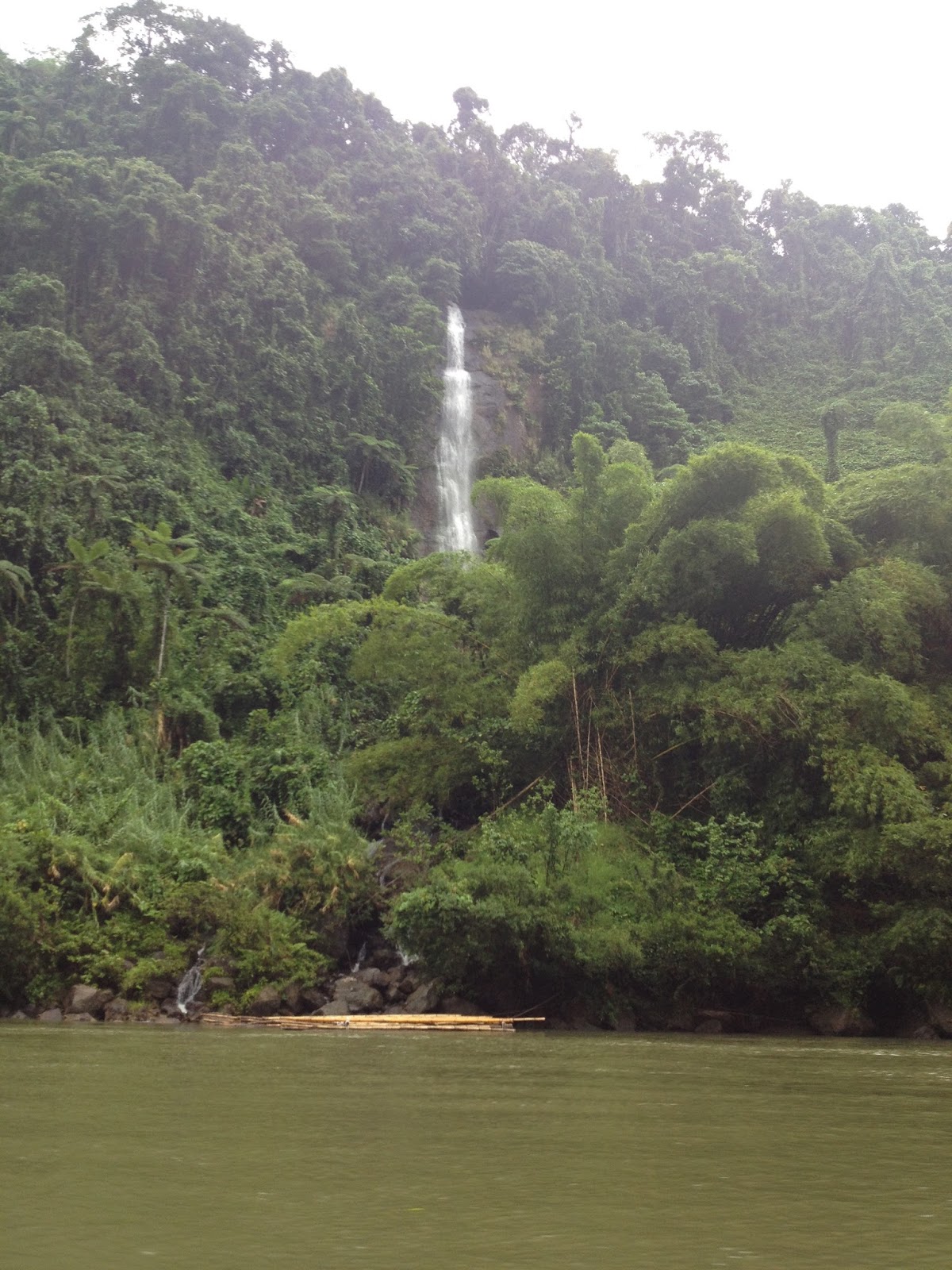 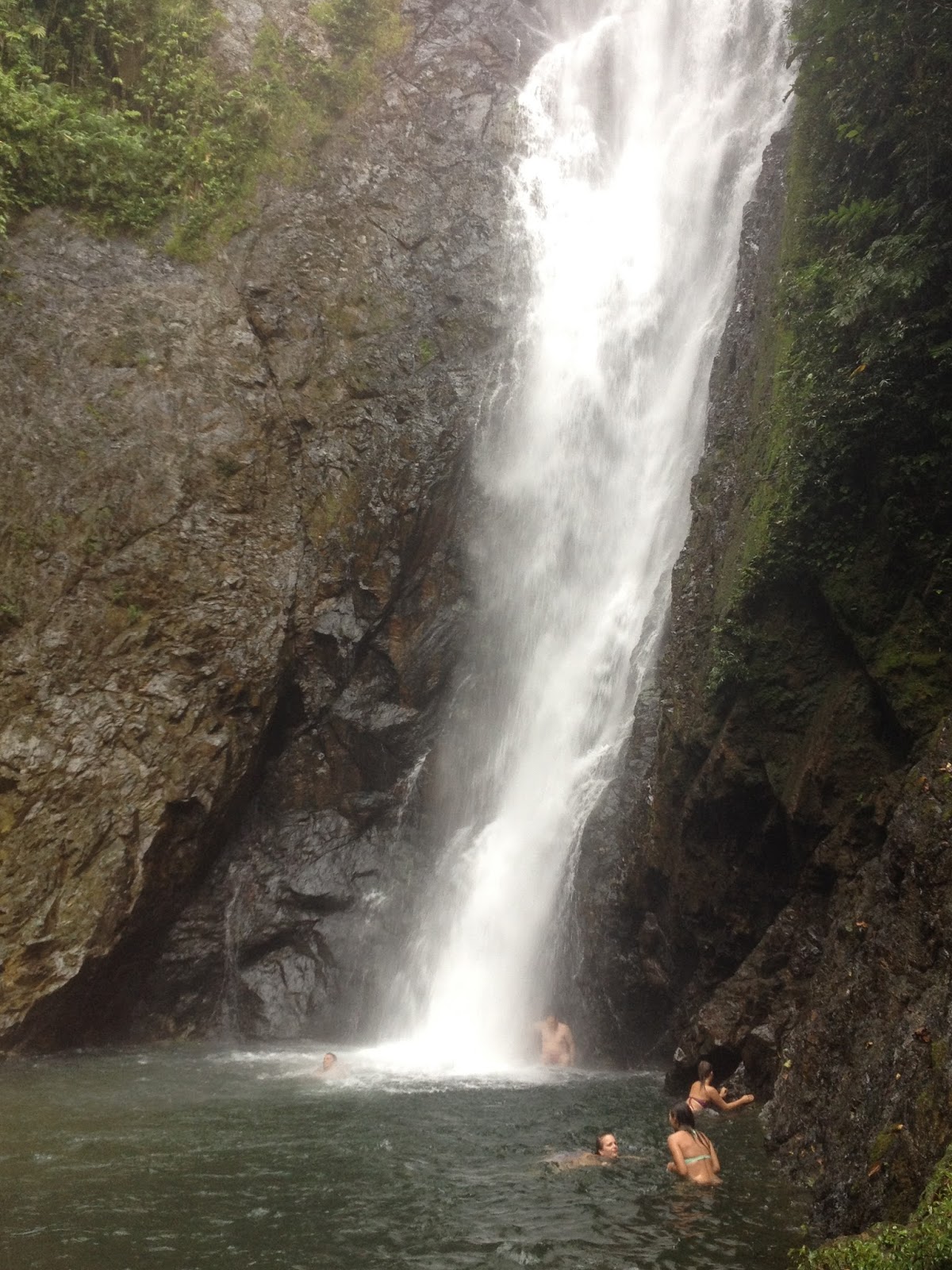 This trip also included a village visit, and bamboo raft ride.  The village visit was quite different to the one on Naigani, as this village had a lot more tourist money funneling into it, which was quite apparent by the state of the buildings and the facilities.  The entertainment was good, and they put on a lunch for us which (hurrah!) included palusami.  There were souvenirs available for purchase so we did a bit of shopping (why not?), the village children sung us some songs (OMG so cute!!), then we continued on our journey.  I could've done without the long bus ride to and from, but the tour itself was awesome.  I had a bit of a giggle on our way back from the waterfall - as we were walking along in our giant hooded ponchos, I heard T humming The Imperial March.  Ah, we are such nerds ^_^

The next day we did pretty much nothing, aside from going out for dinner.  Then all of a sudden, it was our last day.  We checked out of the resort, dropped our bags at the airport, then went to the Garden of the Sleeping Giant.  So much beautiful stuff to look at and enjoy! 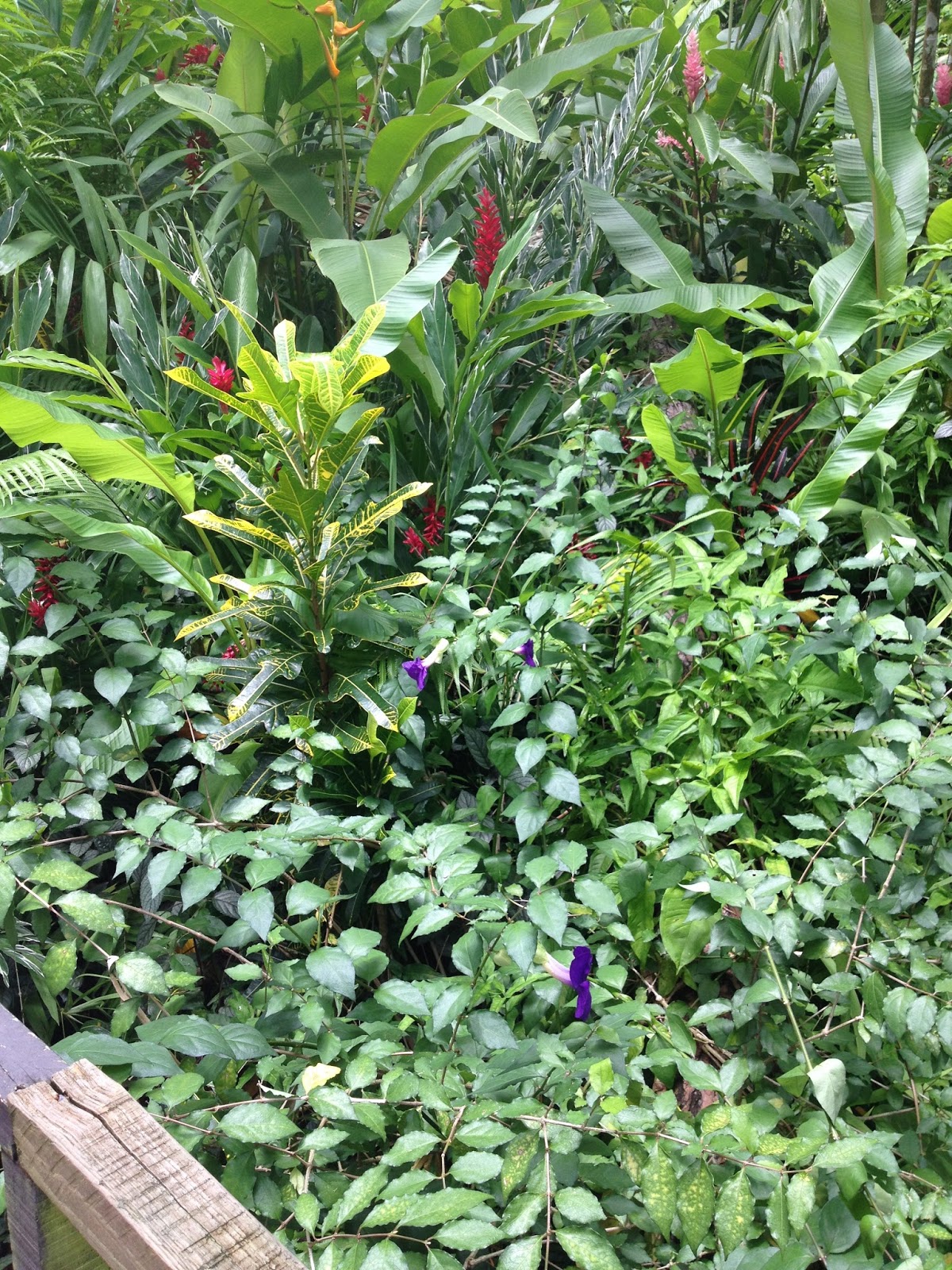 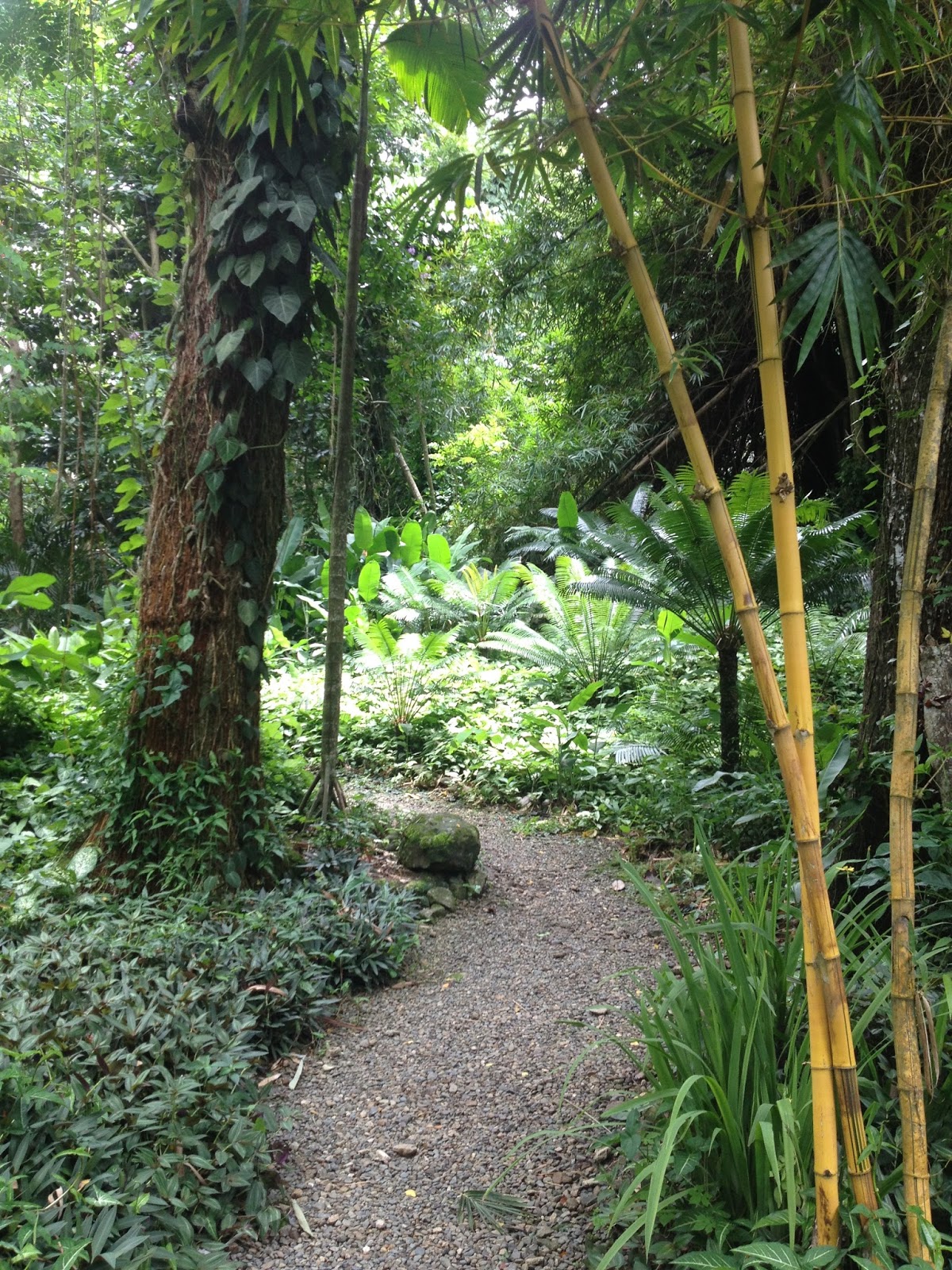 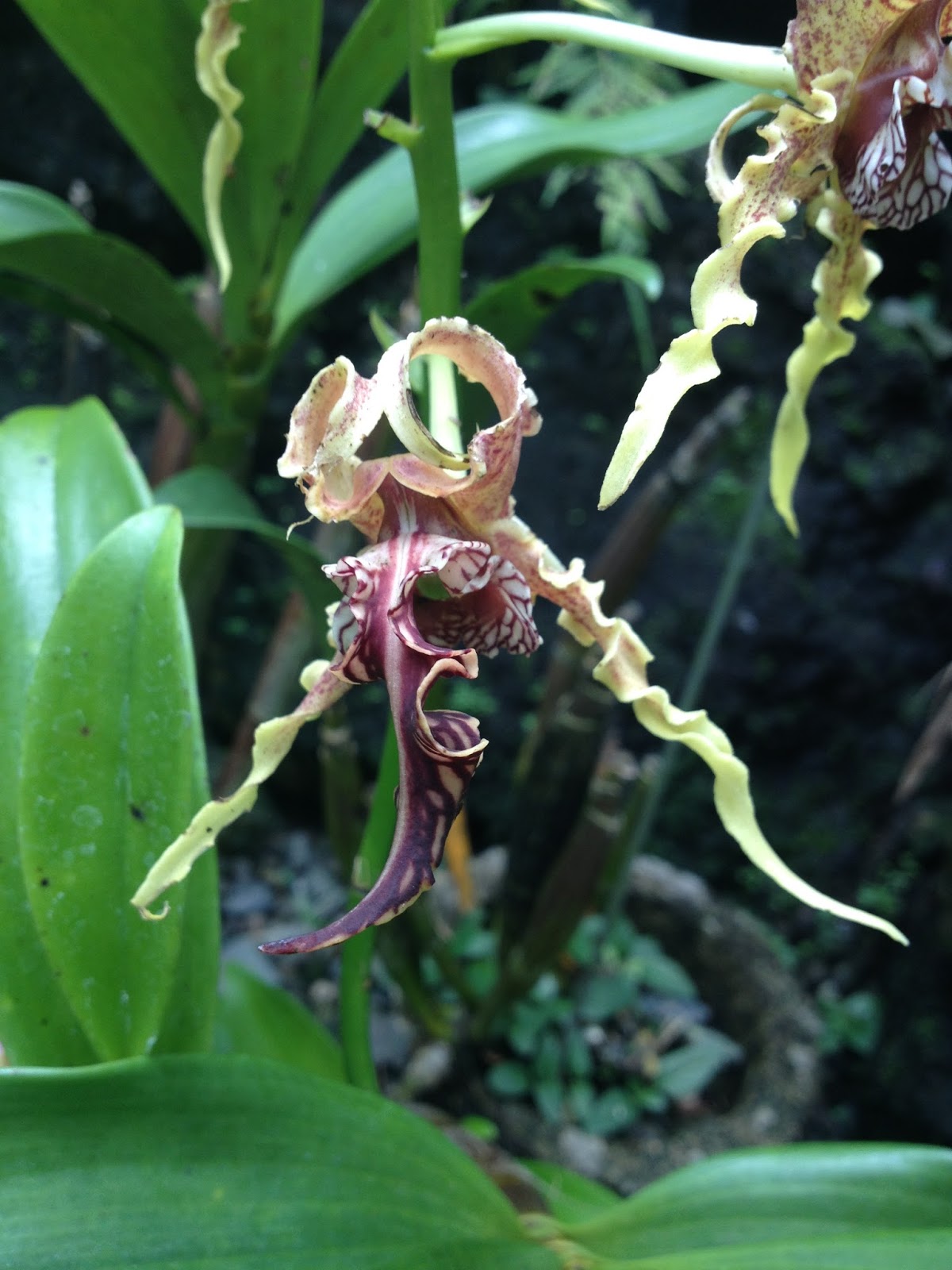 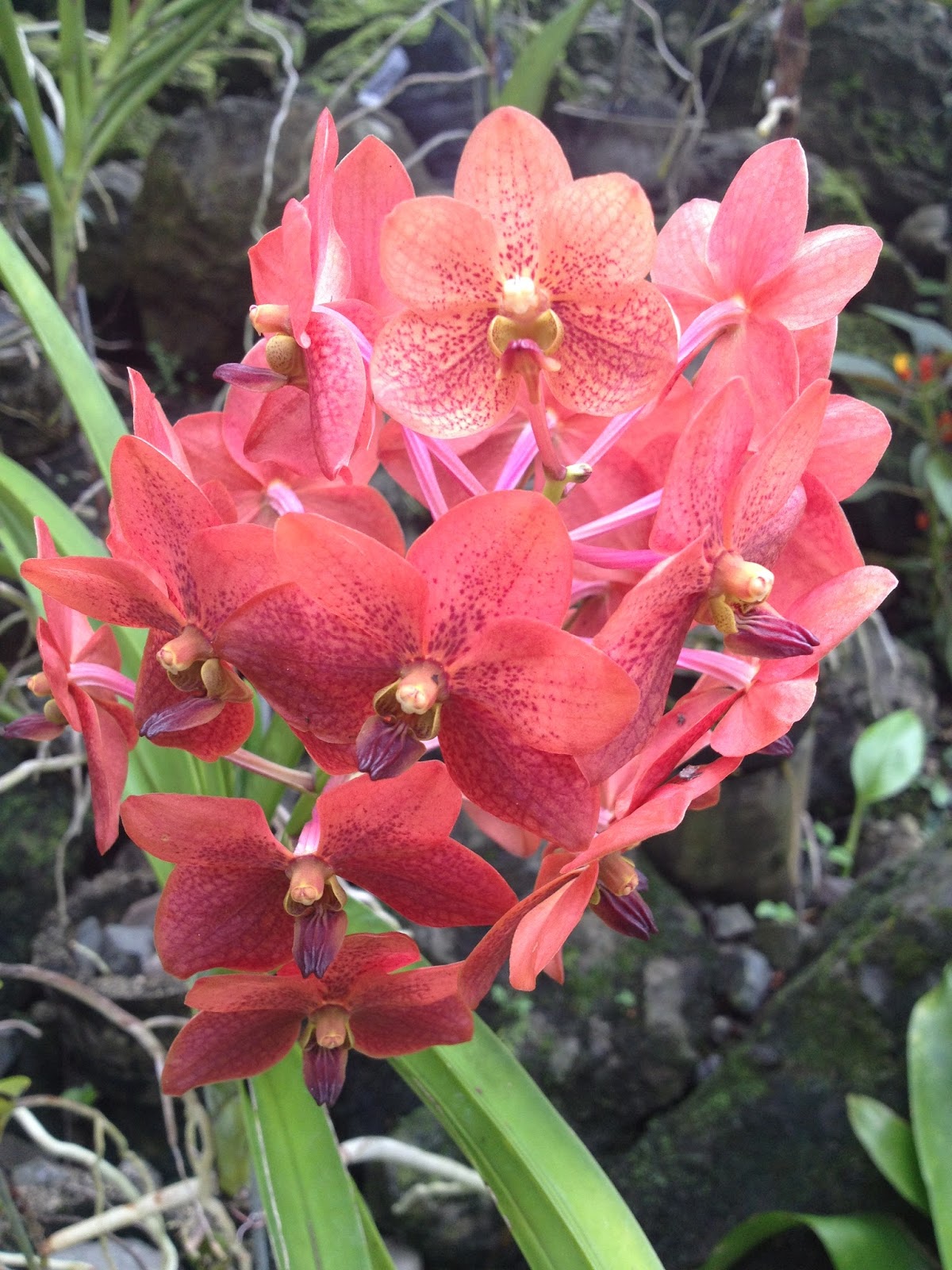 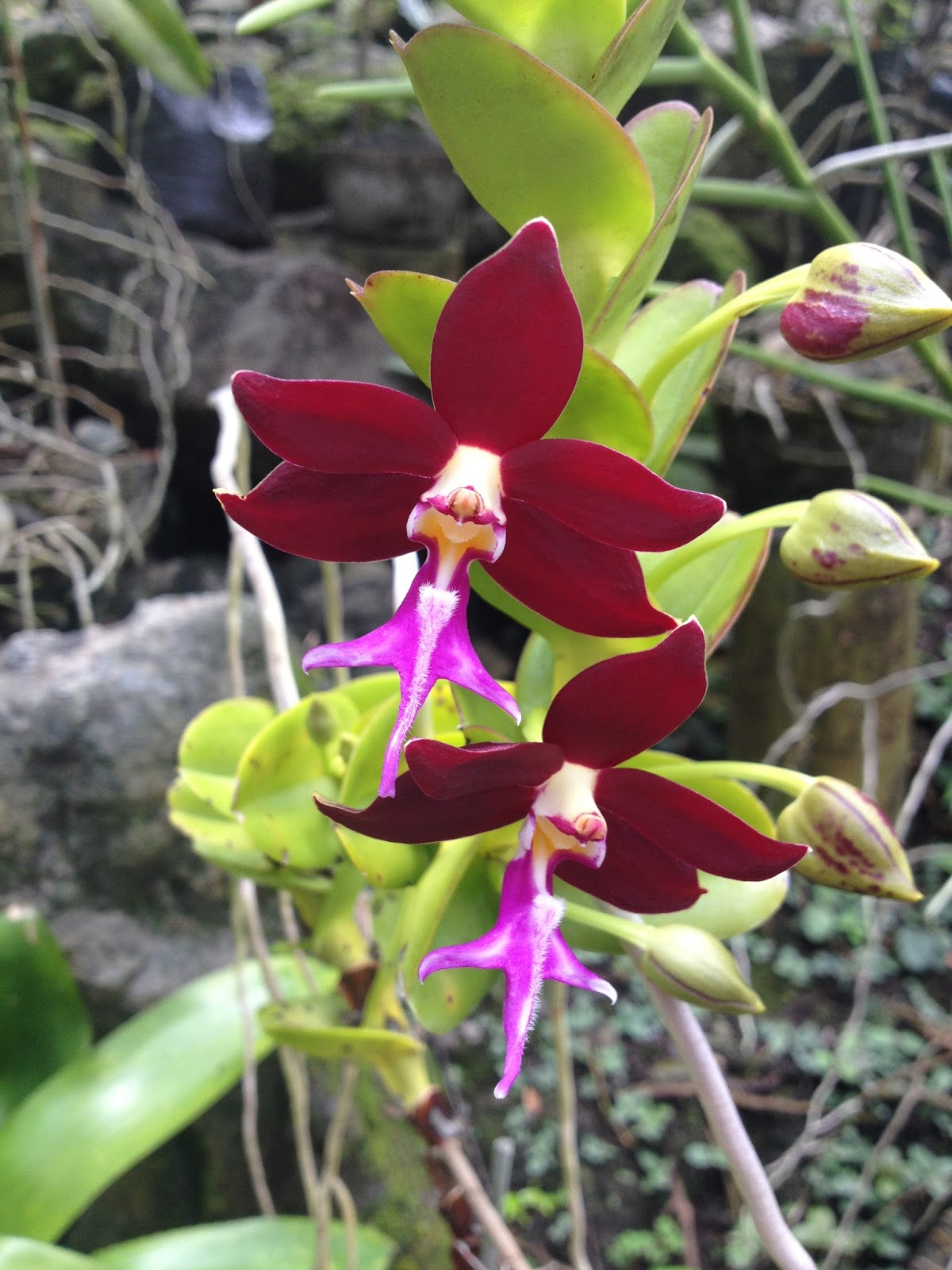 We had lunch in the gardens, then headed back to the resort area where the boys spent the afternoon at the inflatable water park.  Afterwards, it was time to head back to the airport and check in for our flight home.  We arrived back in New Zealand at about 11.30pm, and got home at a little after 1am, where we went straight to bed (except for Deane, who drove to Tauranga for a fishing trip with a friend.  He slept in the car when he got there, until it was time for them to head out at about 5.30am).  We thoroughly enjoyed our trip.  Would we do it again?  Hell yes!  Although we'd stay away from the heavy tourist areas, and stick more to the 'real Fiji'.  Naigani would be a definite repeat!  Hmm, maybe next year... 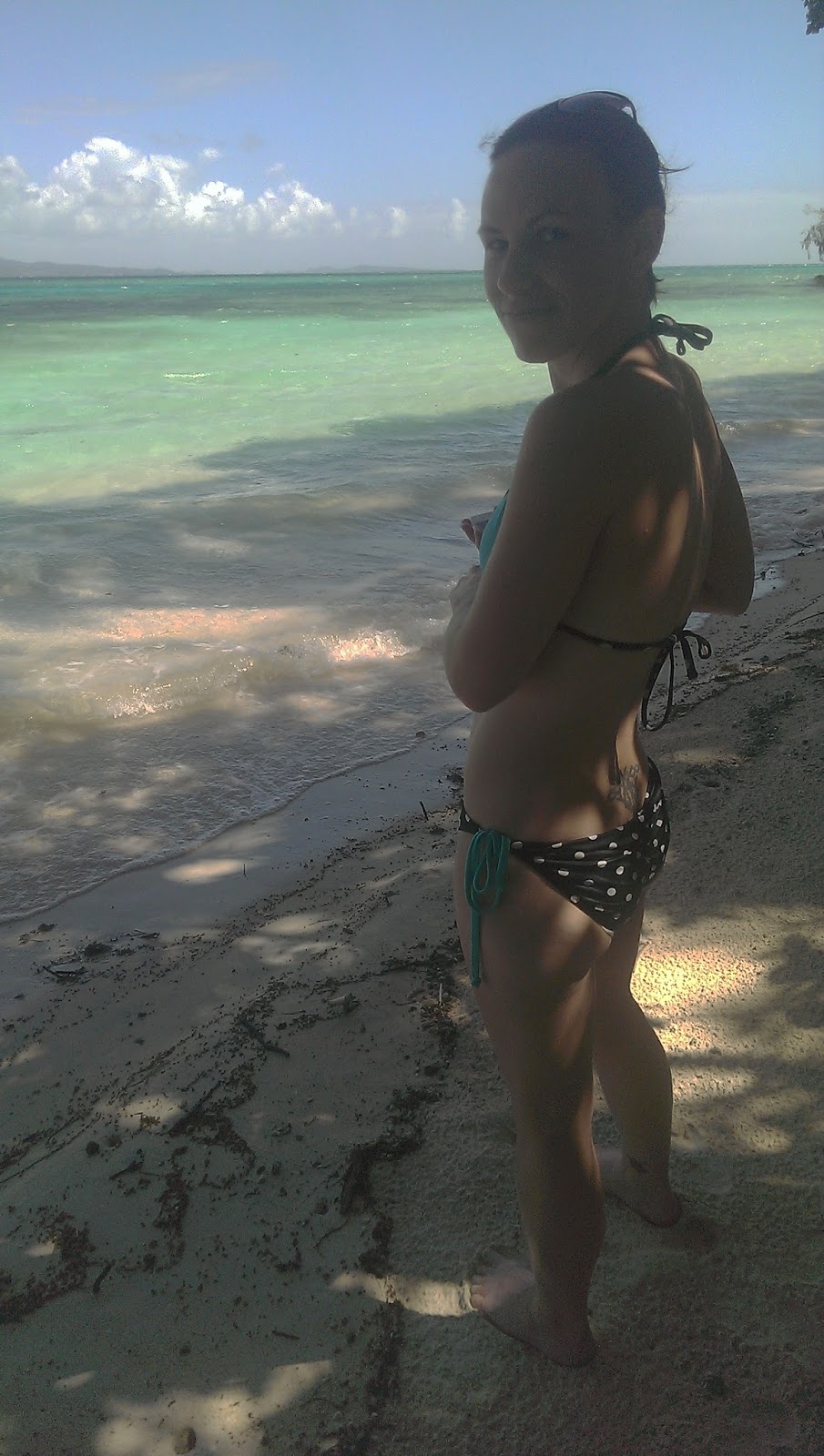 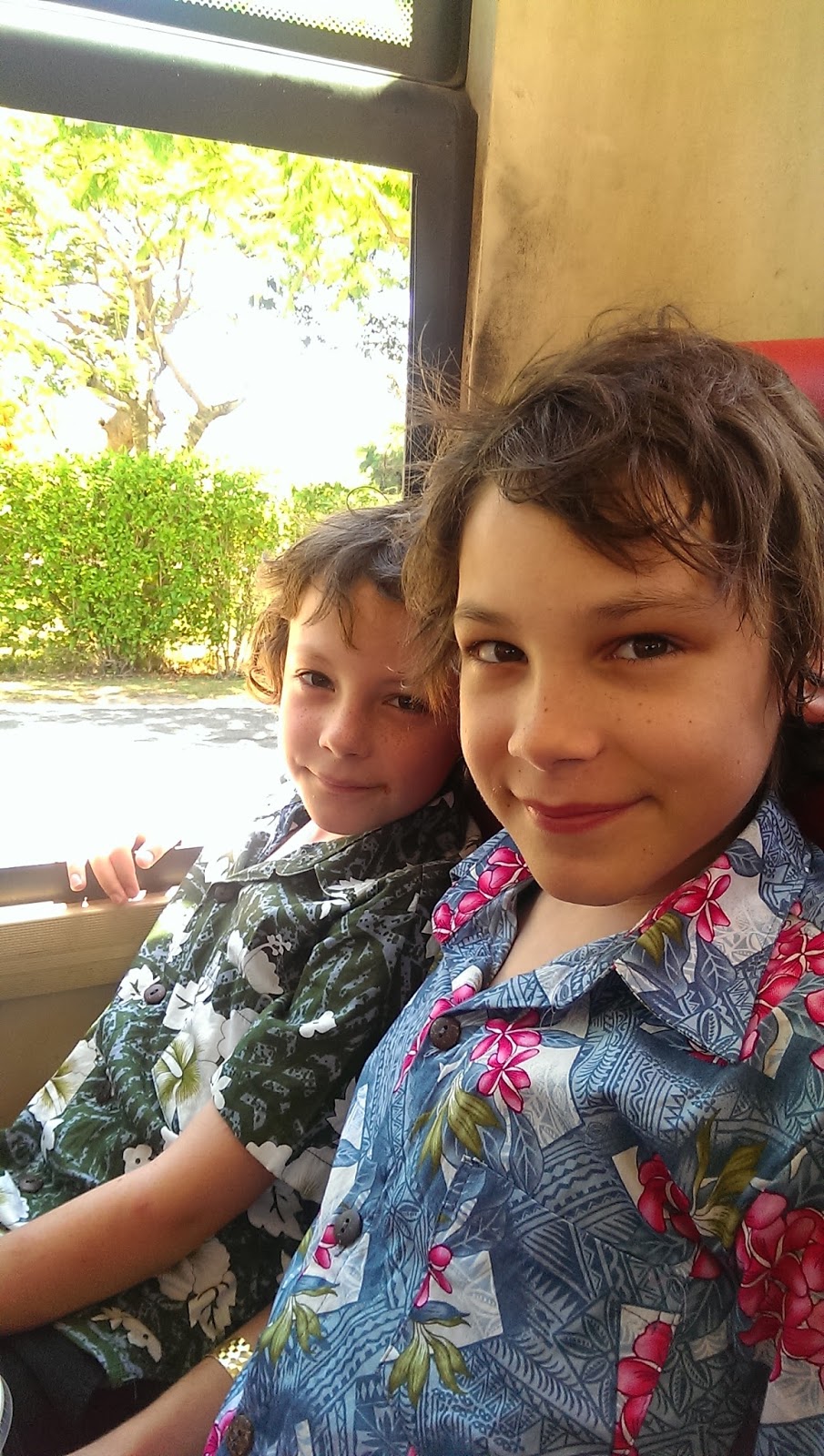 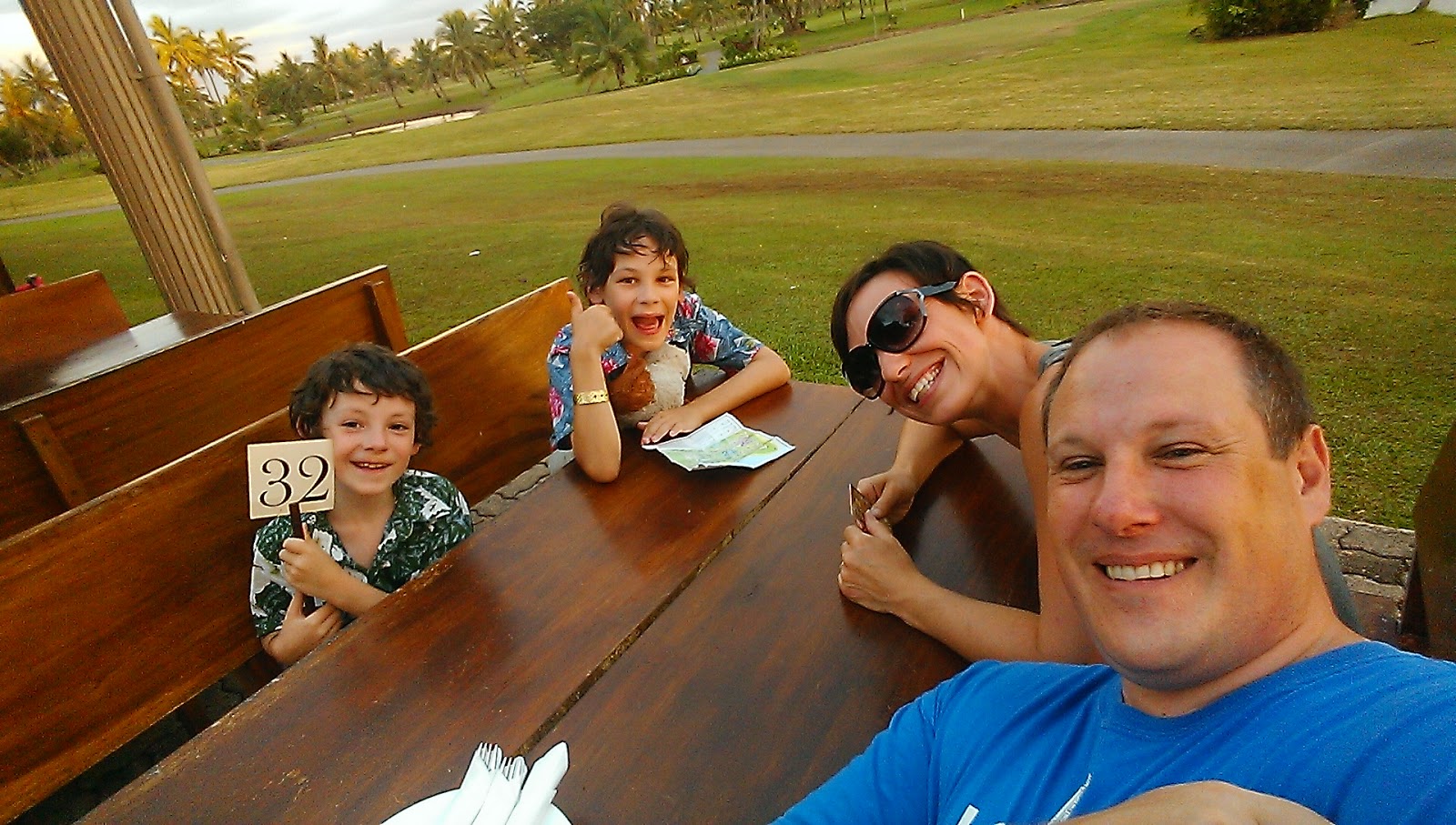