Attempt at nerd mum awesomeness = fail. And did I mention long runs are long?

My boys have been getting back into their comic books of late.  I'm not entirely sure what sparked it, but they dug out the box of Justice League comic books and have started reading them from Issue #1.  X also dug out the two Green Lantern Corps comics he had, and mentioned a few times that he'd really like the whole series.  Thinking how impressed he would be if I suddenly produced an entire comic book series seemingly out of thin air (and totally trying to win myself some nerd mum brownie points, lets be honest), I wandered in to Heroes on K Road this afternoon to see if I could track some down.  I was in the store less than a minute before a store clerk kindly asked if I needed help, so I inquired about back issues for the Green Lantern Corps series.

"Oh yes, we have most of them here, and what we don't have I'm sure we can order in for you.  The series is still running, so you can sign up for a subscription if you like, and when the new issues arrive in store we contact you" (I'm paraphrasing).

Fabulous!!  I signed up for the subscription, he pulled out as many back issues as they had, and put a note on file to find the rest.  I paid for all the ones they'd given me and walked out of the store, daydreaming about all the cool ways I could surprise X with them.  When I got home I checked to make sure I hadn't accidentally doubled up since I wasn't sure if we had Issue #1 and Issue #2, or Issue #0 (yes those actually exist) and Issue #1, and discovered to my horror that I had purchased a completely different series of comic books!  Sure, they were still Green Lantern Corps, but it was the latest series.  The series we had started with was the previous one from back in 2006!!  OMG, was it really that long ago?!?  Wow, that 7 1/2 years went really fast...  So I was rather disappointed that I had made such a simple yet huge mistake, and had to break the good/bad news to X explaining my complete fail at trying to do something awesome.  But you know what?  He didn't care, and said it wasn't a fail at all.  He's already read one, and is impatiently waiting for the missing issues to arrive so he can really get stuck in.  He's a little obsessive like me and wants to read them in correct publication order ::Huge sigh of relief.  About his acceptance of the new series, not the obsessive thing.  Ah, who am I kidding?  I'm glad he likes to read things in the 'correct order' too::

Okay, so that covered the nerdy nerd news, now on to the running nerd news.  You know that 30km I ran last Thursday?  That was long, right?  Well, on Sunday I ran another 25km.  You see, Cosset had put up an Instagram pic showing their blackboard menu items for Saturday and the falafel on rice caught my eye instantly.  I luuuuuurve falafel.  And rice.  And salad.  And seriously, vegan tzatziki??  How could you pass that up?!?  I commented that it sounded amazing but I couldn't make it in (had already planned my lunch for the day, because food nerd), and asked if they'd be repeating it any time soon, to which they replied "why yes, it's been so popular we're doing it all again tomorrow" (again, paraphrasing).  Awwww yeah!  Time to plan the running route!  I logged in to walkjogrun (love that site) and planned a 25ish km route, deciding to take in some of Auckland's famous volcanoes - Mt Albert (new to me), One Tree Hill (one of my faves) and Big King in the Three Kings area.  Rather than stop in to Cosset mid-run like I did last time, I drove out there and parked around the corner so I could complete my run and then stuff my face.  Which I totally did ;)  I got to see some more of Auckland that I hadn't seen before - some good, some not so good.  As usual, I snapped a few pics along the way.  And, as you can see, I have still yet to master the art of the mid-run selfie: 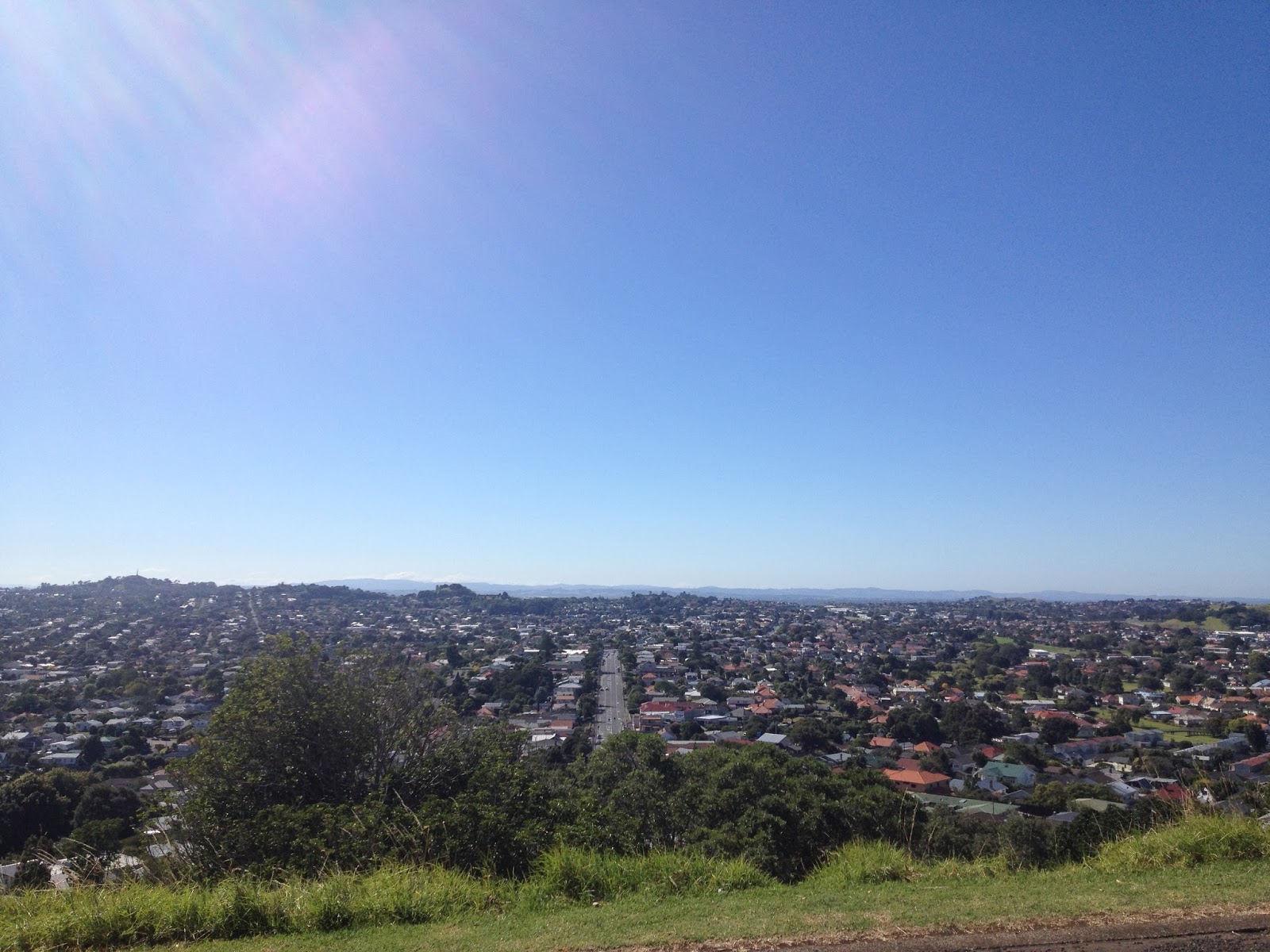 Ah, suburban Auckland.  View of Mt Albert Road smack-bang in the middle.  At least I think it is... 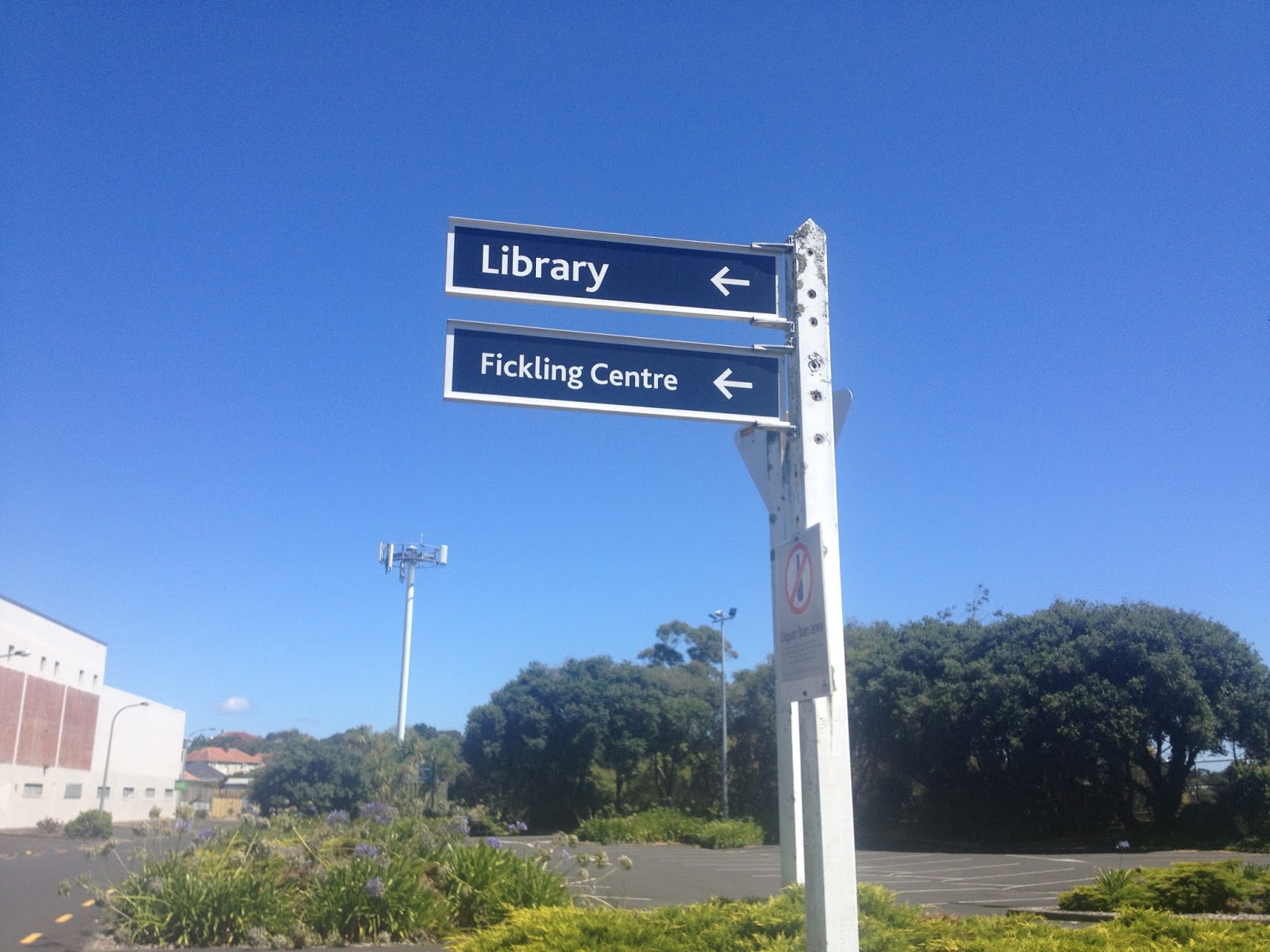 Okay, so I know (because I googled it) the Fickling Centre is a convention hall, but at the time the sign made me laugh 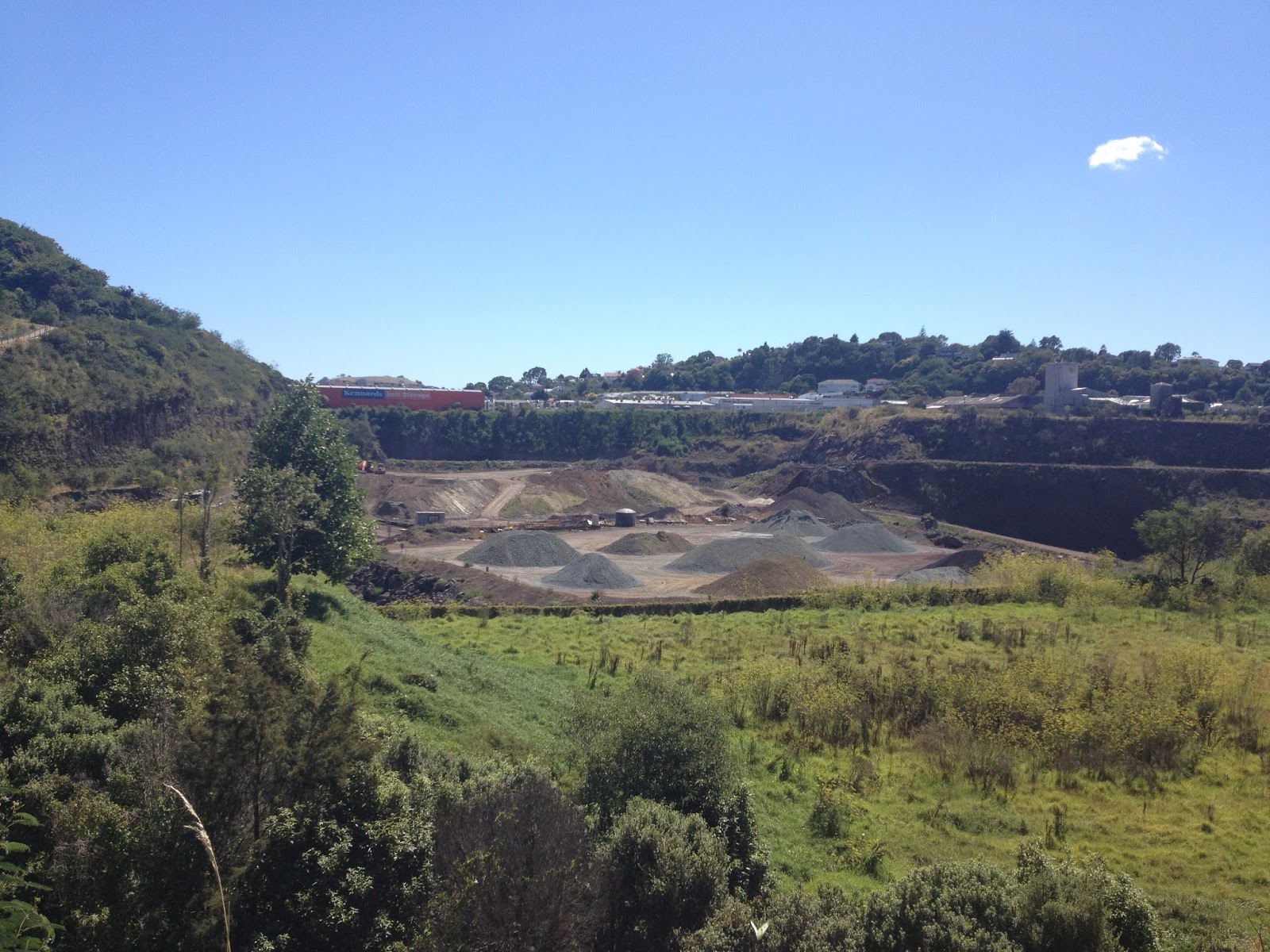 View of Three Kings Quarry on the way up Big King 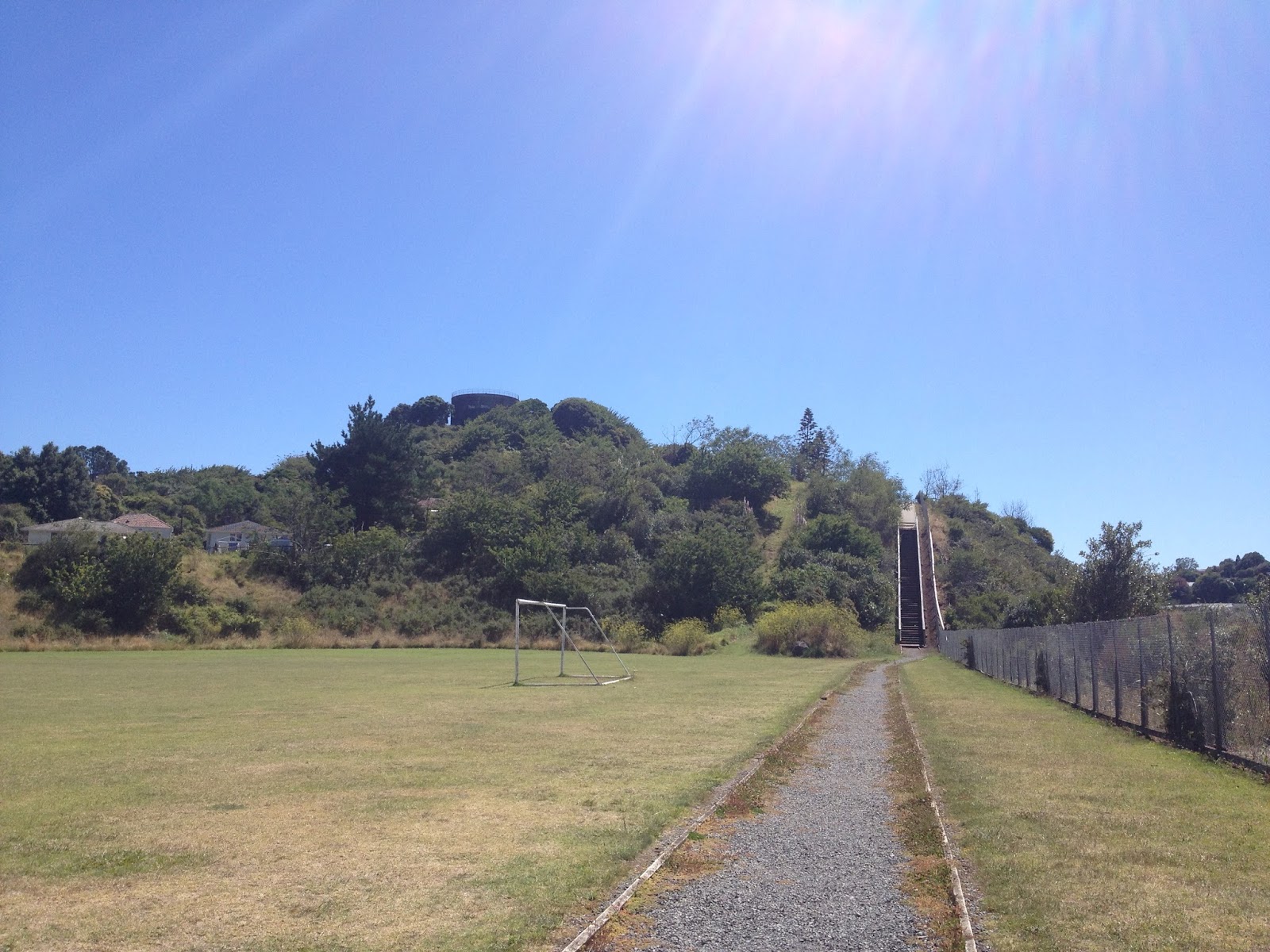 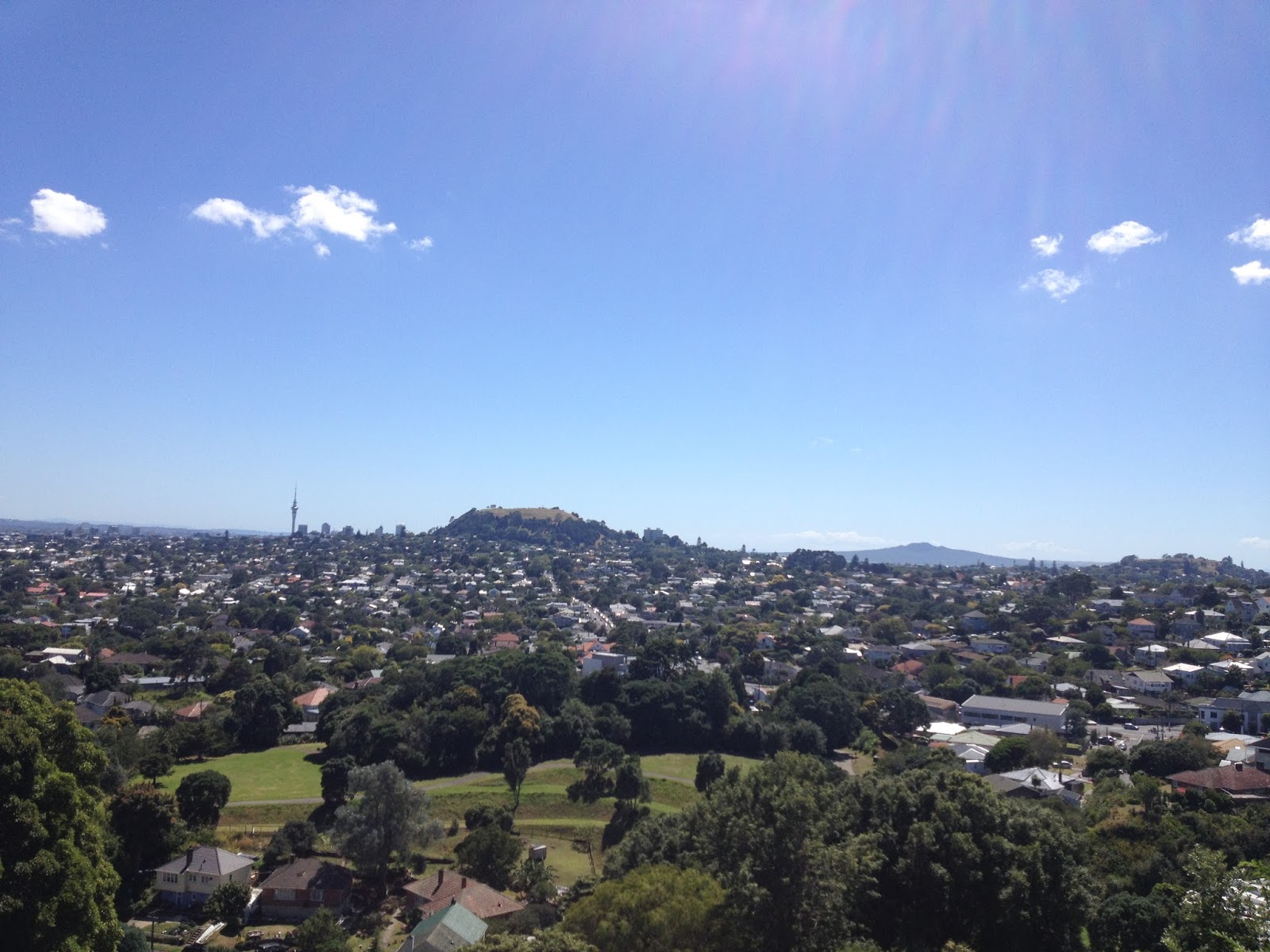 From Big King, a view of (from left to right) the Sky Tower, Mt Eden, and Rangitoto, with Mt Hobson on the far right.  I think.  Yes I know, I should take local geography lessons.  Or perhaps stop potentially incorrectly naming local landmarks... 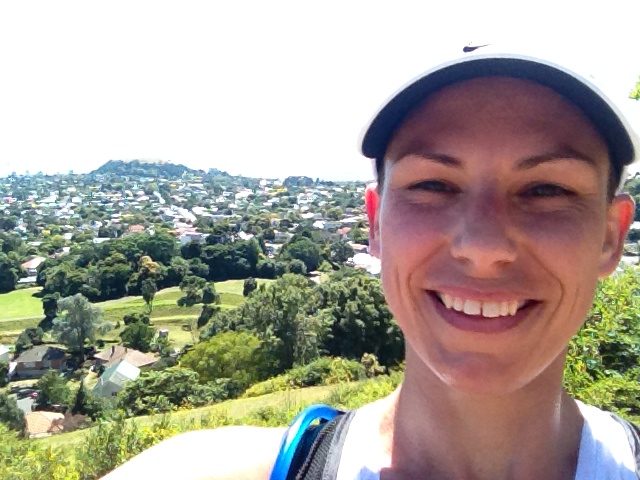 Appallingly bad selfie #1 (I was trying to get the same view in the pic as what is in the photo above.  I have no idea why the blue sky is suddenly non-existent) 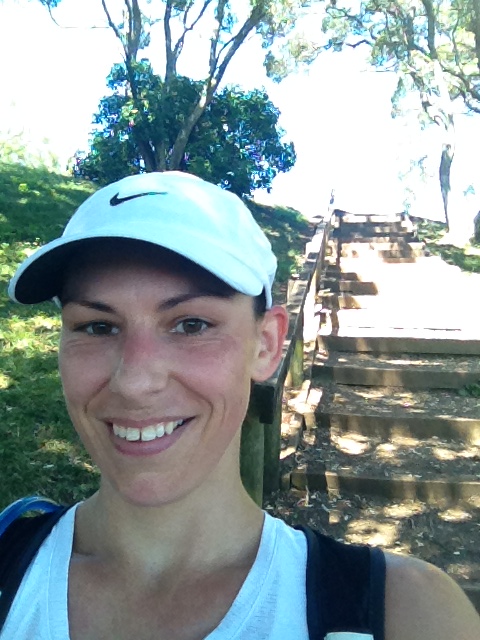 Appallingly bad selfie #2 - same issue with the sky.  Methinks it has something to do with my hat, and the fact that I'm using a cellphone camera... 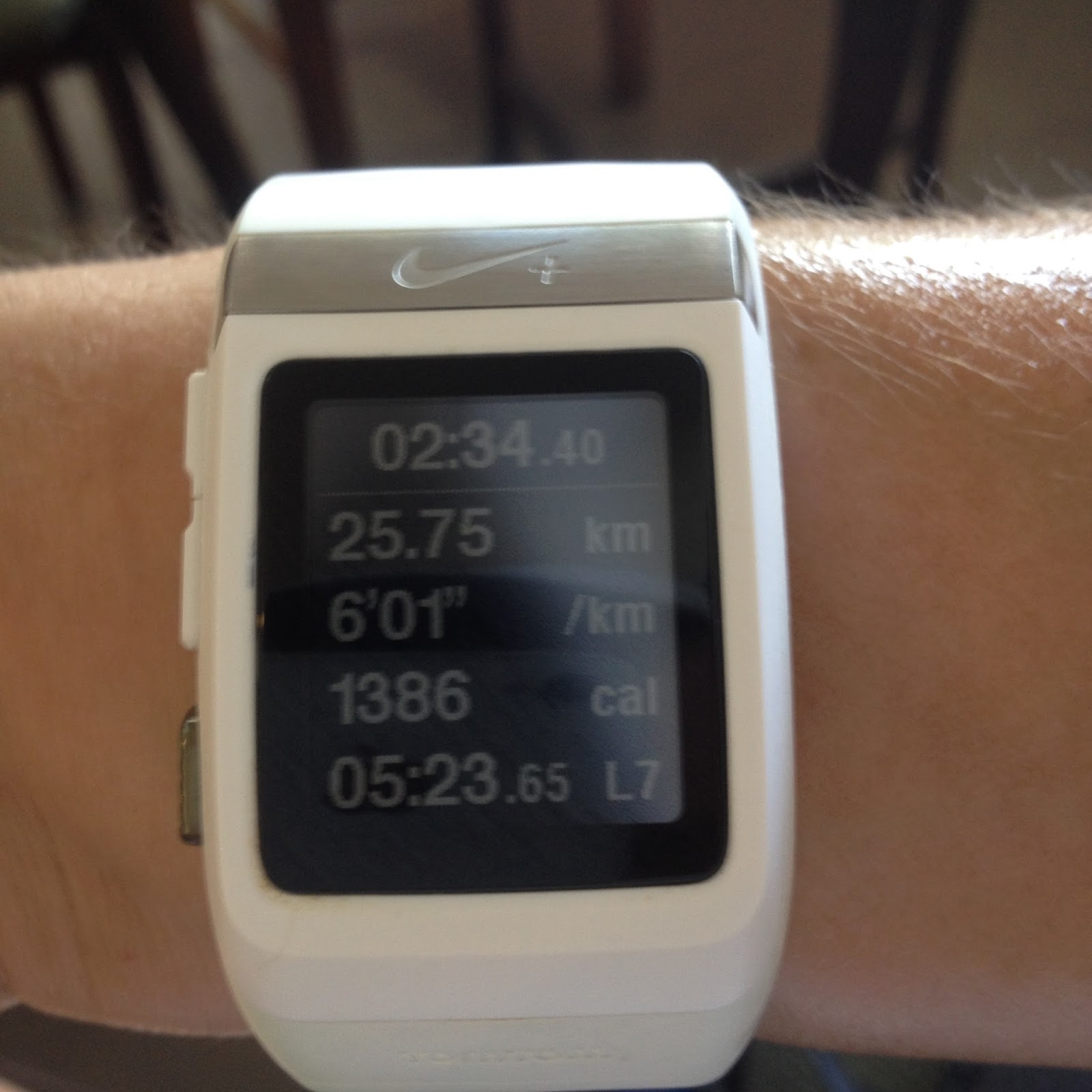 Proof of said long run (complete with sweaty arm), which was edging towards 26km.  Slightly quicker average pace than the previous run, so there's a win. 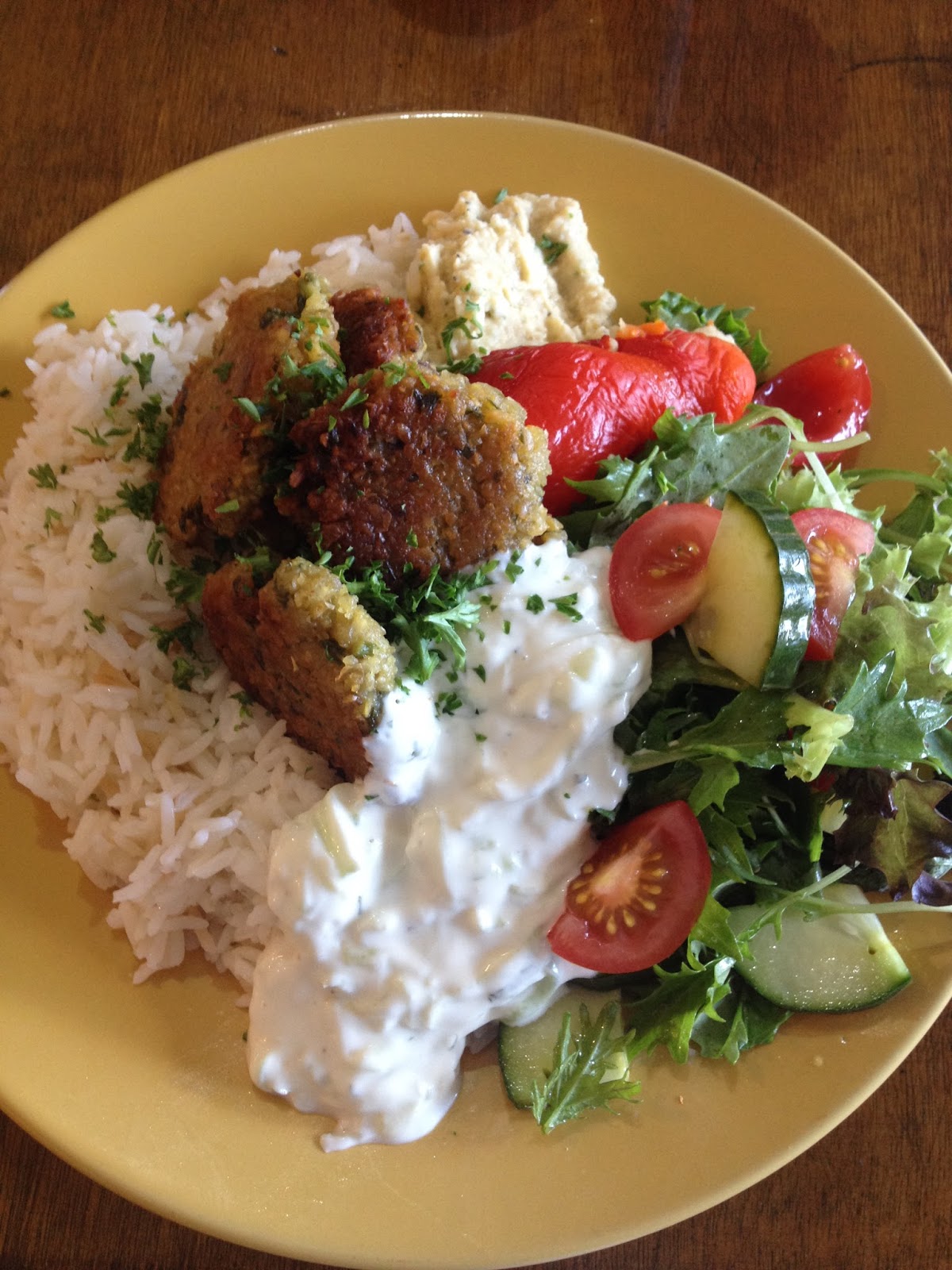 The eagerly-awaited and quickly-devoured falafel on rice, complete with salad, hummus, and the most amazing vegan tzatziki evaaaaaaaar

Unsurprisingly, I got a little tired towards the end of the run but the thought of that lunch spurred me on (along with a few walking breaks).  I'm still very far behind my half marathon PR pace (which was 5'02" per km - yep, a whole minute per kilometre quicker!) so I'm not expecting an amazing time at the Coatesville Classic in March, but I'll keep working on it and maybe, just maybe, I might be able to pull off a sub-four hour marathon in November.  Here's hoping...

I was amused to find that when I arrived at Cosset and started to order, it was like the girl knew what I was going to say before I said it.  I figured that because I was looking at the board at the time, and because the falafel had been so popular, it was a fairly natural assumption.  But she said 'I remember you' (yeah, pick the sweaty red-faced runner) then followed up with 'you're amazing.  How far did you run this time?'  I guess the combination of my last mid-run visit complete with Instagram post (the chocolate almond brownie), and comment of 'I shall plan my run accordingly' after news of the falafel repeat for Sunday kinda tipped her off, lol ;)  In any case, I was chuffed (particularly because they hadn't sold out of the falafel before I got there - I was later than I expected, oops) and thoroughly enjoyed my meal, although I couldn't quite eat it all.  There was a lot of food on that plate!  I went home happy :)

I had a rest day on Monday, then took Deane out for a light jog (for me, probably a bit more of a hard slog for Deane) on Tuesday.  Afterwards, we went to Little Bird for lunch.  Having already tried the raw pizza (amazeballs), I decided to go with the summer salad this time, and a cacao superfoods smoothie: 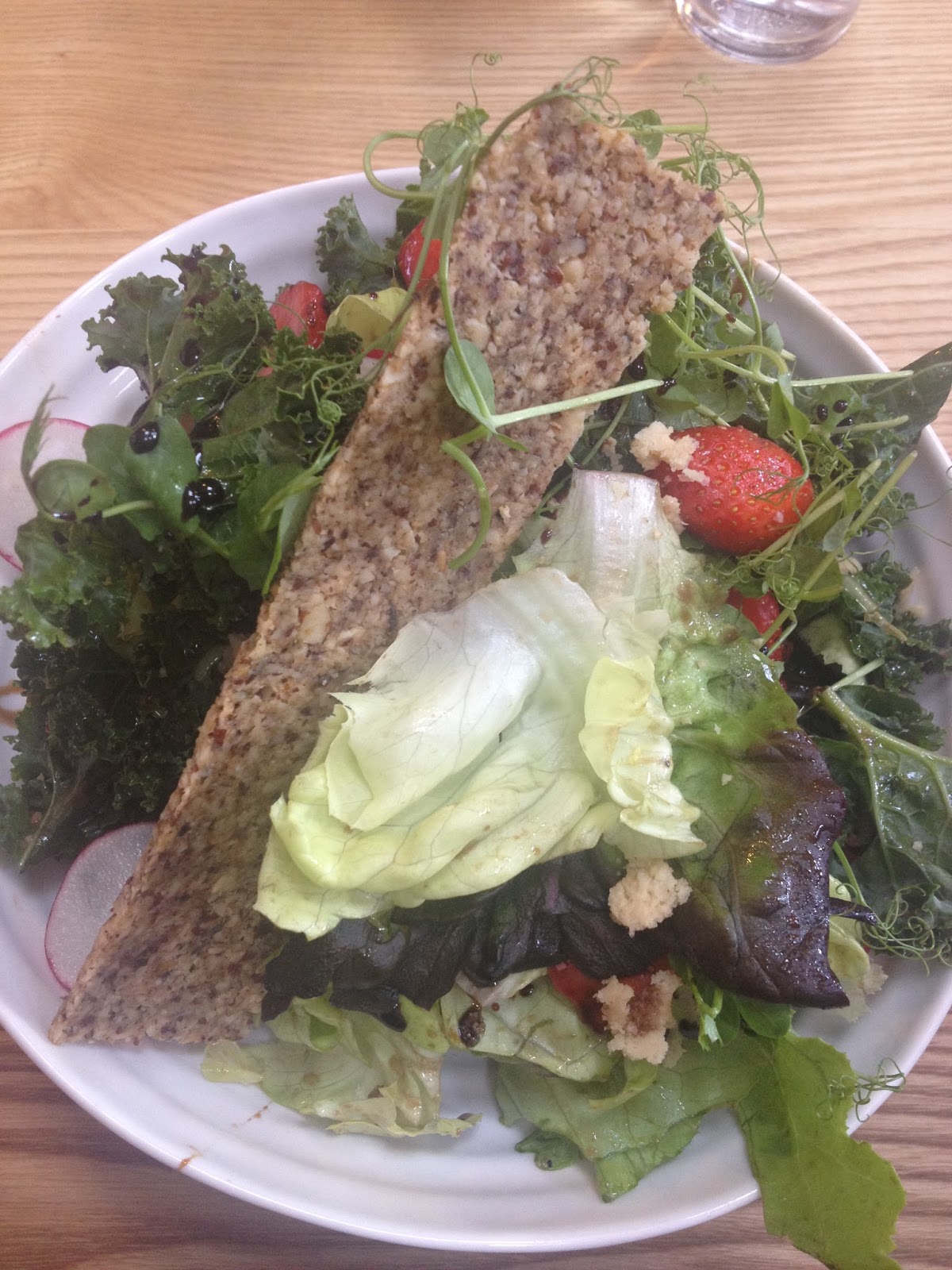 Deane had the portobello benedict's and thoroughly enjoyed it, although he was unimpressed with the wait time.  To be fair, they were slammed - Tuesday was super busy for some reason, and the lunch crowd didn't seem to die down.  By the time we'd been seated (yes, there was even a wait for that), ordered, received our lunch and eaten it, it was time to go get the kids from school.  Totally worth it though ;)  I could happily eat there every day, although my wallet might have something to say about it...

Today I went for another long run, knowing that I'll only be running 5km on Saturday (ParkRun) and about 10km on Sunday (practicing coastal running and rock hopping in Browns Bay to prepare for next weekend's Coastal Challenge).  The idea is to increase your mileage but not let it fluctuate too much from week to week.  Last week was a 55km week (in only two runs - that still floors me) so I was trying to increase this week's mileage to sort of match, but doing the maths after today's 22km, it'll still fall short by a good 13km :(  Guess I'd better plan a little better for the coming weeks!  For now though, we'll call it race tapering ;)  My 22km run was again an increase in average pace (5'44") and there were only a couple of short walk breaks (and some water/refuel/toilet stops) - it was an easy route out to Kohimarama Beach and back, but I'm thinking a return to music with headphones might be a good idea for these long road runs.  Trail running is always interesting regardless of time or distance, but road running can get a little monotonous, particularly if you're out there for two or three hours.

In food nerd news (because I are all the nerds) I'm still having fun trying new things.  I made a seriously good vegetable and soba miso soup: 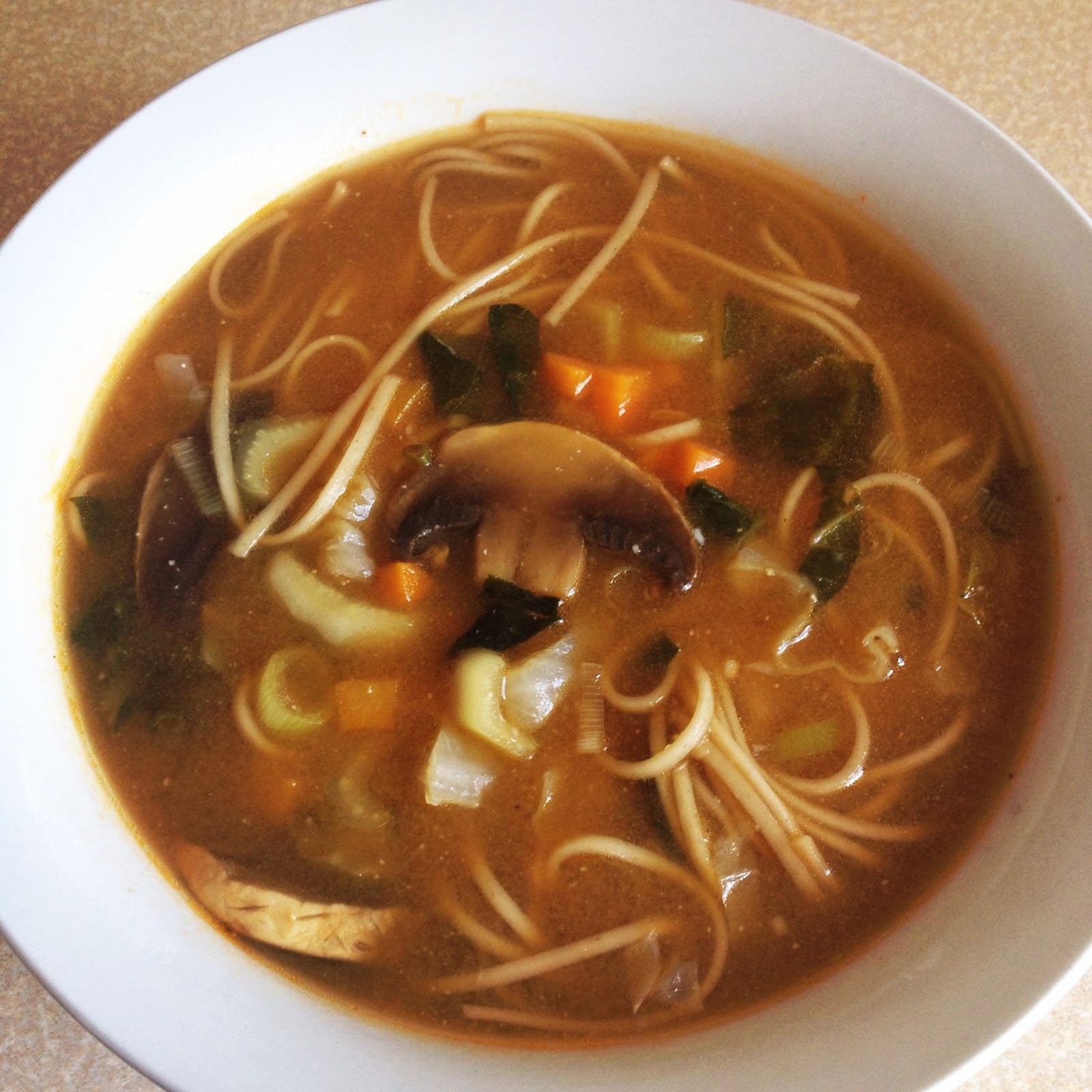 And although I thoroughly enjoyed eating it over a few days, it was around this time that my IBS really started playing up and I came to the decision to greatly reduce (or even cut) wheat from my diet (at least for the short term).  The noodles were mostly wheat based, and I'd been eating quite a bit of other wheat-based stuff (bread, waffles etc).  I noticed after eating these things that my stomach would bloat so much that I actually, literally looked six months pregnant.  I've been six months pregnant twice before so I know what it looks like, trust me.  It was rather disturbing.  So now I'm on a gluten free plant-based diet.  Yep, I'm one of those people... 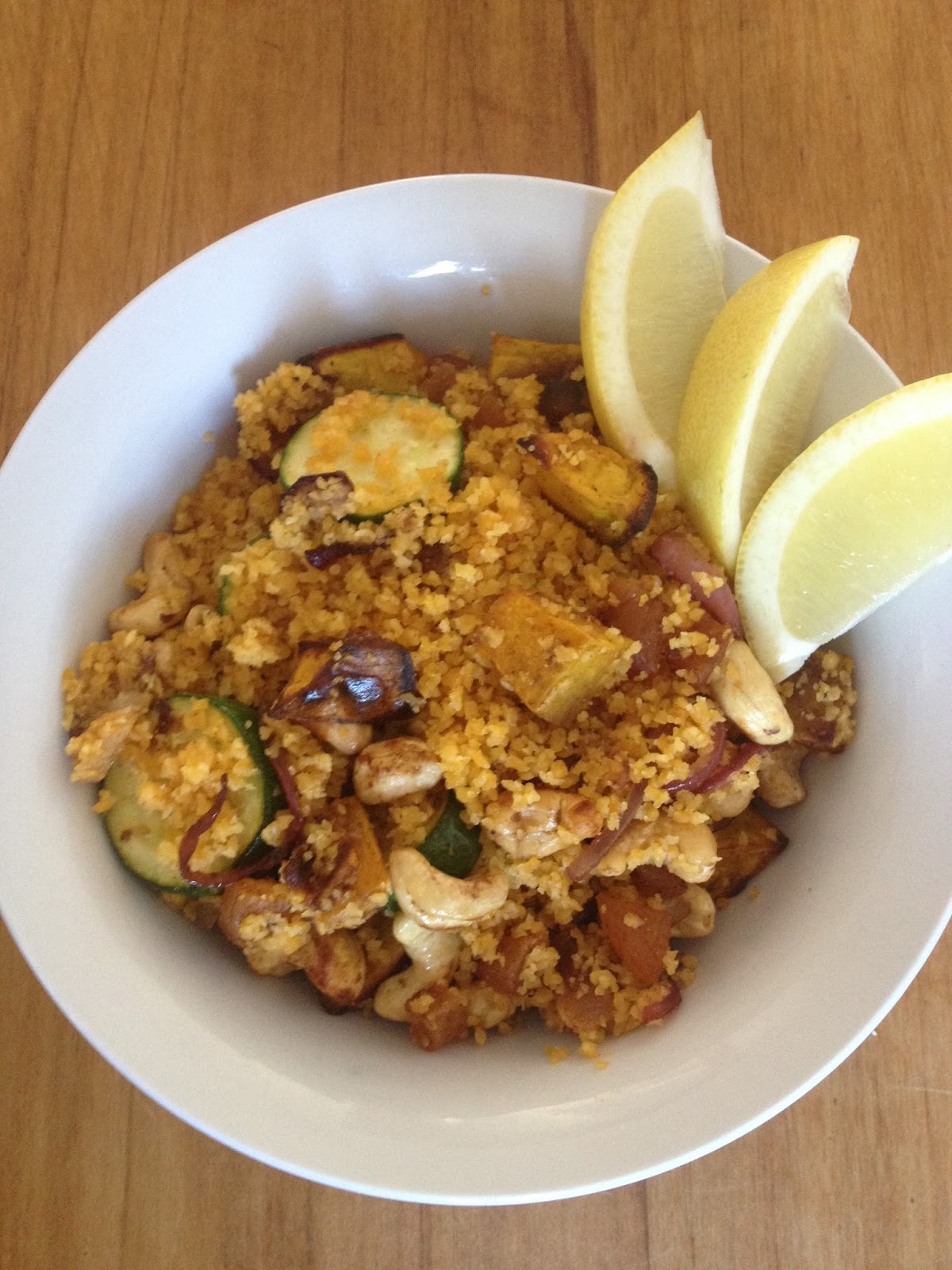 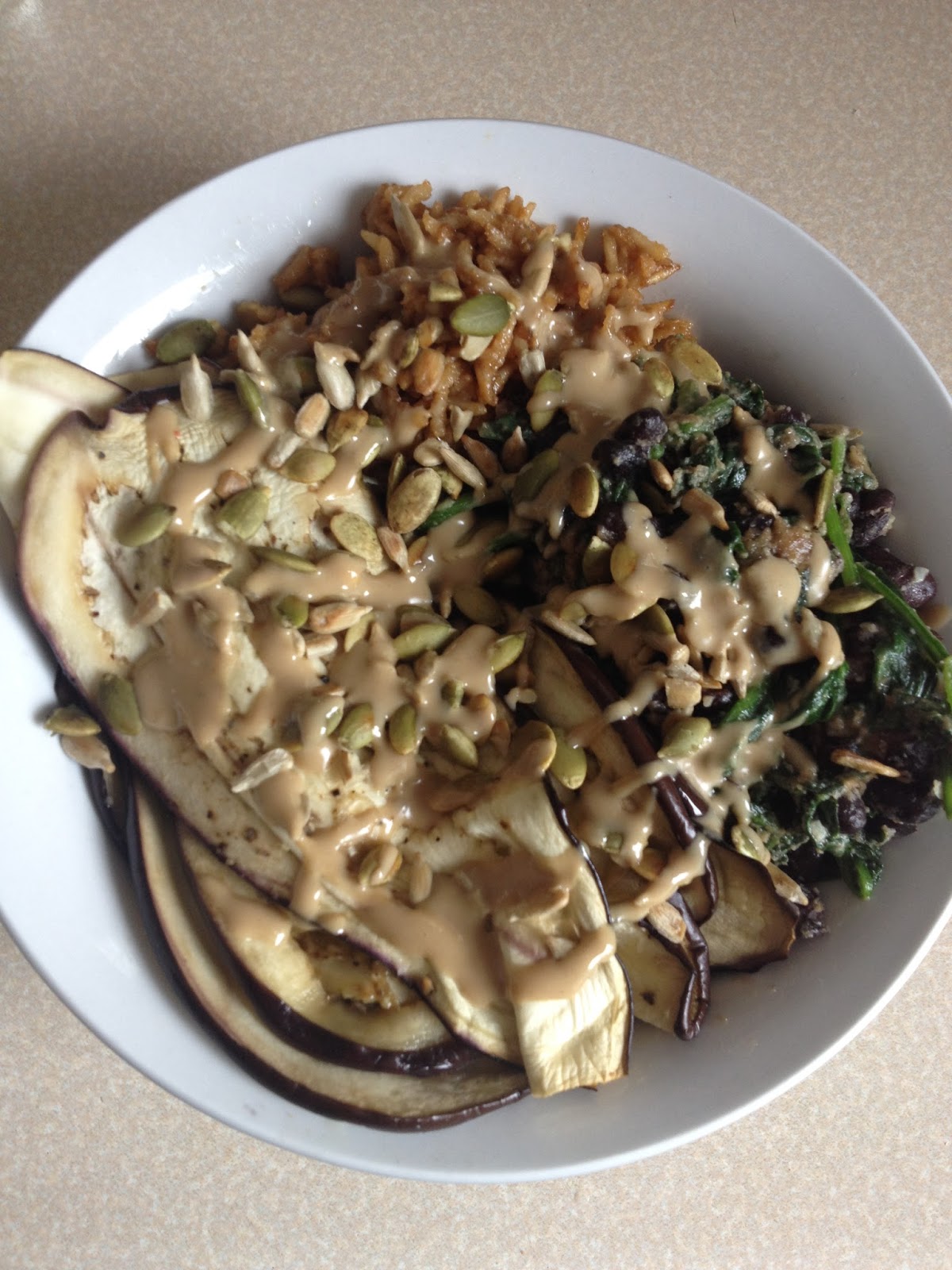 Roasted aubergine and tahini bowl - it was okay, but a little too heavy on the tahini.  If I were to make it again, I'd omit the tahini from the rice and spinach components. I like tahini, but not THAT much ;) 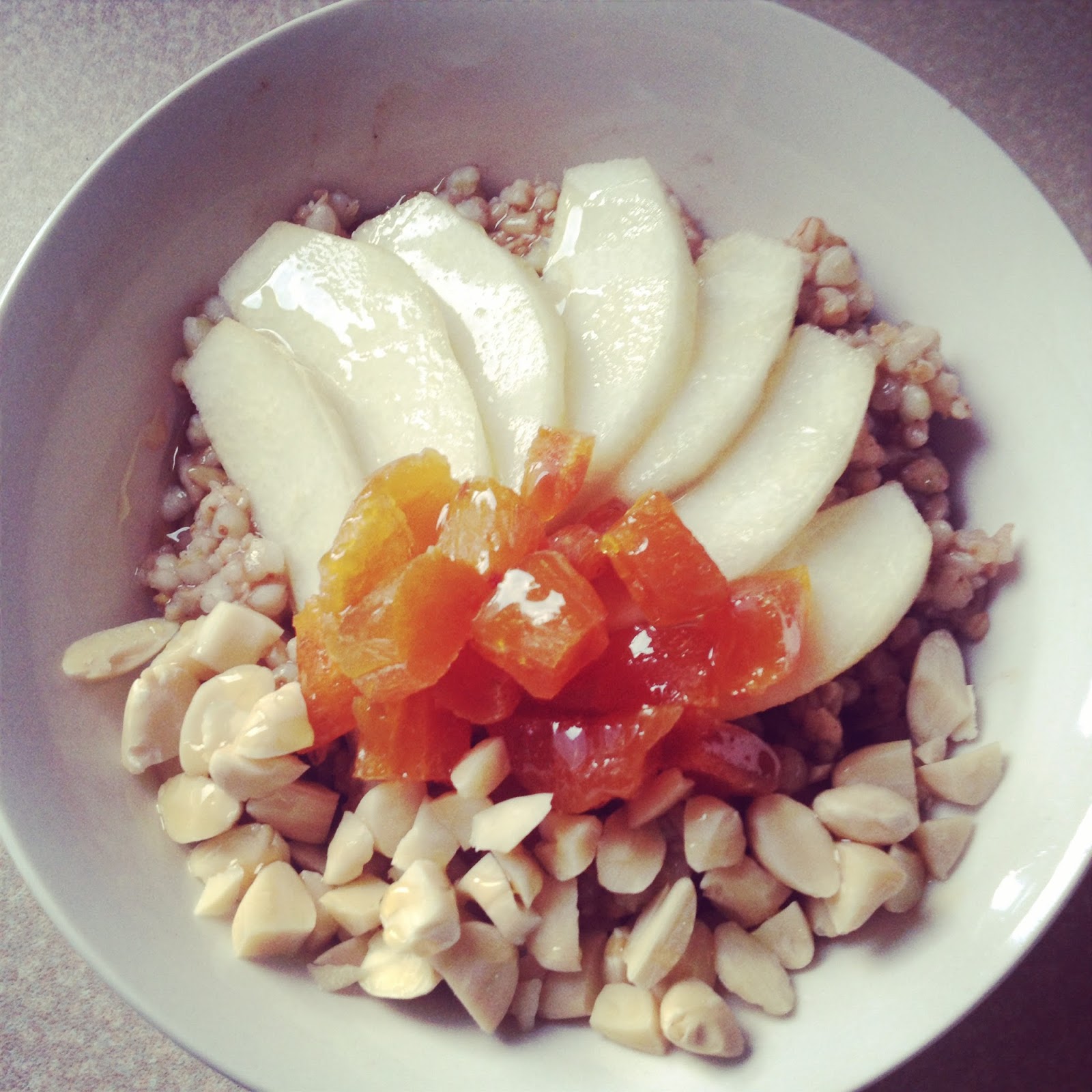 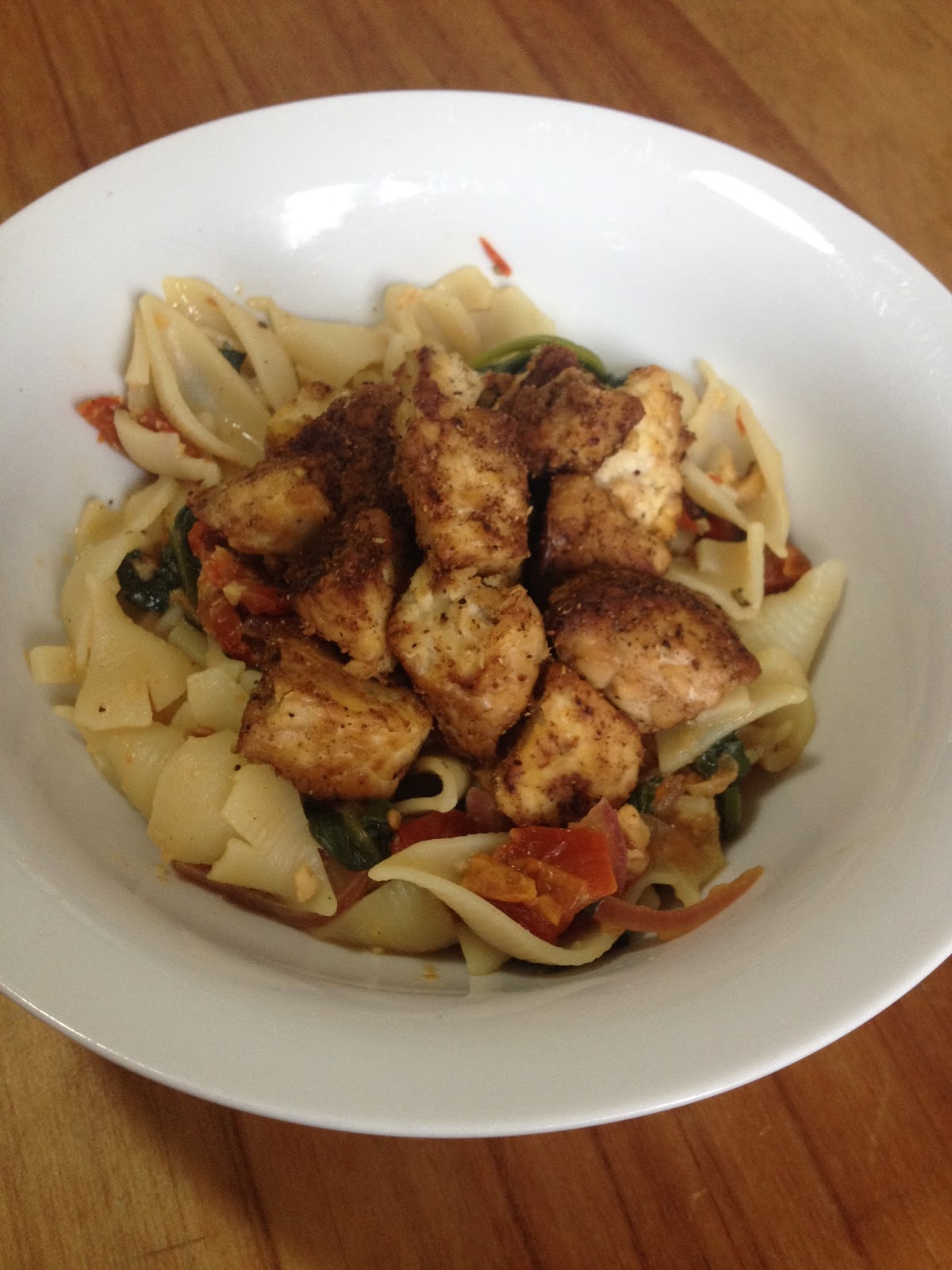 My first foray into the world of fermented foods (which are easier to digest and cause less IBS-type issues) - this was supposed to be tempeh orzilla but I couldn't find any gluten free orzo at short notice, so had to use quinoa shells instead.  Hmmm... Tempeh shellzilla...?

And to finish up, just quietly, in knitting nerd news - I have finished knitting T's ridiculously bright green hoodie and just need to block it and sew in a zip.  Once I find one.  Pictures of the finished product are imminent!  Watch this space ;)