Nailed it!!  We were a little on the slow side, having to wait for one of our party that found it a little tough-going (glad it wasn't me this time!) and taking lots of rest breaks and food breaks, but we completed the run in just over seven hours, with about 5'20" actual running time (by my watch, which actually worked, hurrah!).  We cut the end short by veering off the official track, skipping the gannet colony and taking out about 1km or so, but we were all very happy to arrive at Muriwai Beach car park having run 32.6km with enough time to stop in at the cafe for a cold drink before it shut at 4pm.  Let me just brag a little about the fact that this run was my longest to date in terms of both time and distance.  My previous longest runs were 25km (both an on-road and a trail run), so this was a significant increase.  And you know what?  I feel pretty damned awesome.  Aside from being a little wiped at the end of the evening, going to bed quite early (about 9.30-10pm) I'm feeling good today, and I think I'll head out for a run tomorrow.  There is also talk of an 18km road run on Waitangi Day (this Thursday) to train for the Coatesville half which I may just join in.  But I'm getting sidetracked - let me share pictures and tell you about the awesome Piha to Muriwai run!!

My day started quite early, having set the alarm for 5.15am.  Breakfast was three Weetbix and a fresh peach which, sadly, went through me in record time.  That good ol' nervous IBS stomach was playing havoc again!  I'll admit that the idea of running this distance was freaking me out, especially since there would be 50% more incline to trudge up than on the first run (which, you may remember, I did abysmally).  I packed all my gear and took with me four Shotz gels, two peanut butter sandwiches, a banana and four homemade cashew cookie larabars (which I was planning to share) along with a full two litre bladder in my hydration pack and 500ml tropical nuun electrolyte drink.  The run was estimated to take about eight hours total (which is what they did last Monday) so I wanted to be sure I had more than enough fuel!  Particularly since I'd basically be running on empty - I'm pretty sure my body didn't have a chance of absorbing anything decent from breakfast.

At 6am I headed off towards Muriwai, filling up with petrol in Kumeu, and met Martin and Rob at the beach car park at 7am (and time for another much-needed pit-stop.  Stupid IBS).  We piled into Martin's car and started the hour drive to Piha where we met Kirsten and Erik.  We all slathered on sunscreen, did final gear checks etc, and headed off for our run along Piha Beach at about 8.15ish. 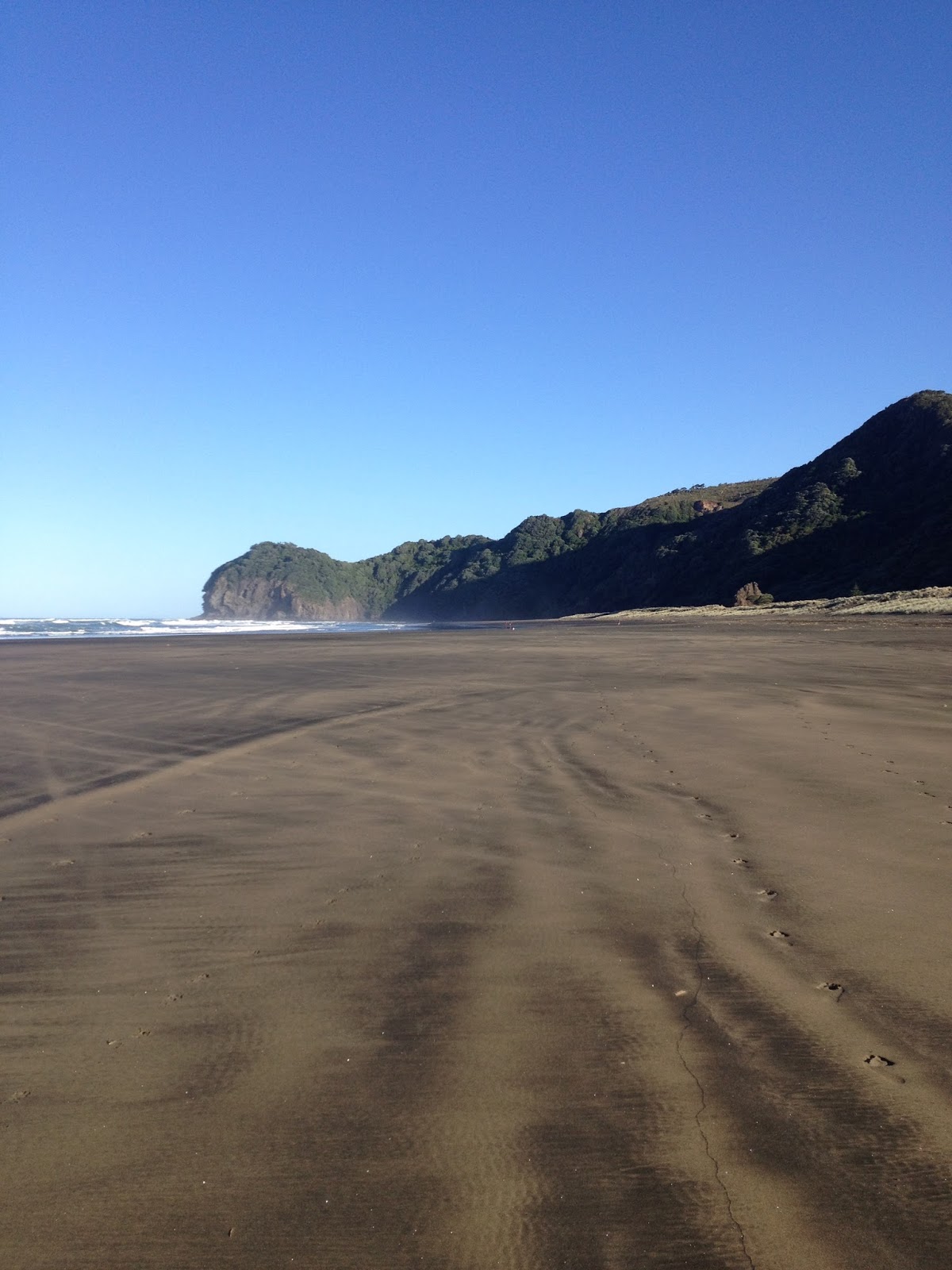 We kinda cheated a little and walked this bit, having established that none of us were particularly fond of running on soft sand.  Once off the beach we started the run proper ;)  So much to see along the way! 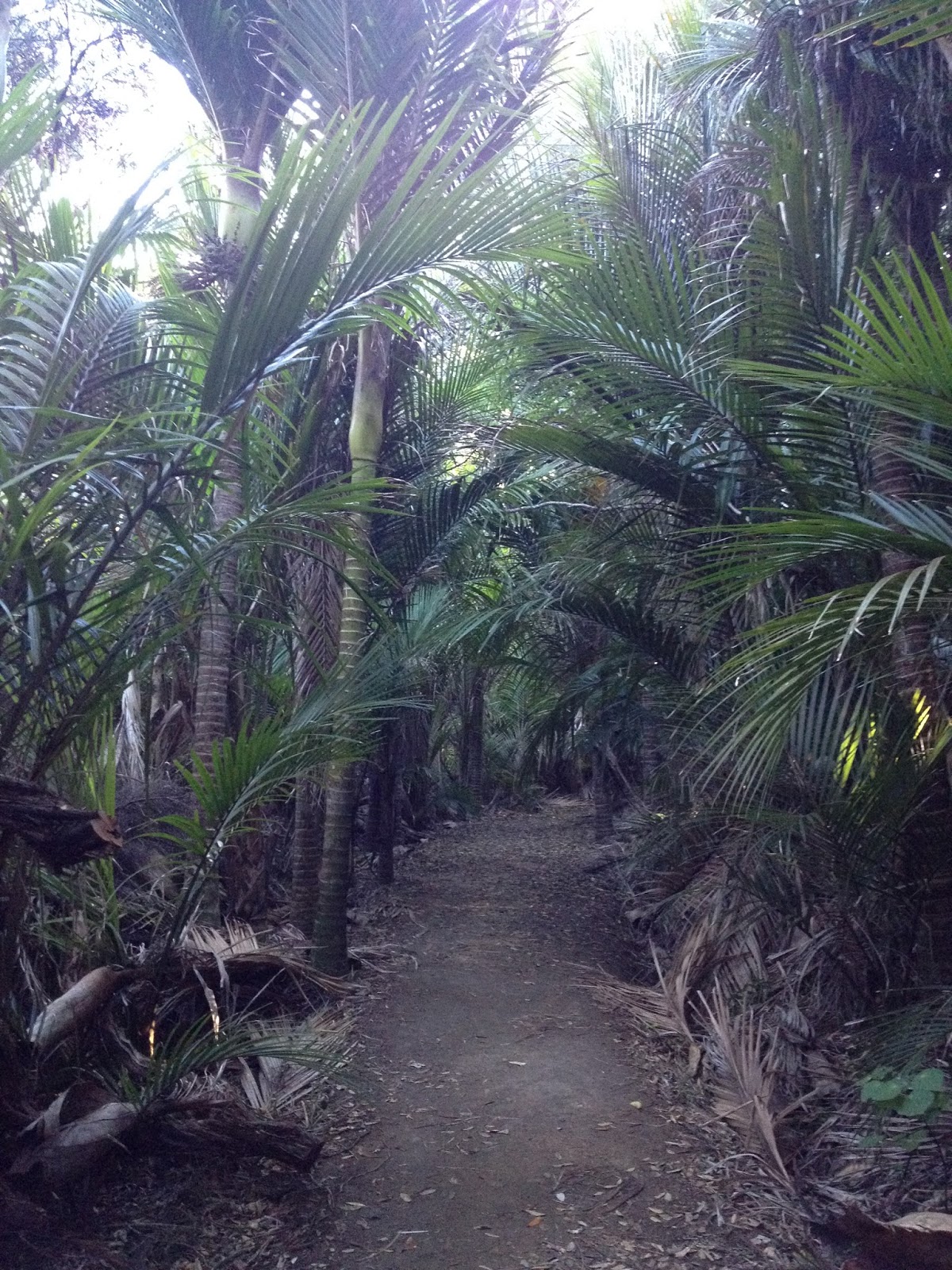 Easy part of the trail

I stopped about 3-4km in to have a gel, just to be sure I wasn't going to crash early.  At about 5km we had a snack break where I downed the banana.  Last run my banana got horribly mushed up and wasn't edible, so this time I decided to eat it first.  Probably a good idea fuel-wise as well. 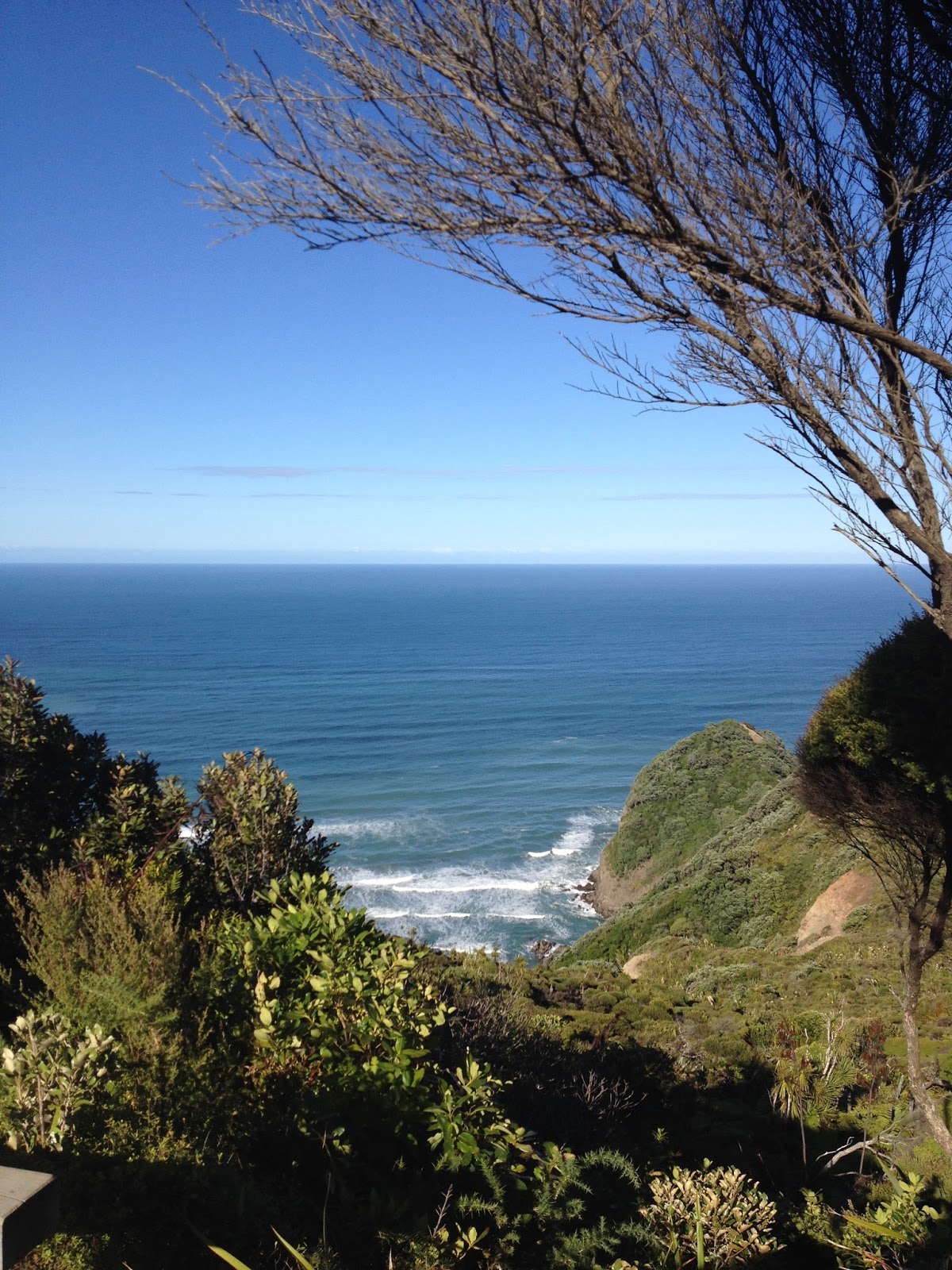 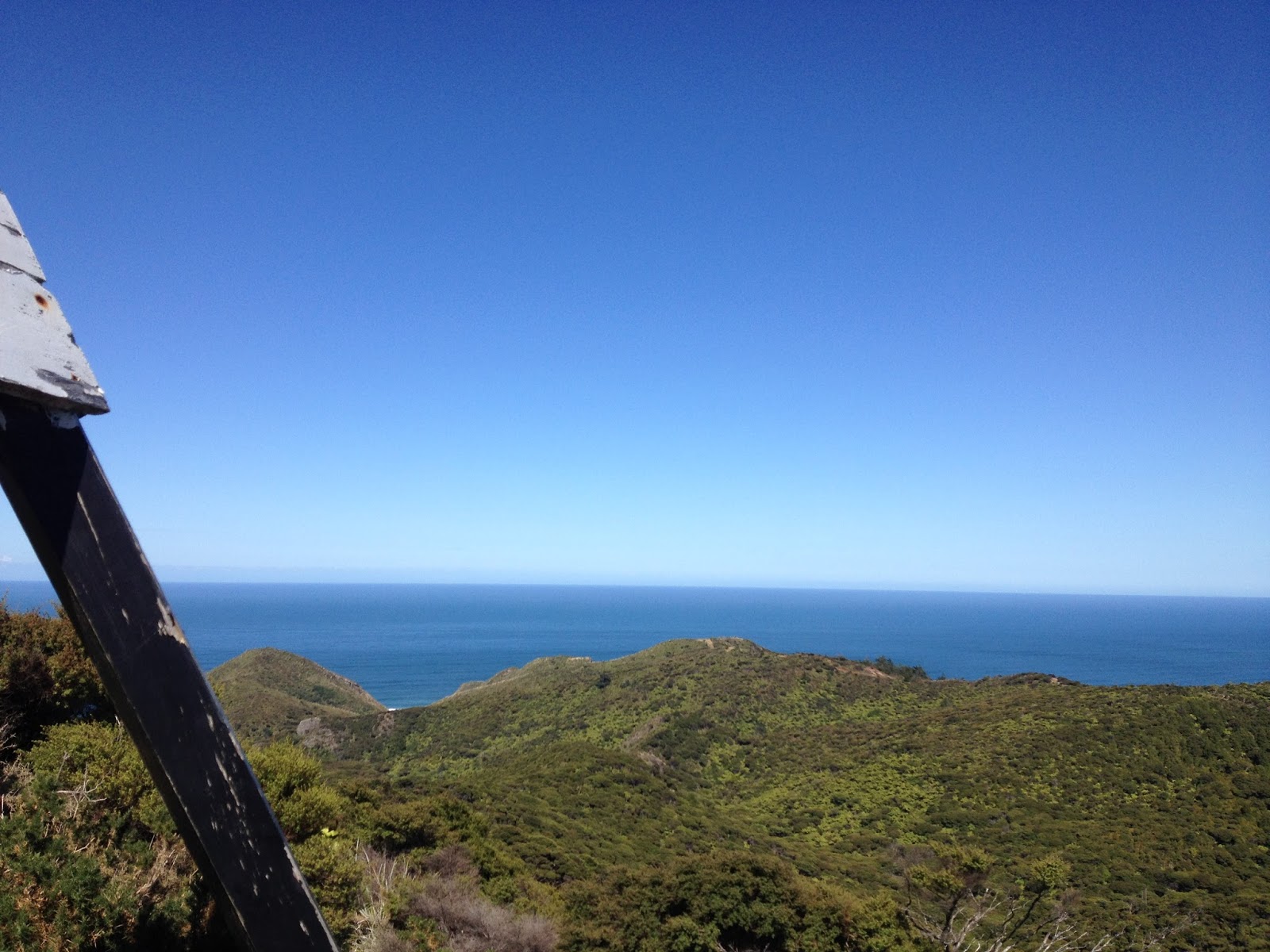 Trig station, and view from.

We stopped at Bethells Beach and had some lunch (in a rather questionable area - next to the toilets at the local surf club.  Mmmm, hygenic...), and refilled our hydration packs.  I hadn't gone through much water, but topped up anyway.  That turned out to be a good decision, because I was left with about 500ml at the end of the run!  Thanks for the sound advice, Martin ;) 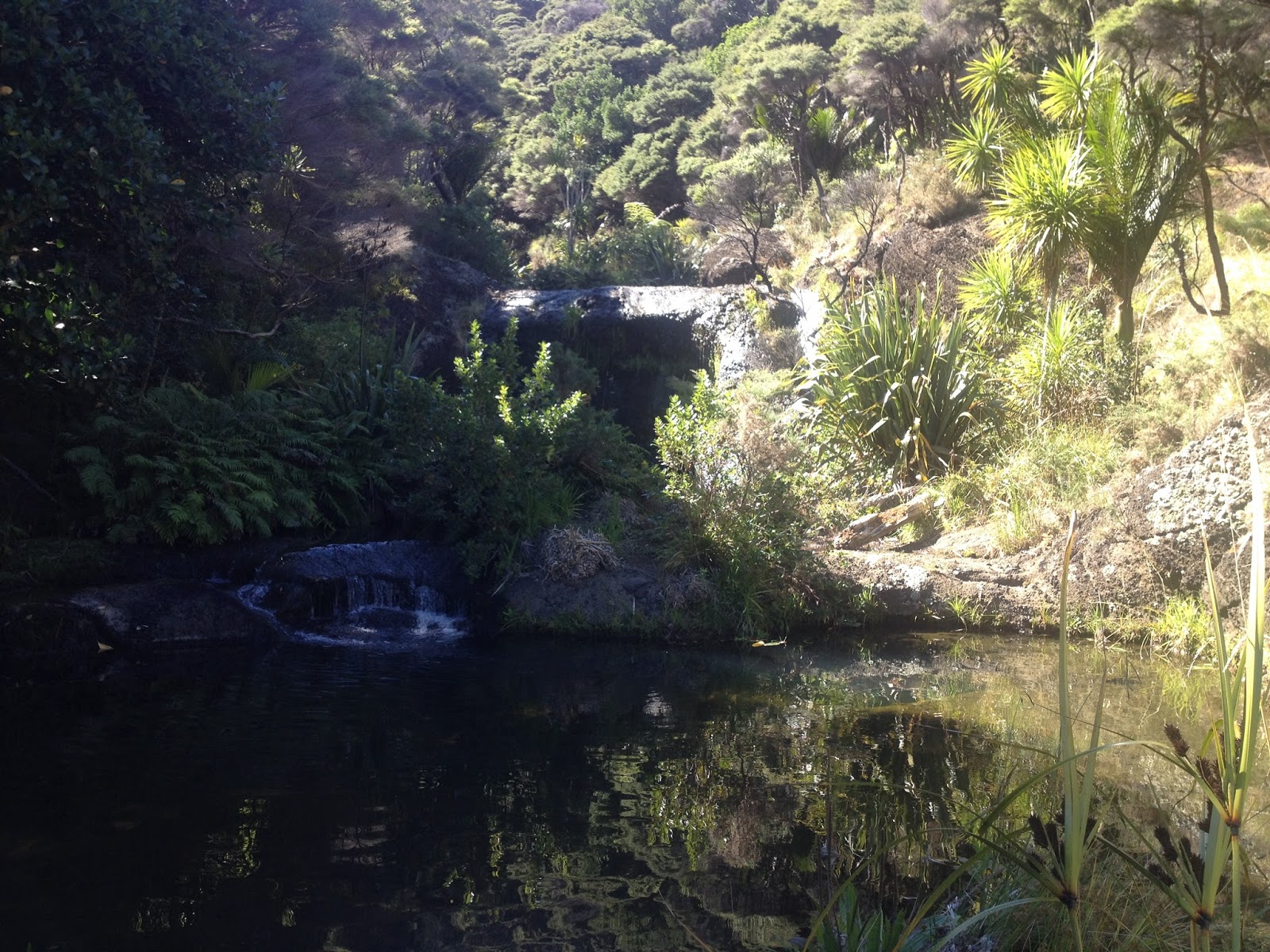 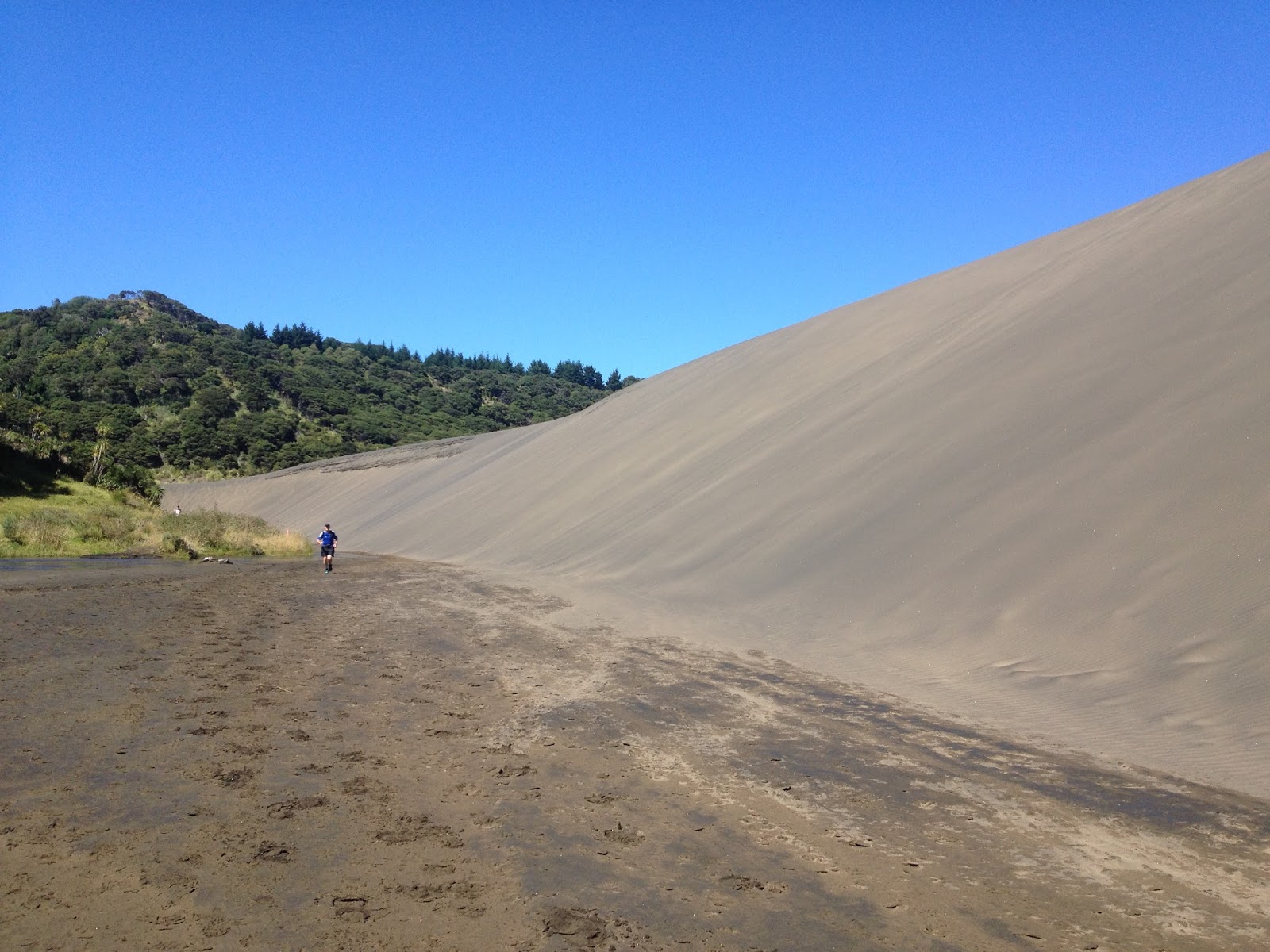 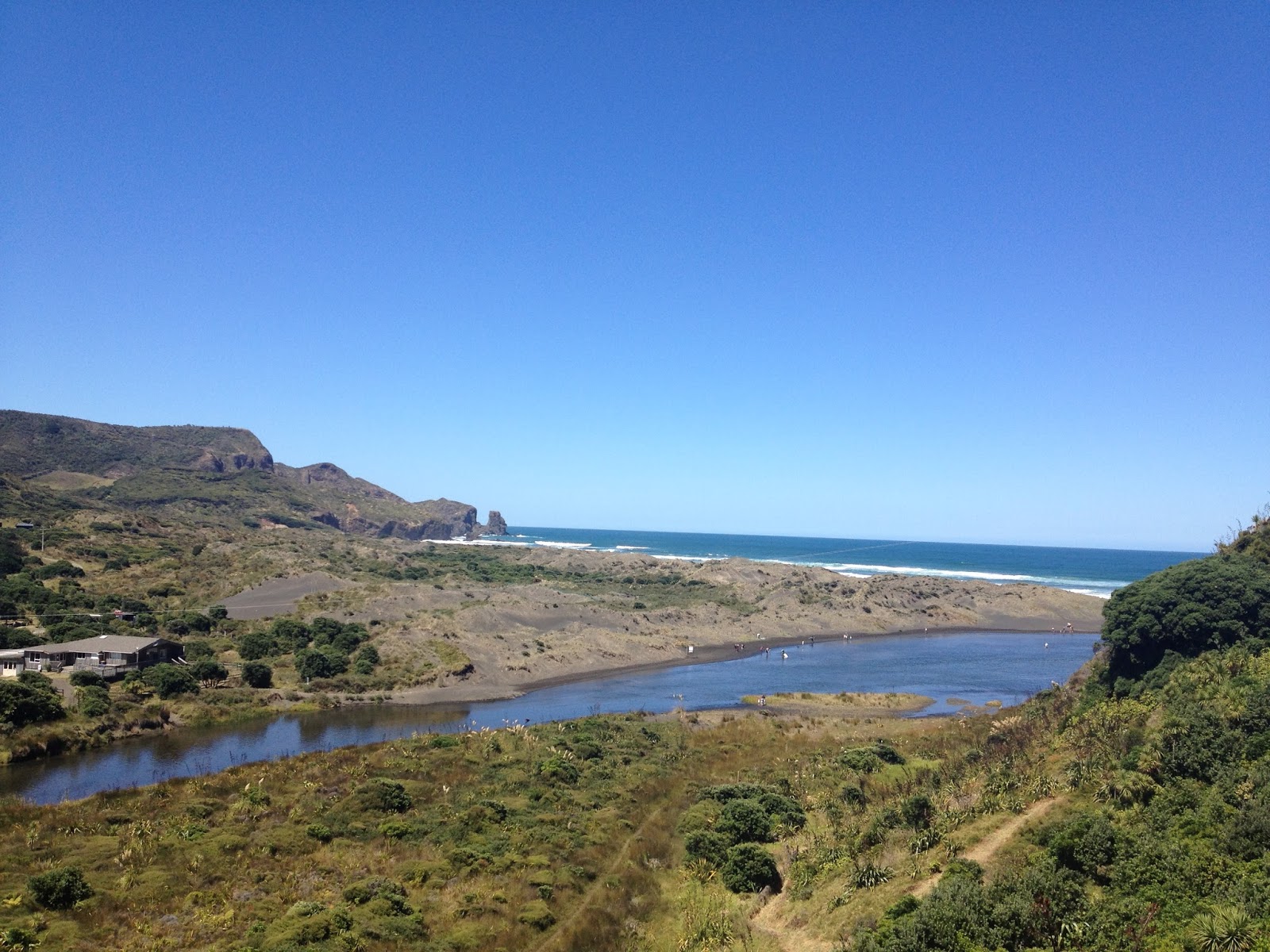 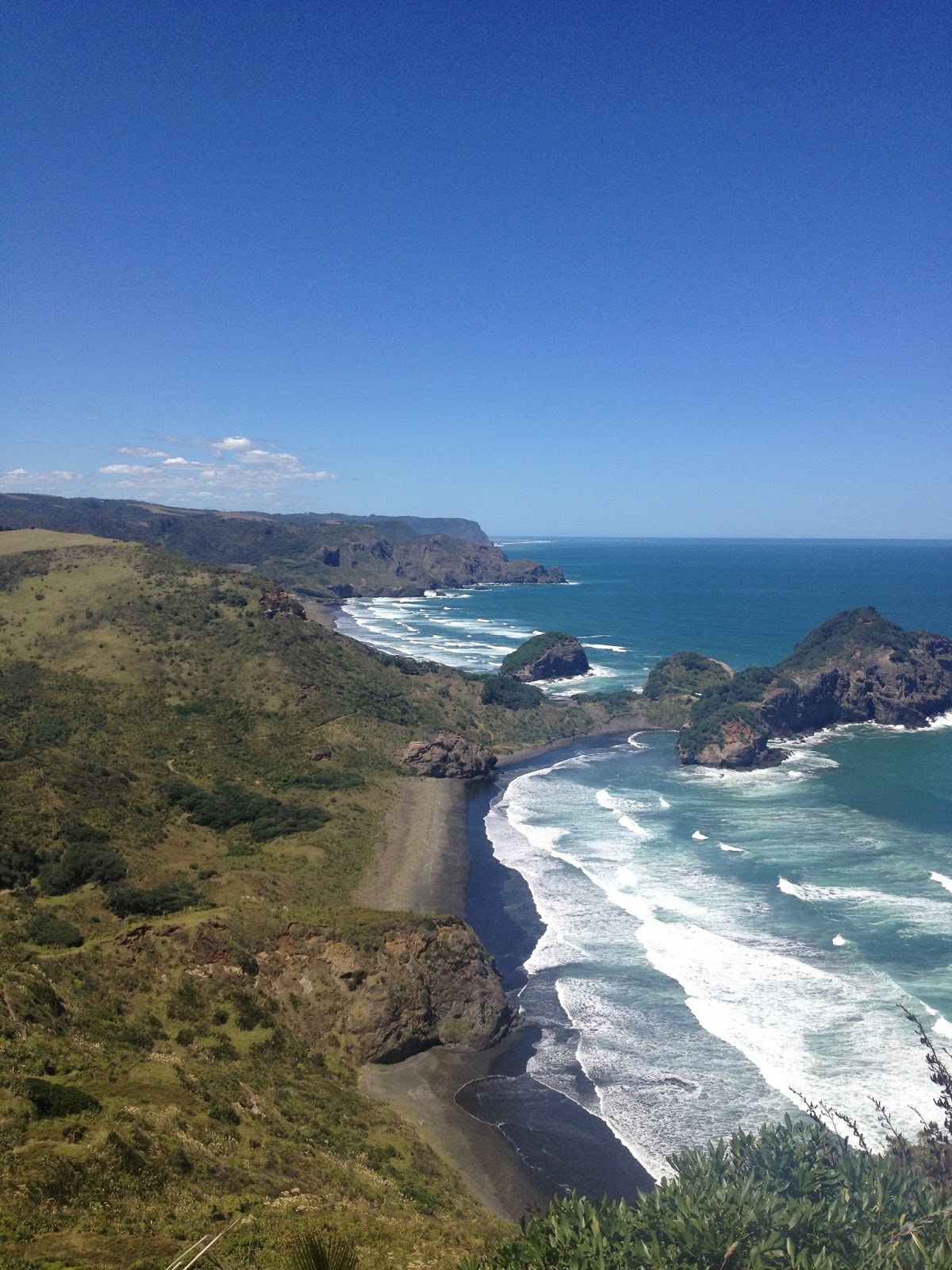 Y'know, I'd love to be able to tell you all about these photos - where I was when I took them, exactly what area of the track is in the photo, the view etc etc, but to be honest my memory is shite.  I have absolutely no idea where I was in terms of what track we were on, how far into the run, anything.  I'm hopeless!  Having said that, I'm pretty sure we were near the beginning of the Te Henga Walkway when I took the above photo, and I know for a fact that the next two were on the Te Henga Walkway: 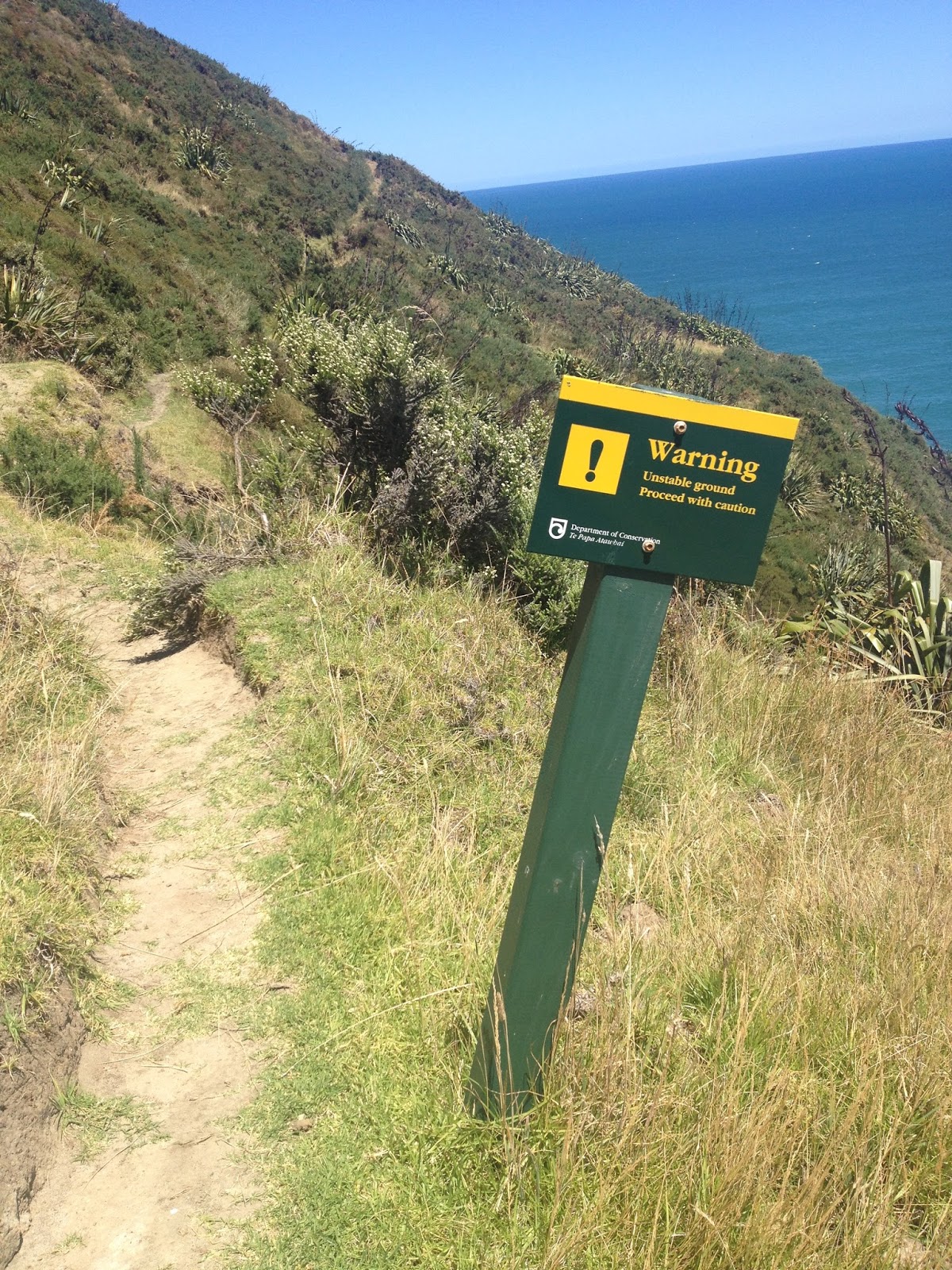 This one made me lol - the track had been really narrow with questionable clumps of grass to the left that were likely to send you hurtling down the cliff if you stood on them, and here's this sign warning of unstable ground.  And it's on a lean!  I have mentioned before that I find the strangest things amusing when I'm well into a long-distance run, right..? 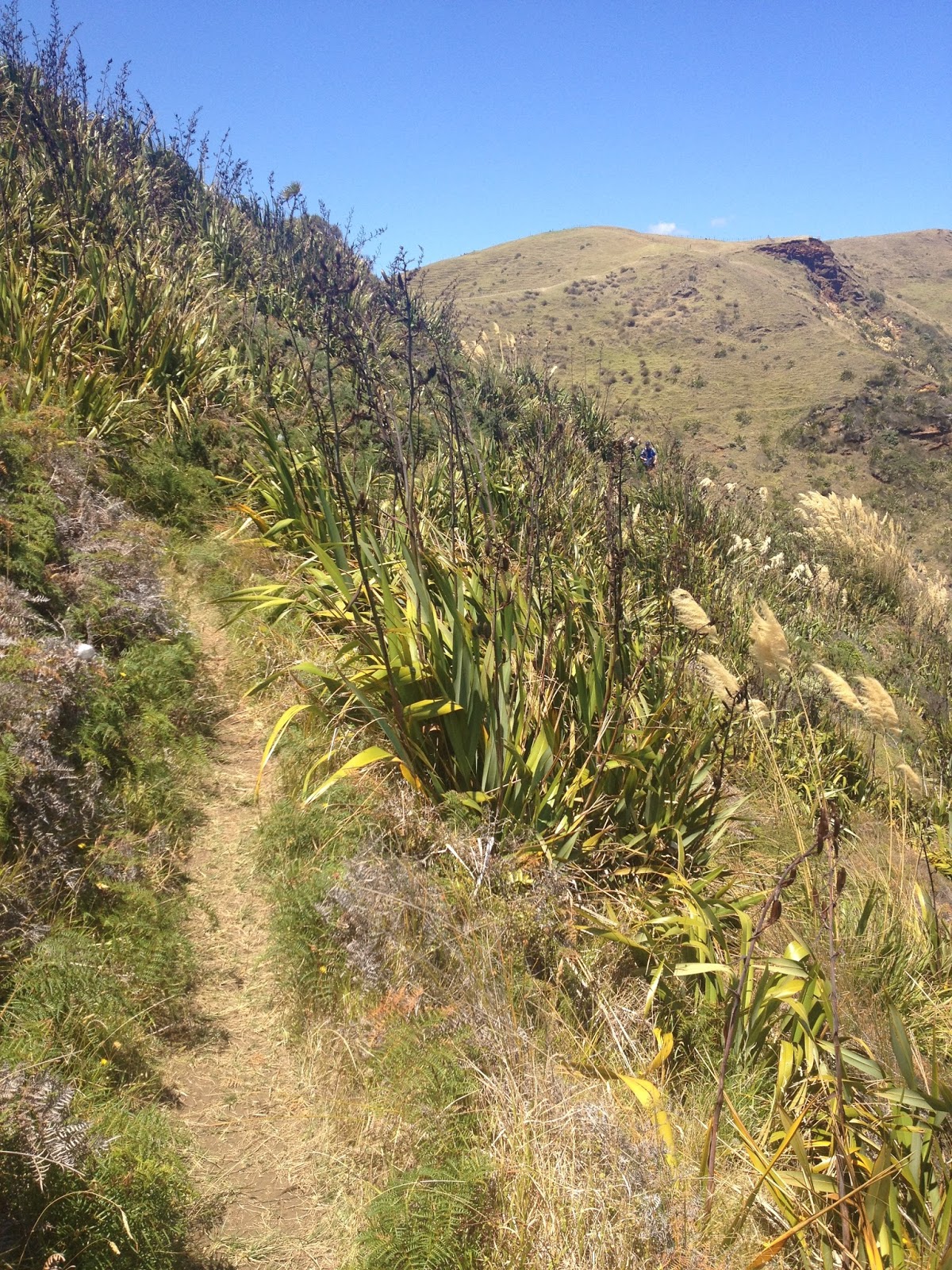 In this one you can see parts of the trail winding around the hillside in the distance, and you can just see Martin and Rob making their way along another part of it, probably navigating one of the narrower parts.  You can see the offending dodgy grass patches in the foreground of the picture. 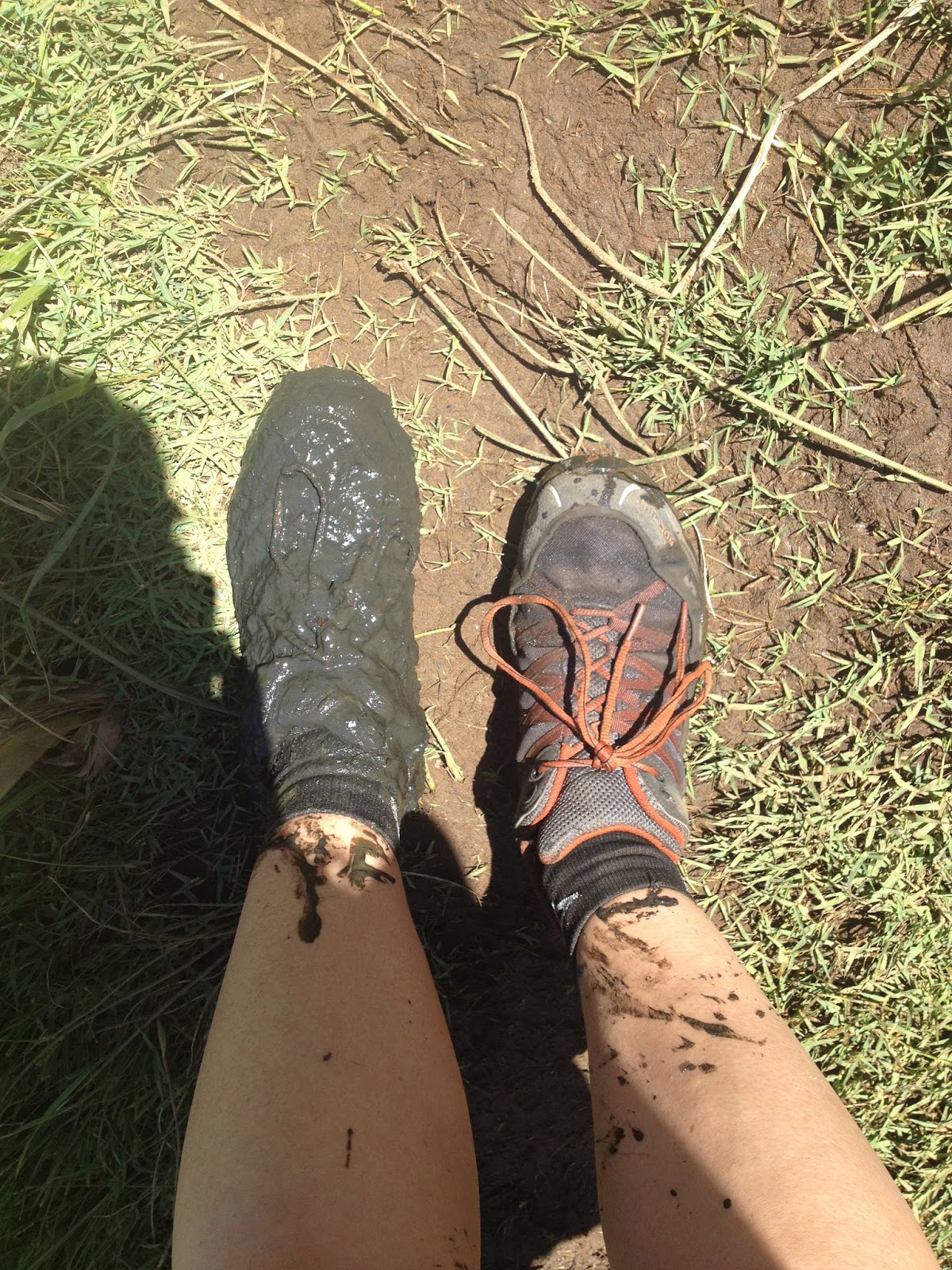 Evidence that I do get rather muddy at times - I misjudged the depth of a mud puddle on the Te Henga Walkway and ended up ankle-deep!  Oops...  I believe my expletive at the time was a very loud 'ah, bugger it!'.

We met many trampers along the way, and a few runners going the opposite direction.  It was such a lovely day I'm not surprised.  There was plenty of birdsong to enjoy in the heavier wooded areas, which is something I always love hearing.  Here though, there wasn't much in the way of birds.  Instead, we met a hardy local who was out with his gardening tools chopping back some of the gorse bush.  Bless him.  We stopped for a break and complained ad nauseum about the gorse: 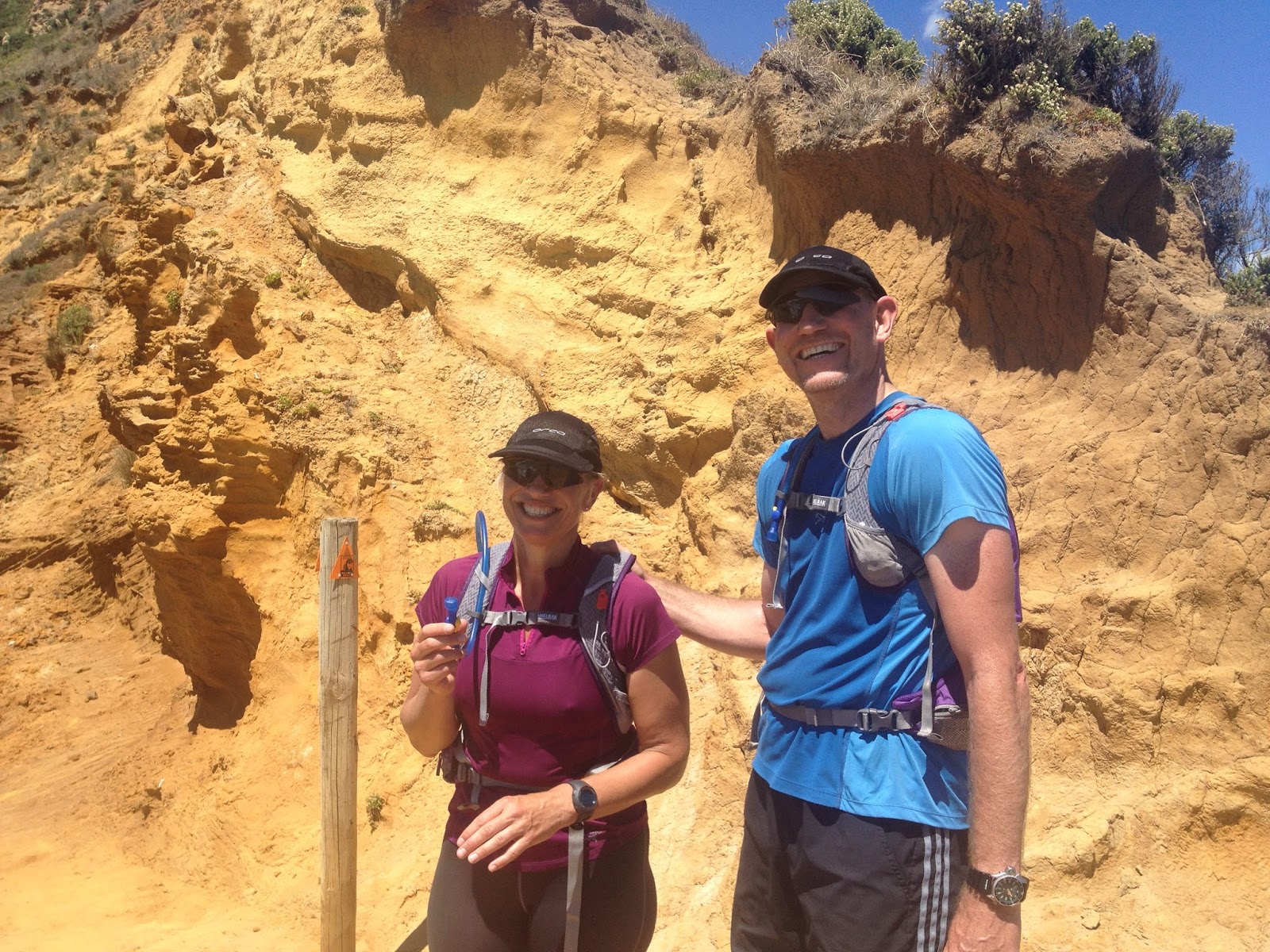 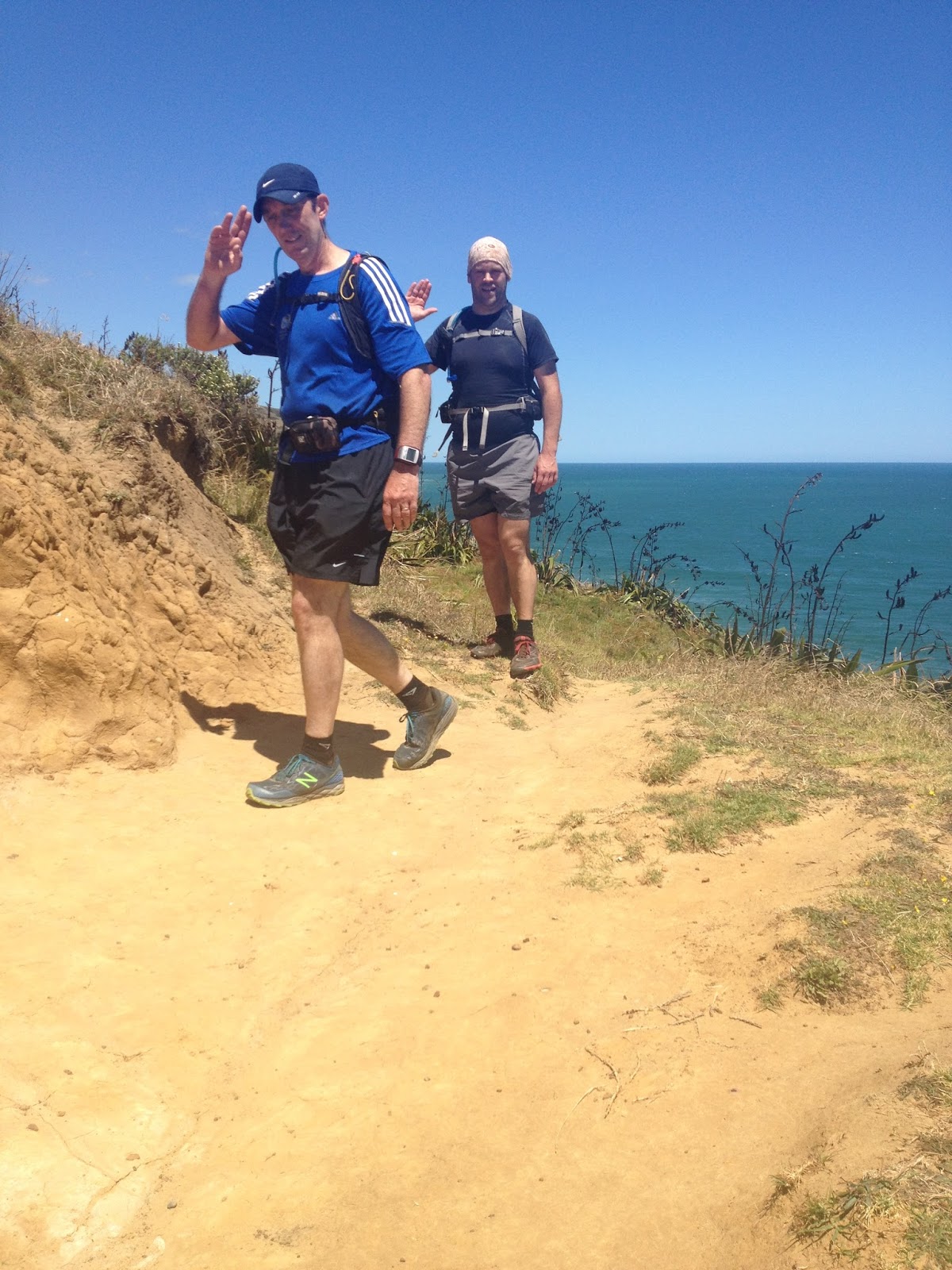 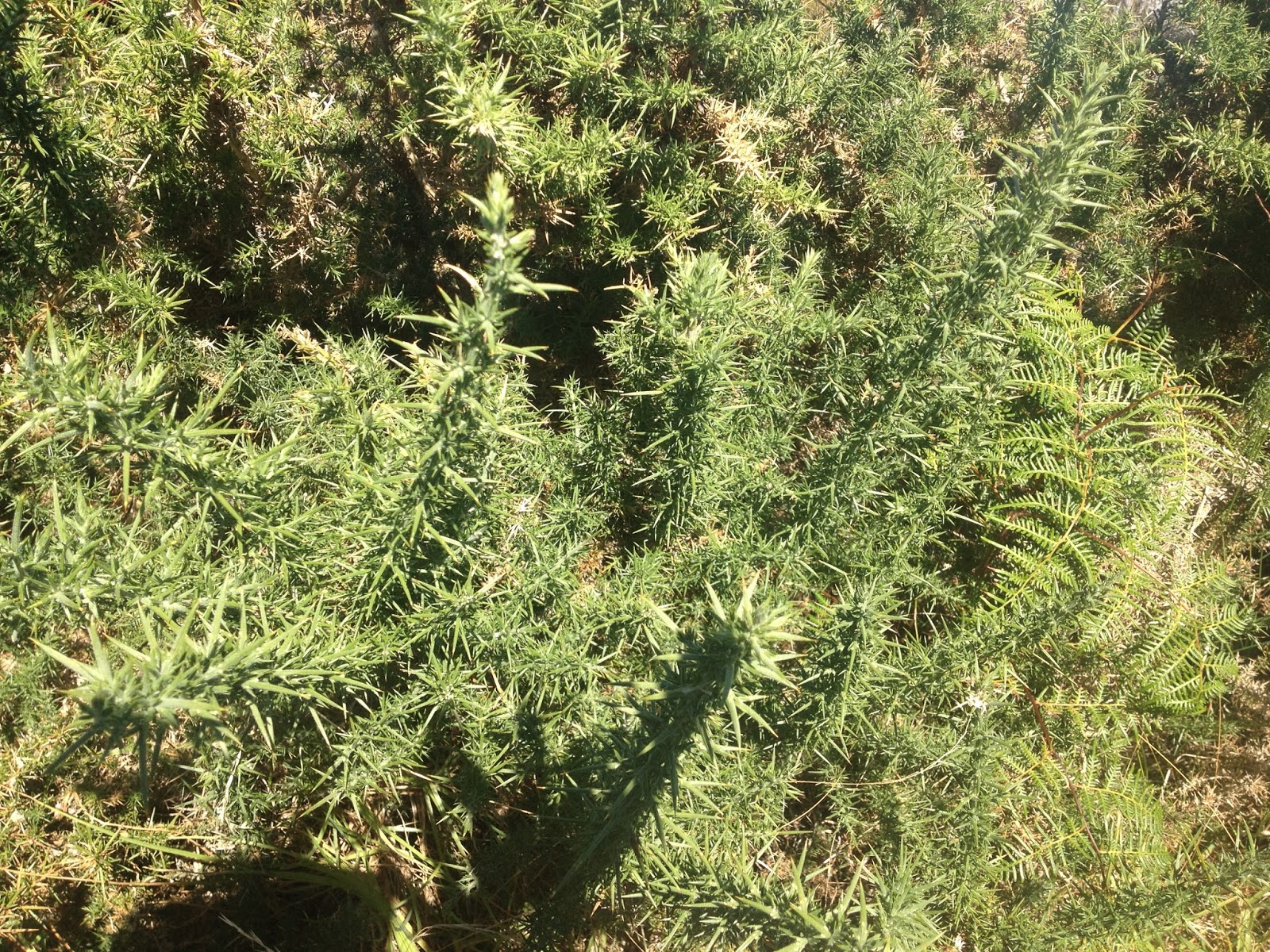 Up close and personal with the evil, evil gorse.  Stabby. 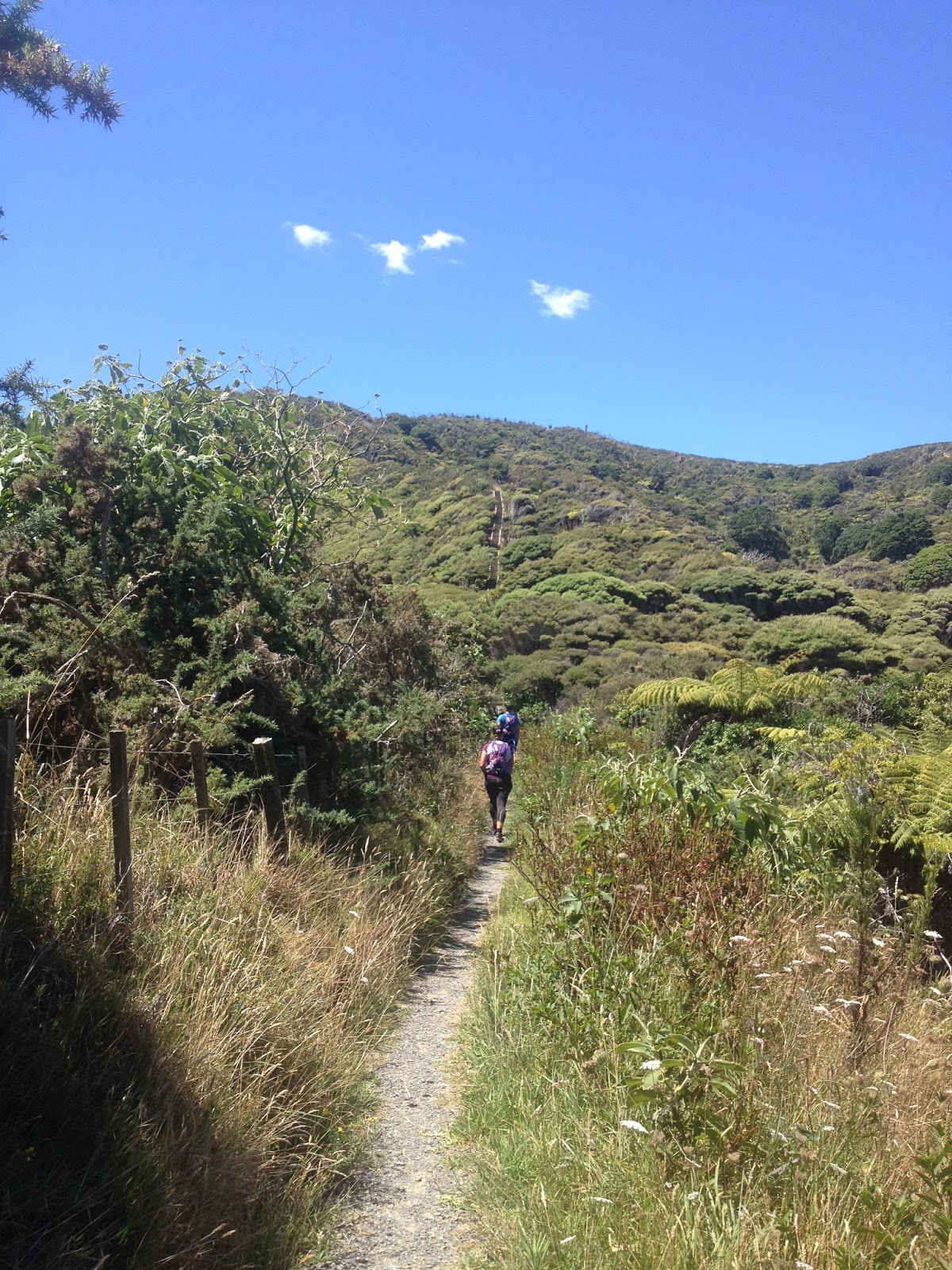 Nearing the end of Te Henga Walkway, you can sort of just make out the stairs in the distance. 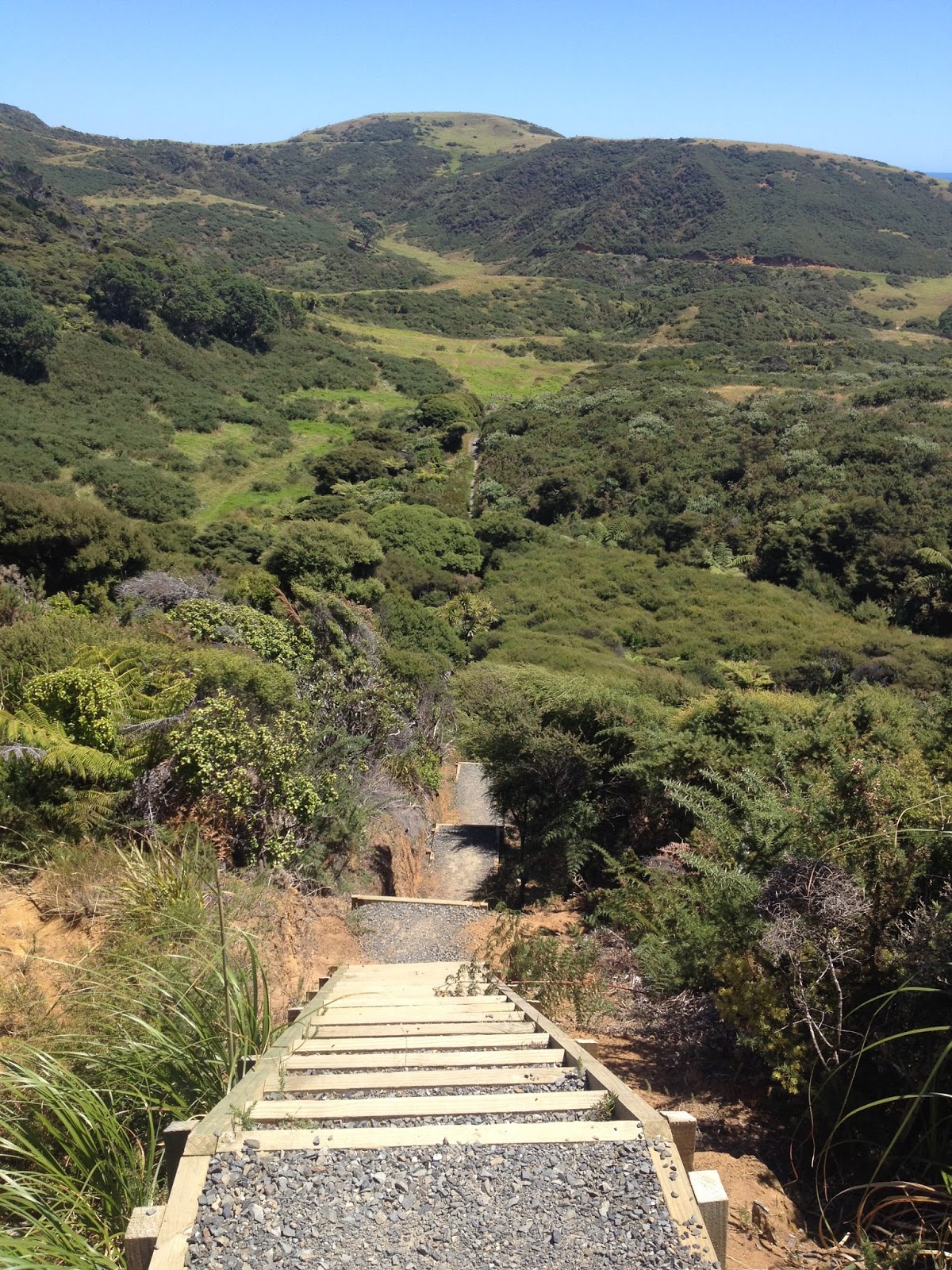 The view back down to the track, some 235-odd stairs later... 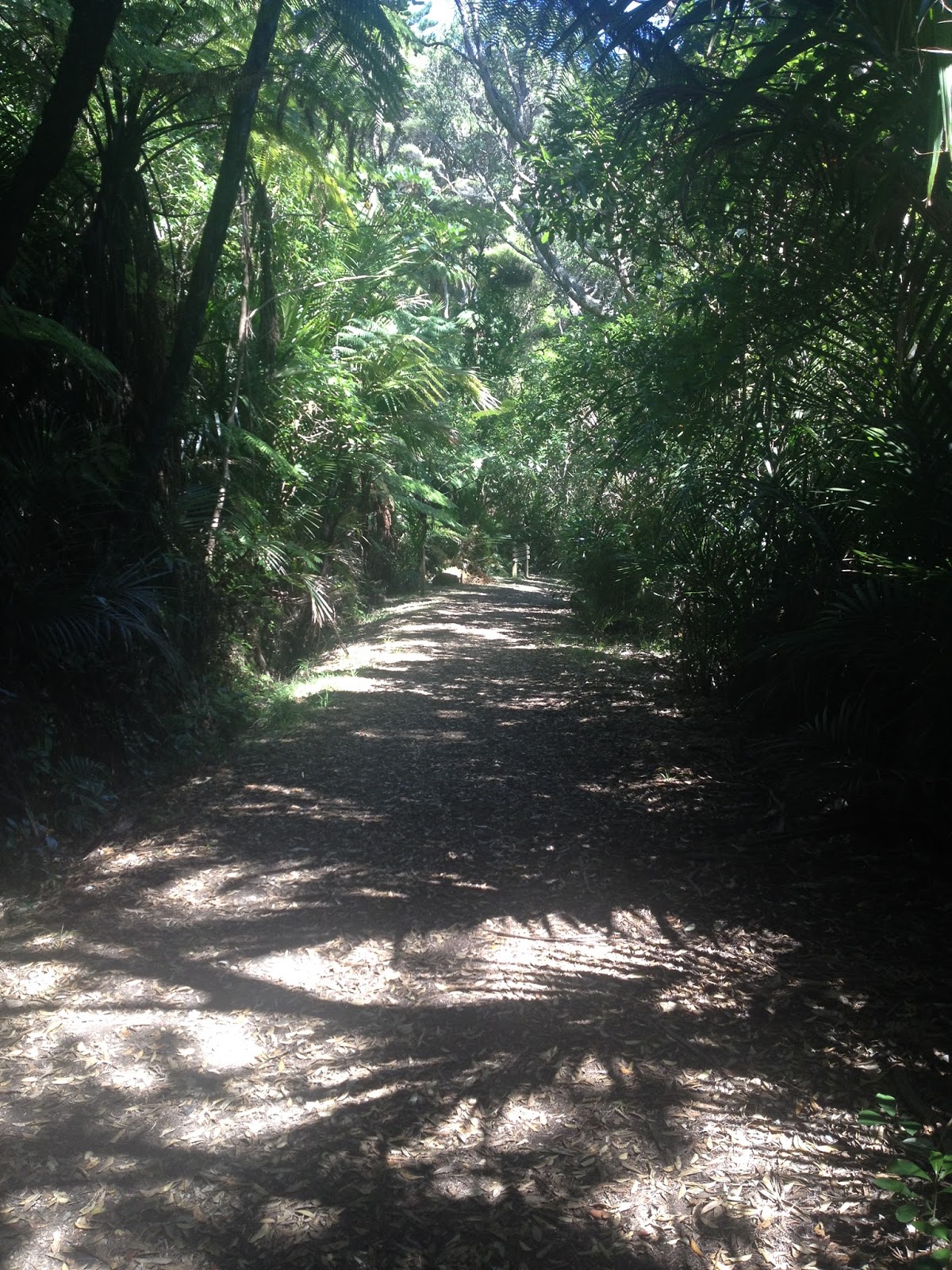 On the home stretch! 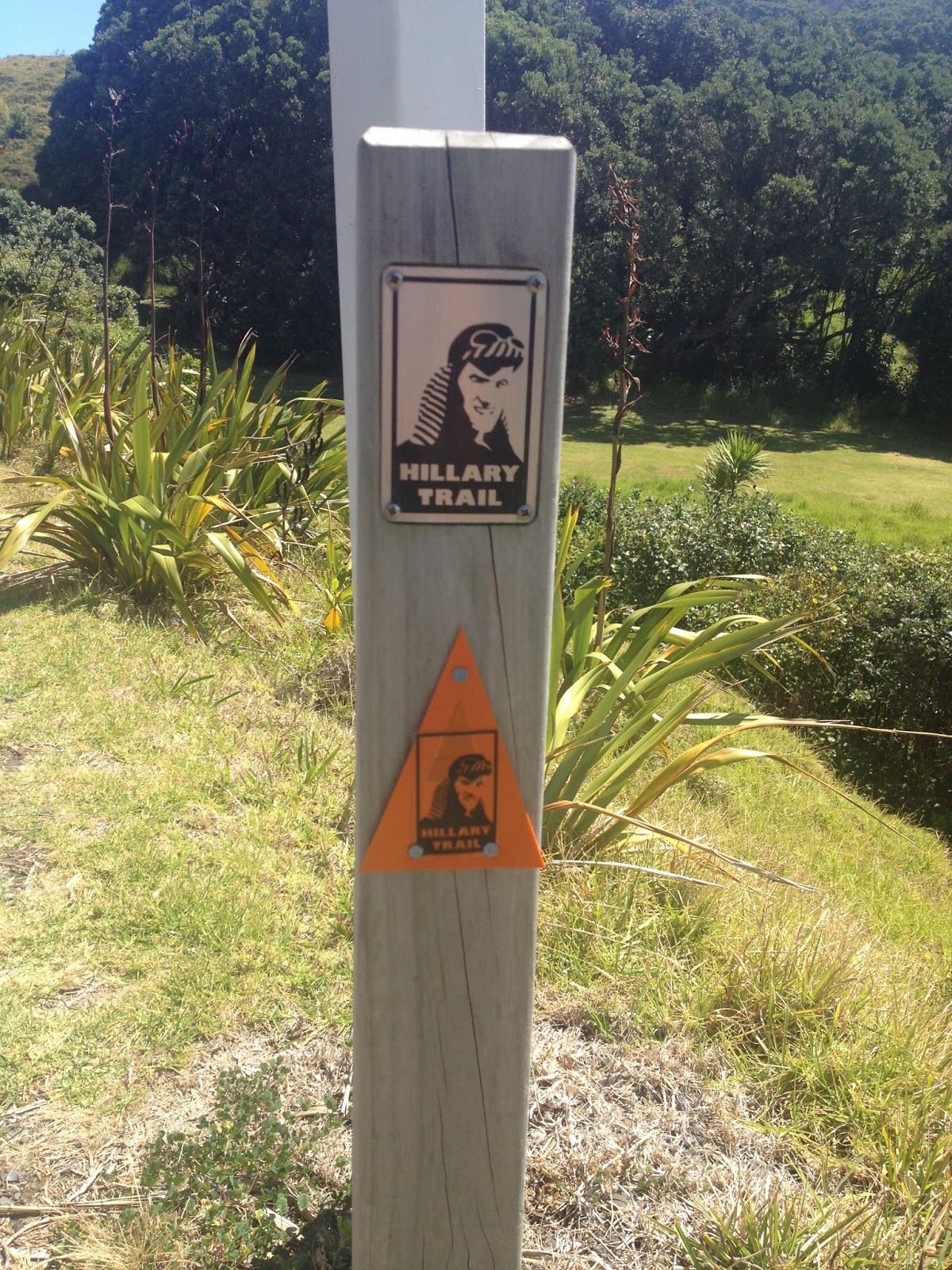 This is the end, beautiful friend (cheers Jim Morrison.  And thank you very much Sir Edmund Hillary, you amazing, brilliant, wonderful man)

High fives all around!!!  We had done it!  All of us had completed, in three parts, the Hillary Trail.  Martin had done it twice over, having led the two different groups for each section.  I'm really stoked to have completed it, and would like to go back some day to re-run Arataki to Whatipu.  That Karamatura Track needs a good ass-kicking as payback for the first round ;)

Happy happy happy!!!  And my over-stocking of eats for the run turned out to be a good idea - all I had left was one larabar (Martin scoffed one, I had the other two) and a gel.  All the rest was consumed.  I had energy to burn!  And thankfully, my tummy behaved itself for the duration of the run.  Awesome.  What an excellent way to spend a Sunday :)
Posted by kreachr at 14:39