As much as I adore getting out onto the trails and running off-road, that's not always possible.  I don't have many people to run with, and I'm not allowed to run them alone.  To be honest, I probably wouldn't anyway.  I'd be likely to get horribly lost and end up freezing and/or starving to death in less than 24 hours.  Yes, even in the middle of summer.  With civilisation less than ten kilometres in any direction.  My survival skills are zero.  Luckily, there are still lots of great places to run here in the city.  There's no chance of getting bored.  Running the same route every week and getting a bit tired of the view?  Go somewhere else!  It's that simple :)  I went for a run earlier last week that I hadn't done for a while, around Herne Bay/Westmere/Grey Lynn/Ponsonby areas.  Not quite west coast standards, but still pretty: 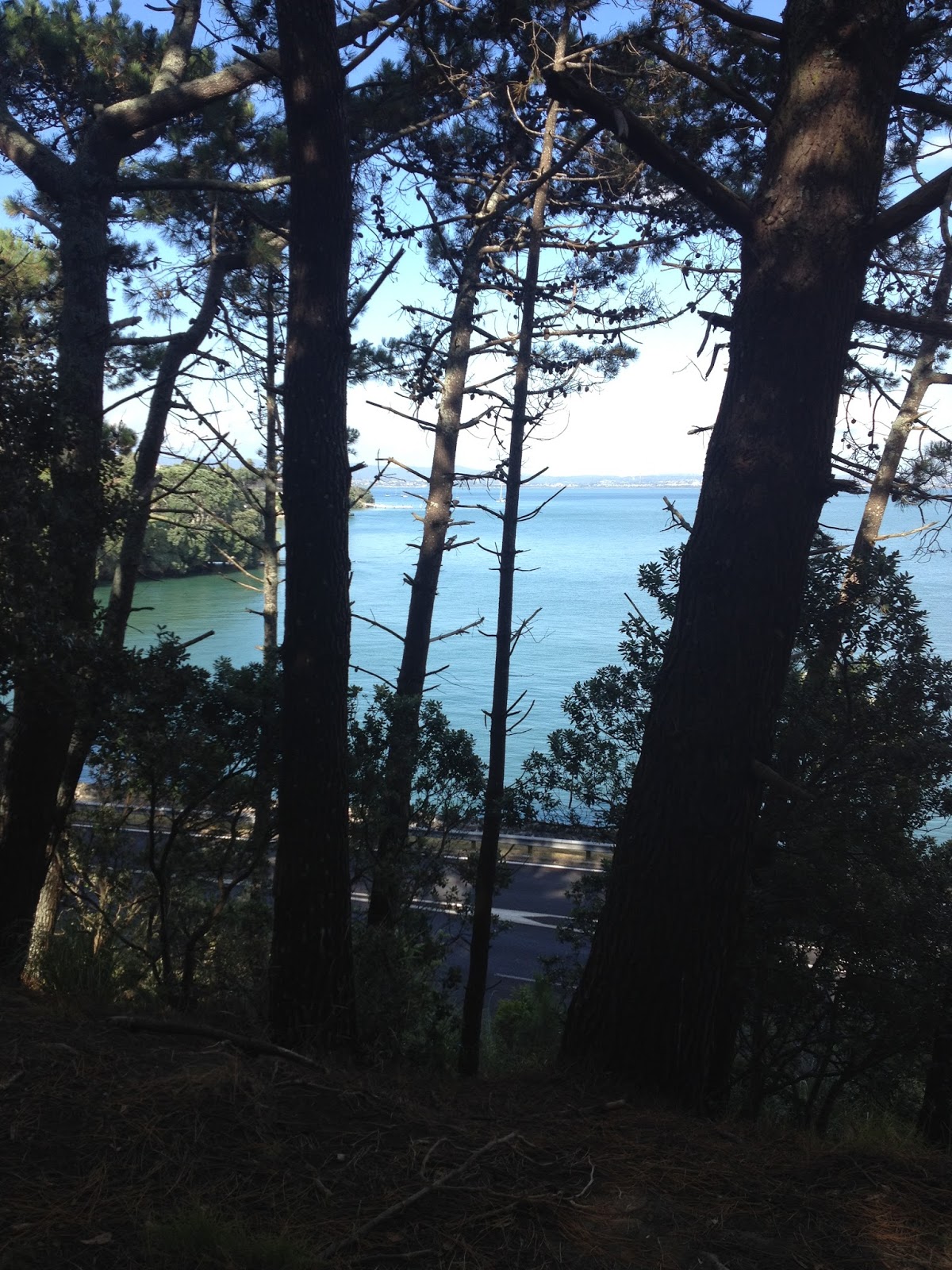 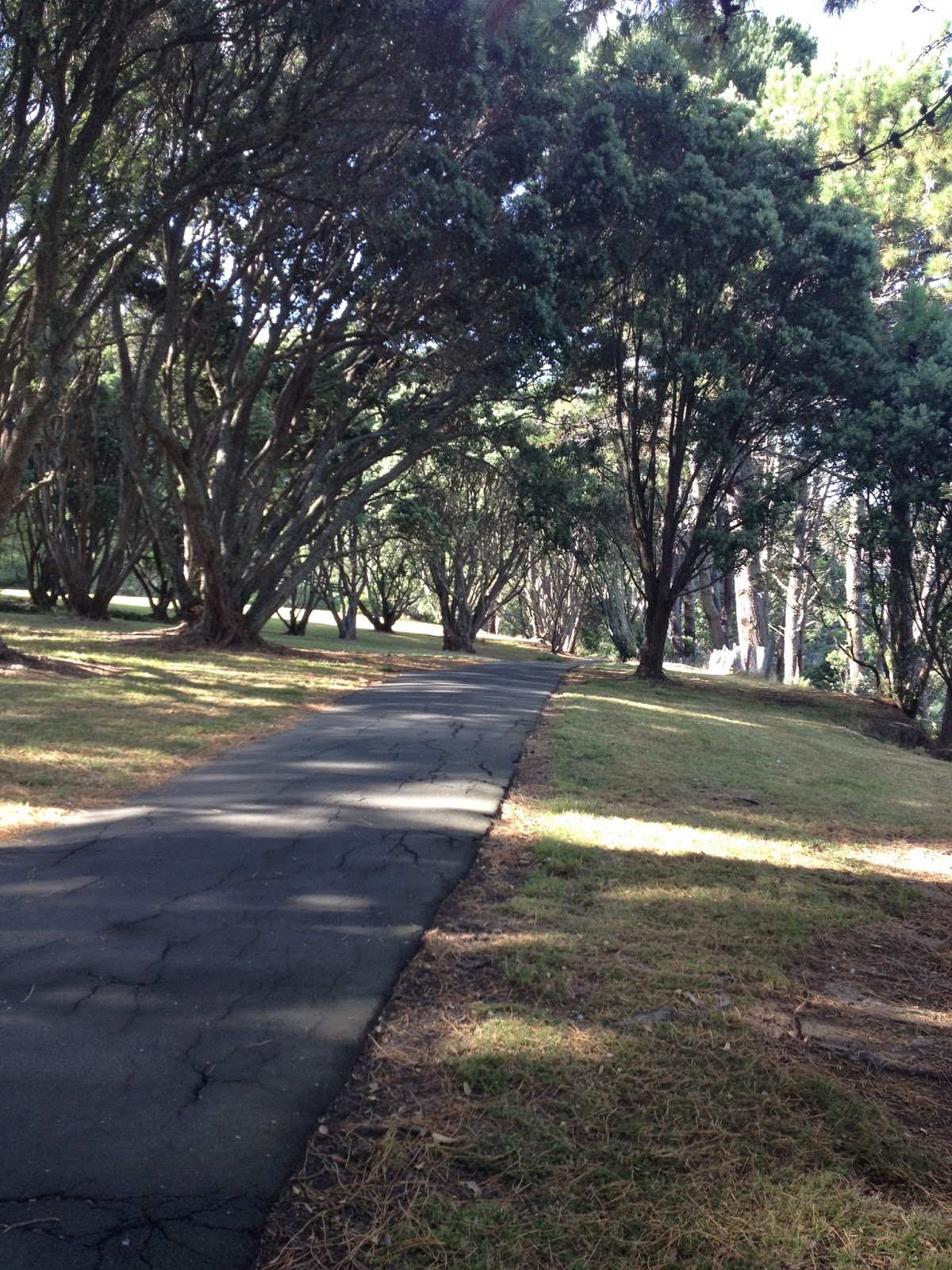 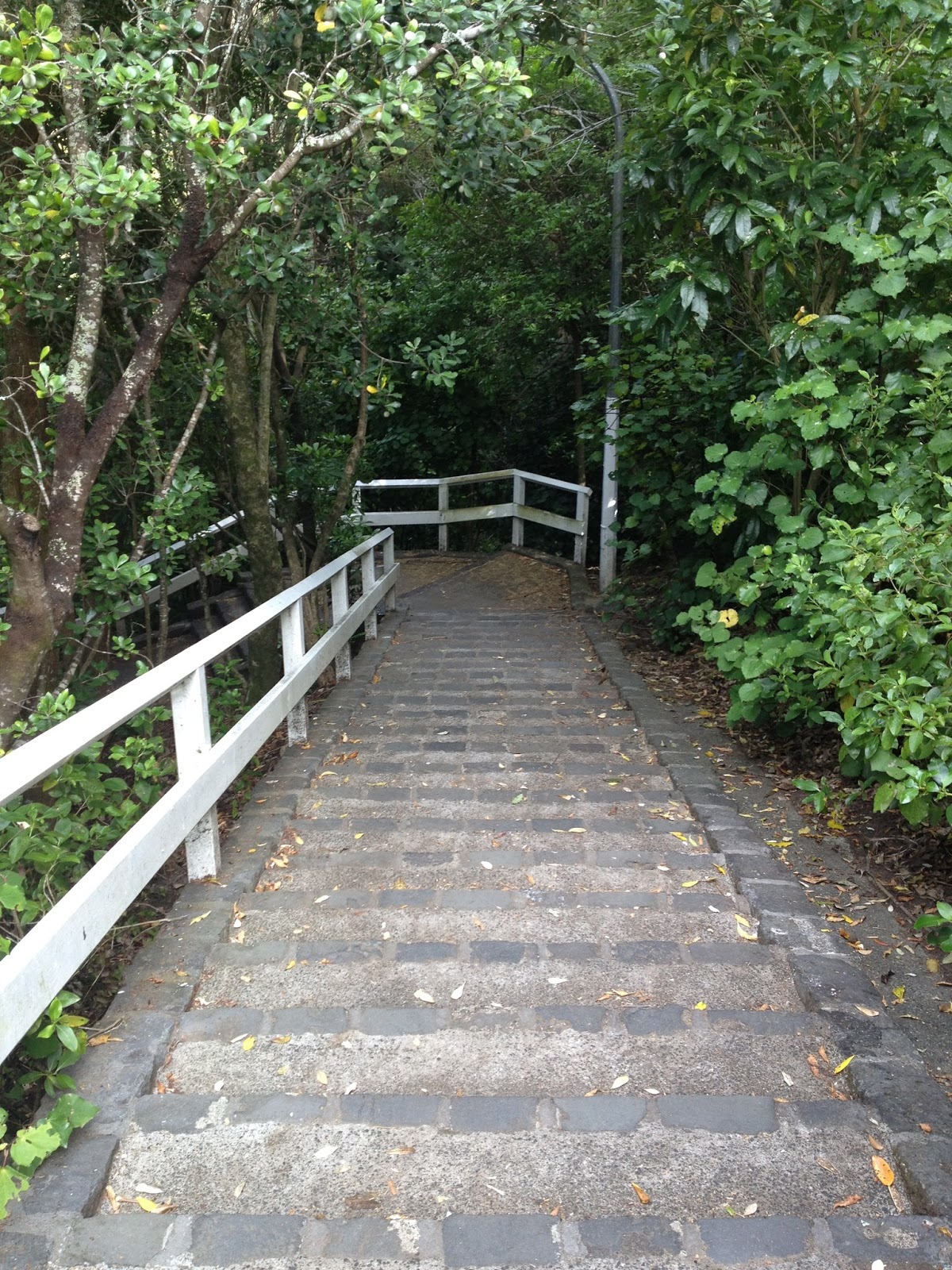 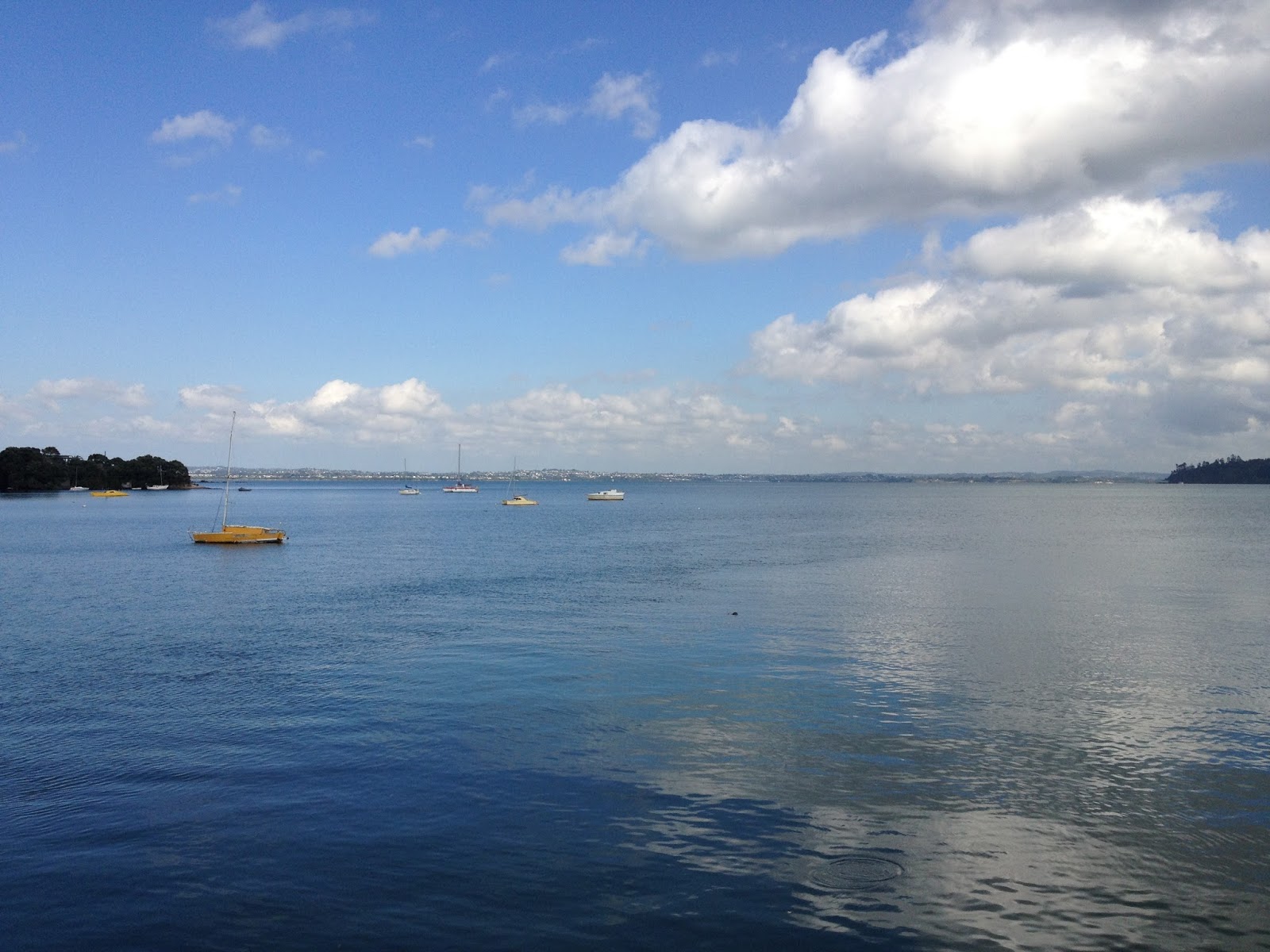 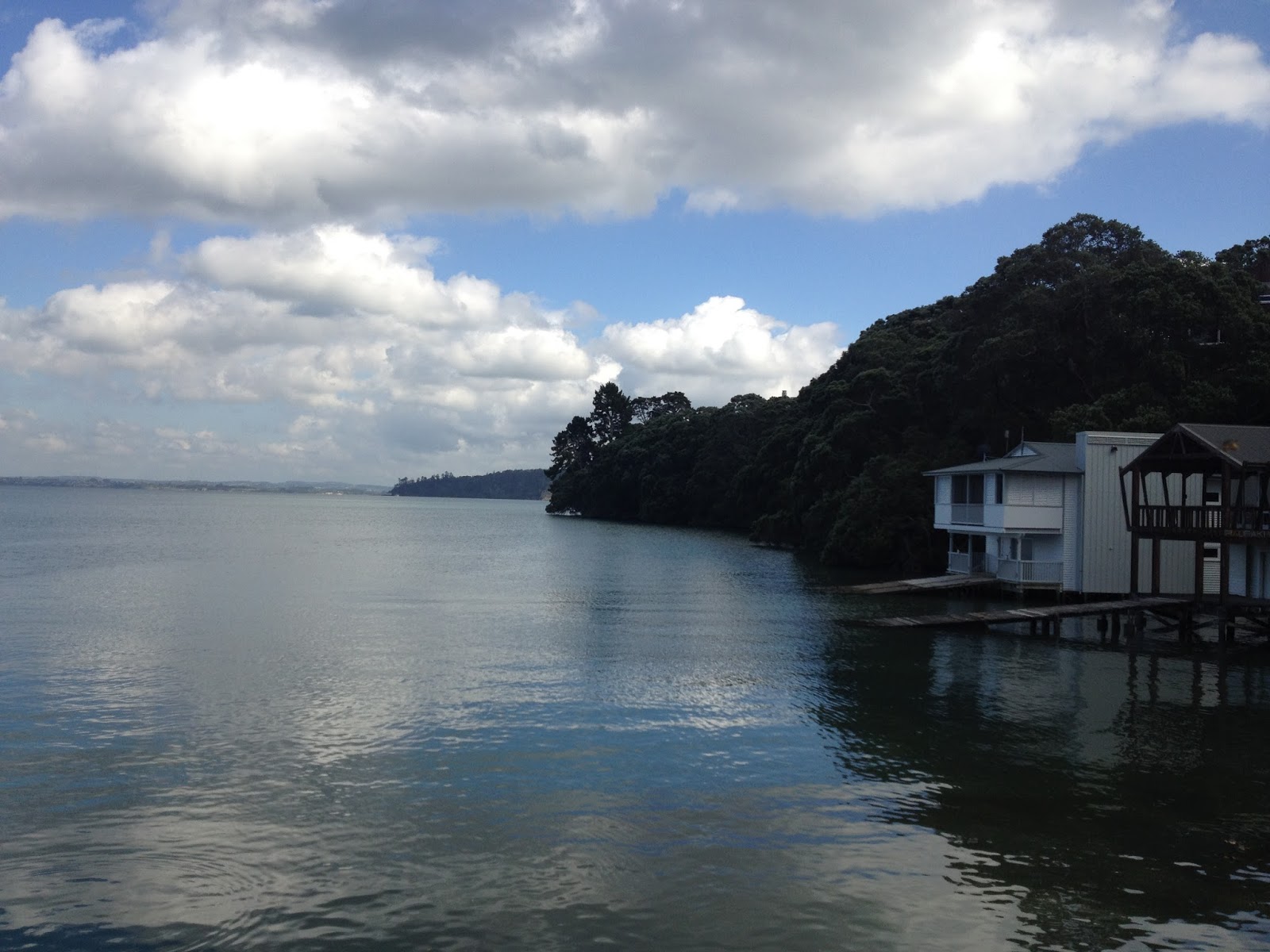 I even took a different path through the park and saw some stuff I hadn't seen before: 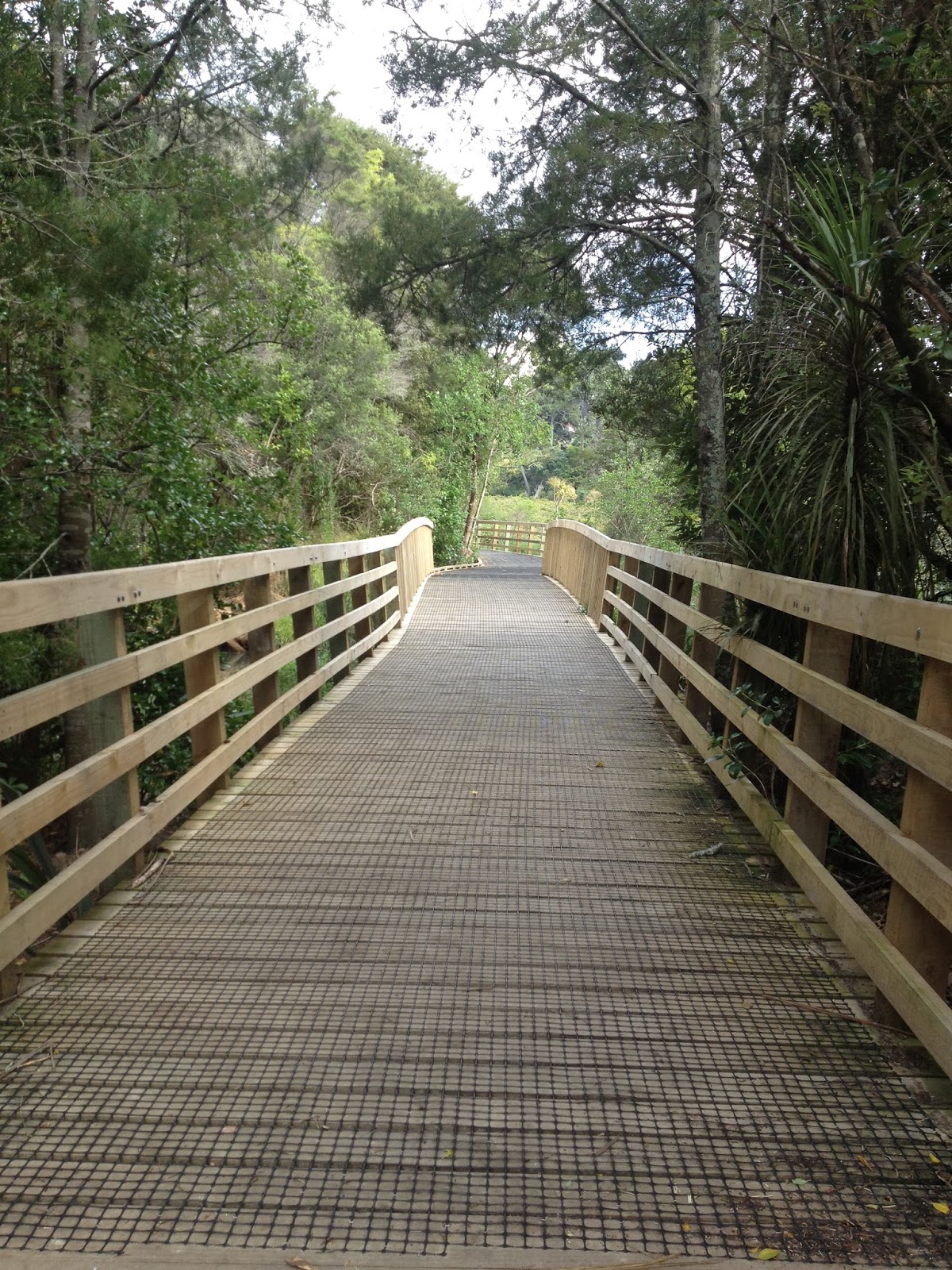 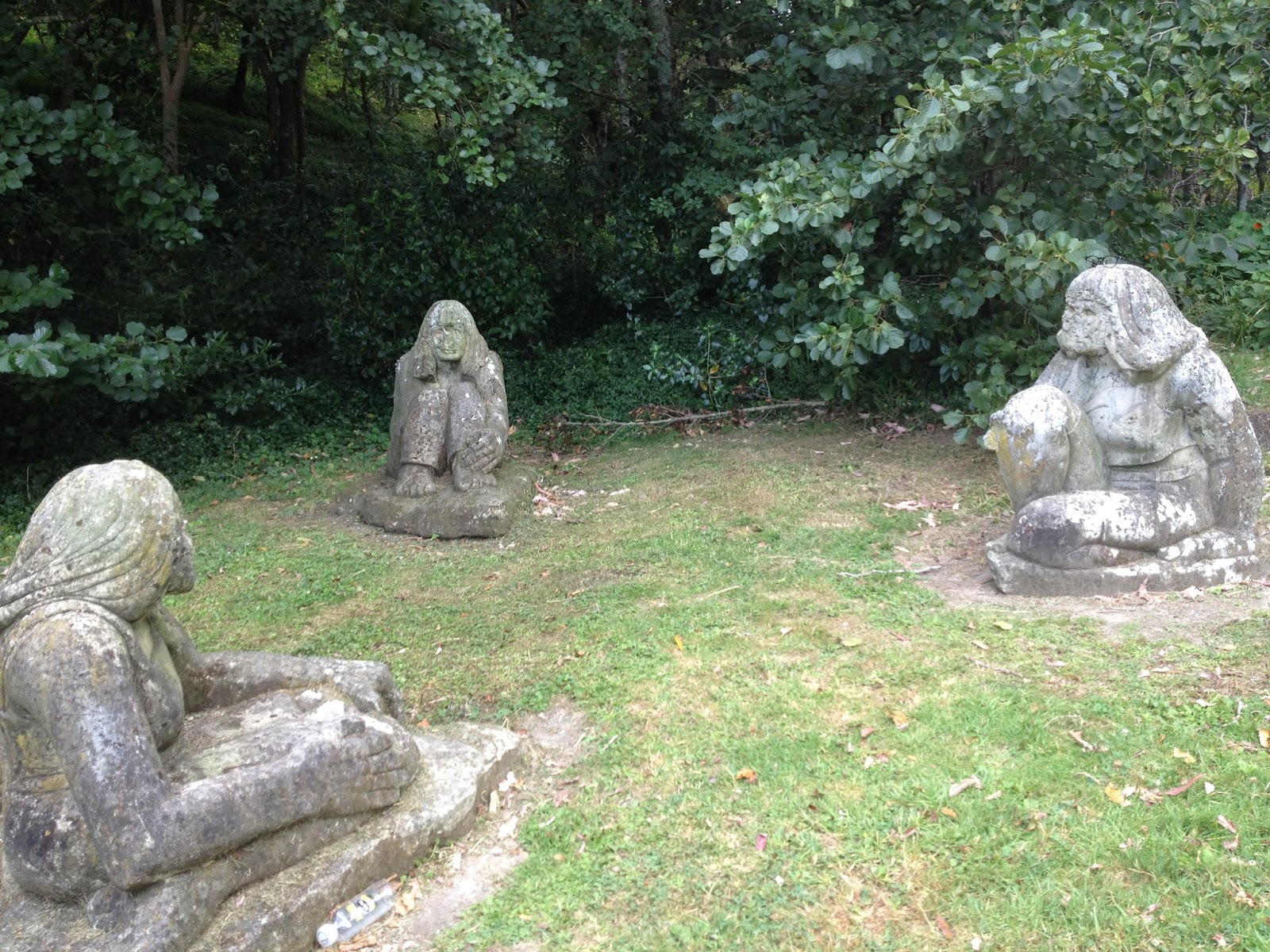 The lady on the right has a pair of glasses on her head, lol :)

Suburban running - less muddy than trails, but just as interesting.  Almost ;)  This particular outing I swung by my new favourite cafe, the Little Bird Unbakery in Summer Street, Ponsonby.  I'd been there before to try a caramel banana milkshake (made with banana, date, vanilla, cashew ice cream and almond milk) and carrot cake (all raw ingredients), and saw all their delicious-sounding menu items.  The food in the cabinet looked pretty tasty too.  Then I saw a post on Instagram about a new chocolate raspberry lava cake so I just had to pop in and grab one on my way home!  It was really good too.  I was nice and shared with Deane: 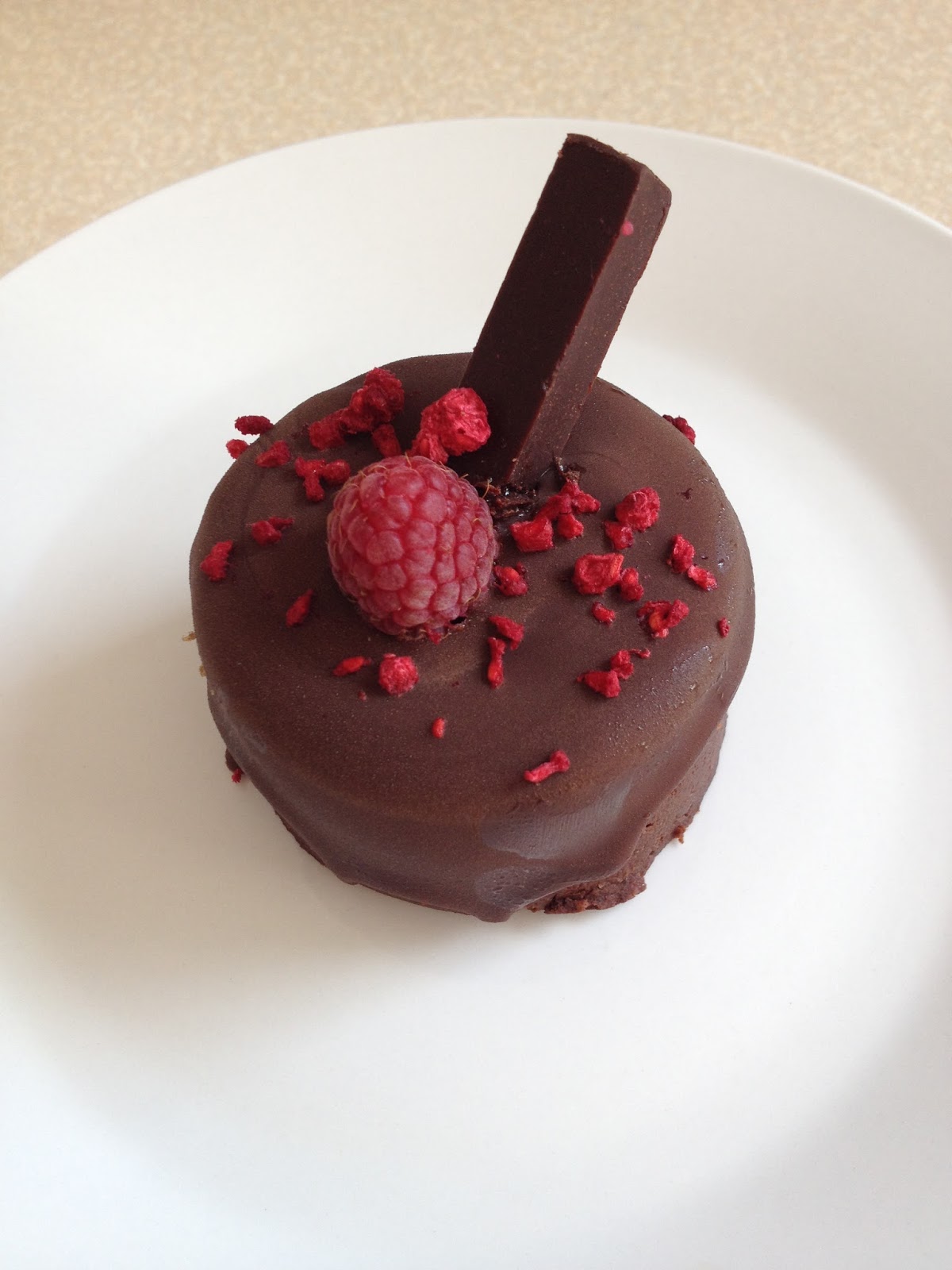 These were made using nut pulp left over from making almond milk.  It had raspberry 'lava' in the middle.  Omnomnom!!  Have to say though, it was a little hard to carry home while running downhill...  I'd love to go there for lunch one day and order something off the menu, although I'd probably be sitting by myself.  I don't really know anybody else that eats this kind of food :(  In the meantime I'm still having fun in my own kitchen.  My newest discovery is pan-seared steel cut oats.  So delicious!  I made a batch of cinnamon steel cut oats that I used for two breakfasts - this one with maple glazed pears: 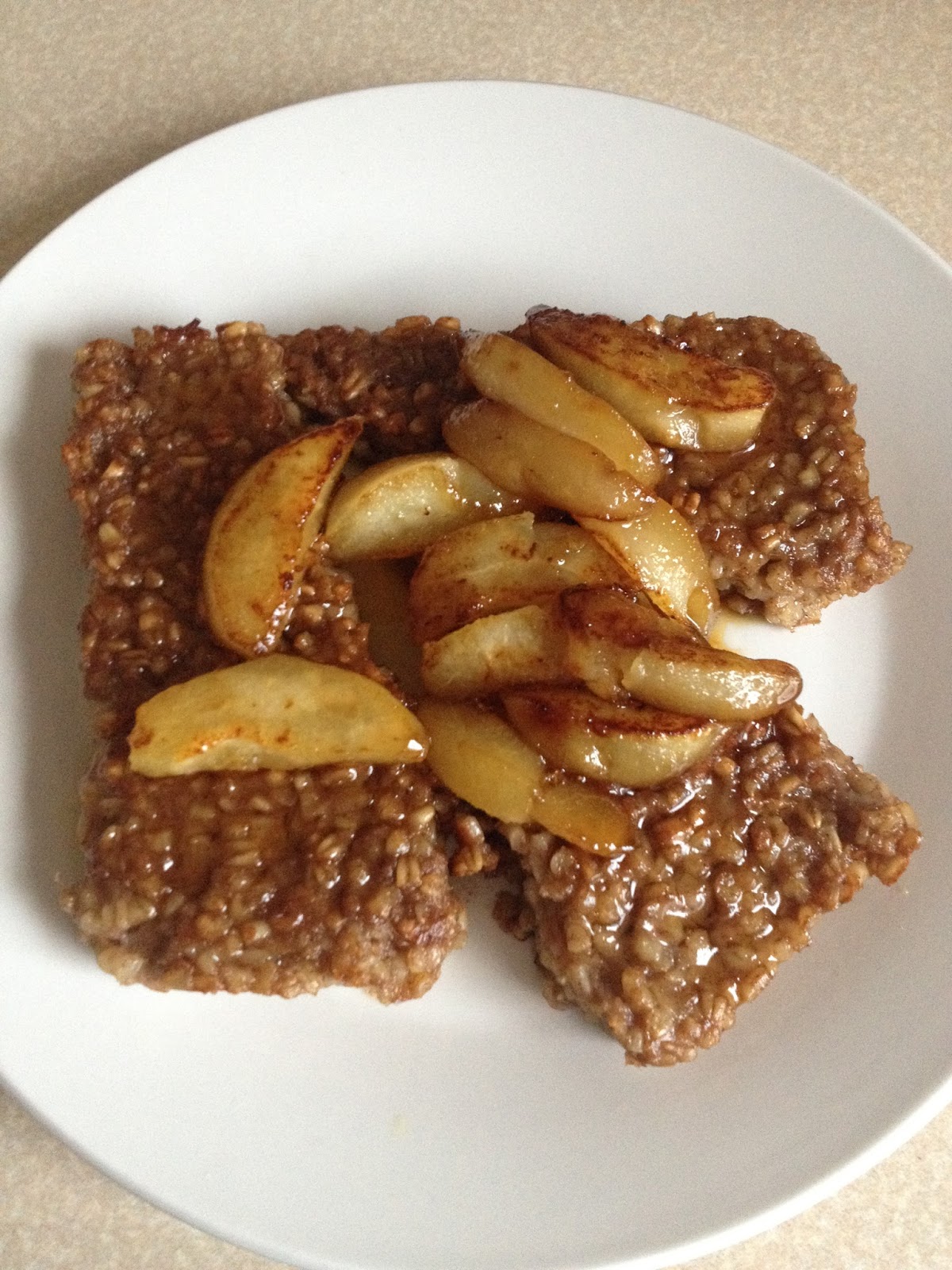 And a couple of days later I had the rest with some grilled fresh peach and blueberries, and a drizzle of maple syrup.  I luuuuuuurve maple syrup! 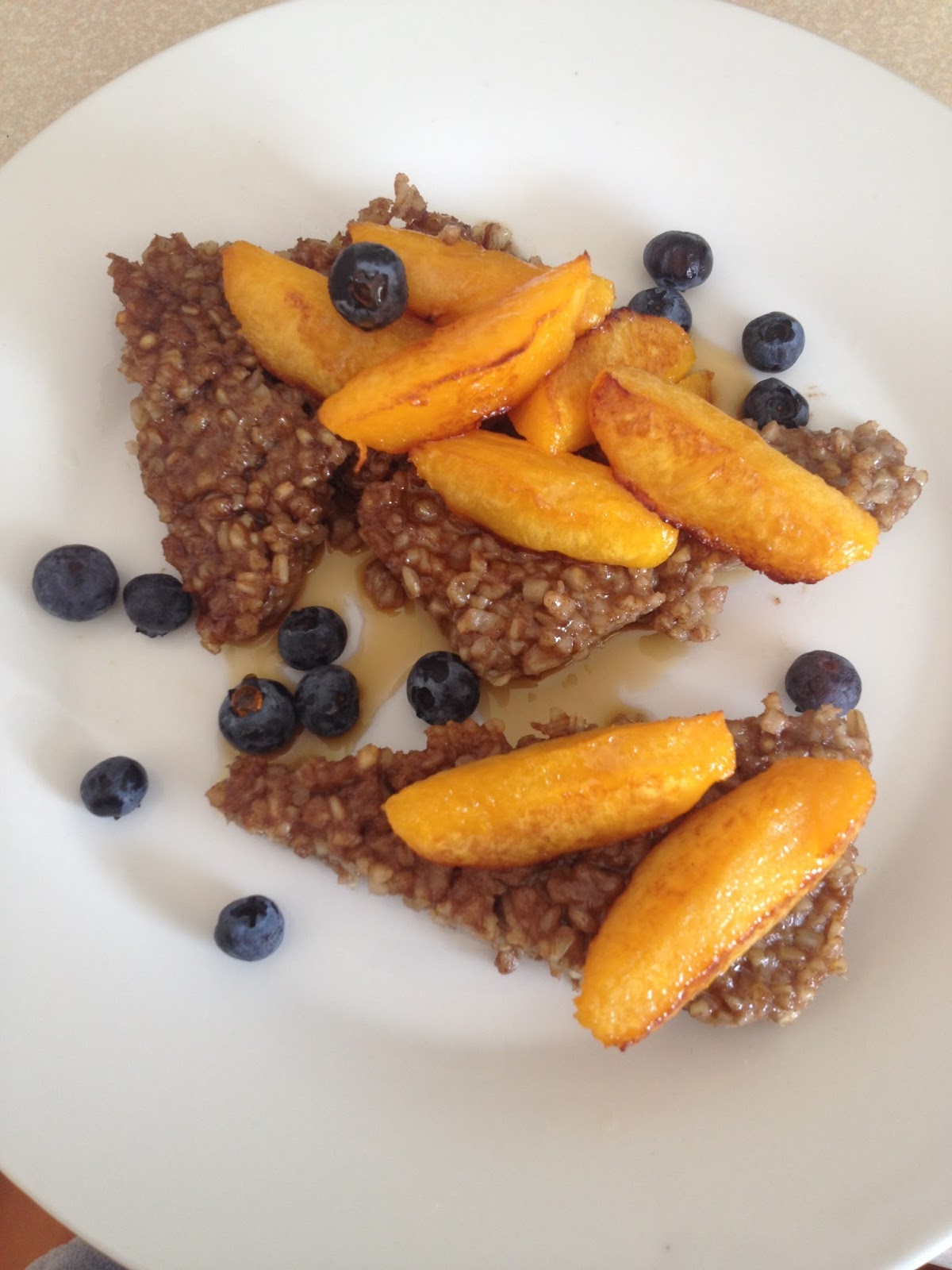 Oatmeal you can eat with a knife and fork, y'all!!  There are plenty of recipes online for pan-seared steel cut oats, but I used this one.  Another recent rediscovery is the good ol' chia pudding.  I made a soy milk chia pudding with a dash of vanilla, some maple syrup, and served it with... you guessed it, fresh peach and blueberries. 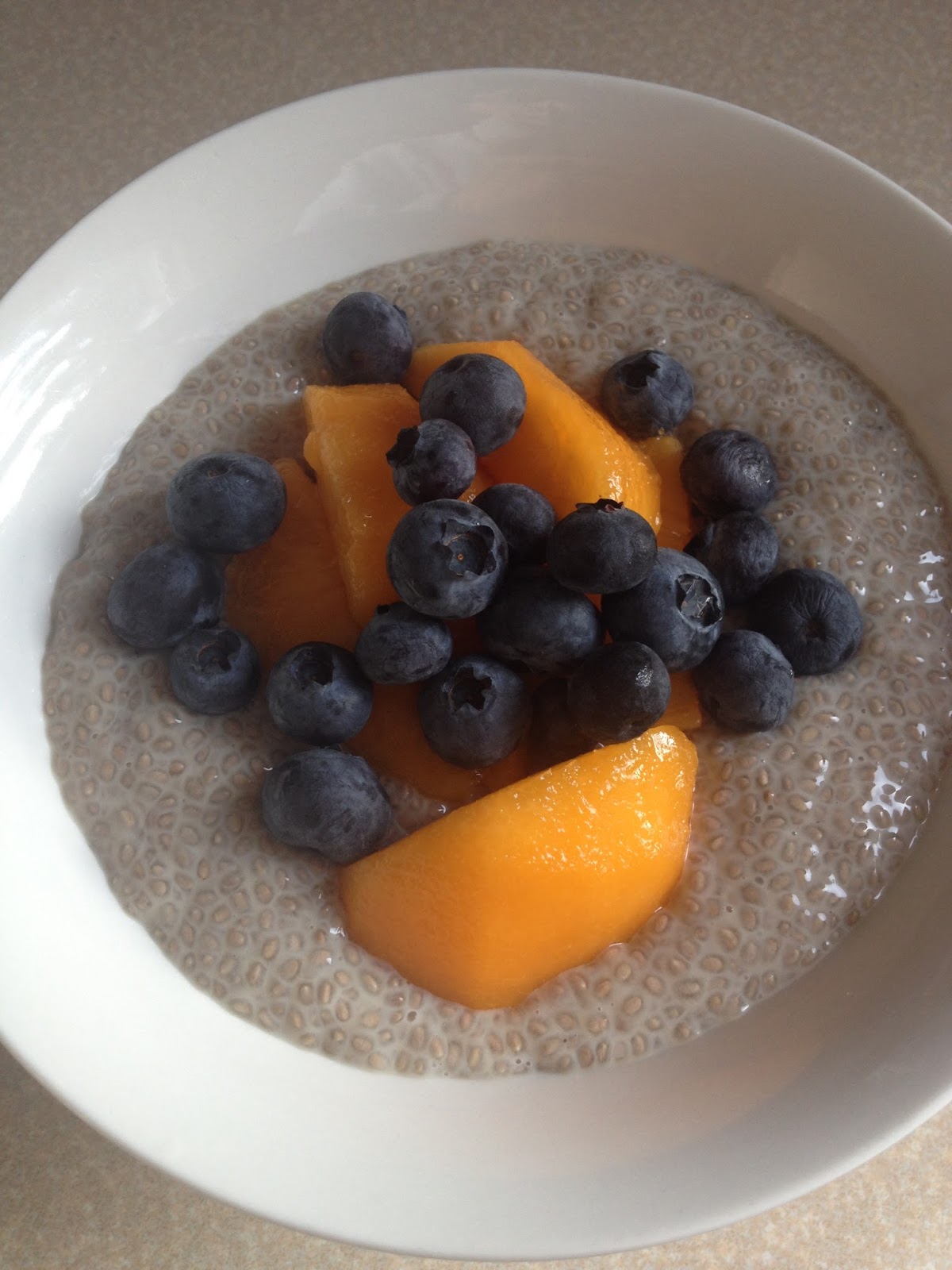 Seriously delicious!  Dangerously fast-moving though, if you catch my drift ;)  Some other tasty meals have included the fabulous raw vegan taco salad: 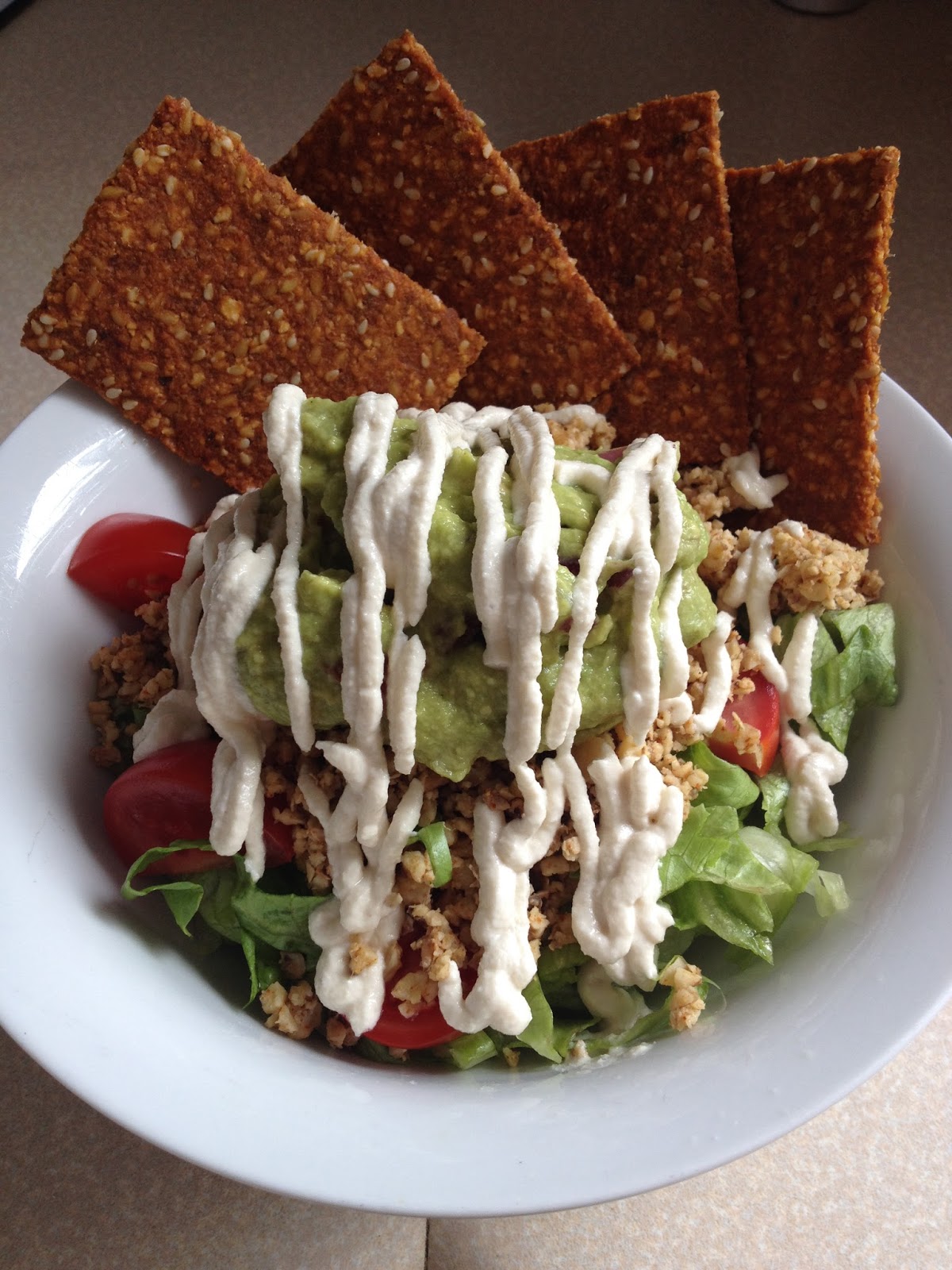 I served this one with some Little Bird Mexican sun-dried tomato crackers (yum!!).  Next up we have my new favourite 'mac-and-cheese-without-the-cheese' recipe, roasted red pepper mac: 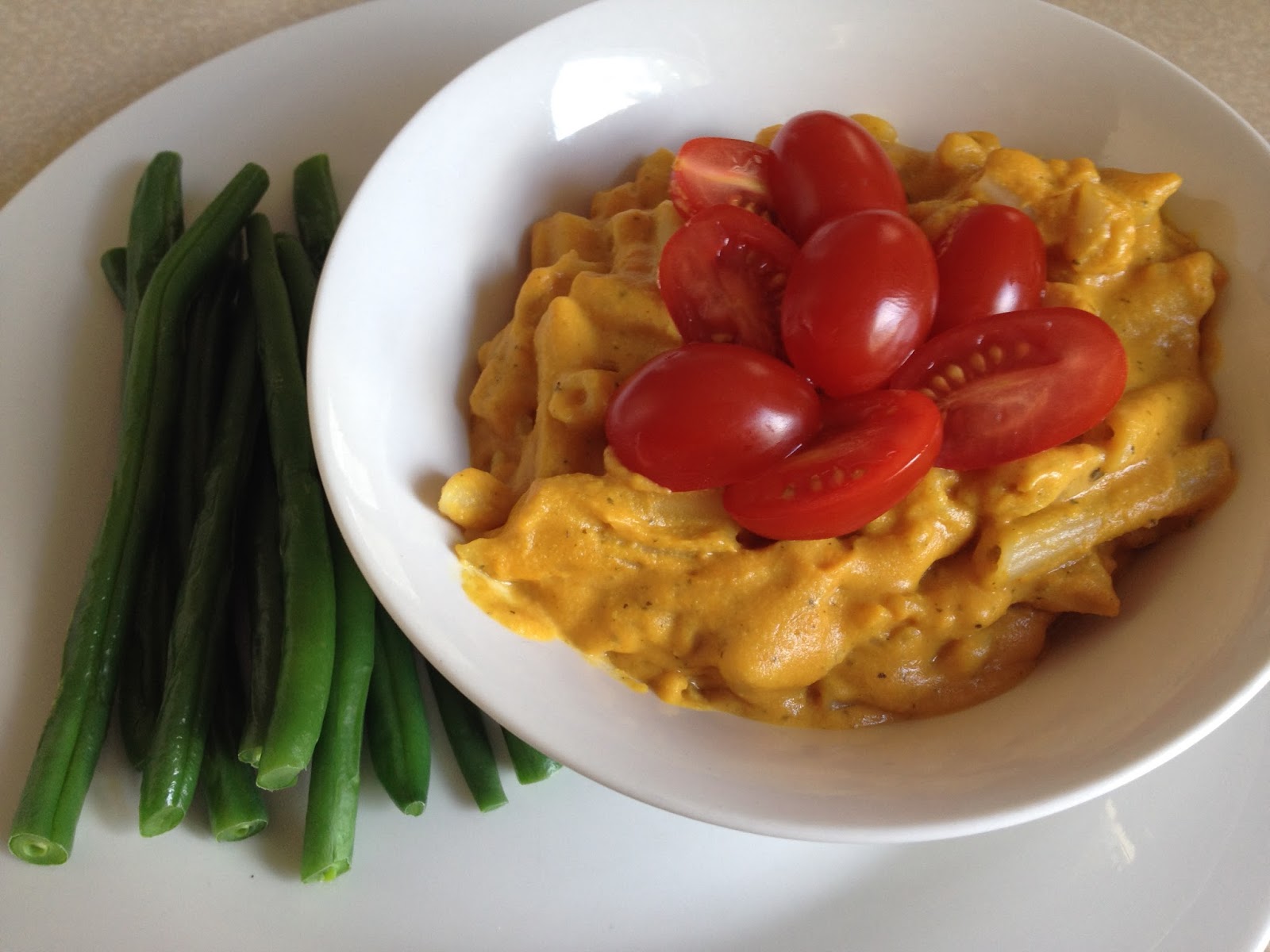 In the interests of cutting down the wheat-based carb intake, I made it with quinoa pasta.  Excellent choice, if I do say so myself!  Very tasty, and much healthier :)  And Deane's current favourite meal, which I found rather good myself, was fresh rice paper spring rolls: 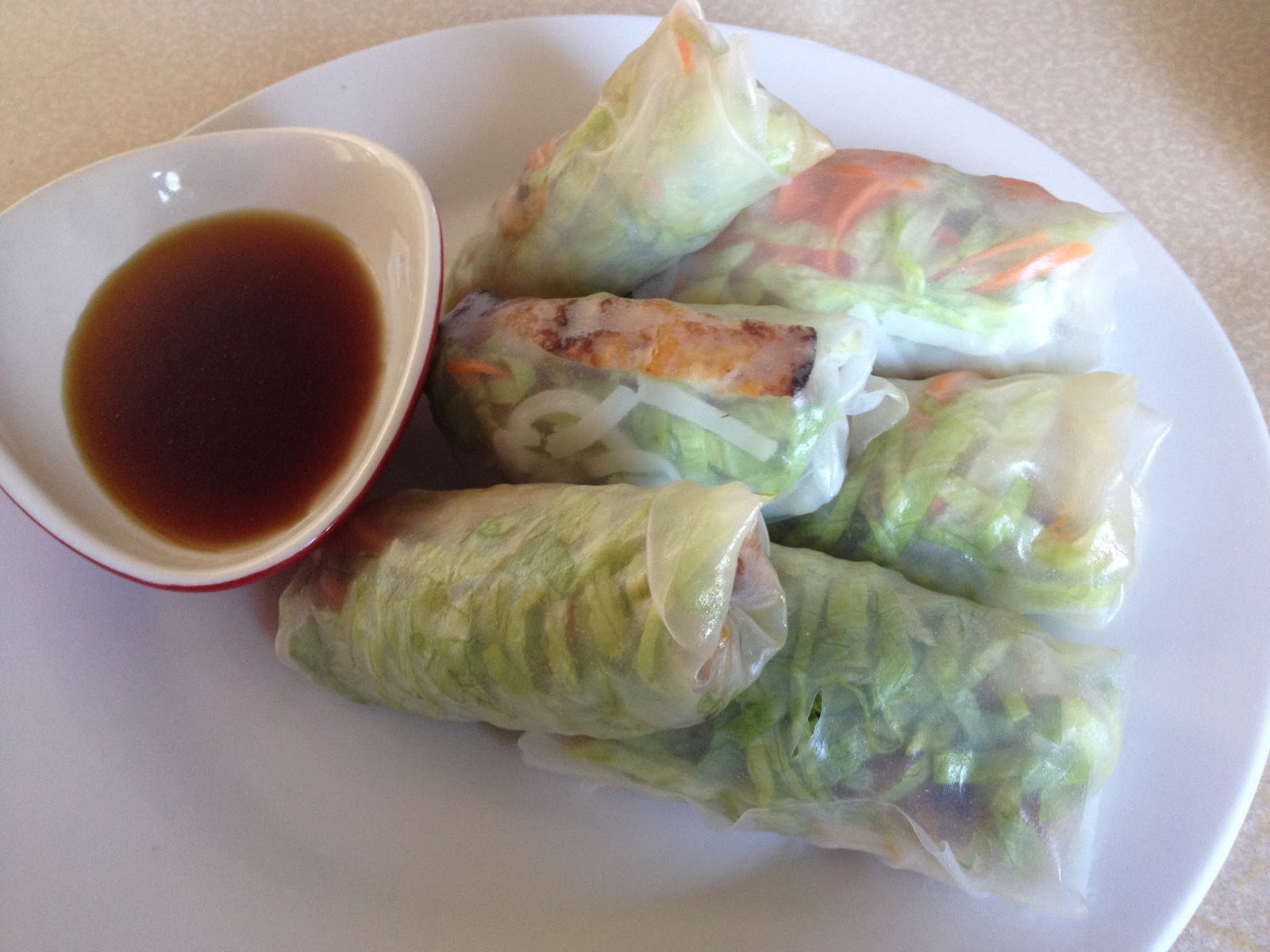 Obviously mine were a little different - I had baked tofu that had been marinated in sesame oil, soy sauce, rice wine vinegar, maple syrup and sriracha with a little bit of garlic powder and onion flakes.  Deane and the boys had marinated steak in theirs.  The dipping sauce was a mixture of mirin, rice wine vinegar and soy sauce.  Yum!  I also made some marinated mushrooms which I found quite tasty, surprisingly.  I'm not a fan of mushrooms, but these were really good!  I used two tablespoons of soy sauce, half a tablespoon of rice bran oil, the juice of one lemon, half a teaspoon of garlic powder and half a teaspoon of ground coriander.  I sliced four large button mushrooms quite thinly, then mixed them with the marinade and left them in the fridge for an hour, stirring them around occasionally until they were softened and had soaked up the flavours.  No cooking required!  Deane enjoyed the rolls so much I had to make another batch the next day, and have bought more ingredients to make another batch some time this week.  At least now I'm getting the hang of rolling them without them falling apart ;)  Ooh, food can be so much fun!

In other news, X has started intermediate school this week!  It was his first day yesterday, and I do believe it went rather well.  We all walked him to school yesterday morning, and I picked him up in the afternoon.  It's a nice half hour walk which takes us through the Ponsonby shopping area.  I'm thinking it might work quite well for my morning runs - he's on a scooter so I can start my run by dropping him at school and just carry on from there.  I wasn't particularly organised this morning though, and instead had plans of swinging past Little Bird on my way home to grab a caramel banana milkshake for breakfast.  Unfortunately I ended up having T with me and he needed to pee so we had to leg it home instead.  I kind of got a run in, if you count running barefoot down Franklin Road next to a kid on a scooter while carrying a bag full of school sports uniforms.  And I was kinda busting to pee too, so that was fun...  In lieu of my caramel banana milkshake, I decided to make my own power smoothie for breakfast - spinach, cashews, blueberries, banana, soy milk, chia seeds, spirulina powder and agave syrup, topped with some buckwheat granola - surprisingly good: 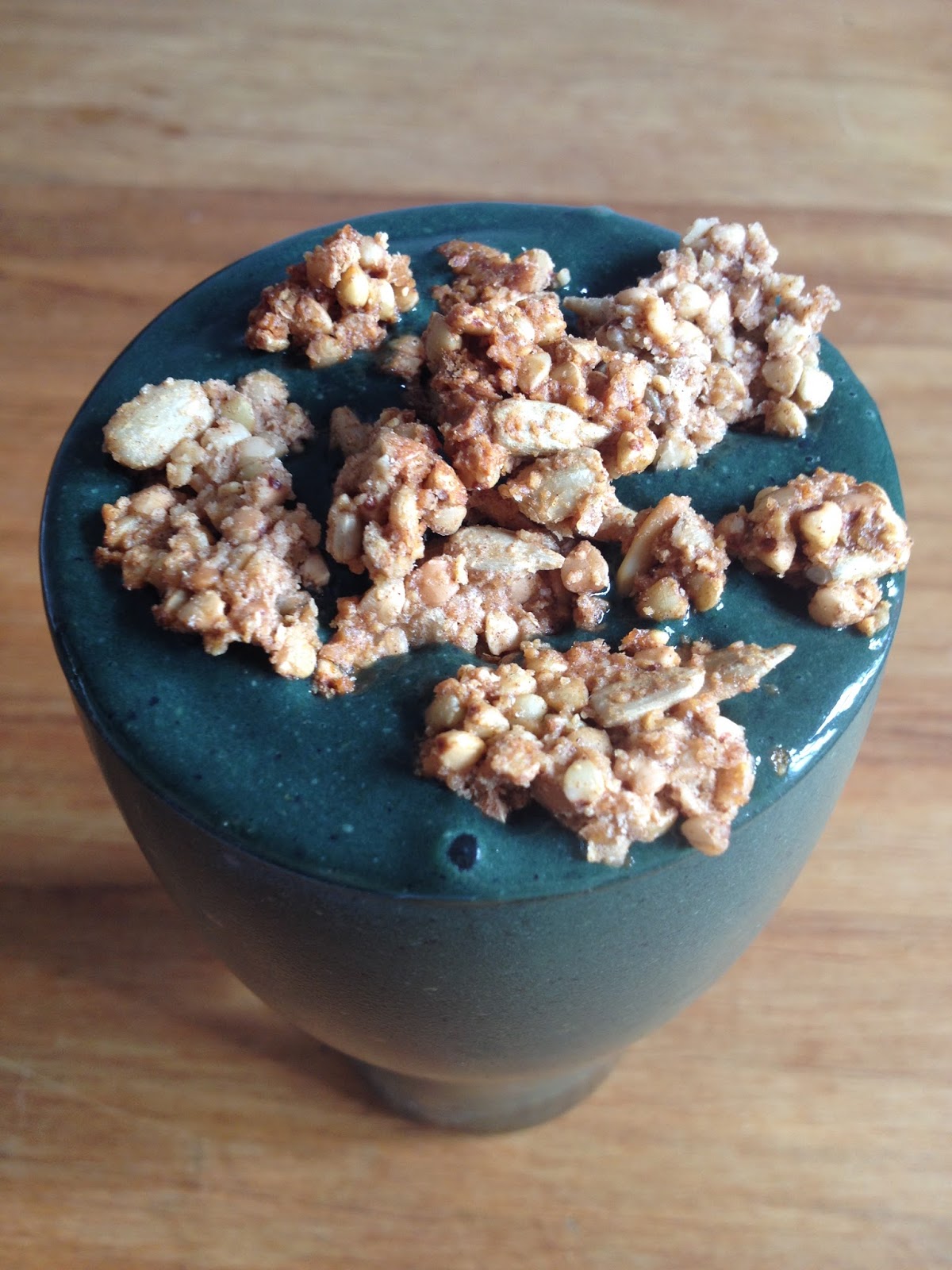 T starts back at school next week so I'm really looking forward to that.  Not looking forward to next week's presentation for my business communication assignment though... urgh... guess I'd better finish writing it so I can practice!  Enjoy your week, wherever you are and whatever you're doing :)
Posted by kreachr at 12:03