The pros and cons of long runs: things you'd maybe heard about but didn't take seriously. Until now.

I could wax lyrical for hours about the awesomeness of long runs, particularly when conversing with a fellow crazy-person runner.  The list of pros is a mile long (I checked).  Conversely, the list of cons is relatively short, but the things on that list should not be poo-pooed in any way.  How do I know this?  From experience.  Yes, that's right, I'm a dumb ass.  I believe this has already been established on a number of occasions.  At the risk of possibly making myself out to be a 34 year old with the reasoning capabilities of someone a couple of decades younger, I'll let you know why:

Some of these points may need a little clarification.  The first one I guess is relatively self-explanatory.  We have encountered this problem before, and I thought I'd pretty much solved it by getting running shoes a half size to a full size larger.  But one can only assume that the recent foray into trail running in the Waitakeres, with its myriad steep downhills, are no match for roomy toe boxes.  I have not one, but three slightly blackened toenails, which had hitherto gone unnoticed due to some rather lovely peacock-coloured nail polish.  They are currently at varying stages of falling-off.  Ew.

The second point, oh dear lord, the second point.  You hear horror stories about all manner of body parts getting rubbed raw during a race, usually due to some idiot wearing new gear they hadn't pre-tested, or not properly covering up sensitive areas with lubricant or strapping.  Thankfully I have not (yet) encountered this problem during a race.  I did, however, knowingly set out for a long (22km) run last Thursday and forgot to anti-chafe my underarms before I left.  Oddly, this is the only area I ever have a chafing problem.  Near the end of the run I realised my grievous error, but had no option other than to carry on, as I had not brought my trusty stick of BodyGlide with me.  It's been a week now, and my left underarm is still somewhat painful: 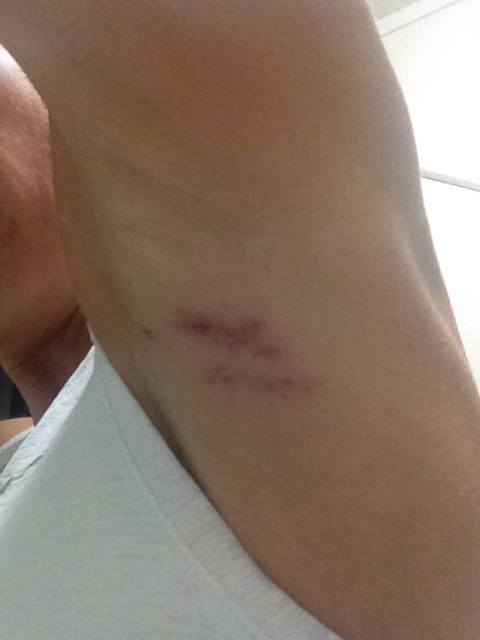 I'd love to say I've learned my lesson, but I'll likely forget again some time in the not-so-distant future and repeat this nasty experience.  Yay me.

Point three probably has something to contribute to point two - gritty salt residue from sweat.  If I rub my face with my hands after a run, it feels like its covered in dust or dirt.  Guess I'm a salty sweater!  I've never had any problems with cramping though, so I can only assume I have the balance right.  I'll just keep doing what I do.  Unfortunately this residue can be slightly problematic, and what is potentially a factor in chafing.  Particularly on hot, windy days.  All the more reason to run early in the morning, yes?  I miss those beautiful sunrises already...

Point four on the list may be a foreign term for you, so let me explain - 'rungry' is the runner slang term for a hungry runner.  You do not want to get on the bad side of a hungry runner, because dude, they are crabby!  Incredibly hungry, crotchety people.  Runners usually get 'rungry' after a long run - on these particular days, three square meals just doesn't cut it.  Hell, three square meals and three fairly decent-sized snacks doesn't cut it!  GIVE ME ALL THE NOMS!  I am eating insanely large amounts of food, and I have become a carb-hoar (gluten-free carb-hoar, that is).  I made this spaghetti pomodoro with grilled tempeh for dinner, enough for two servings (half of the recipe for the spaghetti and the tempeh): 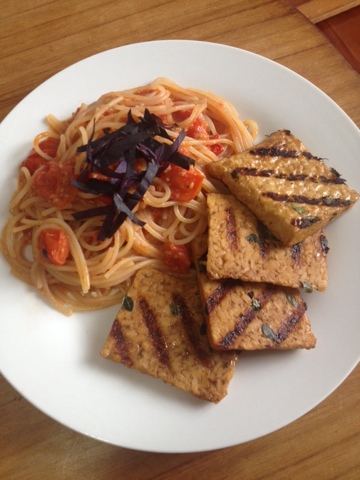 I was a little peckish as I had run 10km at Cornwall Park earlier today, so I put all the tempeh on my plate, and decided to keep aside half the pasta for lunch tomorrow.  Yeah.  That pasta-for-lunch-tomorrow became pasta-for-dessert.  Oops.  But damn, it was goooooooood...

As for point five, again, relatively self-explanatory.  One should always apply sunscreen at least 20 minutes before heading out the door.  Sadly, one does not often remember to do so.  However, one has had the good fortune to avoid actual sunburn whilst running to date.  But there's always a first time for everything, and one has had many an interesting tan pattern...

The sixth and final point on the list (yes, I could only think of six) is that, as previously stated, long runs are long.  Depending on how long your long run is, and what terrain you're running it on, it could take anywhere from two hours to eight.  That's a lot of time that could be dedicated to doing so. many. other. things.  But then, we're runners and we love it in all it's gross, disgusting glory.  Amiright? ;)
Posted by kreachr at 22:19