Again with the planning

Study - getting there slowly, but still a little behind.  Having Deane often working from home and constantly on the phone tends to be quite distracting.  So.  Many.  Phone calls!!!
Housework - what I should be doing right now because the reinstatement of the daily routine didn't quite work out this week and my house is trashed.
Running - better, but not quite how I'd like it.  Ended up skipping the run this morning in favour of getting other things done.  Although I have enjoyed a couple of runs this week (15km and 11km) following some routes I found on WalkJogRun that other people have submitted.  Following other peoples' routes makes it a little more fun than plodding along the same ol' familiar ones.
Knitting - I'm working on the slowest sweater sleeve known to man, and have resorted to bribing myself with chocolate drops in order to get the rows knit.  Bit sad, really... who's bright idea was it to knit a long-sleeved hoodie in laceweight anyway?!?

This weekend is the rescheduled Coatesville Classic, bright and early Sunday morning with a start time of 7.30am.  This means a wake up of around 5am.  I am contemplating what to do about breakfast, wondering if a banana or two would suffice, and cause less nervous-stomach issues.  I guess there's only one way to find out...  I know what I can eat for breakfast on a normal day before a long run without having any problems, but the only time I get to try race-day breakfasts is on race days when my stomach is going haywire.  Oh, such fun :/  Thrown on top of this usual issue would be the potential lack of sleep and a large side of stress (neither of which are good for IBS, or pre-race preparations).  Deane and I will be driving to Palmerston North this afternoon once the boys have finished school (they're staying here with their Aunt).  He was already heading down for a big get-together of a whole bunch of friends from way back, and I am now tagging along to go and visit a family member who has recently been admitted to hospital.  The drive will take about 6-7 hours each way, and I'm betting Deane won't want to leave Palmy at 3pm tomorrow just so I can get an early night.  We'll have to see how it goes.  I will be taking food with me though, so I can avoid the nasty fast-food last-resort meal options that invariably end up being consumed on road trips.  Happy Cow doesn't have any listings for veg*n-friendly restaurants and there's not a lot listed on other sites.  I think living in such a large, diverse city has given me warped ideas of what the rest of the country is like - the lack of options available anywhere outside of Auckland is a real eye-opener.  Either there aren't many vegetarians outside of the larger metropolitan areas, or they're having to fend for themselves and survive on garden salads when dining out.

So at the moment instead of doing housework or study like I'm supposed to be doing, I'm getting stuff organised for car knitting and reading, sorting out transportable vegan snacks/meals, arranging easy meal options that can be prepared for my kids while we're away, and writing a blog post.  Great use of time there, huh? ;)

Just wanted to mention a couple of things before I forget:

Firstly, I won a snuggly bath robe and throw blanket from Foodbox for my vegan pumpkin spinach lasagne: 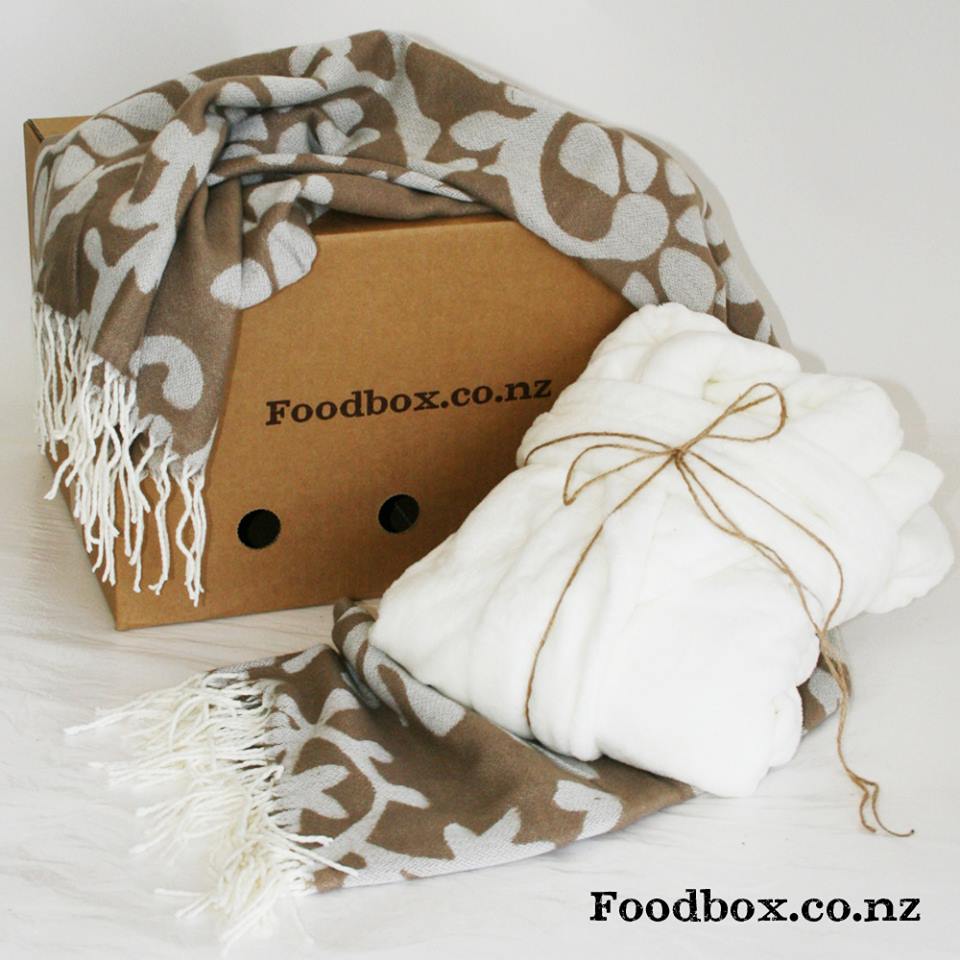 I had a wee laugh when it arrived though, because they'd left the price tags on!  Oops...

Secondly, friends of ours previously from Wellington (our boys went to school with their boys, and they'd hang out on occasion) moved to Gisborne a while back, and they have recently started their own coffee roasting and supply business - Far East Coffee Co.  We ordered some coffee from them last week, and I can happily say it is awesome!!  So if you're in Gisborne, or anywhere in New Zealand really, and want some good coffee, check them out.  They deliver!  They're lovely, down-to-earth, good people with a great product.  And it's good to support local :)

Okay, I better at least make it look like I put some effort in to tidying the place up.  Wish me luck for Sunday!  I hope you have a great weekend and enjoy some sun :)  Get amongst it!  Let me know what you got up to, I'd love to hear from y'all.  Good luck for the DUAL, Sheryl!!
Posted by kreachr at 13:03