It's been a week, so I guess it's about time I got around to telling you how I got on at the Coastal Challenge 17km race on the 2nd March!

I was rather pleased about the fact that I didn't have to be at Devonport until 9.15am, which meant I didn't have to set an alarm and was just able to wake up naturally.  I wasn't in a rush for breakfast either, knowing that the race itself didn't start until 11.30am.  So I took the morning slowly, which unfortunately did nothing for my pre-race nerves.  It's a bit silly really, I don't usually feel nervous, but my subconscious and my body tells me otherwise.  This morning was particularly bad, and I'm pretty sure I had no breakfast left to draw fuel from for the race.  I took a gel with me for mid-race fuel and an apricot-almond larabar to munch on an hour or so before race start in the hopes of getting some much-needed solid food into me that would hang around and actually be of use.  I was planning on catching the ferry over as I had arranged to catch a bus to the start, with the finish being at Windsor Park next to the ferry terminal in Devonport, but I missed my window of opportunity to get to the ferry by being stuck in the bathroom :(  Not a huge deal, I just had to drive there instead.  I was lucky to get a car park very close to the finish line too!  I had enough time for a pit stop before catching the bus to the start line, and while on this bus ride I came to the realisation that my tummy troubles usually only last as long as it takes me to get out the front door. So I had no qualms about chomping through my larabar at around 10am and chugging some water.  I had sat behind a guy on the bus who was relatively chatty, and we talked about previous races, upcoming events, family, study, jobs etc, and strangely enough, socks.  He had Thorlo Experias on, and I had my Drymax socks, which I told him all about (you know, how they're the best socks for wicking moisture away from your feet, quick draining for when you're running through water, and high cuffs to stop debris getting in).  Me being me (ie: useless with social etiquette) I forgot to say goodbye before I hopped off the bus.  Oops.

We arrived at Browns Bay around 10.15ish so I had over an hour to wait for the start of the race.  I registered and got my number bib and timing chip, then sat around watching some of the people competing in the full monty (33km) and 22km races run past.  I got to chat with and cheer on my friends Martin, Deb, Ant and Dan as they stopped in at the drink station.  After talking to them I was glad I had stuck to the 17km distance as it sounded like there was a bit of swimming involved in the longer distances.  I'm not a fan of ocean swimming and my confidence isn't overly high in that department, plus the wind was a little chilly and I didn't really fancy having to run soaking wet.  Dodged a bullet there I guess ;)

Eventually the pre-race briefing started, then we all got to stand around for another eight minutes to wait for the official start of the race since the briefing was quicker than expected.  I was relatively close to the start of the bunch, so when the start horn went off I got passed by what felt like the entire contingent of 17km runners!  I was under no illusion that I could keep up with them - not only am I shite at running on sand, hard-packed or soft, I knew I wasn't 100% that day and I had to reserve some energy for the rock-hopping and soft sand coming up later.  I'm glad I started out as I did (slowly), because it wasn't long before I felt like I was flagging.  The first drink station seemed like it took forever to arrive, and I was starting to wonder if there would even be one despite being told in the briefing that there were three along the way.  I was a little annoyed with myself for deciding not to wear a hydration pack at that stage.  Eventually it did arrive, but it was a little too early in the race to down my gel, so I grabbed a cup of water and kept plodding.  The rock hopping was really quite fun despite my apparent lack of energy.  I didn't particularly enjoy the flat beach areas though, as once again I was getting passed by people who were obviously slower than me on the rocks, but had (what seemed to me at the time) an inhuman ability to run like the wind on any and all types of sand.  (Maybe that's something I should practice more...).

I was happy to see the second drink station approaching in the distance and gladly slowed to a walk and chugged back my gel on the way.  Again, I just grabbed a cup of water then picked up the running pace again.  A little over an hour into the race, my bus friend caught up with me and asked how we were doing for time - we'd been running for an hour and ten minutes.  We caught up again a few more times after that, which went something along the lines of:

c) ::on the street, with only a kilometre or so to go:: general conversation about the race nearly being over, but the finish line seeming much further away than we thought although still within the race distance.  Bus guy: "I might try and keep up with you."  Me: (subconscious competitive spirit kicks in to overdrive) "sure" (speed waaaaaaay up, and just keep getting faster the closer the finish line gets, to the point that we're practically sprinting when we cross the line).

Wow, that was a good finish!  I have never before felt that competitive drive against other runners in a race, to the point where I will deliberately speed up for the last few hundred metres.  I was kind of hoping I'd be able to catch a couple who had passed me soon after we hit the road section, but I ended up about two seconds behind them, and bus guy did indeed manage to keep up with me, despite my increasing speed!  It was actually quite fun, and I obviously had more gas in the tank than I thought I did.  Or I just really suck at coastal running and was secretly really pleased to be running on flat, solid ground again ;)

As usual, I completely forgot to stop my watch until after I'd undone my laces and removed the timing chip from my shoe so I had to guess what my time was.  I estimated it to be about one hour 47 minutes or so.  I got to catch up with my friends again afterwards, and find out how they did with their races - Martin did the full monty and finished in about five hours and six minutes, and Deb, Ant and Dan did the 22km, each around the three hour mark (Dan and Deb under, Ant a little over).  Deane and the boys had taken the ferry over to Devonport but, for the second time, missed my finish.  One day they might actually catch one of my race finishes.  It would be nice...  Deane's mum and her partner had tried their best to make it to the finish line in time, having travelled up from Napier for the Bruce Springsteen concert, but they'd got stuck in traffic coming over the bridge and missed it too.  Oh well...

We all headed home and prepared for a barbecue that evening, and I checked my preliminary results later in the afternoon - 1:42:34!  Nearly 20 minutes quicker than I had estimated it would take me :)  I was 20th woman out of 91 in the 17km race and 14th out of 50 in my age category.  Certainly nothing to frown at!

A few days later the photos were up, and I thought they were actually not too bad.  Of course when I got to look at them properly (ie: after buying them and seeing them at a decent size and without the digital watermark splashed across them) some of them were a little questionable: 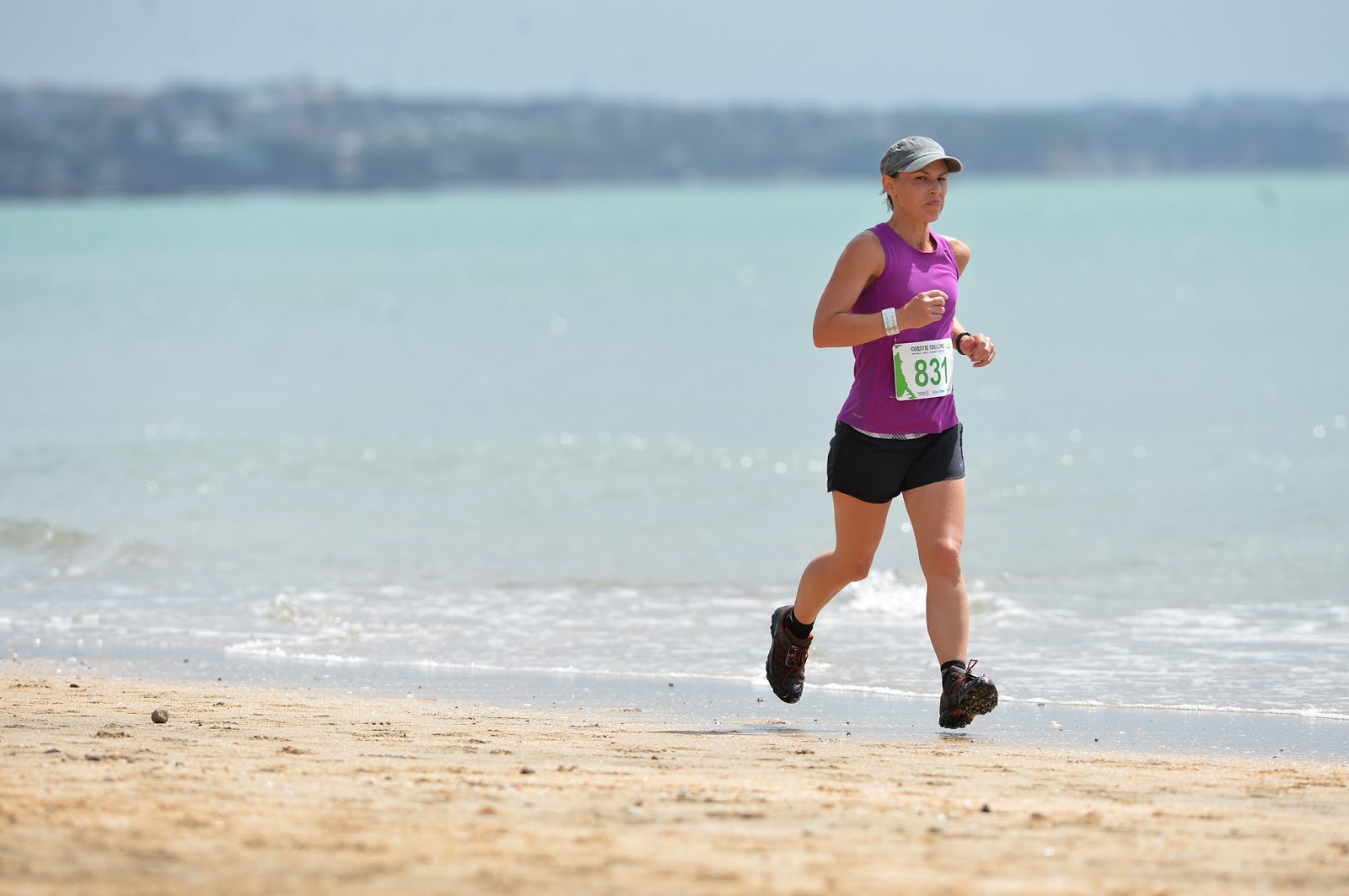 But I really did have fun, see: 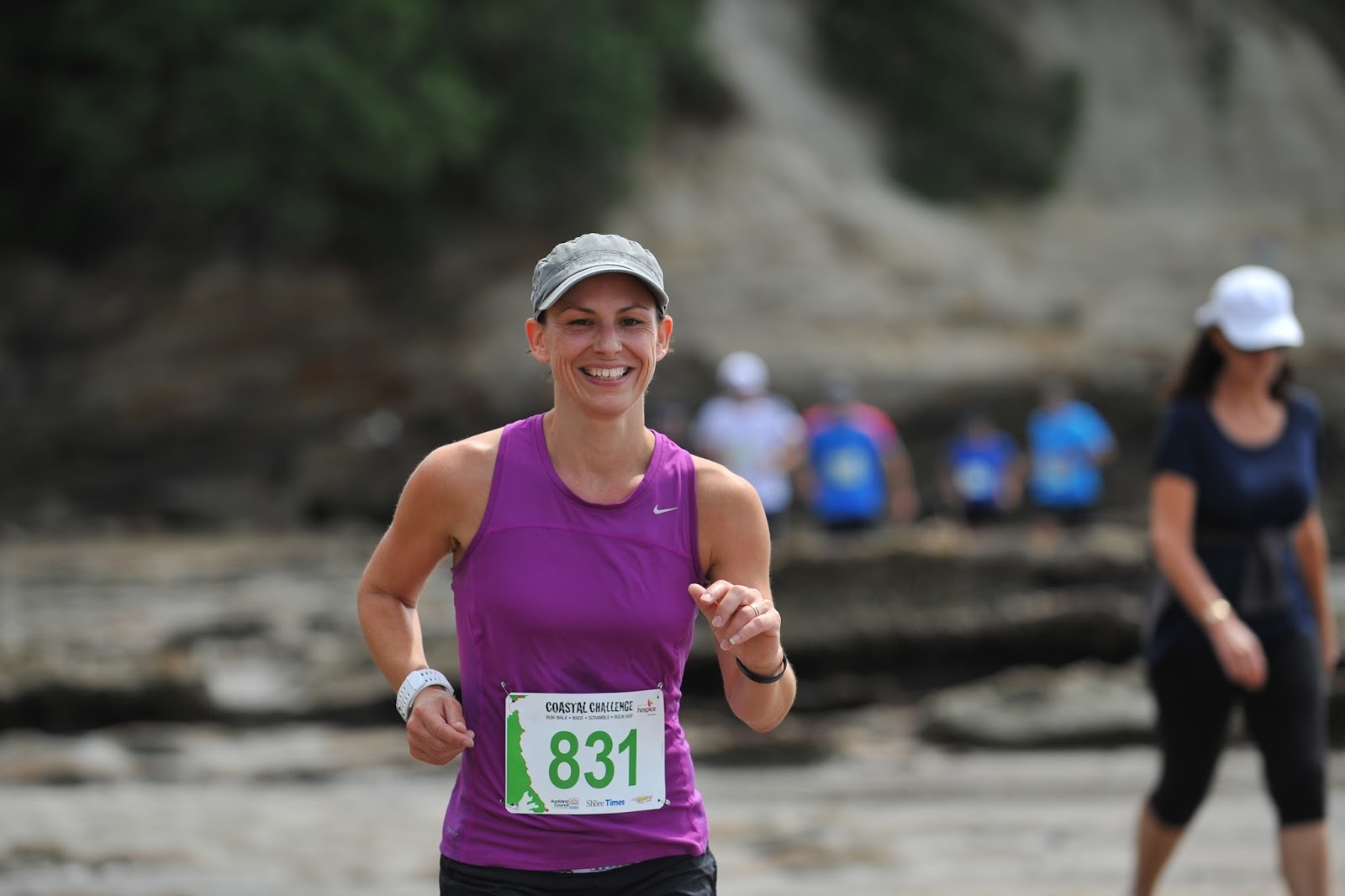 And of course, there were moments of intense concentration.  Most likely "please please please do not trip on these rocks..." or "OMG how far away is the finish line already??" 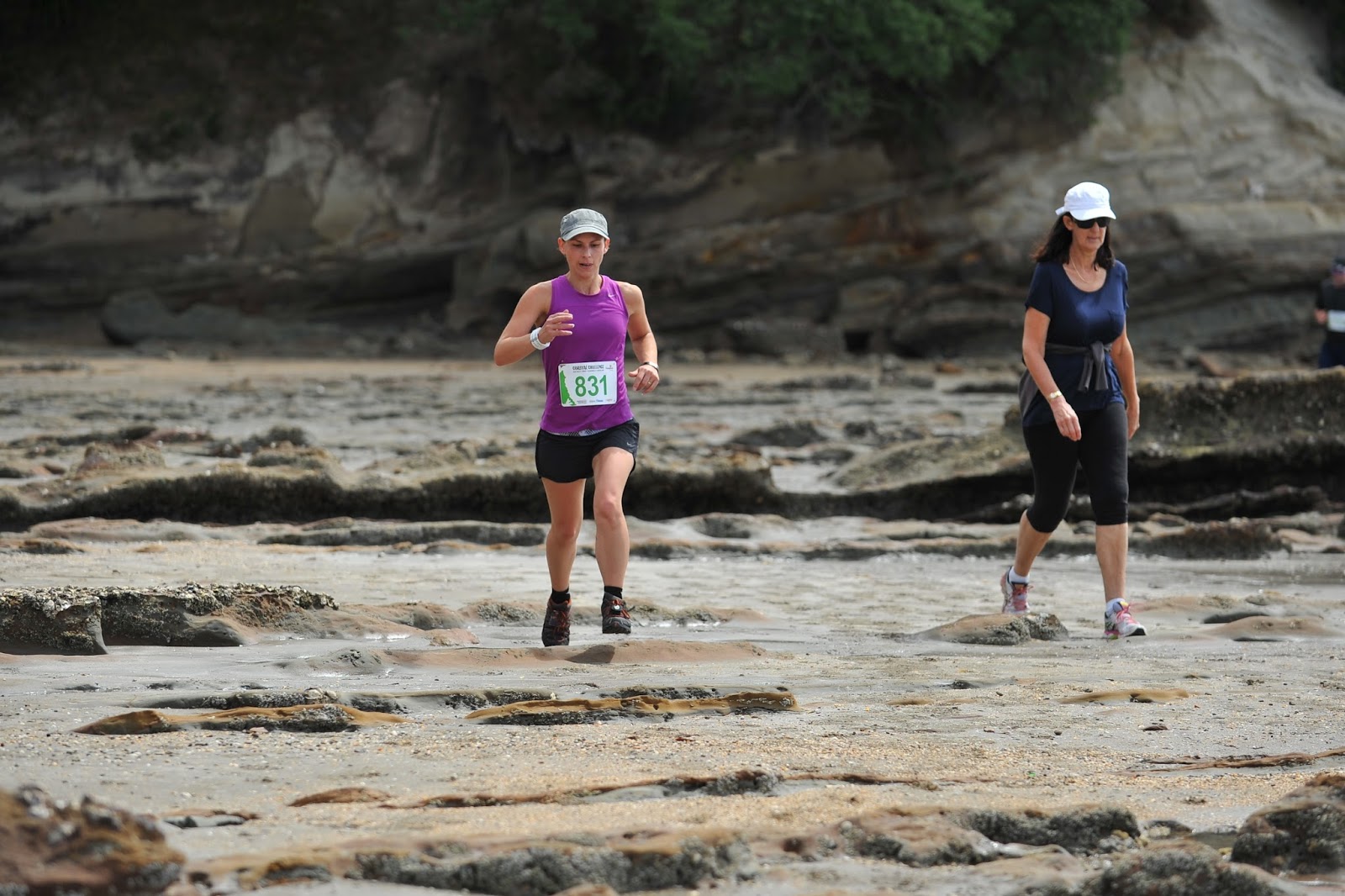 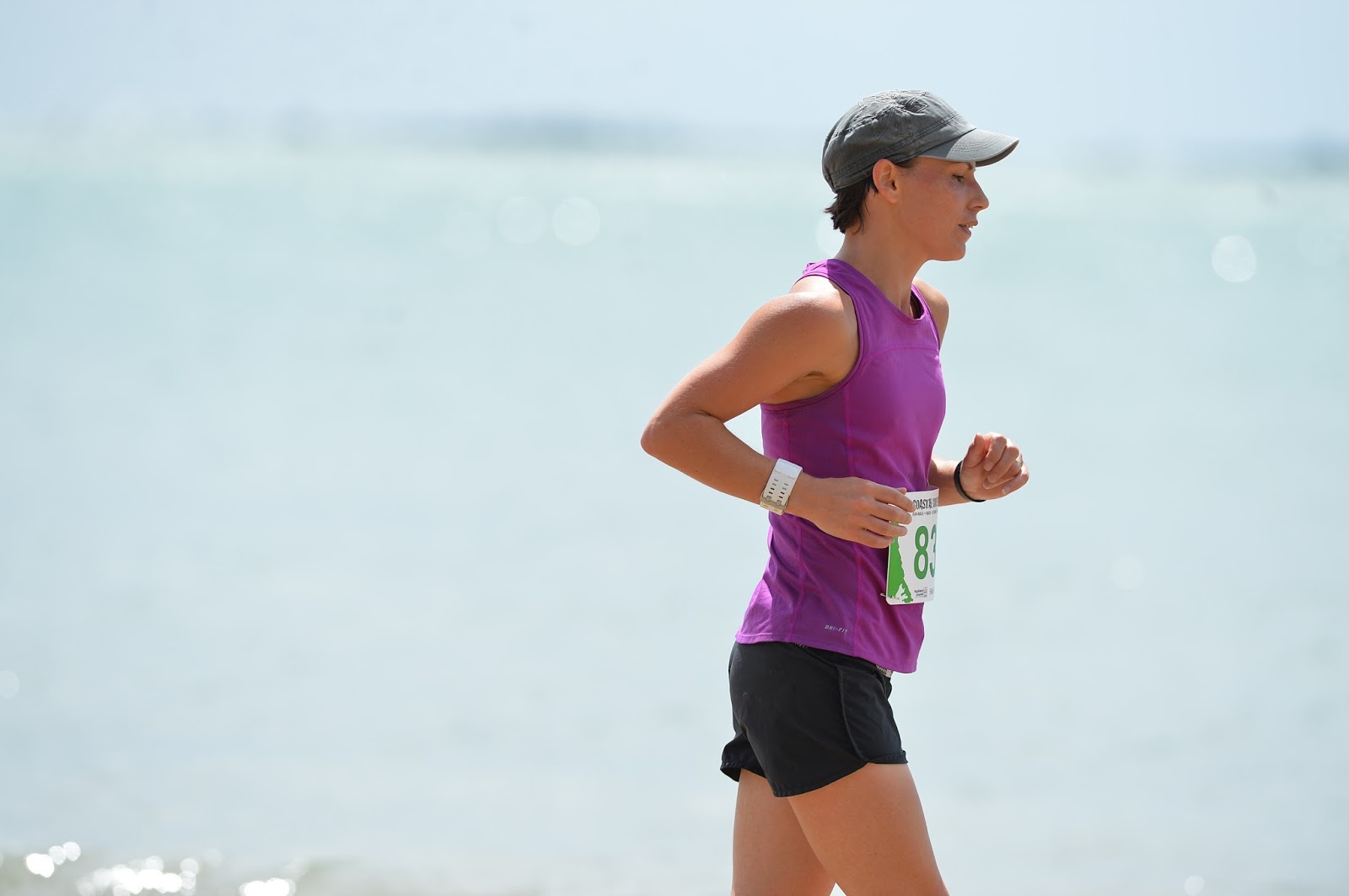 It wasn't until much later that I appreciated the fact that I'd completed the entirety of the race without a single slip!  Awesome :)  I plan to do it again next year, and try to beat my time.  I think I'll give the longer distances and potential swims a miss.  This year high tide was at 8am, just five minutes before the start of the full monty race, so they had several swims to contend with, one of them being about 800 metres.  One or two racers had to be assisted by the lifeguards and marshals.  The 22km distance had a decent swim to deal with as well.  No thanks, I'll just stick to the thigh-high wade...
Posted by kreachr at 22:31