And by that I mean both the event and my slow-to-post recap.  As you know, the Coatesville Classic was postponed due to Cyclone Lusi, which ended up being a bit of a non-event, smashed window aside.  That Sunday's weather was actually pretty good.  However, the event organisers had to make the tough call on postponement based on set-up of equipment, flags, start/finish lines etc which would've had to be out overnight with potentially strong winds, and we all know weather can be unpredictable.  Volunteers at events are amazing, wonderful people, but it just wouldn't be fair to make them get up super early and stand about for hours in abysmal weather just to hand cups of water to a bunch of people mad enough to run in it.  Events don't get postponed or cancelled on a whim, so good on Running Events for their professionalism in handling the situation.

Those of us still able to partake in the event on the following weekend were treated to more good weather, albeit a little crisp to start.  My banana breakfast didn't really make much of a difference in the pre-race stomach situation, although I will say it wasn't as bad as previous events (like the Coastal Challenge).  I took two Shotz gels with me for the race.  If I had more on hand, I would've taken three.  And I'm under the impression I'm good at organising... pfft.

I filled my small hydration pack and headed out the door at 6.15am with the address loaded into my phone GPS (saves on brain power, and I have zero navigation skills) arriving in plenty of time for the start of the race.  I caught up with The Usual Suspects sans Deb (who was in a netball tournament and had to play five to six games in one day, phew!!) and accidentally jumped the long portaloo queue by approaching them from the opposite side of the building they were parked behind and not realising until afterwards when I walked past all the people still waiting.  Oops!!

The race started at 7.30am and I quickly realised it wasn't going to be a nice flat course like I expected.  I have no idea why I thought it was mostly flat, but there you have it.  In fact, I'm pretty sure there weren't any flat parts to the whole course!

Ah well... It was a nice course all the same with beautiful views and peaceful surroundings, only occasionally marred by seeing this guy running towards me (click the link at your peril - if you feel the need to gouge your eyes out with a spoon afterwards, I'll understand, but don't say I didn't warn you!) - the course was pretty much an out-and-back with a couple of dog-legs so I got to experience it not once, but three times!  Lucky me!  I'm only glad I wasn't close enough to him in the pack as to have to run closely behind him... *shudder*. The up-side to the course plan was that I got to high-five my friends a couple of times on the way past :) 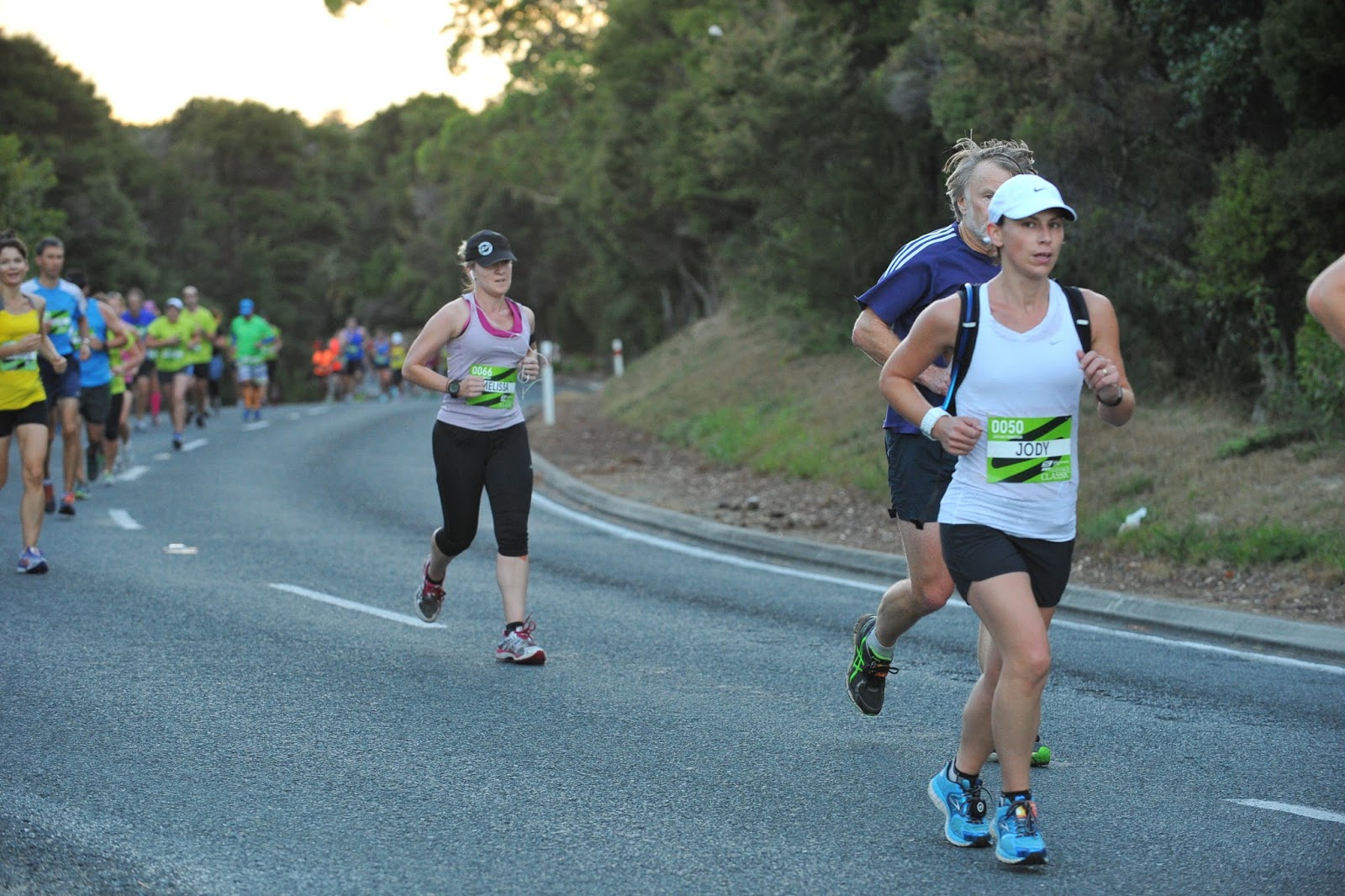 This is my 'Seriously? You're taking photos at the top of a hill? What's wrong with you?' look.  Well, at least I wasn't walking...

Despite it being all uphill or downhill I only took about four walk breaks, two of which were to down a gel (okay, maybe more like six walk breaks).  I hoofed it on the downhills to make up some time.  It did occur to me during one of them that perhaps I was burning a little too much energy even though it was a downhill, but then I was like, 'nah, you're good' and just kept going.  The last few kilometres of the course were blessedly downhill, apart from a wee 100m dog-leg.  The last two kilometres were my fastest at 4'57" and 4'59".  Hurrah! 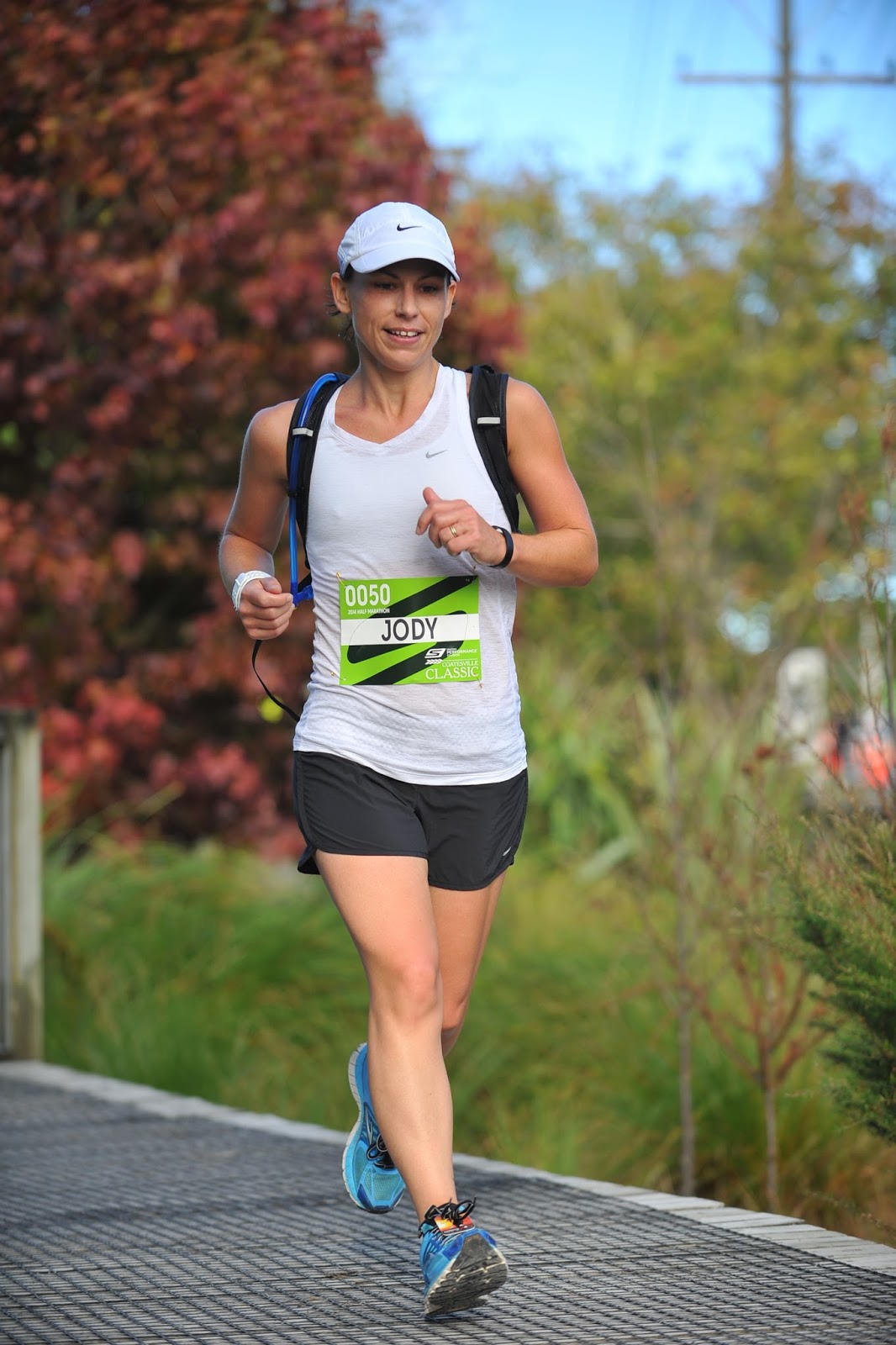 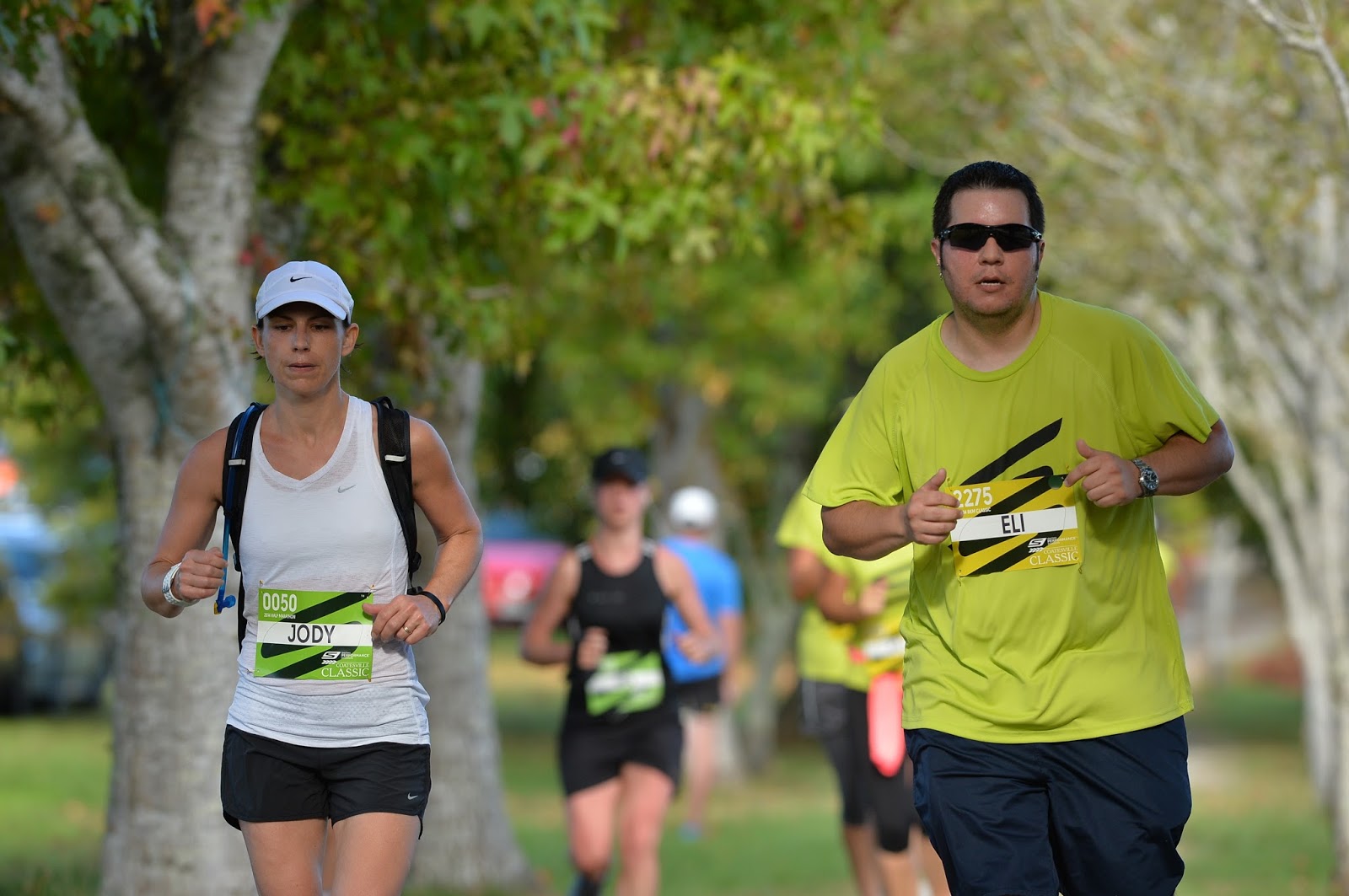 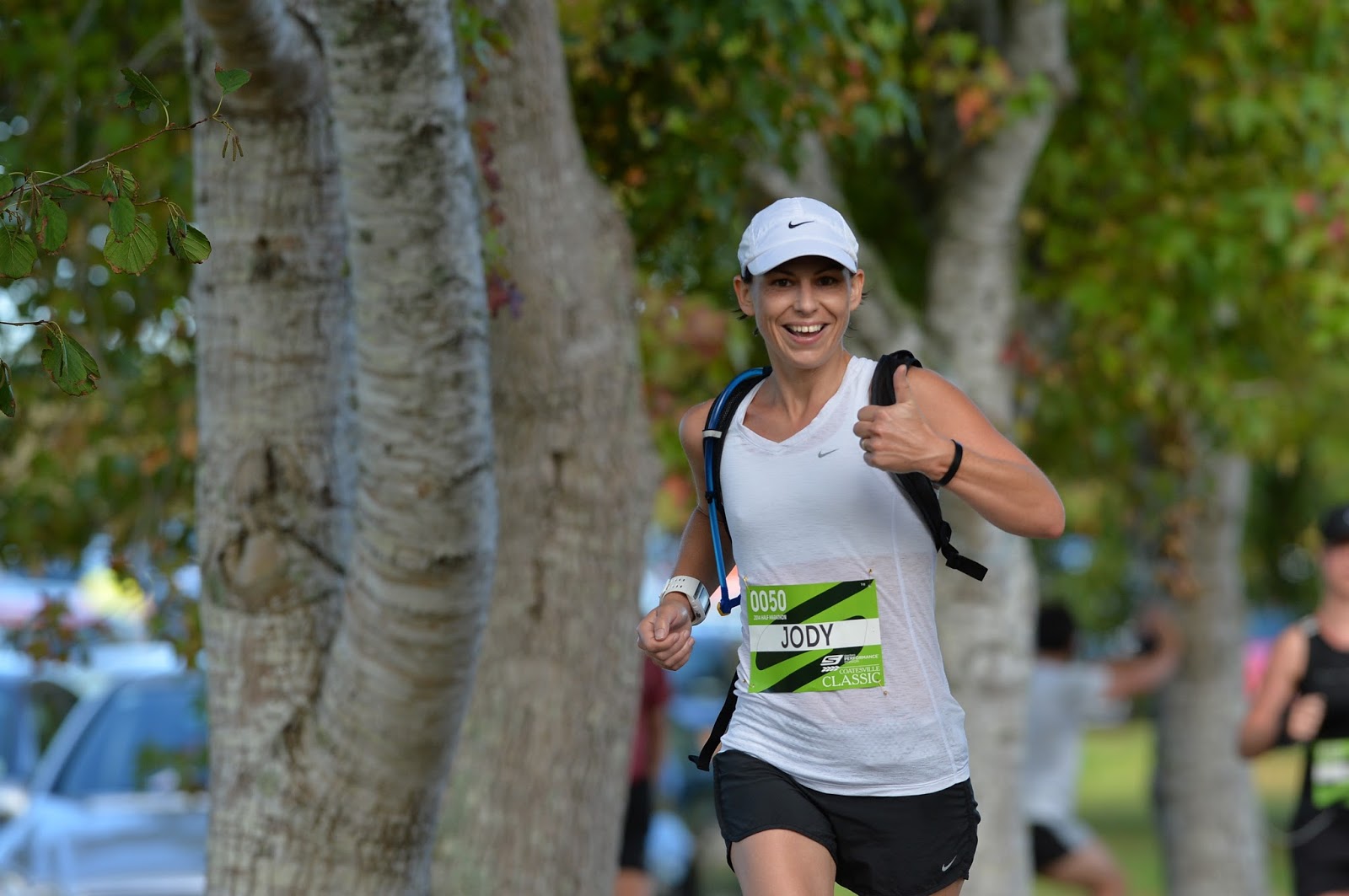 I finished in 1:58:09 officially, and had time to take off my timer chip and get back to the finish line to cheer on my friends who finished a few minutes later.  We all headed in to Browns Bay for a late breakfast/brunch at La Tropezienne. 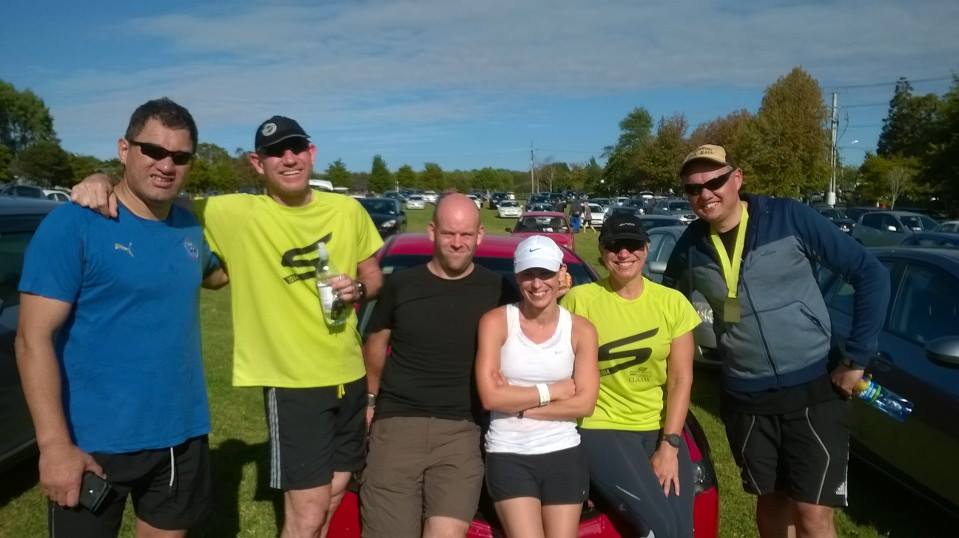 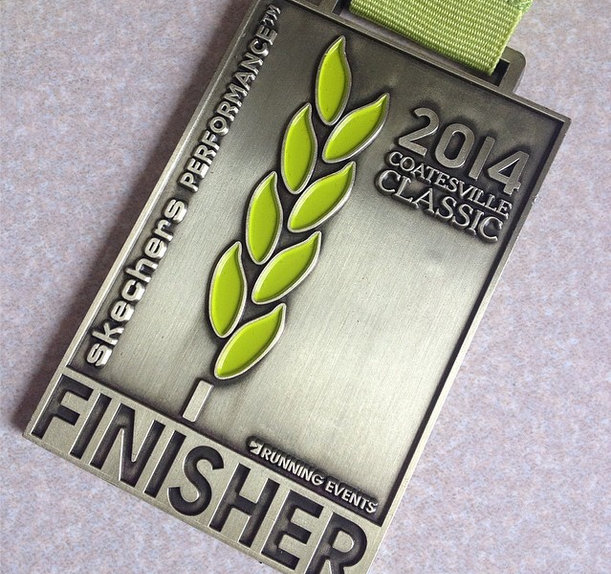 The Finisher's Medal in all its glory.

My time was way off my PB of 1:45:22 for a half, but it was hilly, and I'm not at the same level of fitness I was at last year when I clocked that time.  I'm working on it ;)  This week I've started back on the ol' HIIT (high intensity interval training), to start training for Tough Mudder in a month's time.  Better late than never, huh?  I think that's my catch-phrase for the week :)  I'd forgotten how hard it was, even though they're only 12 minute workouts!

Tomorrow we're heading in to the Waitakeres for the inaugural Hillary race.  My friends and I are running the shortest distance, 16km from Bethells to Muriwai.  Should be fun, and slightly less scary since they've widened the paths on the Te Henga track.  Yay!  So I'll be posting another race report next week :)  Until then, enjoy your weekend!
Posted by kreachr at 20:14