So yeah, this week started off totally different from what I had planned.

Plan
Wake up 7am Monday morning and get kids fed, dressed and off to school.  Go for a run (about 10-15km-ish), shower, post my sister's birthday present and all the goodies I bought the family back from Fiji, then spend the day starting my two new study papers until the kids finish school.  Get them stuck in to their homework then cook dinner and enjoy the evening watching stuff on TV and knitting something new.

What actually happened
Wake up at 7am on a vinyl mattress on the floor of a ward in the Starship Children's hospital next to T (because a bunch of doctors walked in and switched the lights on), skip breakfast (because T was nil-by-mouth) and wait patiently until he is taken to surgery, scoff a half-decent (non-gluten-free, vegetarian) sandwich for breakfast/lunch from a moderately okay hospital cafe and wander back to the recovery room to help wake him up (he didn't want to, must've been tired from the crappy sleep the night before), then take him back to the ward and spend the afternoon keeping him entertained until re-making my mattress on the floor and reading in the semi-dark while T and the kid he shared a room with sleeps, (soooooo glad I got a Kindle Paperwhite!!) interrupted occasionally by nurses coming in to do obs and administer IV meds.

Need some explanation?  Let's backtrack a little then, shall we...?

On Friday evening T came to me with a sore foot - I could see a tiny white spot near the ball of his left foot which appeared to be quite deep.  Apparently his foot had been sore for a couple of days, but T being T, he hadn't bothered to mention it (which then made me feel bad for insisting he do cross-country running practice at school).  There were no obvious signs of other damage (such as a prickle, bite mark, cut, etc), so I sent him to bed with some pain relief with the plan of keeping an eye on it over the weekend and taking him to the doctor on Monday.  Saturday morning I headed out to Devonport for my Coastal Challenge race (more on that later, in another post) and by that afternoon what had started as a tiny spot had grown to a 5mm circle, with a larger, slightly swollen area around it.  It was worrisome, but with the doctors closed over the weekend there wasn't much I could do except keep an eye on it and wait until Monday.  We kept up with the pain relief every six hours or so.

Sunday was a busy day with Deane out fishing and people in and out of the house.  We mooched around home (I lamented the fact that I was missing out on a 24km volcanoes run since Deane was fishing) and I was keeping an eye on T's foot which, again, had appeared to have gotten slightly worse.  By the afternoon, much of his foot was swollen and an ever-growing area on the top of his foot was red, with a line starting to creep up towards his leg.  Time for a trip to the emergency room, because it was obvious this couldn't wait until the next day!  By the time we got to A&E, the poor little guy was in some pain (although was easily distracted with a game on my phone).  They gave him more pain relief and put some numbing cream on his hands in preparation for an IV line. 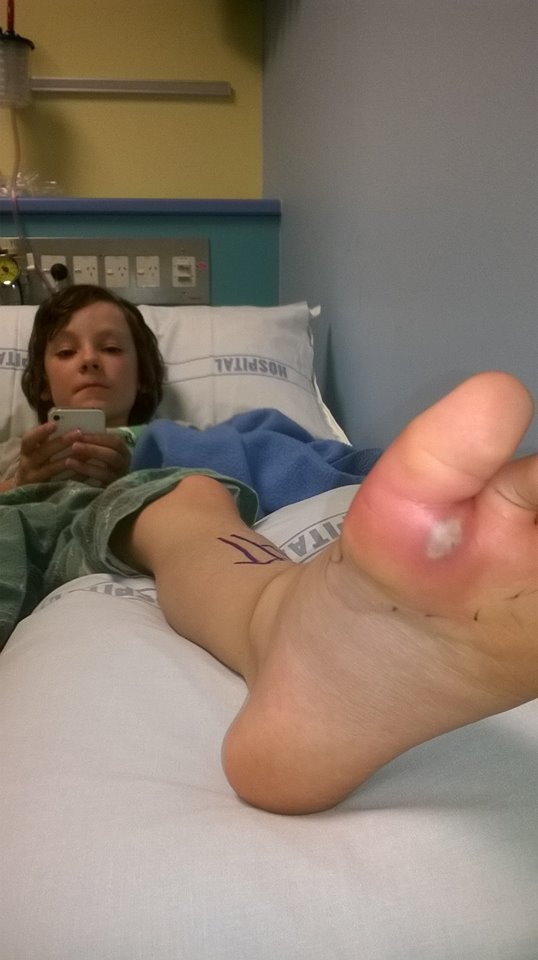 Waiting for admission into the ward, markers on foot/leg denoting infection spread.  Phone in hand for distraction.  Game apps are really handy sometimes!

He was admitted to the paediatric orthopaedic ward and lined up for surgery the following morning to drain his foot of infection.  We never found out the cause of it, but it was significantly deep enough that a doctor could not successfully drain it without surgery (they tried.  It didn't go well).  Our stay in hospital lasted until Wednesday lunch time, when he was taken off IV antibiotics and given a prescription for oral antibiotics along with instructions to stay off school for a week and physical activity for two weeks. 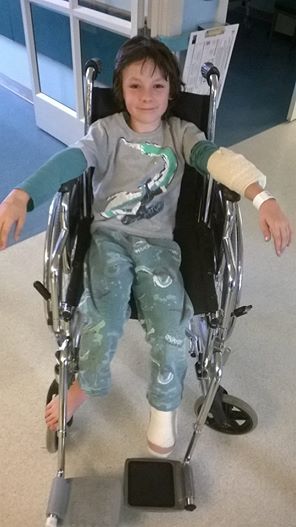 He was rather fond of the wheelchair ;)

It was nice to be home again!  T was getting bored, the kid he was sharing a room with was a pain in the ass (his symptoms were largely psychosomatic and boy, did he make everyone aware of them!), and although the hospital cafe food was tolerable, there was not much in the way of gluten free options and there were absolutely no vegan options.  Vegetarian was the best I could do unless resorting to an awful Subway salad or bananas and apples.

Thankfully there is a parents kitchen in each Starship ward, where you can make a cup of tea or coffee (no soy milk though, unless you bought it yourself, named it, and crammed it into any available space left in the fridge full of other named stuff that had likely been there for weeks and wasn't even needed anymore) and there was a microwave and a toaster.  I had ordered some gluten/dairy/soy/egg-free hot cross buns from Bakeworks the previous week hoping they'd arrive in time for a post-race treat.  At the time I was disappointed they hadn't, but that turned out to be a good thing - they were a god-send at the hospital, becoming two breakfasts and a lunch for me!  And they were sooooo goooood.  I must order more...

After the surgery on Monday T was in good spirits and very little pain - once the main issue had been dealt with his foot felt much better.  Unfortunately, there was a problem with the IV line in his hand - it had been placed incorrectly, or it had somehow shifted, so after a couple of days of administering antibiotics it had become painful.  They pulled it out, which hurt him a lot, and they discovered it wasn't actually in his vein (it was bleeding a lot, which it shouldn't do if placed correctly).  Getting a new line in his arm was one hell of a debacle - the poor kid was so frightened of the procedure he became hysterical and it took four of us to get him still enough to put it in.  Once it was in though, he settled quickly (because thankfully it was done properly and didn't hurt, nor did it's removal the next day) which was good - it gave me a chance to settle him back in to bed with a game on my phone, then dash off to the bathroom for a teary, snot-filled meltdown before recollecting myself and getting a nice strong soy flat white for my nerves.

Ah, parenting.  It's a daily challenge.  Don't let anyone ever tell you it's easy!

So today was our first full day back at home and I had so much to catch up on.  I haven't been for a run since Saturday's race, and I haven't even looked at my two study papers yet (probably should be doing that now, actually...).  But at least the laundry is done, the house is (ever-so-slightly) tidier, my sister's birthday present is on the way (although it'll arrive a day late) and everyone's had two home-cooked dinners - X was very thankful for that, having survived on takeaways while we were in the hospital.  I think Deane is too, although he probably wouldn't admit it.

T is small and relatively light (22kg) so rather than having to deal with a set of crutches (do they even make them that small?), I just carry him up and down the stairs or around the house, or he gets around on his own if he doesn't have to go far.  He got his dressing wet when he had his bath this evening (which was supposed to stay clean and dry until he's seen in the clinic next Wednesday) so I had to re-dress it with whatever I could find.  Tomorrow he's staying on the couch!  And I'm going to try my best to go for a run and get some study done.  Fingers crossed!  I don't like being behind on study, and the Coatesville Classic half marathon is next weekend so I don't want to be losing any fitness right now.

Also, having had to resort to sandwiches and toast for some of my meals in the hospital, I can say with some certainty that gluten does have an effect on my digestive system (I won't go into details, because seriously, that would be waaaaay TMI) but I quite clearly do not have an allergy or intolerance.  More like 'gluten sensitivity'.  Just like IBS, it's not a life-threatening issue so although I'll mostly avoid it for my own (and everyone else's) comfort, if I eat it every now and then I will survive ;)  Again, like IBS, it just takes a little management, diet planning, paying attention to my body and its myriad behaviours, and being prepared to deal with the consequences when I eat something I know I'll react to.  Everything in moderation :)

I'll fill you in on my race experience next post.  I hope your week was better than ours!
Posted by kreachr at 22:19