Sunday morning dawned, chilly but dry.  This turned out to be a good combination for the first XTERRA Auckland series race in Riverhead Forest.  I was prepared to get dirty, knowing it had a reputation for being muddy, and because we'd had a bit of rain leading up to the weekend.  I got up at 6.30am and decided on a light breakfast of granola with a cup of tea, but my stomach was true to its nature and I didn't get to drink the tea.  I packed a banana and a nut bar for later, as well as a bunch of Shotz gels for the run.  I've come to the conclusion that my best option is probably to not have breakfast on race mornings, and eat after I've left the house.  I'll be trying that next time!  I had to pick up a fellow runner whom I'd never met - she's also participating in the series but has no transport.  My timing was perfect, as she stepped out the front door just as I pulled up.  We introduced ourselves and got chatting straight away - the conversation was a good distraction from any nerves.  As usual, I didn't feel nervous about the run, but my stomach had its own opinion.

We arrived with oodles of time to spare - my race briefing wasn't until 8.45am and it had only just gone 7.30!  Plenty of time to mingle and catch up with friends that were also early, get our race bibs and timing chips sorted, meet some new people, and visit the portaloo (always fun ;P).  I also had plenty of time to scoff the banana and not have to worry about it coming back up mid-race.  We were lucky to be able to park really close to event HQ, so I didn't have to do a gear bag drop - we just left our stuff in the car.  Yay for being early!  Finally 8.45am rolled around, so I stripped off my outer layer, donned my trail pack, and headed off to race briefing.  Then spent the next 15 minutes standing around chatting because Marty and I were so far at the back we couldn't actually hear what they were saying.  Race briefings are much the same - look out for your fellow runners, be courteous, if anyone's hurt check on them and alert the nearest course marshal, stay on the marked trail for your own safety, yada yada...  There's always a rundown of the course that I'm sure nobody ever remembers or even pays attention to, and since I'm no speedster there's always people and/or markers to follow anyway so I'm unlikely to get lost - I assume ultras would be the only exception to this, but there's no chance of me running one of them any time soon so it's a moot point.

Although Marty was running the super-long we had the same course route up to about his halfway mark, so we stuck together until then.  The first 2km or so was a slow uphill on gravel road, then there was a bottleneck to get onto the single track into the forest.  Within minutes the bottoms of our shoes were muddy and covered with pine needles.  The mud in the Riverhead Forest is very sticky and I found the squelchy noises rather entertaining at times.  What I enjoyed most about the course though was the fungi.  So many varieties, it was like running through a fairy tale woodland!  I was gutted that I didn't have my phone with me to take pictures.  Luckily there's another XTERRA race in Riverhead later in the year, so I'll try to get some pics then.

Being conscious of the fact that I'd only eaten a small amount, I downed a gel at about 5km.  Well, more like 5.5km, since the 5km mark was on a slippery downhill section.  My coordination isn't exactly top-notch, so I thought it best to wait until I was on slightly flatter terrain before trying to suck goop out of a foil pouch.  I had planned to have another at 10km and at 15km, but decided that was a little bit overkill.  By 10km I was still going strong and didn't feel as though I needed one quite yet.  Having said that, there was a rather steep, slippery uphill section shortly afterwards that sapped a bit of energy.  Climbing a steep uphill is hard enough, but when you add mud into the deal it becomes just that little bit more challenging.  It was slow going!  Marty and I parted ways at around 12km and I had my second gel not long after, just for the hell of it.  It gave me a good excuse to take a walking break on the boring gravel forestry road ;)  Thankfully the road section wasn't too long, and we headed back into the forest soon afterwards.  I ran most of the last section alongside a lady that had very interesting hair - it was a short cut in her natural greyish-white, but with splashes of hot pink and black all over.  Not your average hairstyle!  We had quite a few laughs while slipping and sliding in the mud - the trail was quite narrow in parts, and slipping was unavoidable much of the time.  I nearly face-planted once, tripping on a tree root that was hidden in the mud.  I managed to narrowly escape a full body-slam by landing on my hands, and got a handful of tiny prickles for my trouble.  They bothered me the rest of the run, as I couldn't close my fist or touch anything.

The course, which was supposed to be 19km, turned out to only be 17.  All of the courses were shorter than stated, but I don't think anybody was complaining.  I crossed the line in 2:05:04, smack-bang in the middle of the pack for my age division (20-39), and 20th out of 37 women overall for the long course run.  Okay, but not great.  Meh.  As always, I'm not out to win (because that would only ever happen if the entire field mysteriously dropped out), but I had a ton of fun.  The scenery was beautiful, the mud was perfectly muddy (although the next Riverhead run is going to be a lot slipperier I think), and I got to hang with my friends - 'the usual suspects' and a few new ones.  I lined up for my cider (because beer is ick) and non-sausage (I grabbed a slice of bread and some fried onions with tomato sauce, lol), used a sticky plaster to pull the majority of tiny prickles out of my hand, and waited for Marty to finish.  He had a little trouble on a slippery steep part of the super-long course and injured a calf muscle, so he was a little hobbly when he crossed the line much later than we expected. 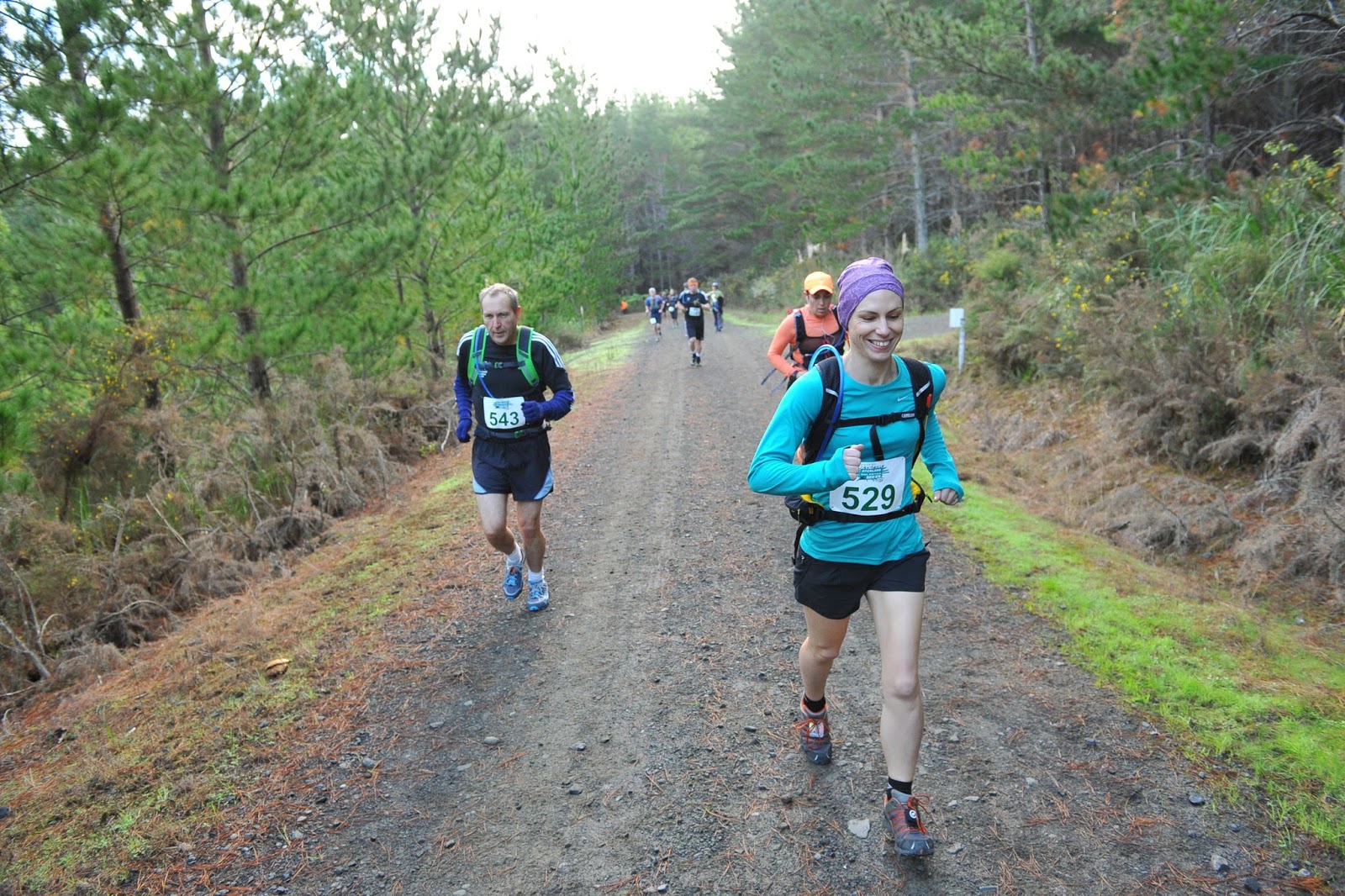 Beginning of the race, nice and clean 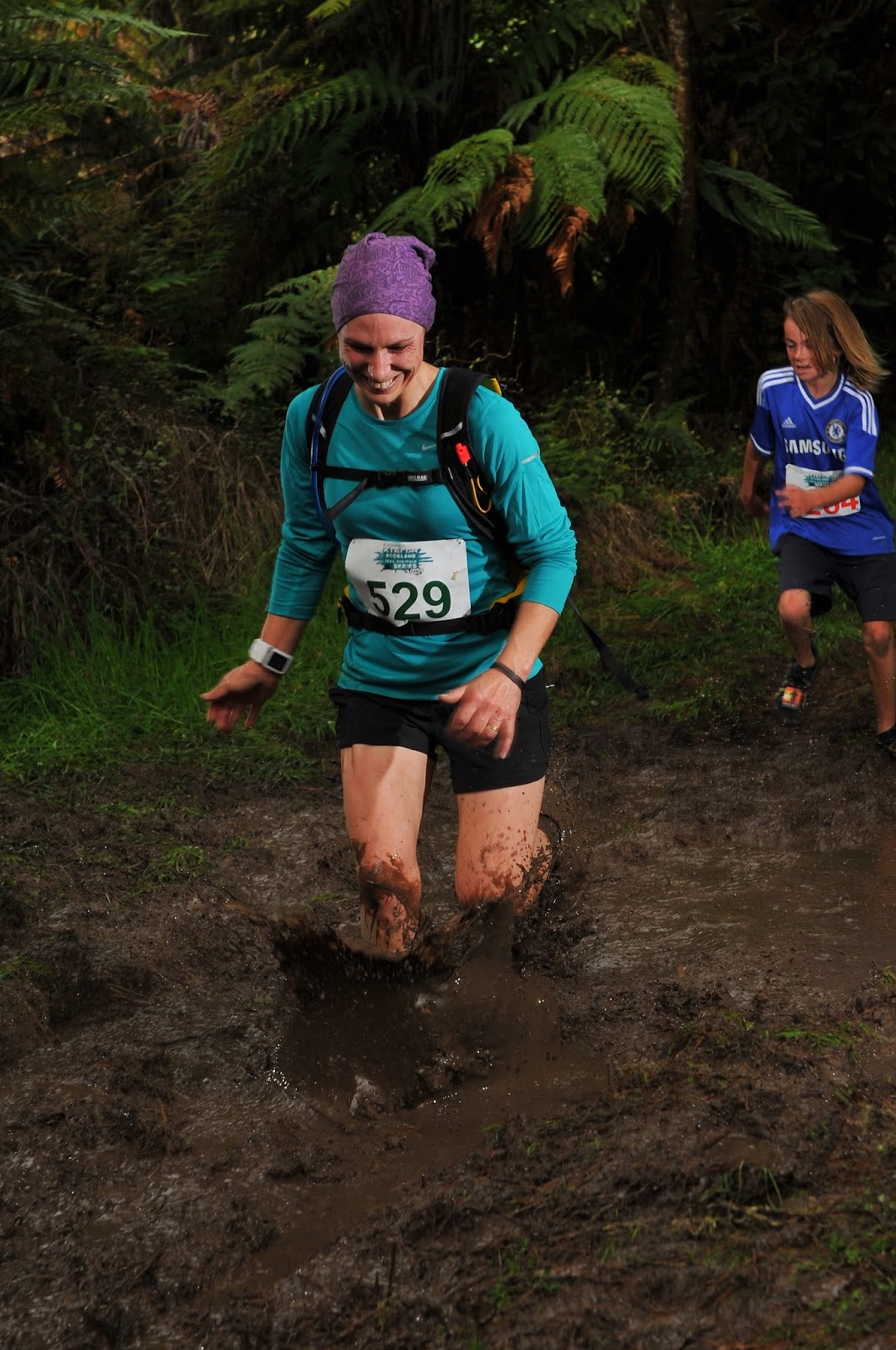 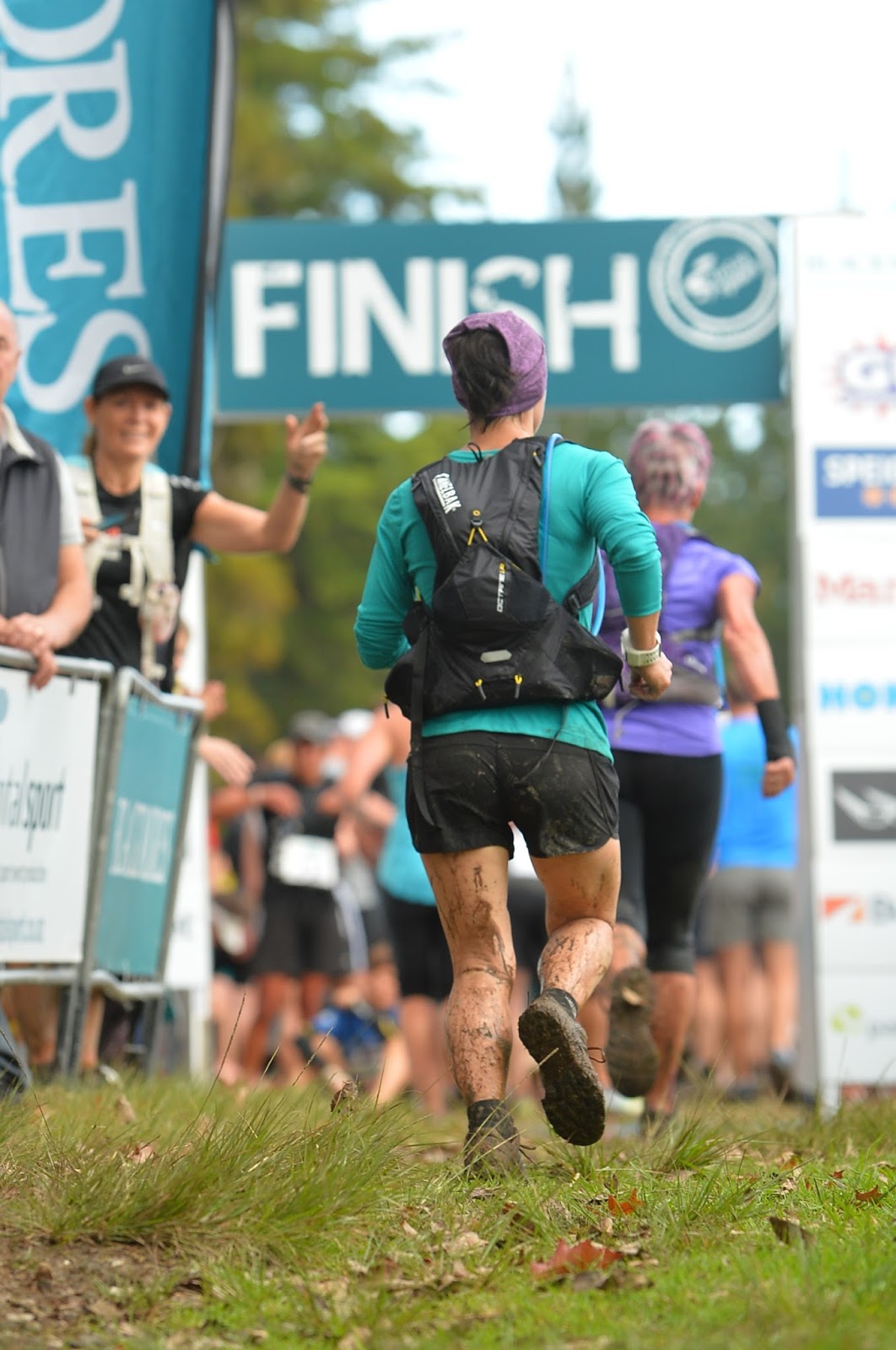 Check out the mud on those legs :) 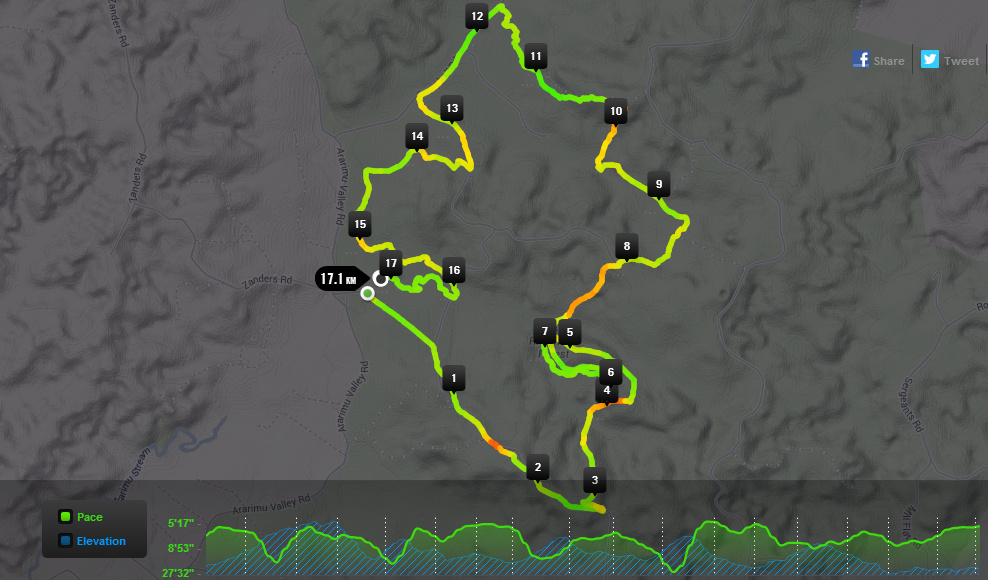 We decided to stop somewhere for lunch on the way home, which probably wasn't the best idea.  We struck out twice before finding somewhere that had room to seat all eight of us, and it took over an hour for our food orders to arrive.  Coffee afterwards took another half an hour.  Not good when you're rungry!  We weren't sure if it was because it was Sunday, or because everything is so laid back in Riverhead.  There did seem to be a large number of people about...  Still, the food (and the coffee) was good despite the wait, the atmosphere was relaxing, and we enjoyed just sitting around and blabbering whilst looking horribly out of place in our various running attire.  Most of the mud was hidden under the warm clothes we'd covered up with, thankfully...  The rest of the day was rather uneventful, as expected.

Monday was spent getting stuck in to housework that hasn't been done in I don't know how long, and Tuesday was all about drinking buckets of coffee in order to try and stay awake while studying.  I'm pretty sure it was the reading material putting me to sleep, and not the 5.20am wake up for a rather fantastic 15km run before sunrise: 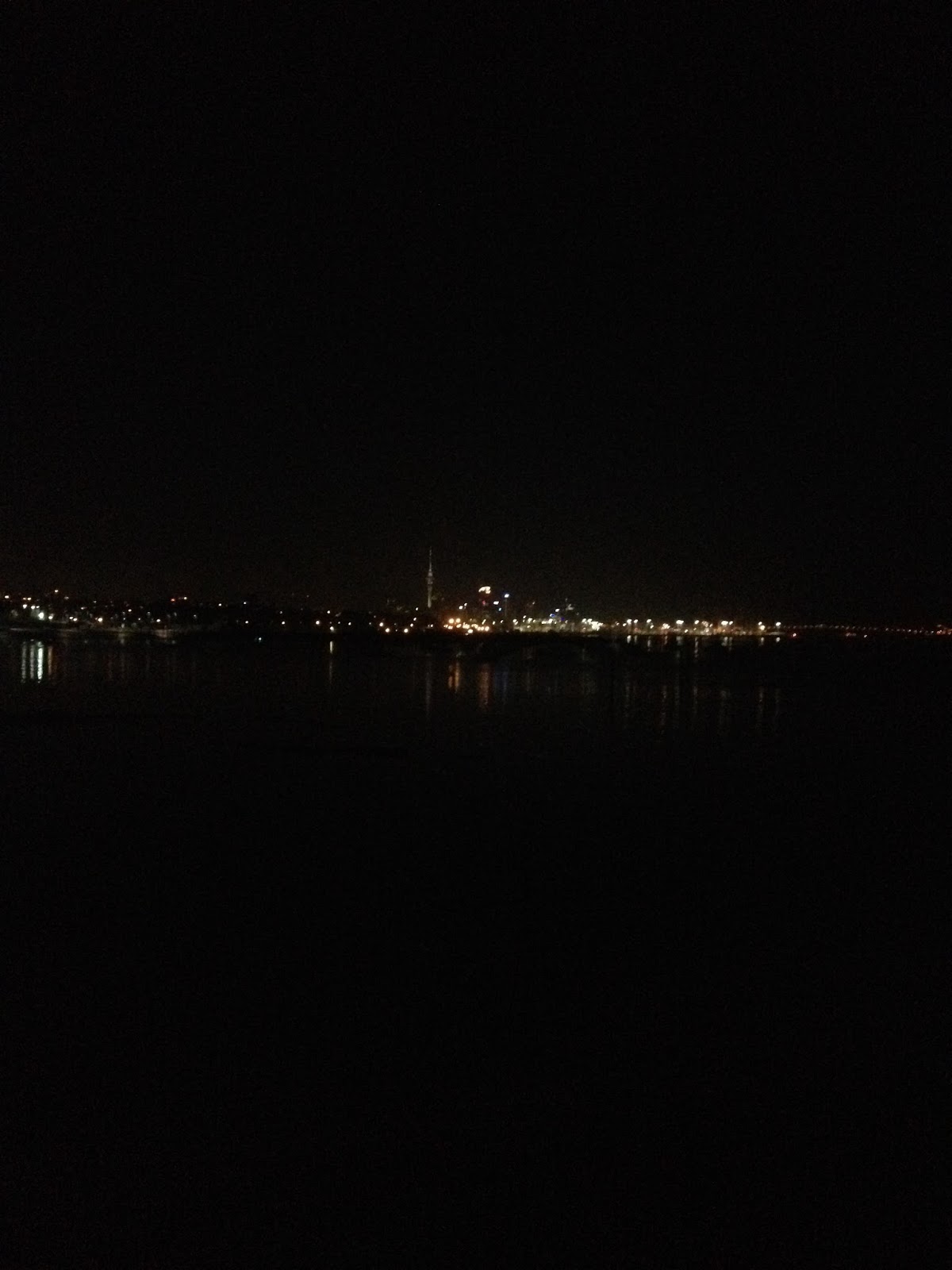 Halfway turnaround point of the run, about 7.5km from home.  This is the best my phone camera could manage - you can sort of make out the Sky Tower in the middle of the picture... 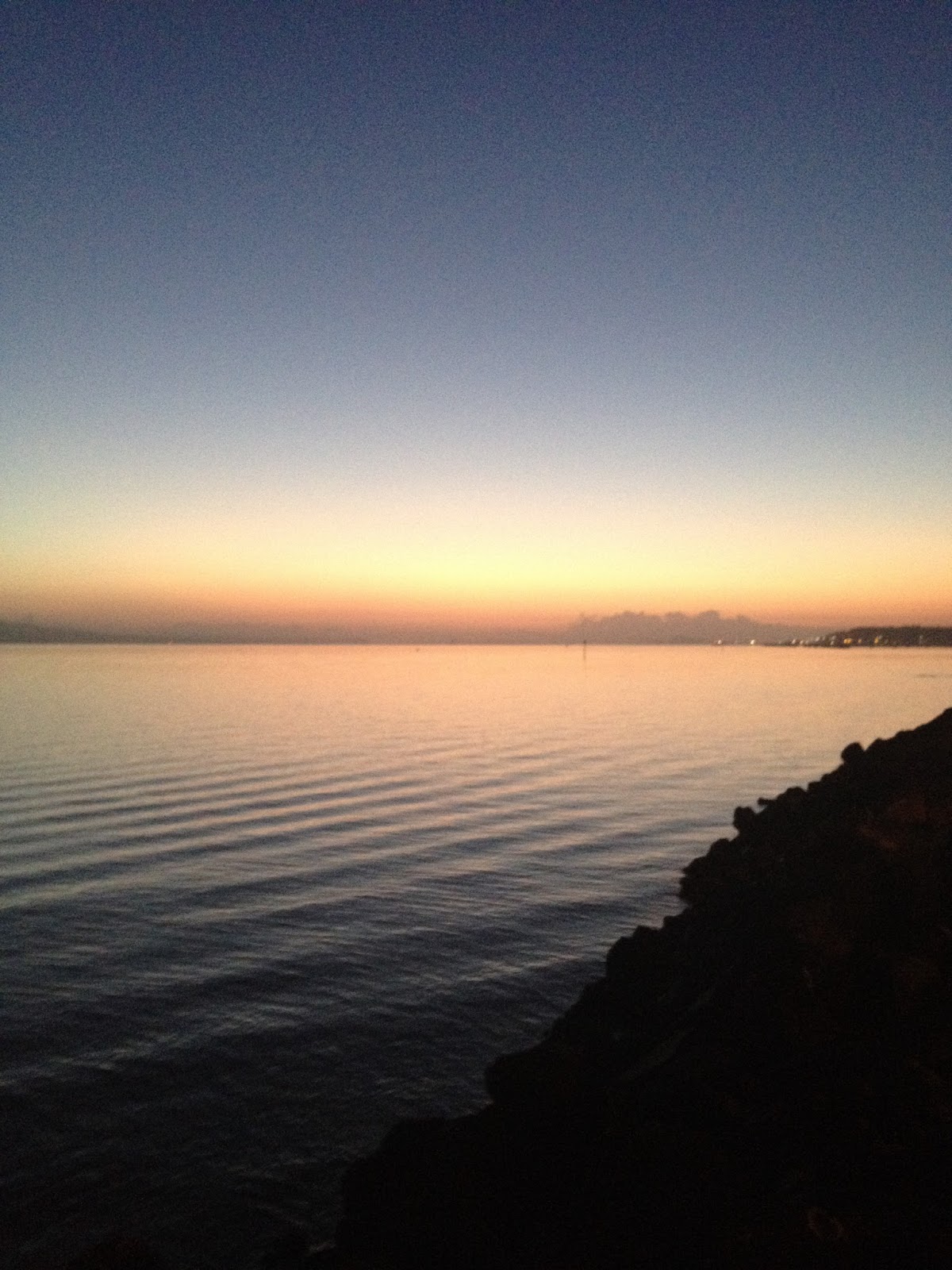 End of run (or rather, 4.2km from the end of it if you want to be pedantic)

There was fog that morning, and I felt it before I saw it.  Being still rather dark it was hard to tell, but the air temperature dropped quite noticeably when I neared Okahu Bay.  Once I got out from under tree cover and had more street light, I could see the layers of fog hanging in the air across the road.  It was fun listening to the cyclists chattering about it on their way past.  I turned around shortly afterwards to head home so I could get the boys ready for school.  The homeward leg was faster than the outbound, partly due to the time constraint, and partly due to the absolute joy I felt in running while watching the sun come up.  I hadn't taken any gels with me that morning but didn't feel the need for them at all.  It's become a habit, I think, to have a gel every 40 minutes or so during a run.  That's okay if you're going to be out for two hours or more, but for anything less than that it's probably a waste of time (and $3 a pop).  It felt good to just run.  So I'll be leaving the gels at home for future early morning runs, unless they're of the longer, slower trail variety.  We're planning a run in the Waitakeres this weekend - some of the group are running Piha to Bethells, and others are continuing on to loop back to Piha.  The plan is for me to be in the latter group - all up it should be about 30km.  I'll definitely be needing some gels for that!  And a banana, and some PB sandwiches, and probably some nuun...

I was very happy to get my assignment result back on Tuesday as well.  Remember that horrendously long, 15 page assignment that was kicking my butt a couple of weeks back?  I got 80% for it.  Soooooooo relieved about that!  Of course, now I just have to worry about the assignment that's due next Thursday for my other paper that I haven't started yet.  I'm trying to work through the course materials, if only I could stay awake while reading them...
Posted by kreachr at 19:24