Well heck, if that wasn't the best day ever, then I don't know what is.

I went to bed Friday night at around 10pm, which was later than I was aiming for but I wasn't overly concerned.  My plan of attack was to just relax, enjoy the experience, and take everything as it comes.  I set the alarm for 4am, made sure everything was packed, and put a big sign on the door saying 'TRAIL SHOES' since they were still drying in the hot water cupboard - there'd be nothing worse than driving all the way to Rotorua and discovering you'd left your running shoes behind!

I managed to get a bit of sleep, but it wasn't particularly restful.  I was awake some time after 2am and didn't get back to sleep, so just fluffed around checking social media for a while then got up at 3.30am.  Figuring it would be pointless having breakfast at 4am when the race wasn't until 10, I just made myself a cup of tea, another for the road, packed all my extra bits and pieces then headed out to get petrol, pick up Martin, and we were on the road south by 5.15am.  The drive was lovely, the sunrise was amazing, and it was really cool being able to see the full moon to our right and the sunrise to our left.  I didn't get any photos since I was driving and didn't want to pull over, but y'all have seen plenty of sunrise pics already, right?

We stopped in Rotorua for some breakfast and a coffee, then continued on to Lake Okaro.  We got there at about 8.30am, which gave us over an hour to fill in before race briefing.  We were more than okay with this!  The cool thing about smaller races is the chilled out atmosphere - there is a significant lack of crowds (yay), everyone is relaxed and in no particular hurry, there are no issues with parking, no booming loud speakers... just a handful of people in beautiful surroundings, there to have a good day and enjoy some trail running fun. 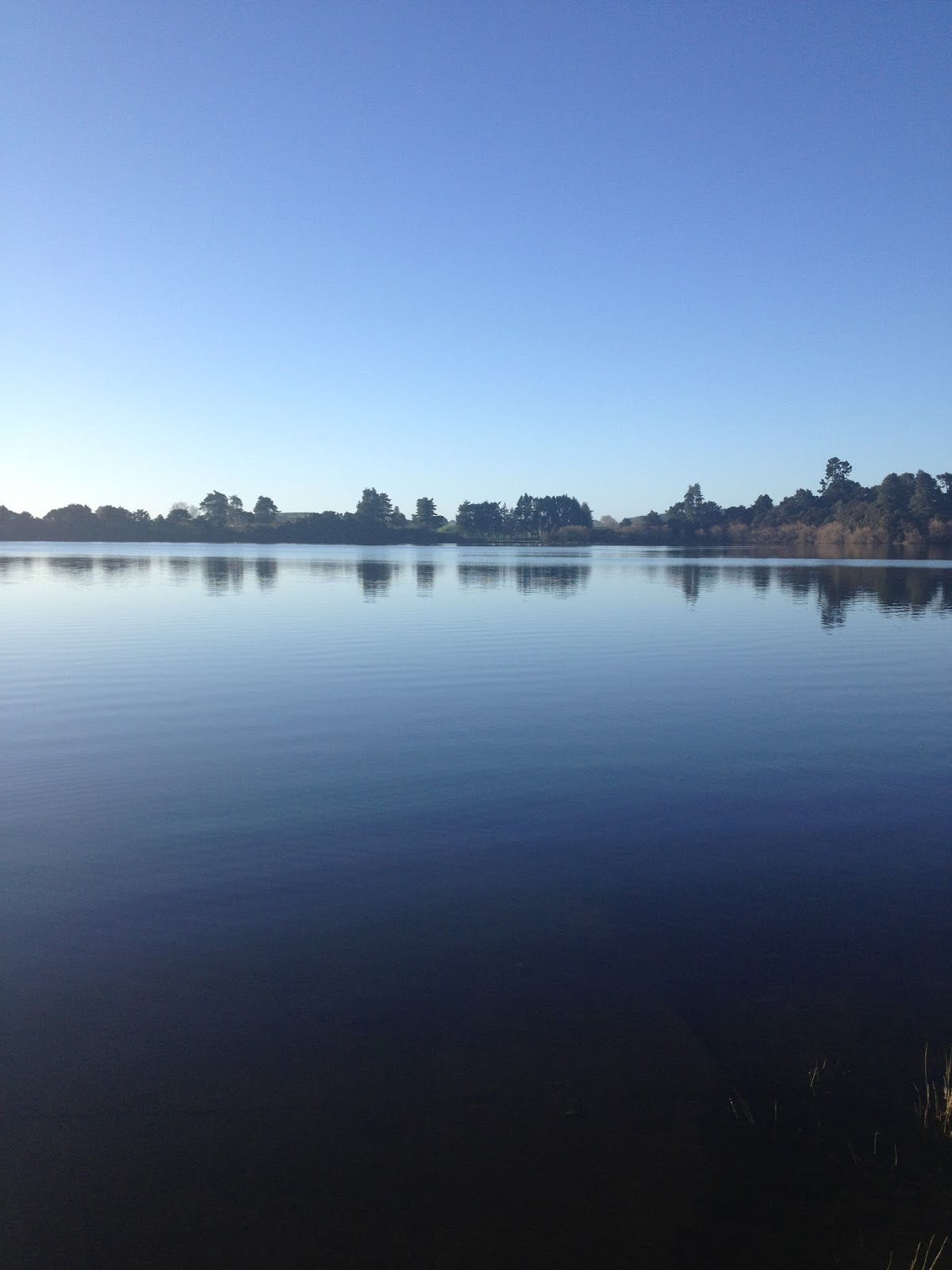 We checked our gear, packed our snacks, got our race numbers, and bounced around a bit to keep warm (it was about 5°) until it was time to go.  As usual, I started out too fast in the first few kilometres and was really feeling it.  Also, because of the low temperature my nose was running constantly and I had to keep sniffing so it wouldn't drip everywhere.  Gross, I know.  And the annoying thing was, this continued for the entire race!  Ugh.  Anyway, after a while I managed to regulate my breathing to my usual rhythm for running (breathe in for three steps, breathe out for three steps) and we got into a good steady pace.  Martin was kind enough to stick with me the whole way and go at my pace which included a lot of walking up the hills.  And I mean a lot!  It wasn't until quite far into the run (about 9km) that the hills got steep enough to justify walking, and from there it was very stop-start all the way to the top.  At the bottom of the steep incline there were some marshals jotting down race numbers and clocking times, and another set of marshals doing the same up the top, so they could give you split times for your ascents.  Unfortunately, it appears they only logged our first lap and not the second so I can't compare.  We took 26:25 to get up the hill - the fastest ascent was 15:43 by the machine that is 15-year-old Reegan Absolum.  On his fourth lap no less!  I suppose for someone who runs the full Hillary Trail for fun, four laps of Rainbow Mountain isn't going to be much of a challenge...

The views from the top were, as expected, rather spectacular.  Unfortunately my phone battery died and I only got a couple of pics: 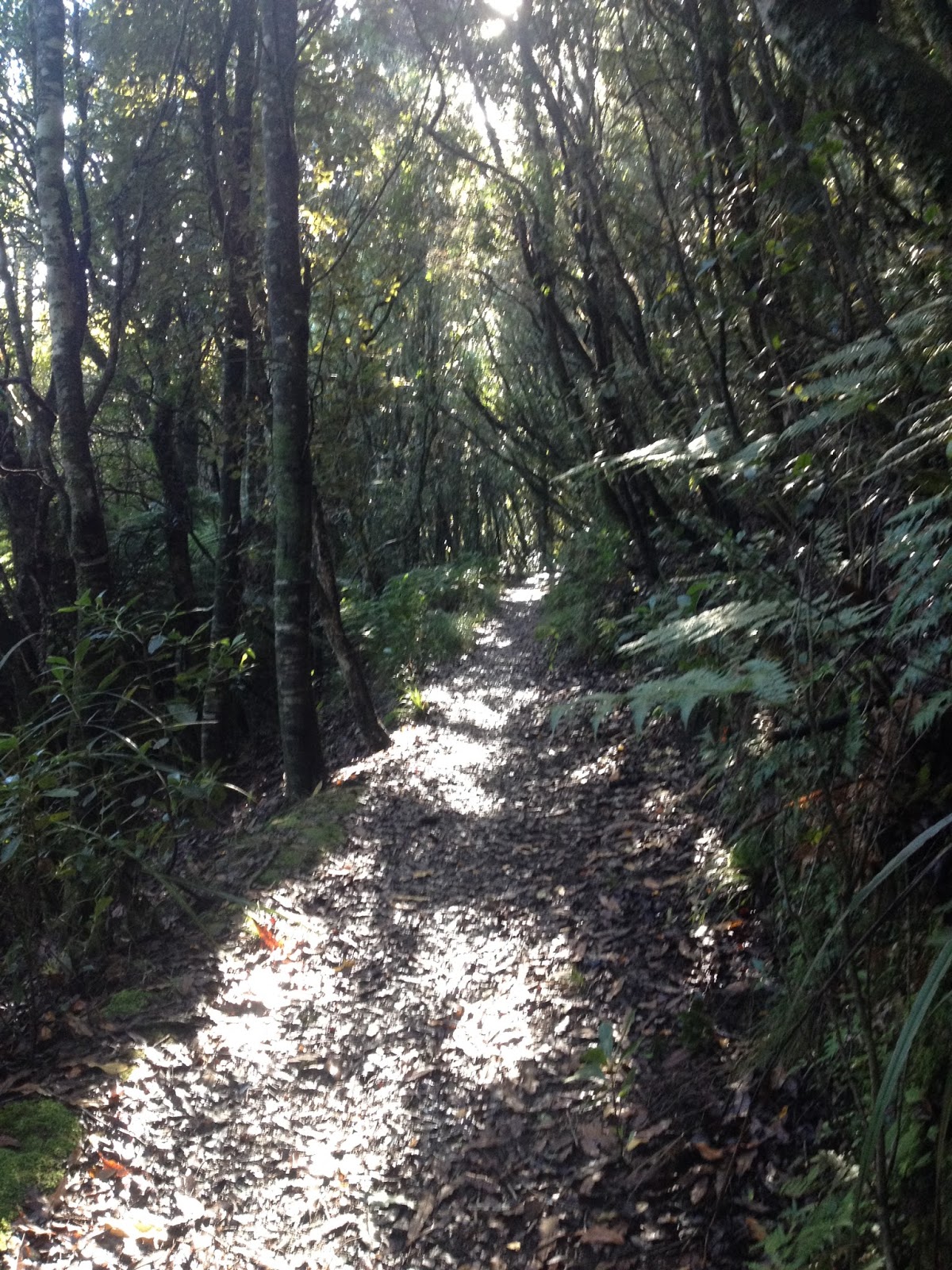 Part of the trail on the way up 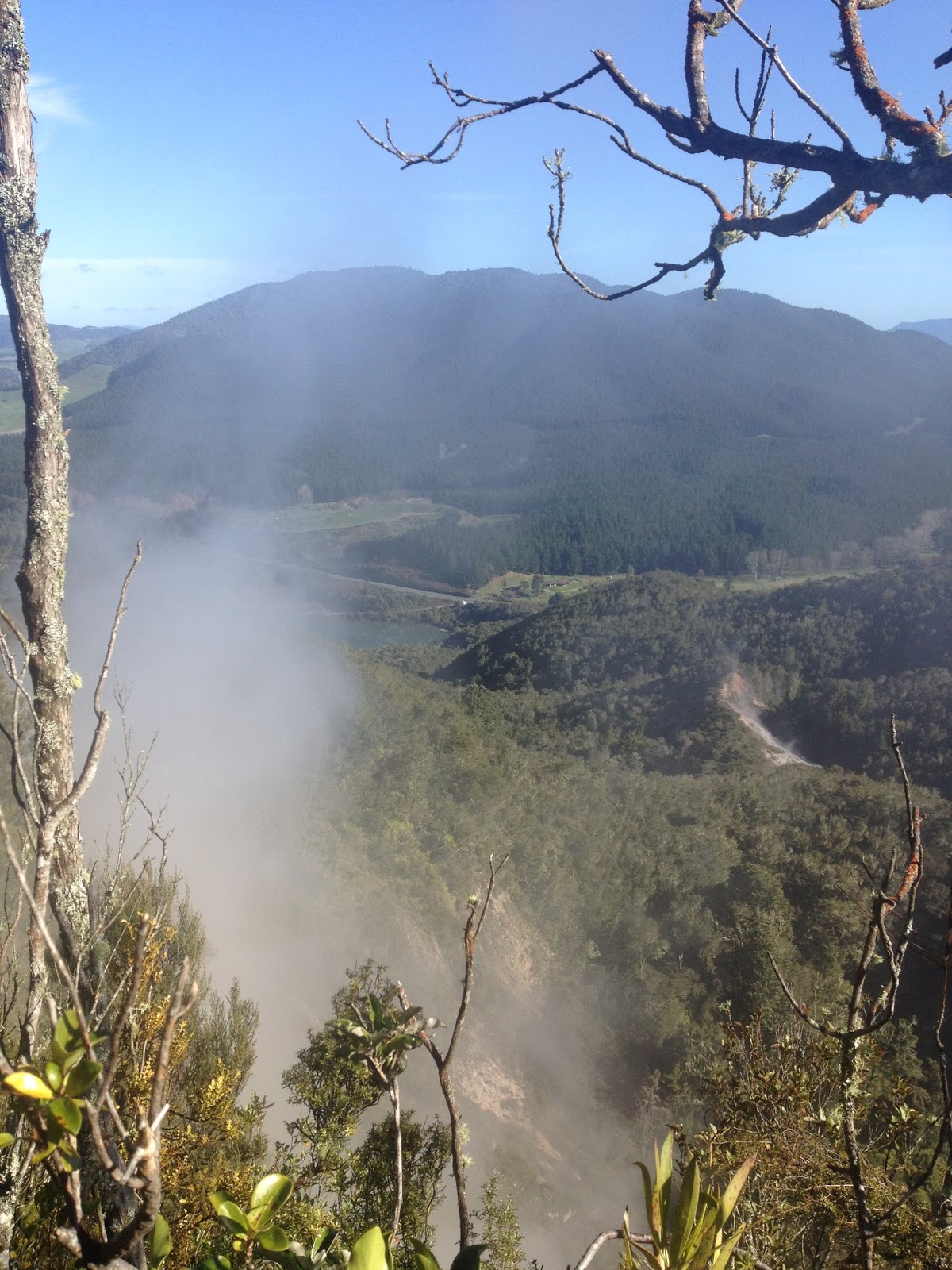 The view from (nearly) the top - geo-thermal activity included 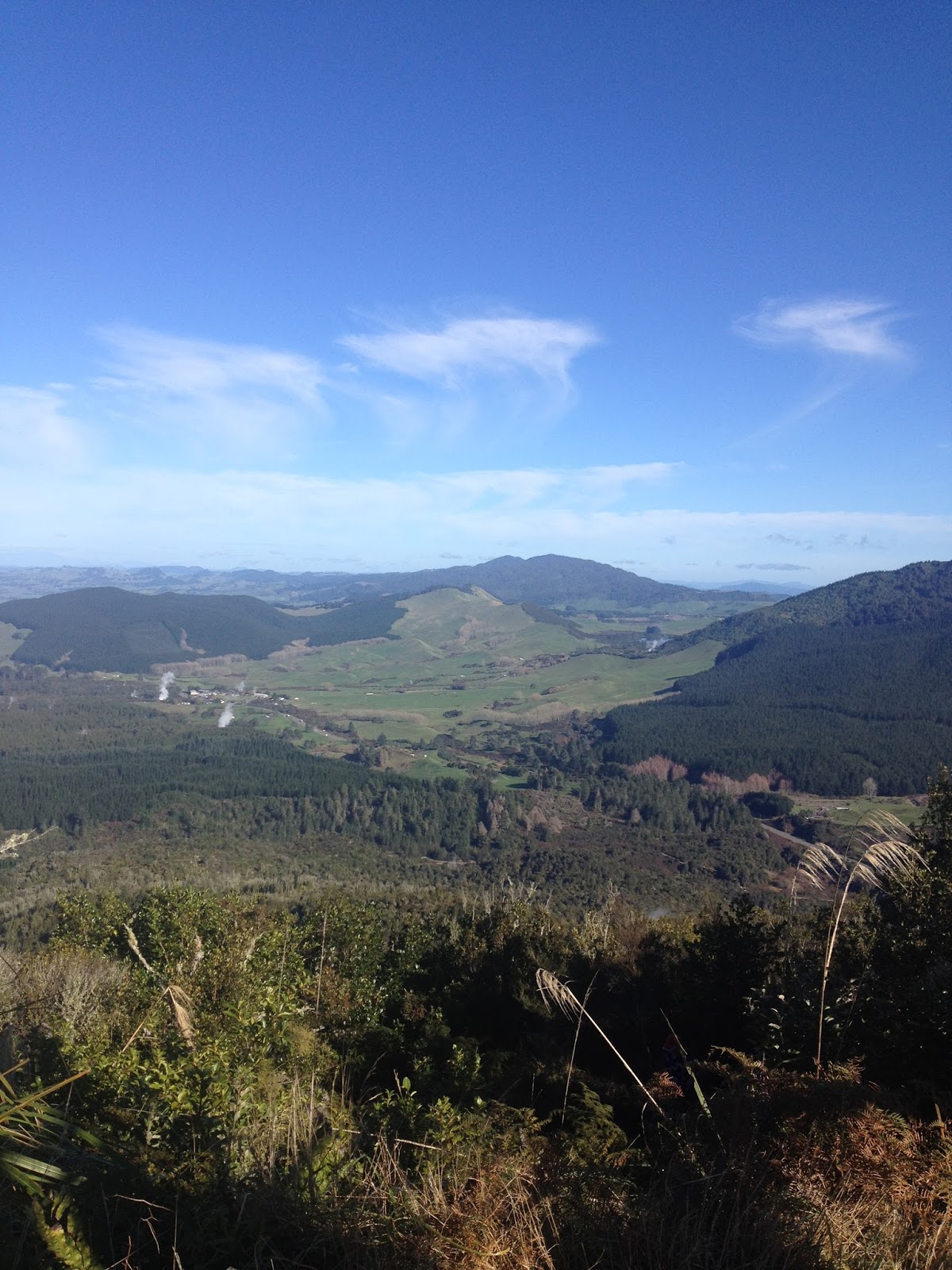 The view from the (actual) top.

There was a much better view over the other side with lakes etc, but I missed it.  Marty got pics, but I don't have those to share with you yet.  The aid station at the top was awesome - they had marmite and potato chip sandwiches!  YUM!!  We had a bit of a munch, grabbed a few lollies, chatted with the lovely volunteers, and headed down.  The first descent was pretty full-on, and required a lot of concentration.  A little further down the mountain there were spots of frost - you could actually feel the temperature change on your legs while running through it.  It was pretty cool (har de har har).  The second trip up wasn't too bad I guess - knowing what you're in for kinda helps.  It was during this trip that Reegan blitzed past us - he was fair booking it, so I figured he'd be in for a good finishing time.  We stopped to chat to some people the second time around too - remember the cute little Asian couple I mentioned that were at The Hillary?  The wife was at the top of the mountain, ready to take pictures of her husband (whose name is Ronald).  Turns out he was doing the 46km event.  Impressive!  (And even more impressive is that he ran a 10km race the next day!!)  We've seen them at a few races (he's doing the XTERRA series) and every time I see them, it just makes me happy :)

The second descent was less steep, but longer in distance and it got kinda boring since it was mostly gravel road.  Marty's a good conversationalist though, so it wasn't too bad.  We had quite a few laughs during the race - running with somebody else definitely makes for a better race day I think.  My finish time was 3:31:57 - I was 5th in my division.  Out of six.  LOL!  It sounds a tiny bit better when I say I was 23rd out of 39 in the 25km distance...

We grabbed a beer and a bite to eat (there's always plenty of food at Lactic Turkey events, we didn't need any of the gels or snacks we packed), washed the cow poop and mud off our shoes in the lake (sooooo cold!) and changed into some warmer clothes so we could hang around for the prize-giving.  We saw Ronald come in from his race, and his wife was in such a rush to run down and get pictures she dropped her bag!  Bless her.  So cute!!  I won a case of Auro gluten free beer from Kereru Brewing Co. as a spot prize - this beer was also the after-race beverage (and wasn't actually too bad*, so I might even drink some...).  Then it was time to get back on the road and head home.  The sunset was just as beautiful as the sunrise, and the moon was even more impressive than the one we'd seen that morning.  Again, no photos.  Slack.

I was very happy to come home to freshly made pumpkin soup for dinner :)  It was a long day, but a very good one.  The run was challenging, but I enjoyed it, and know I could've put more effort in if I wanted to.  I'm saving some up for Waihi ;) 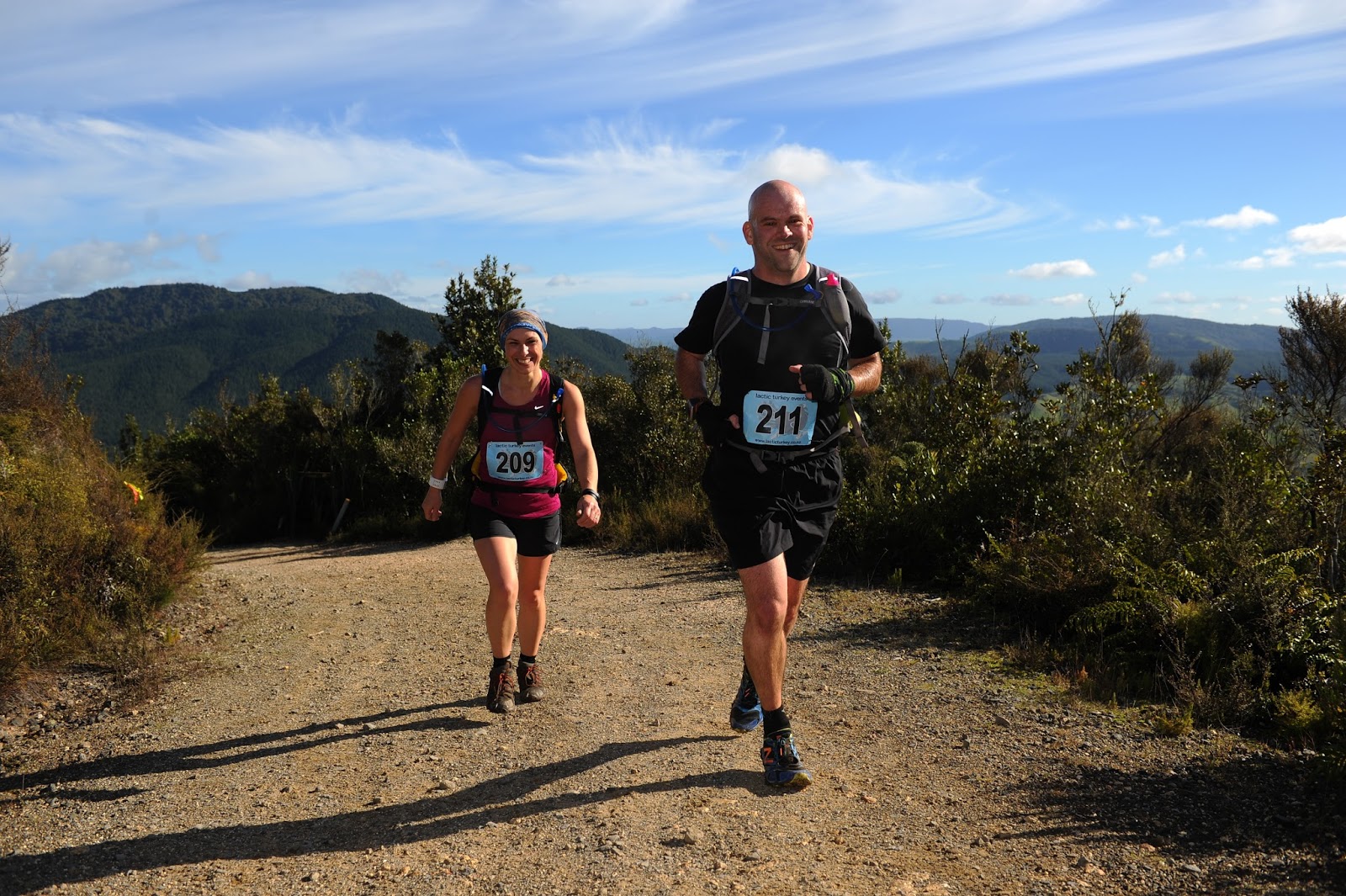 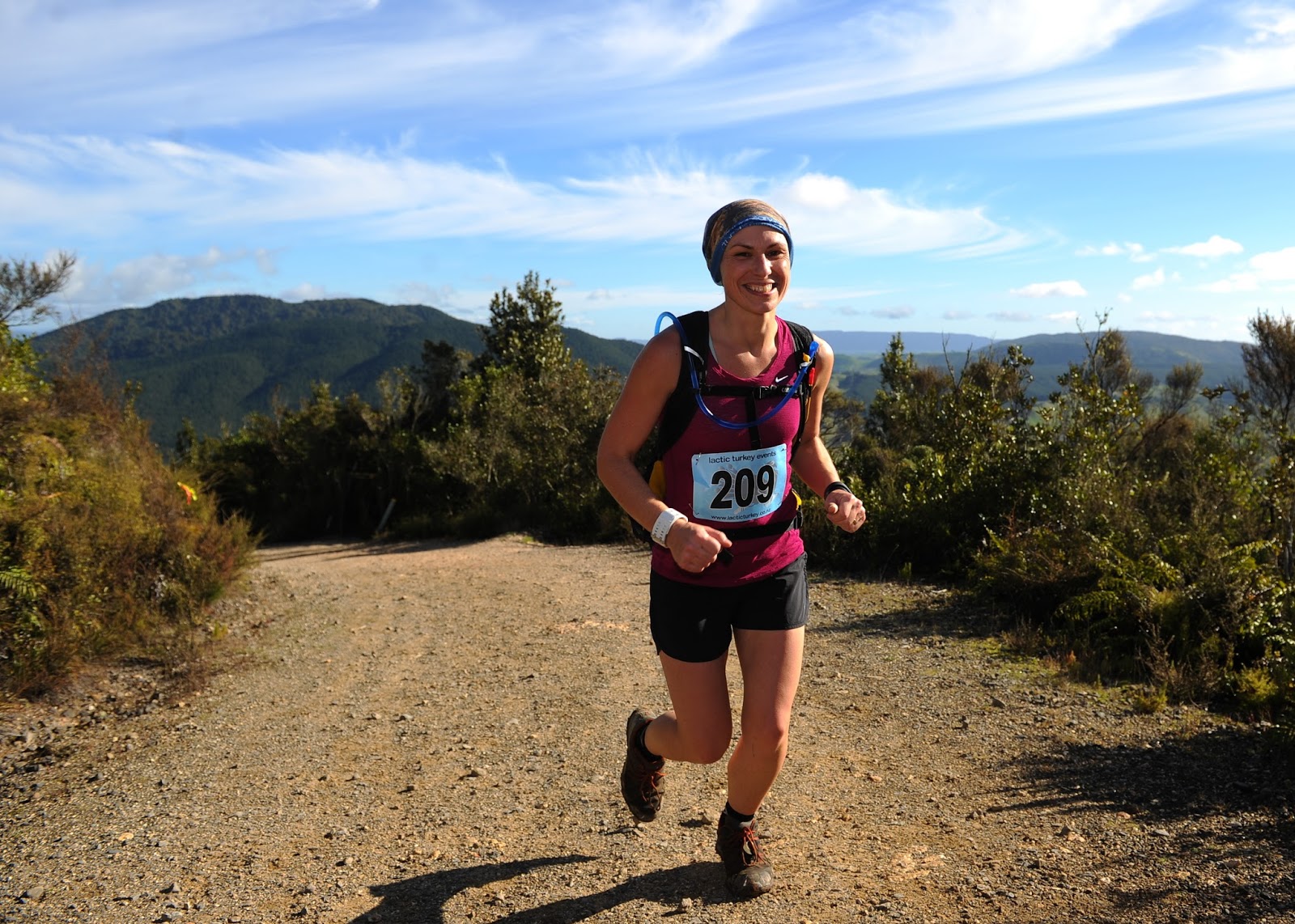 * Opinion of a non-beer-drinker.  Might pay to check for yourself.
Posted by kreachr at 14:09