I had a blast on Sunday!  The hills were pretty meaty, but they had the most amazing views!  And the downhills... there is nothing quite like haring down a hill at breakneck speed, whizzing past everyone!!  Of course, they're plodding past you quite successfully on the uphills later on...  (Note to self: put in more hill training time and sign up for 'Beat the Hills').  So anyway, recap!

The morning started out beautifully: I managed some PB on toast for breakfast, and a whole cup of tea!  Yay me!  I picked up my 'extra', loaded the address for the race into my phone GPS, and we headed off to Shakespear Regional Park.  Again, we got there with loads of time to spare so there was no rush to grab our race numbers and timing transponders.  It was a little chilly but not too bad, so I didn't mind standing around in my shorts with one extra top layer.  There was a 100% chance of water, so I figured shorts were the way to go.  The temperature was hovering around the early teens so I knew I wouldn't get too cold during the run.  I had decided to go with my small, basic hydration pack rather than the full trail pack this time, and just stuffed a couple of gels in my back pocket, which was sans phone because of the expected water section.  I found Martin, we shucked our extra layer, then headed to briefing with no particular hurry.  We could hear what they were saying this time, but didn't really pay attention anyway.  As I've said before, they're all pretty much the same.

At 9am the starter horn blared, and we were off.  Surprise, surprise, the start of the run was an uphill section!  It started with a gravel road, then we got to the grassy hill part of the heritage trail, which was quite steep in parts.  The views were spectacular, and the field opened up quite a bit before we got into the trails. 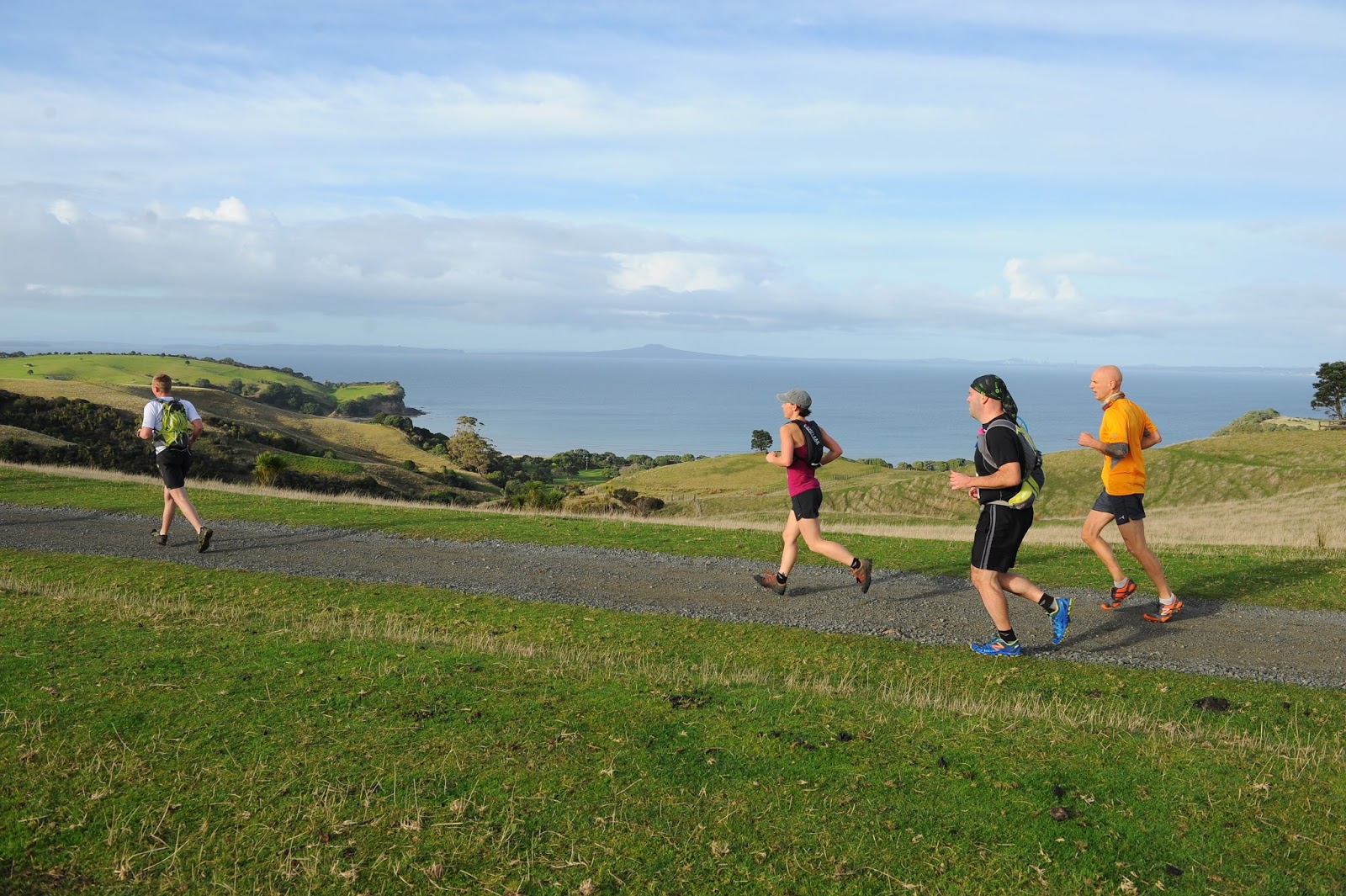 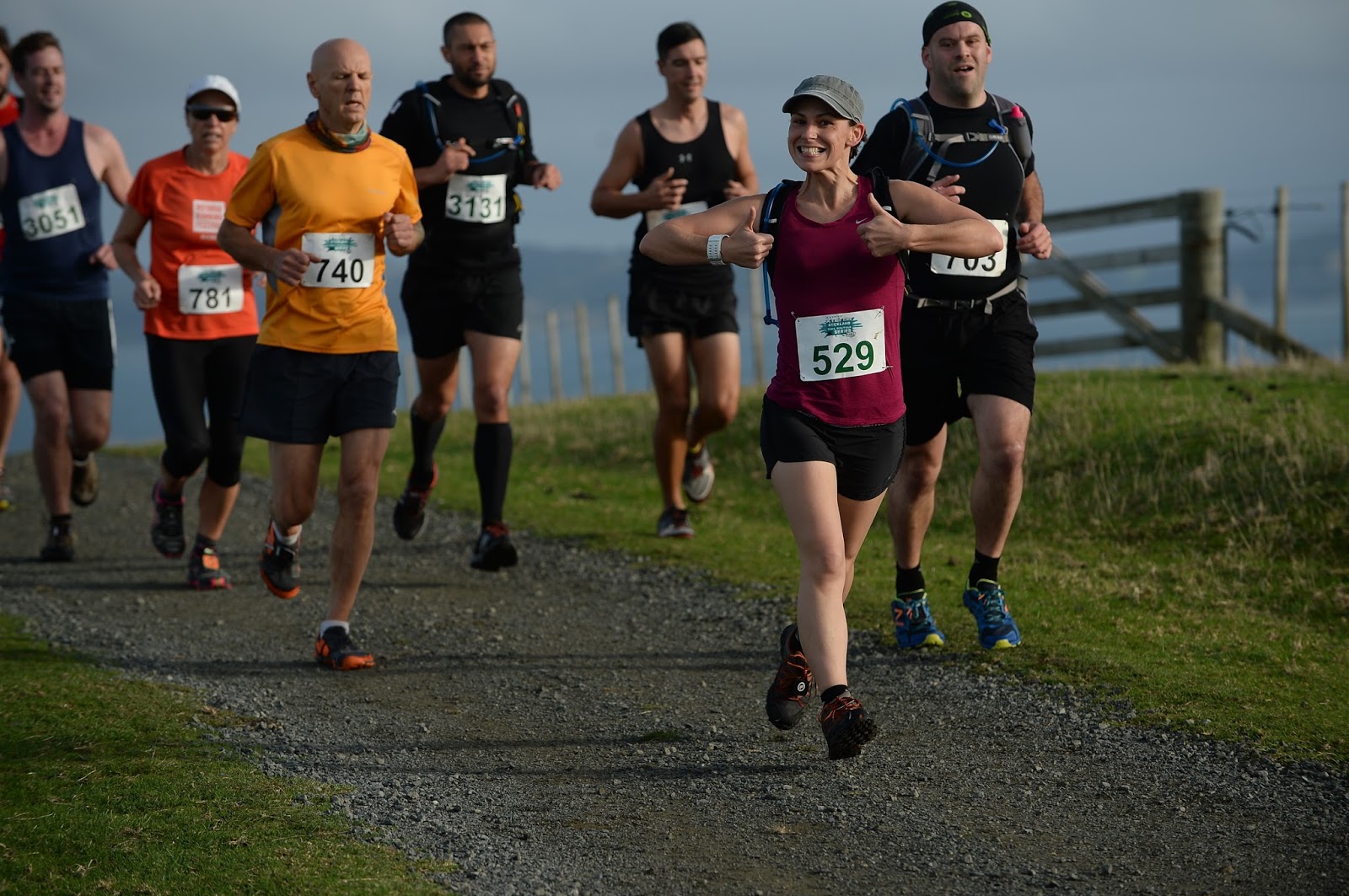 XTERRA Series - for the cheesiest race photos ever!  It's all about experimenting, to see what works best ;)

At the top of one of the hills I saw signs with arrows pointing in opposite directions - 1st lap and 2nd lap.  Another lap with these hills?  Ugh!  I quite enjoyed the downhill trail section, although it was rather brief.  We soon arrived at the coastal section of the run.  It was remarkably long, I think about 8km all up.  The rock formations changed considerably along the length of coastline - there was a lot of rough stuff which sometimes ran parallel, other times perpendicular, to the water's edge, and then all the times in between where it had no rhyme or reason - just crazy, uneven rock.  Smooth, jagged, seaweed-covered...  It took a lot of concentration, and I quickly remembered how challenging the aptly-named Coastal Challenge had been!  Granted, it was a different section of the coast, but much of the rock type was similar.  It was fun, but hard work.  There were two sections where we had to get wet - the first was relatively minor, and the water came up to just past my knees.  The second dunking was a lot more fun, and came up to my waist.  The water was really cold, but sooooo refreshing!  I actually really enjoyed it :)  I spotted quite a few purple jellyfish washed up on the beach, and one really huge clear/yellow/pink one that looked like a giant, bloody snot blob.  Mmmm...  The only rain we had during the race hit during the coastal section, so I wasn't bothered by it at all.  It wasn't overly heavy, and I was already wet anyway.  Rain, shmain ;)

Eventually, we hit the soft sandy part of the beach, where we (the 'longies') had to split off from the 'super-longies'. 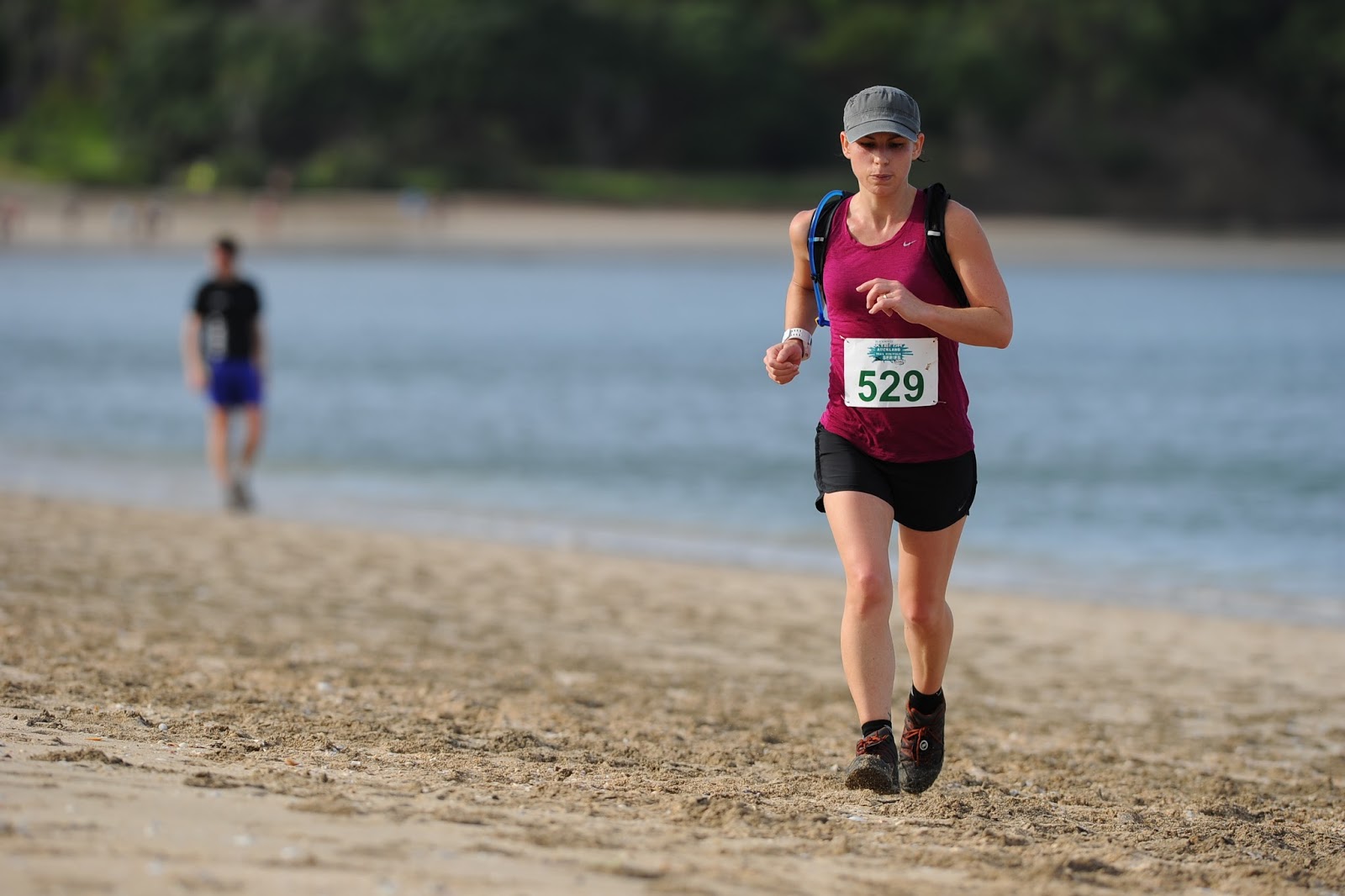 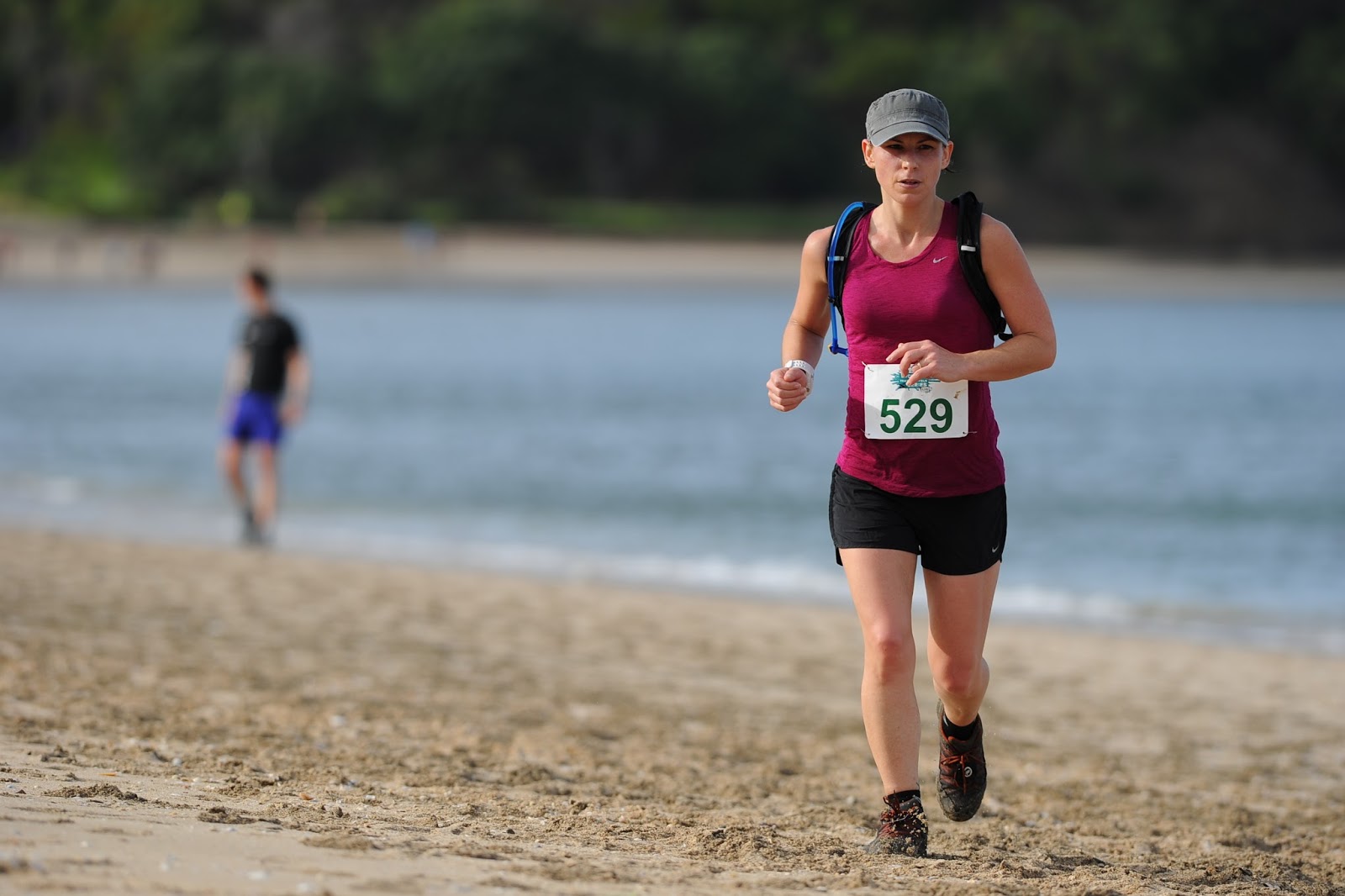 "Wait, how much more sand is there on this beach?" 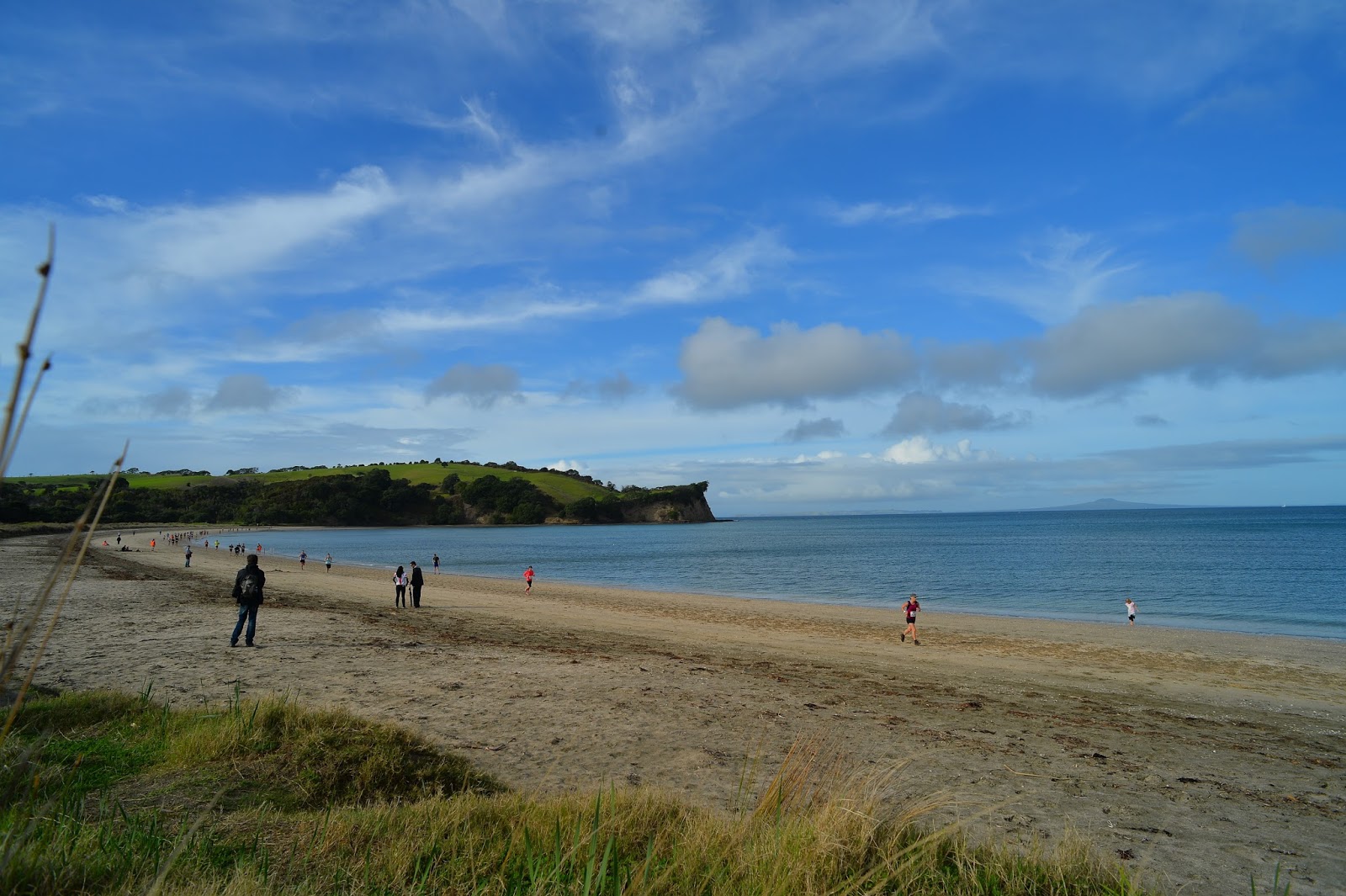 I said goodbye to Martin and headed on up towards the hard-packed, much smoother earth that my legs were craving after the jagged, uneven rocks and soft, giving sand.  The relief was short-lived though, as we were quickly climbing the steep grassy hills again.  There were more of them this time, but those downhills... oh, such fun!!!  I did become a little concerned that I'd made a wrong turn at some point though, as I was surrounded by mid-distance runners and couldn't spot any of the longies I'd seen earlier in the race.  Deciding there wasn't much I could do except follow the course, I kept going, enjoying the views as I went.  I could only assume I had gone the right way, with nothing to tell me otherwise.  After a bunch of hills and a little more trail, there was another sandy beach section before heading to the finish line.  I walked a few steps, and a guy gave me a smile and said "go on, not far to go now!", so I started running again, did a bit of a sprint finish with a girl who was running the mid-distance (so it totally didn't count but whatevs, I felt pretty badass anyway, lol), and completed the 15.8km run in 1:45:19 - 19th out of 50 in my age category (105th out of 184 overall), so a slight improvement on the last race.

When comparing my GPS tracking with the race map, it matches, so I must've got it right :) 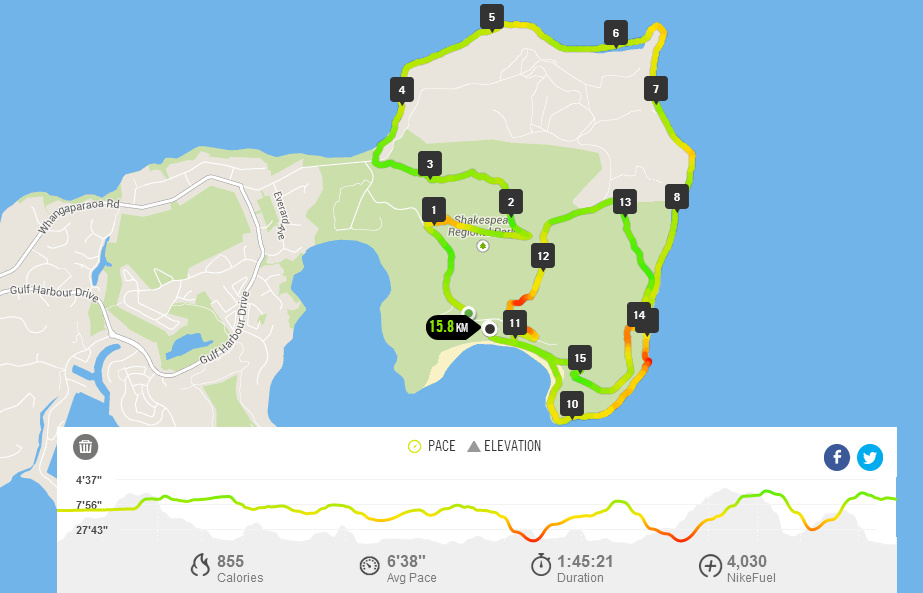 This time we all had other engagements so didn't hang around long post-race (sorry I missed you Sheryl!).  I did grab a couple of slices of bread to munch on, having left the gels in my pocket, and bought a large soy flat white (drinking a lot more coffee these days).  I did a classic towel-around-the-waist car park change into dry jeans and a top for the drive home, we caught up with a few friends in the mid-distance, saw Martin come in after his super-long, then headed on home.

The next XTERRA race is out in Woodhill on the 29th June, and is listed as a 20km.  Before that though, Martin and I have the 25km Double Rainbow tomorrow morning.  I'm looking forward to the run, but not the getting-up-at-stupid-o'clock-to-get-there part...  Ah, the things we do...

As for the 50 Days of Winter Running challenge, the first week started off with a hiss and a roar - I clocked a 50km week!  Sadly, due to Deane being in Sydney Tuesday through Friday, and having to finish off the giant assignment of doom, I didn't manage any run time during this week :(

I scored myself a fitbit though, and today was my first full day of wearing it.  Who knew you could walk 10,000 steps by just wandering around your house over the course of a day?!?  Okay, fine, I did walk to the supermarket and back, but that's only 600 metres from my house...  I'm looking forward to seeing what kind of mileage I get in an average week!

Right, time for a hot drink and an early night, to get ready for the 4am wake-up and 3+ hour drive to Rotovegas tomorrow morning.  I'll let you know how we get on next week.  Until then, enjoy your weekend!
Posted by kreachr at 19:53