Boy, were we lucky with the weather for Woodhill!  It had been raining off and on all week, with some pretty impressive thunderstorms thrown in for good measure, but Sunday morning was completely rain-free.  Today it's been pouring pretty much non-stop, so thank you weather, for allowing us to have a drizzle-free event ;)

One thing this year and its many events has given me, is the ability, finally (it took a while!), to not stress about races any more.  The day before is just like any other day, maybe a little more relaxed and without a long run.  Definitely no alcohol consumption (I've learned that lesson), but I'm cool to just roll with whatever happens.  People over for dinner?  Fine.  Late night?  No problem!  Lack of sleep?  Not the end of the world.  The morning of, I'll just pootle about getting my stuff organised.  Breakfast is a non-event because, again, I've learned that worrying about it gets me nowhere.  If I'm hungry, I'll eat a banana or some toast.  For Woodhill, I ate a power cookie (recipe below) and took a cup of tea for the car ride.  Martin picked me up at 7am and we trekked on out to Muriwai, parked, and took the shuttle bus to the event HQ.  Because of the distance from car to HQ, and time we would be waiting around before and after, we both took our gear bags with extra clothes to drop before the race.  We visited the portaloos, grabbed our race numbers and transponders, and fluffed about chatting to people while we waited.  Although we'd arrived quite early, our leisurely meander took up most of the wait time, so race briefing wasn't too long after we'd organised ourselves.

At 9am, we headed off on a wide gravel forestry road.  I was determined this time to start out slow, since the last few races I've gone out too fast and worn myself out too early.  I was getting passed by what felt like the entire field of long and super-long runners, but once we were a few kilometres in, I overheard a couple of guys chatting and one mentioned that we were still in the 'lead group'.  I was surprised, but felt a little better anyway.  I lost Martin quite early on (I started out reaaaaaaaally slow!) and ran a couple of kilometres by myself.  We caught up again when he stopped to stretch his achilles.  The trail, once we got to it, was quite soft and spongy underfoot because of the thick layer of pine needles, and thankfully it wasn't too muddy.  I was expecting a quagmire after all the rain we'd had!  The scenery wasn't particularly exciting, but the silence was lovely. 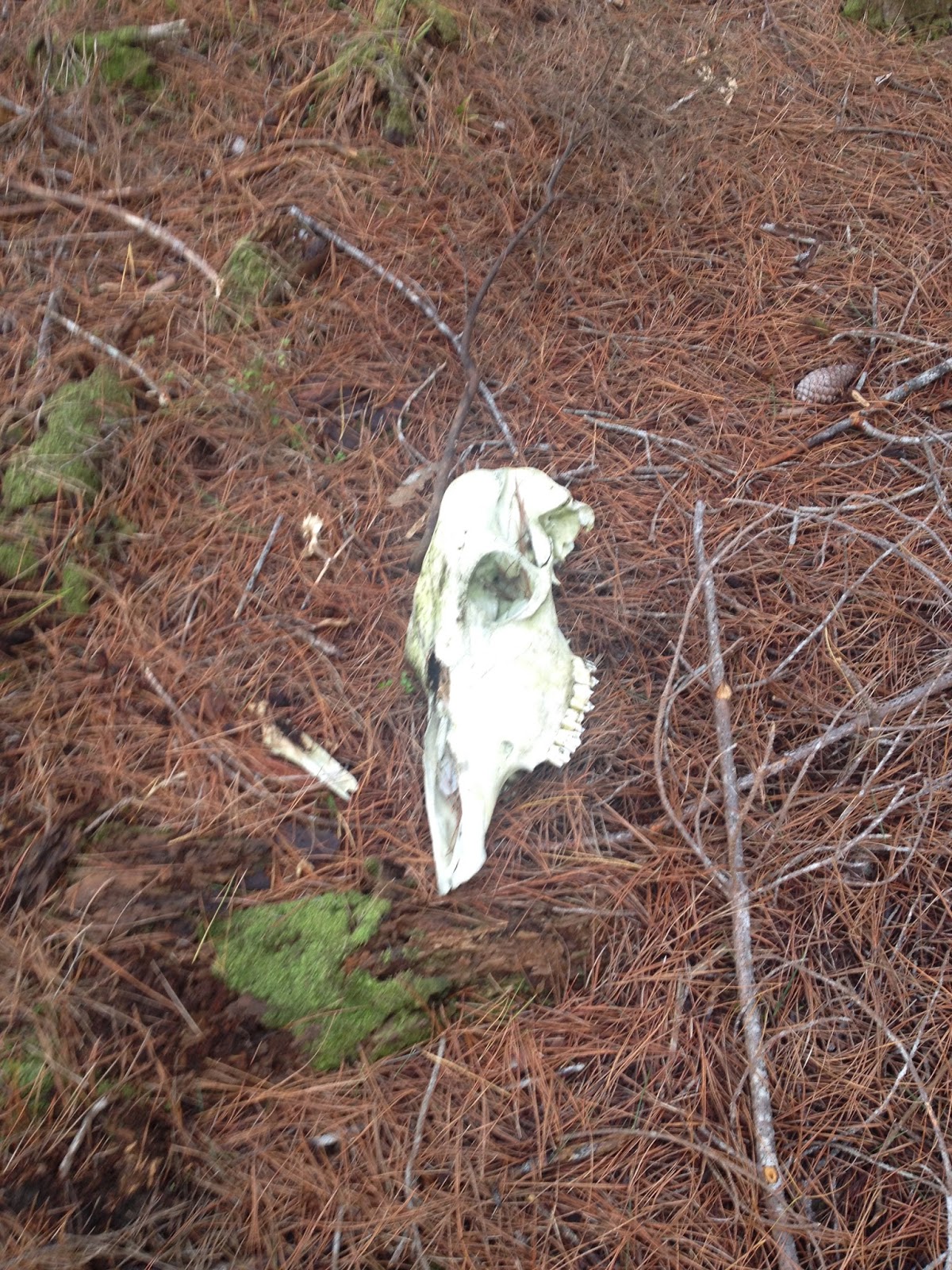 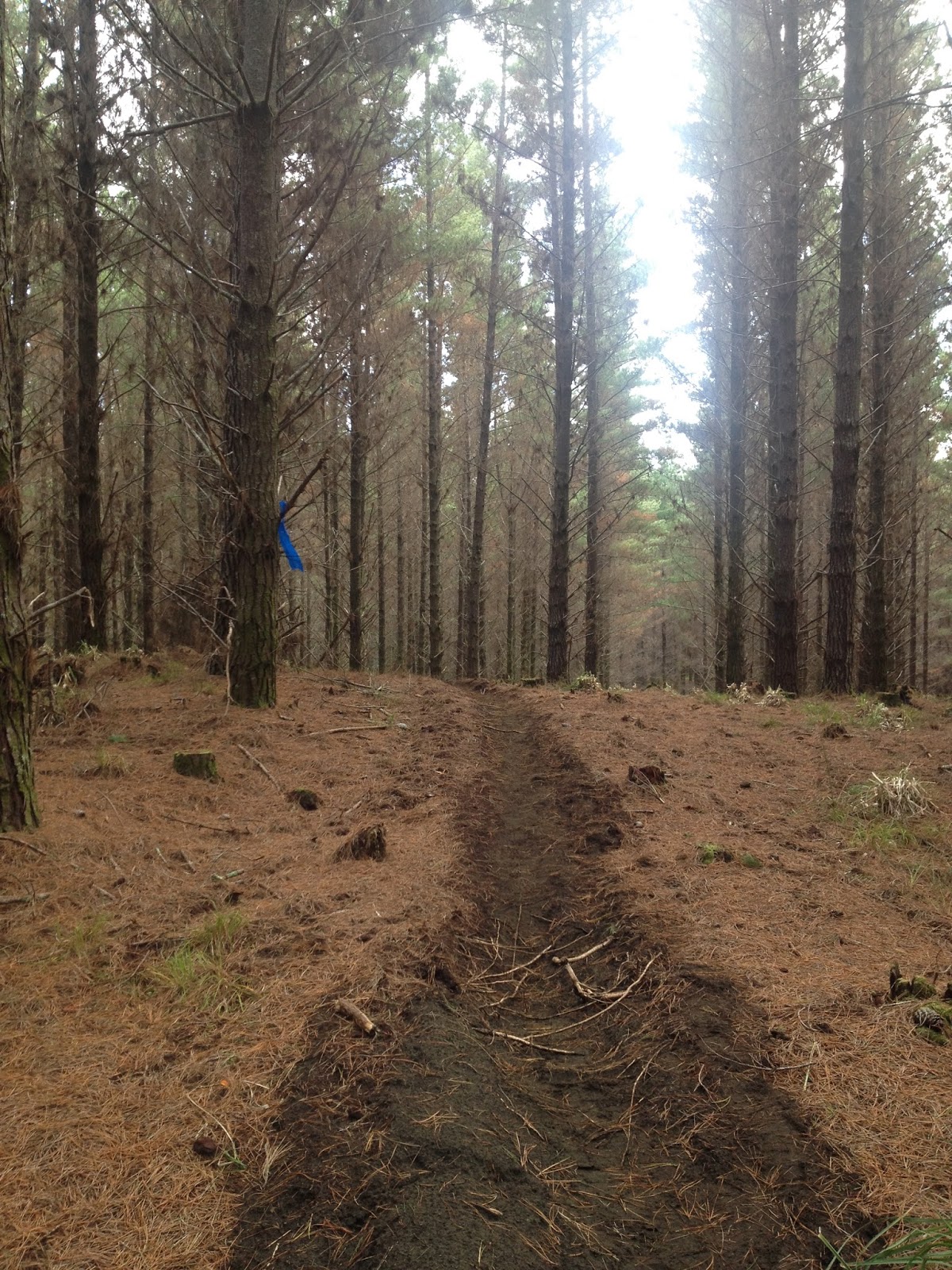 Whilst the ground underfoot was relatively easy to run on it was constantly undulating, much like a BMX track.  I found it rather irritating after a short while, and it was quite draining on the legs.  Still, Woodhill was a relatively flat course overall, so I guess you've gotta have something to make it a little more challenging ;)  I had gone in to the race thinking my hill strength was pretty good since I'd been working on it a bit lately, but discovered after a while that whilst my road hill running is definitely improving, my trail hill running is still pretty crap.  The unevenness of the trails prevent regular, smaller steps which I find I can manage continuously - instead, there were small steps, large steps, and soft, shifting, sandy dirt which altered your stride with every foot fall.  There's no chance to get into a rhythm on the uphills.  Having said that, I was getting passed by a lot of people on the uphills, so it's probably just me ;)  The longs and super-longs split relatively early, at about 4km in.  I said goodbye to Martin and carried on my merry way.

There were quite a few tree roots and things to snag your feet on, but thankfully I avoided a full face-plant.  Several runners were less fortunate, but had the benefit of soft, springy ground to hit instead of unforgiving rocks or hard-packed dirt.  Still, I have now begun to think of it as tr(ip-and-fl)ail running ;)

I took a few walking breaks, particularly on the uphills, and had a gel at about 8km in, knowing it was going to be a longish race - estimated at 19km.  Since trail runs usually take longer than road runs, I figured I'd be out for over two hours and decided a gel was warranted, particularly after only a cookie for breakfast (even though said cookie is nearly 300 calories!).  The mid-section of the run was pretty uneventful although there were some pretty cool downhill sections - soft dirt means you can really fly down and not worry too much about falling and hurting yourself!  We joined the super-long, mid-distance and short-distance runners at various points along the way.  There was some nice scenery whilst running alongside the stream with a wood bridge to cross, and some open grass areas.  The sun was out at that stage, so it got a little hotter than I was expecting and I considered taking my sleeves off, but couldn't be bothered undoing my watch so decided to just leave them on.  The finish wasn't too far away.  The last section was a bit more of a slog than I was expecting - a gentle uphill on sandy dirt and grass.  Sounds like it wouldn't be too much of a challenge, but I took several walking breaks anyway because my legs were pretty drained.  Soft ground sucks the energy out of you!  I still managed a smile for the camera, and crossed the finish line in the middle of the pack, at 2:08:09, 13th out of 24 in my age group, and 68th out of 110 overall for the long distance. 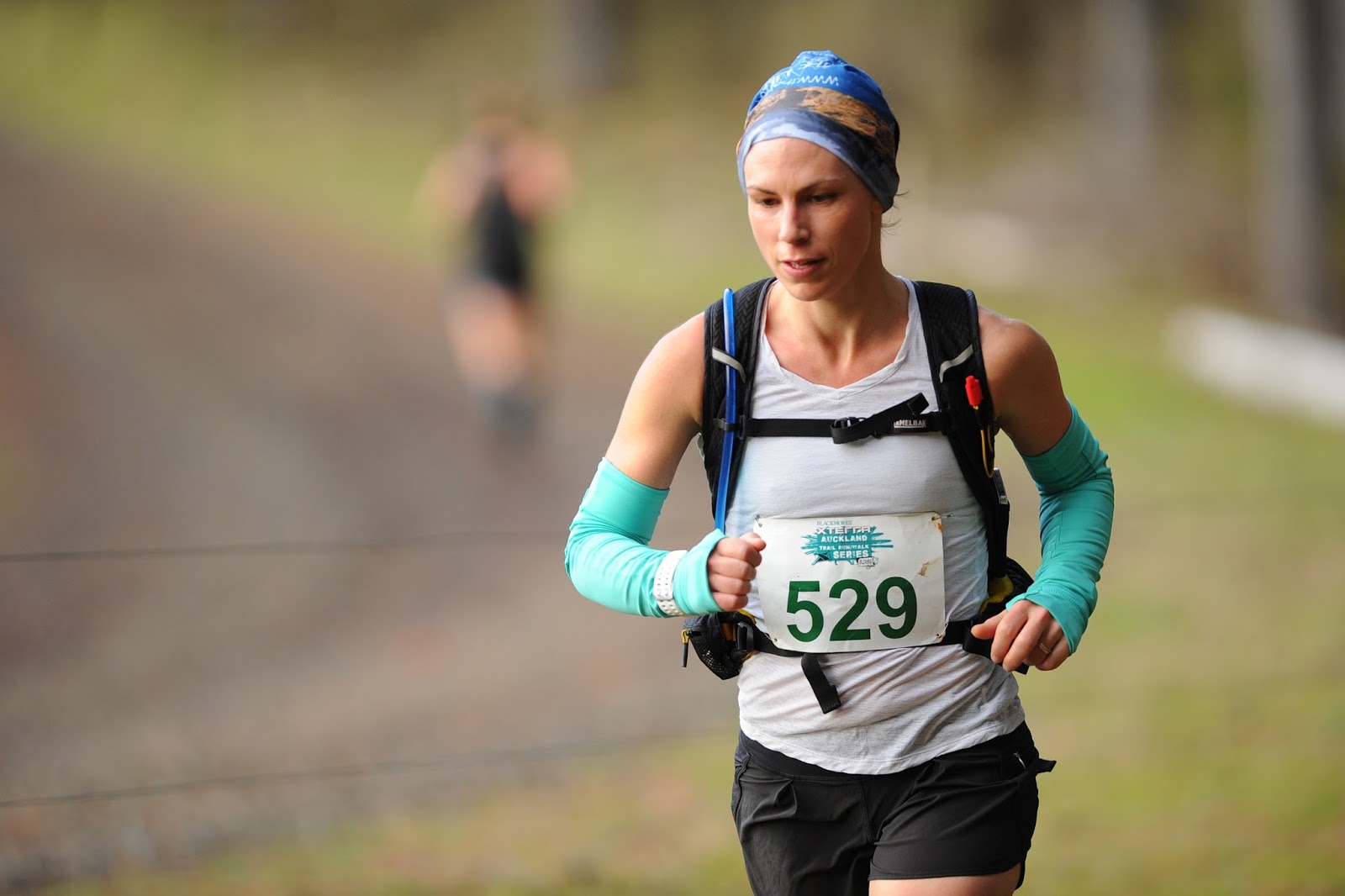 Concentrating on my footing 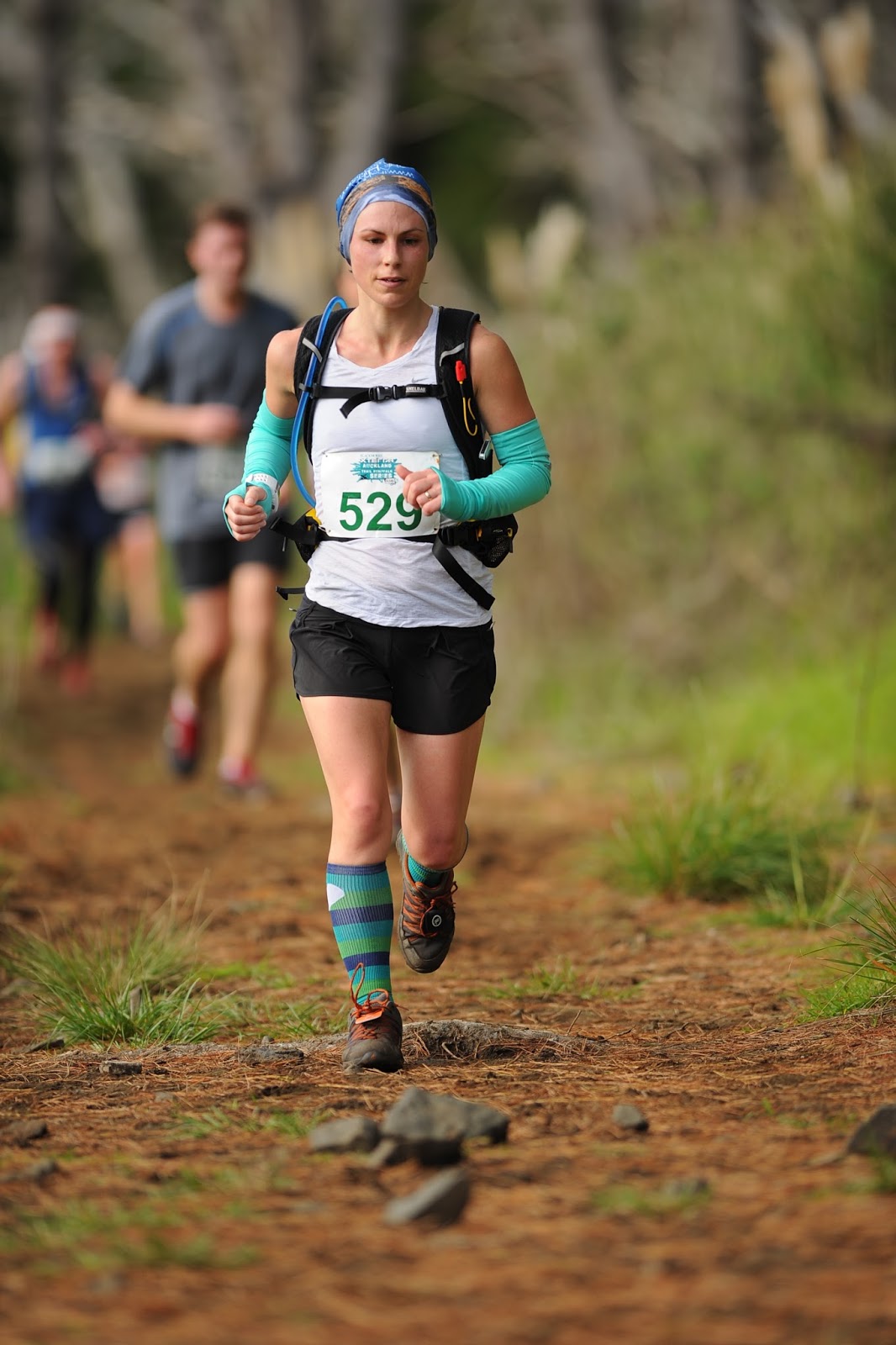 Those photographers snap pics of you before you even realise they're there!  Allan Ure and his team at Photos4Sale do a fantastic job :) 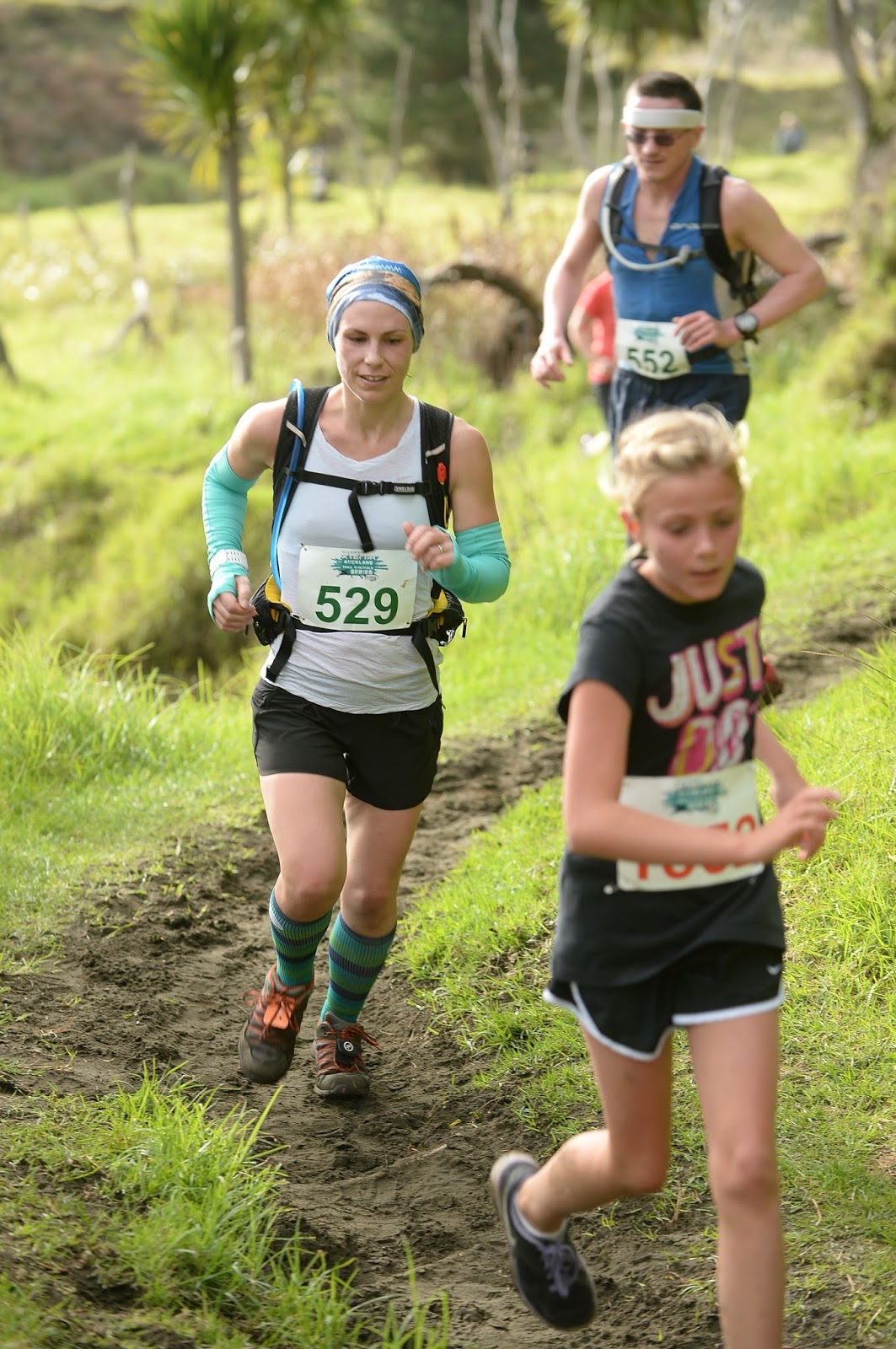 Yep, my running outfits are getting weirder...

For 19km (and the fact that my 'starting out slow' tactic ended up continuing for the entire race, lol) it was a little quicker than I expected.  Taking into account the lack of serious hills, I guess it makes sense.  The next XTERRA run is in Dome Valley, and is listed at 19.5km.  I imagine my time for that will be quite different, because the hills are much more... hilly.  Sadly, the elevation profile isn't available so I can't get a good idea of what we're in for.  Oh well, I guess we'll find out in a few weeks!

After the run, I managed to find Sheryl and catch up briefly (it was good to see you Sheryl!) before heading off to get changed and go have lunch with the group.  All in all, a pretty good day :)  Discussion (for myself and Martin at least) has moved to training for XTERRA Waihi, which is a little over three months away now.  Time to start increasing distance and really working on the uphill trail endurance!  This is one race I am freaking out about!

As for the 50 Days of Winter Running challenge, things are going pretty well.  That was a 55km week from Monday to Sunday, which I'm quite happy about.  On the days I don't run, I walk a lot so although my cross-training ambitions have fallen by the wayside (again) I'm still getting something achieved.  My fitbit is really helping me keep track of activity levels, and motivating me to get off my butt a little more.  Hopefully I'll be able to keep it up (injury-free) heading in to the later months of this year, with the training increase for Waihi.  Now, as promised, the power cookie recipe.  These things taste amazing, and are a great energy source for long runs.  I got the recipe from a runner friend, who found it on the internet.  I'm sorry I can't link to the original source :(  I might go for a hunt at some point to see if I can find it.  In the mean time, here you go:

Heat oven to 160°C.  In food processor, pulse nuts, agave, peanut butter, dates, flaxseed and oil.  Add fruit and coconut and pulse until just combined.  Tip into a bowl and mix well with a spoon, then using a 1/4 cup measure, form 2cm thick rounds and place on a lined baking tray, leaving about 1" between each cookie.  Bake for 15-20 minutes until browned around the edges.  Cool completely on the baking sheet before storing in a container or wrapping.  Makes 11.  As an added bonus, they're gluten free and vegan too :)  Great for sharing.  Enjoy!
Posted by kreachr at 16:13