Y'all thought I'd given up on knitting entirely, didn't you?  For a while there, I almost thought I might just let it roll on by.  Like that fixation had run its course.  Well, it hasn't, I just don't have as much time to put into it as I had previously.  I'm spending about 1% of the time I used to spend on Ravelry now - I just check in every few days to see if there are any posts in the Auckland group thread about Sunday knitting.  I don't even keep my projects up to date any more...  But there are finished projects!  Unfortunately, three of the cutest projects I forgot to get photos of before sending them to the mum-to-be.  Hopeless.  I will at least link to the patterns though, so you can see what they looked like.  I used some of my stash yarn - the olive-green Cascade 220 I bought in Canada.  You know the yarn, I made an afghan out of it, and my cardigan: 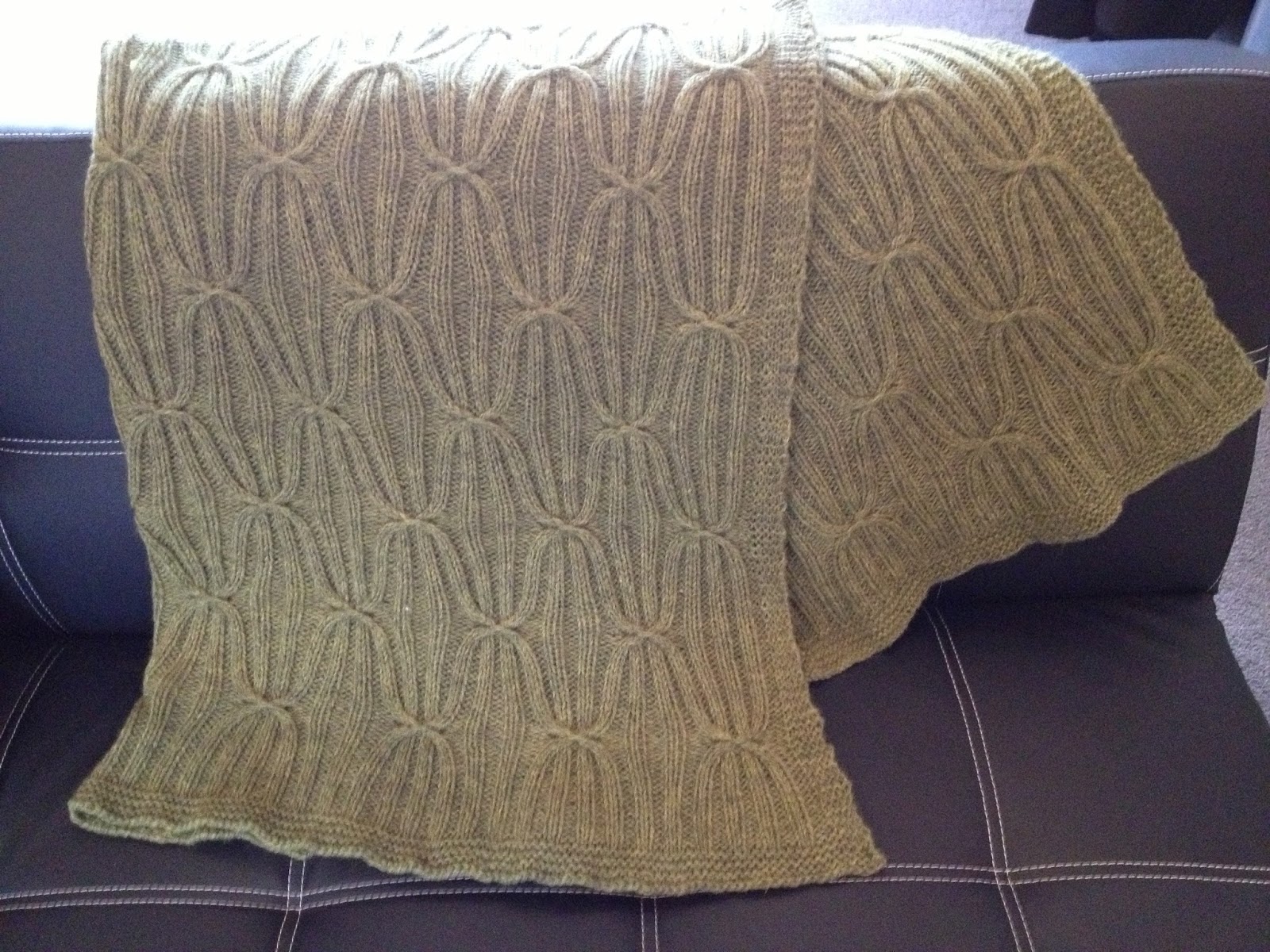 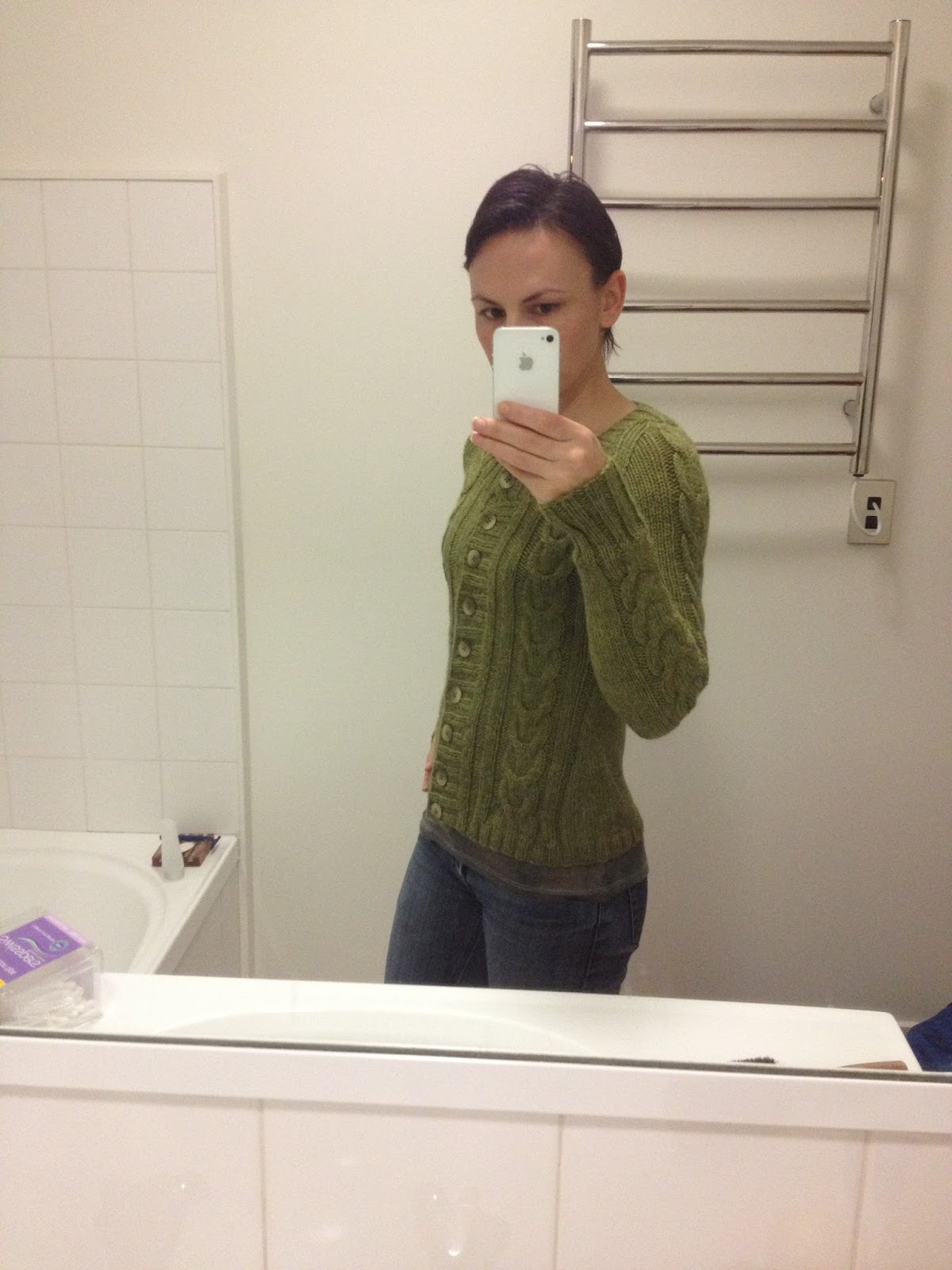 I used a skein and a bit to make a Milo vest, a wee Barley hat, and some ridiculously cute baby boots.  Love them!  So did the mum :)  I may see if I can snap a pic of them on the baby when he's born (he's due in August).

Another project I do have pictures of is an afghan I knit for our friends that got married in May: 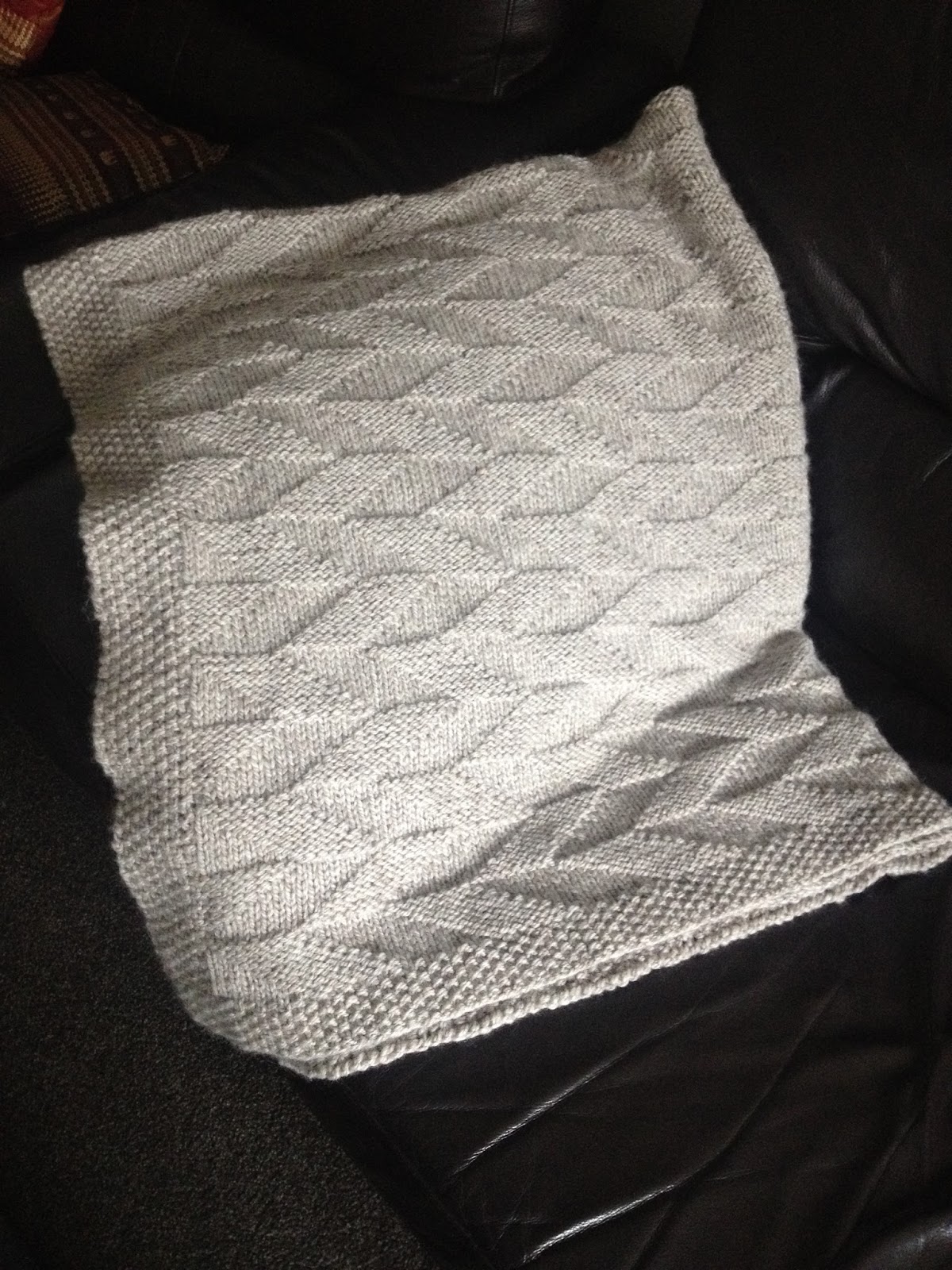 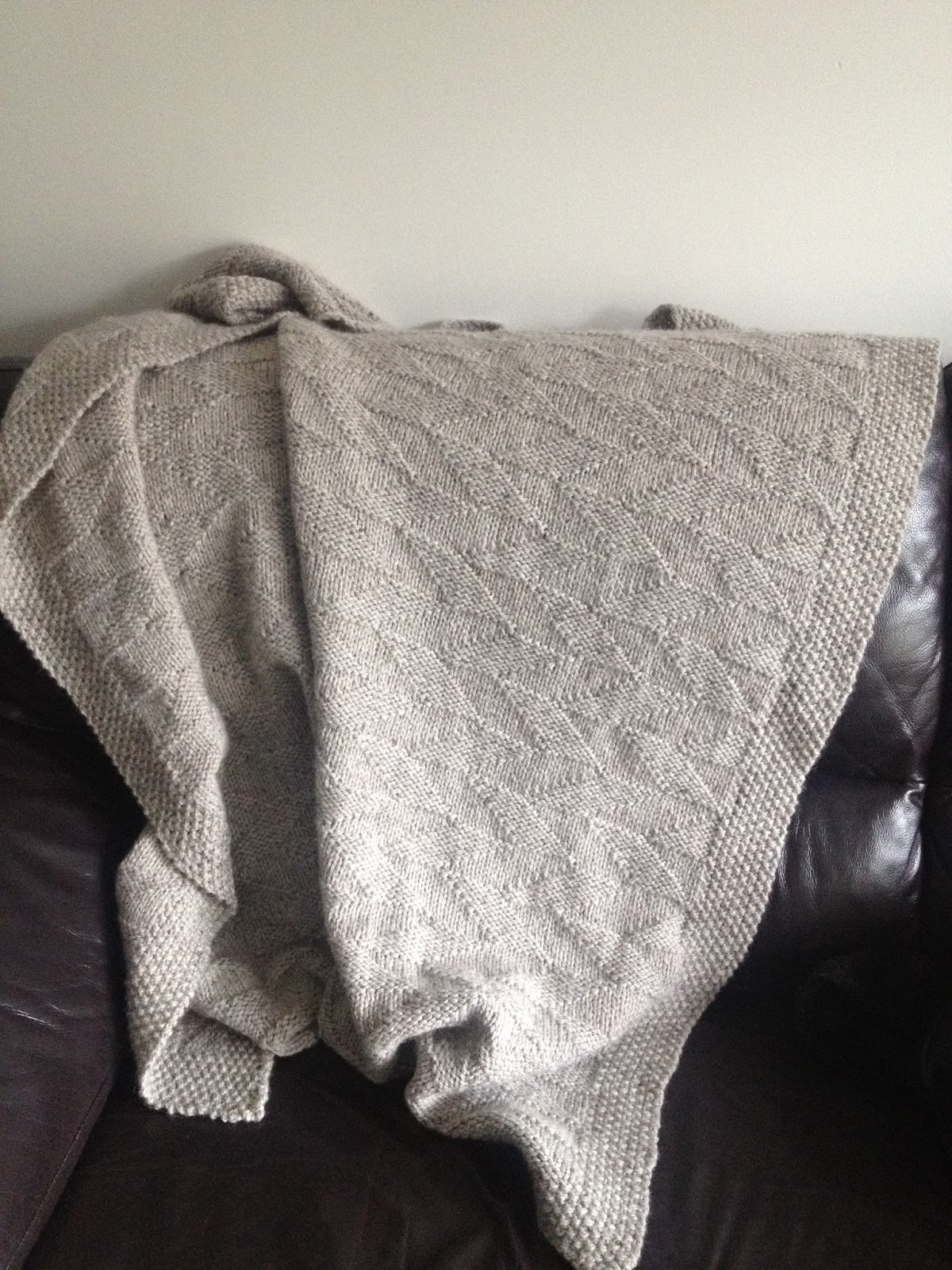 Graphic Afghan, knit in Countrywide Natural 12 ply yarn.  I modified the pattern slightly by knitting eight rows of seed stitch to start, and eight stitches of seed stitch on the sides (increasing the row stitch count by eight), and I knit 15 full pattern repeats to make the afghan a little larger.  I was initially disappointed with the size even after the various increases, but after blocking it stretched out a bit, and our friends love it.  They comment often on how warm it is, and perfect for keeping their feet warm at the end of their bed at night.  My friend and I are watching one Harry Potter movie a week over winter, and this afghan gets brought out each time.  That makes me pretty happy :)  It's always good to know when your hand knits are appreciated and used.

Last of the finished projects is something that's been in the works for nine months.  Yep, you read that right.  Nine.  Months.  Crazy.  But I persevered and worked on it little by little, and finished it (finally) a week and a half ago.  I haven't 'modelled' it for photos because it's just too darn cold at the moment, but here's a crappy 'finished' pic: 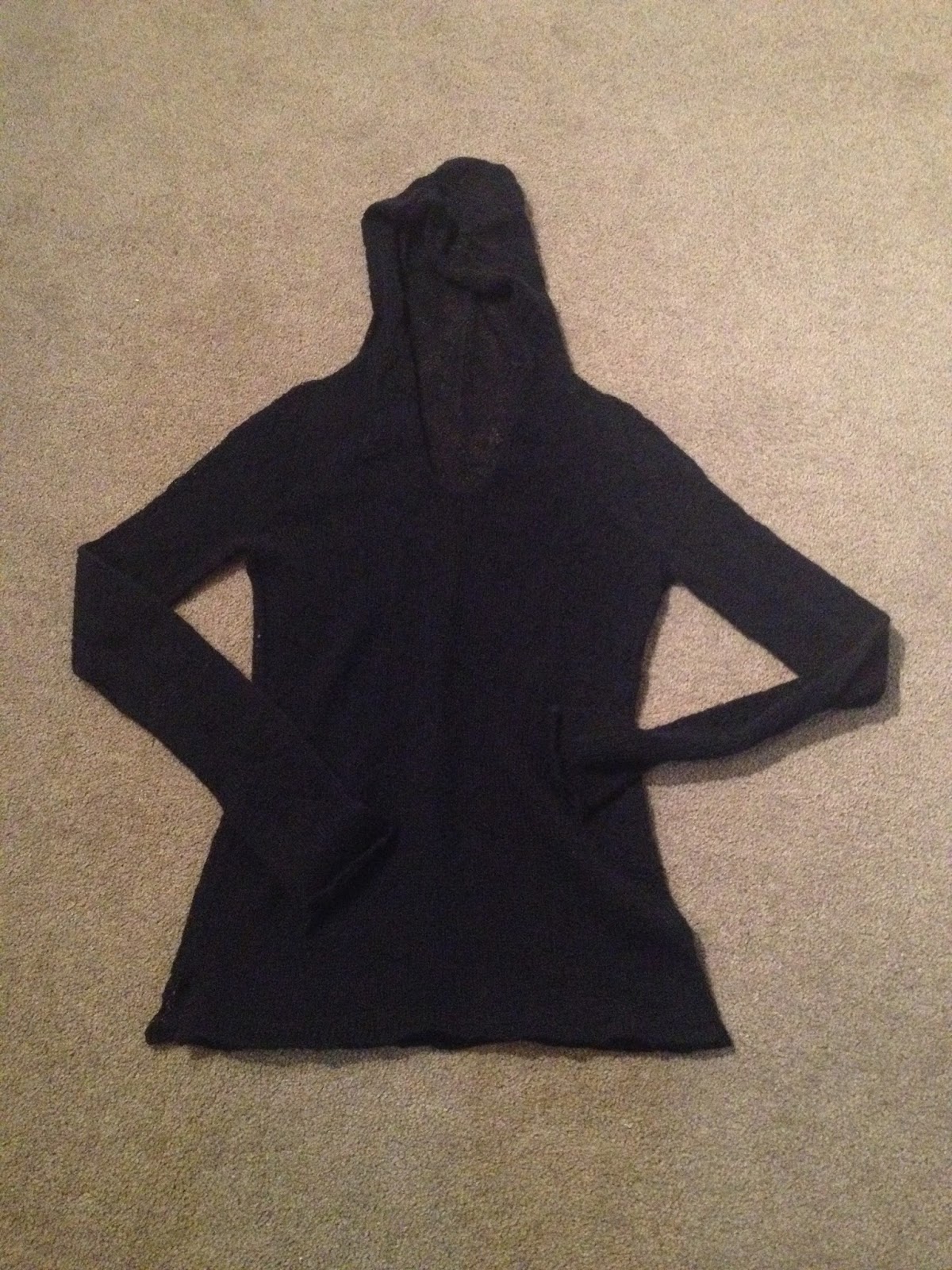 A stockinette, long-sleeved, lace weight hoodie.  This was knit in 100% merino lace weight yarn I bought from Skeinz a while back (obviously, since this project is nine months old...).  The original pattern, Versio, is not a hooded sweater, but a large number of people who knit it convert it to one.  I used some modifications that were posted by another Raveler and am fairly happy with the result.  I'm looking forward to wearing this in summer - the plan is for it to be used as an over-bikini beach garment/warm summer evening garment.  But please, if I ever mention that I'm thinking of knitting a long-sleeved lace weight anything ever again, remind me that its a bad idea!!  It wasn't a difficult project by any means, but deathly boring!  Particularly because of the colour choice, the fact that I didn't want stripes, and omitted the fake side seams on the body and sleeves.  It was just plain ol' knit stitch, over and over and over and over...  It's done now.  I just have to wait for the warmer weather ;)

What I'm working on now is going to be a bits-and-pieces project - I'm using all my sport/dk/worsted weight leftovers to make a crochet granny square blanket.  I love granny square blankets, and aside from the one T has from his babyhood, we don't have one in the house.  Shock horror!  This must be remedied!  Behold, the in-progress fugly blanket!  (Y'all know what fugly means, right?): 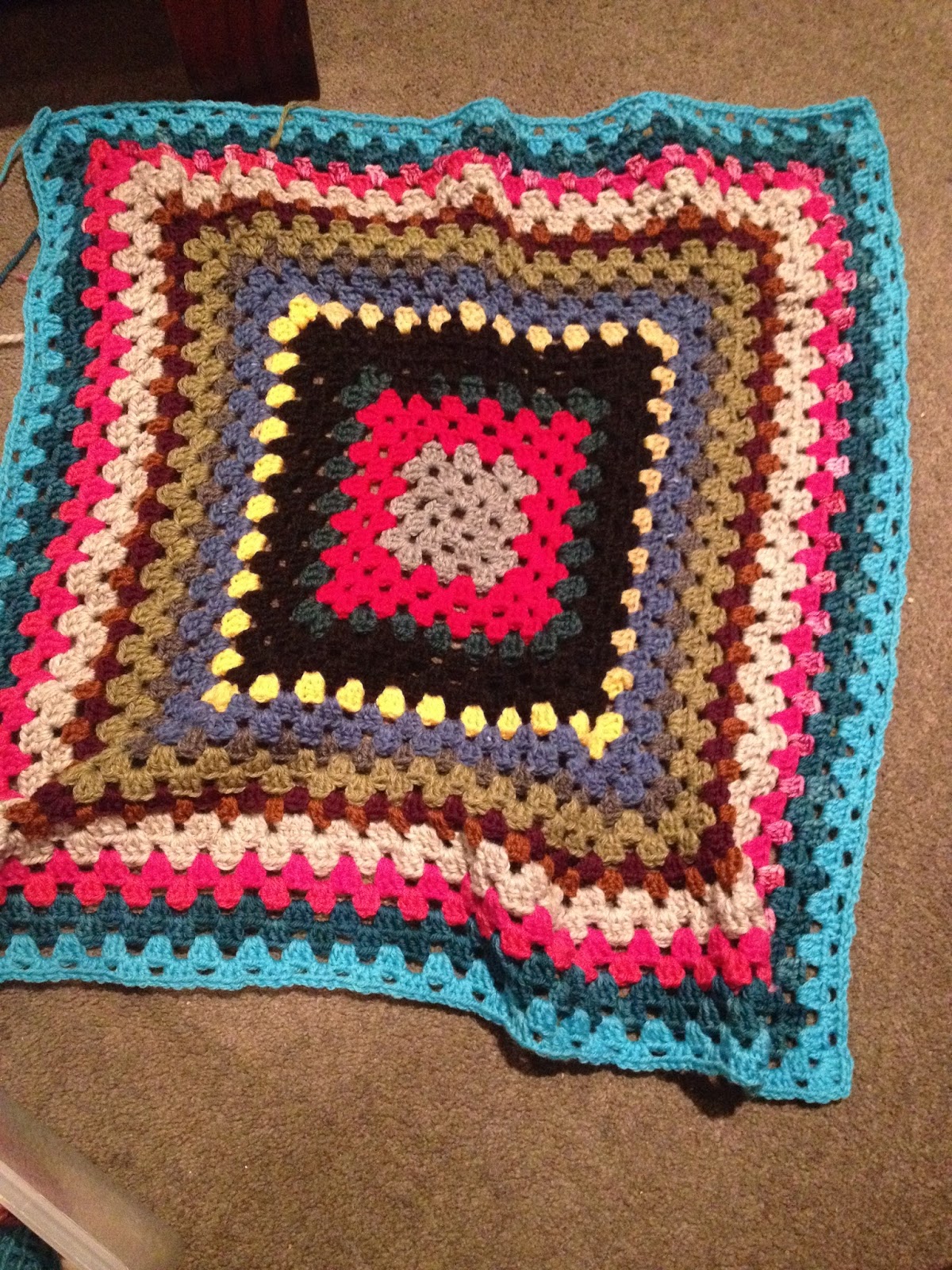 It's a little hard to tell from this pic (which I took in poor night-time lighting) but the colour combinations are something to cringe over.  So far, from the middle outwards, we have: grey, red, forest green, black, bright yellow (and some beige when I ran out of yellow), blue, dark grey, olive green, burgundy, brown, light grey, bright pink (in three shades), peacock, mid-blue... and I've been working on the latest colour since this photo was taken - bright, golden yellow.  Mmmmm, fugly indeed...  I love it!!

Next on the 'to-do' list is a Where's Wally hat for my nephew - he specifically requested it for his birthday.  Kids.  They're weird!  Gotta love 'em ;)
Posted by kreachr at 21:30