I had my alarm set for 6am on Sunday morning - the XTERRA website would be updating at that time to let us know whether or not the event was going ahead, due to severe weather warnings north of Auckland.  I woke up well before then and lay in bed checking social media to fill in the time.  At 6.10am, the website was updated, letting everyone know it was indeed going ahead.  I'll admit to being slightly disappointed - we were in for a muddy one, and it was cold and wet to boot.  I don't think I would've minded if the event was cancelled and I had the option of just staying in bed.  But I got up and flumphed downstairs in order to get ready.  I packed extra gear just in case - waterproof jacket, cap, thir, shorts (in case I changed my mind about wearing capri tights), rubbish bags for in the car (because mud just gets everywhere)...  I'd decided to go with the smaller hydration pack because it was a shorter distance run, and because it was cold I wasn't expecting to need much water.  I would've gone without it entirely, but there was going to be quite a gap between the two aid stations and there's nothing worse than running thirsty.  I had a power cookie for breakfast, made a cup of tea for the road, and went outside to wait for Martin to arrive.  Parking was going to be tight, so we were carpooling because we're good like that ;)  I picked up Lindsay and we headed out to Warkworth, debating about the weather and how crazy we were to still be running in it.

We arrived early enough to get a park pretty close to event base (hooray!) so there was minimal schlepping back and forth, and the car was close by to sit in - dude, it was coooooold!  And poor Lindsay wasn't starting her run until 10am so had quite a bit of time to wait around.  There was nowhere to sit outside because the entire area was a mud pool except for the occasional patch of grass, which was wet because of the rain.  I picked up my bib and transponder, and noticed quite a few people were dropping down from the super-long to the long distance.  The organisers had already had to reduce the distances earlier in the week - the super-long had dropped from 25km to 21km, and the long had dropped to 15.5km from (I think) about 19km, but the terrain was going to be tough, which would make up for the shortened course.  I don't think anybody was complaining!  Before race briefing it started to rain, so after some convincing from Martin (I believe his comment was "tell me where the car keys are so I can drive us home because you'll be suffering from hypothermia") I donned my waterproof jacket over my merino sleeves and singlet top.  This required me to shift my race bib to the top of my tights.  It was still obscured by my jacket, so I tucked that into my tights a little bit to uncover it - don't want to miss out on those race photos ;)  I have no idea how people can run whole races with their number there, it's bloody annoying!

At race briefing we were informed that due to the high level of the river after all the rain, it was too dangerous to have the river crossing in the event, so the long and super-long courses had been shortened again - they would now be 14km and 16km respectively.  A lot of discussion broke out after that announcement, and I don't think anyone was really listening to the rest of the briefing - poor guy, he still went through it anyway.  I'm pretty sure everyone was happy about not having to jump into freezing, fast-moving water!  At 9am we headed off on our run, which started with an uphill slog on a gravel road.  Just as we began, the sun decided to make its appearance.  About two minutes into the run, I was cursing Martin for convincing me to wear my jacket!  I stripped it off pretty quickly and tied it around my waist, but it wouldn't stay done up.  It was so annoying!!  I briefly considered just dumping it on the side of the road, but came to my senses and realised I'd be pissed at losing a $120 jacket just because it was irritating me.  I ended up having to tie it around the top of my pack straps because there was nowhere else to put it.  I had to slow to a walk to achieve this, but at the time I didn't mind too much because the uphill was relentless and I needed a bit of a break.  I also took this time to shift my race number back to my shirt.

There was a bit of downhill as well which was quite fun, but then there was more uphill.  Another opportunity to take a short walk break and strip off the sleeves too, which I managed to stuff into the tiny pocket of my small pack.  On reflection, my trail pack would probably have been a better choice for this event simply because there are more storage pockets - it would have prevented the jacket issue entirely.  Oh well, you live and learn...

After about 5km of undulating gravel road, we veered off into the forest.  They had warned us it would be muddy, but I have never seen so much mud all in one place, including Tough Mudder!  Holy crap, there was a lot of mud!  We're talking giant slip-n-slide hills, both up and down hill.  There were ropes for a couple of the uphills which were really handy, because I'm pretty sure most people wouldn't have made it up without them.  I love being able to fly downhill at top speed, but I am not a fan of losing control while doing it, so I went carefully on the slippery downhills, planning my footing as best I could to avoid sliding out.  I got passed by quite a few people who clearly had less concern for their safety and general well-being.  I have no idea how they made it down without disappearing off the side of the hill or severely injuring a limb in the process...  It didn't matter what shoes you had - unless they had 1" spikes protruding from the soles, there was no avoiding the slippery slides.

This pic, although only showing a short section of the epic muddy uphill slog towards the end of the run, gives you an idea of what it was like (shamelessly stolen off Facebook - was posted by Nic Daulton in the Total Sport Dome Valley thread): 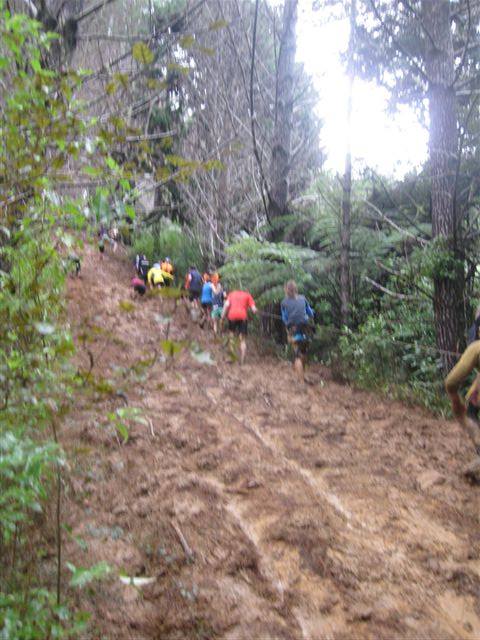 Most people used the rope over to the right hand side, a few hardy souls slogged up over on the left without the aid of a rope (apparently there was a lot more vegetation over there which helped prevent sliding downhill), and the poor dear in the pink top you can see in the mud on all fours had just been flung off the rope sideways after somebody slipped.  A select few attempted to go it alone through the middle, and had to be rescued.  I heard a few less-than-savoury comments coming from some participants, but most of the banter was pretty jovial - its not every day you get out in the elements and slog up a ridiculously steep, muddy incline for the fun of it, you might as well enjoy it ;)

After the mud-fest, there was a little more forestry to run through, then we hit the gravel road again.  I was expecting there to be a lot more downhill than there actually was - my memory tricked me into thinking I'd run a lot more uphill at the start I guess.  It felt like a bit of a slog and I walked a bit on and off.  I caned it on the downhills and thought I was going pretty fast, but I was still getting passed - admittedly those passing me were all men with long legs...  Afterwards there was another short downhill blat through muddy forest track before heading to the finish line. 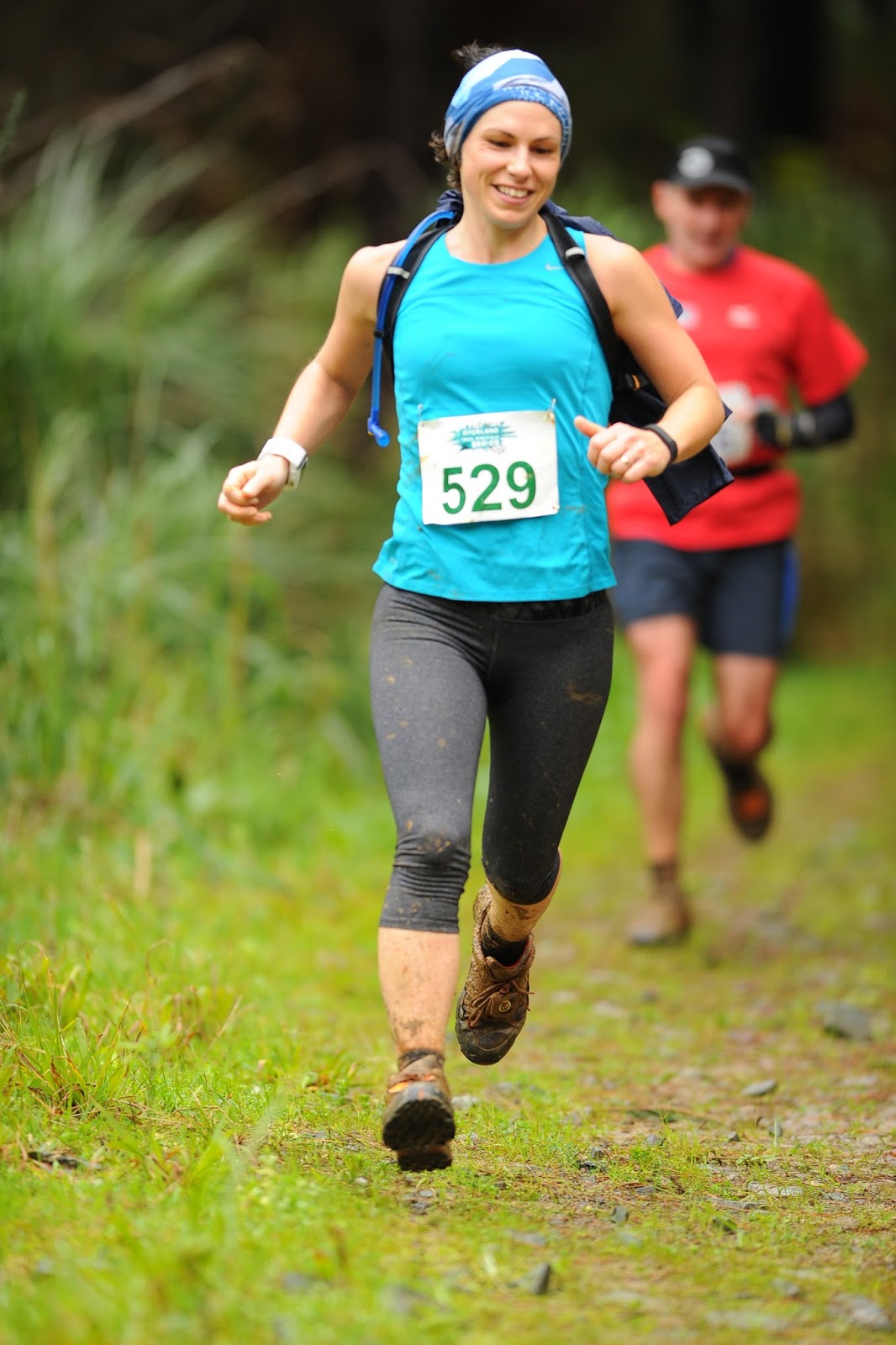 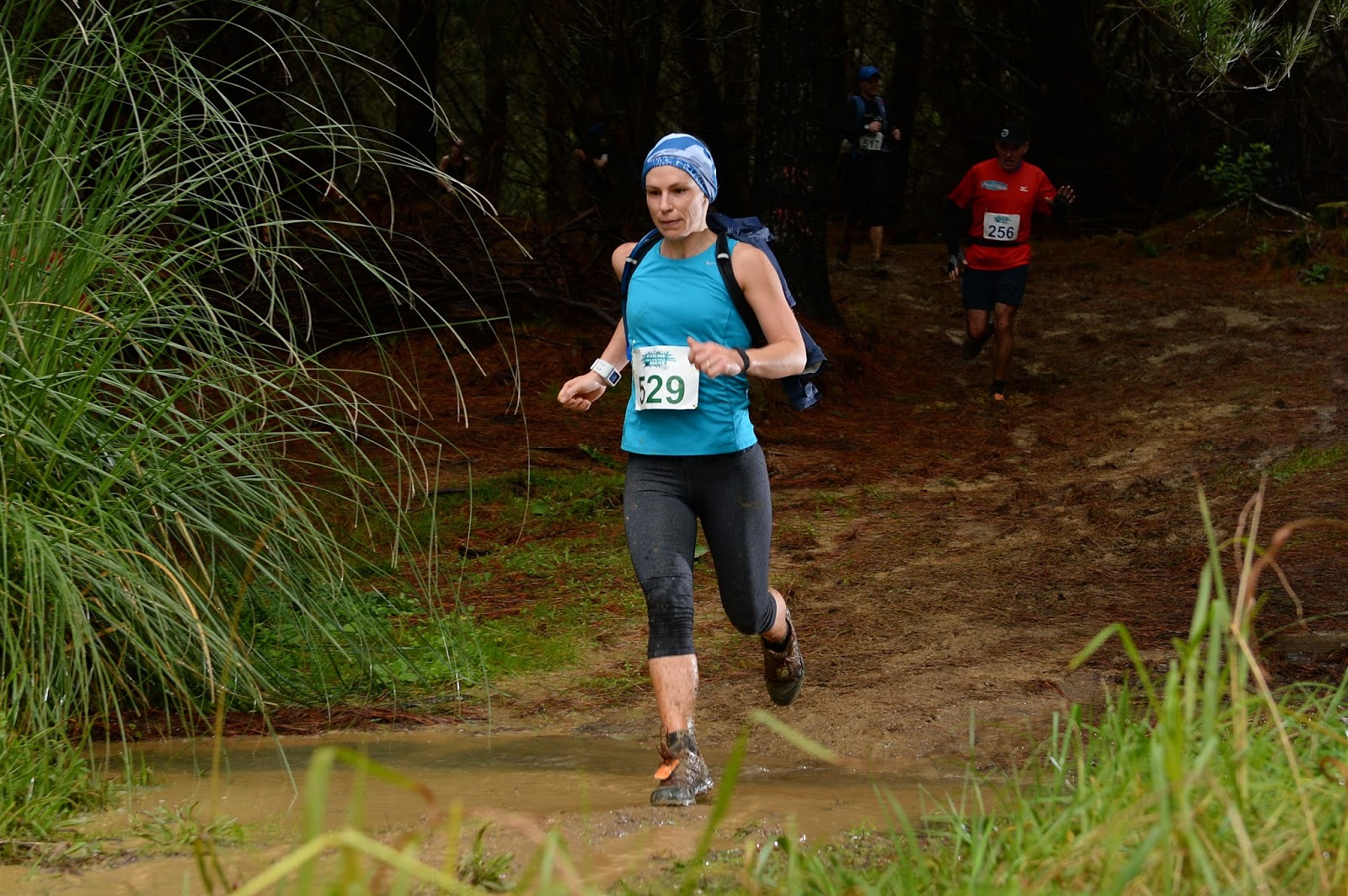 My watch said 14.98km, and I'd run it in 1:49:50.  I'd been feeling pretty strong and was really keen to see where I'd placed.  I jumped in line to grab some freebie noms (cider was top of the list - I bypassed the sausages as usual), then waited around for my friends.  I caught up with Sheryl for a while: 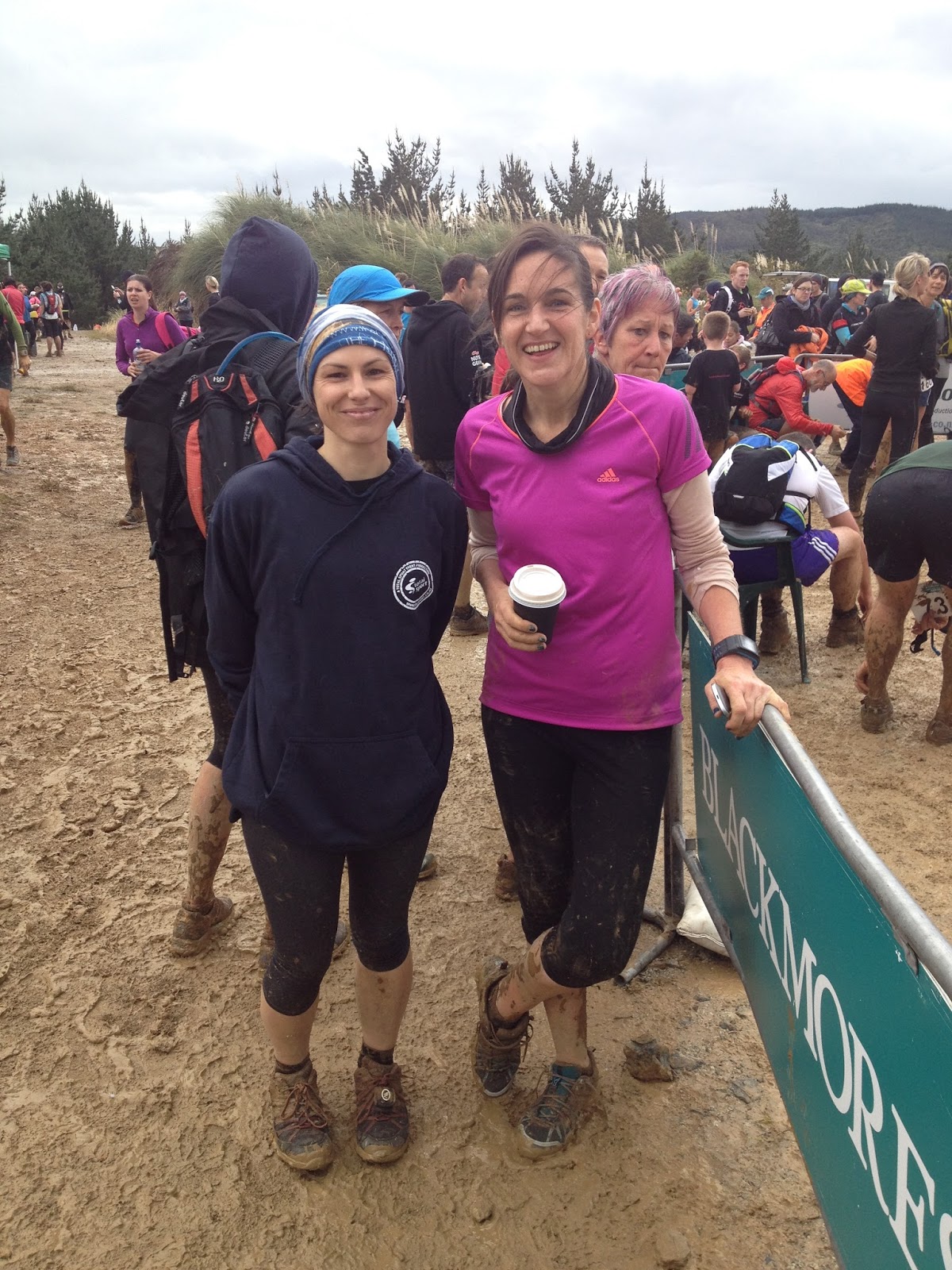 Thanks to her hubby for taking the picture :) (btw, purple-haired lady from the first XTERRA race is right behind Sheryl!)

This picture gives you a little more of an idea of what the place was like - mud, mud and more mud!  I fared pretty well - I didn't slip over and get covered, but the back of my legs were pretty splattered.  I grabbed a hot coffee and waited for Martin to finish his super-long.  He looked like he'd been swimming in the mud, he was covered!  I was very glad I'd packed a roll of rubbish bags after seeing him!  By the time we headed to the car, most of the mud had dried so I could scrape the majority of it off before throwing on a pair of jeans and changing into some clean socks and shoes, then we all headed to Warkworth for lunch.

Dome Valley shall hereafter be named 'The Mud-fest'.  I'm looking forward to seeing what Riverhead is like at the end of August.  It's known for its muddiness - the first race was also in Riverhead and although muddy, I don't think it has a patch on Dome Valley.  It wasn't even on the same scale.  We shall see...  The next XTERRA event is in Waharau on the 10th August, with a toughness factor rating of 9.5/10.  Should be fun ;)
Posted by kreachr at 13:23