I mentioned recently that my marathon training had started, but I wasn't expecting it to go well over the school holidays with Deane often away and the kids (obviously) home 24/7.  I was out of free babysitting options too, which meant I couldn't just sneak out for a quick blat around the neighbourhood.  That was certainly the case for the first week, with Deane in Sydney.  I was a little annoyed about it, but was happy about the fact that I managed to get a lot of other stuff done - spring cleaning and de-cluttering, finishing my laceweight hoodie (more on that later) and lots of other tiny little things that didn't take long to do, but were way down on the priority list.  I didn't even end up jumping on the bike because of aforementioned assorted other stuff.  I had planned on going for two long runs over the weekend - 15km on Saturday and 23-24km on Sunday.  Well, Saturday morning ended up being horrendously wet and windy with severe weather warnings, and I had other things planned for the rest of the day which completely ruled out the first run.  After the week I'd had, I did not hold back on the whinging over missed training!  And I felt the need to make up for it by going for an extra long run on Sunday.  What was going to be about 23-24km ended up being 31km!  And boy, did it feel gooooooooood!  I arrived home in a much, much happier mood.  The weather held out really well, and for the most part I had good company too.  Martin ran to my place, arriving at 7am.  We headed to Cornwall Park and met up with a few others, and proceeded to run a couple of laps including One Tree Hill.  I am very pleased to say I ran up both times without stopping :)  Hill endurance for the win!  After that, they all headed off for coffee/breakfast, and I ran home.  Not happy with leaving it at 29km, I decided to extend the run a little to round it out to 30km - I ended up overshooting a little, oops ;) 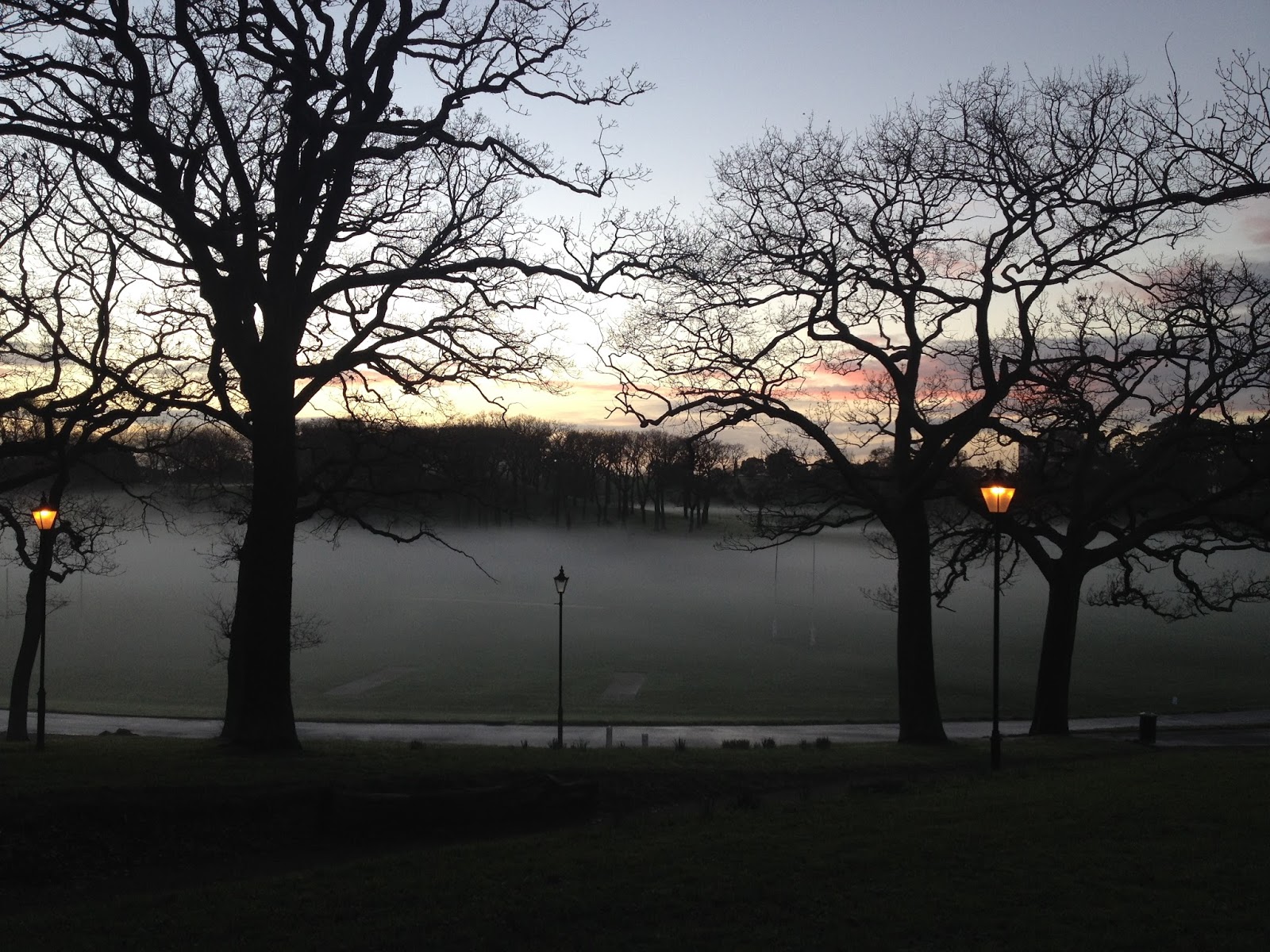 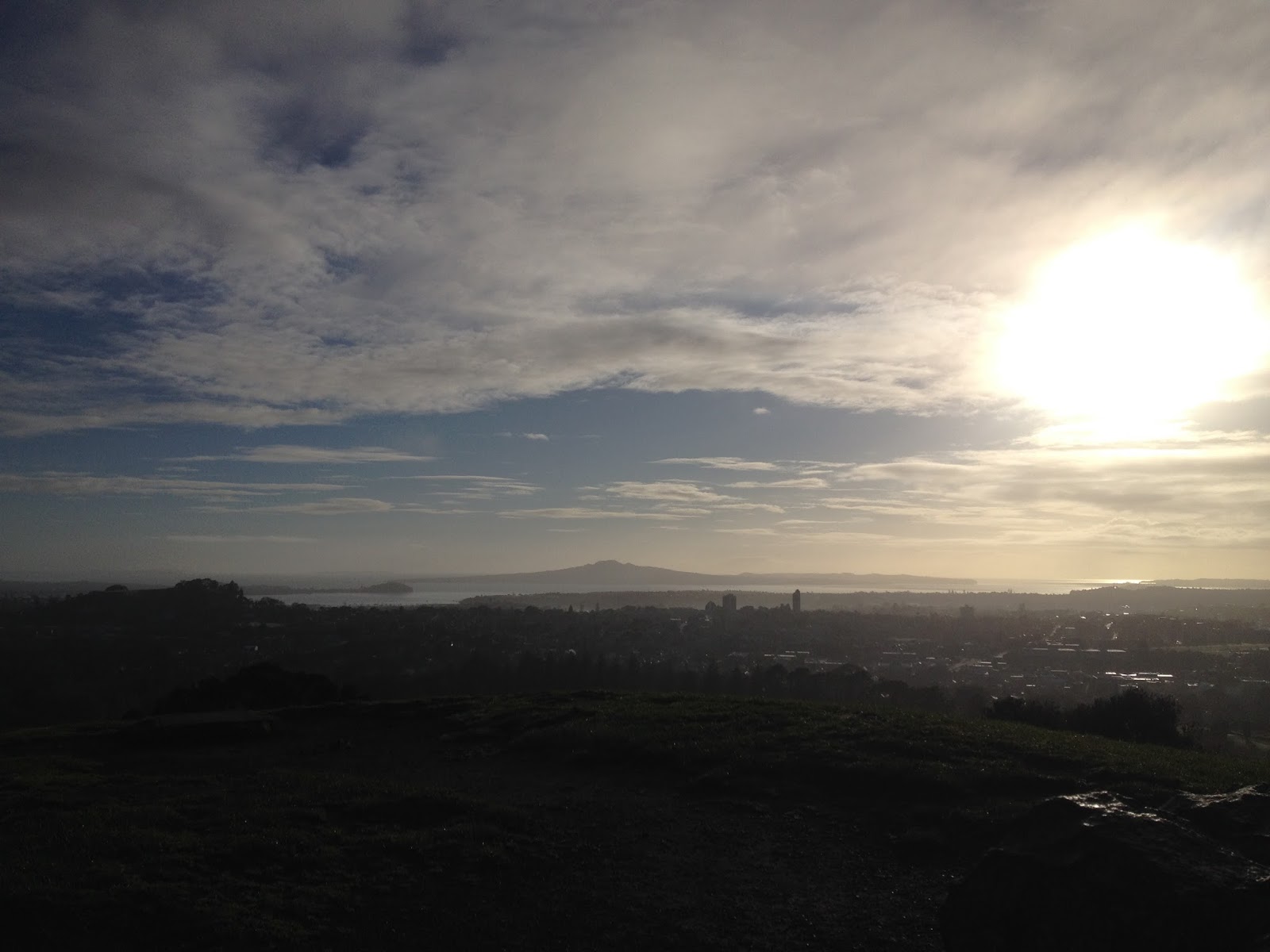 View of Rangitoto from One Tree Hill 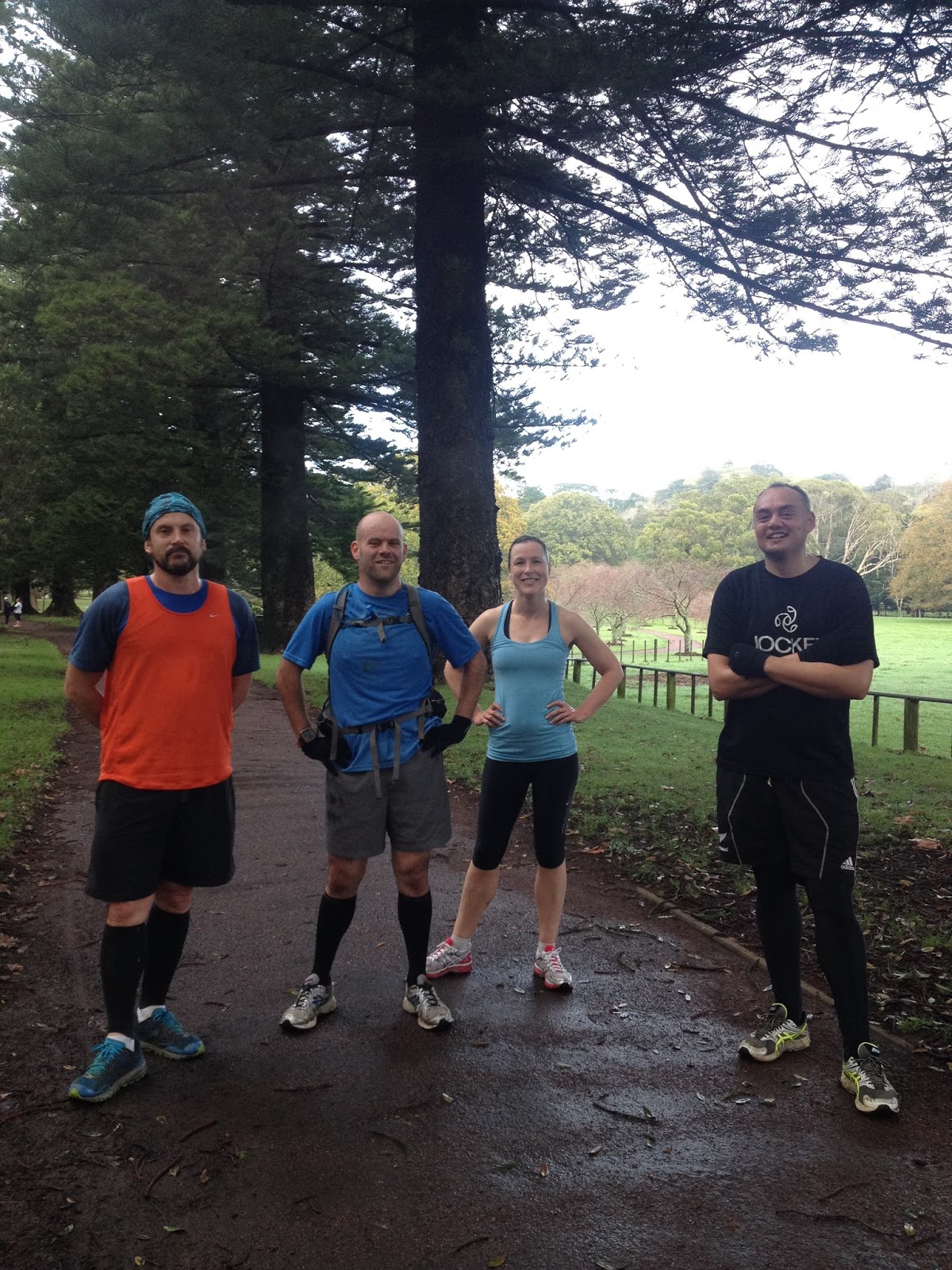 The lovely peeps I got to run with - Richard, Martin, Deb and Dan 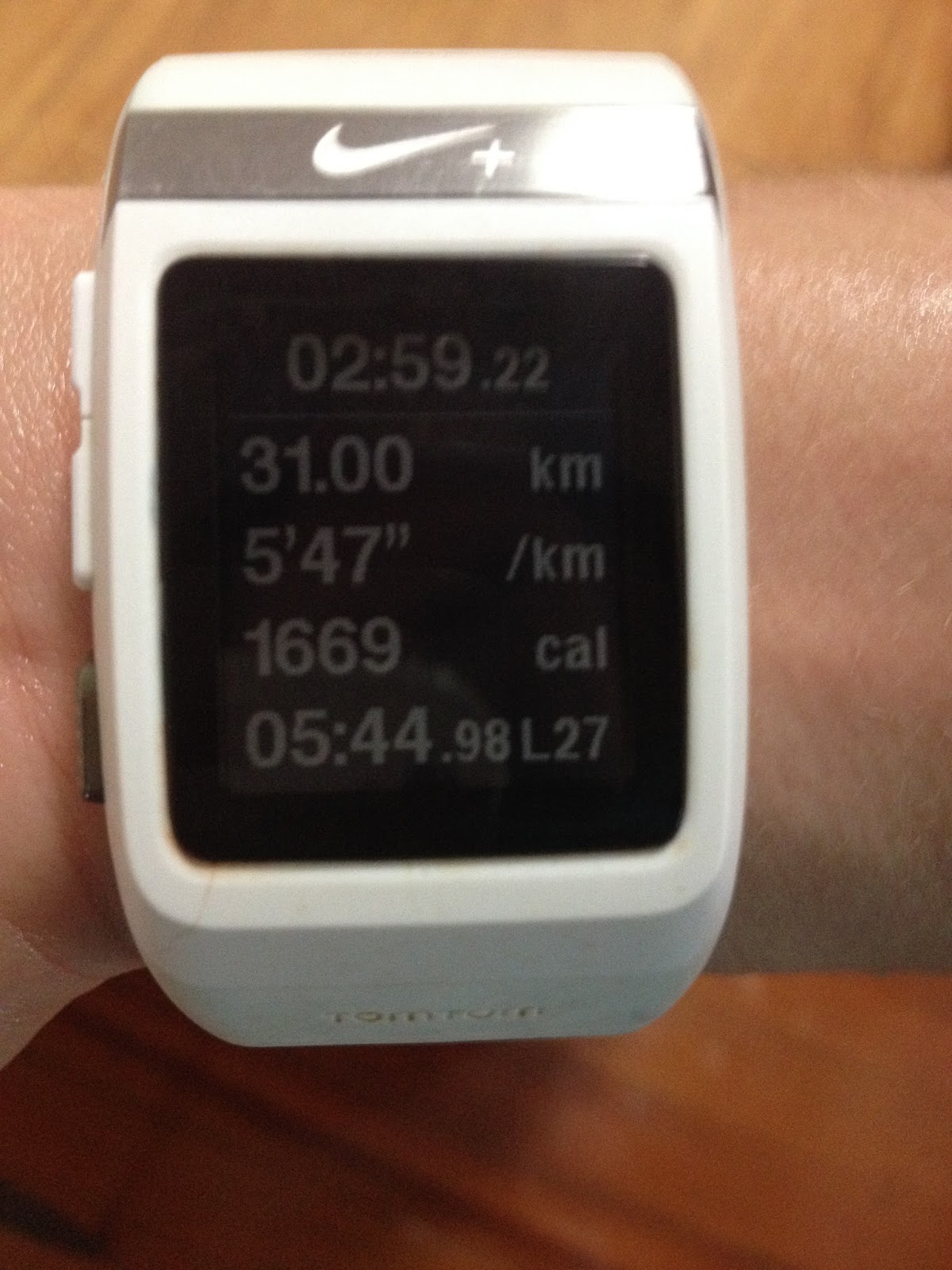 31km, in under three hours no less! (Actual run time - I paused for all the stops)

But I still had another week of school holidays ahead of me, which potentially meant more missed training opportunities.  What to do?  Monday was a rest day because seriously OMG 31km, and Tuesday I finally got around to setting up the bike trainer again so did half an hour of relatively vigorous cycling.  And Wednesday?  Well, Wednesday saw me doing 10km on my brand-spanking new treadmill!!!  The guy who delivered it was kind enough to set it up for me so it was all ready to go. 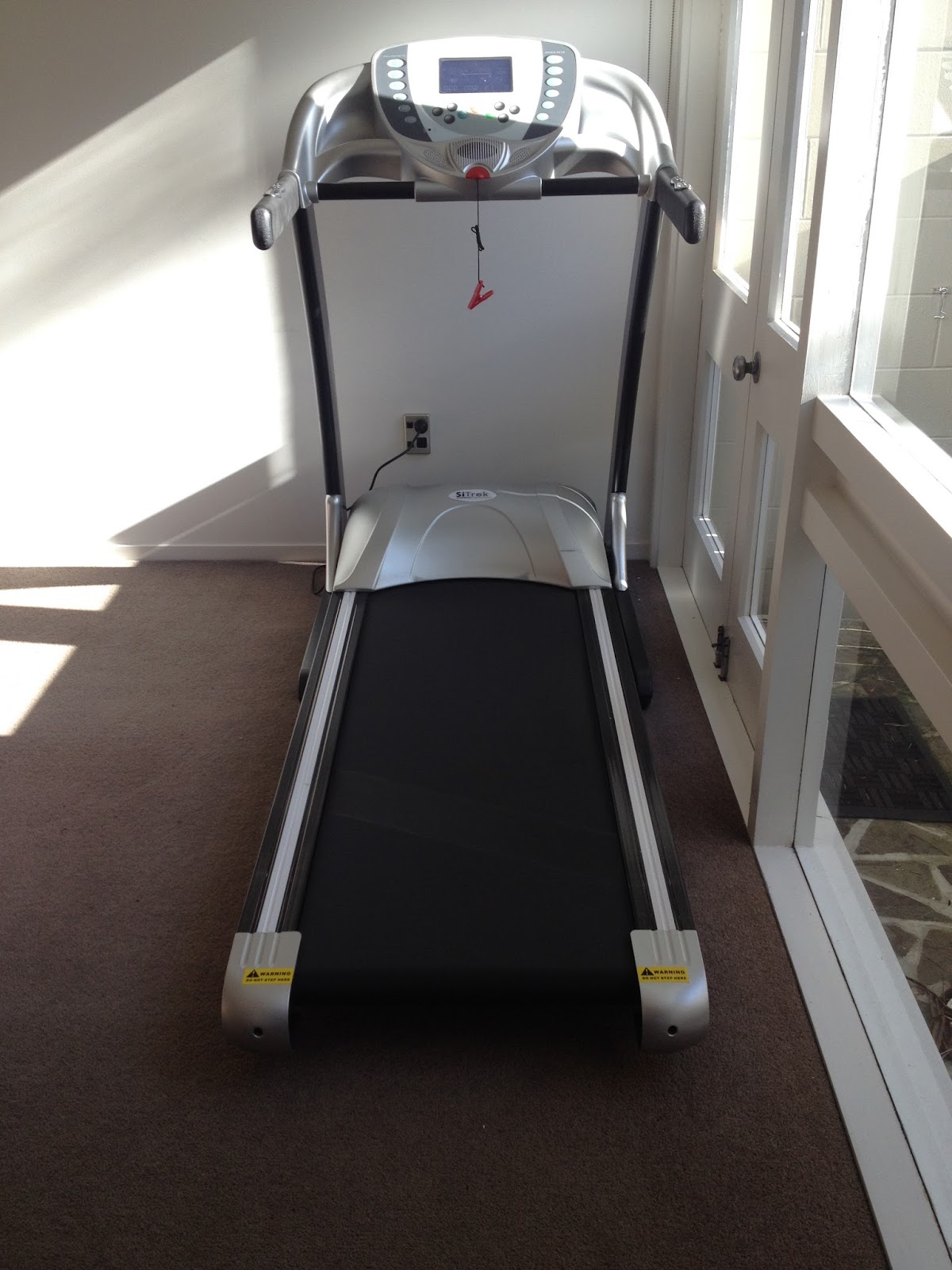 One can only assume my whinging became annoying enough that it warranted a significant purchase...  In case you were wondering, I have since moved it because I quickly realised running while staring at a white wall is incredibly boring.

Thursday morning was a super early start - at 5am Martin and I embarked on a 22km run through a bunch of Auckland suburbs. 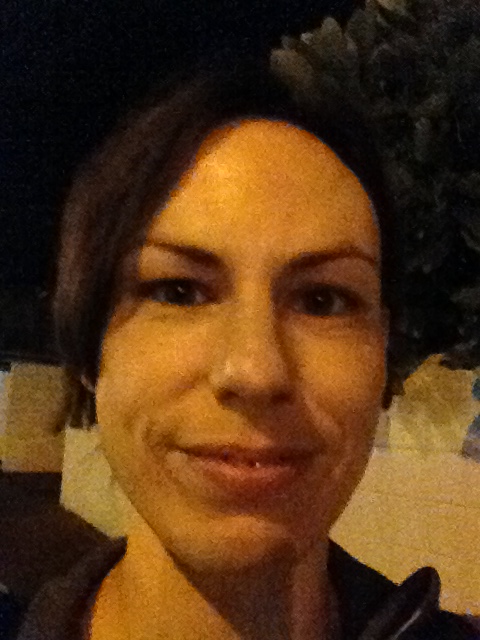 5am and ready to roll!

I took this photo at about 6am, a little over halfway through the run: 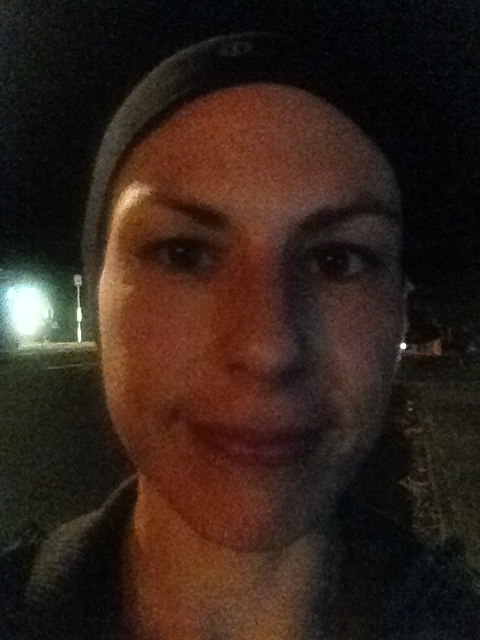 About ten minutes later I tripped on some uneven paving.  Determined not to injure my legs, I managed to do a bit of a sideways dive roll manoeuvre.  My hands hit the concrete, but I landed on the grass verge on my shoulder and did a complete roll to end up on my butt, yelling "I rolled!".  I was rather pleased with myself :)  Apparently it looked pretty stylish too, lol!  It wasn't until the next day that I felt any effects - my shoulder is a little sore, but there's no bruising so I guess its not too bad.  Weird running injuries - I haz them ;)  The views on the run were pretty good, although as always, the pictures don't really show it: 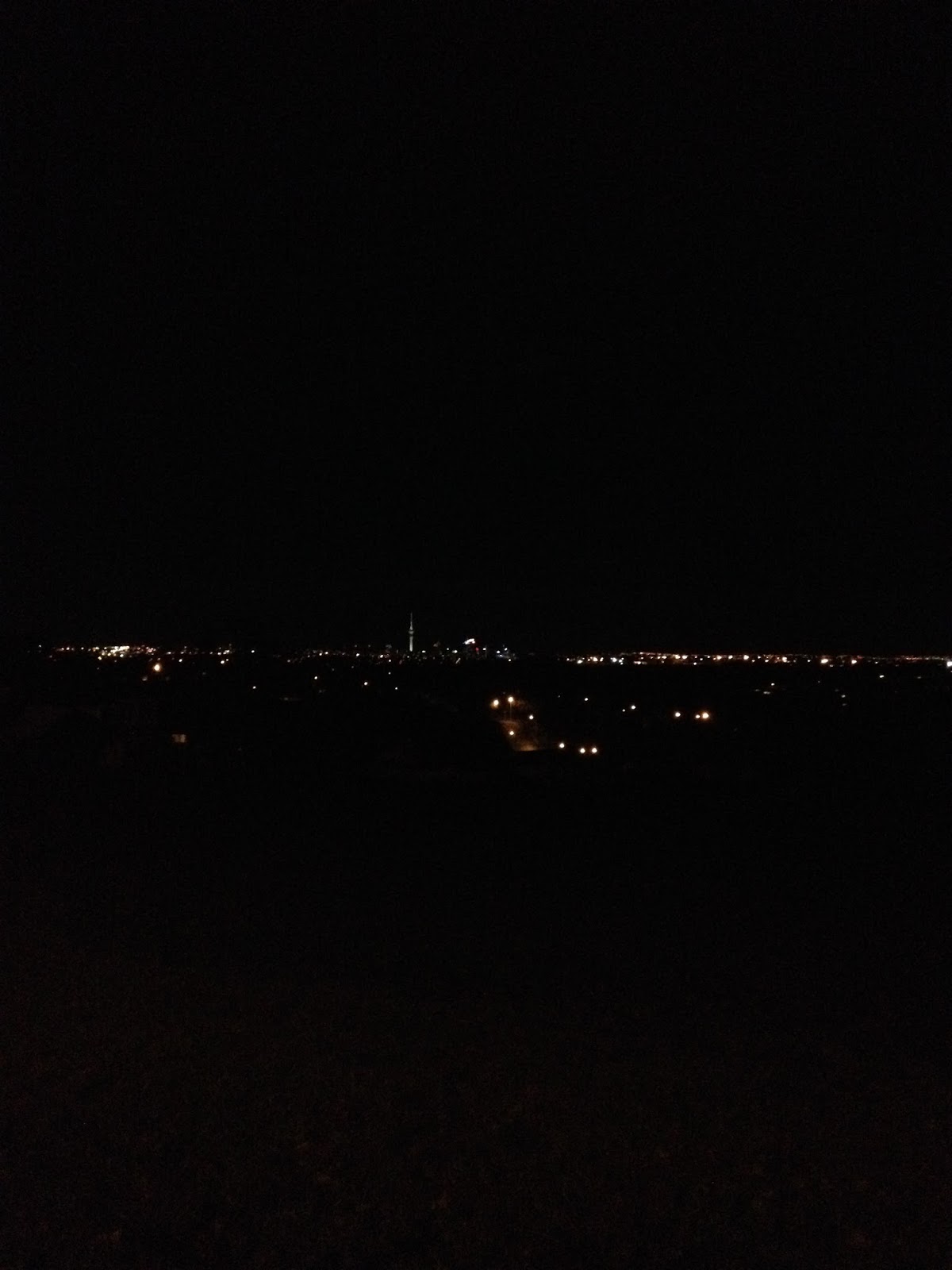 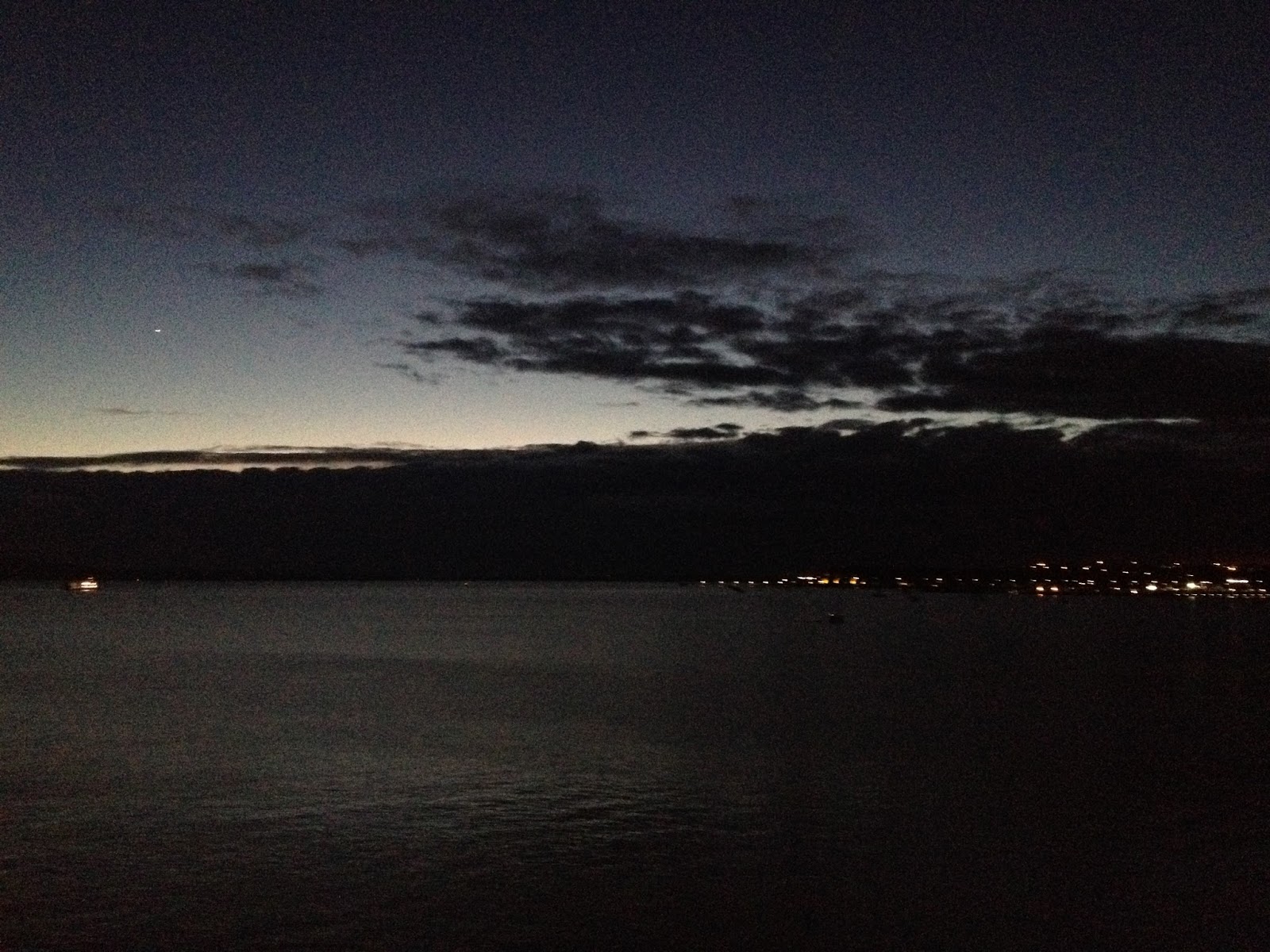 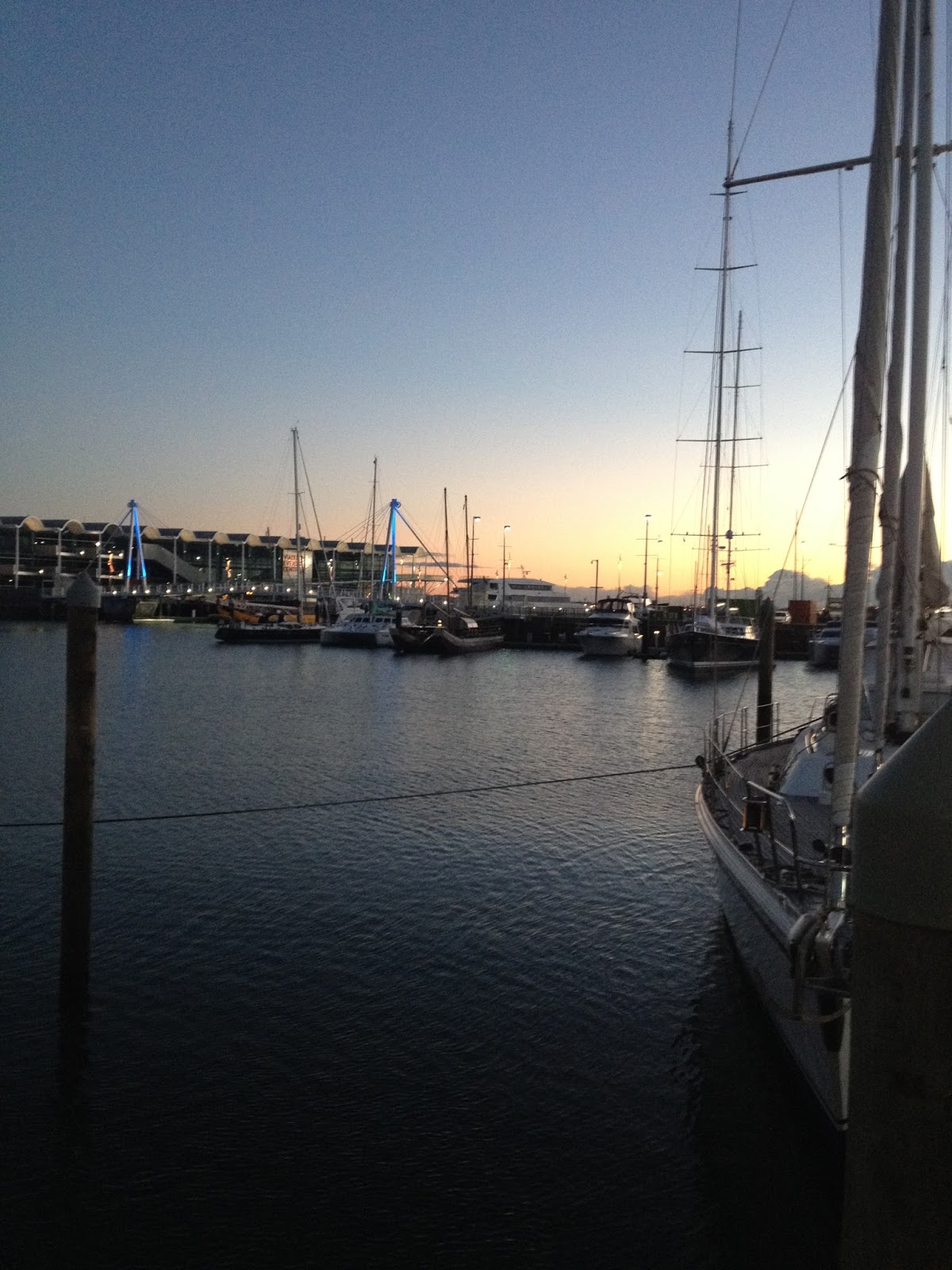 Hello sunrise, nice to see you.

Friday was another 10km on the treadmill, this time while watching a Harry Potter movie with the kids.  Much more interesting than a blank wall ;) 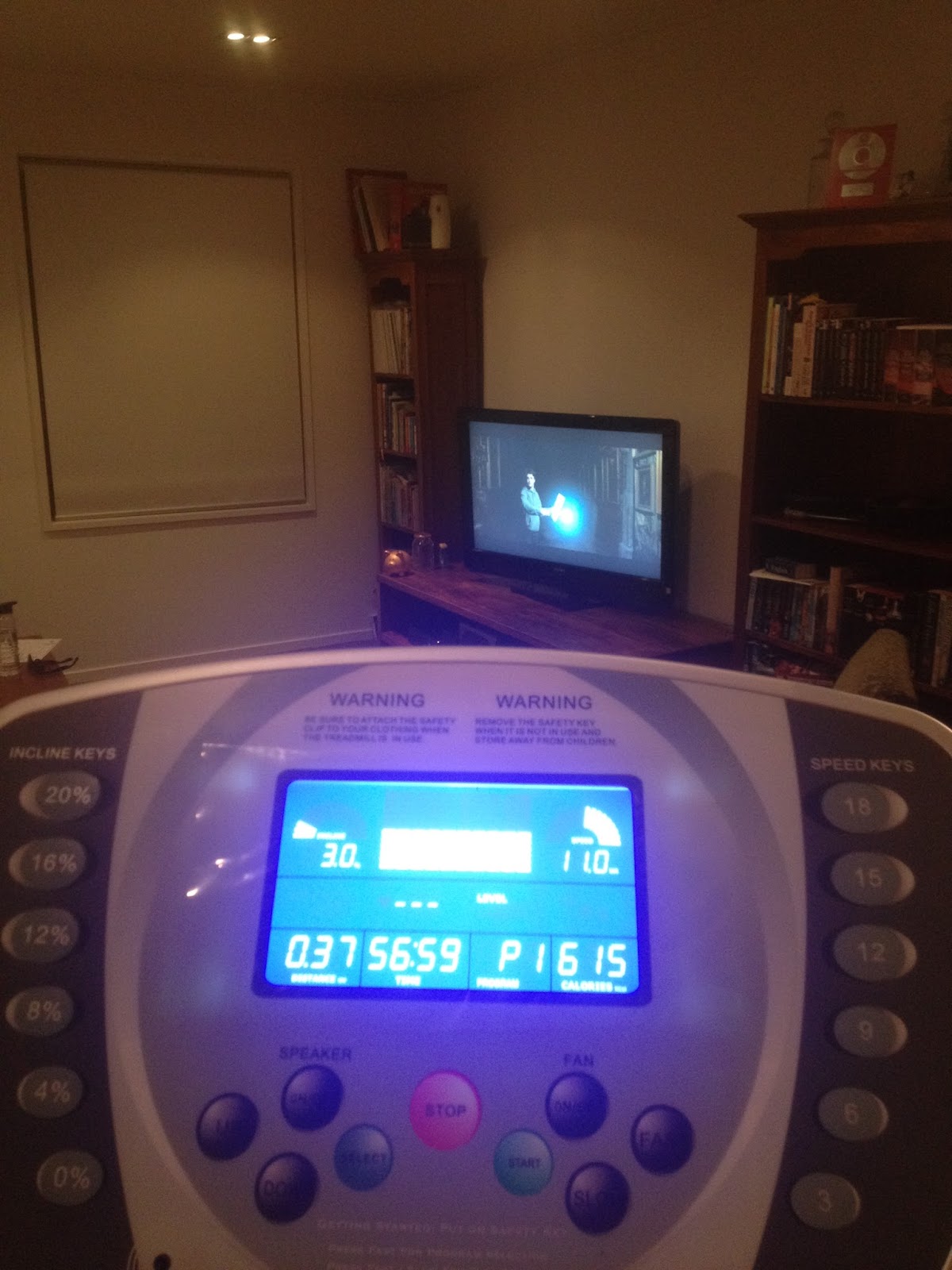 Yep, that treadmill is pretty darned handy...  there's no excuse to skip marathon training any more!  If I can't make it out the door, I can still get a run in.  Hurrah!  Less than three months to go now, so training is in full swing.  Game on!  Gosh, that marathon is creeping up fast...  The combination of the looming marathon and the 50 Days of Winter Running challenge has really made an impact on my weekly mileage.  I've enjoyed participating in the challenge, and seeing how others have been progressing as well.  It definitely kept me motivated!  And in case you were wondering, the challenge is also the reason for the run-selfies lately. Y'know, in case I didn't manage to get a good pic of the scenery...  Don't worry, I spared you from most of them ;)  Tomorrow marks the end of the 50 days, and it will be finished off in style with a 15.5km gnarly trail run in Dome Valley.  Looks like the weather will be cold and wet too.  Fitting I guess, for a winter running challenge... 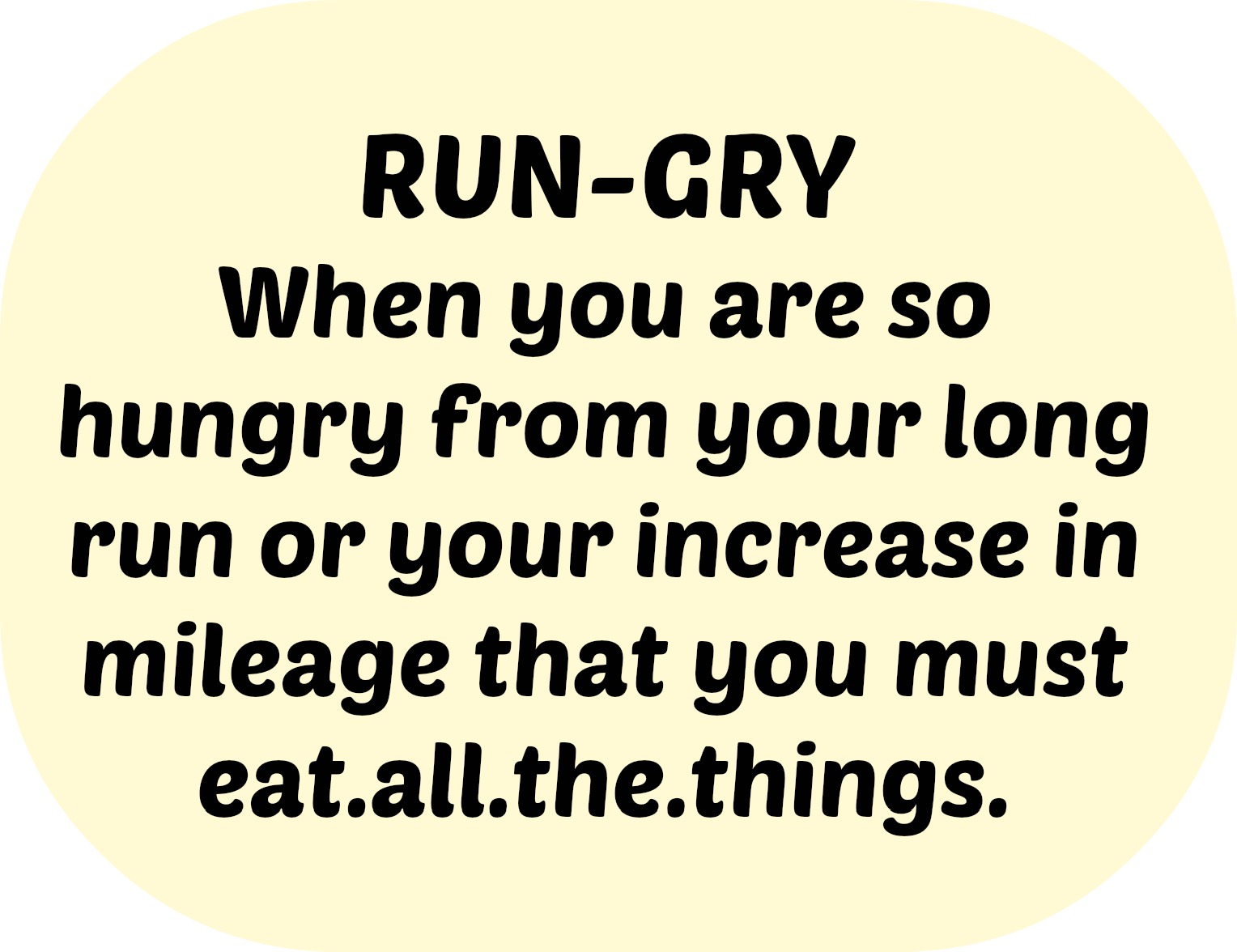 I can relate to this one (although sub the greek yogurt for granola): 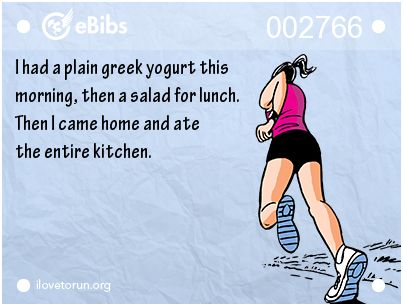 Eating so much food!!!  I have a granola addiction at the moment - current faves are the chunky chocolate buckwheat granola (seriously love that stuff!) and a new find, coconut macadamia granola.  I made a batch, then ate a quarter of it in the first two days.  Dangerously good!  I subbed pine nuts for the hemp seeds since we can't legally buy hemp seeds for human consumption in New Zealand, and they worked really well.  I think I'm going to have to stop making granola for a while, because I end up eating it for breakfast, snacks, dessert, sometimes lunch, or second dessert, or third dessert... yeah, too much granola...  But just look what happens when you try to branch out and make something nice like blueberry oatmeal waffles: 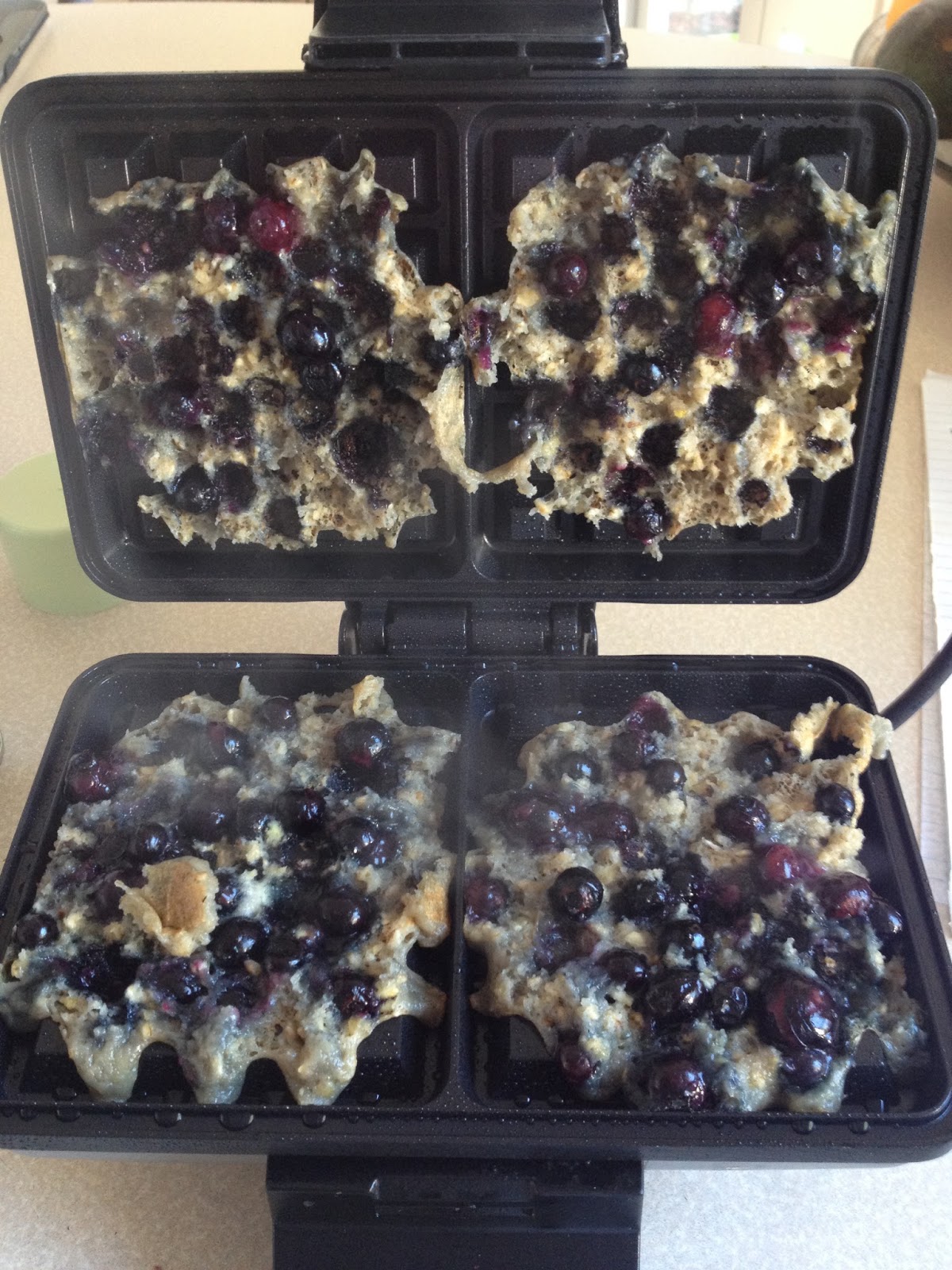 After that minor fail, I managed to salvage my breakfast by making pancakes with the remaining batter: 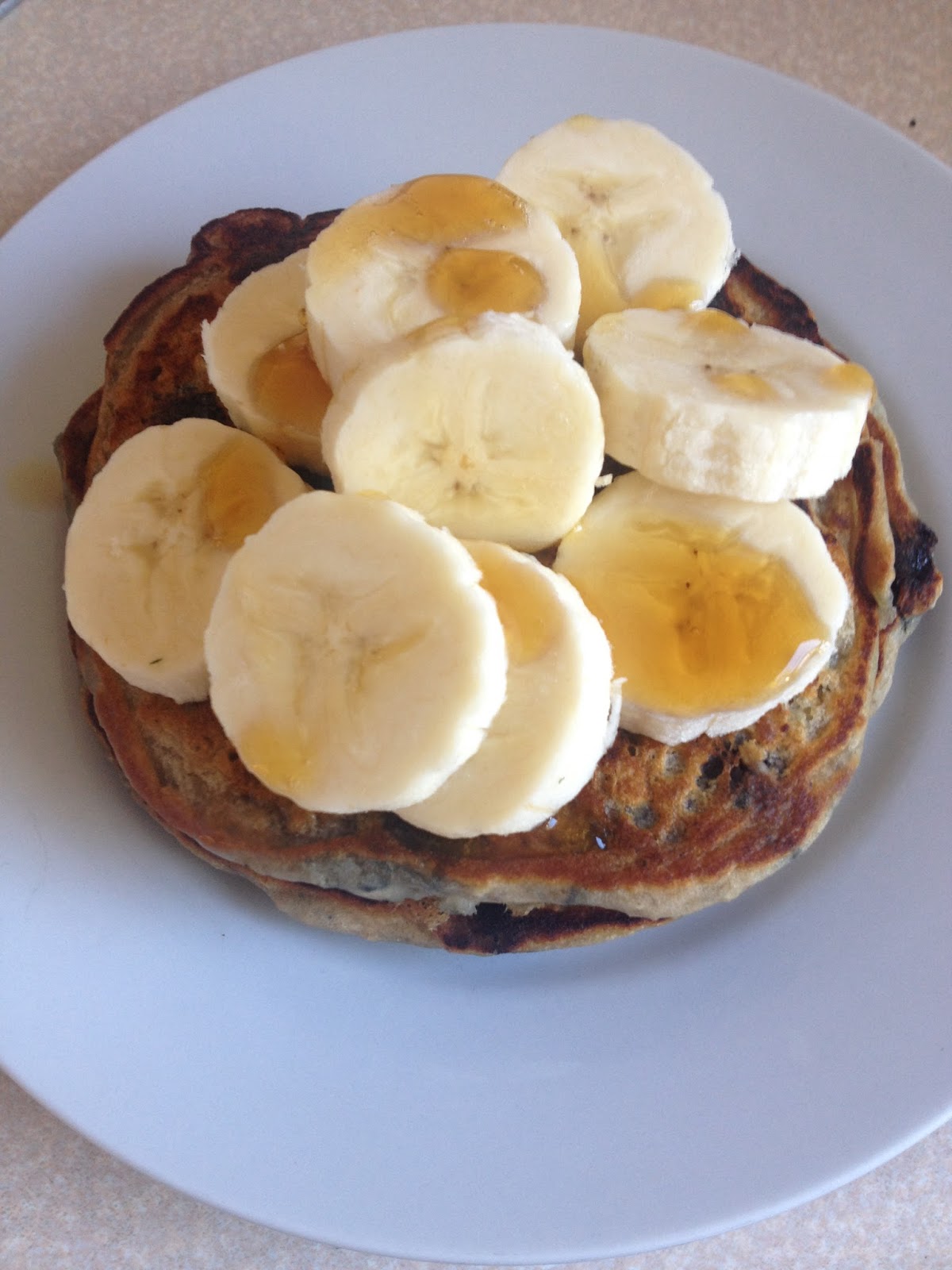 I stumbled across a new product in the supermarket the other day, and after a quick perusal of the ingredients list, happily added it to the shopping basket: 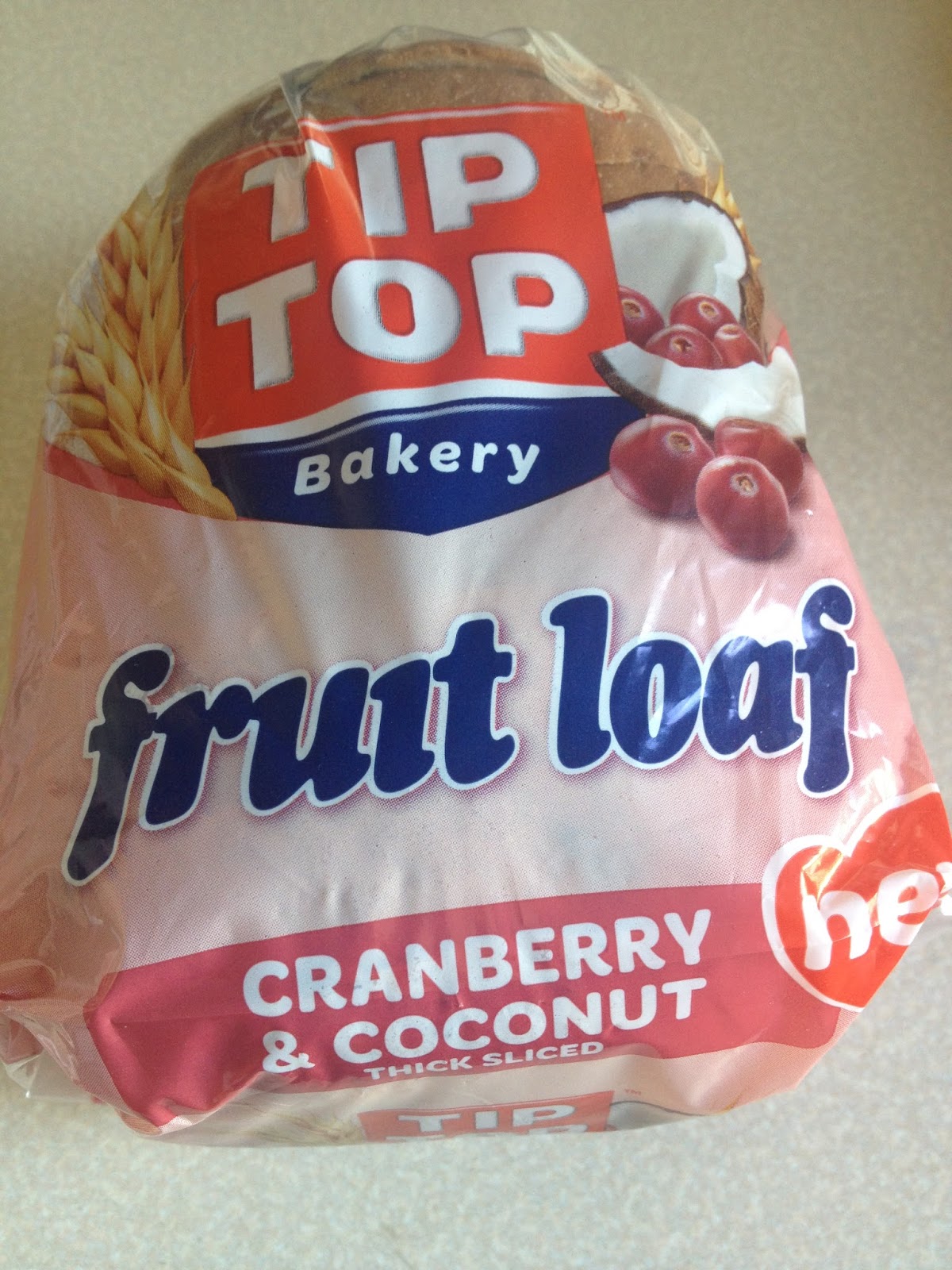 You must go out and buy this bread and try it.  Yuuuuuuuuuum!!!  Nobody else here is eating it so the whole loaf is mine!  And I've nearly finished it already...  The slices are super thick, and its great toasted with jam, or cashew butter, or just dairy free margarine.  Again, not really eating it for breakfast...  Unless breakfast is now an all-day thing ;)

Okay, this post is getting super long, so I'm going to finish up here.  Next post - Dome Valley race recap.  Post after that - knitting!  Yep, still knitting, just not as much.  I've got a few finished projects to tell you about, so I'll see you again soon :)  Enjoy the rest of your weekend!
Posted by kreachr at 22:14