Very (very) early on Thursday morning I rolled out of bed - 4.10am to be exact - and met Martin for a 26km run.  We didn't muck around that morning, only stopping briefly a few times, and finished our run in under 2 1/2 hours.  We didn't chat much (Too early?  Nothing left to say after so many long training runs together?  Who could say?).  But we did discuss the upcoming weekend's XTERRA event in Waharau.  I had made a tentative decision earlier in the week to move up from the long distance to the super-long, as the event stats sounded like the perfect training run for Waihi - 21.1km with around 1,400m elevation gain (only about 400m less than Waihi, in half the distance!).  With compulsory gear required such as seam-sealed waterproof jacket, thermal top, gloves and hat, and emergency blanket, it sounded like just what I needed to gauge my progress and fitness (and mental preparedness) leading up to Waihi.  After discussing it with Martin (ie: he insisted) I committed to the idea.

So bright and early Sunday morning we all (Vaughan, Martin, Lindsay and I) trekked on out to the Hunua Ranges, with a bit of a close call on petrol - bless the people that built a service station on the corner of Kaiaua and East Coast Roads!!!  As always we arrived nice and early, and because we had a car-load we got to park really close to event base (and the portaloos - bonus, or drawback?  I can't decide...)  I officially 'upgraded' to the super-long distance and got a new race number, then hung around until race briefing.  They had a little more to say this time, particularly concerning the ruggedness and remoteness of the course, the compulsory gear requirements that were 'definitely going to be checked', and personal safety.  It was going to be tough, with a 'toughness factor' of 5 out of 5.  I was ready!

The start horn sounded, and we were off.  Martin, Vaughan and I stuck together and chatted off and on during the hard slog up the hill. 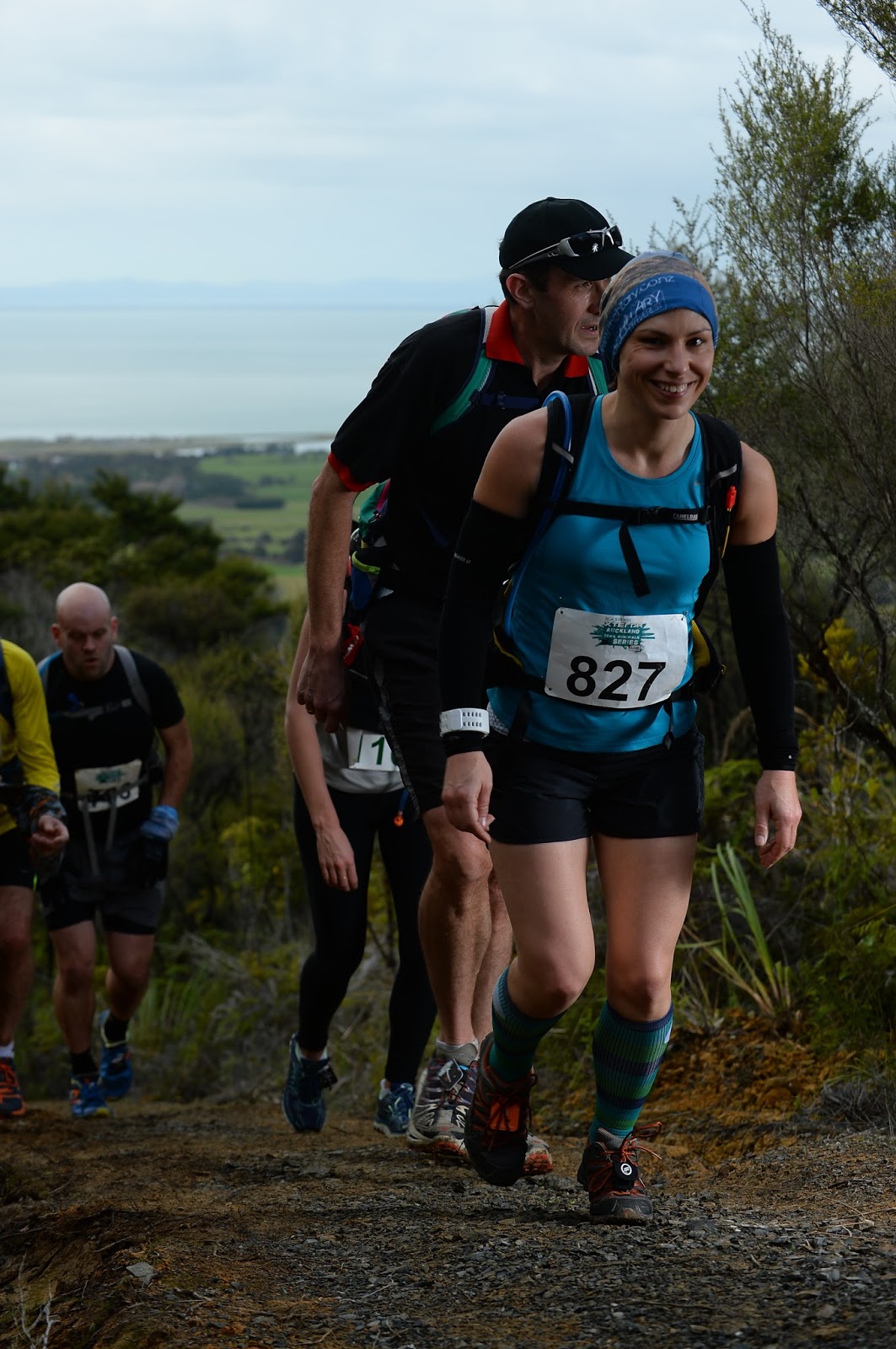 By 1km in my calves were burning and my shin splints were screaming at me!  There was a nice bit of downhill a little way in that helped relieve them ever so slightly before more relentless uphill.  We stopped at a viewing platform about 4.5-5km up the hill to take some photos of the stunning view, because why not? 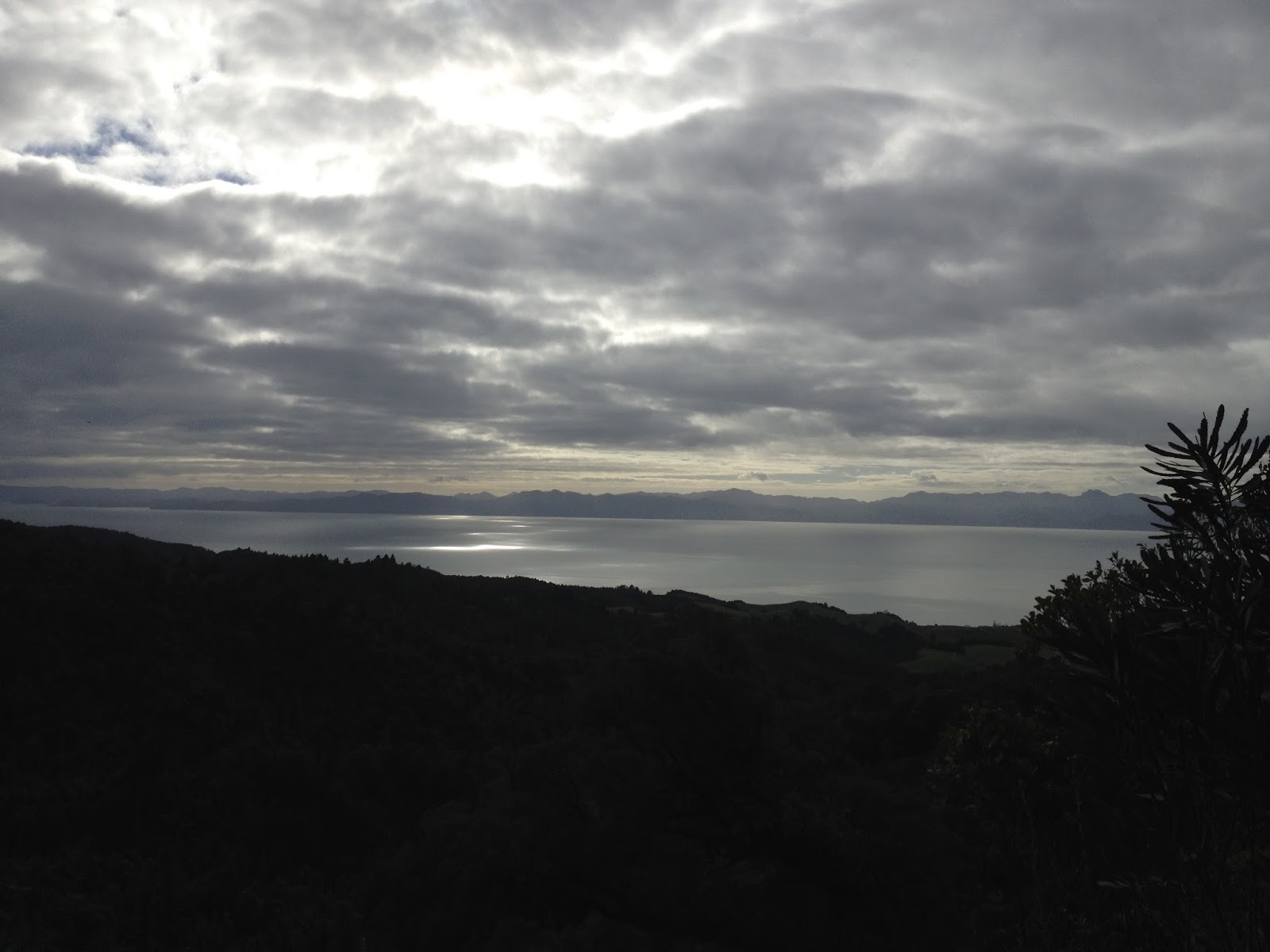 The Firth of Thames, looking out towards the Coromandel.  Absolutely beautiful.

Then it was straight back into uphill slog before reaching the aid station and peeling off from the longies.  This is where they were supposed to be doing compulsory gear checks.  They didn't.  But it was where the course got really fun!  Rugged and remote, you say?  Yeah, I'd call that a pretty accurate description... 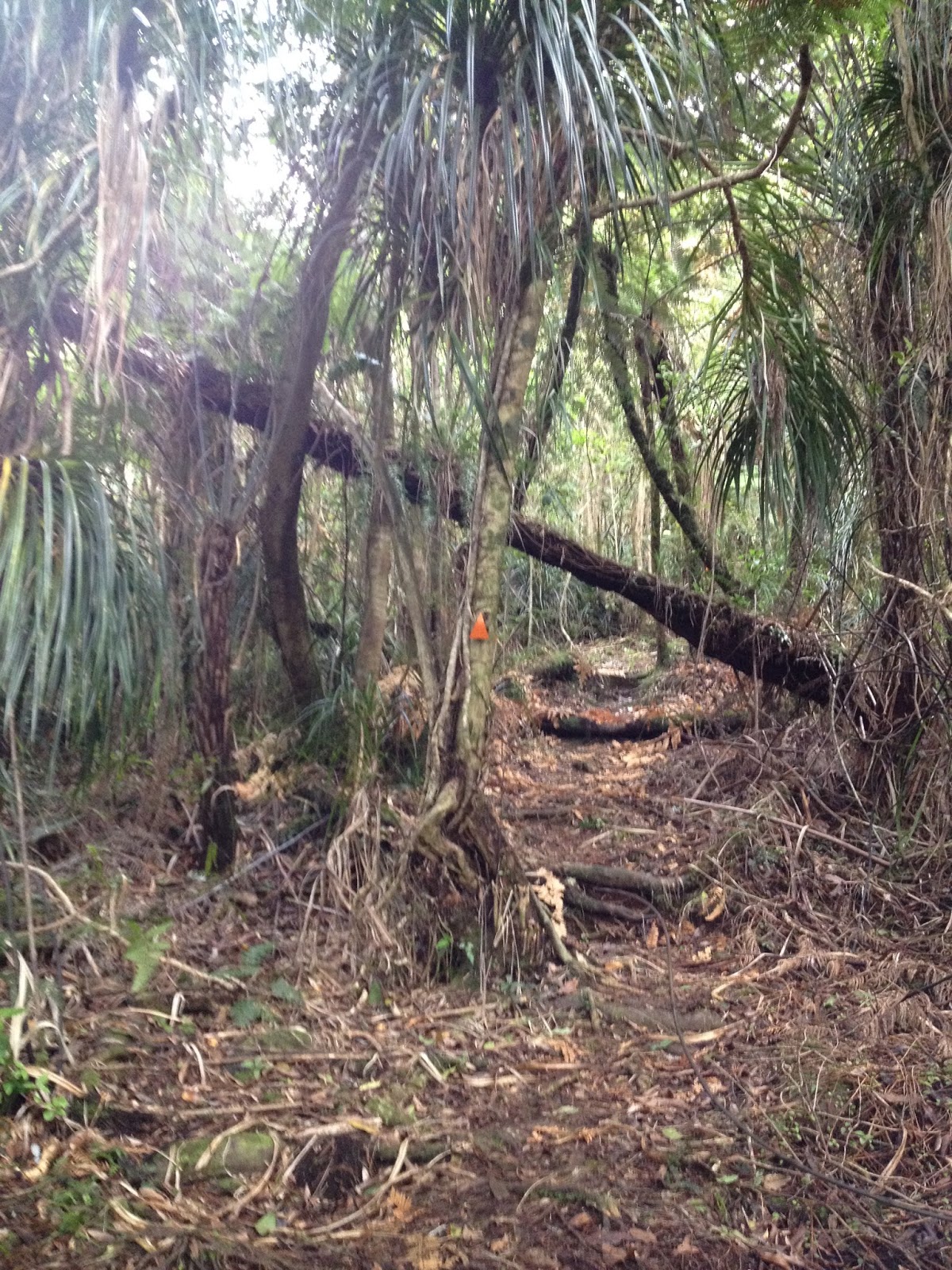 Those little orange triangles nailed to trees were often the only way of telling where the trail was!  Stomping through the bush riddled with gnarly tree roots and low-hanging branches, fallen trees and vegetation, rocks and mud with a barely discernible single trail made me feel pretty bad-ass, I'm not gonna lie.  Martin lost a shoe in a giant mud-puddle, and the polite thing would've been to wait for him to locate it and put it back on.  I managed to hang around long enough for him to find it and shake some of the mud out before I took off.  I couldn't help it, I was itching to keep moving!  (He lost a shoe a total of three times over the duration of the event.  Hopeless... ;P).  At a little over 10km in we arrived at the trig station - the highest point of the Hunua Ranges at 688m.  Martin and Vaughan were a little way behind so I took the opportunity to climb up to the viewing platform and snap some pics: 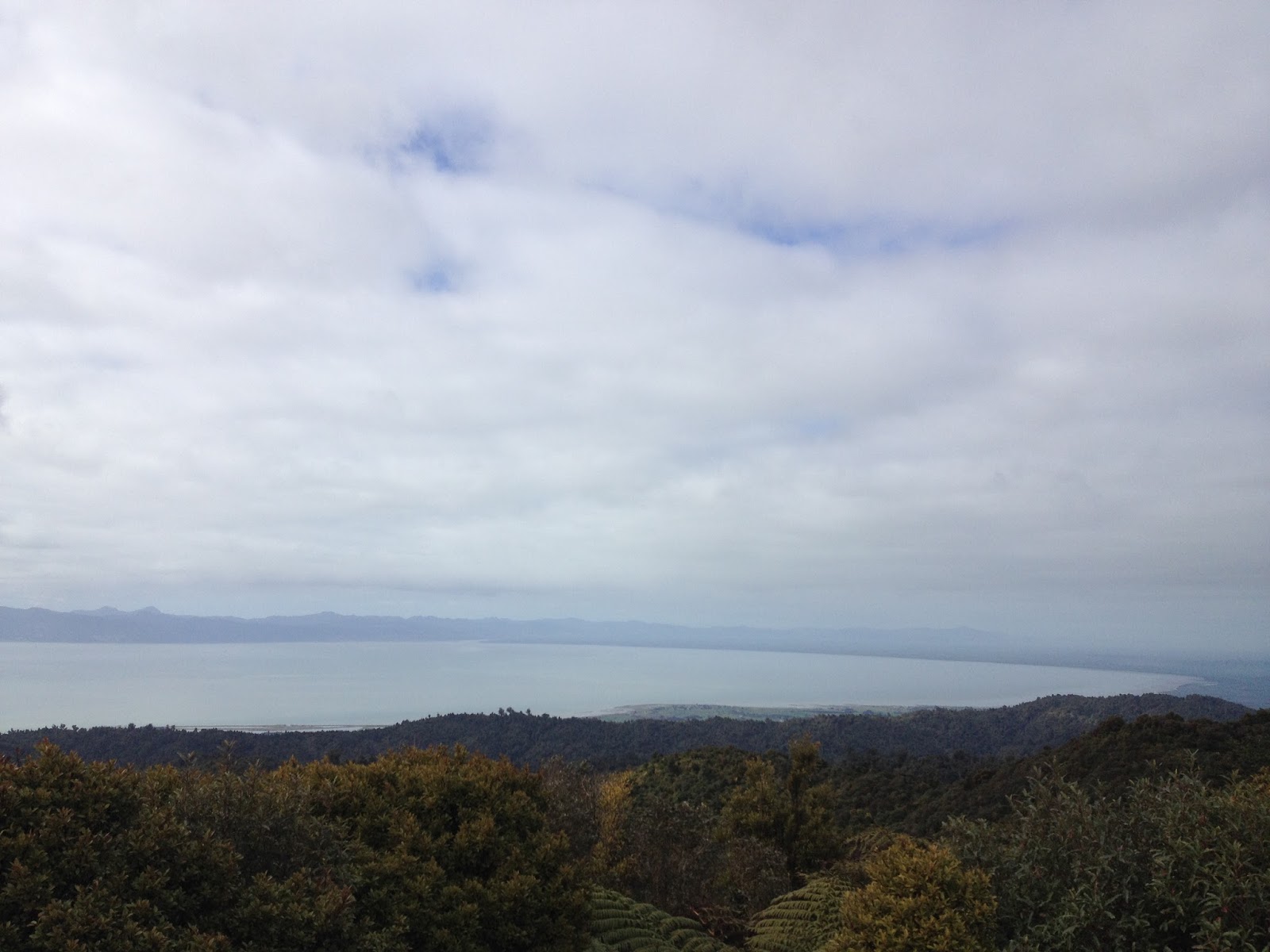 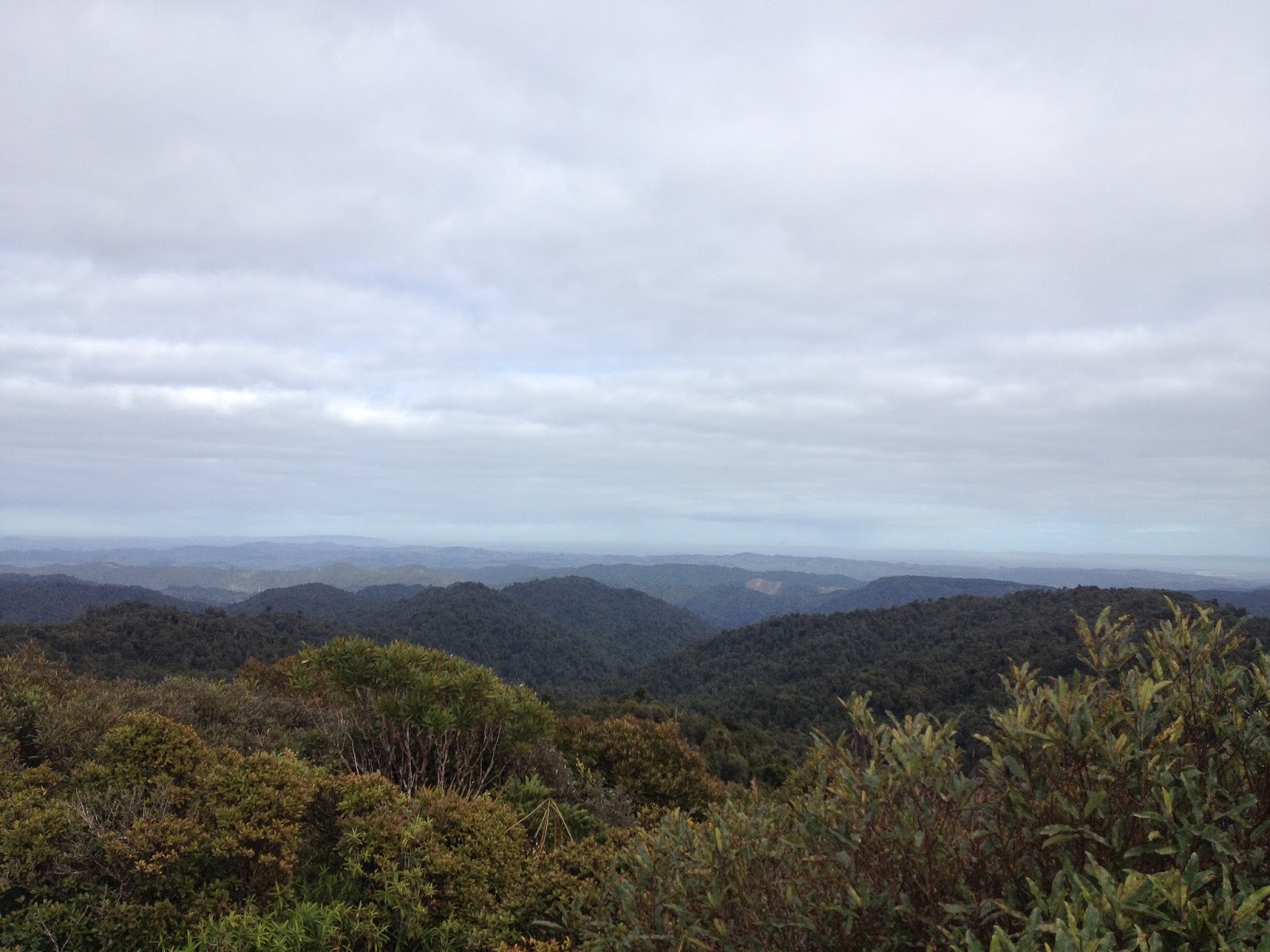 Then we were off again.  There were a few more kilometres of up-and-down trail, some exposed with knobbly, uneven grass underfoot, some with super-steep muddy trail, and some with gravel track, all of it stunningly beautiful: 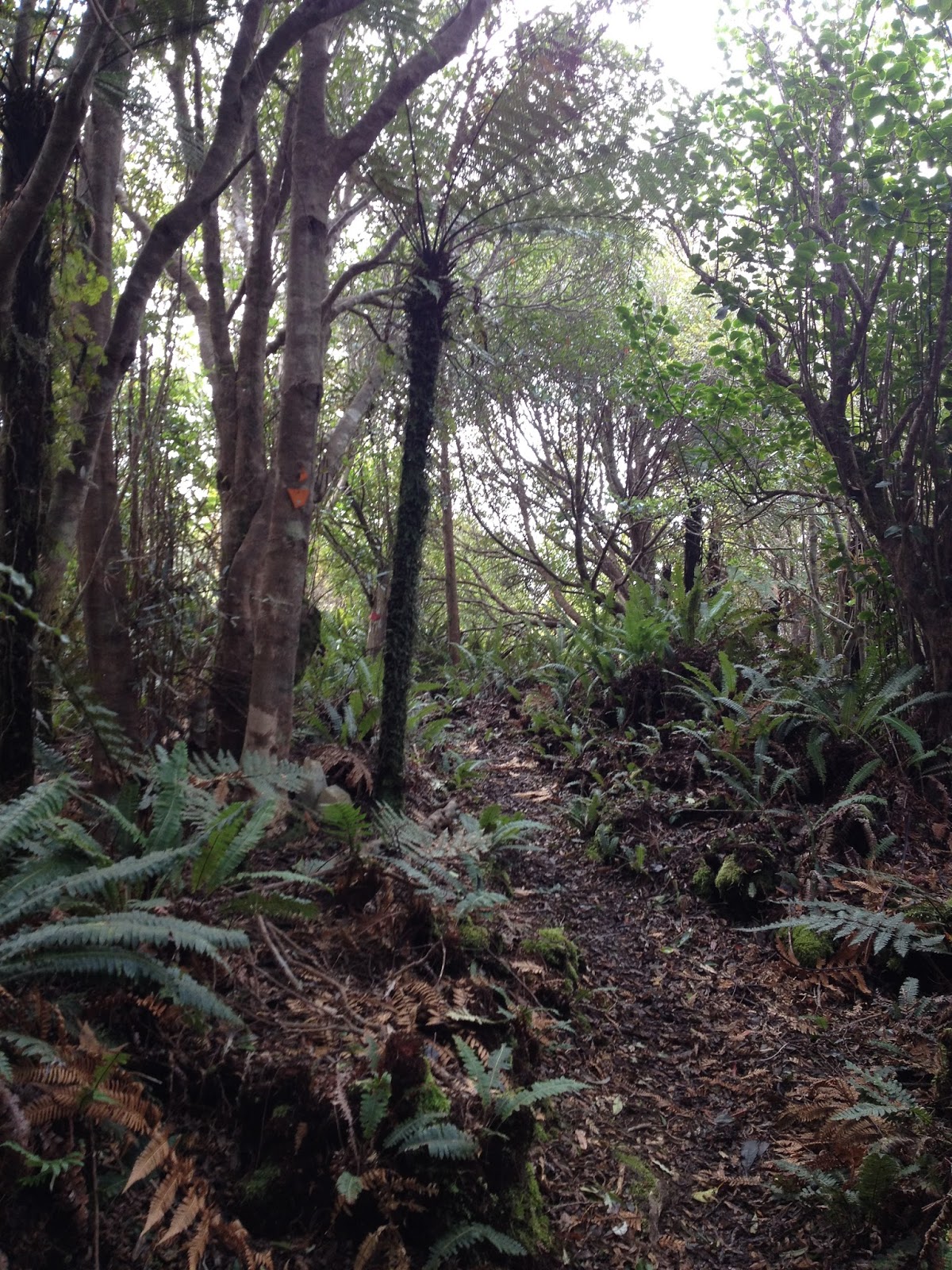 After around 13km, it was time for the wicked downhill section!  This is where I left the boys behind, and because there weren't a lot of people around (the fast runners were well and truly gone, and the rest of us were pretty well spread out), I spent large chunks of this section completely alone except for the few people I passed.  There is something quite magical about being alone and flying through the bush with just the sound of your breathing, your footfalls, and native birds singing all around you.  It is one of the things that makes me truly happy.

The shorter-distance events had finished already, so there wasn't a bunch of people to join up with for the tail end of the run.  It was pretty quiet, so I got a bit of a surprise when the photographers made a whooping noise to alert me to their presence right before a stream crossing.  I got a little disorientated with the unexpected sound and didn't get to go crashing through the water for an awesome photo - instead, I got careful stepping with a slightly confused look... 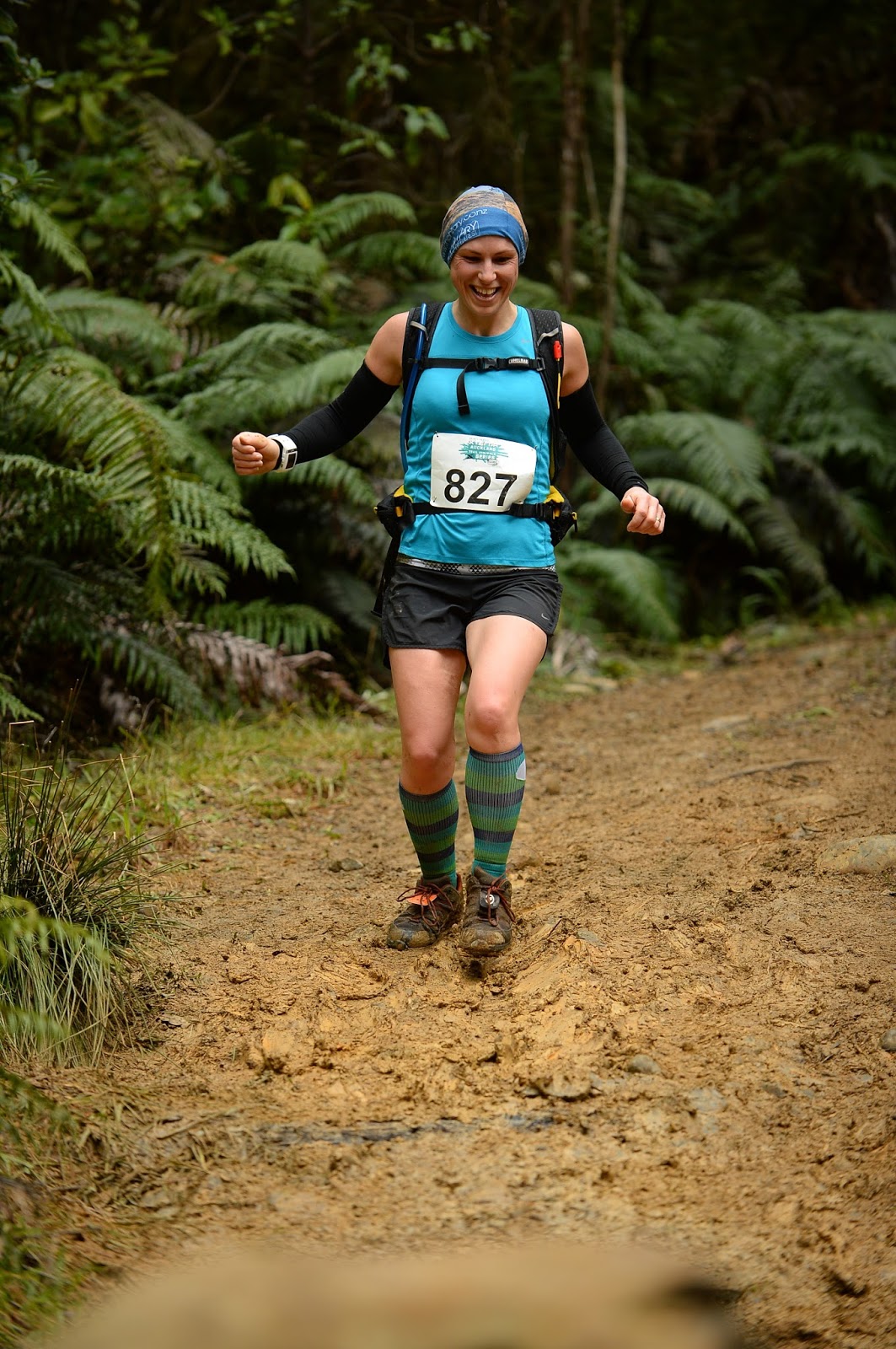 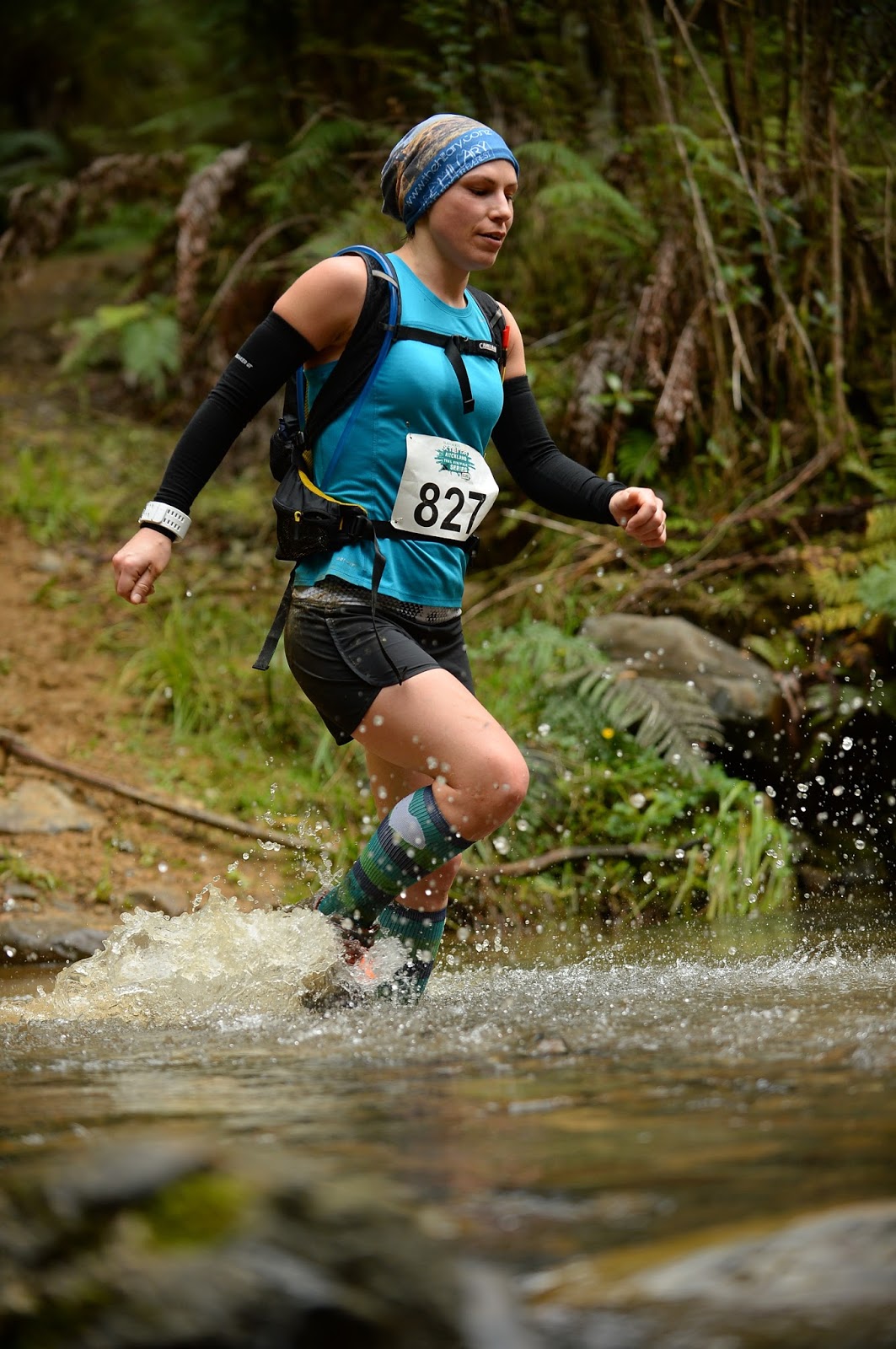 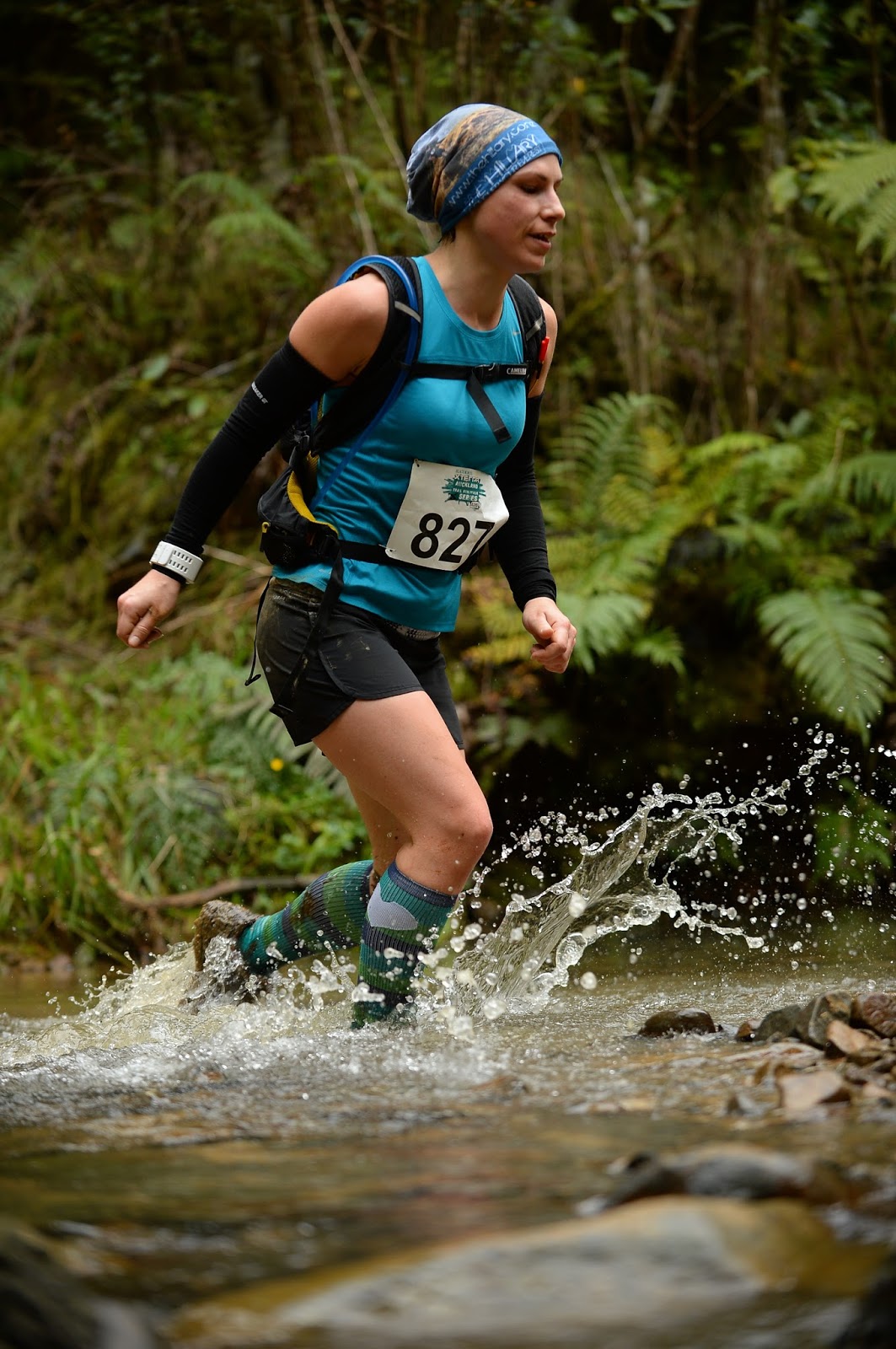 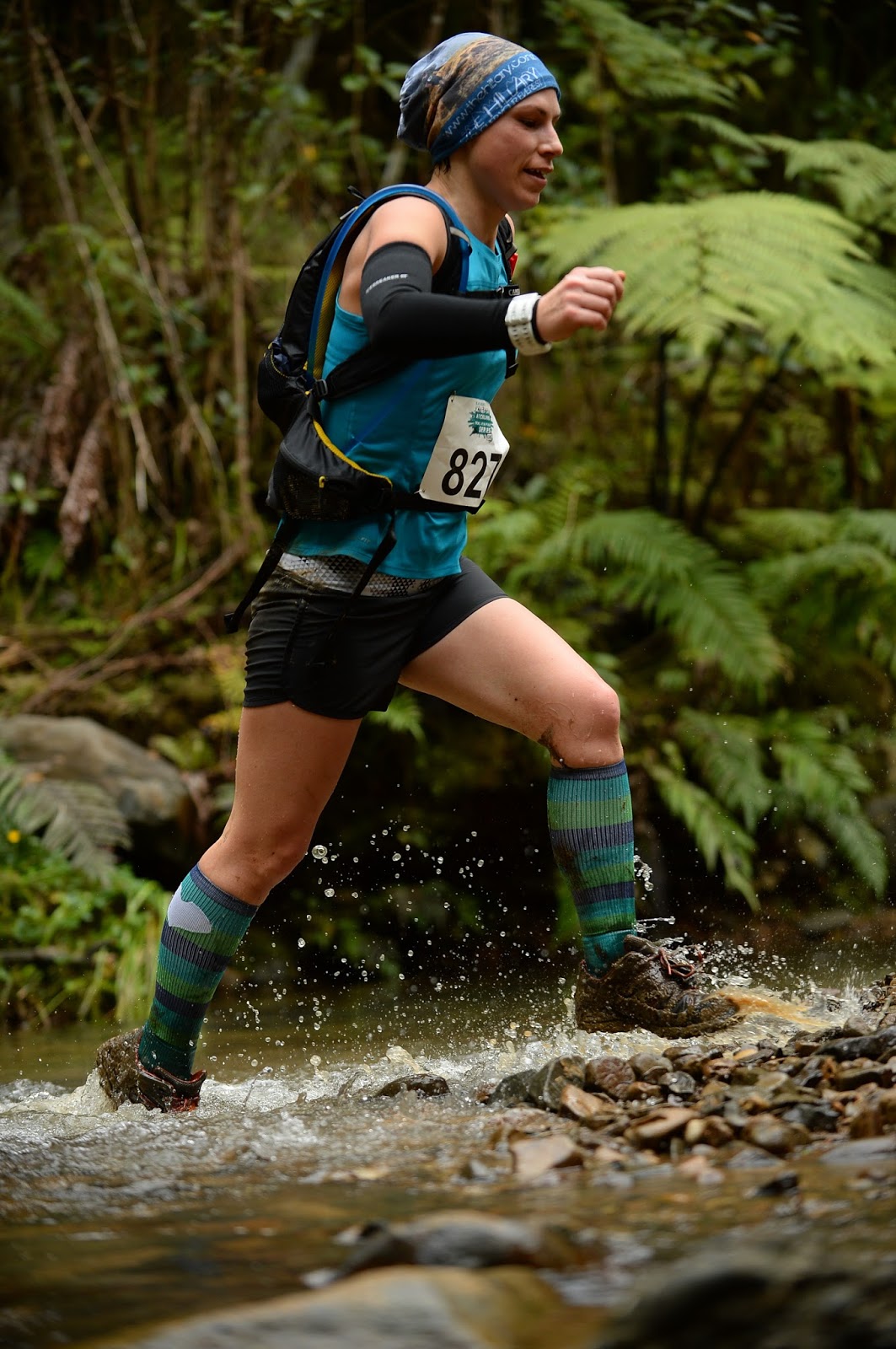 Oh well, you can't win them all.  After that, it wasn't too far to the finish line.  I heard a couple of people behind me just as we were nearing the end and I was determined not to let them pass me, so put on a tiny burst of speed to get across the line before they did.  Not that it matters ;)  I finished in 3:12:19 (84/122 overall, 18/36 women, 16/26 age category), Martin was five minutes later, and Vaughan a little while after that.  Linsday had finished her mid-course run quite a bit earlier and had kindly grabbed the boys a sausage and a beer each so they didn't miss out.  By the time we rolled in, people were packing up and getting ready to go home!  It was a tough course, no doubt about it, but it was most definitely my favourite of the series so far. 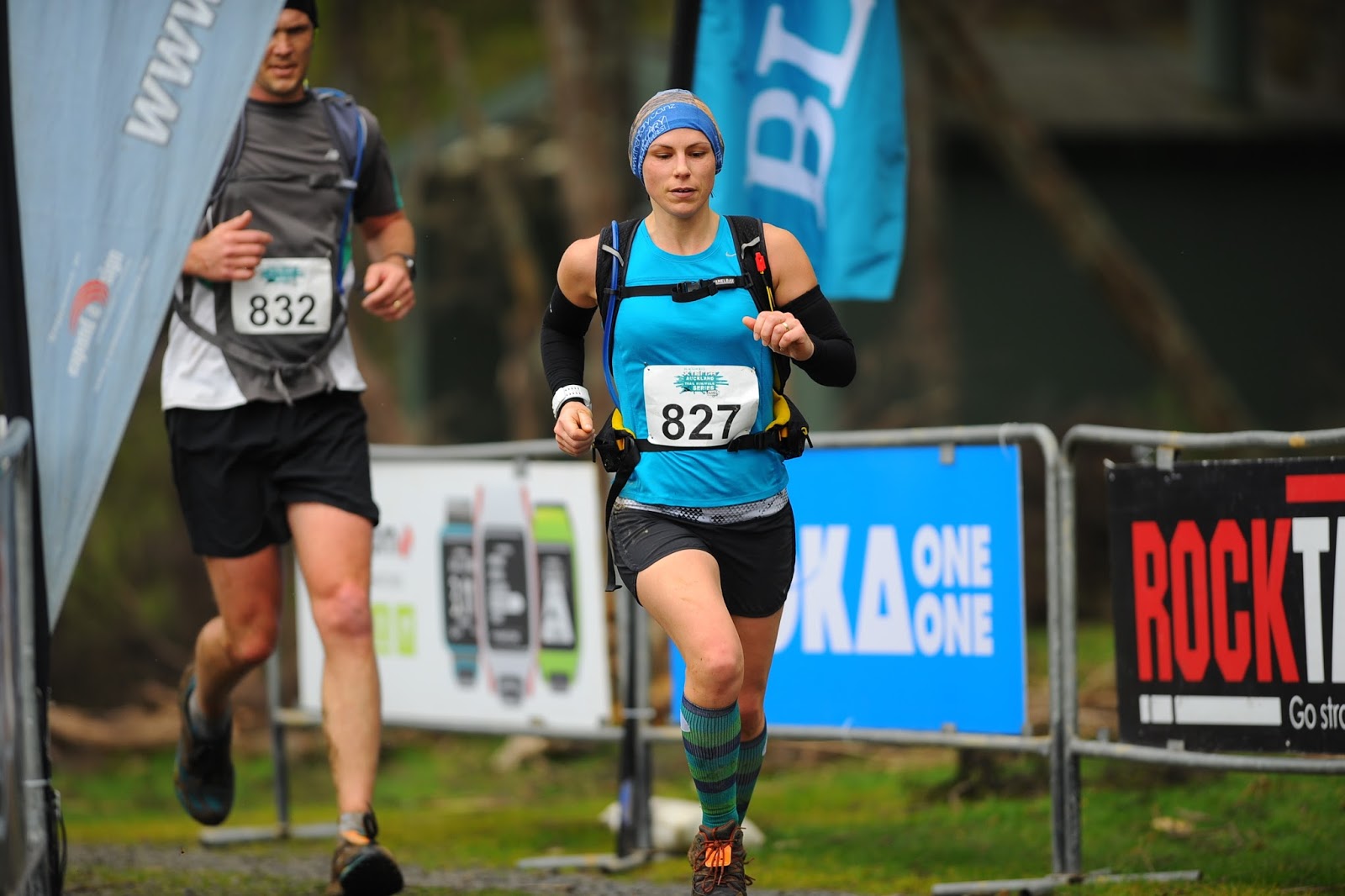 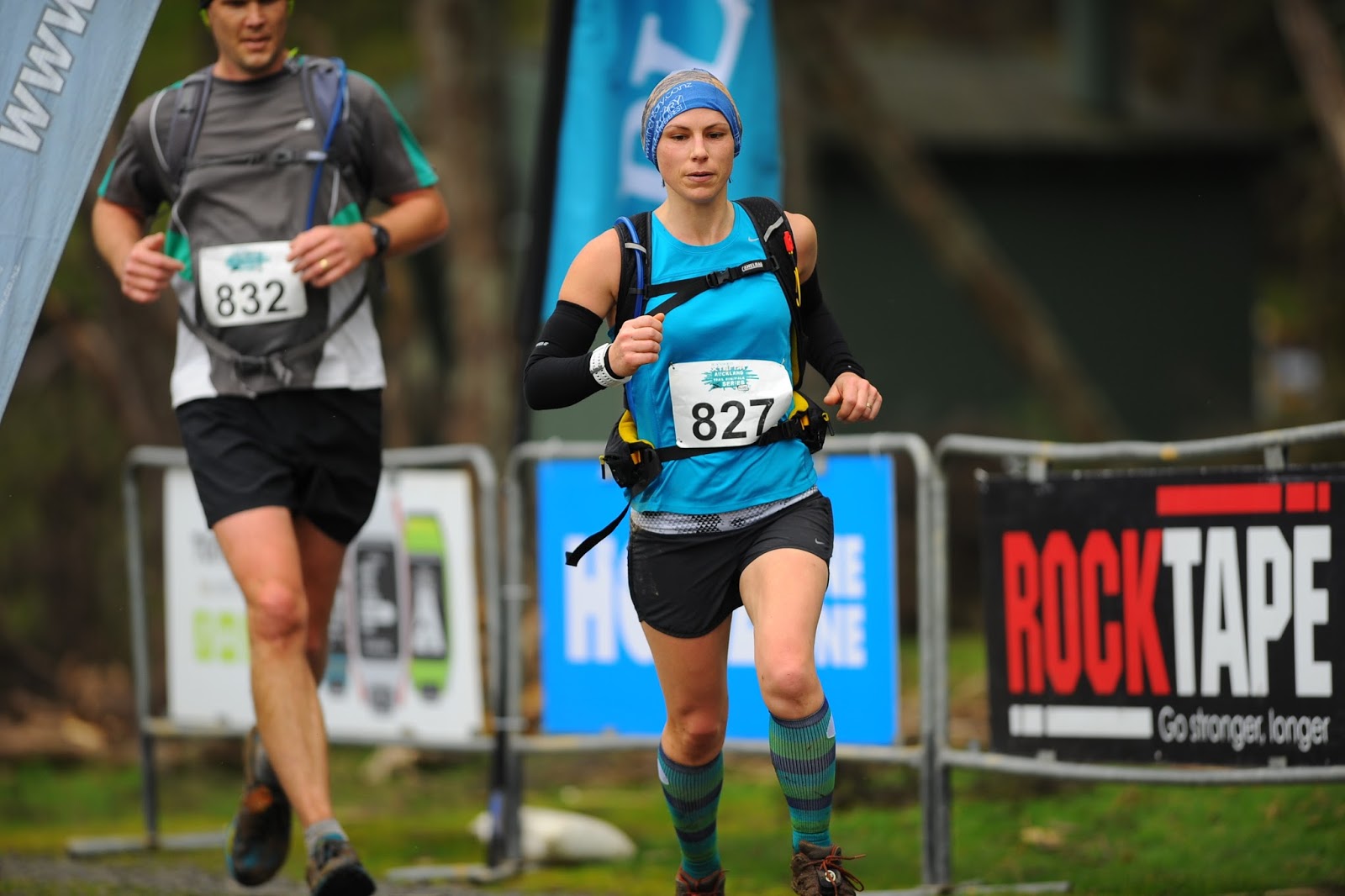 We have since been informed that the elevation gain was closer to 960m, well short of the 1,400m originally indicated.  Disappointing - here I was thinking I was totally kicking ass at the whole hill-climbing thing! Despite that, I'm still fairly confident my training is on the right track for Waihi.  I'm actually starting to look forward to it, even though the distance is still pretty scary.  Martin has a few daunting-sounding training runs planned over the next couple of weeks I think - he won't divulge details, but I reckon I can handle it ;) 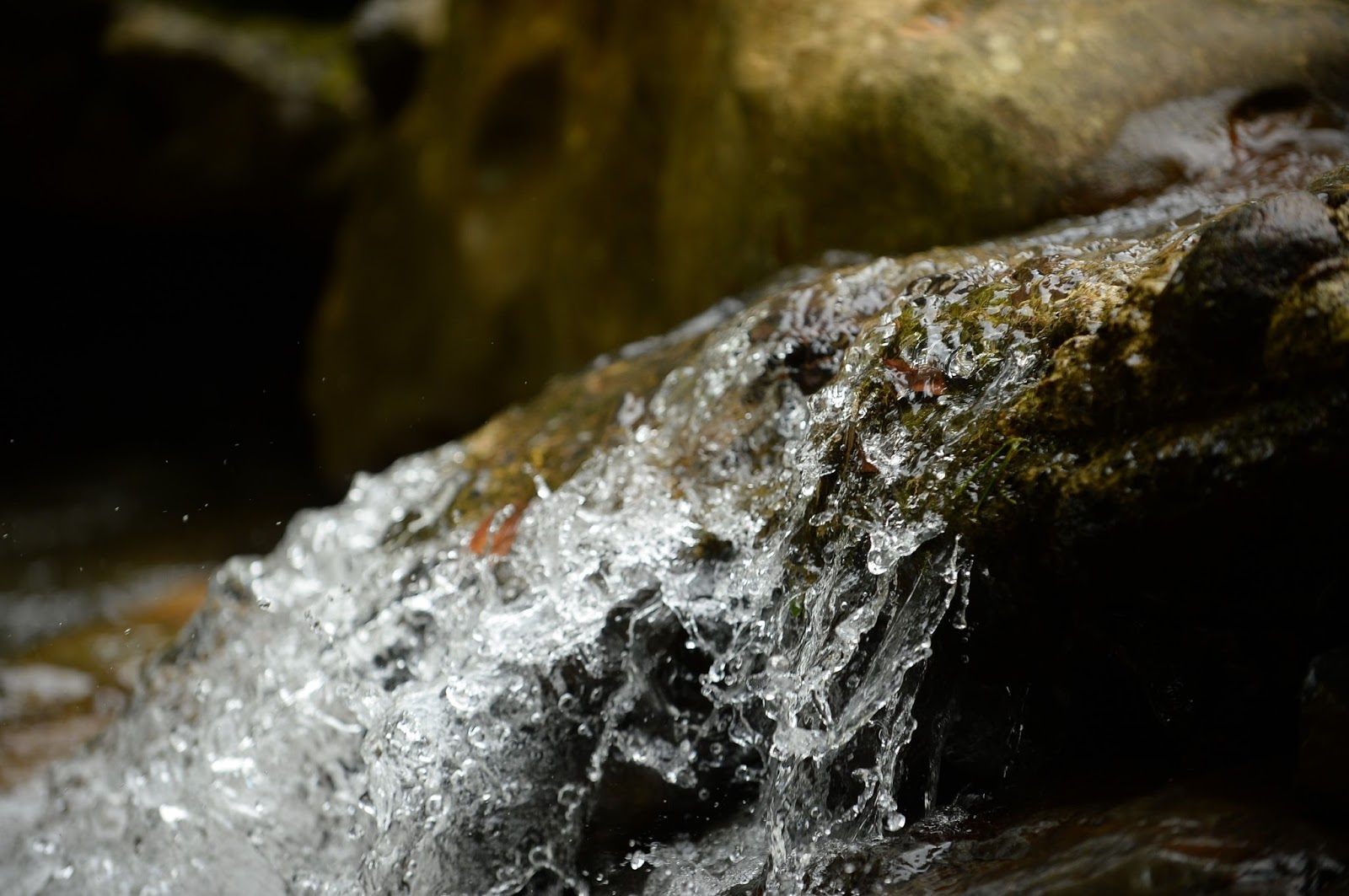 Lovely bonus pic from Allan and his team - thanks for being awesome, Photos4Sale!