Counting down the training runs...

I have now got to the point where I'm struggling to fit in all the long training runs I wanted to do.  This weekend we're planning a back-to-back (ie: two longish runs on both Saturday and Sunday).  Next weekend was supposed to be the longest training run of 35km before tapering, but it is the weekend of the last XTERRA race in the Hunua Ranges which is only going to be 22.1km - well short of the required distance!  The 35km run just won't be happening, unless I can fit it in to a weekday.  I am a little bummed about that, but am trying to remember the fact that we have managed to squeeze in two 34km runs already.  In theory, we should be good to go.  Hanging over my head is the realisation that on race day we'll be running a whole 42.2km... ::begin freak-out in 3, 2, 1...::

So I got in to the Queenstown Marathon, then discovered the cheapest flights available were about $600.  Could I honestly justify that kind of expense without feeling being completely selfish?  Hell no.  I had to send them an email to say thanks but no thanks.  I'm still really gutted that I won't get to run it - the inaugural Queenstown Marathon is starting in beautiful Arrowtown and the scenery will be a-ma-zing, and I have several friends running it this year - but there will surely be another opportunity somewhere down the track.  Maybe.  ::sob::

Training runs are getting monotonous.  Don't get me wrong, I still enjoy the surroundings, and it's always good to get outdoors and spend time running through the bush with my friend (or friends, if we have extra company), but I'm now at the point where I have to make myself run the solo runs in town or on the treadmill during the week, and to be frank, I'm a little bit over the whole mud thing.  My enthusiasm for winter runs is waning.  Sure, it's now Spring, but Spring in Auckland is always wet which means the mud isn't going to abate any time soon.  It's nice to change it up a bit every now and then, but lately every trail run involves copious amounts of mud so it isn't really much of a change, y'know?  Add to this the fact that Martin and I seem to keep heading off the official Hillary Trail into sections of the Waitakeres that are lesser-used and riddled with overgrown sections or fallen trees that require climbing skills, and every run is a physical and mental challenge.

I will admit I rather enjoyed the early Thursday morning run through some of the Central Auckland suburbs - we ran through Western Springs Park near the Auckland Zoo, and could hear Burma the elephant making a bit of a racket.  We were lucky enough to also enjoy this beautiful sunrise: 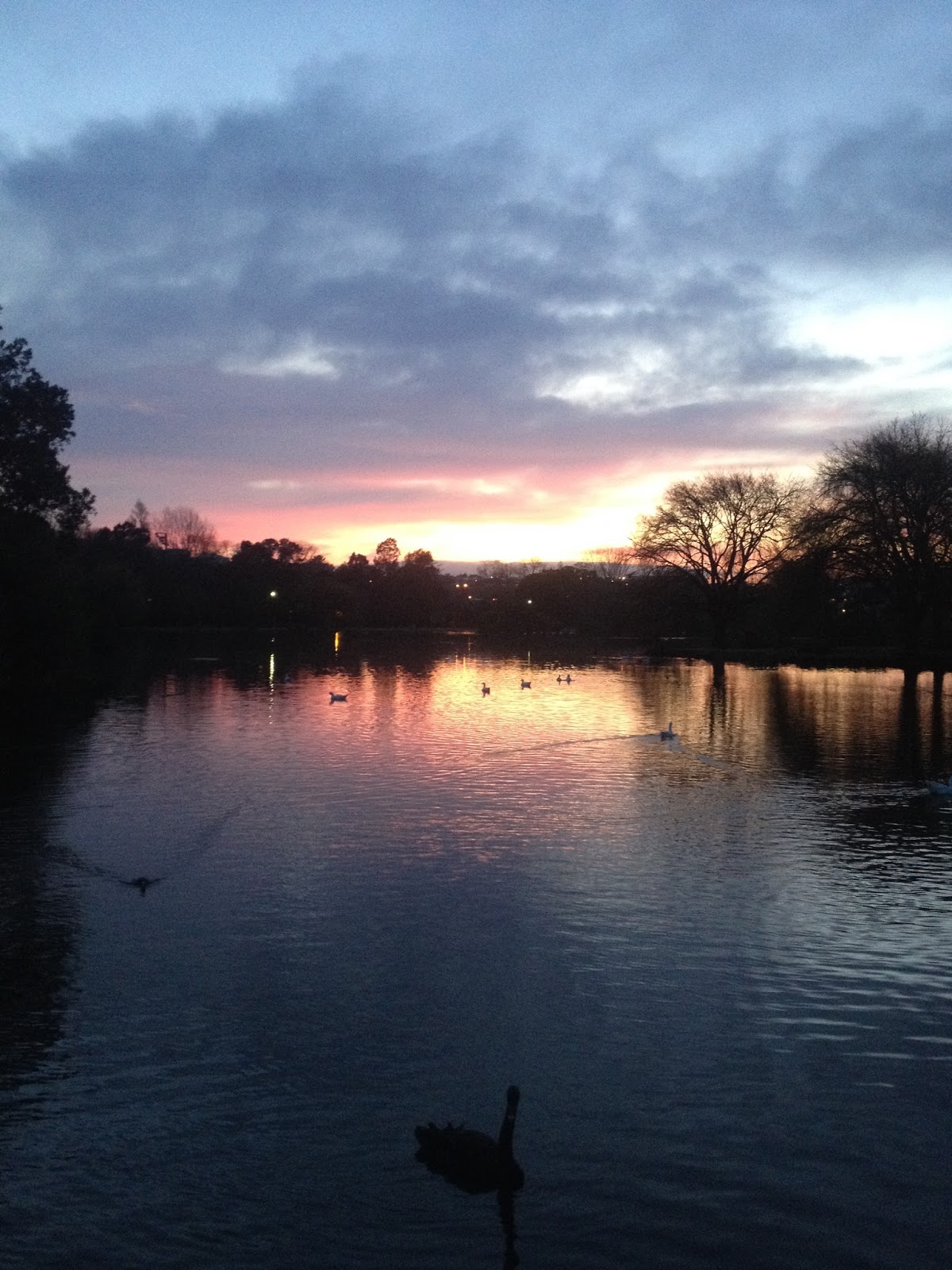 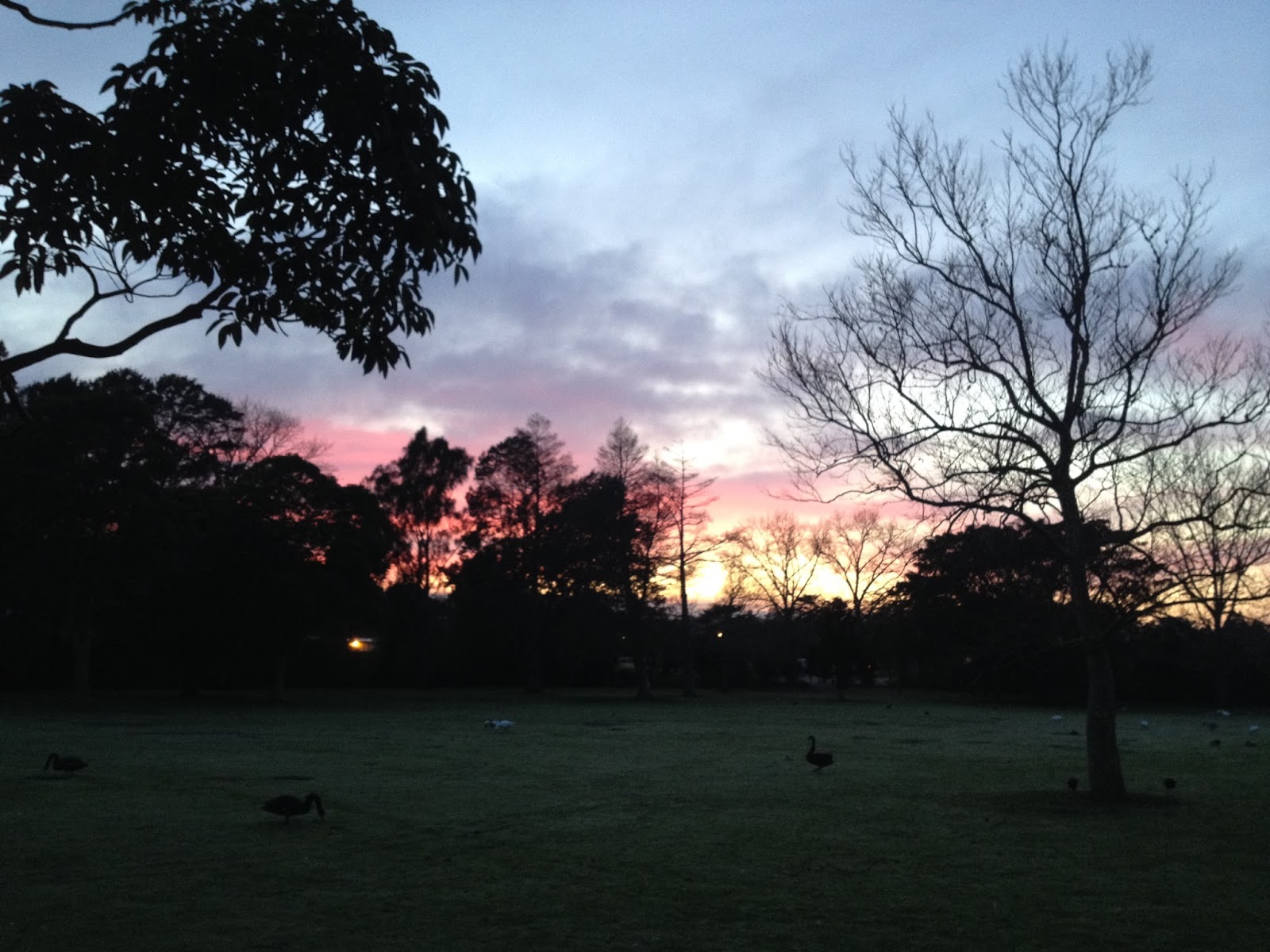 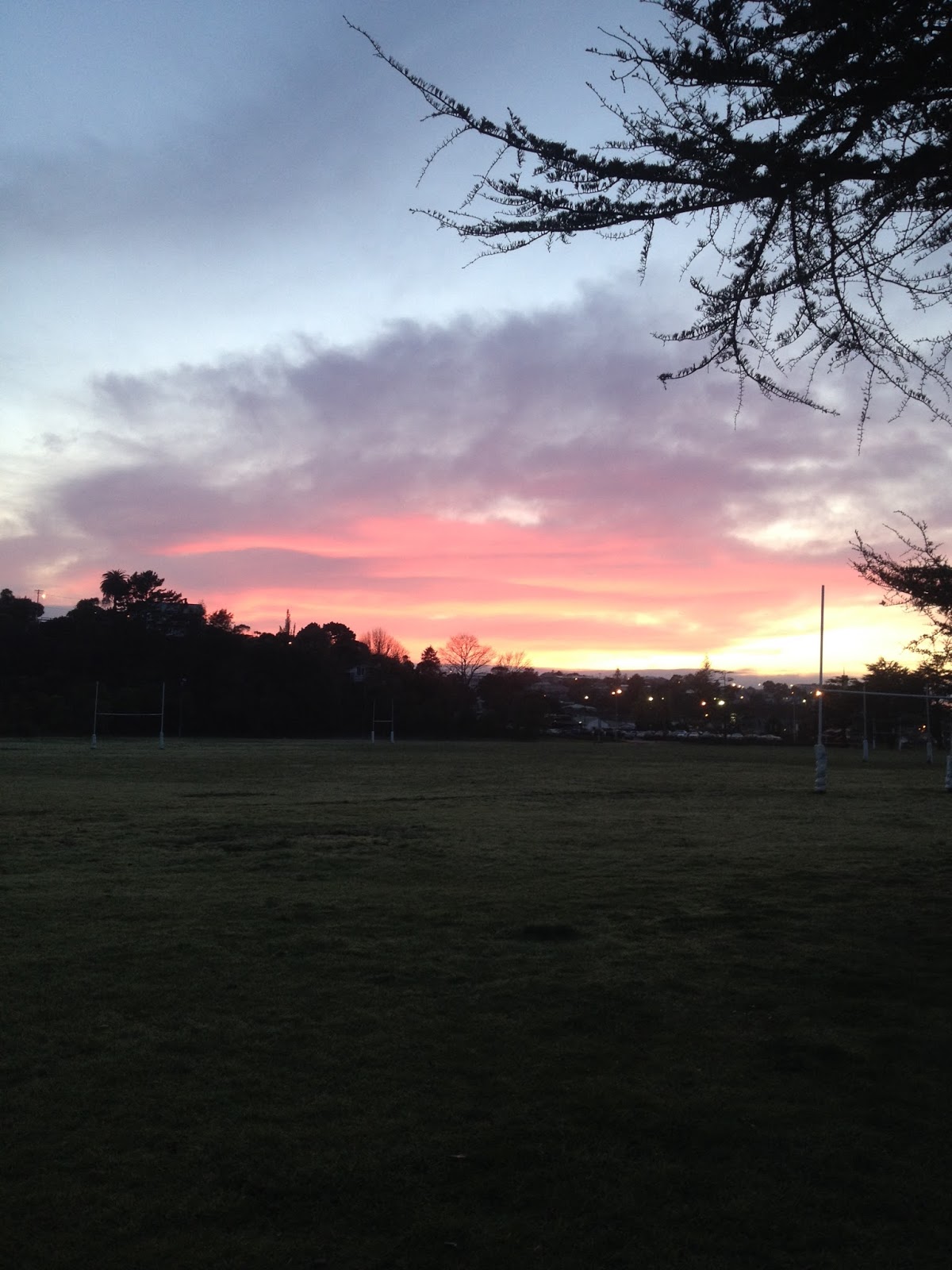 The geese, ducks and swans were lovely.  The bugs were not.  It became necessary to run close-mouthed through the park in order to avoid getting a mouthful of miniature flying creatures - there were random swarms dotted about the place and because of the low early-morning light, they weren't visible.  Ew.

Sunday's run was not quite what we had in mind.  We started a little later in the morning so I could make Deane breakfast in bed for Father's Day before heading out the door.  We had planned on replicating this run by Malcolm Law (just the distance and route, not the time!!), but found we had severely underestimated the time needed.  We ended up missing out Muir Track, Pararaha Valley Track, Buck Taylor Track and Odlin Timber Track - instead we just zipped across Walker Ridge to Orange Peel Corner.  Not only did this cut out a few kilometres, it also reduced the elevation gain by about 800m: 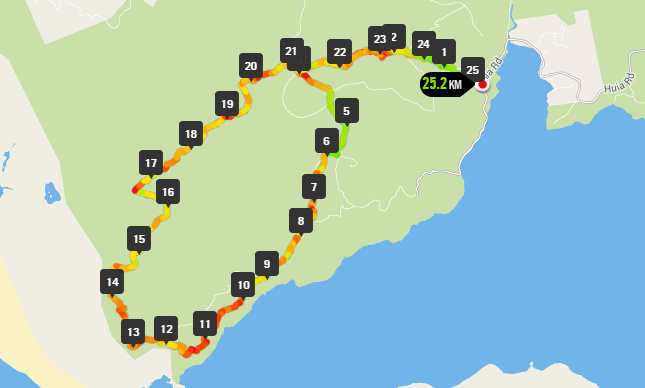 I'd told Deane to bring the boys out to meet us in Huia for ice cream after the run, estimating that we'd be done by about 3 or 3.30pm.  Pfft!!!  If we'd stuck to the original course, we'd have been lucky to have finished by 5!  With our adjusted route we finished at about 3pm so it worked out pretty well,  I was just a little disappointed about the huge drop in elevation gain.

What I was happy about though, was getting to tackle the Karamatura and Omanawanui Tracks that well and truly kicked my butt last summer!  (Reading back through that, I'm not entirely sure I got the order of the tracks right.  Oh well.  Hooray for topomap!)

Here are some pics from the run: 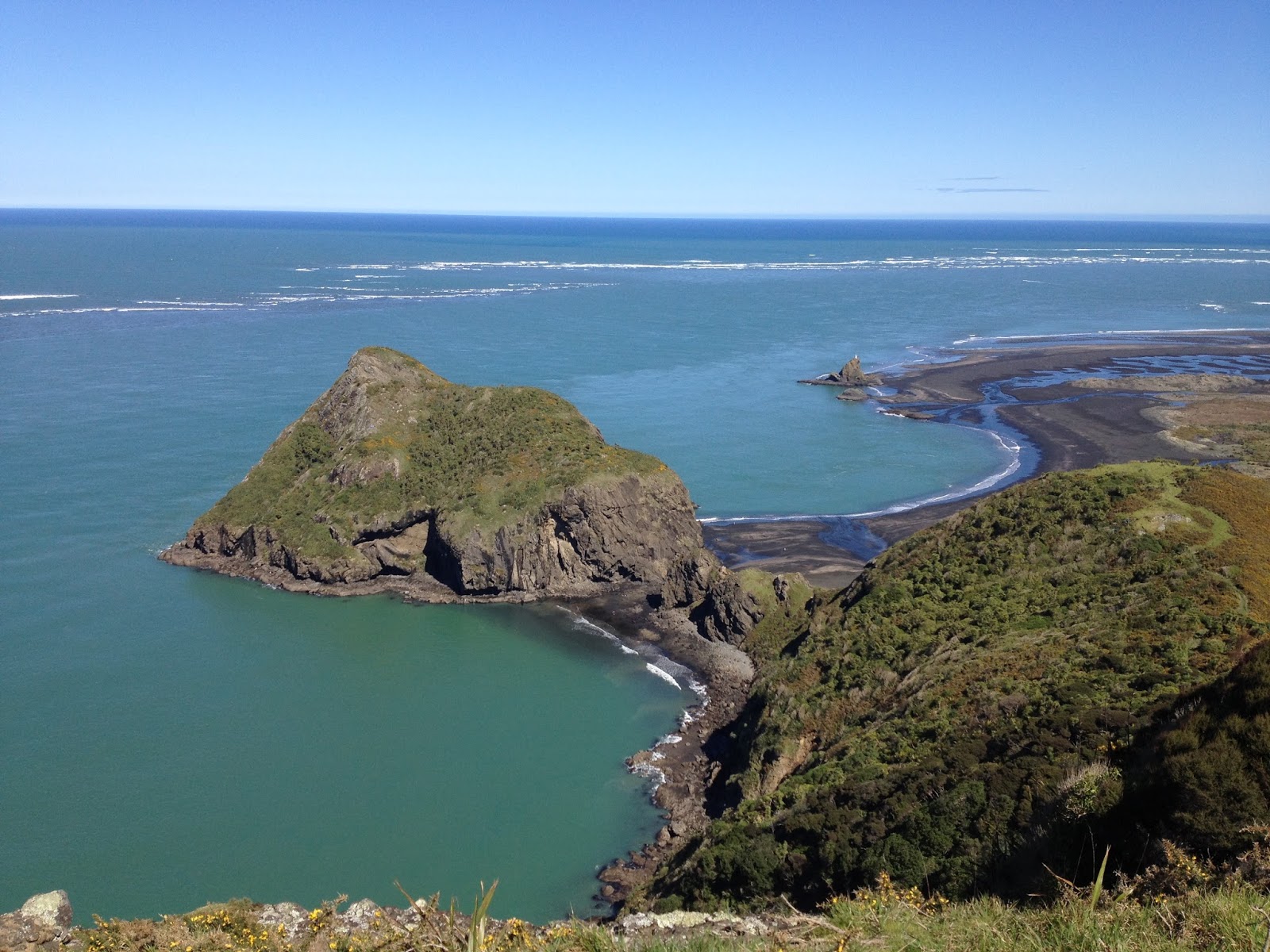 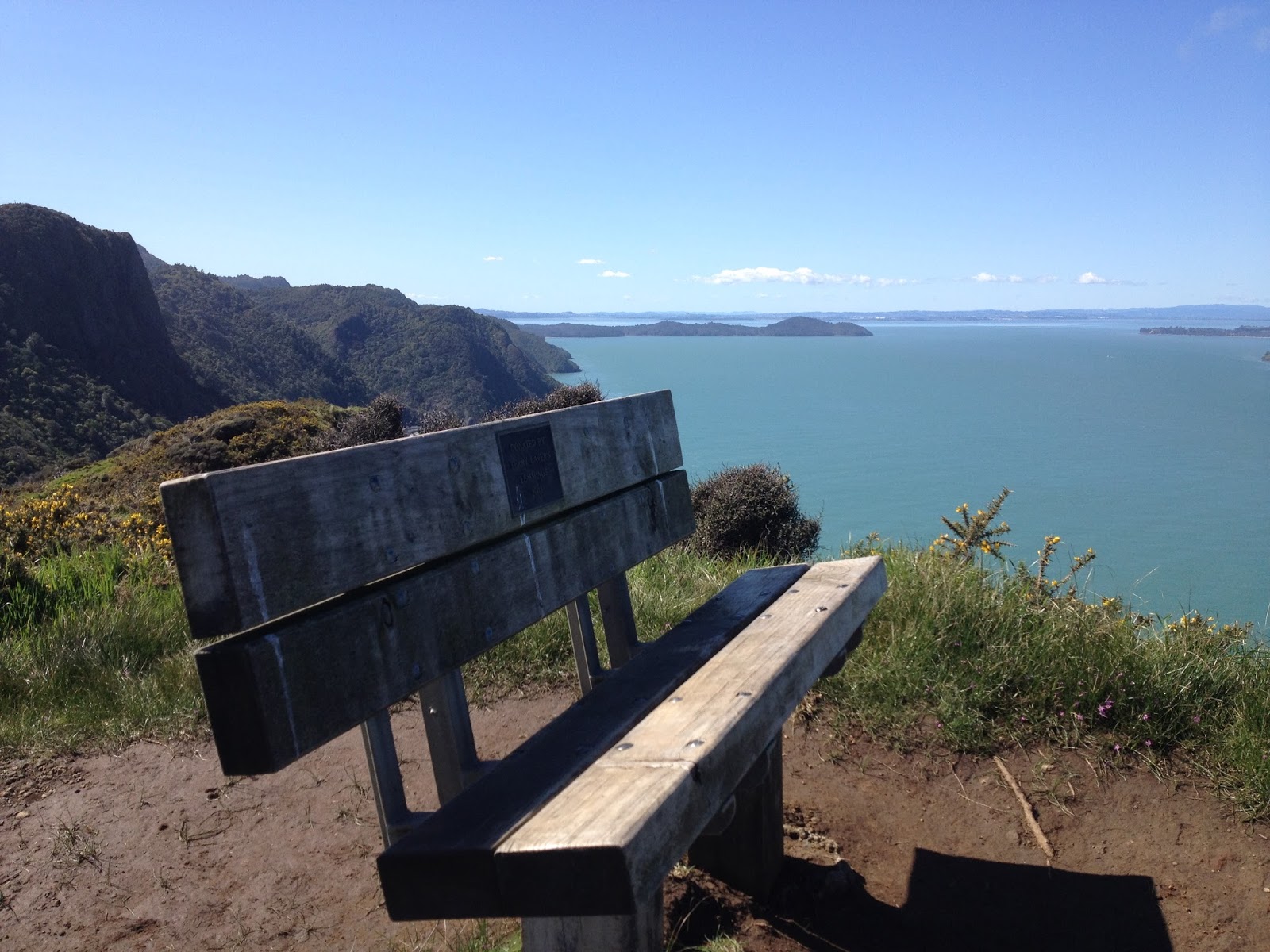 The resting spot, looking back towards Cornwallis 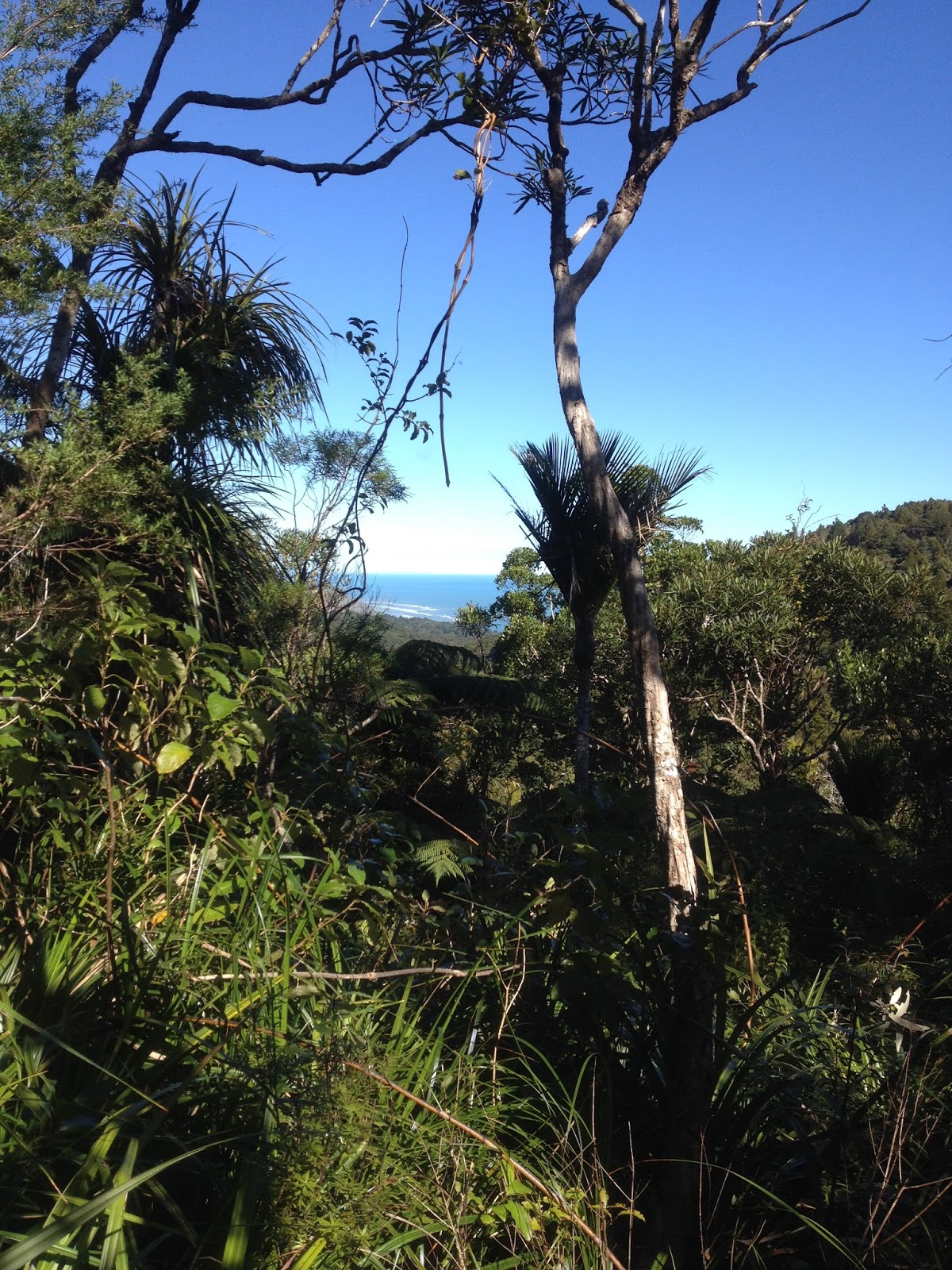 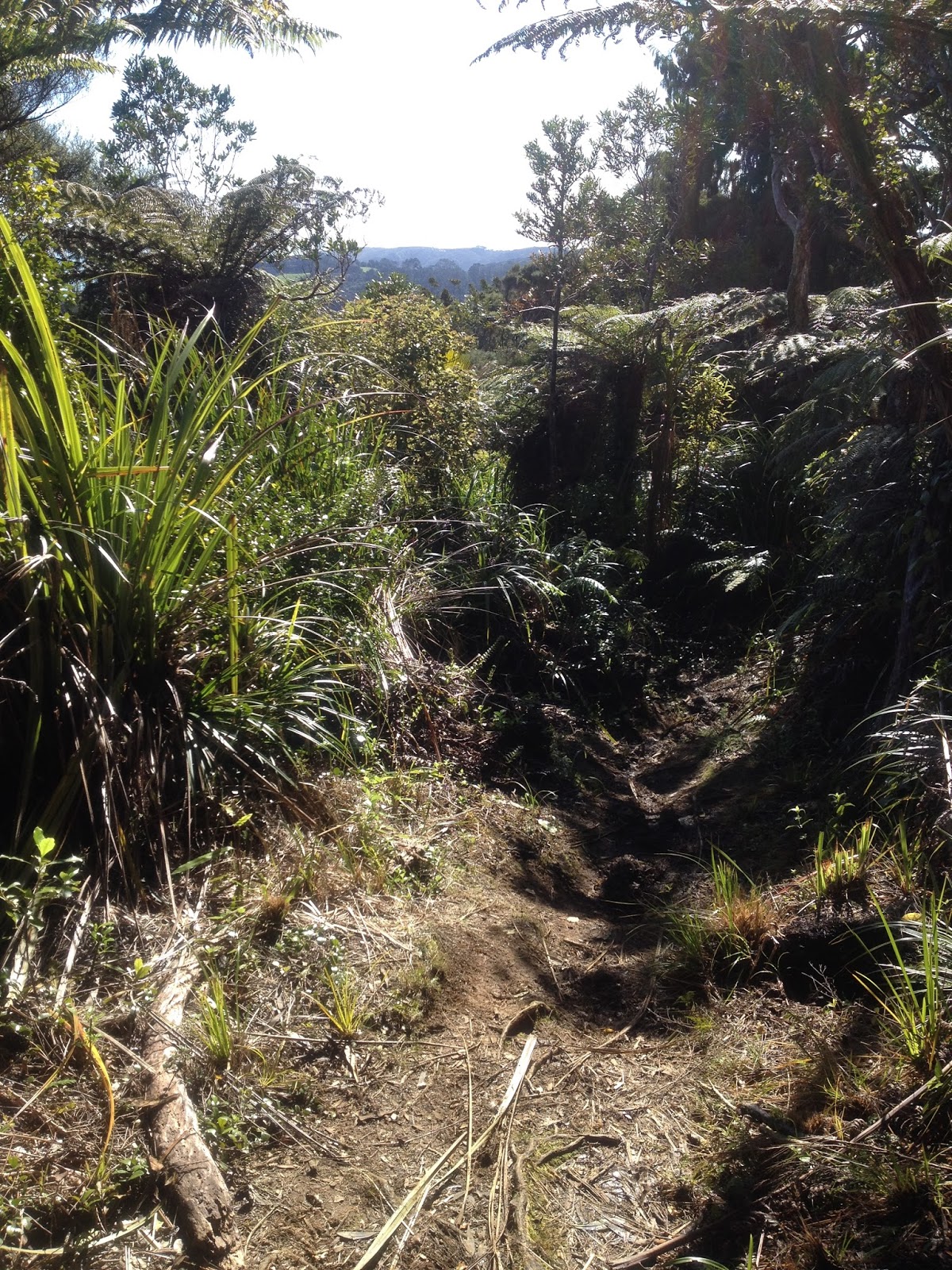 This was part of Walker Ridge, looking a little overgrown 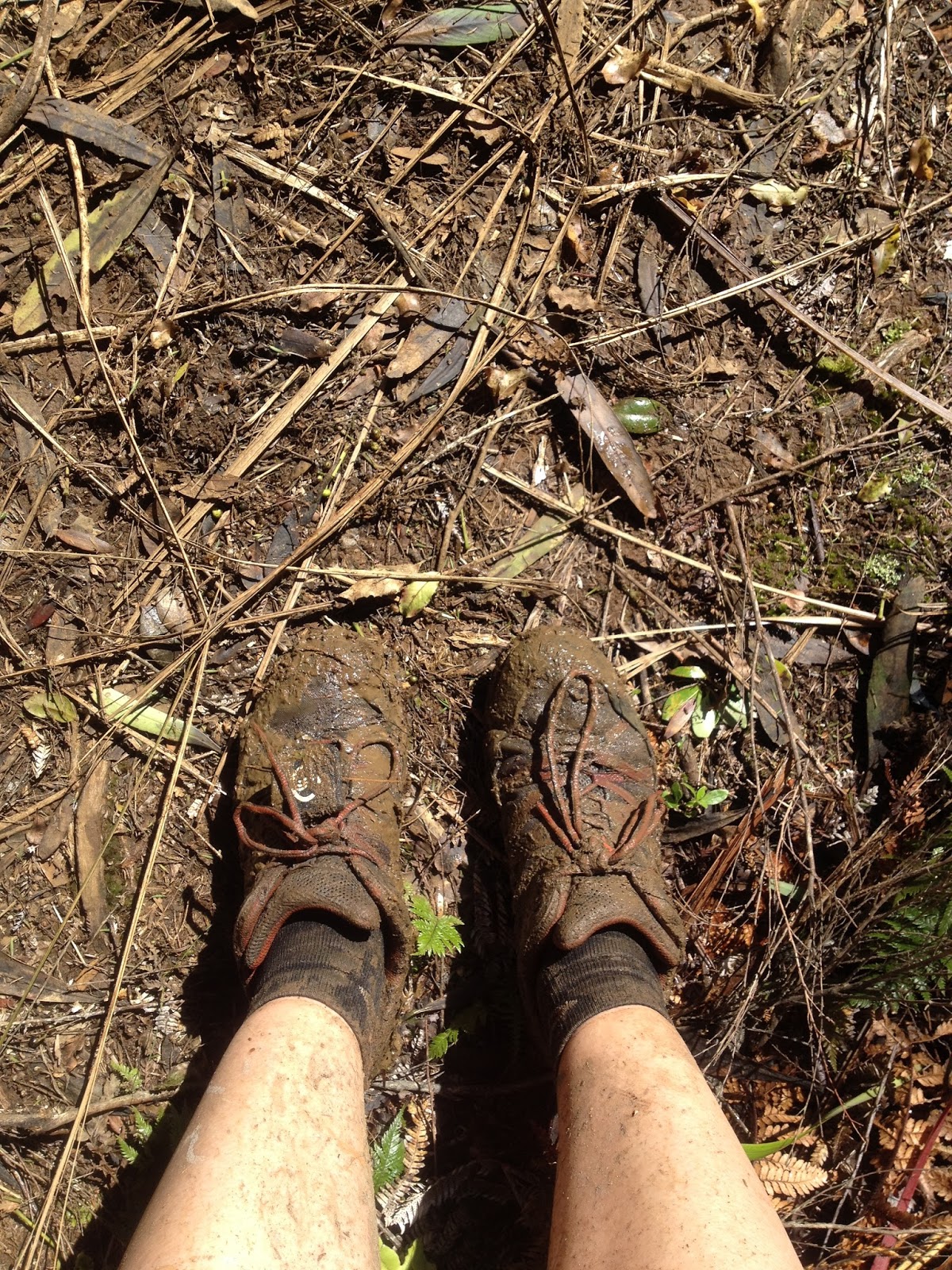 Did I mention it was a little muddy?  You should've seen my legs at the end!! 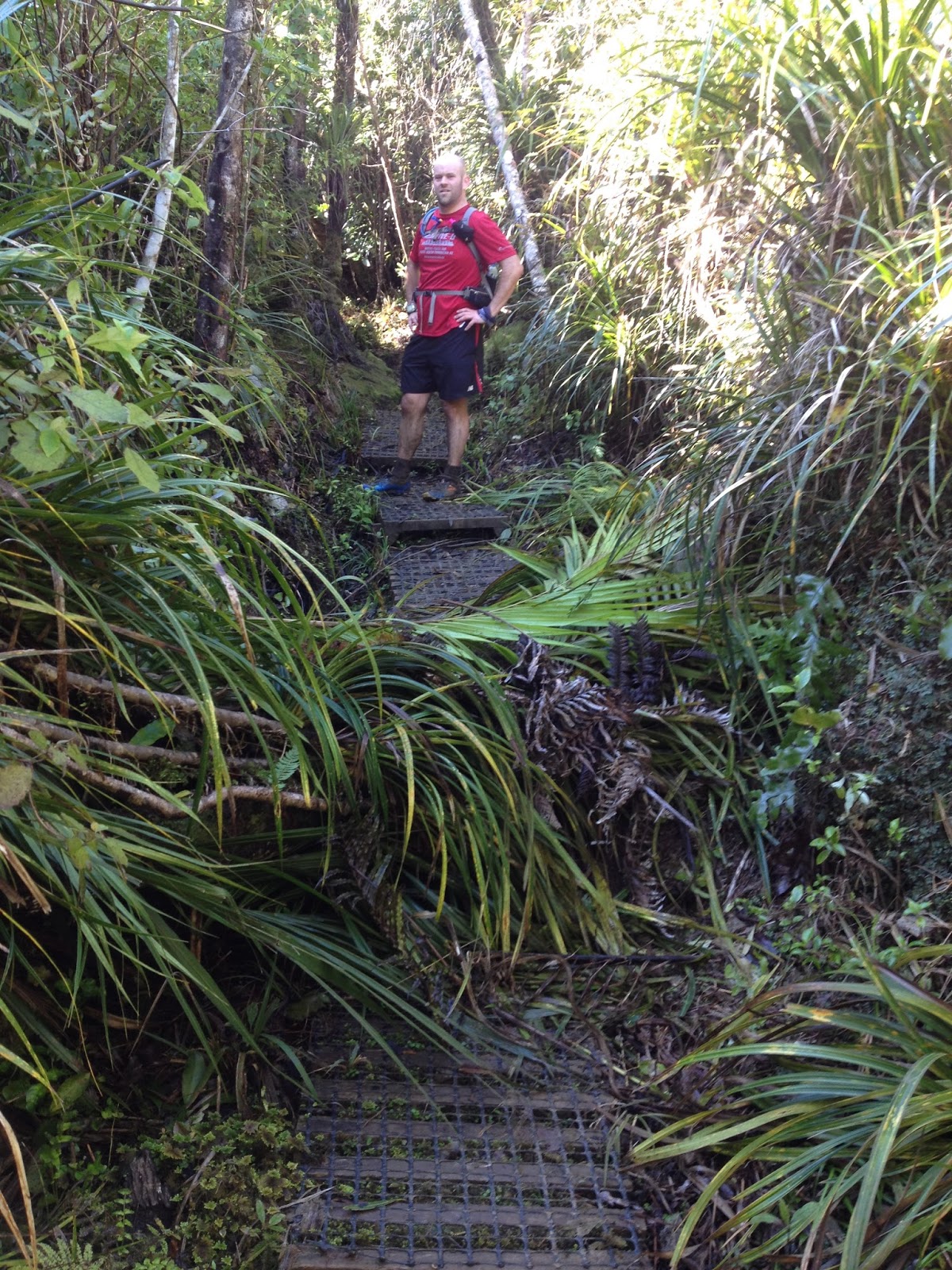 This was about the billionth tree we had to climb over.

I had joked on the way up Karamatura, because it was quite warm, that the trail had something against me and was trying to do me in.  It was the warmest day we'd had in a while and was quite humid - last time I'd run it, it had been the hottest day of the summer so far.  Somewhere mid-run I was saying how surprised I was that I hadn't yet face-planted on a trail run.  Usually I manage to keep my balance pretty well, and often don't even have to put my hands down to stop my fall.  I did at least put in that there's always a first time for everything, but you know what they say - pride cometh before the fall...  Later, on the way back down Karamatura when we were nearing the end of the run I stepped on a tree root that was incredibly slippery.  I couldn't stop my trajectory and ended up tumbling all the way over, narrowly missing a complete face-in-the-mud fall.  I ended up with my butt in the air and minor grazes down my legs.  Thankful that I had finally got that 'first' out of the way, I laughed my ass off about it for a while, convinced that it would've been quite comical to observe and lamenting the fact that we didn't have action replay.  Then I tripped again.  And again.  At this stage I was starting to get angry, and was absolutely convinced that Karamatura hated me and was pissed off that I had managed the ascent without nearly dying this time around.  Well take that Karamatura, I shake my fist in your general direction!!

We ended the day by getting ice creams at Huia Foodstore, cleaning up the chocolate ice cream vomit that T sprayed the car with on the windy trip back home (thankfully we had a full packet of wipes in the car!  Note to self: do not feed motion-sickness-prone children large ice creams before embarking on road trips with many corners and hills), and watching Star Wars while eating Indian takeaways for dinner.  Not a bad day all up.  Probably not quite the Father's Day Deane had in mind, but then, I'm still waiting for my Mother's Day present... ;)  It's all a bit of give and take, amiright?
Posted by kreachr at 18:51