How are you supposed to feel after you achieve something you've been working towards for weeks?  Months?  Years, even?

What do you do once you've accomplished a life goal?

So far, this week has very much been a case of putting my feet up. 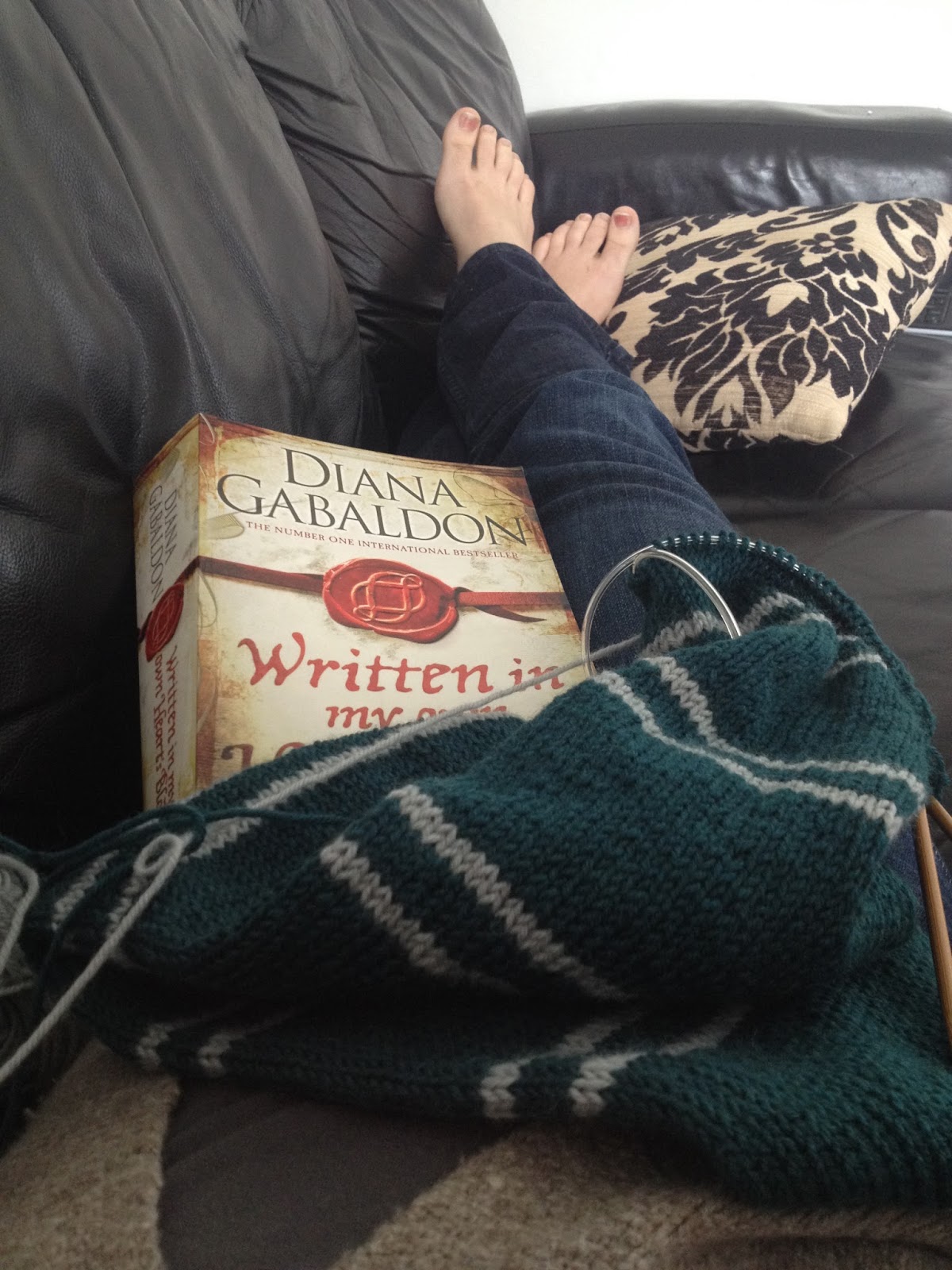 Today's view, from one end of the couch to the other.  So lazy.

I pretty much read that whole novel this week.  It's a big 'un.  And, as always, it was amazeballs - Diana Gabaldon sure knows how to write.  I blubbered like a complete spaz numerous times, especially at the end.  God, when did I turn into such a girl?  ::horrified::

I have still worked on my assignments because they're due in two weeks and nobody else is going to do them for me.  Believe me, I considered just not doing them and still getting a passing grade, but that thought was very fleeting.  I couldn't live with that level of laziness.  Plus I've become accustomed to achieving B+ or higher - a C-grade paper just wouldn't fly.  And I know that I'm taking a study break at the end of this trimester so there's really no excuse to be slack about it now.  But I haven't really done anything else.  Cooking was minimal with Deane and X away at school camp for most of the week.  T eats a limited range of foods so he was easy to feed, and I mostly ate salad or cereal or whatever.  My fitbit stats are looking pretty sloppy - I've only done about 42,000 steps over the week.  Pathetic effort.  I haven't done my housework.  Not complaining about that, just quietly...  I've got to the point where I'm scared to even look at my garden for fear it will try to attack me.  Side note: anybody know a gardener-type person that would be willing to put in a couple hours a month in exchange for food or knitted items?  Worth a try.  I really, really hate gardening...

True to my word, and sticking to all those post-marathon recommendations, I haven't run a step.  Well, that's a lie.  I jogged across a road.  For like, three seconds.  But other than that, no running at all.  I've been thinking about it a lot though.  Several times a day.  I haven't been this inactive in years.  It's... unsettling...  I'm trying to hold off until I've finished the assignments, although I'm starting to wonder why.  Or indeed, if I can.  Surely, I could sneak out for an early morning run before everyone got up, without it affecting study time?  I'm pretty sure I'm fully recovered from last weekend unless you count a couple of black toenails.  And really, who would be silly enough to wait for those to heal?  You'd be waiting for months...  I'm seriously considering a long run next weekend, but have to choose between Waitakeres with Richard (hard work, lots of hills) or Beachlands with Rob (easier terrain, but probably longer distance).  I can't decide :(

It's weird.  I don't feel any different for having run a marathon.  Not just a marathon, a bloody hard trail marathon with over 1,800m elevation gain.  I kind of thought I would.  I guess it's the same as not feeling any older the day of your birthday.  I don't feel any different now that I'm 35 either.  I have my race number stuck on the fridge, and my medals hanging on the bookshelf in the lounge.  I like seeing them there, reminding me that I have actually done something I set out to do a year or two ago and have been working towards for some time.  I quite distinctly remember thinking numerous times during the run that I wouldn't be able to do it, and I was never going to do anything this crazy and ridiculous ever again.  But I got there by just putting one foot in front of the other and trying to quiet the negative thoughts, and when it was over I actually felt pretty good.  Now, I know I can do it again if I want.  It's nice to know all those motivational quotes you see everywhere aren't just a complete load of bollocks ;)  I probably need to spend less time on Pinterest though... 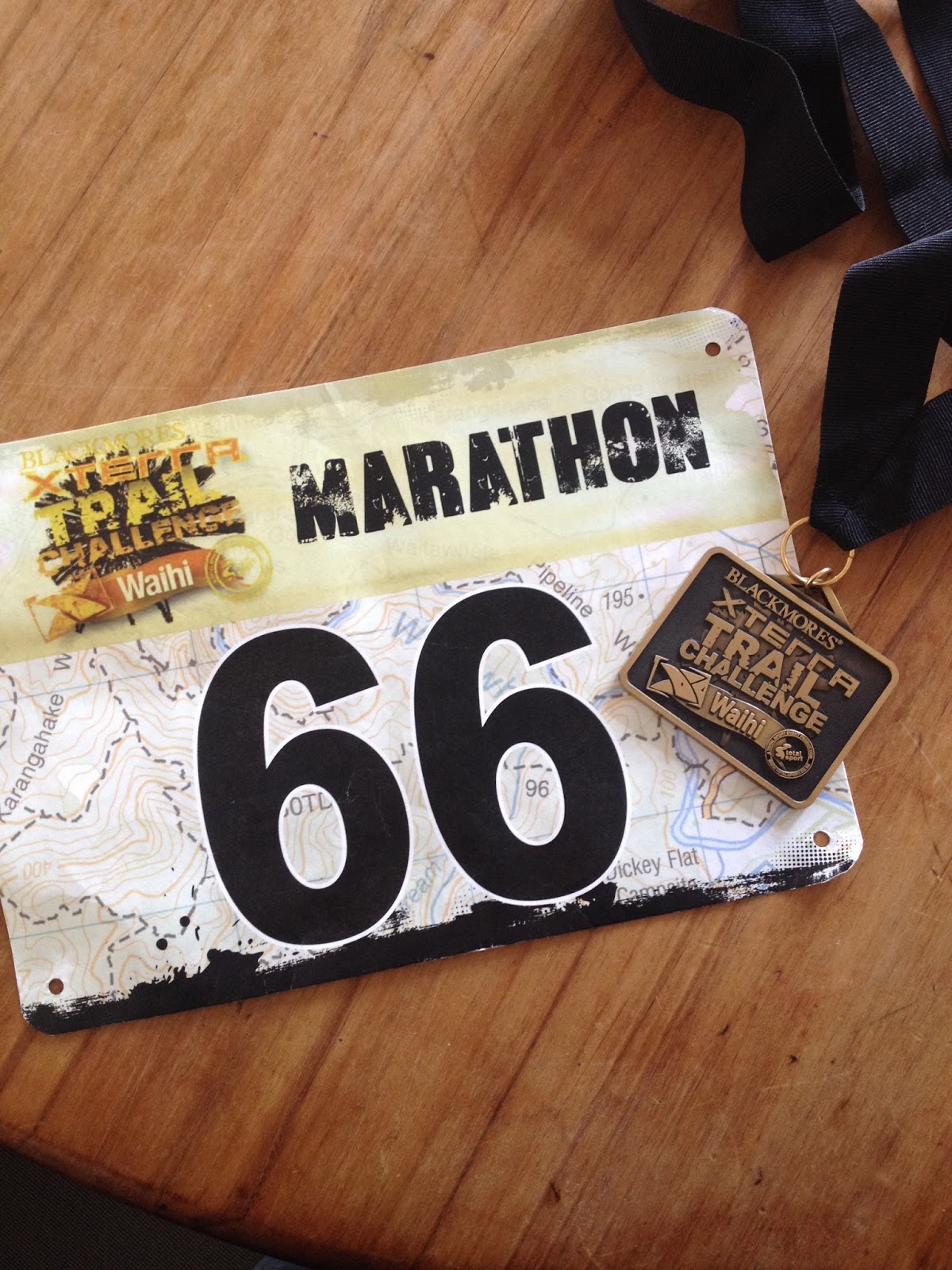 One thing that is different is that I am perfectly content to drink alcohol again, knowing it won't affect my training.  I've consumed more wine in the past week than in the last six months combined.  Although just between you and me, I don't really drink a lot, so that's still not very much ;)

Longer term, I have plans for running the Coastesville Classic half marathon again next year, perhaps the Tussock Traverse 26km, and The Hillary 34km.  I'd like Deane and the boys to run the 5km Colour Run with me - I think they'd enjoy it, and the point of that event isn't to run fast, it's to take your time and get as colourful as you can.  Other than that, I'd like to run a road marathon at some point.  Road running and trail running are vastly different, so it'd be good to do one of each.  Trail marathons take longer, have waaaaay more hills, and are pretty rugged, but road marathons are tough too because you're running faster and don't have as many walking breaks.  Also, there are people around watching you walk run.  It's a whole different ball game.

I can't call myself a marathon runner yet, but I'd like to be able to.  Of course, I have to actually run a marathon first.  A road marathon, I mean.  Call me bonkers, but I almost feel as though a trail marathon doesn't really count as 'a Marathon'.  It's hard to explain...

It may be the inactivity driving me a little loopy, but I'm starting to think that running a road marathon and a trail marathon once a year isn't such a bad idea...

Just thought I'd leave you with this wee gem - it's eerily accurate to my usual state of being: 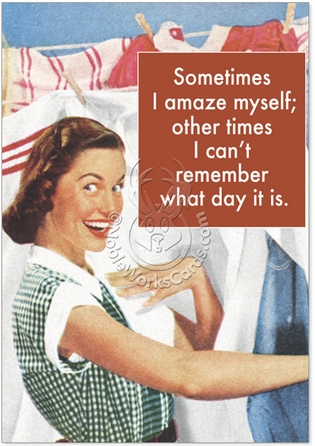 Yes, I stole the picture off a greeting card website, hence the logo.  Sorry.