Gosh, time is running away from me.  It's been nearly three weeks since my last post!  We've had a house full of visitors more often than not this month, and things have been a little cray-cray in the house of kreachr.  So let's catch up, shall we?

The Hillary 34km
I survived!  Obvs... It was a long day, let me tell ya.  I woke up at 6am, and didn't get back to bed until well after 11pm.  I was tired.  We started off at Piha Beach at a little after 10am, and it was already a hot day.  The first half of the race I was feeling really good, and made good time to Bethells, about 2 hours 34 minutes.  I found 'the W' much more challenging than I remembered it being though.  I put it down to my lack of training and reduced fitness level.  On the flats and downhills I still felt pretty good, although my quads were feeling a little rubbery from the steep descents.  I didn't stop long at the aid station as I had plenty of water and food on board - I just grabbed some water and kept going.  Then it was off up the hill again and about 2km later I was flagging.  It was a really hot day, but I was starting to feel cold.  I had something to eat and kept pressing on, putting the weird feeling down to maybe needing to pee.

At the 20km mark, I hit a wall.  I stopped on the side of the trail, dropped my pack, and stood around trying to decide what to do.  I was spent.  After standing around like a complete twit for several minutes, watching a bunch of much healthier-looking people wizz past me, I snuck into a well-sheltered area and went for my second-ever trail-side toilet stop.  Then I ate some more, drank a bunch, re-donned my pack and carried on.  The next five or six kilometres was slow going, as I walked 99% of it.  I knew the dreaded 'stairs of doom' at the end of the Te Henga were coming up, and I wanted to conserve as much energy as possible.  I stopped to talk to a marshall who told me there was about seven kilometres left to go.  He assured me that once I'd reached the top of the stairs and replenished my stores at the aid station, I'd feel refreshed and ready to tackle the last section.  Damned if he wasn't right.  I managed to run a large chunk of what was left of the course, along Constable Road, Oaia Road and on to Muriwai Beach.  I did walk most of the beach section, because I really suck at running on sand and its a total energy drainer.  So I have to admit that most of the photos taken of me are walking shots.  Oops.  I did run to the finish though, because, y'know, people watching...  I finished in 5:53:50, so I achieved my goal of under six hours.  I would've been happier with something a little closer to five, but I did the best I could on the day with the high temperatures and complete lack of training, so I'm cool with it.

I only took one photo of the day, and it was of the sun going down over Muriwai just before we left. 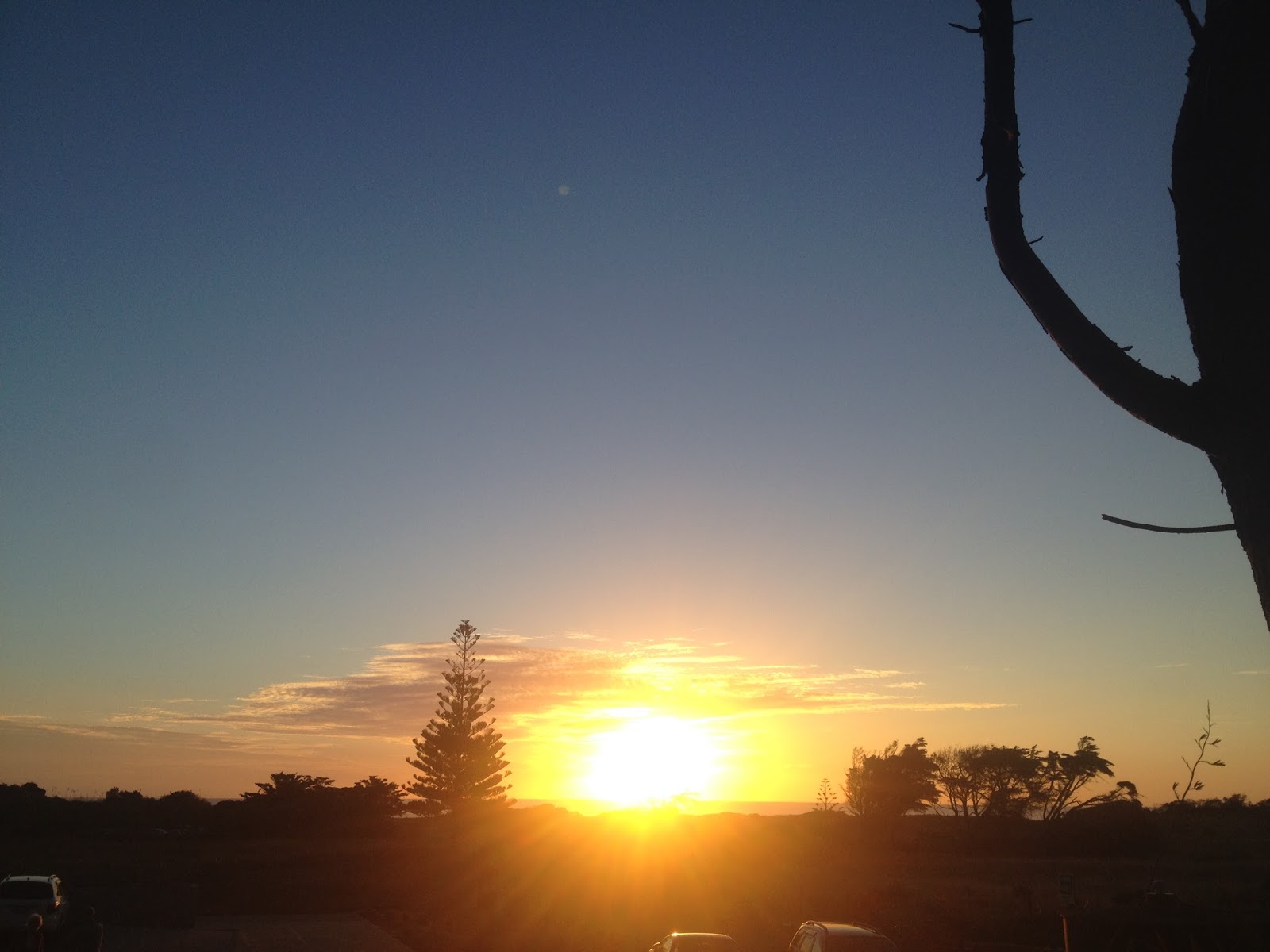 Due to unforeseen circumstances, we weren't able to leave until nearly 8pm.  Then we had to stop somewhere for dinner (because we were all starving, even after scoffing the post-event fare on offer - I only had an apple though), and go pick up Martin's car at Piha.  Town was chaotic with several events on (concert, sports game, various art events) so it took us forever to chug through it.  I was so glad to get home and have a shower!  This medal was well and truly earned, y'all: 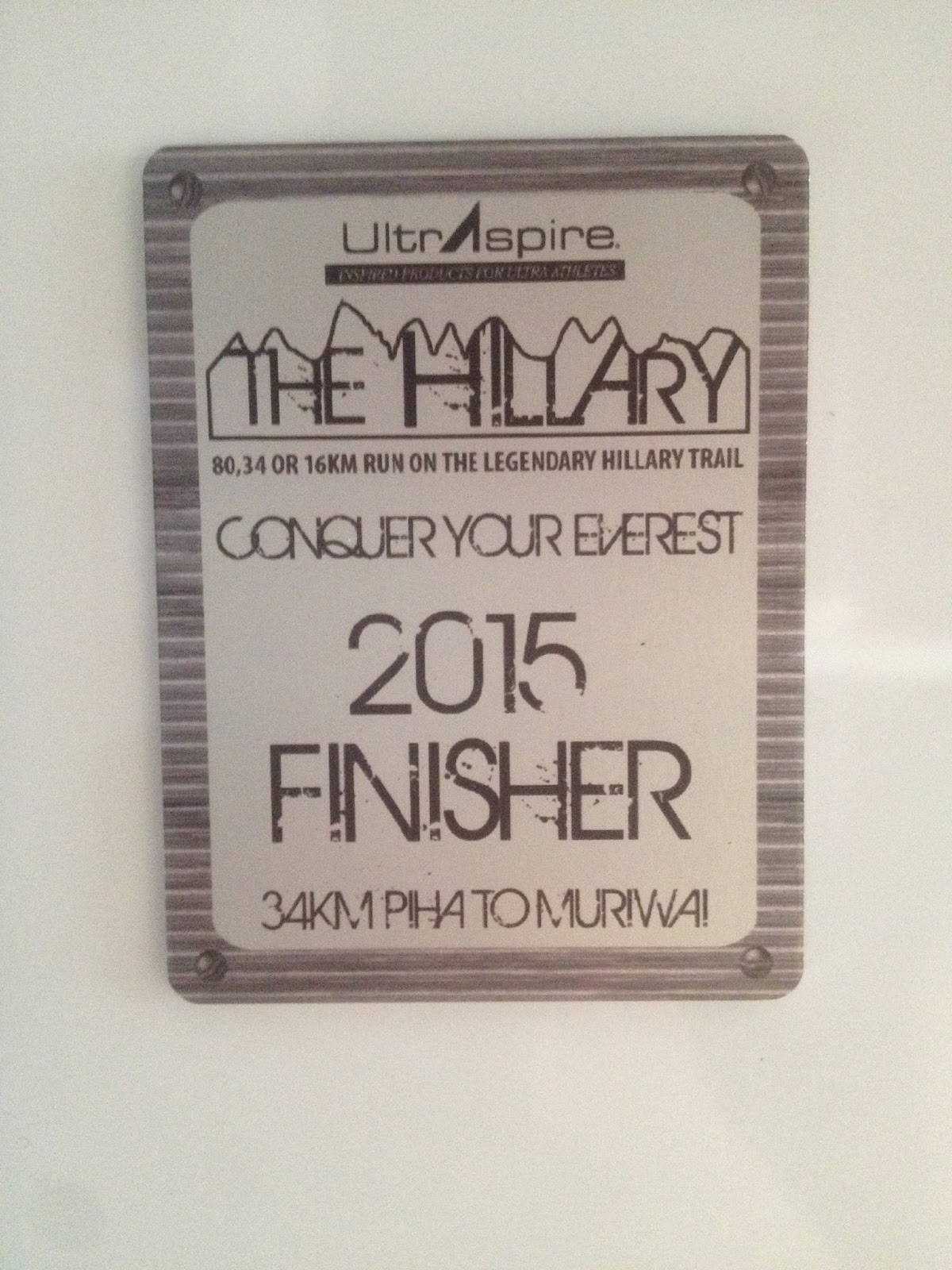 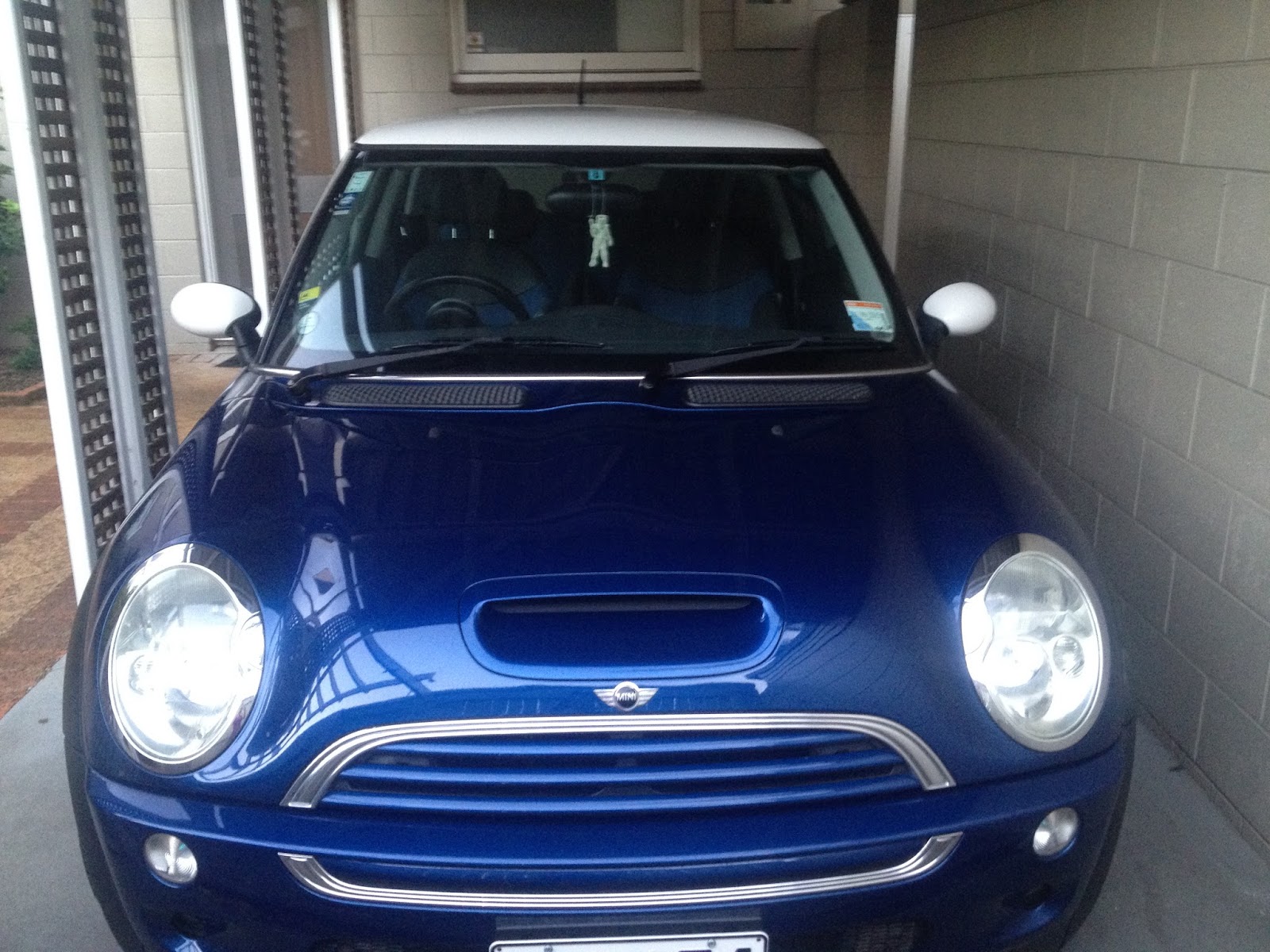 His name is Alonzo, and he is super fun to drive.  So zippy!  Sadly, Deane spends more time driving him than I do.  Sad face :(  Still, I'm putting all my little touches on him - the cyberman air freshener hanging from the rear-view mirror, I've put a squishy TARDIS on the dashboard, my music CDs, and I have my eye on the ALONZO licence plate (still available at the moment) and a TARDIS gear shift knob.  All in good time...

Study
Despite the train-station/boarding-house situation at the house of kreachr, I have managed to get my assignments written and submitted, and have stayed ahead of the ball.  I'd like to be able to enjoy Easter weekend in the Bay without having to worry about stuff like assignments, course work, kids, housework, etc etc.  I figured it made sense to stress about it unnecessarily beforehand :)

Knitting
I haven't got quite as much knitting done recently as I have in previous months, due to study and aforementioned house guests.  Still chugging along though, and all on track to get all my Twilight Movie Marathon Weekend projects finished with time to spare.  I'm currently working on some Forks socks, and have one foot left to go.  Then there's just one more pair of fingerless mitts on the list, and I'll be done.  Sooooooo looking forward to Easter weekend!!

Noms
I've been a little less inspired of late in the kitchen, and have made good use of local eateries instead.  My favourites like Little Bird and Misters (current top fave, absolutely love their menu, and cashew milk coffee!!  I have a food-crush on their brown rice porridge - food heaven), some new places like Mondays and The Raw Kitchen - I love that you can go pretty much anywhere in Auckland and find a cafe that caters to vegans.  There are so many popping up, and many more that have at least one or two vegan options on their menu (or vegetarian that is easily made vegan, usually by omitting the cheese or cream component).  I have managed to make a few healthy meals recently though, my current favourite being this butternut squash burrito bowl - sooooooo yum! 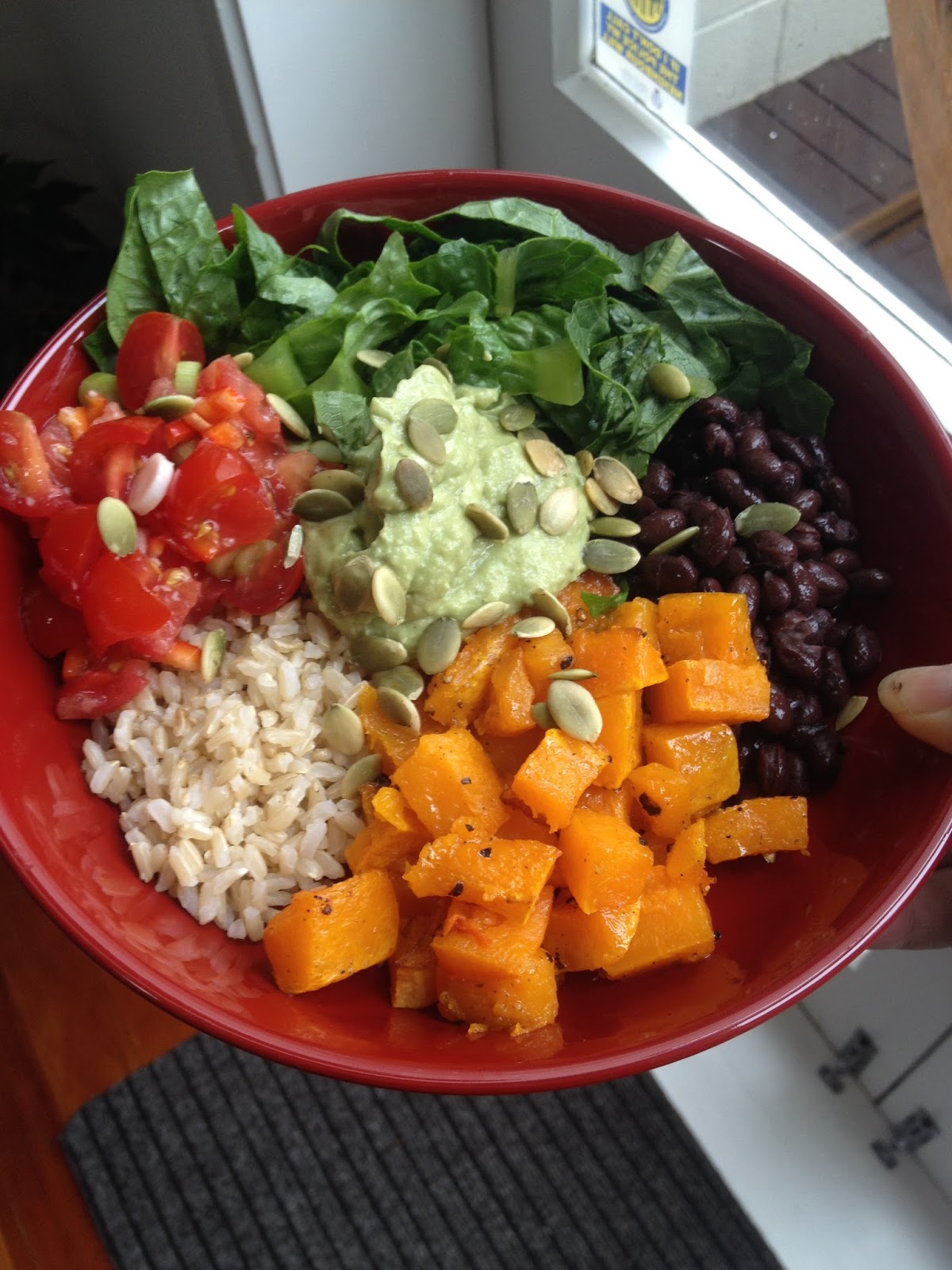 Kids
They are well and truly settled in to the school year, and are doing really well.  I don't know if they're fully aware of the fact that they only have a week left of this term :)  In any case, I'm happy with how they're going so far this year.  Long may it continue!

X is learning to skateboard, and absolutely loves his board - he paid for half with his pocket money and chose the deck, wheels, trucks, bearings and grip tape, then helped Deane put it all together.  He always gives us an update on the tricks he's learning, and all the scrapes and bruises that go with it.  Fun times.

T loves the teacher he has this year, and she's really good with him.  It's a good combination.  He has camp next term - I wonder if Deane or I will go along...?

Okay y'all, I have errands to run, appointments to keep, and a house to clean.  This Saturday I'm the support person for my friend Martin, who will be running The Dual off-road marathon for his third day in a row as a support runner for Mal Law, doing the High Five-0 Challenge to raise money for the Mental Health Foundation of New Zealand.  Today (day 48) they're running 46km in the Waitakeres, tomorrow (day 49) it's 48km from Piha to the Auckland Ferry Terminal, stopping past the highest point in the Waitakere Ranges.  Then (day 50) The Dual.  Mal and his team have raised over $415,000 so far, surpassing his original goal of $250,000.  They're now aiming for $505,050 - feel free to donate here - it's a good cause!  Or you can text GOMAL to 2446 to donate $3.  Go on, you know you want to ;)