I went in and had a full health check last week, with a whole raft of blood tests etc etc.  I am super ridiculously healthy!  My iron and folate levels, B12 levels, and all the other bits and pieces are perfect.  I have excellent blood pressure, and I am comfortably in the healthy weight range.  The only thing I am slightly low in is Vitamin D.  My only explanation for this could be the whole staying inside and studying/knitting, not spending as much time outside in the sunlight.  I have three tablets to take, one per month for winter, and then I should be sweet.  Vitamin D deficiency prevents your body from absorbing enough calcium, which can eventually lead to osteoporosis, or bone softening/weakening.  I have never broken a bone, so I think my bones are pretty healthy, but it's good to keep on top of these things :)

I am definitely gluten intolerant, but like many things, the level of intolerancy is a spectrum.  Mine is not severe, so I can manage it much like I do IBS - how it works best for me.  Thankfully, I don't have to cut it out of my diet completely.  I just know what will happen if I eat too much, so it's my own responsibility.

My doctor is 100% supportive of my vegan diet, and is confident that I am managing my diet well in terms of getting the right amount of nutrients (as indicated by my blood tests).  Onward with healthy, ethical, environmentally friendly eating!

Knitting the blanket is going very well - it really is quite an enjoyable knit.  I've churned through nearly four 100g skeins of Malabrigo Worsted, and am 42 rows through the large chart, with 40 to go before the border.  I expect I'll go through a few more skeins in the process!  I purchased eight, just to be sure I had more than enough.  Unfortunately, it's impossible to take a picture of a square blanket on a circular needle that isn't long enough to spread out even a quarter of the blanket, so the only picture I can offer you of my progress is this: 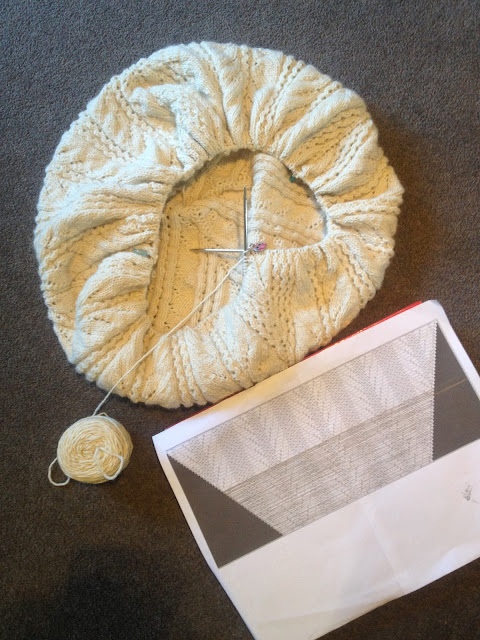 Can't wait 'til it's finished!  It'll look fabulous once it's blocked, and then I can move on to more projects, like this one, or this one.  Oh, this baby will be drowning in hand knits...

Although, I'm itching to cast on a cardigan or two.  Having gone through my wardrobe of knits for the winter, I've come to the conclusion that I don't actually like the necks on two of my jerseys (square and envelope collars), another one is too itchy (possum/merino blend), so that leaves me with my two favourite cardigans, and the lovely soft teal cardigan.  Others have been given away, or wrecked in some way (felted, got a hole that I never quite got around to fixing).  Yes, it's definitely time for new hand knits.  I'm thinking a Rocky Coast or Tinder...

As expected, spring cleaning (er, winter cleaning) is going slowly but well.  I've cleaned the entire downstairs from top to bottom (literally), and now just have the upstairs to do.  We won't mention the outside...  But today?  Today, my SIL and I will be watching Duck Dynasty :)  Have a good week!

I had a goal this year of beating last year's time.  I had a slightly more ambitious goal of placing in the top three for my age group.  I didn't quite manage it, but I came close - 4th place.  Oh well...

It was warmer this year, by about 4°.  The sun came out to play for a while, but then it went back into hiding.  From about 1pm onwards it started getting really chilly.  Although the official temperature was about 12°, the wind chill factor was biting.  One good thing about it was that it blew away all the bugs in the cow paddocks, so we didn't have to run with eyes and mouth closed through that section like we did last year.  That was challenging.  And gross.

The race itself went relatively okay - it started off pretty well.  From about the 10km mark I knew my stomach was going to cause issues - I've been eating quite a bit of gluten-based food lately, including a bagel for breakfast.  It was coming back to haunt me :(  The first hill climb was challenging, but the views were spectacular and the downhill was the most fun I've had in ages.  There wasn't too much mud, so the trail wasn't slippery.  I was flying, and it was awesome.  But as we know, all good things must come to an end, and there was another uphill climb ahead.  I haven't seen the splits yet, but I'm pretty sure the second climb was slower than the first - more walking ;)  I was also disappointed to find that there were no marmite and chip sandwiches at the top.  The prospect of that sandwich was one of the reasons I had decided to do the run again.  Turns out they'd misplaced the marmite (Martin found it later, buried at the bottom of a shopping bag).  To be honest, I probably wouldn't have eaten one anyway given that my stomach was playing havoc, but it would've been nice to have the option.

The photographer (Allan Ure from Photos4Sale) was being cheeky and positioning himself at the top of hill climbs.  I know it was because that's where the good background views were, but it certainly makes you work.  Running up hills is hard!  So I gave him a bit of flak for it: 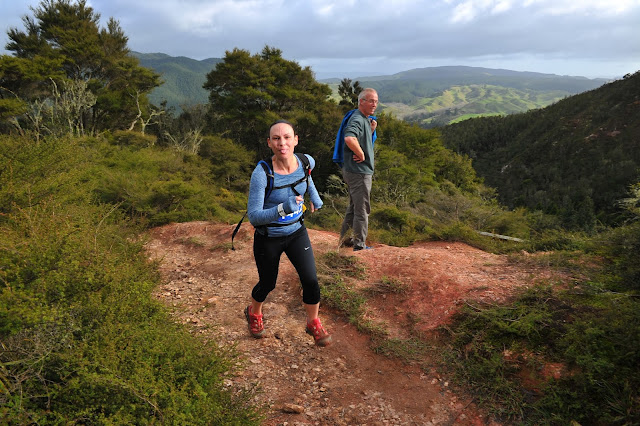 I have no idea who that other guy was.  Guess he was just enjoying the view.  And ruining my photo... 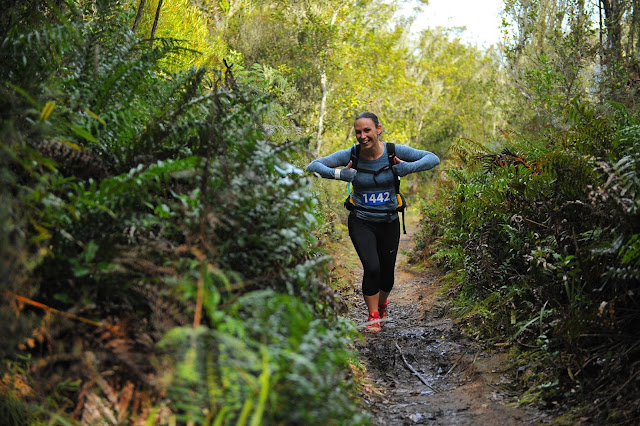 Hey, you caught me walking. 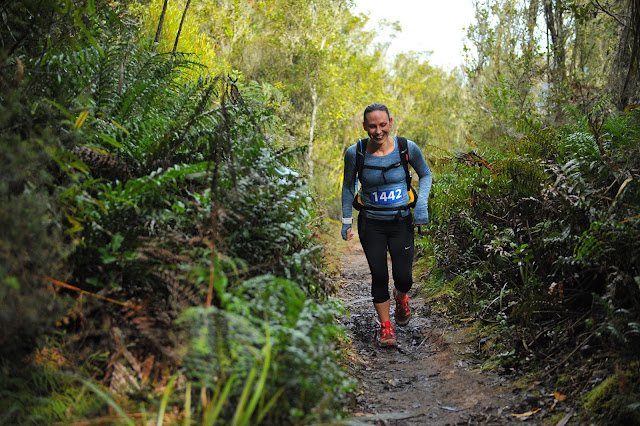 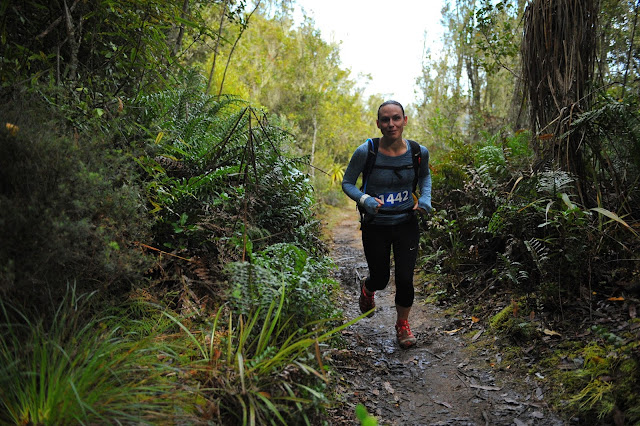 What? You want me to run? 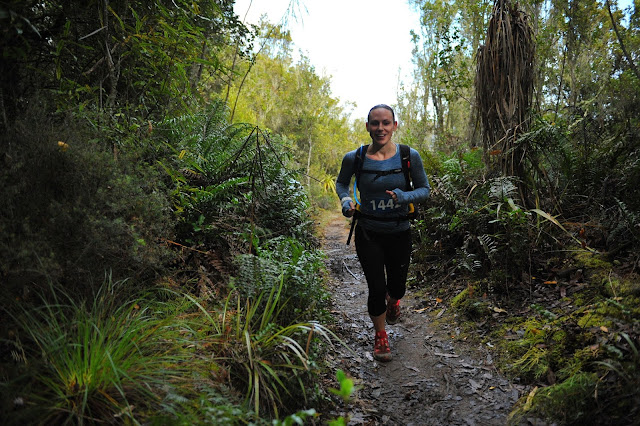 Okay, I'm running. We good?  Great. I'm totally walking again once I get past you...

The home stretch was a little slow-going.  My tights, clearly designed for those blessed with thin legs, were cutting into my legs a little at the bottom cuffs.  My shins swell a bit when I run (yay shin splints) and by the time I'd finished my second climb and was heading back down, it was causing me some grief in my left leg.  The next day I had bruising and a big lump on my left shin where they were digging in.  Guess I'll be wearing them for short runs only from now on...  That'll teach me to wear new running gear on race day. #rookiemistake

I was going to try and finish in three hours, but had to adjust my time goal significantly with the day's little upsets.  Although slightly disappointed with my finishing time, I was happy to have cut nine minutes off last year, and move up a slot on the finisher's list. 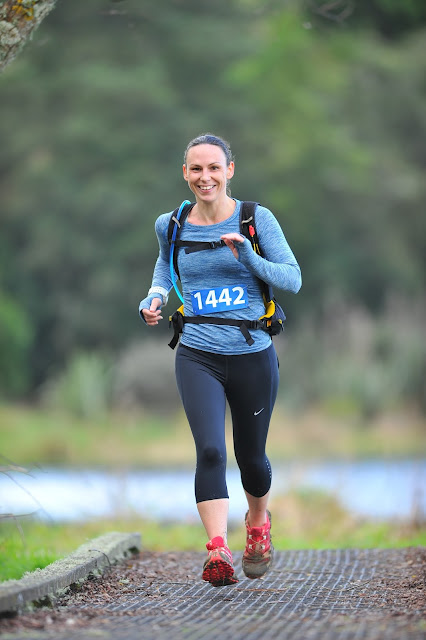 Yay, finished!!  My shoes are covered in cow poop, but I'm finished.

My official time was 3:22:12.  I was very happy to find that they had warm pumpkin soup and vegetarian sausages as well as the usual meaty offerings for the runners afterwards.  And of course, beer.  We hung around for the prize-giving, and Martin won the last spot prize of the day - 'All You Can Eat Turkey', aka free entry into Lactic Turkey events for a year.  Lucky guy ;)  My friend Rob came second in his age category, which was pretty cool.

We arrived home at the very reasonable hour of 6.30pm, so the day wasn't as long as last year.  I'd set the alarm for 5am and we were on the road at about 5.30am - last year we were super early.  No need for that!

In other news, T headed off to Year 6 camp this morning.  He won't be back until Friday.  I'm going to miss him! 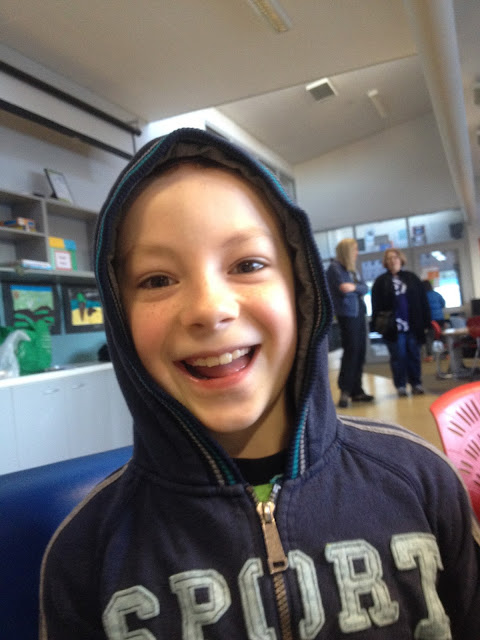 I've started knitting a lovely blanket in the most squishable yarn ever - Malabrigo Worsted.  YUM!  I ordered it online from Knitnstitch, and it arrived the next morning.  Gotta love speedy service :)  The pattern is Norma, and the yarn is Malabrigo Worsted Natural, which is a lovely creamy white and soooooo soft.  It'll be for a much-awaited, long-planned baby of some close friends.  They're not finding out what they're having, and prefer 'classic' colours, so I'm playing it safe.  So far this is a pretty fun knit - the chart is easy to follow, albeit rather large.  I've nearly finished the first (smaller) chart, and should move on to the large one by tonight.  It takes up two pieces of A4 paper.  Neat. 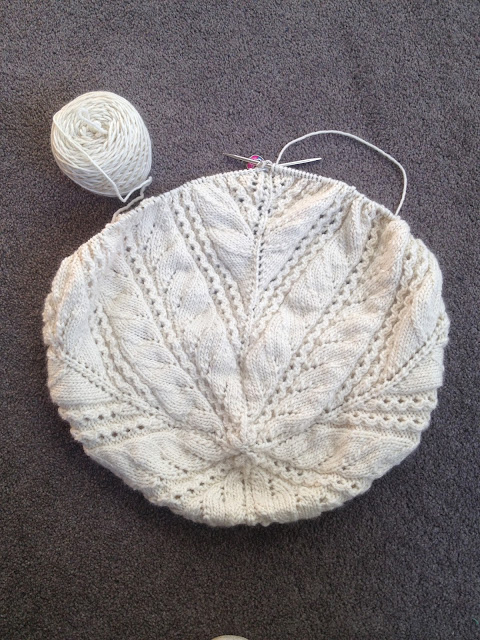 Square blanket on a round circular

We enjoyed a good couple of runs recently - hill repeats on Mt Eden on a foggy morning: 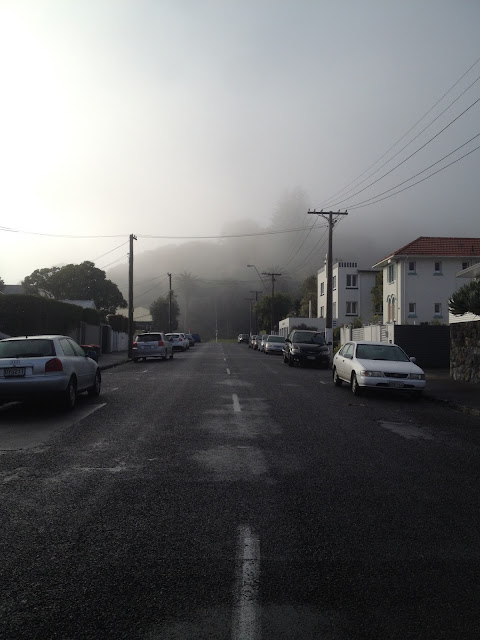 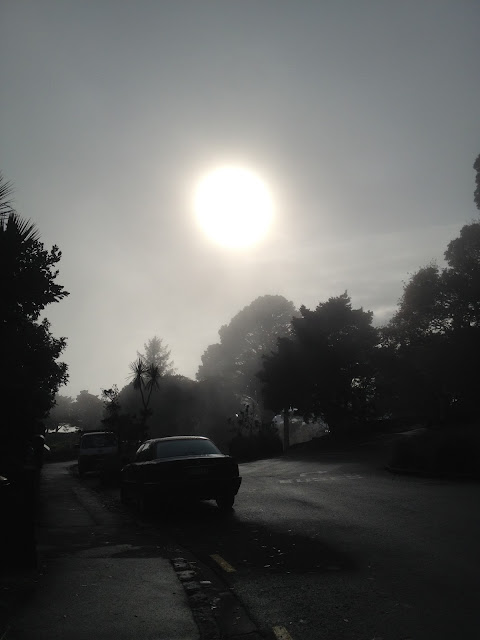 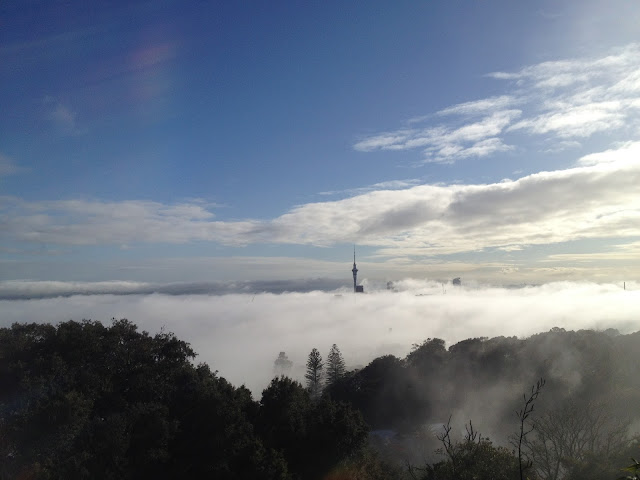 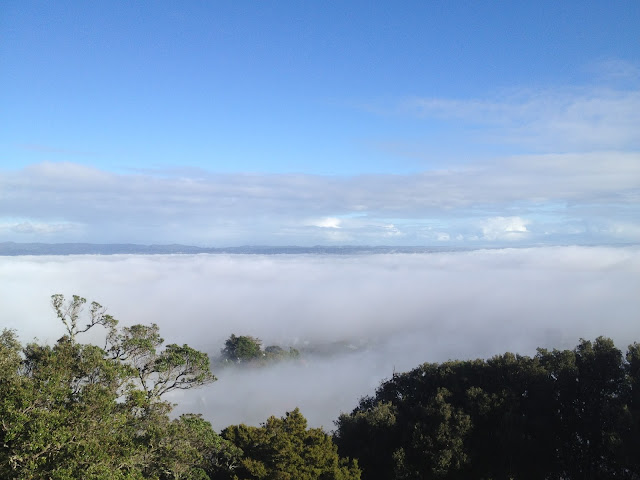 And a four-hour Monday trail run in the Waitakeres: 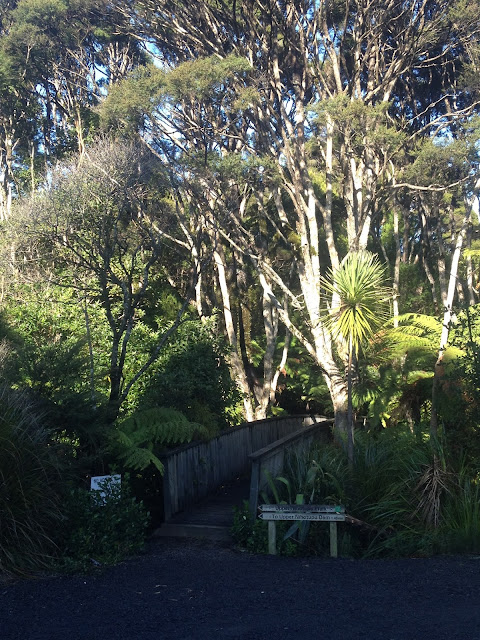 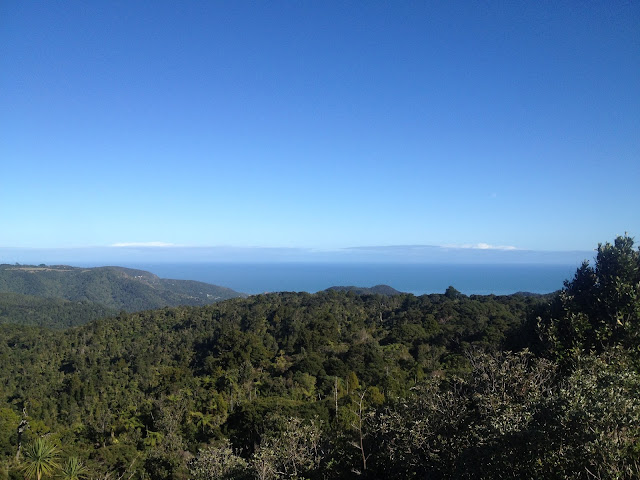 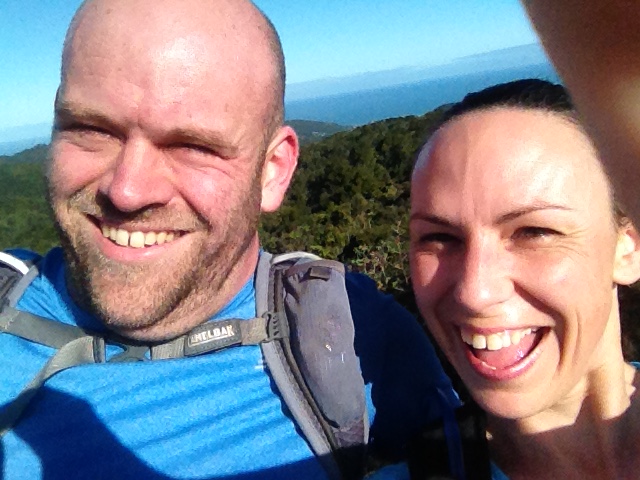 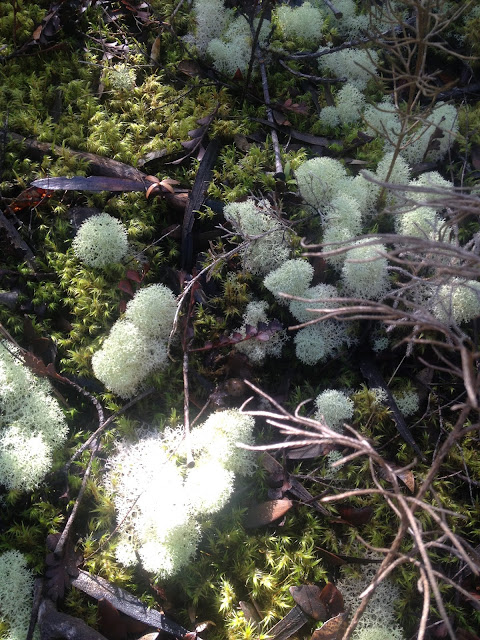 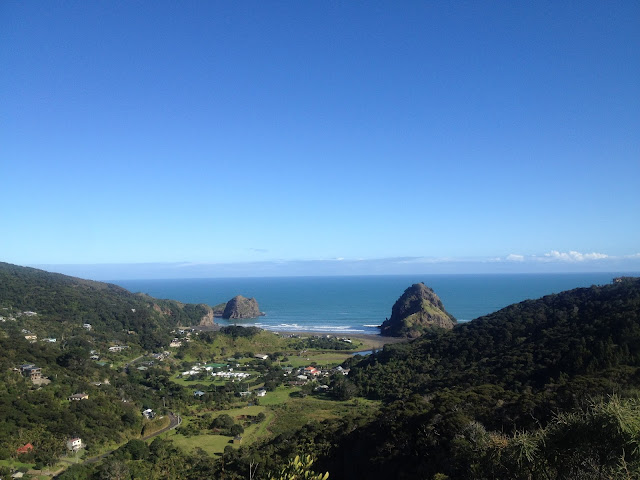 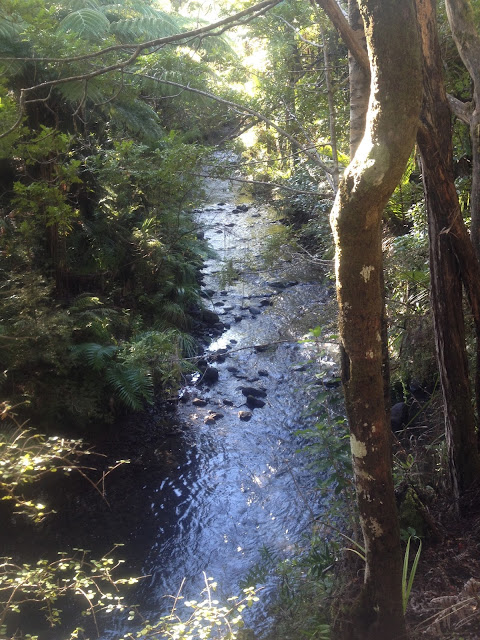 With a few weeks to go before the next round of study begins, I'm taking the opportunity to thoroughly clean my house from top to bottom, one room at a time.  It'll be slow going, but it is sorely needed, so I better get stuck in.  Today, the dining room and downstairs hallway.  Tomorrow, the lounge!  Have a good week :)
Posted by kreachr at 10:23 No comments:

Things that make me smile 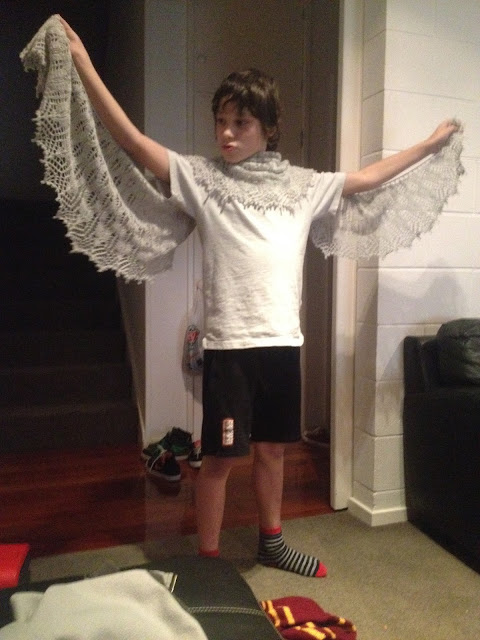 T, snuggling up under the crochet blanket I've been working on recently.  Excuse the mess... 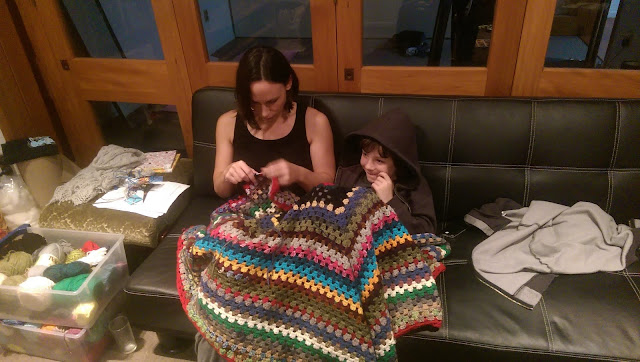 Coming home from a three hour trail run to discover my family have made me vegan chai spice snickerdoodle cookies (from the Isa Does It cookbook I've borrowed from the library for about the fourth time). 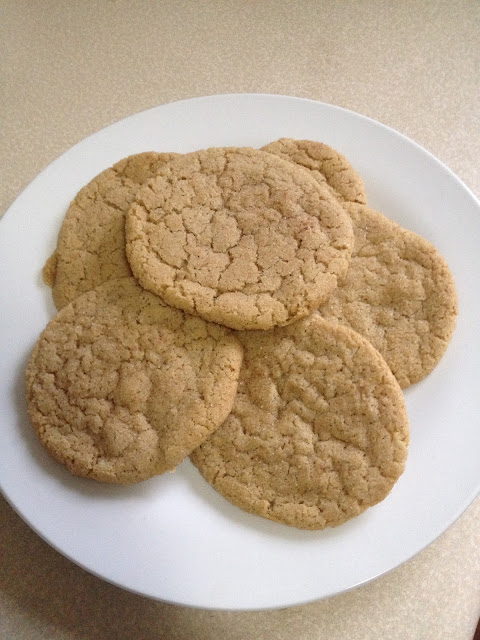 Procrastinating about study by baking my own cookies - jumbo oatmeal and raisin (also from Isa Does It.  I NEED to buy this cookbook).  They were really, really good. 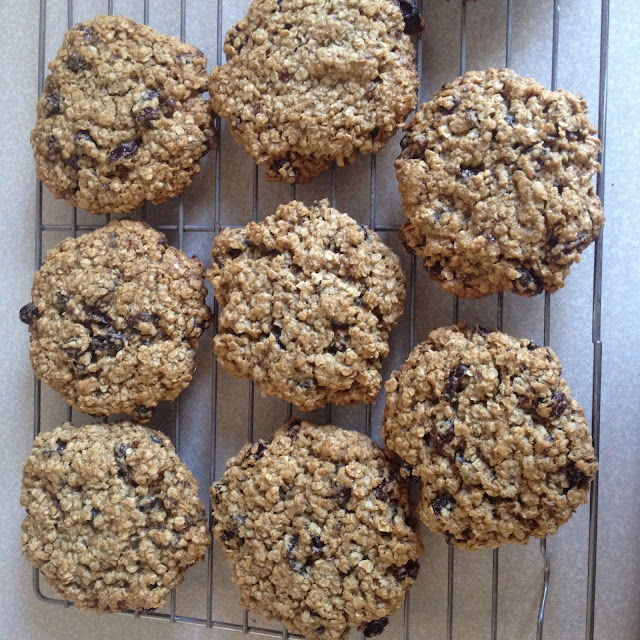 Eating the best vegan burger I've ever had at Vinyl Coffee Shop on Dominion Road.  It was so good, I hugged the chef. 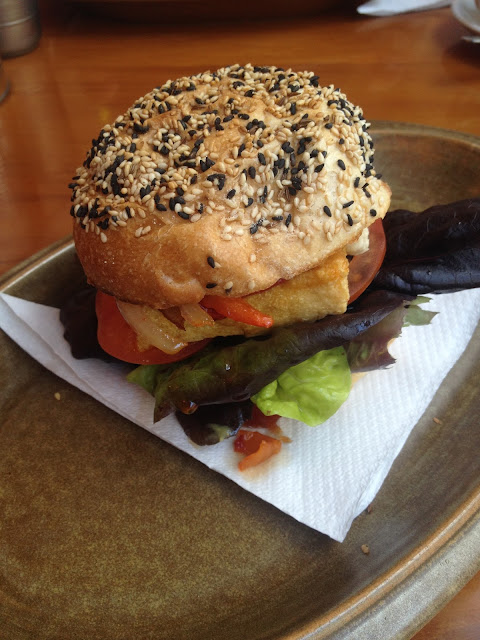 Getting my running mojo back, and managing to dodge the downpours.  This morning's run - here comes the rain again: 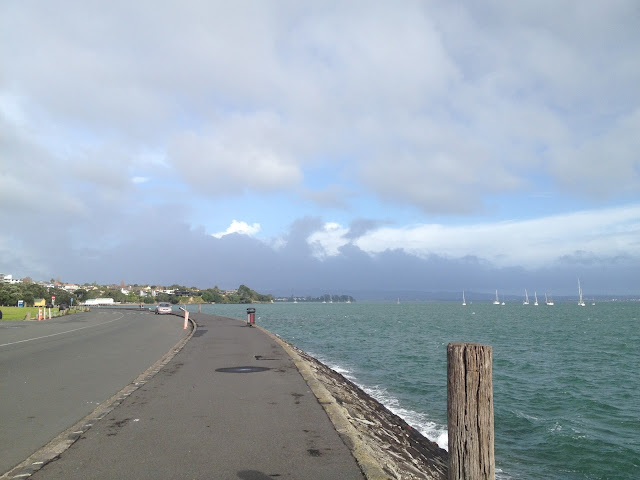