Knitting: It's what school holidays are for, right?

We are now into the second week of the school holidays and while that's great for the boys, it makes my first week back at studying a little challenging.  However, I managed to power through the required course work in the first two days (go me) and the rest of this week will be dedicated to running, yoga and knitting.  I wanted to get all my spring cleaning done before the trimester started, and although not completely done, I managed about 95% of it - I still have our bedroom to do.  I'm pretending the gardens don't exist...  I have managed to get quite a bit of knitting time recently, which has pleased me immensely.  (Hi Margaret!  Yes, I'm still knitting, don't worry!).  Here's a wee roundup of FOs for you: 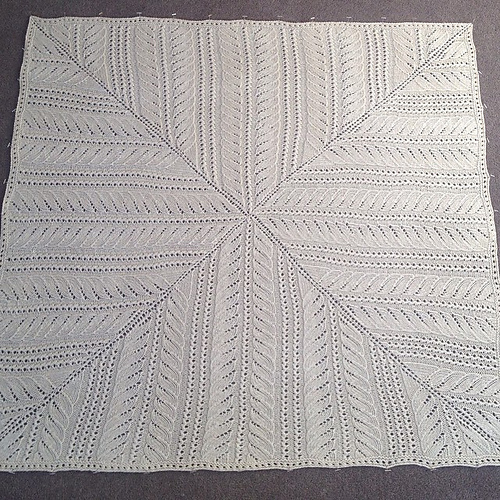 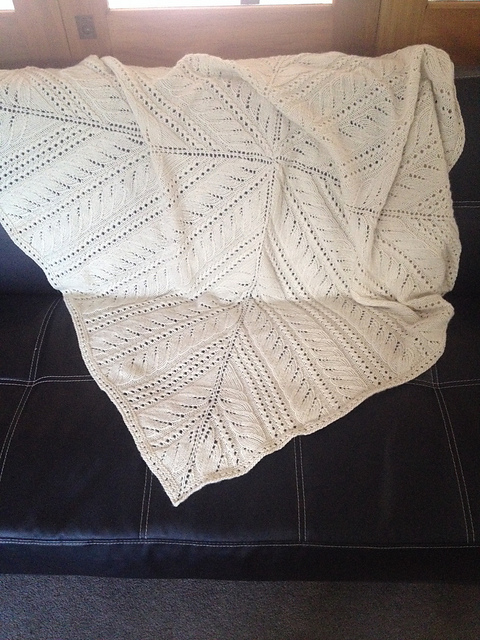 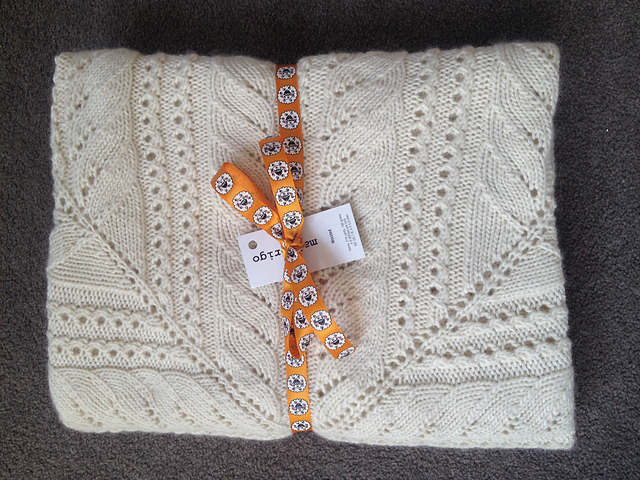 The Norma blanket, knit in Malabrigo Worsted (undyed) - I knit the largest size, which used the full charts to row 82 (the pattern on Knitty says to stop at row 32).  It used less than seven full skeins, so I still have a bit left to make a matching little something for the baby (maybe an Aviatrix hat or something).  I love this blanket!  It was such a fun knit, and it is so squooshy soft I almost want to keep it. 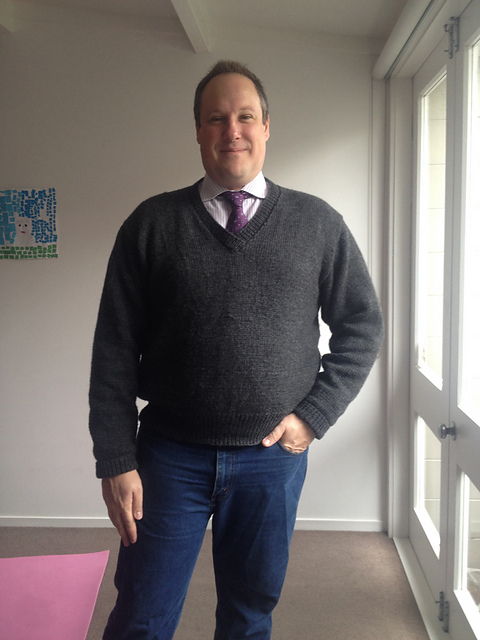 I knit Deane a new winter sweater.  It's from a WWII-era pattern which is pretty cool - the original pattern book has been restored and can now be uploaded in pdf form, or accessed online.  Pretty neat, huh?  I knit the largest size (44" chest) with Drops Alaska worsted yarn in dark grey, and used about 20.5 balls.  The last sweater I knit Deane, while not a complete disaster, wasn't exactly a complete success either - the ribbing is atrocious and looks terrible.  That one took me a while to knit as well, if you include attempt #1 which ended up being frogged (because I used two different-sized needle tips, duh) - like, a year.  Oops.  When the idea of knitting him a new one was discussed, he gave me a bit of flak for that.  So of course, reverse psychology being what it is, I knit this one in less than two weeks.  Again, I wouldn't call it a complete success - it's a little on the short side (I blame the belly... ahem...just kidding ;P).  Other than that its pretty good.  Deane likes it and he has to wear it, so I guess that's the main thing.  I certainly have ideas for the next one though! 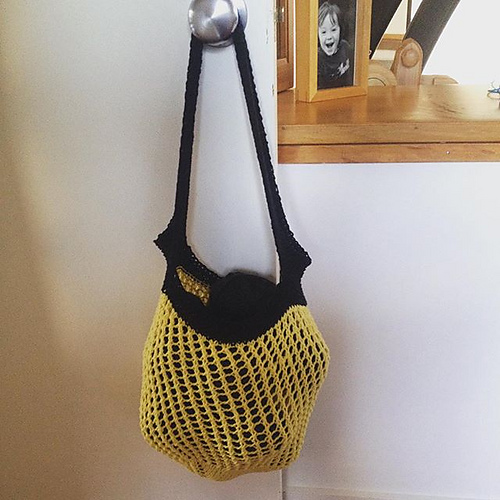 To break up the monotony of knitting so. much. dark. grey. stockinette, I worked up a little market bag in some DK weight cotton yarn I've had in my stash since forever ago.  I used up all the yellow I had left and needed a different colour for the handles, and the only other colour I had was black, so this bag has ended up being accidentally Hufflepuff :)  I think it's cute, if a little on the small side - I was restricted with the amount of yarn available.  I might make some more in the future if I can get DK cotton on sale, and will use larger needles for the mesh part of the bag to make it bigger, as well as including more pattern repeats. 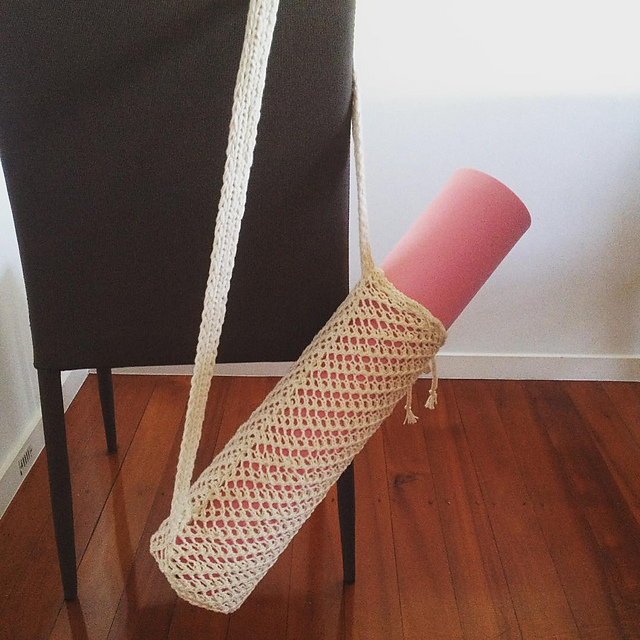 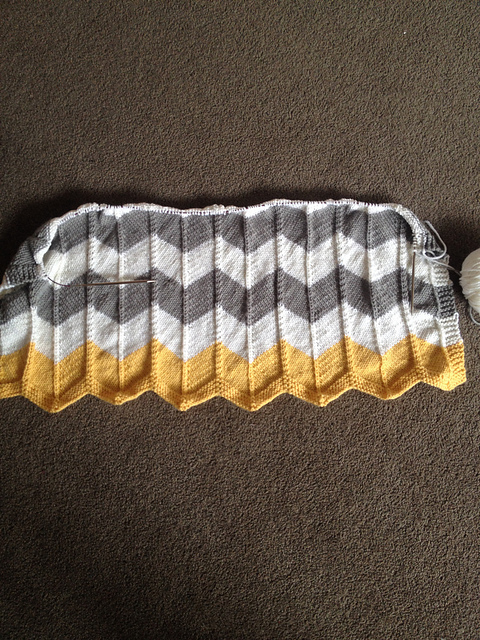 And finally, the current project on the needles is another baby blanket.  This one is a lovely chevron striped blanket.  I've modified the pattern slightly by adding extra pattern repeats to make it wider, and have included extra stitches on each side for a garter stitch border, as well as some garter stitch rows top and bottom to prevent the edges rolling.  This is being knit in Debbie Bliss Cashmerino Aran, and is another super squooshy soft blanket.  OMG this kid is going to be drowning in soft hand-knits!  If I had the choice I'd make it much more colourful, but the mum-to-be prefers pastels and won't be finding out the gender so I'm pretty limited.  Okay, so these colours aren't strictly pastel, but that's about as much as I'm willing to budge.  At least until we know what the little bubs is going to be :)  I'm quietly very excited about this new arrival, and have many knits planned (as well as some other little projects).

So as you can see, I've been pretty busy with the craftiness.  The next project on the list is either the Rocky Coast cardigan or the Tinder cardigan.  I have the yarn and patterns for both ready to go, so it's just a matter of making a decision.  I may need to flip a coin...
Posted by kreachr at 15:31