Apparently reining in my excitement is not something I'm very good at.  Seedlings are being transplanted, new seeds are being sown, tepees are being built in anticipation of plant growth, and although Frank and Ethel are going great guns, I decided we also needed a compost bin so now I have one of those too.  I think gardening, for me, has done a bit of a flip-flop and landed firmly in the 'does not suck' category.  Perhaps it is a little too early to cement it in place there, but I'm optimistic.  Maybe it's just a matter of having the right attitude towards something that makes it either enjoyable or a chore, but right now I'm having great fun learning stuff and growing things.

Our feathered friends have found the bird feeder, and have managed to mow through a kilogram of bird seed already.  Not to mention completely covered the flax bush in poop...  Ah well, trade-offs.  The plants in my front garden are still in the early stages.  Some are incredibly tiny and you have to look really close to see them, and I think that may have a bit to do with the lack of sunlight.  It's been mostly clouds and rain of late, in typical Auckland Spring fashion - but it's looking good I think: 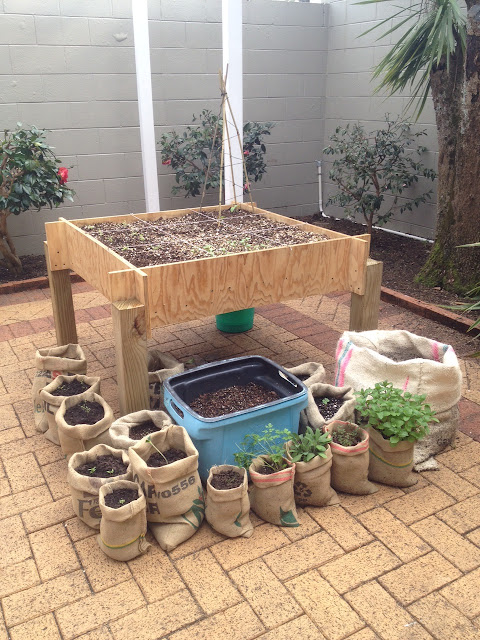 The coffee sack planters are multiplying!!

Things that are still inside in seedling trays (sprouted/growing):
Sweet corn, soybeans, more mesclun salad mix, capsicum, and one white flowered kakabeak plant that we were given seeds for from Deane's aunt, from her existing tree.

Things that didn't sprout (or I accidentally mangled) that I had to re-sow:
Spring onions, NZ spinach, lavender, basil.

Mwaaaaahahahahahahahahahaha!!!!  ALLLLLLLL THE VEGETABLES!!!!!  And some herbs and companion plants, and some berries :)  In case anyone was wondering what I mean by ball carrots, they're actually called Parisian Round Carrots, but I just call them ball carrots for simplicity's sake.  Also, I know things like beetroot, broccoli and cauliflower are traditionally winter vegetables, but I got summer varieties, so we're all good ;)

I go out and check on my wee plants several times a day just because, and I like to go out on nightly slug hunts.  I head out with my little torch, a skewer, and a container; if I spot a slug it gets transferred to the container, then relocated the next morning to somewhere far from my garden.  They were ravaging Deane's Russian tarragon plant so I had to surround it with crushed egg shells.  I've also smeared Vaseline under the rims of the planters on the deck as an extra precaution, although they appear to be leaving my strawberries alone so far.  I'm not yet at the point of wanting to lure them to their deaths with beer - I quite enjoy the hunt ;)  That may change though, once I've planted more slug-attracting plants like the broccoli, cauliflower, etc.

Frank and Ethel are doing fine, and there is evidence of population expansion (worm eggs!).  I flushed the worm farm with some water earlier this morning, and naturally there were a couple of worms in the bucket afterwards.  I fished them out and deposited them back in the farm.  After a while it occurred to me that if there were worms in the bucket that had drained out, that means there's probably more in the collection tank.  Panic!!  Off I went on a rescue mission - I lifted the working tray, fished out about 20 or so worms that had found themselves stranded in the collection tank, and redistributed them back in their home.  Thankfully, none had died.  In future I'll remember to check the collection tank after flushing :)

I'm rather enjoying this new hobby of mine, and can't wait to start harvesting veges in the next month or so.  My seed collection is already taking up three jars in the fridge (Veges A-M, Veges N-Z, and Flowers/Herbs.  Yep, I'm a nerd), and there's still so much I want to try out.  Patience isn't really my thing, but I'm working on it.  Next on the agenda, building bird netting/wind break shelters, and getting Deane to build another square metre garden for the sweet corn and soybeans that will need transplanting soon.  Exciting stuff!!

In other news, marathon training is going well - next week will be getting into the 20km+ long weekend runs (this weekend was 19km).  Deane's marathon training... is not going so well.  He will most definitely be walking, and possibly not the full marathon.  Oh well.

Study is cranking along okay, although I'm really looking forward to finishing these papers in late October/early November.  Project management is definitely NOT my forte, nor is policy planning and writing.  Too many big words that require high levels of concentration to translate into plain English.  Ugh.  One day at a time, I will make it through.  Second assignments are looming...

Still loving yoga, but am not managing to get there as often as I'd like (the aforementioned marathon training and study is sucking up a lot of time, not to mention the current gardening obsession).  Hip and shoulder flexibility is still a bit poop, but hopefully I'll be able to get into daily practice once these papers are finished and will be able to work on that more.

Okay, I'm blabbering now and y'all are probably bored (if you've managed to read this far down, that is) so it's time to sign off.  Kids are doing well, and looking forward to holidays in a couple of weeks (wow, that came up fast!).  X is officially enrolled for high school next year (OMG!!) and has camp next term.  T has testing for intermediate next term (again, OMG!!) and is having a really good year.  I think that covers everything, so I'm going to say bye for now, and go have a nap, check my plants again, read a book or knit something.  Until next time...
Posted by kreachr at 17:08